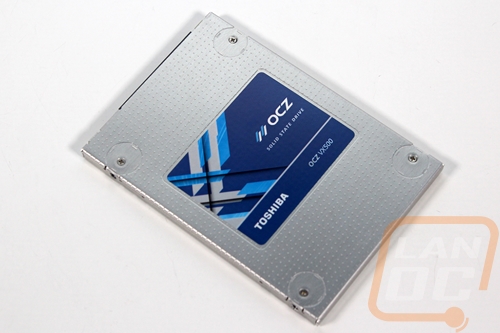 When it comes to SSDs most people these days are starting to focus on NVMe drives or at least M.2 drives. There is still interest and need for SATA drives as well though. A lot of the SATA drives have been focused on cheaper TLC based NAND but there is still a need for MLC NAND and that’s where the OCZ VX500 that was introduced last fall has been hanging out. It’s designed as a replacement for the OCZ Vector 180. They have dropped the Barefoot 3 controller and moved to a Toshiba based TC358790. That combined with the MLC NAND has me excited to finally take a look at the VX500 and see how it performs and where it fits in today’s marketplace.

If you haven’t been paying attention to the storage market for a while now you might be a little surprised to see that Toshiba logo on the front of the box for the OCZ VX500. Toshiba picked up OCZ and are now using it as a performance brand as an extension to their Toshiba branding. That said, beyond that the packaging follows the same OCZ theme we have seen for a while now. Blue is their color and they use a few different shades on the packaging along with an actual photo of the drive right on the front. We don’t see this enough, I love being able to see the actual product that you are getting with a window or a photo. Beyond that, the capacity is a sticker up in the top right corner and then the OCZ VX500 branding is in the bottom right corner. 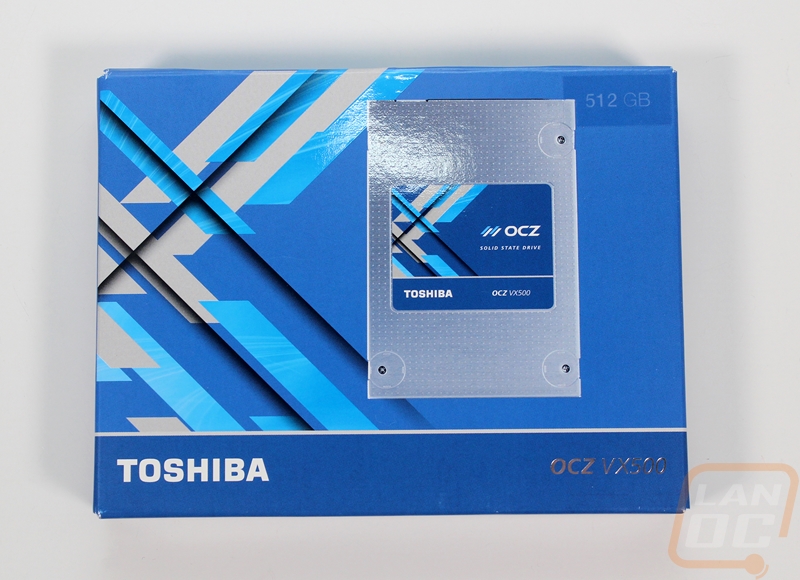 The back of the box doesn’t have too much going on. They mention the compatibility including the size and the interface (SATA 3). They mention that it uses Toshiba MLC NAND, has TRIM support like any modern SSD, it includes a free copy of Acronis True Image HD, and they also have the 5-year warranty listed. 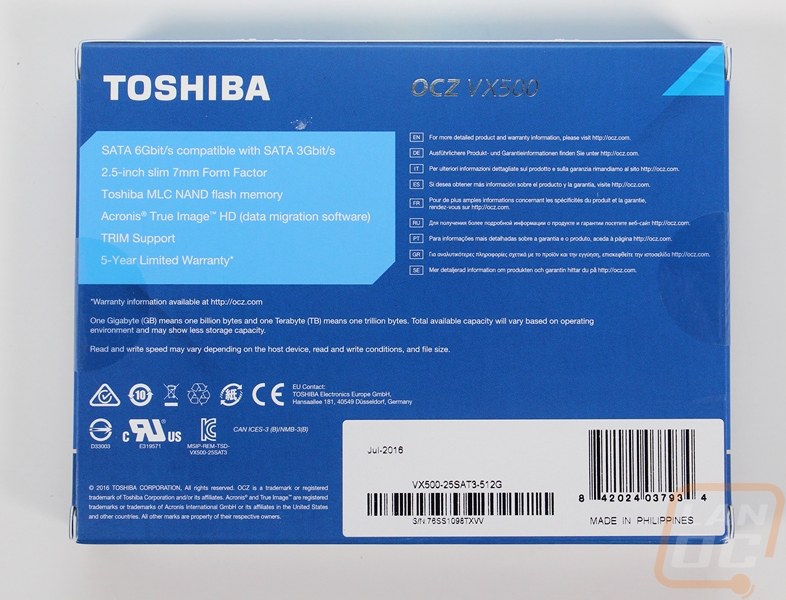 Inside the drive comes in a plastic tray and along with the drive you get a few different papers. You have one with information on the included True Image software with the product key on it. You have a small manual and information on support and RMA should you need it. 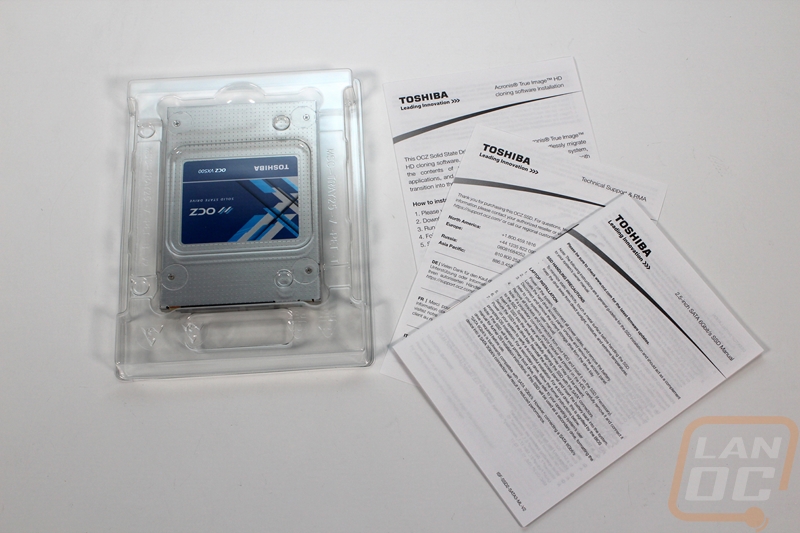 One of the things that OCZ has always done well is come up with unique looking SSDS and the VX500 is no different. They went with a thin aluminum casing with a weird dot pattern stamped into it. So while they moved away from the nicer machined aluminum designs of the past they still managed to not do the boring basic black design that a lot of SSDs have. The case isn’t completely unique, though, Toshiba did also use it with the Q300 Pro, another Toshiba TC358790 based SSD. 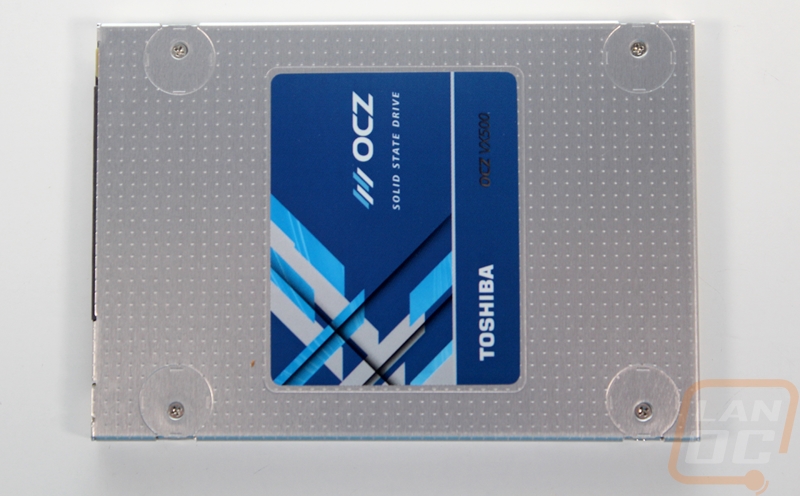 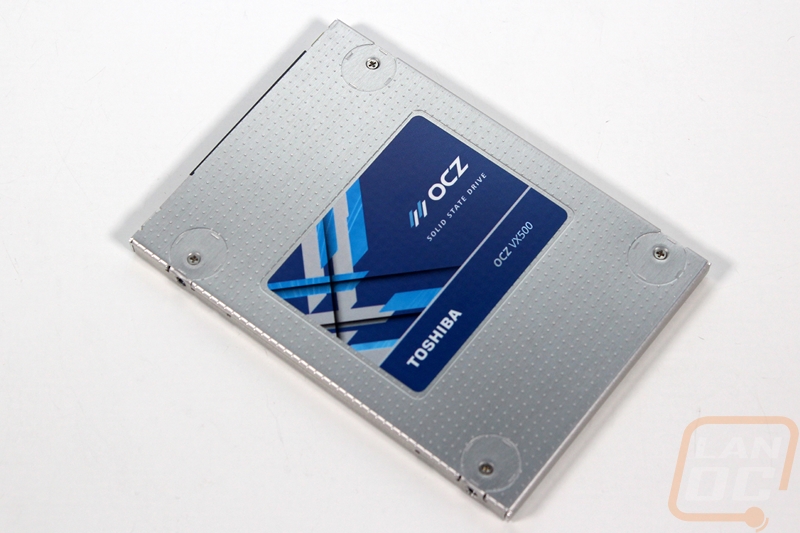 The back of the drive has most of the main information. Here we have the capacity, the model number, and even your serial number. Then, of course, there are all of the various certification logos like always. 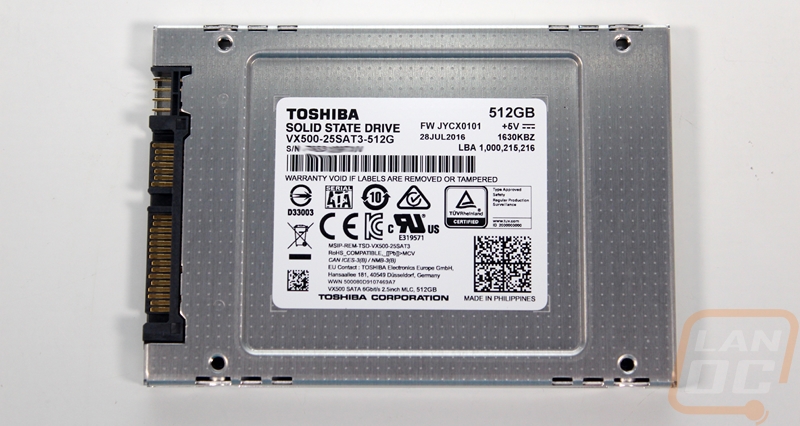 At 7mm thick this isn’t a very thick drive, even for an SSD. The aluminum casing also helps keep it extremely light at just 52 grams for the 512GB model that I’m testing today. As for the interface, it is just a standard SATA 3 with your normal power and data connections.

Even though they went with a basic sheet metal casing, at least they didn’t use a snap together design. Snap together cases are always a pain to get open. The case has four screws holding the top plate on. For warranty reasons they did put a transparent sticker over one of them that you will have to remove if you want to get inside, not that you should void that nice 5-year warranty. Once you get inside you have to remove four more screws that hold the PCB in to get a look at what the drive has going on. 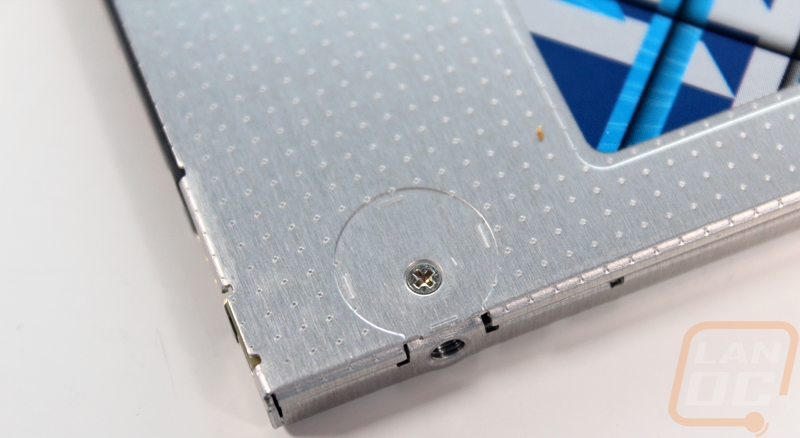 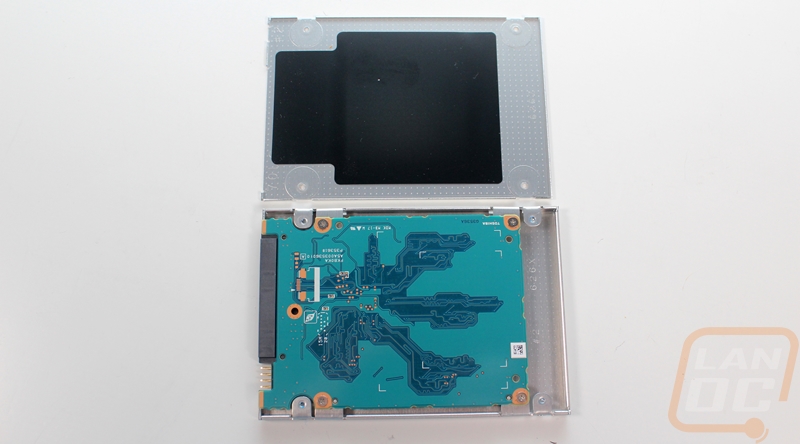 Once finally into the SSD, I was really digging that they made sure to use a thermal pad on every single chip on the PCB. A lot of times you just see one on the controller and that’s it. 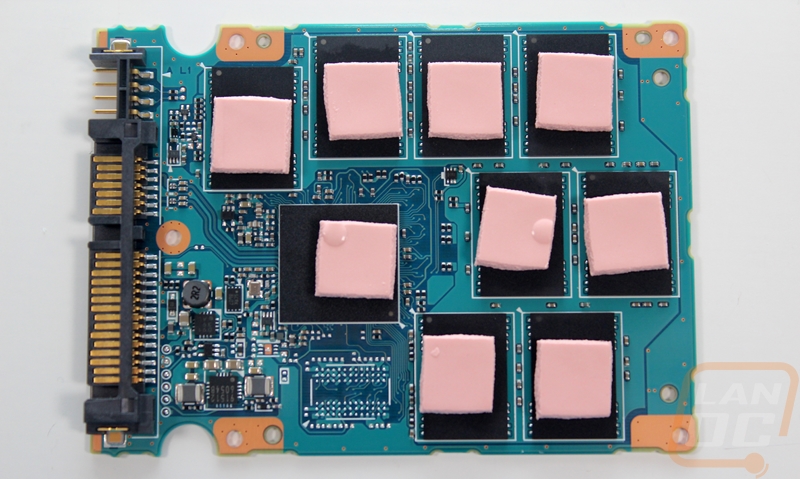 With the pads pulled off, we have a better look at what makes the SSD tick. 8 of the 9 chips on the PCB are NAND packages. The NAND is Toshibas 15nm MLC with a model number of TH58TF69DFLBA8C. Then for the controller, the VX500 has the previously mentioned Toshiba TC358790. Oddly missing is any DRAM, there is a location for it but apparently, they only add it on the 1TB model. The controller then relies on its on-chip SRAM for the lower models with room to expand on the high capacity 1TB drive. 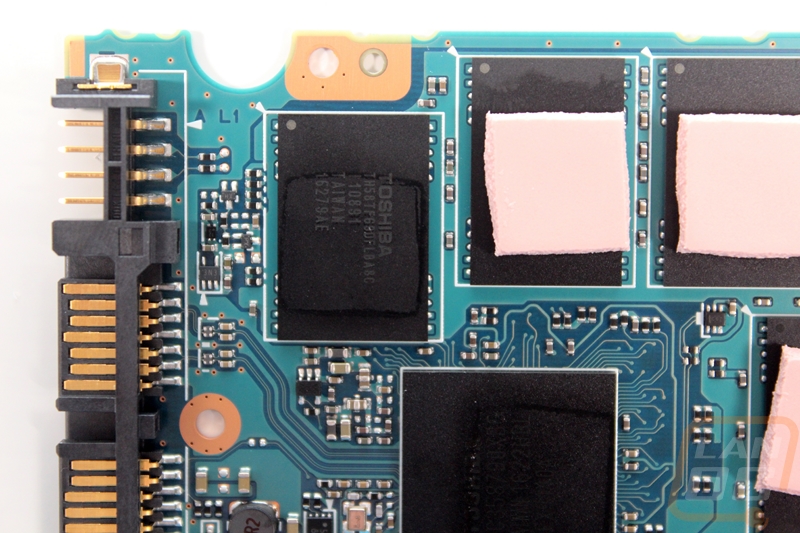 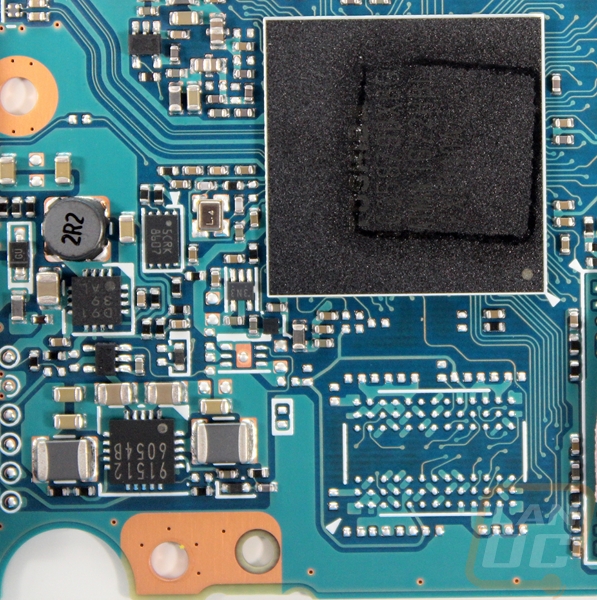 On the back side of the PCB Toshiba has decided to not take advantage of the extra space as well. This means there are just a few leads running across the back and there isn’t any room to expand capacity from the 8 NAND configuration. 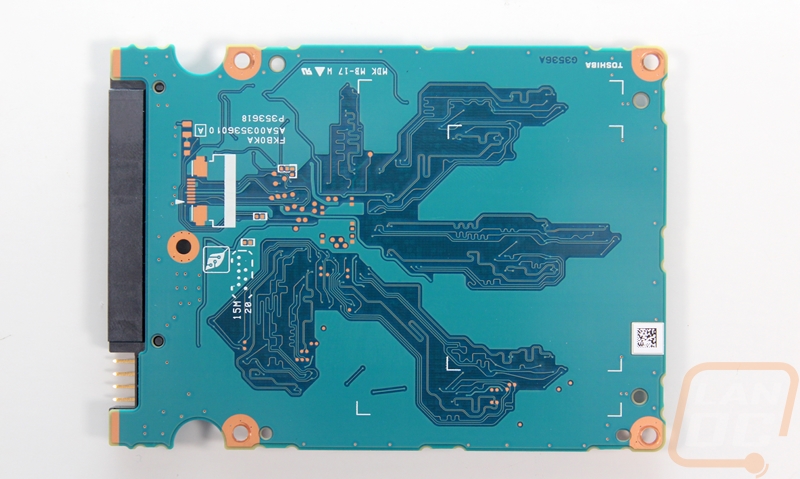 As always to start off my performance testing I started with CrystalDiskMark. Focusing on just the sequential queue depth of 32 at a block size of 128KiB. I do this with both read and writes. For reads, the VX500 comes up close to the top of the charts with just the 3D NAND based SU800 ahead of it. For write speeds, the numbers are a little less impressive with three Phison S10 based drives all ahead of it. 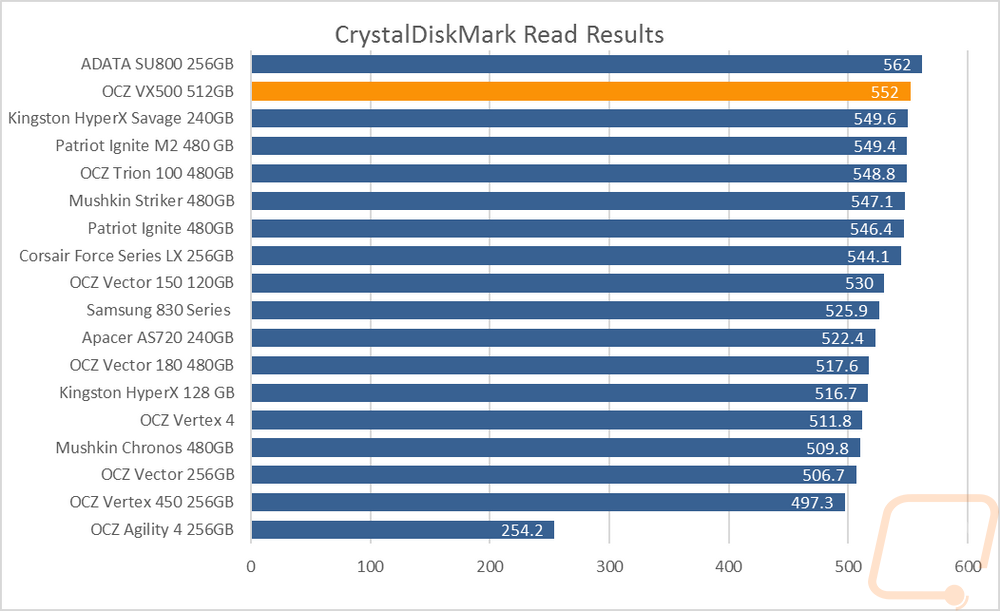 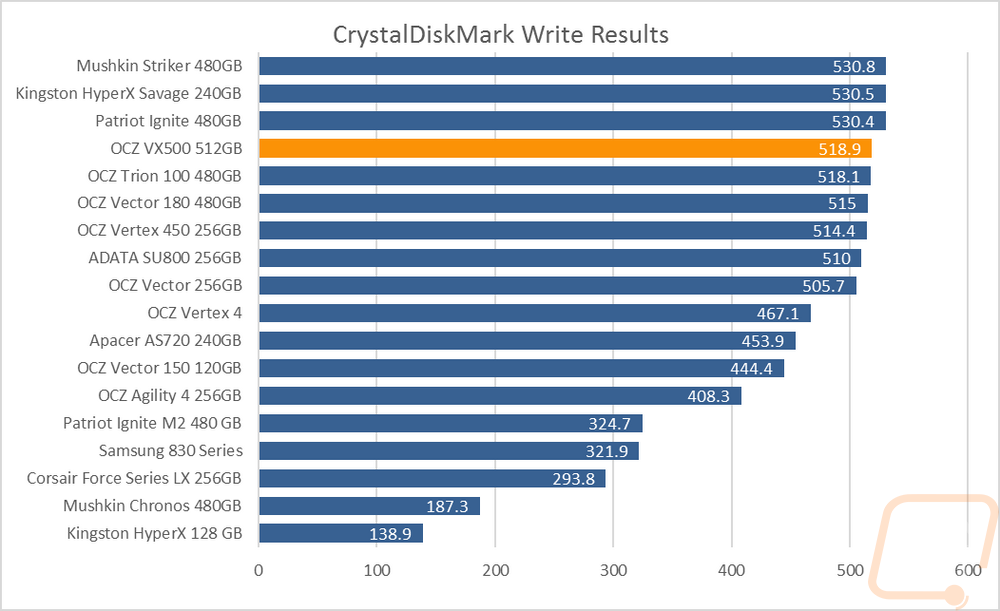 Next, I test using AS SSD using the Copy Benchmark that tests transfer speeds when copying three different file types. Here the VX500 performed well with none of the results being the fastest, but all three being higher than average making for a good overall result. 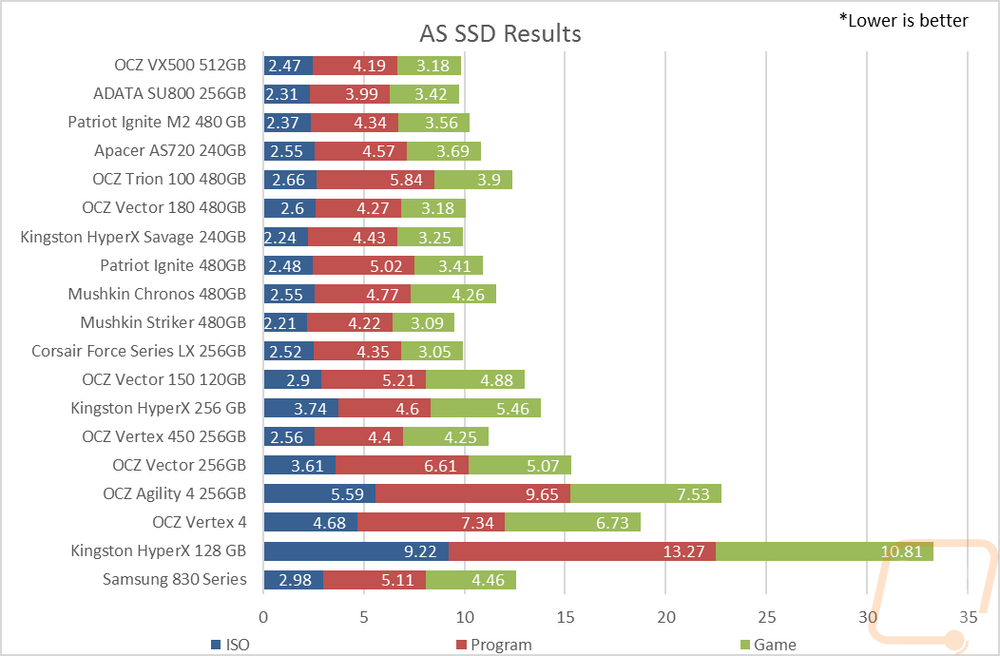 Using the advanced disk benchmark inside of Passmarks Performance Test I tested the VX500 in simulated benchmarks of workstation, web server, file server, and database server load types. These are mostly irrelevant for anyone using the drive in a normal PC with the exception of the workstation workload, but it is nice to know how I would perform in all situations. Here it came out as one of the fastest drives in the workstation workload, the fastest by a large margin in the database workload, and was fast but not near the top in web and file server workloads. 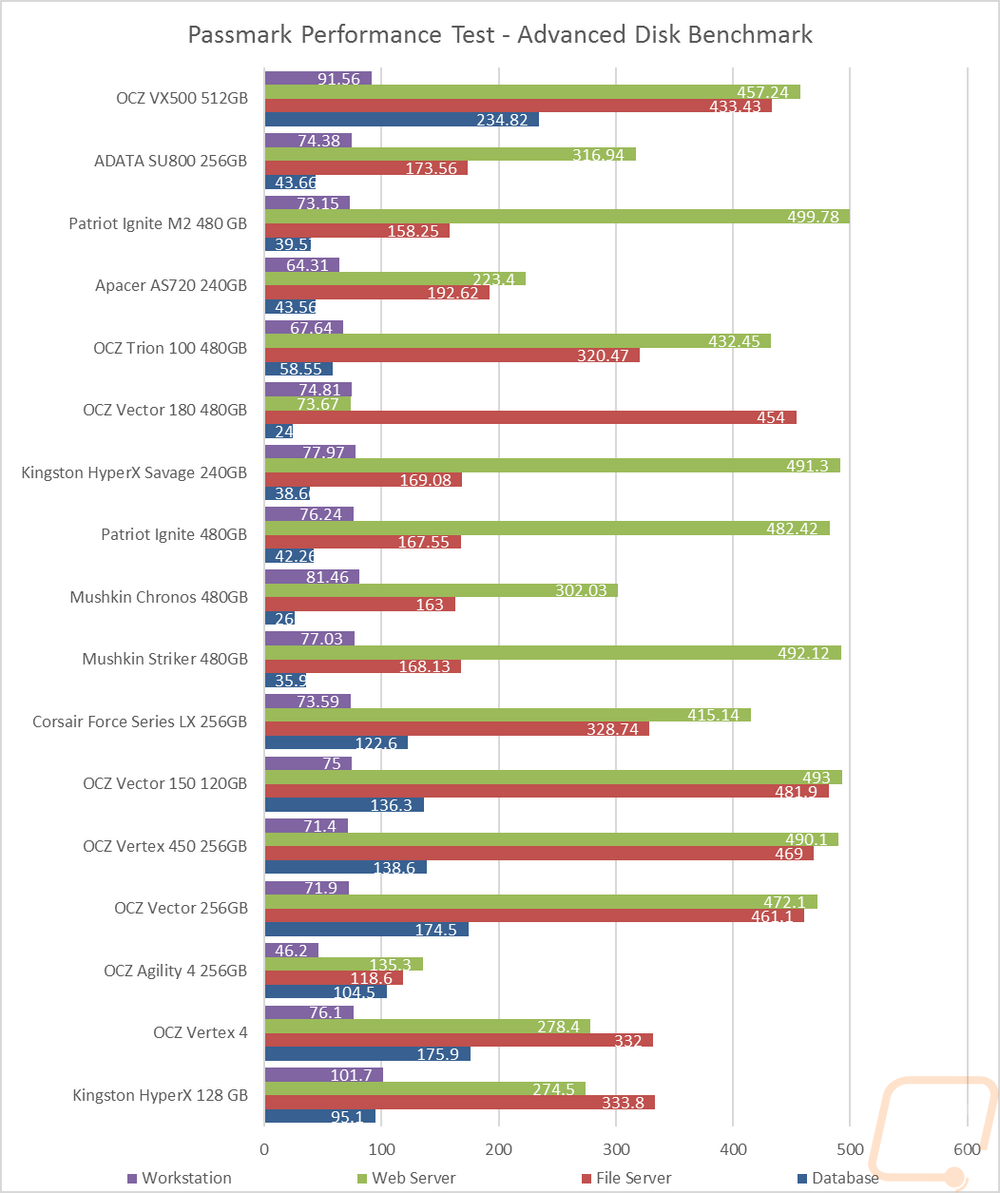 For testing closer to real world I used PCMark 8’s Storage benchmark and Passmark Performance Test 8’s storage benchmark. In PCMark 8 I focused on the overall average bandwidth that the drive sustained during all of the various everyday tasks like web browsing and word processing. This made for a very impressive 299.97 result that is significantly faster than the other drives tested. In Passmarks Performance Test 9 I used the overall score. This is a new test for storage reviews so I only had the SU800 and the VX500 to compare but the VX500 did extremely well with a 346 point lead.

I then jumped into Anvil’s Storage Utilities to check out IOPS. Here I ran the full benchmark but I am only focusing on the 4K 16 queue depth results from both the read and write sides. Here a higher number is better and I combined both results to get a good idea of overall performance. When combined the VX500 is near the middle of the charts but its read speeds are second only to the OCZ Trion 100 of the drives I have tested. The write speeds weren’t too bad but with a few of the Phison S10 drives once again being much faster with write speeds it drops the VX500 in the combined results. 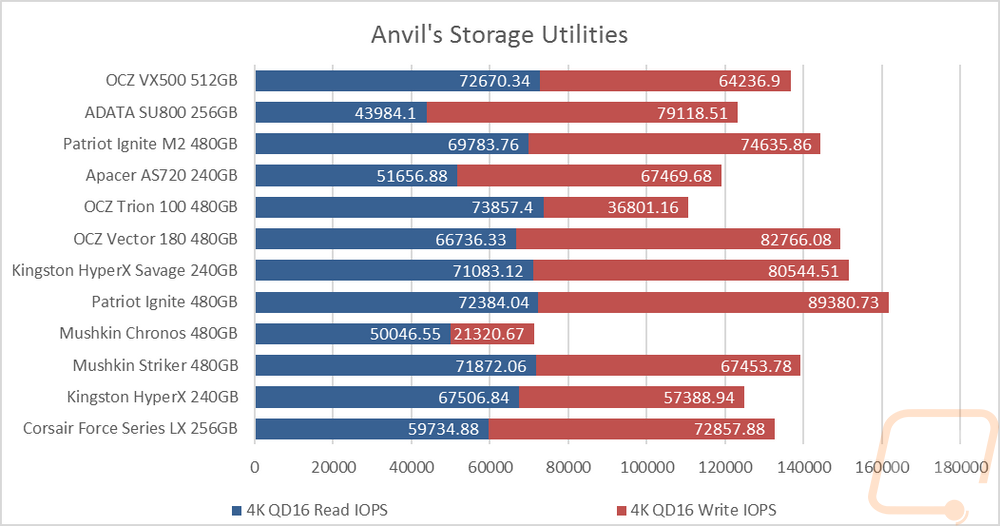 For my last benchmark, I stay in Anvil’s Storage Benchmark but run through a whole series of benchmarks testing the drive across different queue depths on both the read and write sides to see how well it scales up. On the read tests what I found was that the VX500 scales up in the top echelon of the drives tested and was significantly faster than the 3D NAND based SU800 from QD8 on up. It wasn’t the fastest at the high queue depths, but it was in the top three behind the OCZ Vector 180 that it is replacing and the OCZ Trion 100. For the write tests, the numbers weren’t as flattering. The VX500 didn’t really keep up even from the beginning and ended flat from about QD4 with just a tiny bump at QD8. 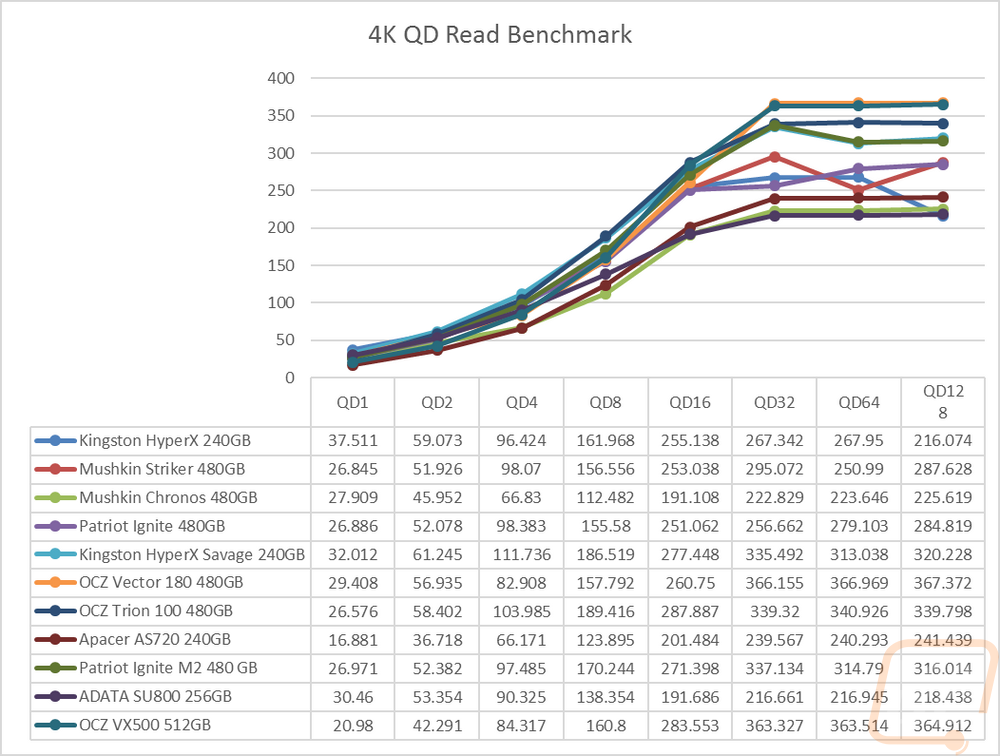 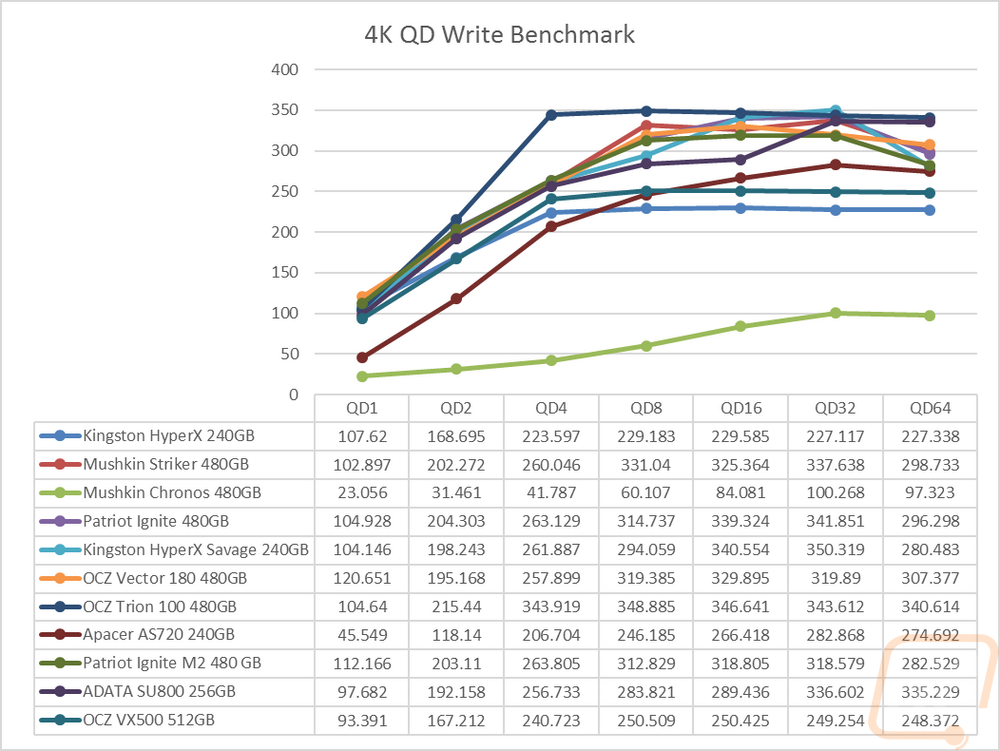 The Toshiba OCZ VX500 is a bit of a mixed bag. I was a little disappointed with the move to a cheaper sheet metal casing from the machined cases of past OCZ drives. They did however still manage to make the design look good while keeping costs and weight down. This isn’t a drive I would be afraid of showing off in my case. The VX500 shares a lot with the older Toshiba Q300 Pro but the drive doesn't feel dated at all. Performance was impressive on the read side especially with the drive topping our charts in a few benchmarks for SATA based drives. This was especially two in the PCMark 8 Storage benchmark. The write speed did leave a little to be desired, especially when testing at higher queue depths where it fell flat. The sequential numbers did match what was promised though so even people who only look at the specifications shouldn’t be surprised at all. It's getting harder to find MLC-based drives and the VX500 does fit the bill with a short list of other drives. The Toshiba TC358790 controller performed well, even after not seeing any external DRAM on the 512GB model.

As for pricing, the VX500 comes in at $195.99 right now in the 512GB capacity that I tested. This means it isn’t really competing with the value drives but I was surprised to see it not being a little closer with a few other MLC-based drives. That said it does seem to be in line and even below the MLC based Samsung 850 Pro. The TLC Samsung 850 EVO, on the other hand, is cheaper when you find them. So in the end, the VX500 isn’t really a value drive, even when considering the MLC and performance. But it is a good drive for someone looking for fast read speeds and an impressive 5-year warranty on a SATA based drive. I think a lot of the people looking for mid to premium drives are starting to look at M.2 options so the market might be smaller, but it is still there. 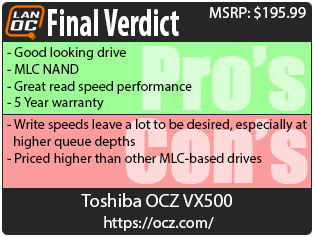 You might call him obsessed or just a hardcore geek. Wes's obsession with gaming hardware and gadgets isn't anything new, he could be found taking things apart even as a child. When not poking around in PC's he can be found playing League of Legends, Awesomenauts, or Civilization 5 or watching a wide variety of TV shows and Movies. A car guy at heart, the same things that draw him into tweaking cars apply when building good looking fast computers. If you are interested in writing for Wes here at LanOC you can reach out to him directly using our contact form.
Discuss this article
Log in to comment
Posts in discussion: Toshiba OCZ VX500

We have 892 guests and one member online