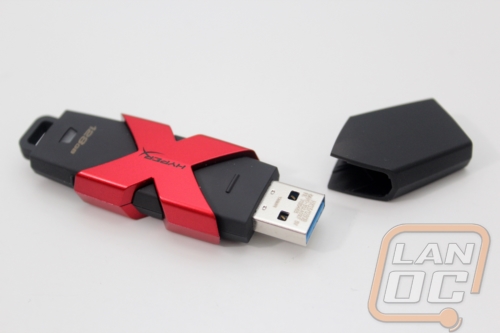 With cloud storage I would forgive you if you haven’t thought to much about USB thumb drives recently, I know I have for the most part only been using thumb drives in a few situations where I used to do all of my work directly off of one. The thing is there are situations where the cloud just doesn’t work. A good example of this is with large files but it also can be important when security is a concern and also for installing windows and device drivers. Because of that I have kept a Kingston DataTraveler HyperX drive around. I keep movies and TV shows on it and keep it with my laptop normally because the SSD on my laptop is limited in size. Recently though Kingston introduced a new USB drive in their HyperX brand, the HyperX Savage. They dropped the DataTraveler branding all together and they jumped up to USB 3.1. Today I’m going to take a look at it and find out how it compares to its older brother.

Typically, we break down the packaging and then the photos and features on their own. Being a USB flash drive the Savage isn’t exactly packed full of things to talk about both in exterior features as well as its packaging so I put them together here. So starting out with the packaging the Savage drive came in a formed blister pack. The front you can see and feel nearly the entire drive. There is a insert with the branding on it. In this case it has a black background helps set the red apart. The drive capacity is up in the top right corner and directly below that Kingston was nice enough to list the read and write speeds as well. The front of the packaging also lets us know that this drive has a 5 year warranty and it will work with mac, PC, and even game consoles. 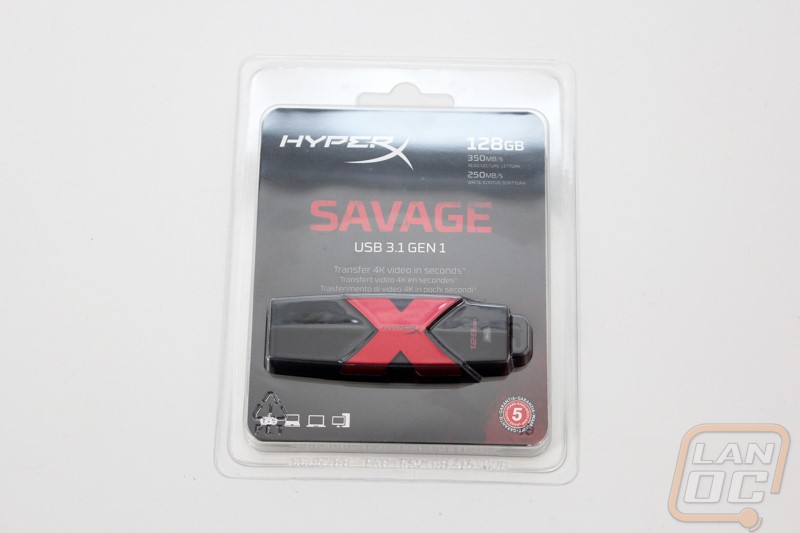 The back of the packaging is mostly filled with a wall of fine print but they do list off a few features. There is also a breakdown of all of the different OS’s it will work with. 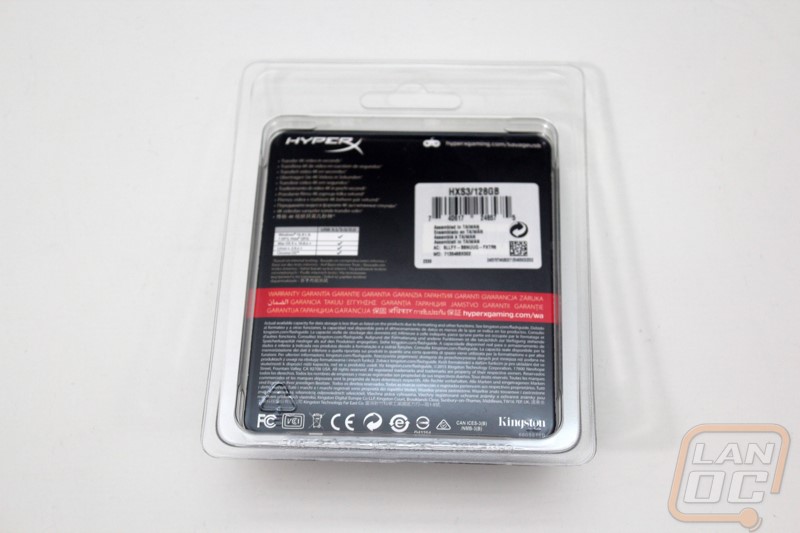 Getting into the packaging to get the drive out is a complete pain in the butt, plan on having scissors around or you might cut yourself up trying to get in. Inside we have the drive and then the insert that is the background to the drive on the front and also where all of the information was at on the back. This insert also pulls open and has more information inside. In addition to that they slipped in a string to help you attach the drive to your key ring if you want. 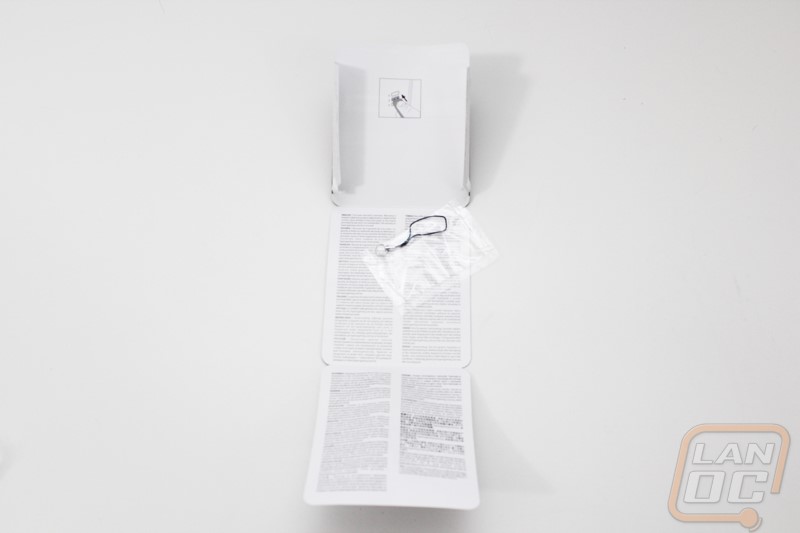 With the Savage USB 3.1 out we can finally get a better look at it. Basically the drive has a similar shape to Kingstons older DataTraveler HyperX drive only this drive is a little thinner. The Savage has an LED status indicator down on the end near the ring hook. This is also where the drive capacity is labeled. From there right in the middle the drive has a HUGE red X in the middle with the HyperX logo on it. Personally I would prefer the drive be thinner and not have the big X but that’s just me. Past that the USB plug cover is formed to fit up into the X. The drive is much thicker than your standard every day USB drive but it is in line with a lot of the higher speed performance USB 3.0 drives. 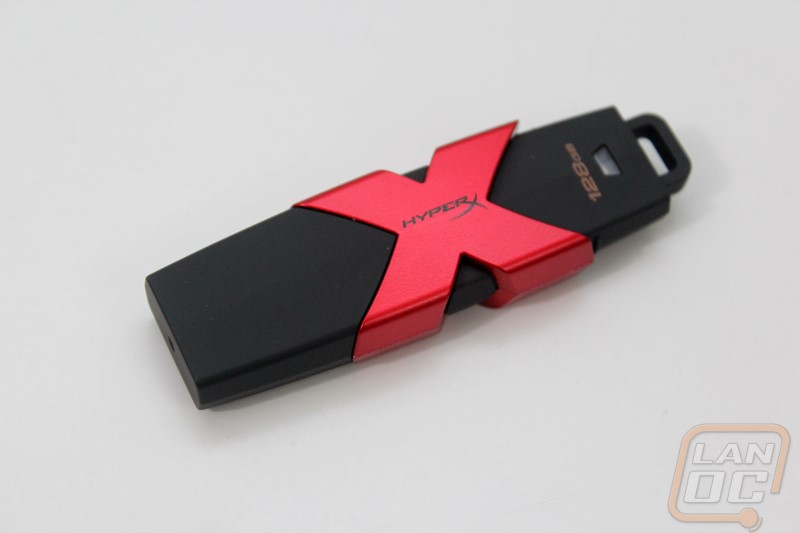 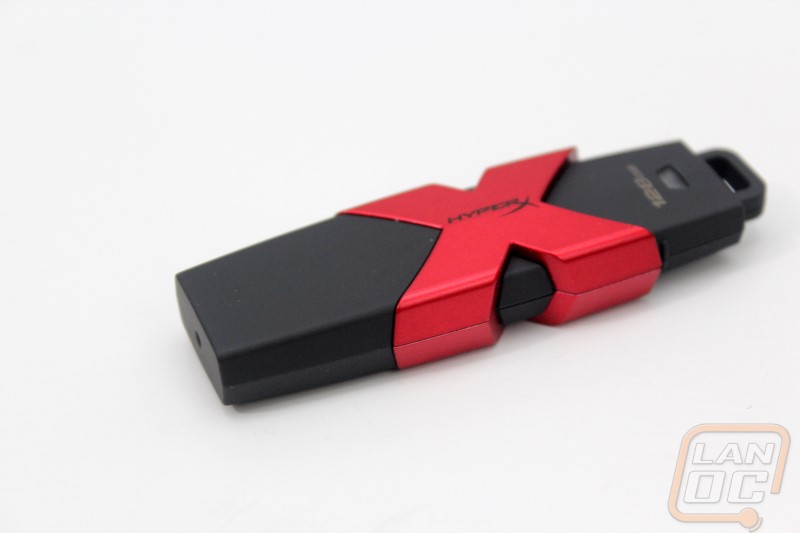 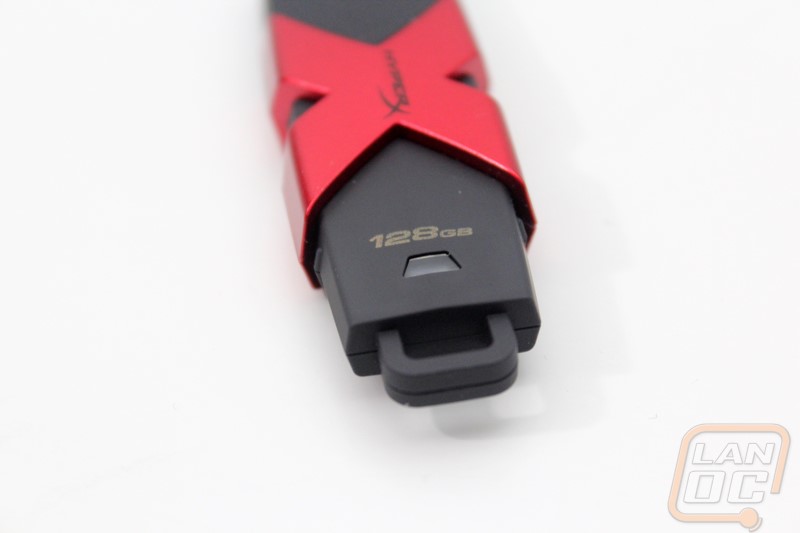 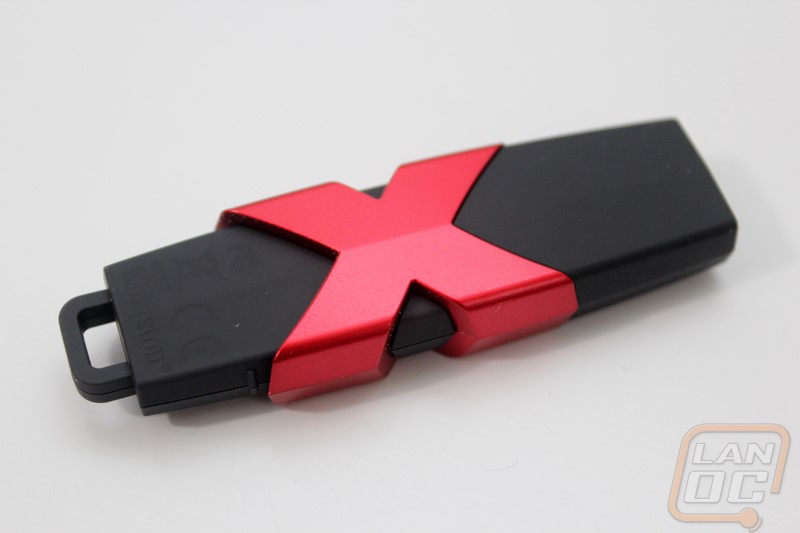 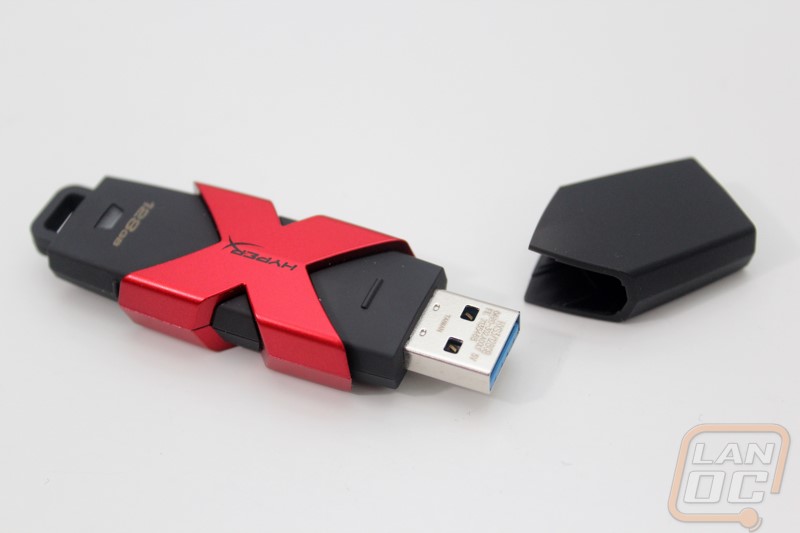 With the Savage being a USB 3.1 drive its clear that performance was going to be the most important aspect. So to put that to the test I ran it through a couple of the SSD benchmarks that we use. Specifically, I ran the Savage through a full CrystalDiskMark benchmark to test out its sequential performance and then a full Anvil’s Storage Utilities SSD Benchmark to check out IOPS and see the response times as well. Because we don’t test to many USB 3 flash drives I did bust out the older Kingston DataTraveler HyperX and tested it as well for comparison.

Running through these tests I found out a few things really quickly. First the new Savage drive is crazy fast, with read speeds of 322+ and 287+ on the write speeds it is faster than some of the SSDs that I use. The older drive wasn’t bad as well but was much slower on the write speeds. It did however handle the high queue depth better. What I also found out doing this test is that both drive, but especially the Savage have performance that depends on how warm the drive is. This isn’t a huge shock, we have seen it on laptops and on just about every phone. Basically when doing my testing (I retest a lot just to confirm my numbers), if I didn’t wait a little in between tests the numbers would suffer. Sometimes this is due to a cache but in this case it would only happen for me when the drives got especially warm. 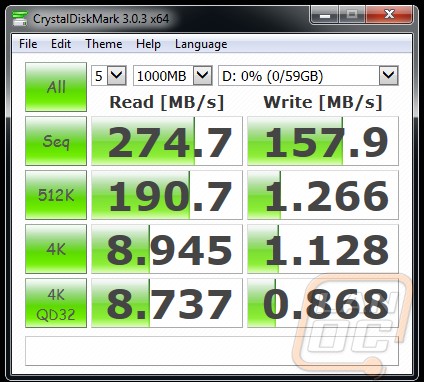 So with that in mind how did the drives perform in the more in depth Anvil benchmark? Well when looking at the sequential numbers the Savage pulled ahead once again both on the read and write benchmarks. The older HyperX drive performed a little better in the high queue depth situations once again and Anvil’s favors that so it showed in the overall numbers. 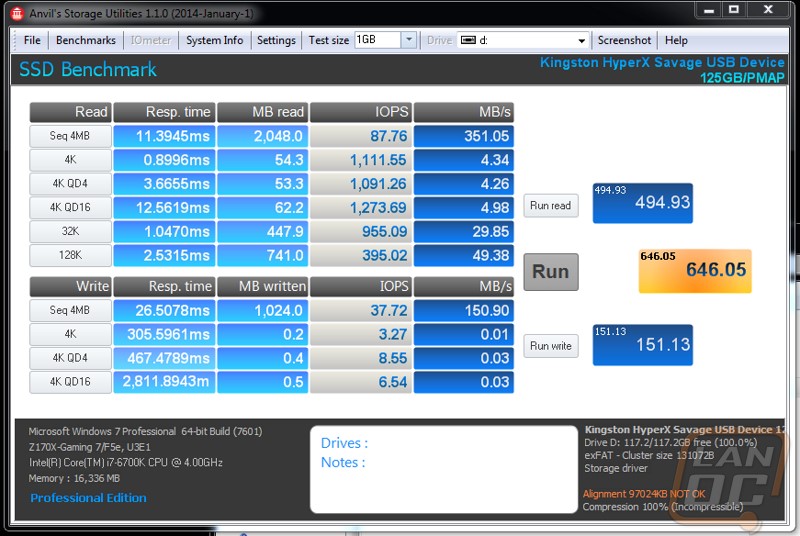 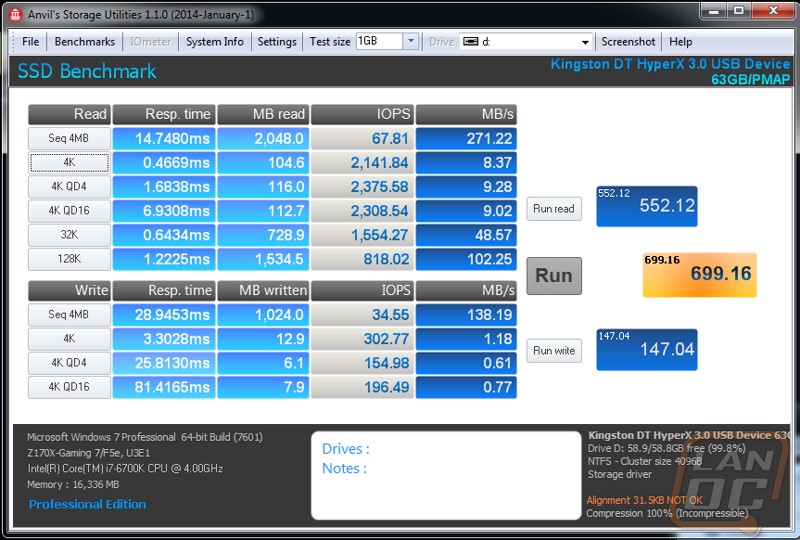 So what do they all mean? Well first off we found out that even the older HyperX drive is still a fast drive. In order to see the optimum performance from the Savage avoiding high queue depth situations where you are doing more than one thing at a time on the drive will avoid those slowdowns. With a considerably faster write speed I think the Savage is still going to give you the best experience. Most people are taking things off and putting things on their drives, not loading it once and just reading it over and over, so the write speed will show in everyday use.

The HyperX Savage USB 3.1 type 1 drive falls into a very interesting position. The drive matches or beats the advertised performance numbers and with a quick glance at available drives it is faster than the standard USB 3 drives on the market although I think there are still a few drives that are a bit quicker. The additional speed does have a few downsides though, for one the drive when running for a while can get warm to hot and even worse when that happens the drive seems to throttle back. Also the drive is considerably larger than all of those standard USB 3.0 drives due to its performance. That is of course a typical HyperX thing though, they are going to go for the fastest performance possible leaving the smaller slower drives for Kingston to market. On the plus side the black and red theme on the drive looks good and kingston has a good reputation for quality as well. So why does that leave the Savage USB 3.1 in an odd place? Well it’s too large for most people to carry around, so that leaves it for people like me who need a fast drive to expand the storage capacity on my Ultrabook. I have a feeling that is a small crowd these days with network and cloud storage.

That said if that is what you are looking for does the Savage make sense financially? Well at $90 for the 128GB model is spot on at the same price as all of the other 128GB high speed drives and frankly it is faster than the other drives at that same price. Dropping down to the 64GB Savage drive will save you some money with it a little below $60 but you will see a big drop in write speed performance, so I would stick with the 128GB or larger if possible. 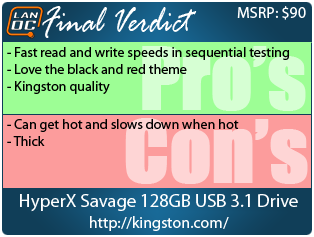 You might call him obsessed or just a hardcore geek. Wes's obsession with gaming hardware and gadgets isn't anything new, he could be found taking things apart even as a child. When not poking around in PC's he can be found playing League of Legends, Awesomenauts, or Civilization 5 or watching a wide variety of TV shows and Movies. A car guy at heart, the same things that draw him into tweaking cars apply when building good looking fast computers. If you are interested in writing for Wes here at LanOC you can reach out to him directly using our contact form.
Discuss this article
Log in to comment
Posts in discussion: HyperX Savage 128GB USB 3.1 Drive