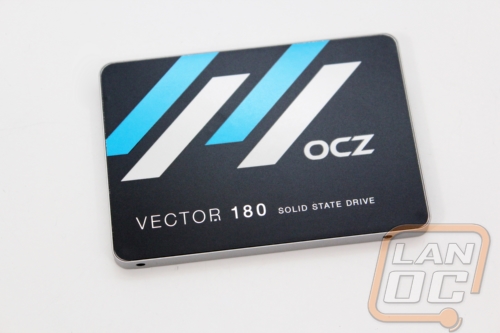 Well at the end of the day the OCZ Vector 180 is an interesting drive. Given the performance I have seen with older OCZ drives I went into this with high expectations. Sadly in a lot of the synthetic benchmarks the numbers weren’t what I was expecting. They were far from the worse but specifically in comparison to the S10 based drives I have tested recently our sample fell a little flat. The one area that the Vector 180 really stood out though was in the more real world based PCMark 8 benchmarks. The synthetic benchmarks are nice, but it is great to know that the drive will perform well in things like your games and in Office. So in the end I was left a little torn with the Vector 180 performance. It’s not at the top of the charts like I expected, but it did perform where it was most important.

The rest of the drive did stand out for me though. They stuck with a nice rounded casing that I always like and the new styling looks great. Even better OCZ included a nice 5 year warranty with the Vector 180, I wish more companies would stand behind their drives like this.

The only other issue I had with the Vector 180 came up when I was looking into its MSRP and pricing. The MSRP for the 480GB model tested is currently 259.99 but you can find the drive for about $219.99. That in itself sounds great but some of the S10 based drives are selling for well under $200 right now putting the Vector 180 in a tough spot. Just like the new HyperX drive, the Vector 180 has the styling that people want but it seems to be adding a little more to the price tag than I would prefer. That said you are also getting a copy of cloning software and a better warranty as well. In the end I hope to see the Vector 180 come down a little more but it is still a good drive with good real world performance. 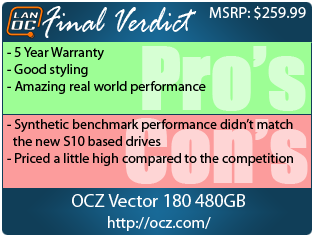 You might call him obsessed or just a hardcore geek. Wes's obsession with gaming hardware and gadgets isn't anything new, he could be found taking things apart even as a child. When not poking around in PC's he can be found playing League of Legends, Awesomenauts, or Civilization 5 or watching a wide variety of TV shows and Movies. A car guy at heart, the same things that draw him into tweaking cars apply when building good looking fast computers. If you are interested in writing for Wes here at LanOC you can reach out to him directly using our contact form.
Discuss this article
Log in to comment
Posts in discussion: OCZ Vector 180 480GB