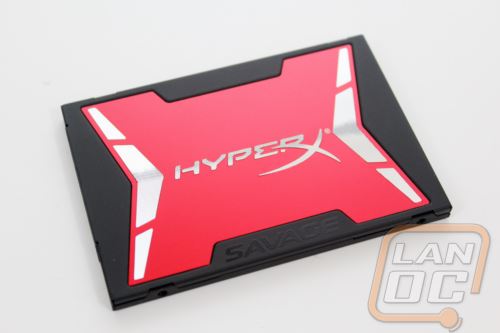 With two of the other drives testing also running the same Phison S10 controller we have a decent idea of how the Savage will perform but without testing we don’t know for sure. With the Savage using the Toshiba A19 NAND where the other two drives ran Micron’s 16nm asynchronous MLC I would expect to see the Savage pull ahead on write speed slightly or at least match with the capacity disadvantage.  So I put the HyperX Savage on our test bench and ran it through our benchmark suite to see how it compares to the competition.

To start things off I ran through CrystalDiskMark to get an idea of its sequential read and write speeds. For read sequential speeds the Savage pulls an impressive 549.6. This is slightly above the other two S10 drives and at the top of our charts for SATA drives. For write speeds the Savage was right with the Ignite and Striker and as expected nearly at the top of the charts (.3 MB/s to slow). 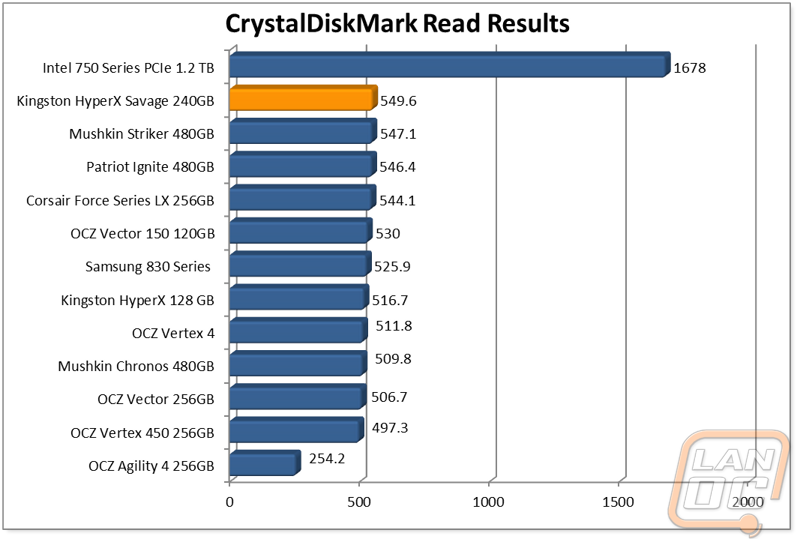 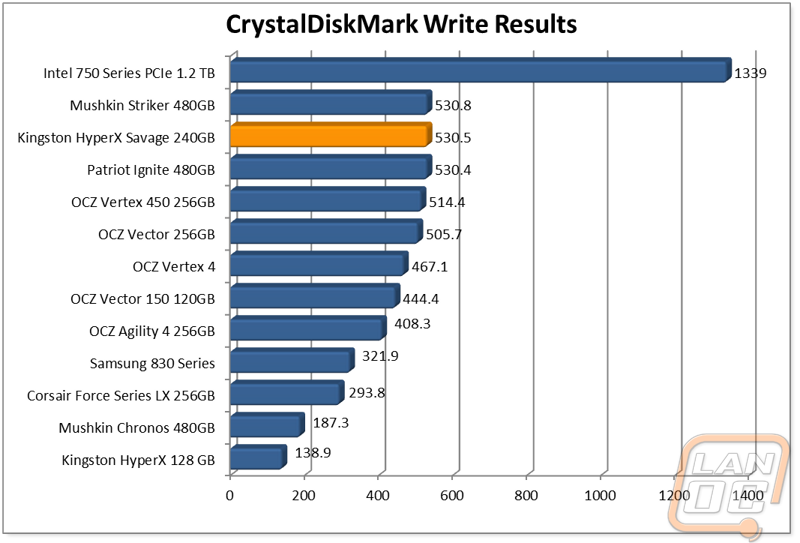 Next I ran the Savage through three of the Copy Benchmark tests in AS SSD. For these results rather than use data transfer speeds we are graphing by the speed of the transfer so the lower the number the better in this case. To help show the best drives overall I have also combined all three results, this way we can see overall what drives are faster. In this case the Savage performed noticeably better than the Ignite and a little slower than the Striker. This was due to slower program and game transfers. This put the Savage exactly on par with the Corsair Force Series LX with them both having a total speed of 9.92. 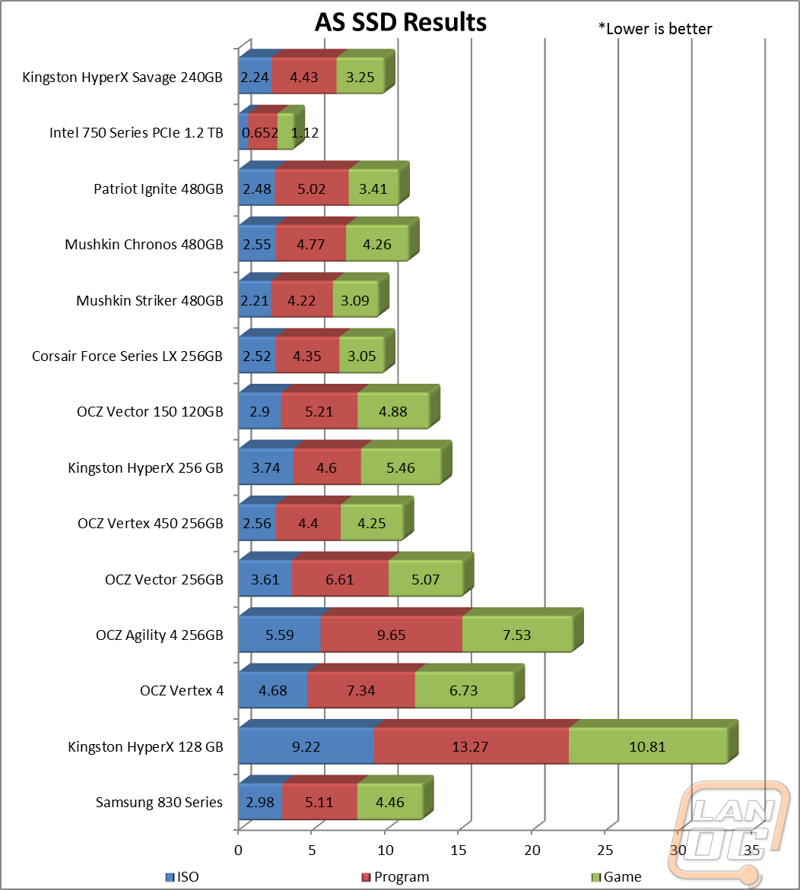 Next in Passmark 8 I used the advanced disk benchmark to run through all four of the default tests. These four tests simulate different business related workloads. The Database results were similar to what I saw with the other S10 drives but the Savage performed well in the Web Server and File Server benchmarks. The OCZ drives all still performed better with these benchmarks by a large margin, just like what I saw previously with the S10 drives. 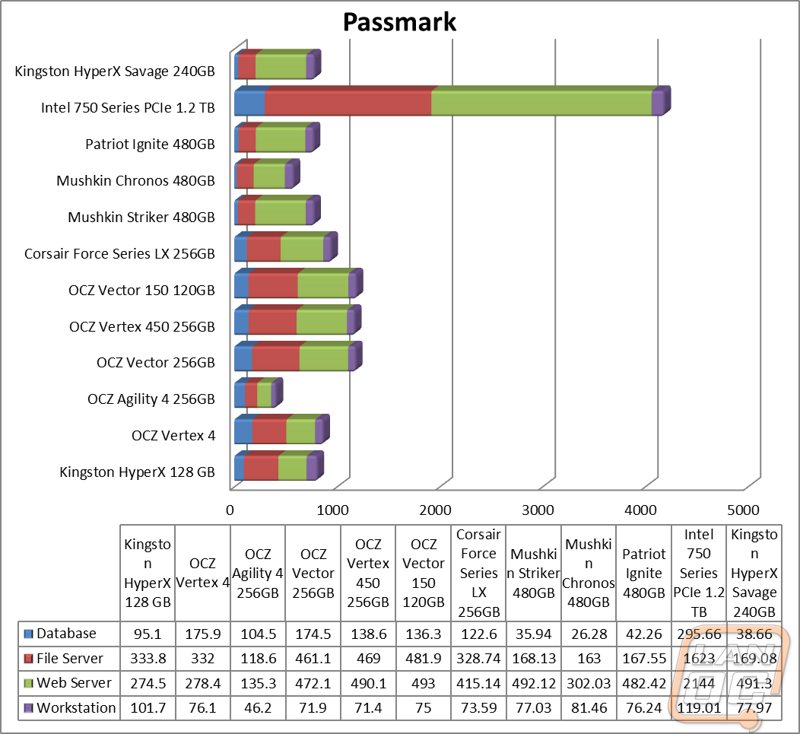 Next I ran the drive through PCMark 8 to get a good idea of real world performance. Here I saw an average of 229.26. This might sound low but it is over the course of the entire benchmark. The result is slightly higher than the other S10 drives but still not enough to pull ahead of the Corsair Force Series LX.

Next I used Anvil’s Storage Utilities to test both the read and write IOPS at 4k QD16. Here the Savage performed just slightly under the Ignite and above the Striker. More importantly this puts the Savage as the second fastest SATA drive tested in Anvil’s. 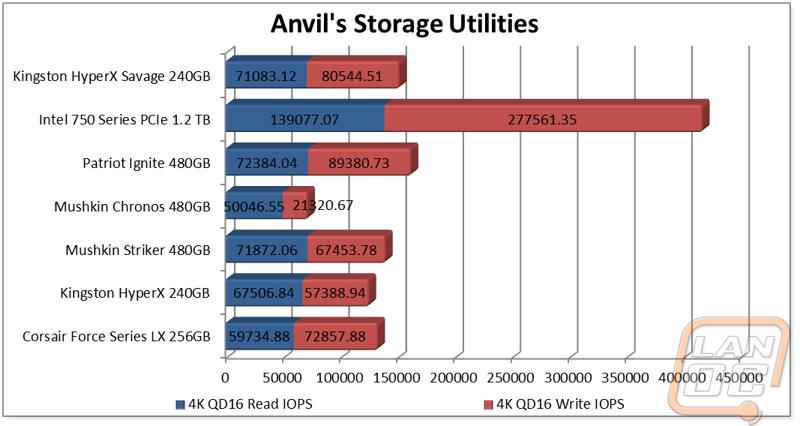 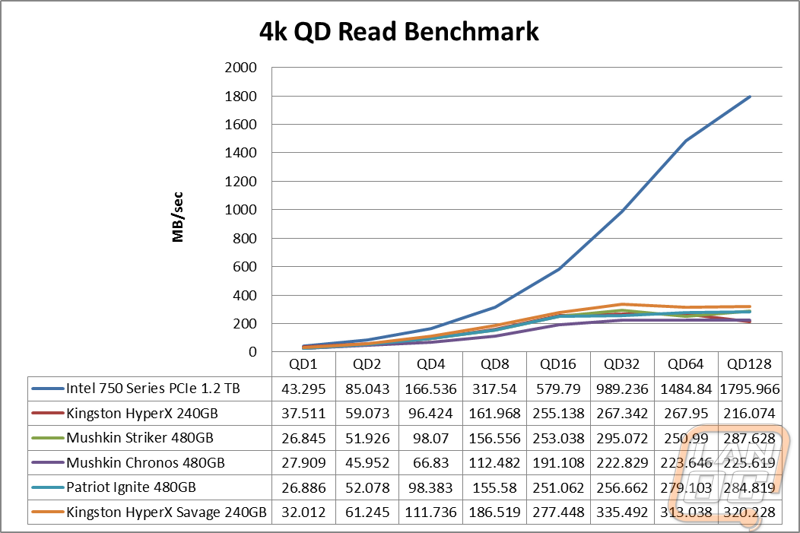 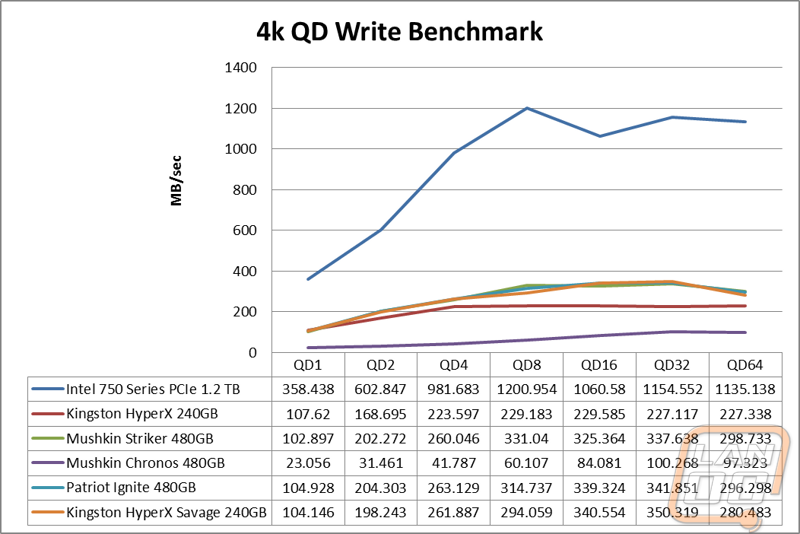