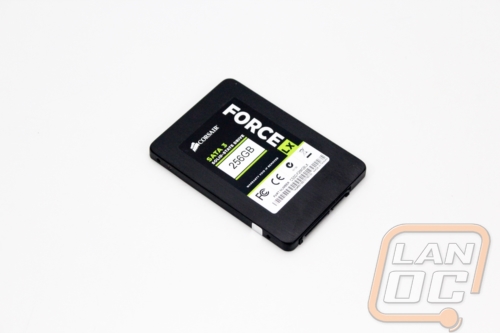 A few years ago only a few people were running an SSD in their computer. These days though most enthusiasts and gamers are sporting one. Why? Because they speed up your computer in areas that even the fastest CPU or video card can’t do. The thing is if you got in on it all early, you are most likely running a small OS only drive. Well if you haven’t noticed prices have been dropping, for what you spent on that 60GB drive you can get the Corsair Force Series LX 256GB. Not only will that hold your OS but now you can installed a few more programs on it as well. In fact you should be able to run everything you need off of your SSD with the exception being if you are like me and install every steam game you own. You should keep some of that on a second hard drive. Today I’m going to take a look and see how the budget focused LX drive performs and find out if it is currently the best deal to be found. 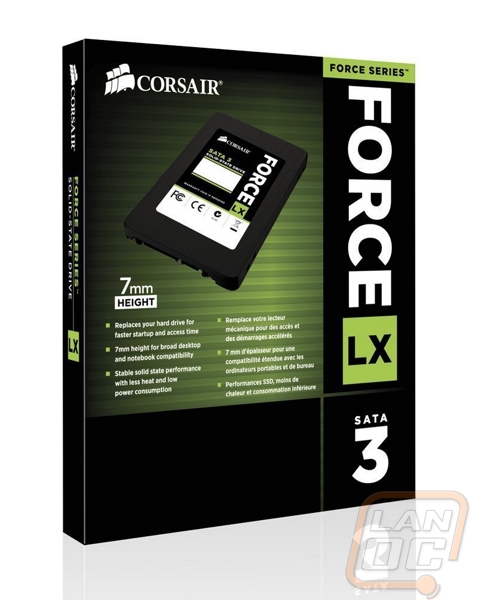 The packaging for the Force LX has a black background with a green trim that matches the green used in the LX Logo and on the SSD. The front has a photo of the SSD along with a short listing of features and then on the right side of the front the FORCE LX logo runs down it. They also slip in a SATA 3 down in the bottom as well. Inside the box the SSD comes in a plastic clamshell tray and along with that you get a small paper with all of the warranty information.


Our Testing Procedures and Test Rig

The Force LX uses a fairly standard black aluminum case with rounded corners. This isn’t the same casing that Corsair uses on the rest of their drives, but by going with a standard stamped case like a lot of other manufactures they could keep costs down to keep the Force LX as their price point drive. They did stick with their normal theme on the sticker on the top though. Each of their SSD Series has the same theme with the name vertical down the side of the sticker and then the color coded LX. They left a large white area close to the middle for the SSD capacity, in this case we are testing a 256GB model. Then down along the bottom of the sticker you have the serial number and barcode. 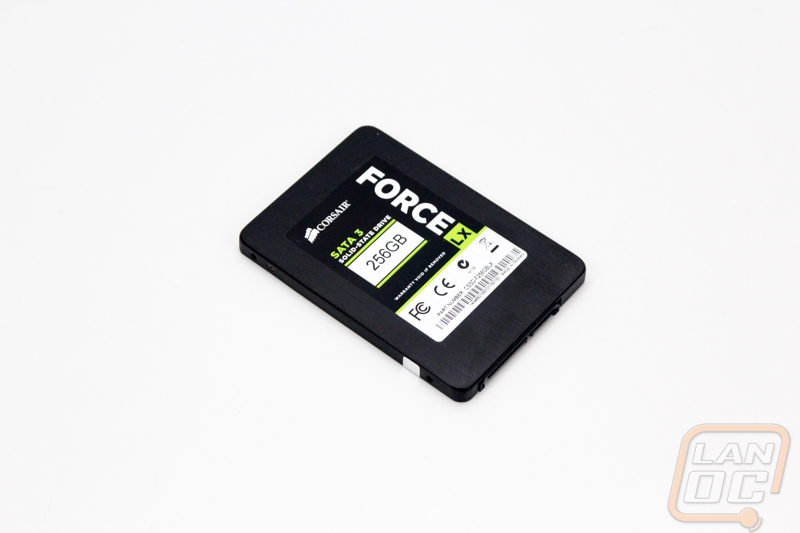 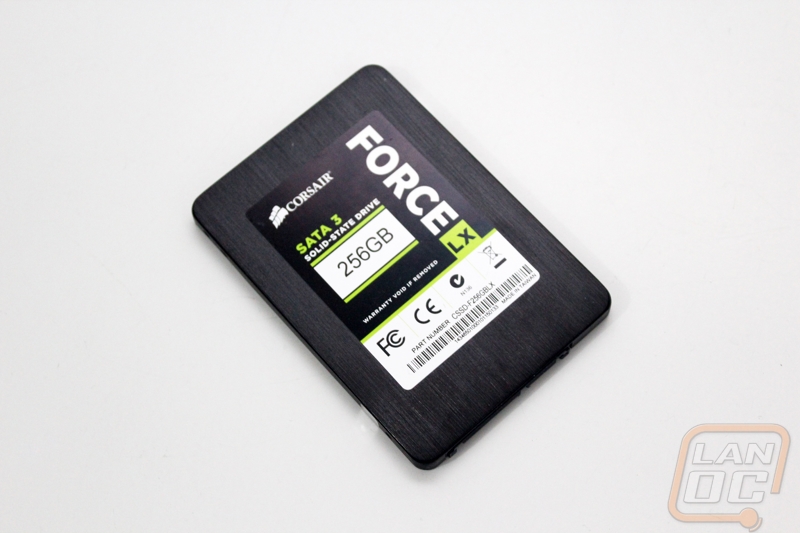 Around back, we don’t have too much going on. You have mounting points on the bottom as well as the sides of the drives to fit any standard 2.5-inch mount. If you are looking to break into the Force LX like I am going to do. You need to get at the four tiny screws that are flush mounted on the sides of the drive. There are two stickers that cover two of the four screws to let them know you have been digging in the drive though so only do that if you don’t plan on RMAing in the future. 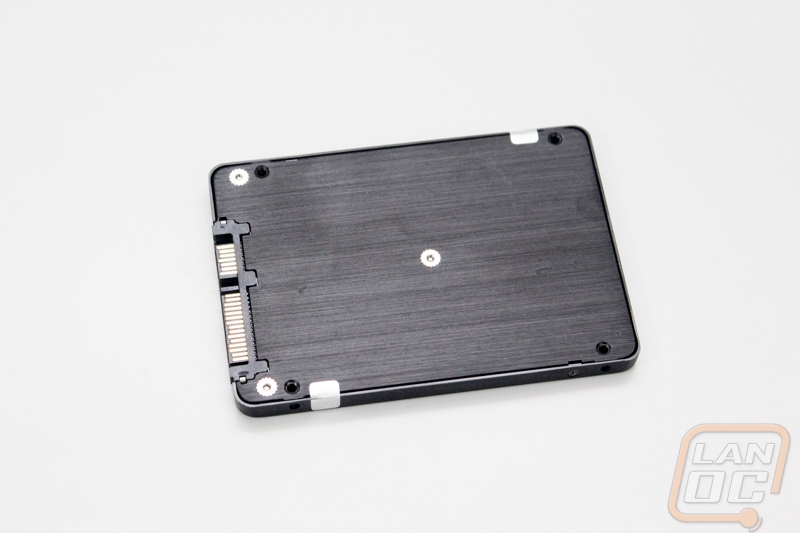 So when I opened up the casing I was surprised to only find a PCB that takes up half of the case. Normally an SSD PCB fills then entire 2.5 inch drive. With NAND increasing in capacity Corsair was able to fit more into a smaller space for the Force LX. A smaller PCB lowers costs and in the case of the Force LX I don’t think they ever had any intentions on making a huge capacity drive in a pricepoint drive so there wasn’t a need to save space for additional NAND to go beyond 512GB. So now that we are into the drive we do still have to pull out three more screws to get to the back. But here on this side we can see four out of the eight 32 gig MLC NAND chips. To be specific you are getting Micron L85 20nm die NAND. 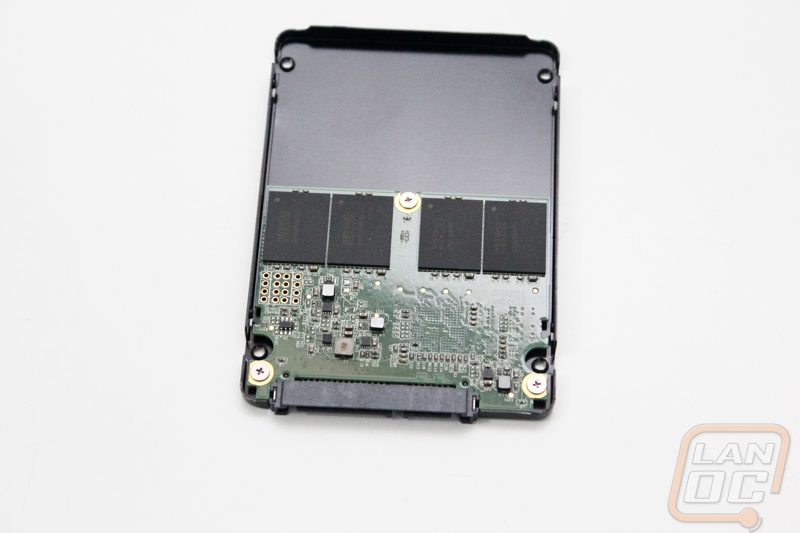 When we flip the drive over we can see the other four Micron L85 20nm die. In addition to that closer to the SATA port we have the SMI SM2246EN Slow Motion controller. For buffering it also has a 128MB Nanya DDR3-1600 DRAM chip next to the controller. 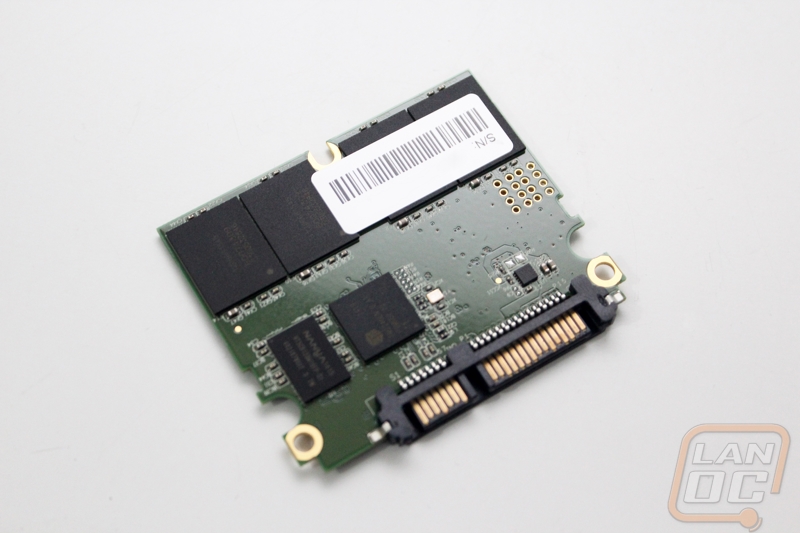 Really the only thing that counts on an SSD is how it performs. To put the Corsair Force LX to the test I ran it through our benchmark suite. That includes a variety of benchmarks to test the performance in different situations. To start off that tested I ran the Force LX through CrystalDiscMark to see its read and write performance. For rear speed the sequential performance is up at the top of our charts but I will admit we haven’t tested to many SSDs recently so they are a bit dated. At 512K and 4K the results were a little lower than the high end OCZ drives but still competitive. When it came time for write speeds though the Force LX fell behind. Both results were in line with what Corsair lists though. With a write speed of just under 300 it falls behind all of the OCZ drives and even behind a few of the older Sandforce drives as well.

Next I ran I/O Meter using a setting that tests both read and write performance at 4k. This gives us a nice overall number that sums up the read and write performance together. The Force LX stands well above the older Sandforce drives here and is surprisingly close to the OCZ drives as well. The lower write speed no doubt hurt things considering how well the LX performs on the read side. 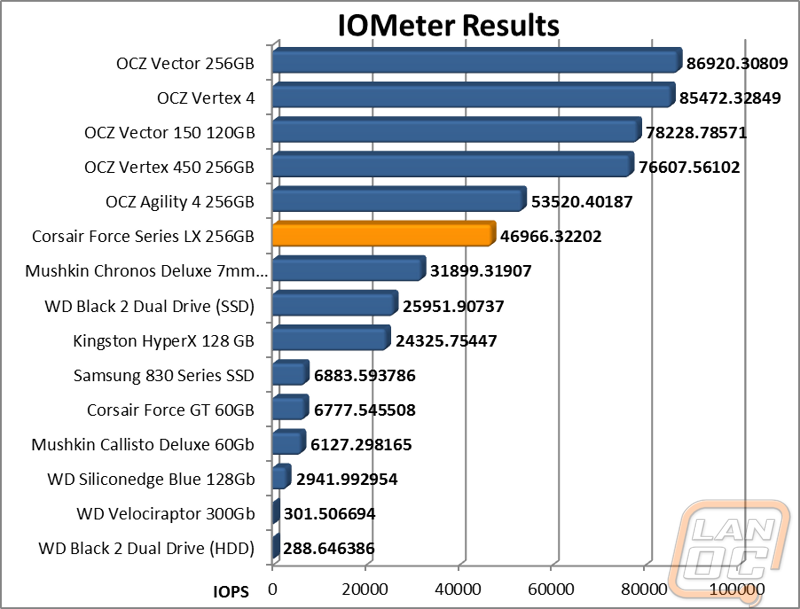 Using AS SSD rather than use the sequential results just like CrystalDiscMark I use their program benchmark. Here it runs through three different situations, a game, program, and ISO and tests how fast they transfer. This is a timed test where lower is better. As we can see all three of the tests put the LX in a good light beating everything else tested. 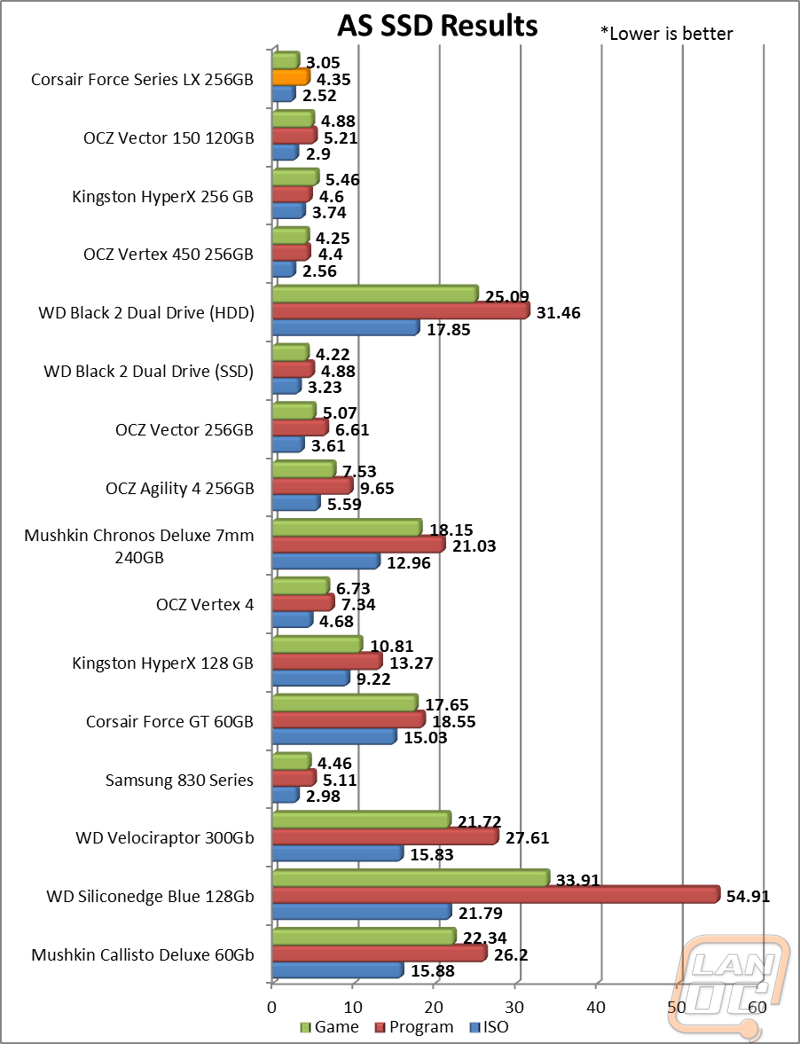 Next I ran the Force LX through four different synthetic benchmarks in the advanced test on Passmark. Each test is designed to represent a specific office use situation. Here the lower 4k and high queue depth performance showed through more with the LX falling behind all of the OCZ drives and even the Sandforce powered Chronos Deluxe. 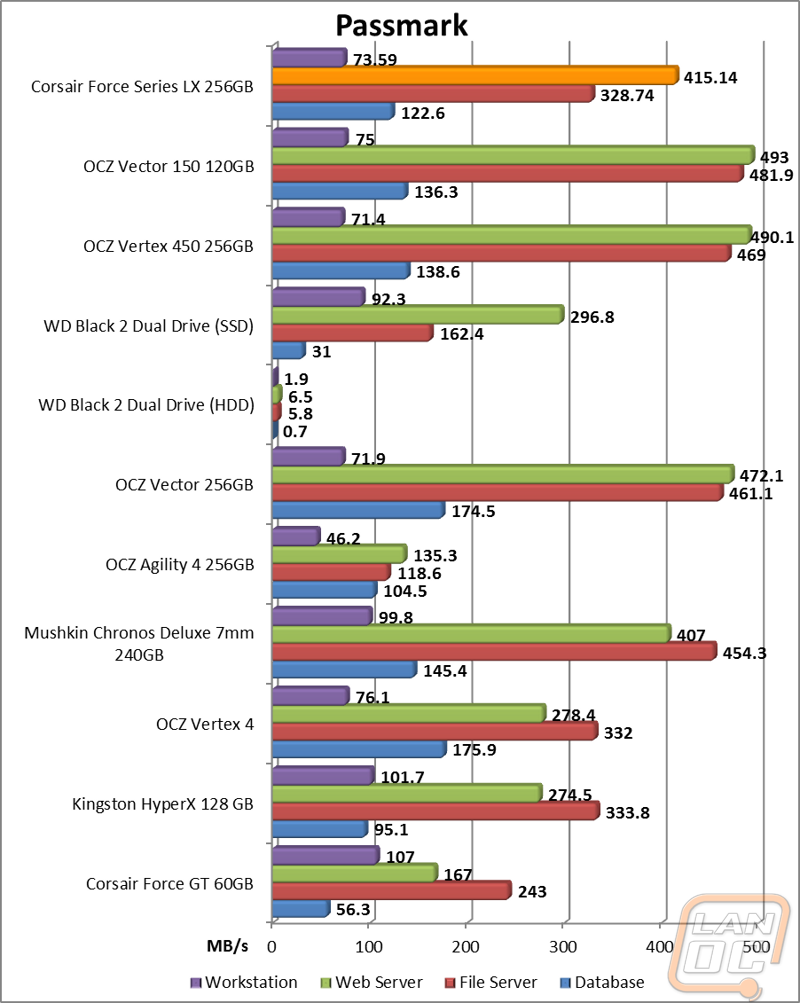 Last but not least I included testing using the storage test in PCMark 8. I love this test because it runs through using real programs like World of Warcraft to get its performance numbers. Not only that but it also runs through each test three times to verify the results. So how did the Force LX perform? Well it came in just a touch behind the OCZ Vector 150 that I introduced this new test on. Thankfully, we will be adding more SSD reviews over the next month, that will fill out this a little more.

So at the end of the day where are does the Corsair Force LX stand? Well as I mentioned when we started, this is a price point drive from the beginning. Corsair kept things cheap on the casing and the controller to help this be an entry level SSD. Even still when I ran it through our benchmark suite the Force LX did stand out in some of the tests, specifically in a lot of the read tests. With a lot of our benchmarks combining both read and write results the weak write performance of the Force LX really held it back in a few tests.

With this being a entry level drive, what I was really curious is how it compares to other similar drives that are currently for sale. While the MSRP is currently 144.99, the Force LX can be found for $125.99. That puts the drive at just under a 50 cents per Gig. Just for comparison currently there are a few SSDs currently selling a little closer to $100. Specifically there is a Crucial drive with similar read and write speeds that I think is a good comparison to the Force LX. That said it depends on how much the Corsair name is worth to you as well because at its current price the Force LX is still a great deal and a good performing drive for a budget build. 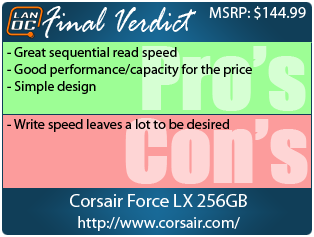 You might call him obsessed or just a hardcore geek. Wes's obsession with gaming hardware and gadgets isn't anything new, he could be found taking things apart even as a child. When not poking around in PC's he can be found playing League of Legends, Awesomenauts, or Civilization 5 or watching a wide variety of TV shows and Movies. A car guy at heart, the same things that draw him into tweaking cars apply when building good looking fast computers. If you are interested in writing for Wes here at LanOC you can reach out to him directly using our contact form.
Discuss this article
Log in to comment
Posts in discussion: Corsair Force LX 256GB

We have 646 guests and one member online