To say it’s been a while since we have taken a look at a Mushkin SSD would be an understatement. The last time we took a look at one of their SSD’s it was a SATA 2 drive. Things have moved on to bigger, cheaper, and faster things. Mushkin recently introduced their 7mm version of the Chronos Deluxe, a SATA 3 based SSD with advertised transfer speeds of up to 560MB/sec read and IOPS of 90,000. With numbers like that, I had to get my hands on it to see how it performed. How will it compare to all of the other drives with similar advertised performance numbers? Will this be your next SSD?

Packaging for SSD’s typically is about the same every time. Normally we see a box with the SSD inside of a piece of foam. This time around the Chronos Deluxe is packaged in something a little different. Muhskin went with a plastic packaging, much like what you would expect with ram. This put the SSD right up front where you can see it, a drastic change from normal. Of course this also means less protection for the drive, but SSD’s are known for being able to put up with a lot of abuse. The open design gives you a lot of what you see is what you get, in other words, beyond the SSD and packaging there isn’t anything else to be found here. It would be nice if they included a nice Mushkin sticker for you to show off your support though. 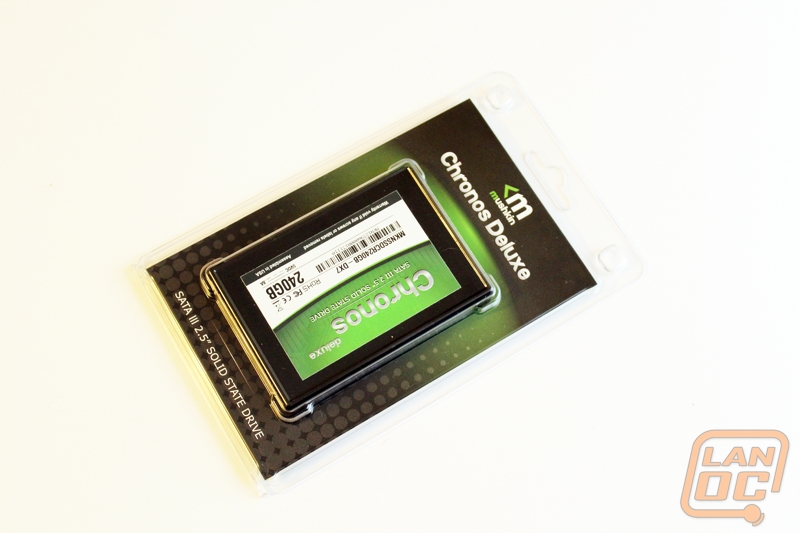 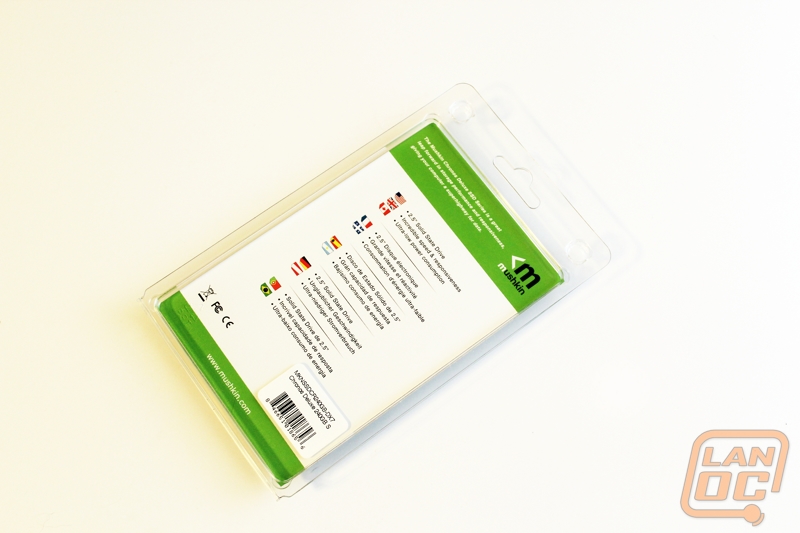 AS SSD – Copy Benchmark with ISO, Program, and Game results

The Chronos deluxe, as expected, has the black, white, and green theme that we see from Mushkin normally. Unlike Kingston and Corsair though we have yet to see a bright green cased SSD from Mushkin. They have stuck with the normal black case and just used a sticker to brank their ssd’s, much like OCZ. This does keep the costs down but a little more style, at least on a high end performance model might get them a little more attention. Where this model stands out specifically is in its thickness though, this is a 7mm model that will fit in more notebooks. A side benefit for 7mm SSD’s like this one is their additional support when using them in case mods or small form factor builds. I have been known to slip an SSD or thin 2.5 inch hard drive behind a motherboard tray to keep a build looking clean or when there just isn’t room for anything else. 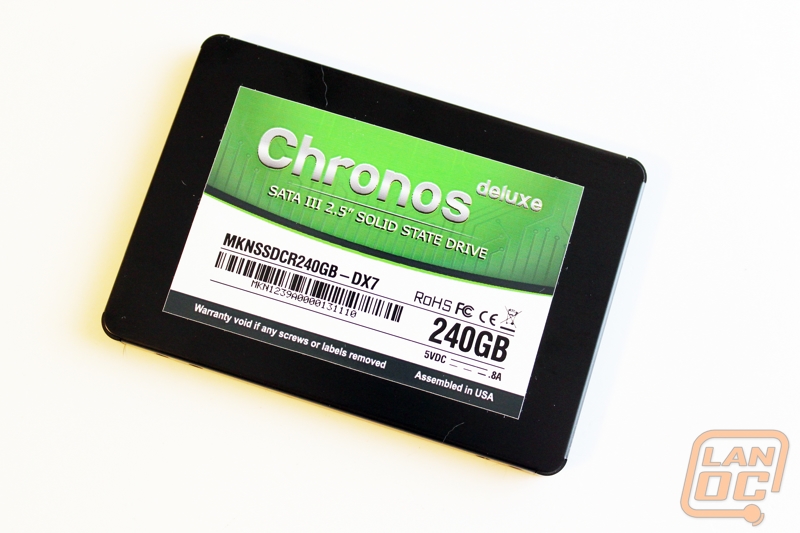 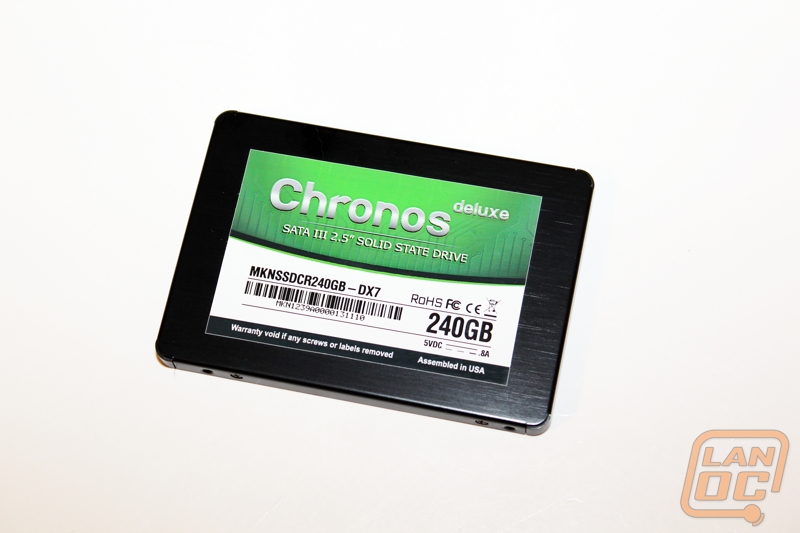 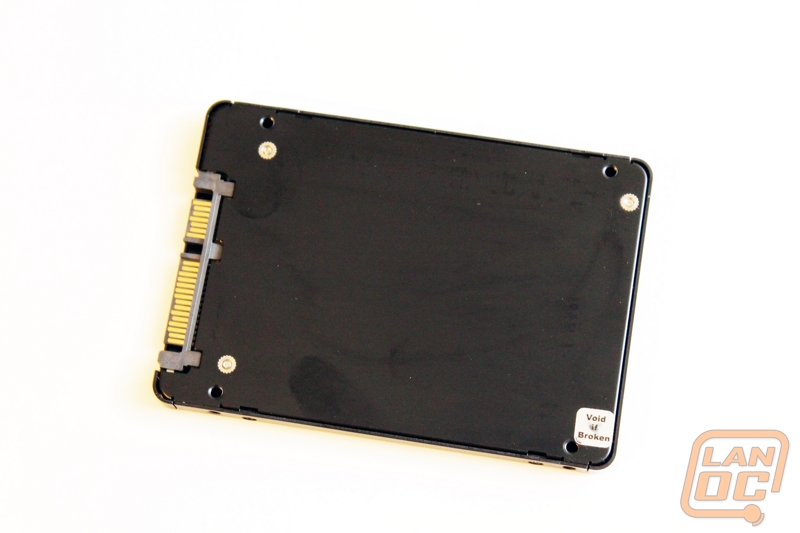 After breaking the warranty on the Chronos Deluxe 7mm, we pulled the SSD apart to take a look at what was inside. First and foremost you have the Sandforce controller chip SF-2281, this is where the drive is getting its top notch performance from. Beyond that, for capacity we have eight Toshiba flash chips per side giving roughly 15 gigs per chip. These Toshiba chips (th58TEG7D2HBA4C) are 24nm and spec’ed at 5000 P/E Cycles. 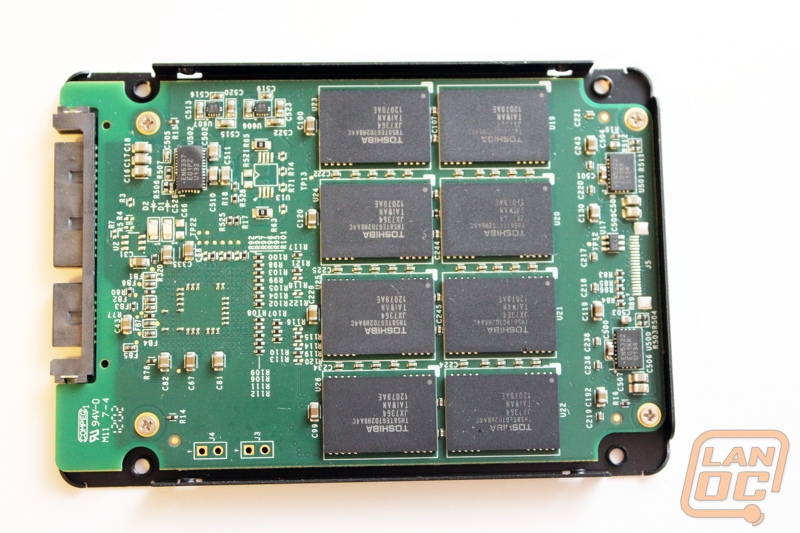 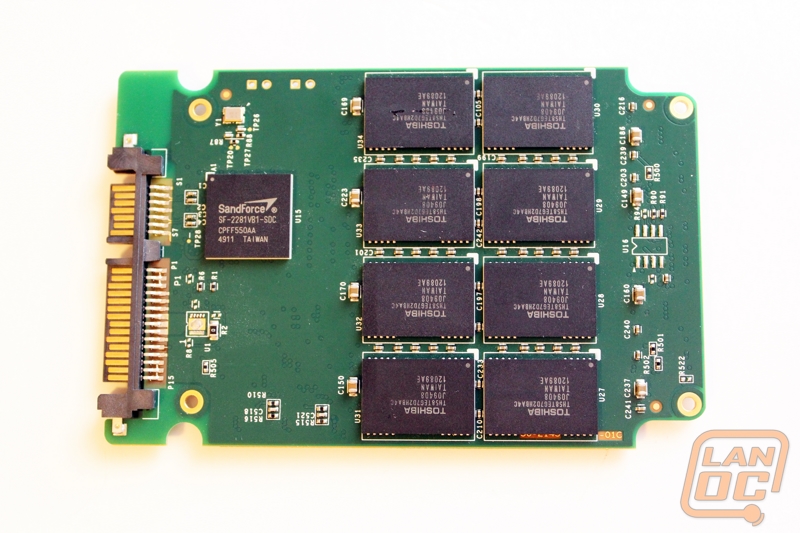 Starting with CrystalDiscMark, I put the Chronos Deluxe 7mm to the test. The results themselves are are extremely impressive, we saw read speeds of over 500 Mb/s and write speeds of over 300 Mb/s. Having the same controller as the Kingston and Corsair offerings I wasn’t shocked when the performance numbers came in nearly the same as those drives as well. On the write speed the OCZ Vertex that we recently tested still came in considerably faster, but read speed benchmarks were in line as well. 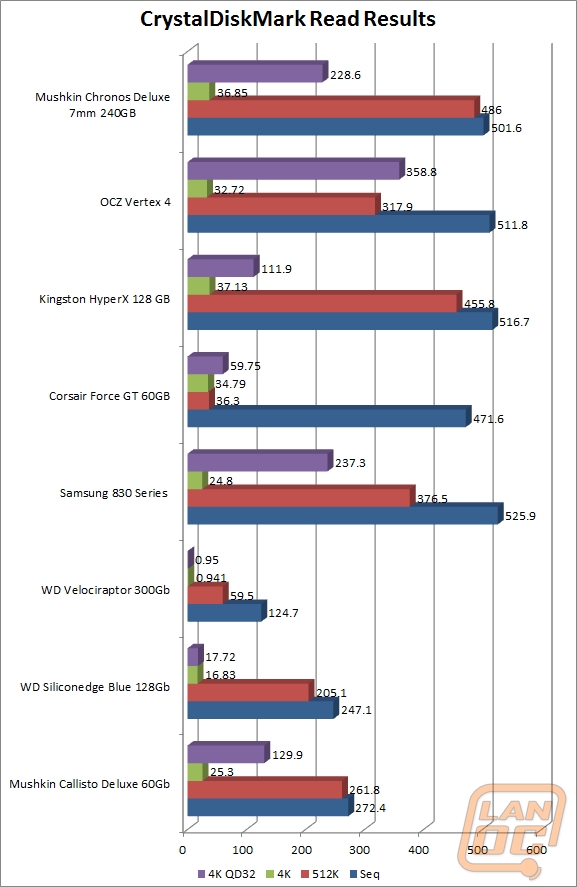 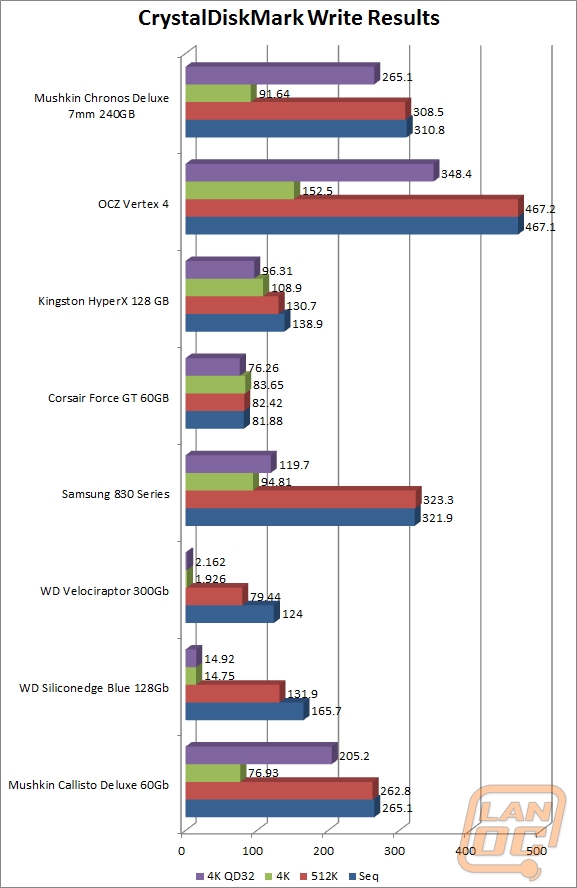 Much like the write speed tests that we saw with CrystalDiscMark, our IOMeter results still showed the OCZ Vertex worlds apart when it came to pure IO benchmarks. With that being said, the Chronos Deluxe 7mm outperformed the Kingston and Corsair drives with the same controller, they have obviously made a few improvements on the firmware side of things. Our IOmeter benchmark includes a queue length of 30, its clear that the Sandforce controller still struggles there. 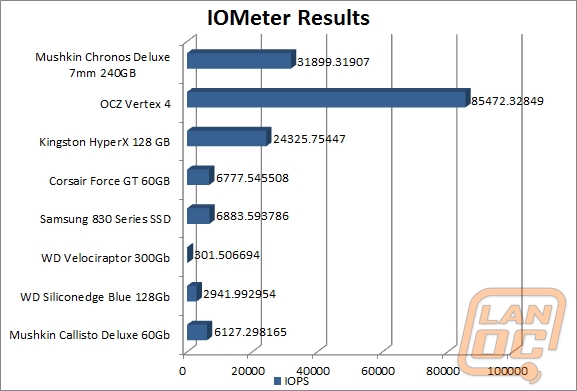 This benchmark through me off, although the Chronos Delux 7mm performed similar to the Corsair drive with the same Controller, the numbers still left a lot to be desired. It didn’t even come close to the results we saw with the Kingston drive, let alone the Vertex 4. I suspect that its troubles with high queue length testing was showing through here once again. 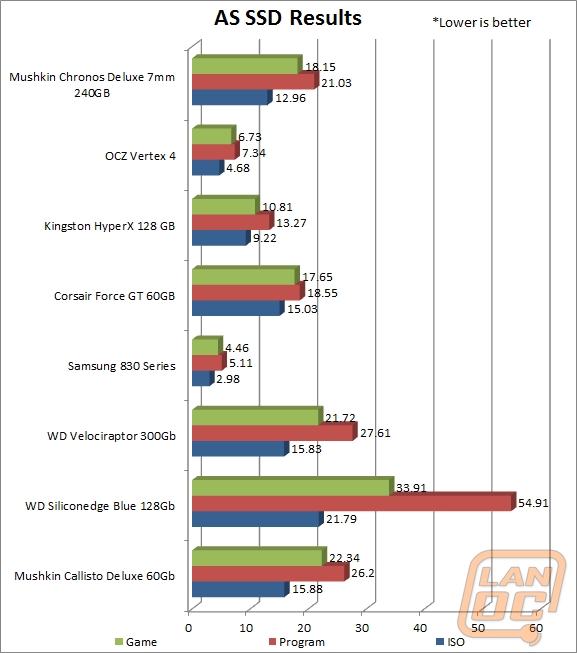 Completely the opposite of the results we saw from AS SSD, our Passmark benchmarks matched up with what we saw in CrystalDiscMark. The Chronos Deluxe 7mm stomped all of the other drives in everything but database benchmarks, with the Vertex 4 pulling ahead there. In fact we saw numbers in web server and file server benchmarks that are approaching on the same numbers we saw in CDM, something that never happens. 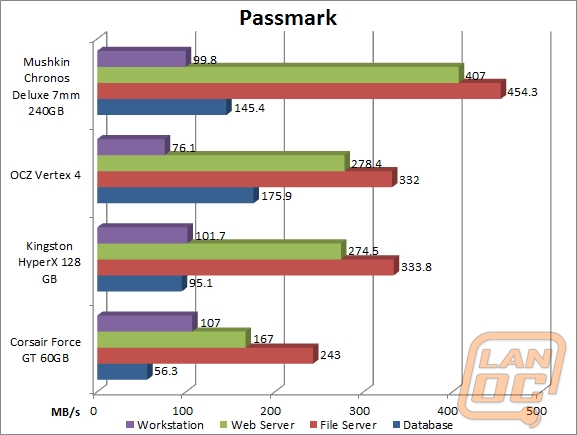 Mushkin has clearly improved on things from when we took a look at their Callisto Deluxe, their new Chronos Deluxe 7mm topped or matched the competition in most of our benchmarks and just plain dwarfed the Callisto’s numbers. Much like other Sandforce SF-2281 based SSD’s it did leave a little to be desired when it came to high queue length testing, but it’s pure read and write speed was great. Along with support from a US based company, the drive should be on your list of drives to consider when shopping. As I mentioned before, it might not matter to most people, but I would love to see Mushkin take a similar drive and spice things up with a little more color or style and create more of a performance lineup. There naming currently is a little confusing as well. This won’t and didn’t affect the performance of the Chronos Deluxe 7mm, but it would sure help catch your eye when shopping. Until then you will just have to remember to keep an eye out for Mushkin’s offerings, they are a diamond in the rough. 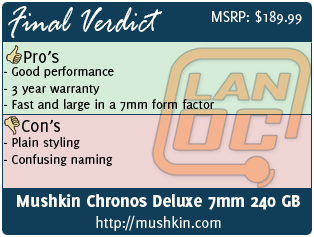 You might call him obsessed or just a hardcore geek. Wes's obsession with gaming hardware and gadgets isn't anything new, he could be found taking things apart even as a child. When not poking around in PC's he can be found playing League of Legends, Awesomenauts, or Civilization 5 or watching a wide variety of TV shows and Movies. A car guy at heart, the same things that draw him into tweaking cars apply when building good looking fast computers. If you are interested in writing for Wes here at LanOC you can reach out to him directly using our contact form.
Discuss this article
Log in to comment
Posts in discussion: Mushkin Chronos Deluxe 7mm 240 GB

Looks good though. Plain styling, really? You'll never really see it. Then again, some colored LED's might go a long way with some of the case modders. Just saying, lol.

As I said in the review, its not a big deal for most. But I would be willing to bet that it would catch a few more eyes. When you consider that we have a lot of drives using the same controller in the same price range. Something like that would stand out.

Here are drives from some of the other manufactures. Some still do sell the black boxed ssd's as well. But most have made there top of the line drives stand out. This is no different than ram as well. 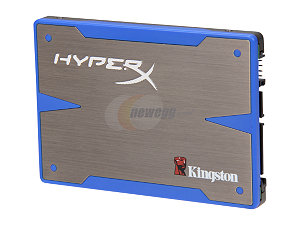 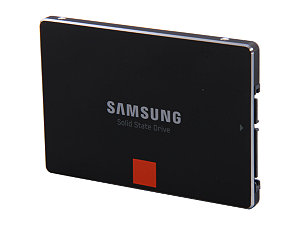 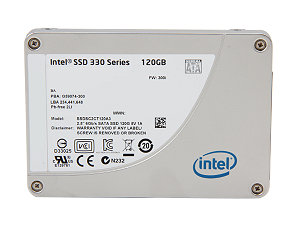 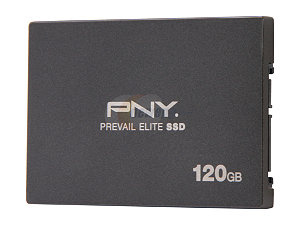 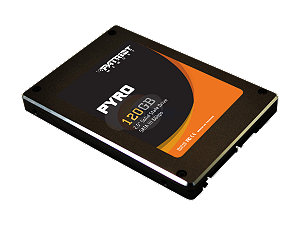 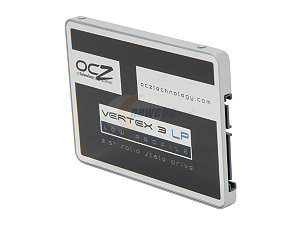 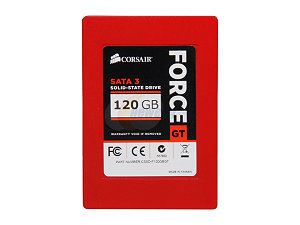 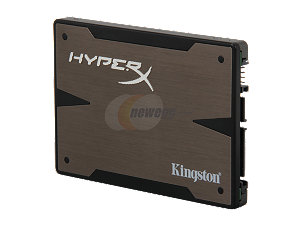 garfi3ld replied the topic: #28476 21 Nov 2012 21:12
Also we are starting to see cases come in with SSD mounts right under the motherboards. Similar to what I did a few years ago on my last build 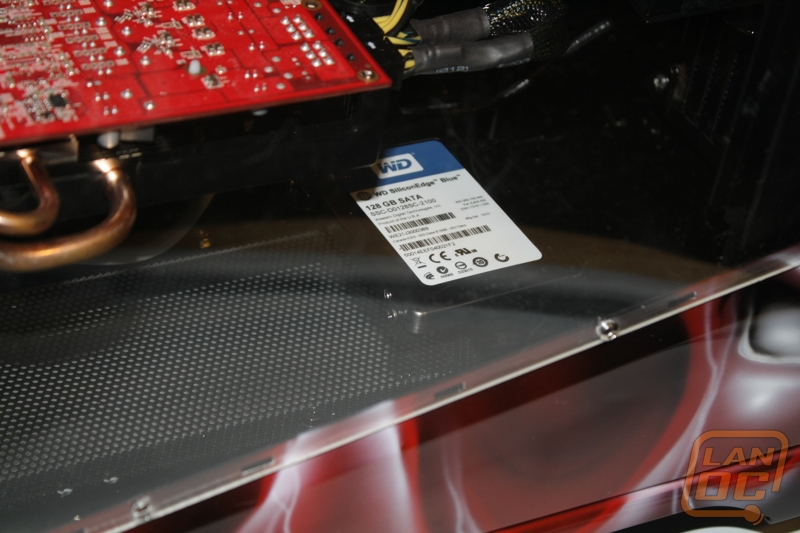 I guess its a use by use basis. Laptop=doesn't matter, Desktop=matters.

I would still like to see some one do something crazy with the casesing.

Wooderson replied the topic: #28481 22 Nov 2012 02:10
I have used Mushkin's ram in my past few builds with zero issues. I have Mushkin Redline in my current PC, and the red color of the ram "went a long way with this case modder" (Wingless LoL). After all its the attention to details that makes the difference. I might have to give the Muskin Chronos Deluxe a spin in my next build.
Read More...

We have 661 guests and one member online