Having seen what ioSafe could offer a few years ago at CES as well as this year with their tesla coil demonstration again at CES, I could tell right away that they stand behind their product and trust that it will hold up in the craziest situations. Between that and the data recovery guarantee that ioSafe puts on the Rugged Portable I expected it to hold up to our tests. What I was surprised about was the performance of the 5400 RPM hard drive inside of the enclosure. Paired with USB 3.0, the drive was able to reach speeds that we only saw on 7200 RPM drives just a few years ago. I expected my biggest complaint about the drive to be about its speed, and it’s true that I would still love to see this in a 7200 RPM version, but with a read and write speed of 120MB/s it will be more than enough for most activity’s. It still does seem a little crazy to make 7200 RPM an option and I hope this is something they consider in the future.  Beyond that the only other thing I would love to see considered is fire protection. ioSafe made their name originally focusing on fire protection of hard drives but this portable drive is not safe against fires. I’m sure this has everything to do with portability and weight, but it literally the only thing preventing this drive from being indestructible. But having said that I can’t fault ioSafe for not going to that extent, making the rugged portable fireproof would mean we would be carrying around a drive that is three times the size of the current enclosure that also weighs considerably more. I know that the next time I travel, considering how well the airlines take care of my baggage, I will be taking the Rugged Portable along with me. 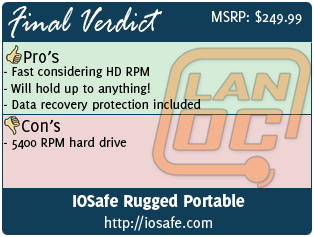 *** ioSafe responeded about our concerns with the 5400 RPM hard drive**

"Speed is limited by a combination of the drive, the controller and the operating system. In most real-world situations, a 7400 RPM drive will provide either the exact same or only minimally better performance than a 5400. It's a trade-off - albeit a small one - but we think most people would rather a less expensive drive than a more costly one that may or may not deliver better performance."

You might call him obsessed or just a hardcore geek. Wes's obsession with gaming hardware and gadgets isn't anything new, he could be found taking things apart even as a child. When not poking around in PC's he can be found playing League of Legends, Awesomenauts, or Civilization 5 or watching a wide variety of TV shows and Movies. A car guy at heart, the same things that draw him into tweaking cars apply when building good looking fast computers. If you are interested in writing for Wes here at LanOC you can reach out to him directly using our contact form.
Discuss this article
Log in to comment
Posts in discussion: IOSafe Rugged Portable

We have 640 guests and one member online