We used to work closely with Mushkin as far back as our first few LAN parties but over the past few years that communication slowed down. This year at CES we had a chance to catch up and see what they have been up to, and we were happy to see that on top of staying in the RAM market they have also introduced a couple SSD’s. Their newest SSD is called the Callisto Deluxe, and we will be taking an in depth look at it today. Sporting the SandForce SF-1200 controller and promising read speeds of up to 285MB/s and write speeds of up to 275MB/s, it sounds like it’s a perfect match for the Mushkin name. Of course there is only one way to find out; let’s jump in. 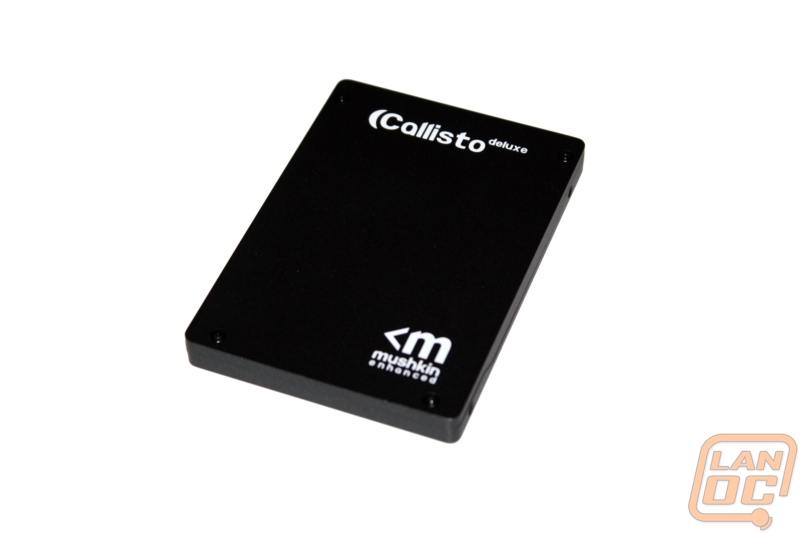 Mushkin packaged the Callisto Deluxe in a black box with little information on the drive outside of its name and the Mushkin logo. The capacity and model number are on a small sticker, the packaging is obviously universal to all of the Callisto Deluxe models, similar to what we see on RAM packaging. Around back there is a short description that doesn’t give away too much, but they are sure to point out the drive's TRIM support. Inside the package the drive was protected by an excessive amount of padding, three to four times as much as we have seen on other SSD’s. Inside that padding the drive is covered by the 2.5 to 3.5 inch adapter. There are also a few screws in a small bag tucked under the SSD in a cutout in the padding. 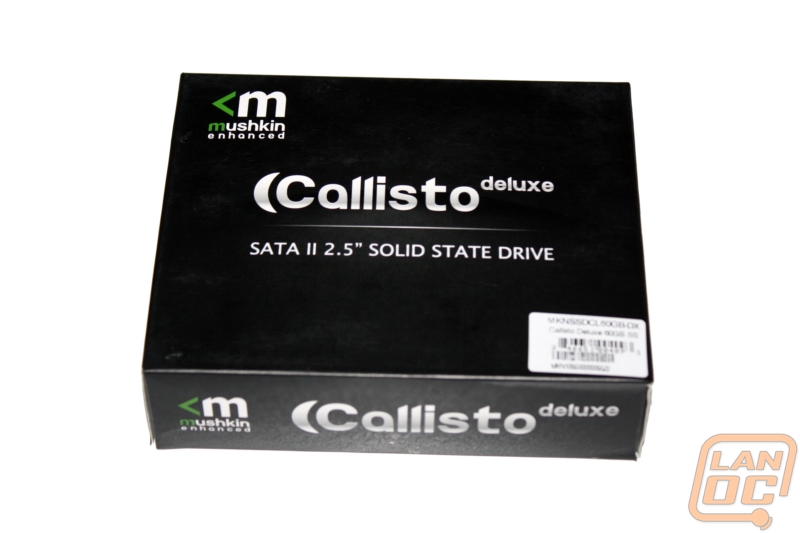 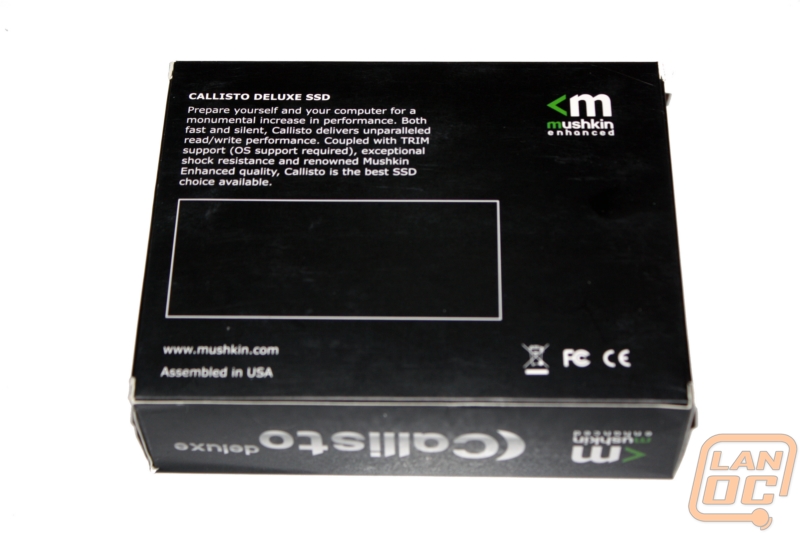 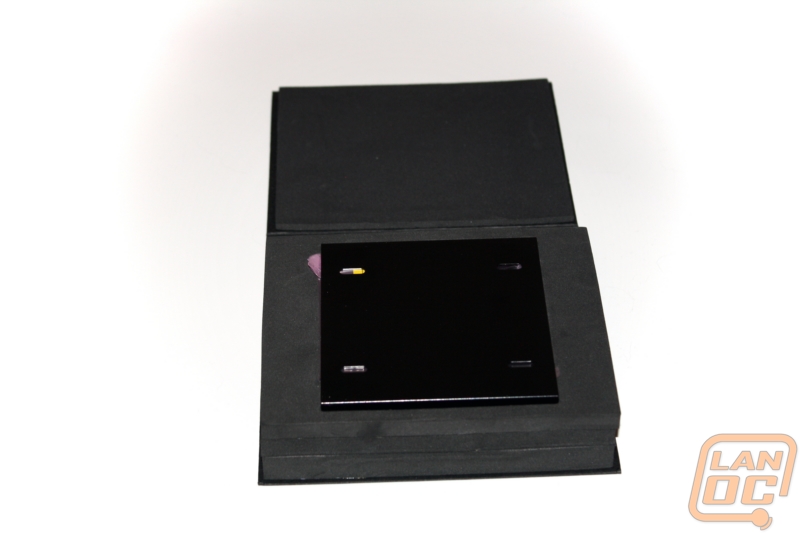 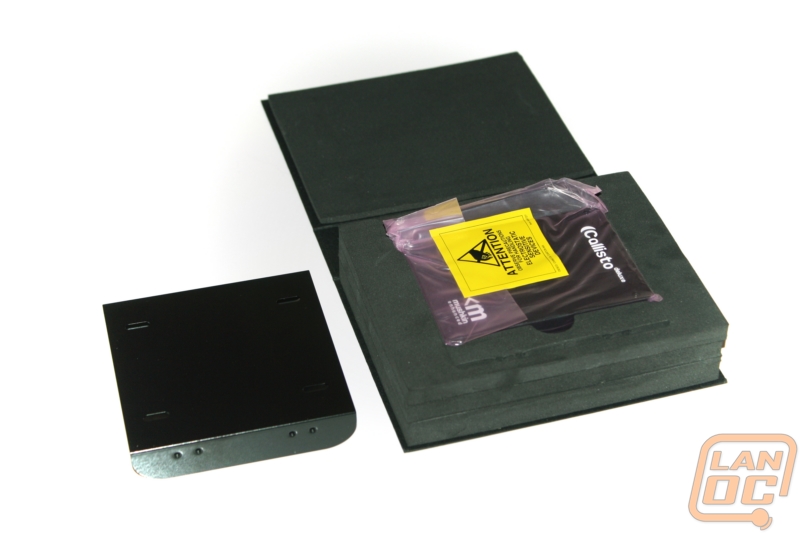 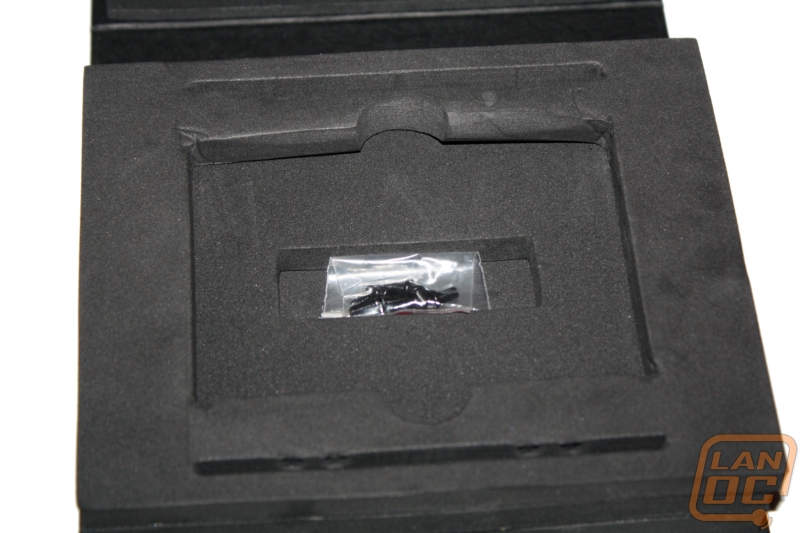 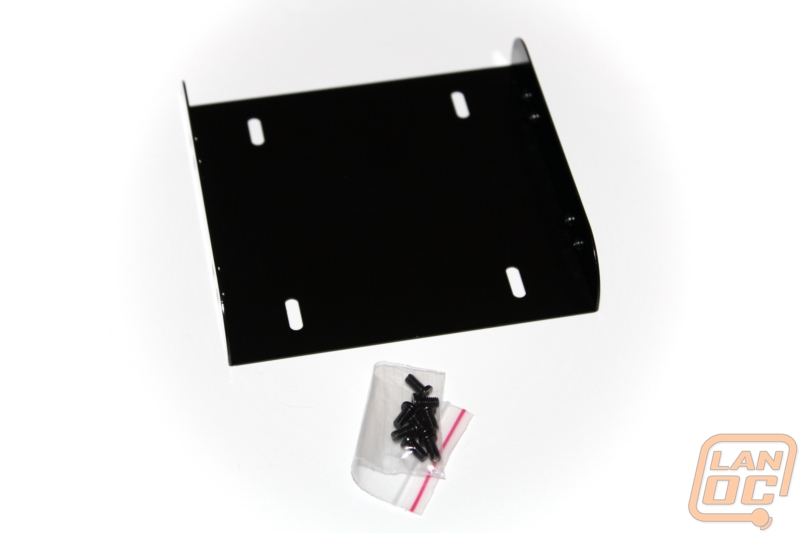 After carefully pulling the Callisto apart to dig out its creamy filling we came out with its PCB. Right in the middle of all of the flash sits the Sandforce controller. The controller label has sf-1222TA3-SBH for its model number, the Sandforce 1200 based controller that can be found in devices from both OCZ and Corsair also among others. Both the front and back of the PCB have 8 Intel 29F32G08AAMDB MLC flash memory chips giving a total of 16. Anyone with a calculator handy would know that with 16 flash chips and a capacity of 64 gigs, means each of the Intel flash chips has a density of 4GB. 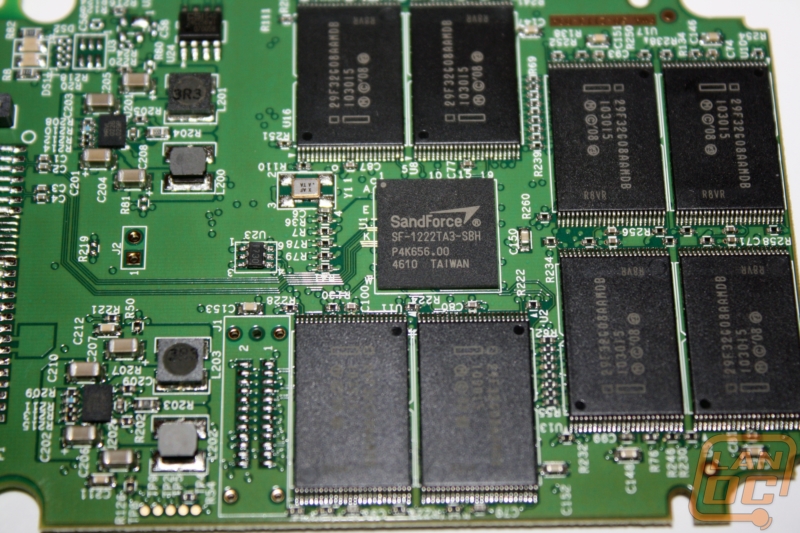 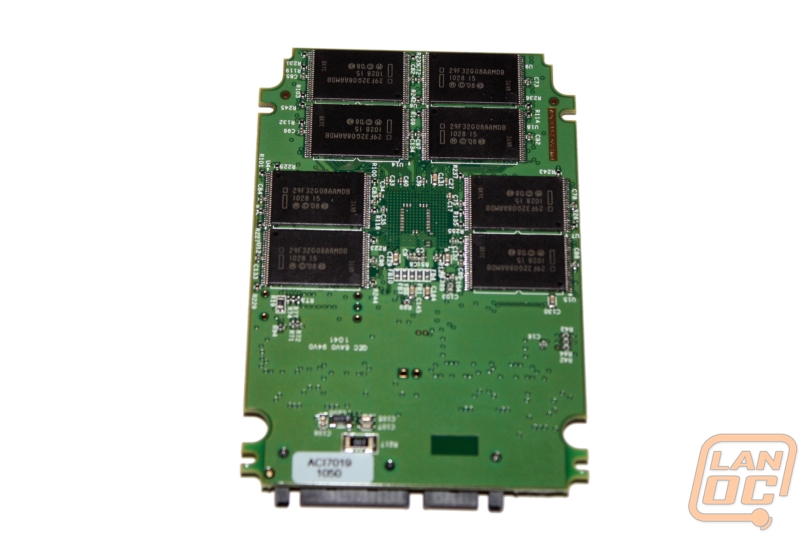 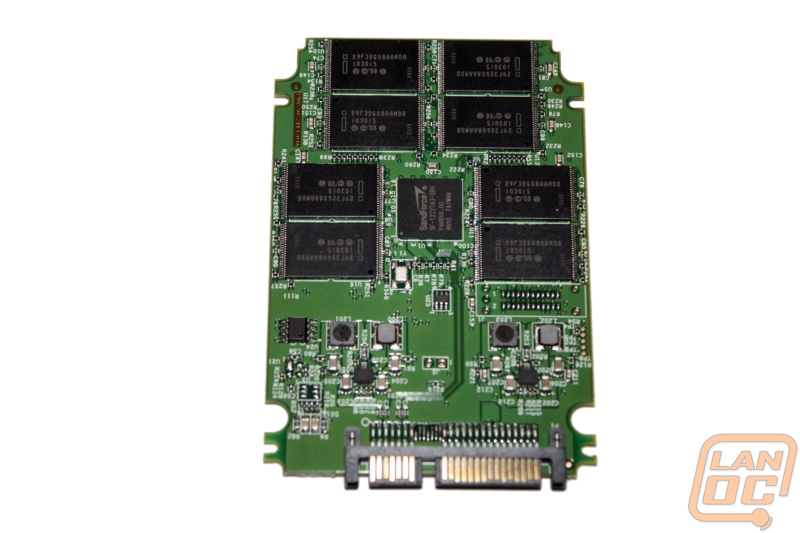 It’s been a long time between this review and our last SSD/hard drive review. Because of that we found this to be a perfect chance to change up our tests to something a little more in depth from our past reviews. Because of that our performance results for the Callisto Deluxe don’t have many results to compare too. Our results will grow soon as we cover a few other SSD’s in the near future. 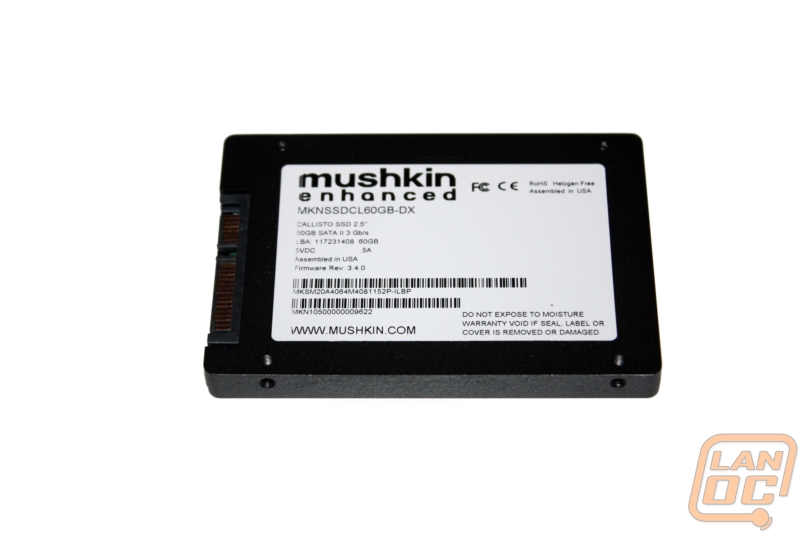 Mushkin’s Callisto Deluxe outperformed the other drives on every single hard drive test AIDA64 had. Reaching an impressive 299.3 on the Random Read speeds left the Velociraptor in the dust with well over three times the read speed. 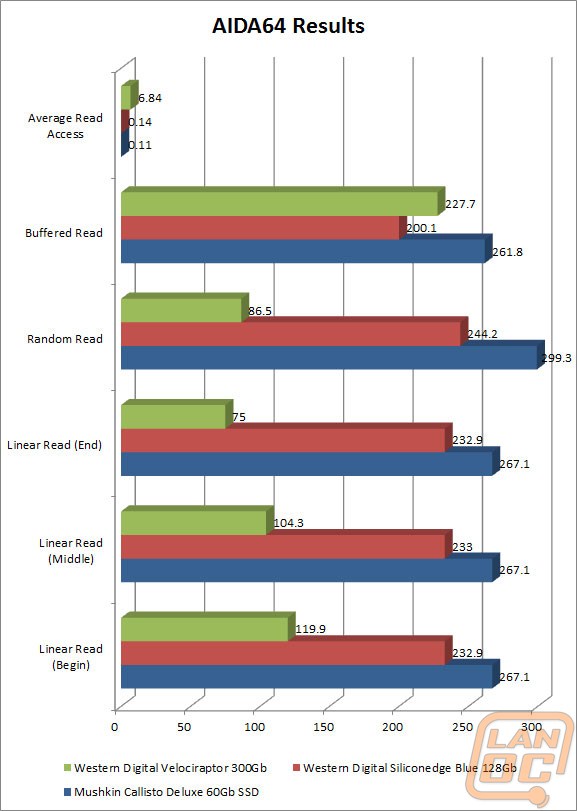 Because AS SSD’s standard test results duplicate the tests run by CrystalDiskMark we run their secondary benchmarks that duplicate Game, Program, and ISO transfer speeds. The results are considerably different than a standard benchmark; all of our results are shown in the amount of time needed for the test to complete. Even with the different results the Callisto Deluxe still out performs the others. 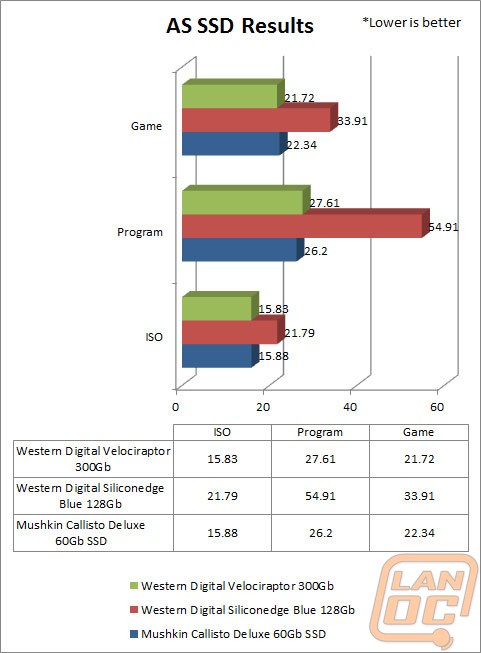 ATTO does a good job of showing total transfer rate for each Transfer size. To keep things simple I have only included 5 of the transfer sizes. All of the results other than the 16KB results have the Callisto ahead by a wide range. The 16LB results are a fluke with the buffer on the Velocirapter skewing them. At its peak the Callisto Deluxe reached a respectable 279038 with the Siliconedge Blue far behind with a 235987 in the read results. 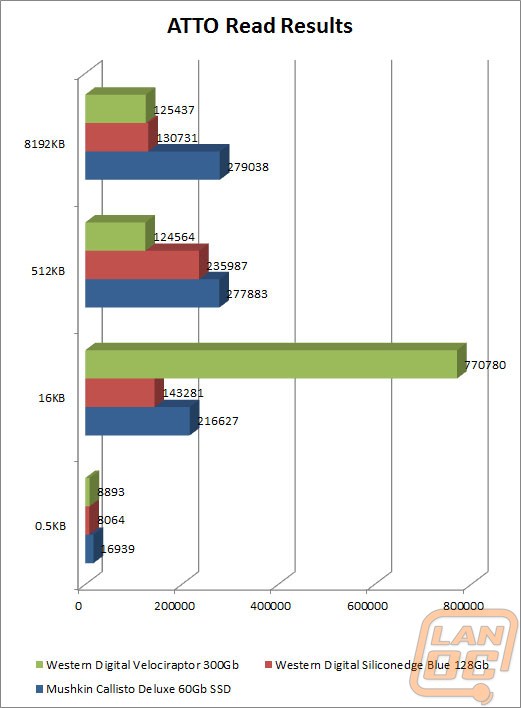 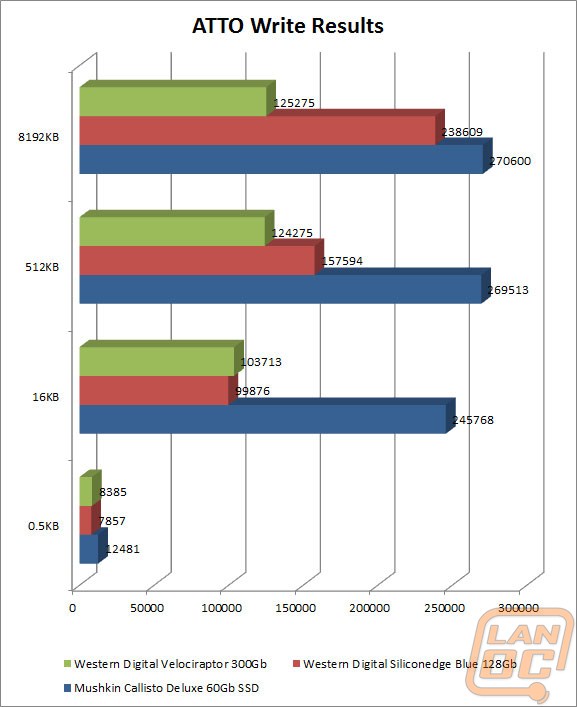 This is where the Callisto really started to spread its wings. Every single benchmark bested the competition by at least double and considerably more on the 4K QD32 test. With a read speed of 272.4, the Callisto Deluxe is pushing the limits of the SATA 2 interface. Its Write speeds are close behind at a respectable 265. The results for the 4K QD32 Write show that the Callisto Deluxe handles an I/O queue very well, better than anything we put against it. 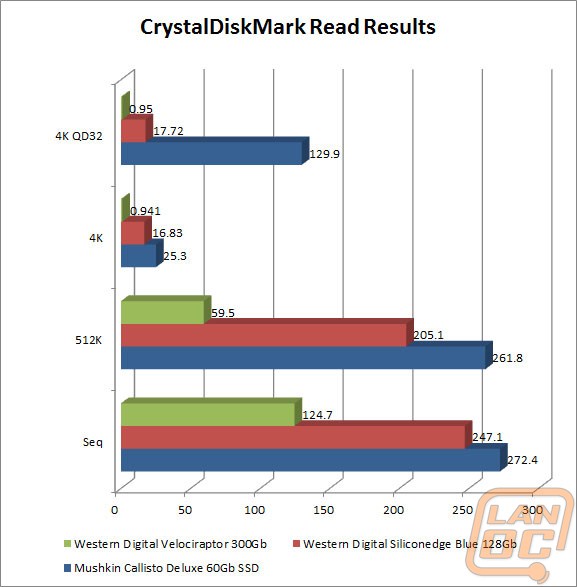 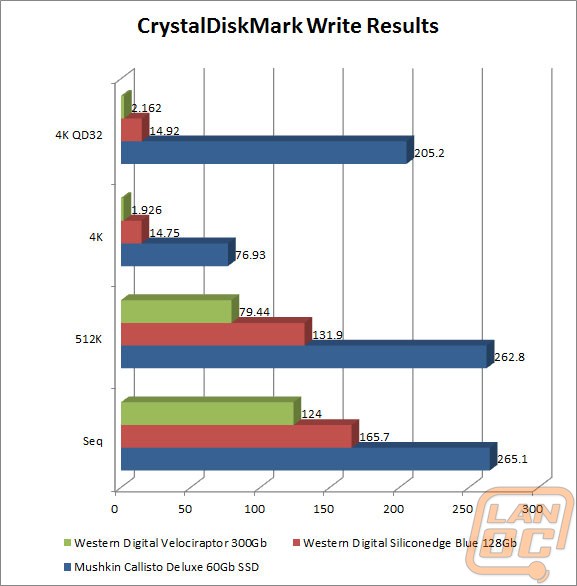 At double the IOPS than the Siliconedge it wasn’t even a competition. 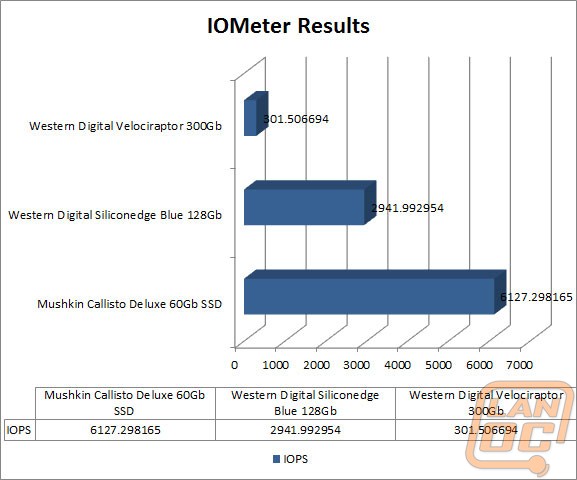 PCMark’s hard drive benchmarks don’t always respond as predictably as a standard benchmark. Even though on most of our other tests the Callisto Deluxe outperformed the Siliconedge by double, in PCMark the difference was a lot closer. Other than the importing pictures benchmark where the Western Digital drive flipped things around and took a lead. Every other test still had the Callisto Deluxe in the lead, consistently. 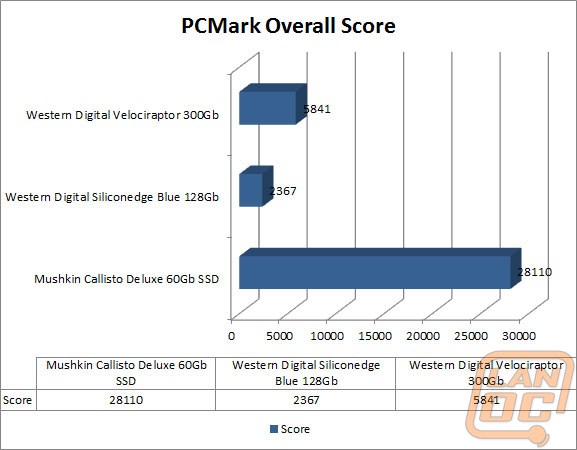 Because of delays on publishing this review, mostly due to issues unrelated to the Callisto Deluxe, this review is a little less exciting as it would have been when we originally received this drive. With SATA 3 SSD’s trickling out I am excited to see what Mushkin will have to offer. As they have shown us in the past, they will take their time to join the market. Only when they truly have something to offer will they introduce their products. They might have been able to jump head first into emerging markets like SSD’s but they didn’t. To me this develops a layer of trust. I trust that when Mushkin brings something to market it will be something to be excited about. Heck even months later I am impressed with the Callisto Deluxe’s performance, as they introduce there SATA 3 Chronos. I would still recommend picking one up as long as the price is right. But if you are looking for a little more speed there newly introduced Chronos will also fit the bill. The only problem with the Callisto Deluxe is the typical price you will find them for, but this has everything to do with them being replaced. Mushkin's newer faster SATA 3 drives are priced much more competalivly. Had we covered this unit in time, the price would have been right. We can't fault Mushkin for that. 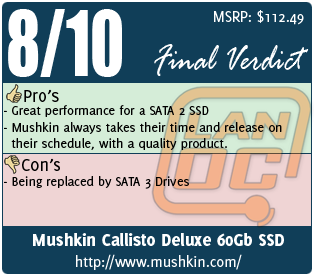 You might call him obsessed or just a hardcore geek. Wes's obsession with gaming hardware and gadgets isn't anything new, he could be found taking things apart even as a child. When not poking around in PC's he can be found playing League of Legends, Awesomenauts, or Civilization 5 or watching a wide variety of TV shows and Movies. A car guy at heart, the same things that draw him into tweaking cars apply when building good looking fast computers. If you are interested in writing for Wes here at LanOC you can reach out to him directly using our contact form.
Discuss this article
Log in to comment
Posts in discussion: Mushkin Callisto Deluxe 60Gb SSD

We have 1582 guests and one member online