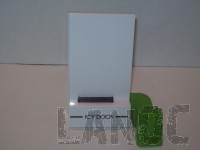 There are a lot of reasons one may have use for a docking station such as this: simply having multiple hard drives, having data stored on a smaller 2.5" drive that needs accessed, or simply not enough room to install another drive in a case or laptop itself. The EZ-Dock provides solutions for all the above, including access to data and files without the trouble of physically installing a single piece of hardware (unless your case is absent an eSATA port, in which case Icy Dock has provided a quick fix). With such an involved piece of hardware, there are several instances in which a company can go wrong, and with such a micro-managed field technology is, even the smallest quirk can cause problems. Today, we take a look at Icy Dock's EZ-Dock to see how well it performs under the stress of data access.

Simple and secure; two areas that are more often than not considered opposites. Icy Dock, however, has achieved both with a tough plastic mold, fit snuggly around the drive itself, a box that safe holds all the necessary cords, accessories, and manuals, and an easy fastening design, featuring just two indents on either side of the model that snap together to hold the right and left sides of the packaging together well. No knife or scissors are required to open; just snap apart the buttons and the two sides fold apart. Inside, the docking station sits in its own plastic cove pre-assembled. Assembly of the station is only a latch on the back that is pressed, allowing the metal stand to slide in and out for the stand. Below the docking station is a cardboard box, the sides of which are illustrated with images, specifications, features, and instructions. Inside is the included leather carrying case and a manual (which is, in all honest, a little scarce of information and in several languages). And inside the leather carrying case, Icy Dock has organized all the essentials: power cord, AC adapter, USB cable, eSATA cable, and even an eSATA port bracket to install in case your PC doesn't already include one. 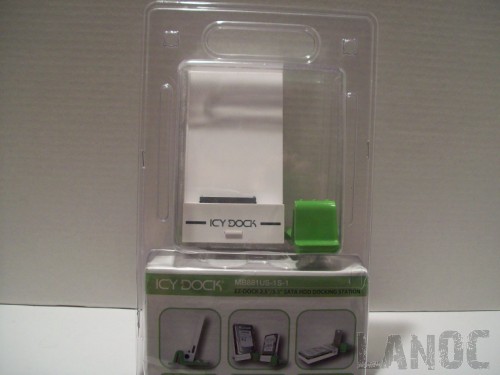 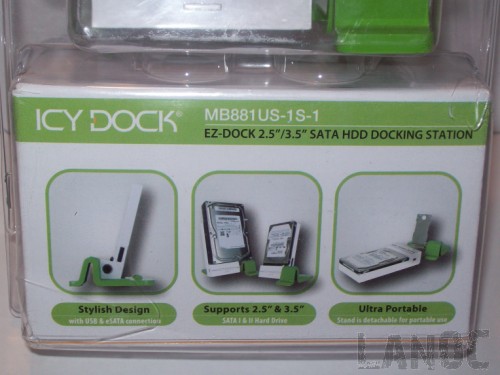 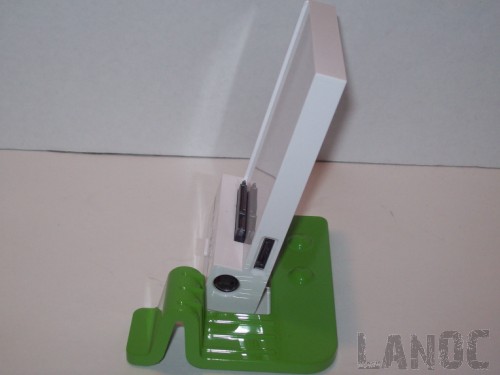 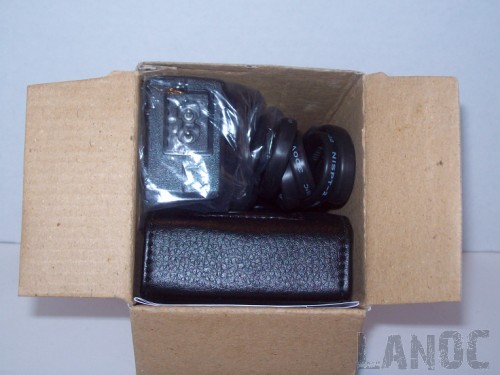 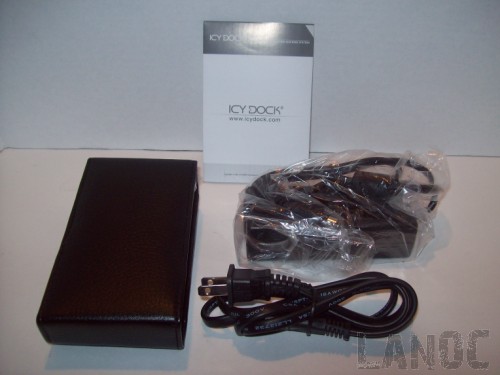 If your PC doesn't have an eSATA port, you'll need to install the included port bracket. The entire process takes maybe five minutes, involving placing the bracket in an open slot, securing it in place (screw included!), and connecting the port to an open SATA port on your motherboard. However, if your case has an eSATA port, you can skip past any installation to the computer. Simply plug the power cord into the dock, plug the included SATA cord from the dock to the eSATA port, and switch it on. 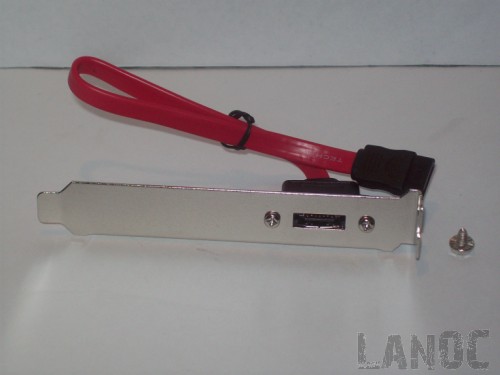 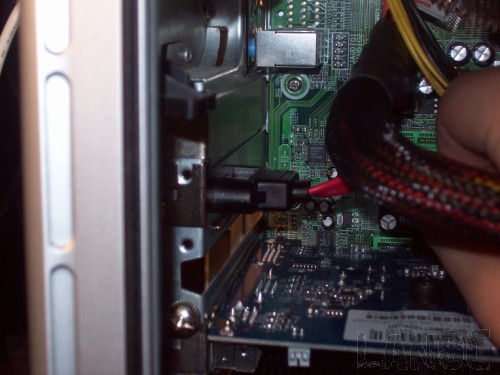 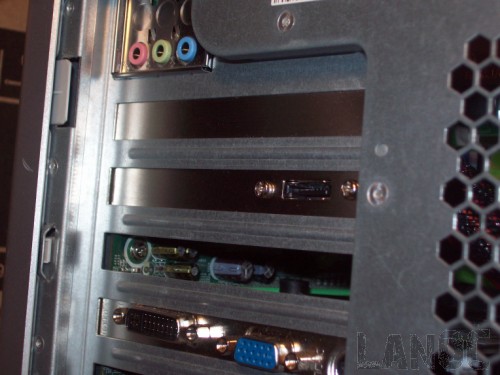 But what you just have a laptop, which traditionally and commonly don't include an eSATA or have the option of installing one? Icy Dock has included the option to run the dock off of USB as well, requiring two ports. This not only allows for use with laptops (which is a very simple alternative to upgrading a hard drive in a laptop), but it also allows the EZ-Dock to double as a portable external hard drive. Simply detach the metal stand, insert the dock with 2.5" hard drive into the carry case, and viola! The EZ-Dock is Hot Swap ready, so when you're using it as a docking back both 2.5" and 3.5" drives can be swapped in and out with any problems. 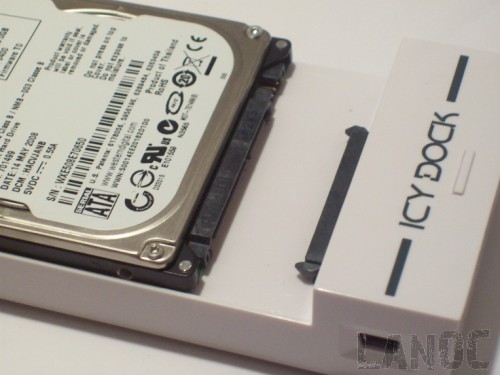 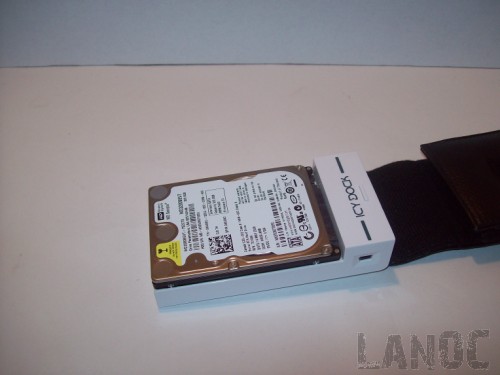 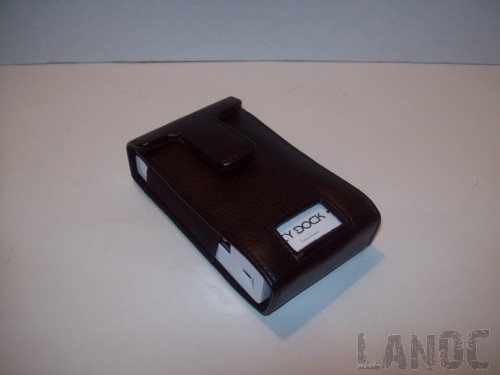 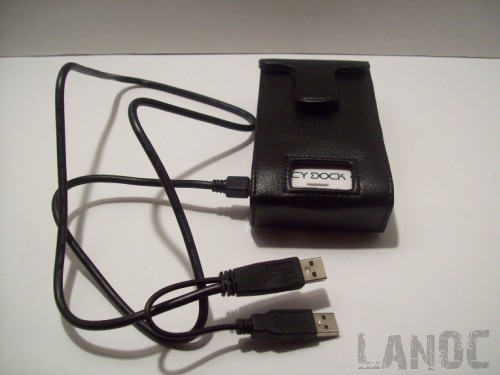 There is also no software to install; the drive is automatically read and displayed as a separate local disk. In my case, I happened to have a 320Gb 2.5" hard drive out of a laptop I had sent to have the video card looked at. The hard drive was full of data, including games, music, videos, files, and even an operating system (Vista). Using the EZ-Dock with my desktop (running XP), there were no problems whatsoever; the drive was detected right away and fully accessible, with all my data intact. 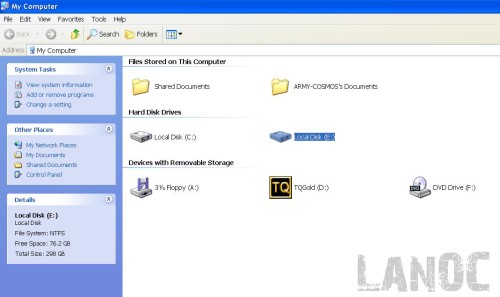 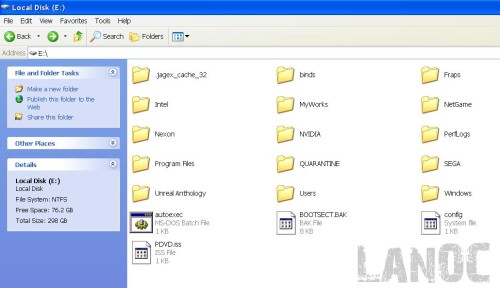 The EZ-Dock, as mentioned, supports both 2.5" and 3.5" hard drives, and is compatible with both PCs and Macs. The docking system is Hot Swap ready, so multiple hard drives can be exchanged in and out. And since the dock is primarily connected through eSATA, Icy Dock maximizes data read performance. The dock itself is 106x92x126 mm (4.17x3.62x4.96 in) and weighs 265.3g (0.58lbs), In other words, its extremely portable. The EZ-Dock MB881US-1S-1 model supports hard drives up to 2TB, while others commonly max out at 320GB. Transfer rates through eSATA connection is up to 3Gb/sec, and 480Mb/sec when connected through USB 2.0. Given those numbers, we wanted to put the read and write speeds of the dock to the test. So I copied my entire 'Documents' folder from my laptop's hard drive to my PC; a folder that contained 1,675 files with a memory size of 6.13GB. It took a little less than two minutes for the entire folder to transfer. Next was the write speed back on to the hard drive, so I renamed the folder and copied it back on to the drive. Again, the file transfer took less than two minutes to complete.

The EZ-Dock is a great solution to problems that are else-wise expensive, complicated, or unsolvable. Storage can be expanded by simply placing the multiple drives on the dock, including 2.5" drives. As mentioned, this is extremely useful for laptops, that tend to be restrictive when it comes to accessing files outside the original system or expanding the memory storage. Not only does the Icy Dock bring simplicity to the table, but it does it well. Read and write speeds are great, and the drives are read without any problems, desprite operating systems conflicts. Plus, the EZ-Dock supports drives up to sizes of 2TB, instead of a common cap of 320GB. And Icy Dock has done a great job including anything you may need, from an extra eSATA port bracket to the screw needed to install it. There are few downsides to this dock: requiring two USB ports for USB connection, slower speeds when using USB, and the need for an AC adapter can get irritating and find itself in the way. However, the benefits largely outweigh those issues. The EZ-Dock MB881US-1S-1 is a great bay that does it job and does it right. 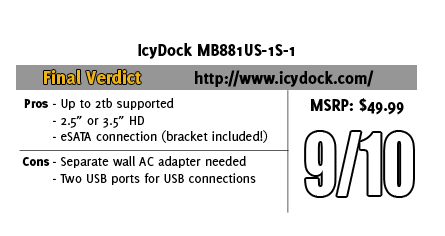 You might call him obsessed or just a hardcore geek. Wes's obsession with gaming hardware and gadgets isn't anything new, he could be found taking things apart even as a child. When not poking around in PC's he can be found playing League of Legends, Awesomenauts, or Civilization 5 or watching a wide variety of TV shows and Movies. A car guy at heart, the same things that draw him into tweaking cars apply when building good looking fast computers. If you are interested in writing for Wes here at LanOC you can reach out to him directly using our contact form.
Discuss this article
Log in to comment
Posts in discussion: Icy Dock EZ-Dock MB881US-1S-1