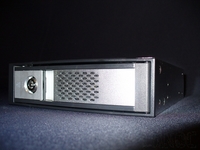 I’m sure you remember that amazing external hard drive enclosure from IcyDock that we reviewed a while back. They produce a wide variety of enclosures including internal enclosures. They sent one out for review to us and it just happened to come right before we packed up to go to showdown lan a while back. What a perfect chance to put the enclosure through its paces and to see what other people thought of it. Plus it was a great way to have one less thing to pack and we could leave the last Icy Dock enclosure at home. Find out how it performed and what everyone thought of it below. 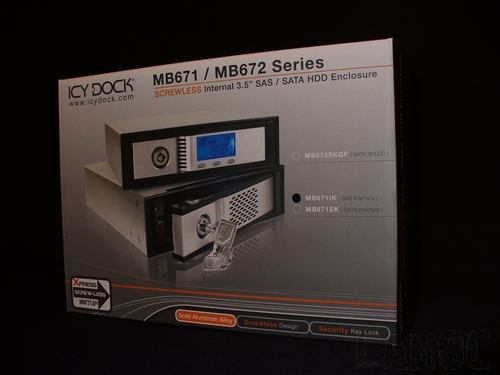 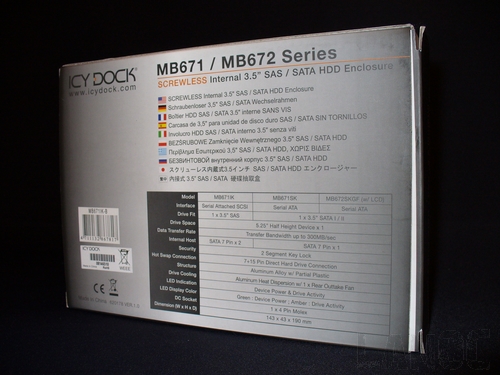 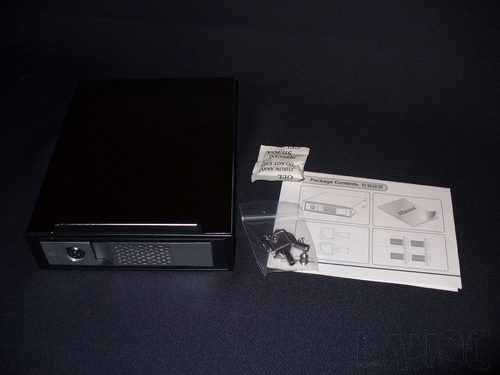 The MB671IK internal enclosure came packed tightly away in a mostly gray box. The front includes pictures of this model and a step up that includes a LCD readout screen. Our model also comes in a standard SATA and SAS interface. IcyDock provided us with the SAS model. We don’t have a SAS controller or hard drive but it works fine with the standard SATA drives also. You can tell witch model is in the box by the placement of the black dot. This was a way for them to save money and use the same package on three different but simile models. On the front you will also find the three main features on the enclosure; a screwless design, security key lock, and Solid Aluminum construction. On the back they have listed off the specs of each of the three models. That’s really the only important thing you will find on the back. Inside they have packed the enclosure in bubble wrap and it fits tightly in the box. All of the included screws, keys, and instructions all were inside of the enclosure itself to keep them safe. Overall I found the packaging to be effective but it lacks the style that the last IcyDock enclosure had. In the end it’s not that important, once you pull the product out of the box you won’t deal with it again. 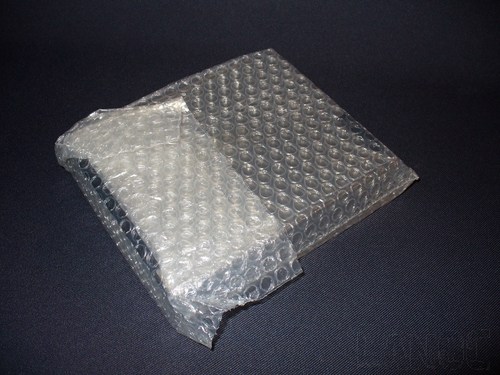 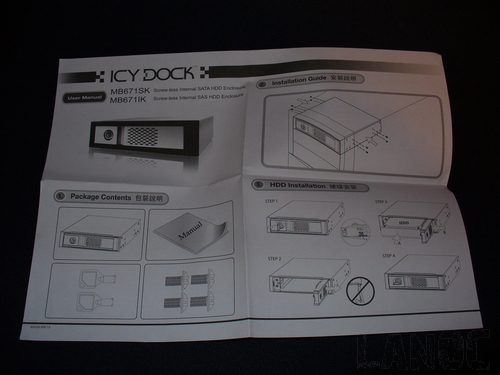 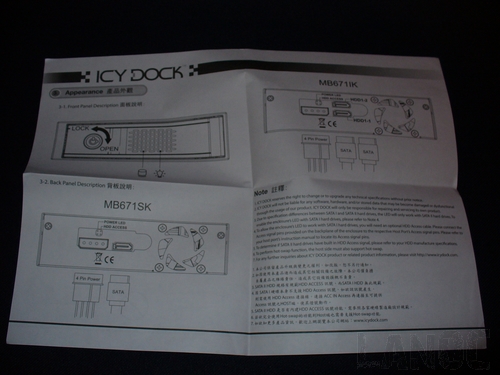 Like I said before, this came right before we left for ShowDownLan so it was installed the night before we left. The installation was simple, especially with the screwless 5 ¼ drive slots in our Thermaltake Armor + MX. In fact it was as simple as sliding it in, I did include one screw just to prevent any vibrations in the future. Once installed I did notice that the front sticks out of the case a small amount, not enough to bother most people but if you are extremely picky this could bother you. Next you find a Molex connector and hook it up to provide power. They have included a plug for hooking up your case HD access LED if this is going to be your main hard drive. In order for things to work you have to hook up the SAS/ SATA cables. SAS just requires two SATA hookups so if you are like us and only have a standard SATA drive to hook up you can do that by plugging in just one SATA cable into the black connection. Lastly we have to put our hard drive in. We will be using a Seagate 750 that we have used in past testing. The door opens easily by pulling on the latch and the hard drive slides in without any screws or hassles. The door closes as easily as it opened; I recommend that if you will be traveling to use the key to lock your hard drive up. It is just too easy and quick to remove the drive; someone at a lan could snatch it without you even knowing. 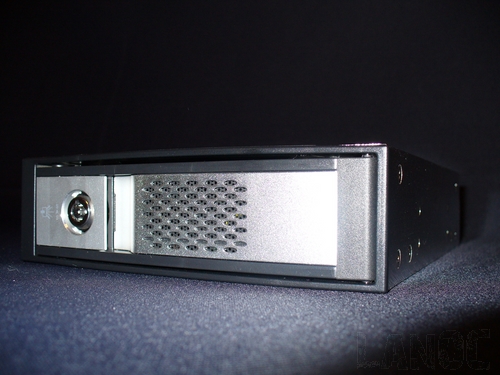 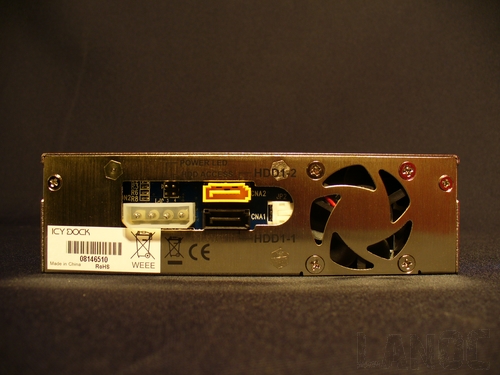 The MB671IK performed great as you will see in the graphs below. My biggest worry was if it would cool the hard drive properly. Considering the hard drive is packed into aluminum box with just a small fan it stayed fairly cool. On average the fans inside my case were at 32 degrees and the 750 in the IcyDock enclosure was about 10 degrees warmer at 42 degrees. I would have liked to of seen cooler, but it also isn’t fair to compare a hot swap enclosure against a pc case with a lot of cooling fans. 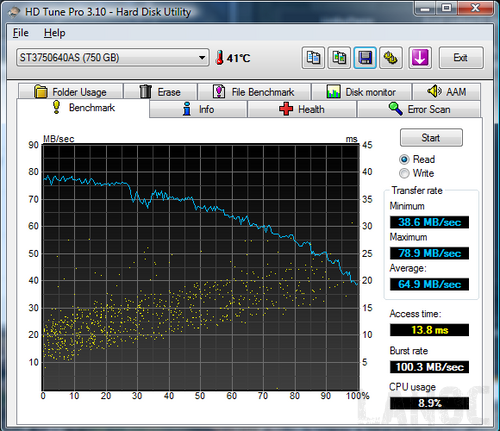 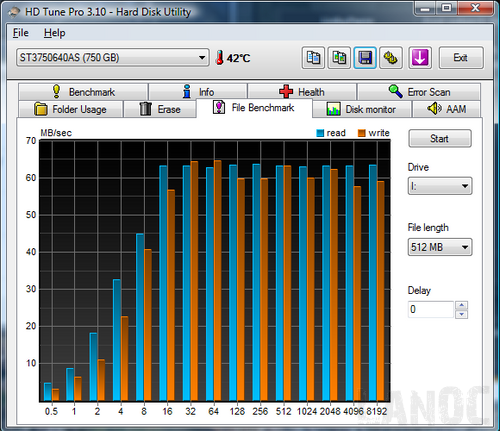 This internal enclosure lived up to the reputation that IcyDock has developed. The ability to hotswap on the fly without having to carry an external enclosure around is a big plus for me. The style of the MB671IK isn’t amazing, at least for our model. I do really dig the look of the model with the LCD on the front that is on the packaging. The performance is on par with the same drive being mounted inside the case so you don’t take any performance hits with the hotswapability. The installation was easy although I did run into the small issue of how it protrudes from the case a little bit. The cooling fan does it job at keeping the hard drive cool. We did see temperatures 10 degrees higher than inside the case, this is lower than most other hard drive enclosures although I would like to see them a little lower. We did get a little feedback on it while we were at Showdownlan, most were inpressed with the ease of removal. I did hear a few comment about how it would look better in black, I think this would be an improvment in the looks department. Overall its not perfect but it is a good performing internal hard drive enclosure, and it defiantly lives up to the IcyDock name. 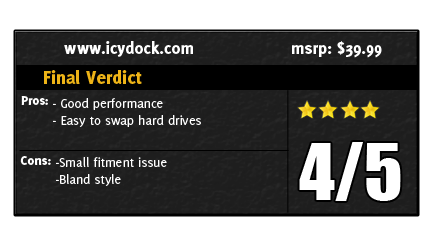 You might call him obsessed or just a hardcore geek. Wes's obsession with gaming hardware and gadgets isn't anything new, he could be found taking things apart even as a child. When not poking around in PC's he can be found playing League of Legends, Awesomenauts, or Civilization 5 or watching a wide variety of TV shows and Movies. A car guy at heart, the same things that draw him into tweaking cars apply when building good looking fast computers. If you are interested in writing for Wes here at LanOC you can reach out to him directly using our contact form.
Discuss this article
Log in to comment
Posts in discussion: Icy Dock MB671IK Internal Enclosure