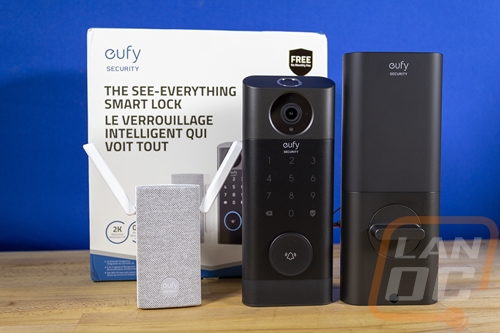 The lock portion of the Video Smart Lock is split into two halves. You have the outside potion and the inside portion of the lock. To start things off let's check out the inside half of the Video Smart Lock. This half is relatively simple in design compared to the front half. It is 195 mm tall or just under 7 ¾ of an inch tall and is 1.18 of an inch thick. It is also all blacked out. You can see that the bottom half has a slightly different finish with that being metal and the top portion is a plastic cover with the eufy Security branding in white up top. This has a manual lock that can be turned to unlock or lock things and that is also metal as well. The back side of this has a rubber finish over it from top to bottom and we can see a few of the mounting screw holes showing through on the back as well as the back side of the lock which has two mounting holes through it as well like a normal deadbolt has. 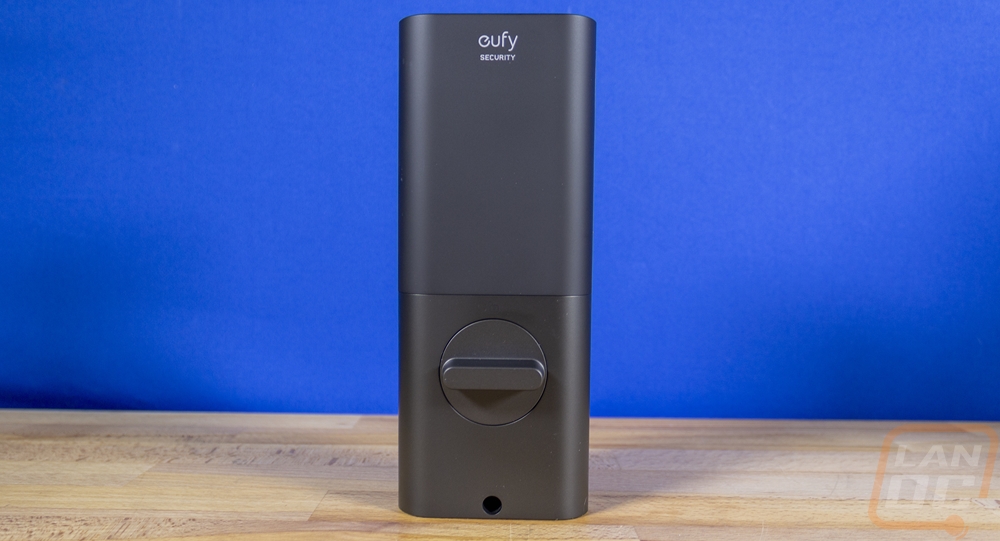 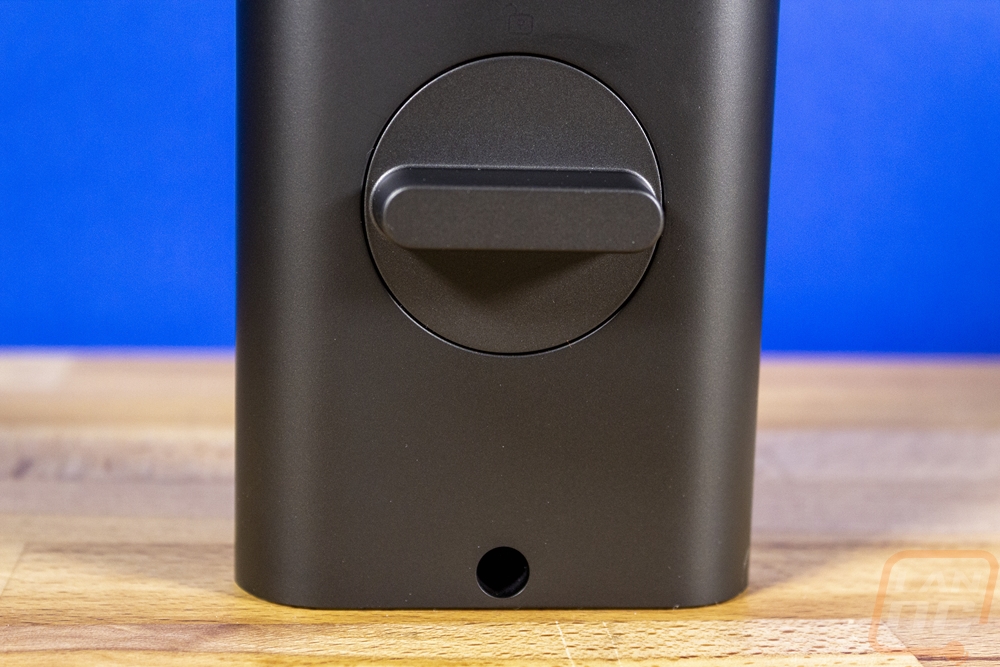 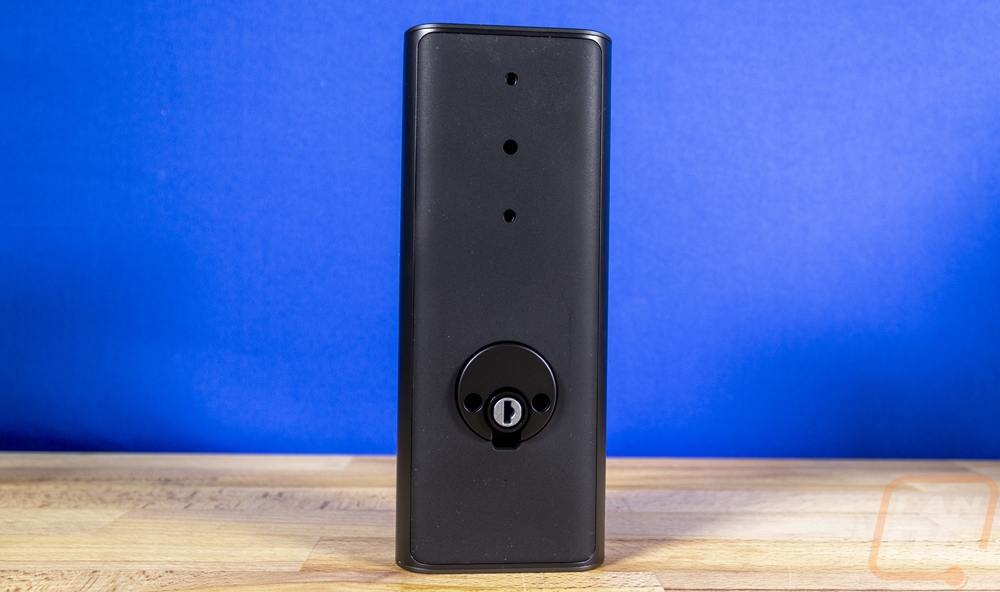 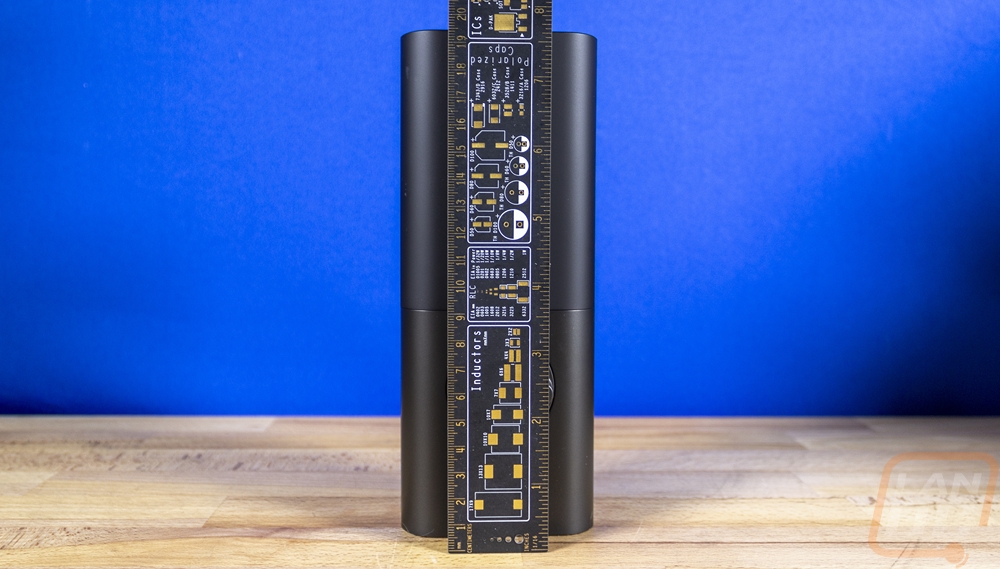 When you pull the plastic cover off, this is where eufy has hidden away the required information which is etched into the back of the battery tray. Then below the battery tray, you have your serial number and a QR code sticker for scanning the Video Smart Lock into the eufy Security app. The sync button is right there with the sticker as well. This is all on the inside of your door where no one can get to it without being inside already. The tray holds the included swappable battery and there are two cutouts on the sides to help you pull the battery out when needed for charging. 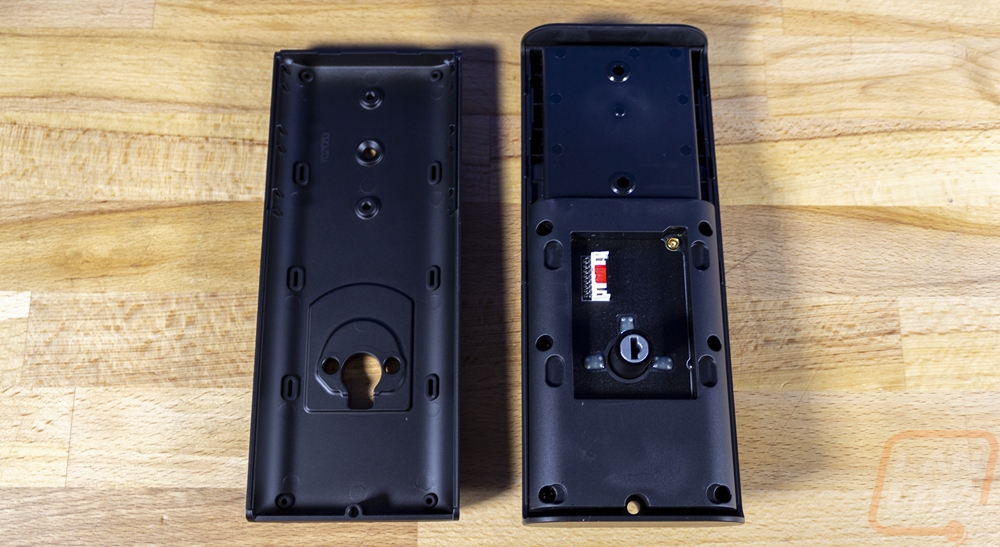 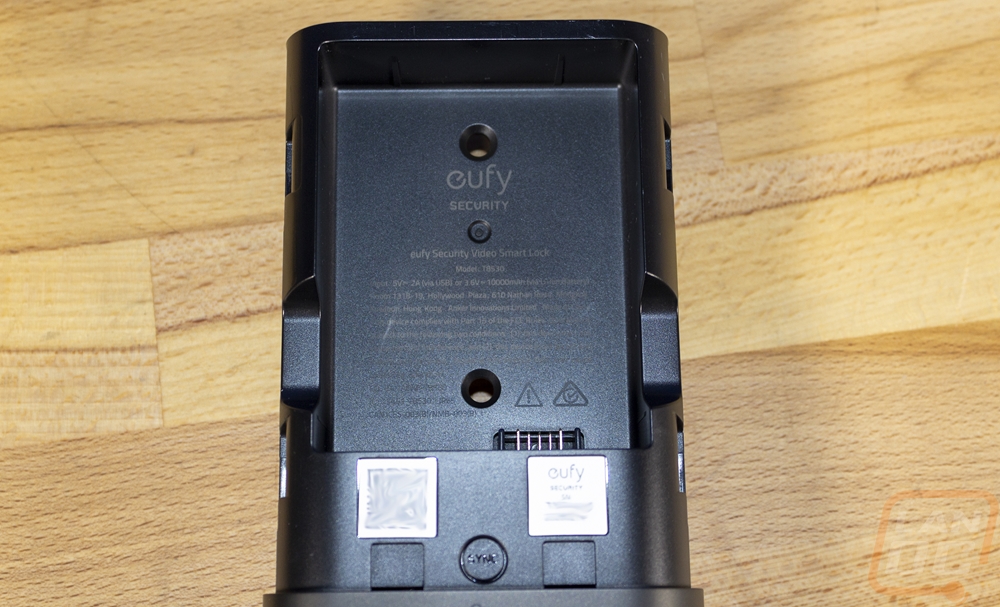 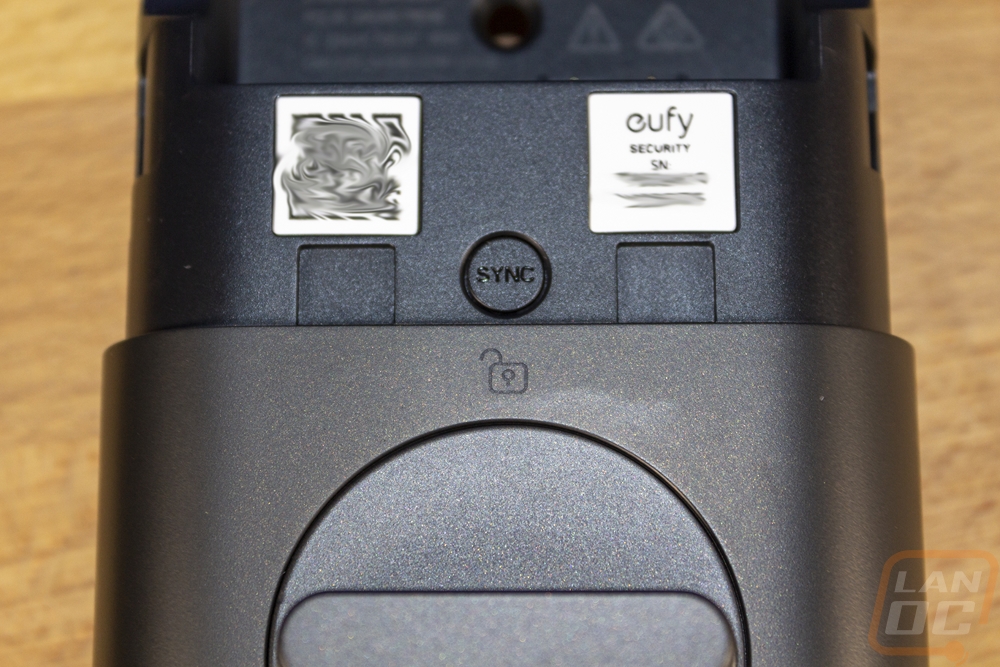 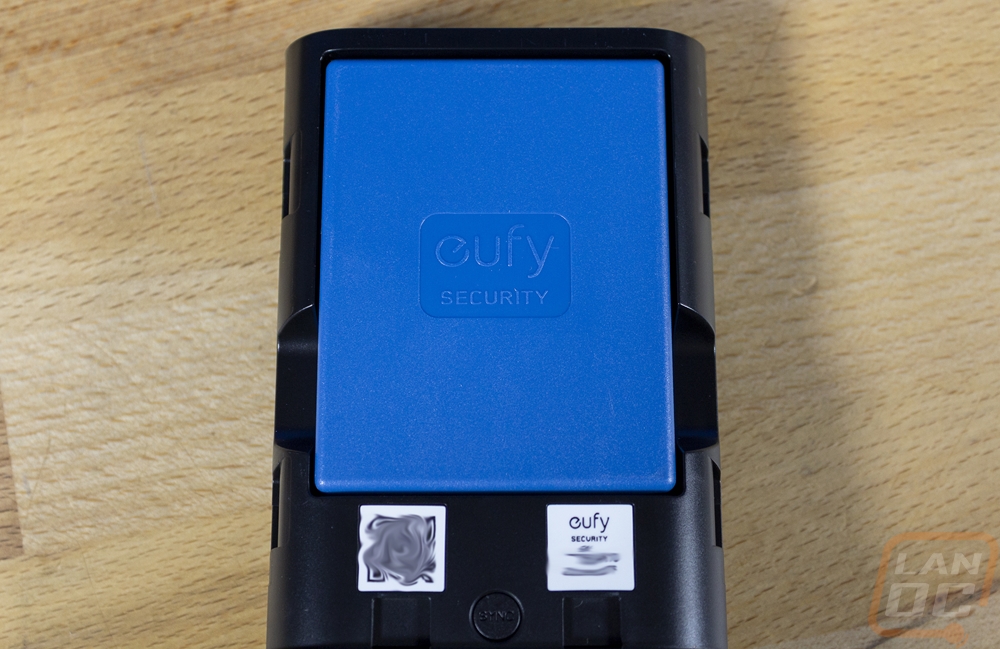 Then we have the business end of the Video Smart Lock. The center section is blacked out but at the top and bottom, I would consider it to be a dark grey more than black. Up at the top, as the name of the product would imply, it has a video camera built-in. This is the same 2K camera that eufy uses in a lot of their products which gives you a resolution of 2560 ×1920. The camera also has both a radar motion sensor and a PIR motion sensor which when combined helps eliminate false alarms. Eufy did slip their branding in up under the camera in white then we have a number pad which is a touchscreen so no buttons. You have a back button and in the bottom right corner a shield with a checkmark which is the enter key. You can use the touchpad along with codes set in the app to unlock the lock. This is good for guests or if you need someone to go into your house while you are away. Then below that, the big round button is the doorbell. This can also pull out and has rubber seals around it, this covers up the traditional key lock which is a nice backup option. 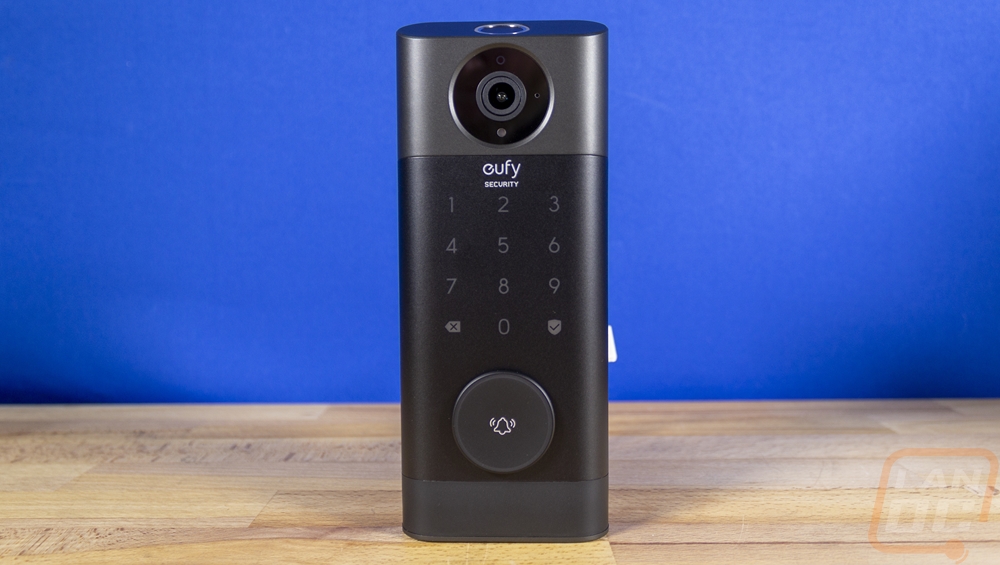 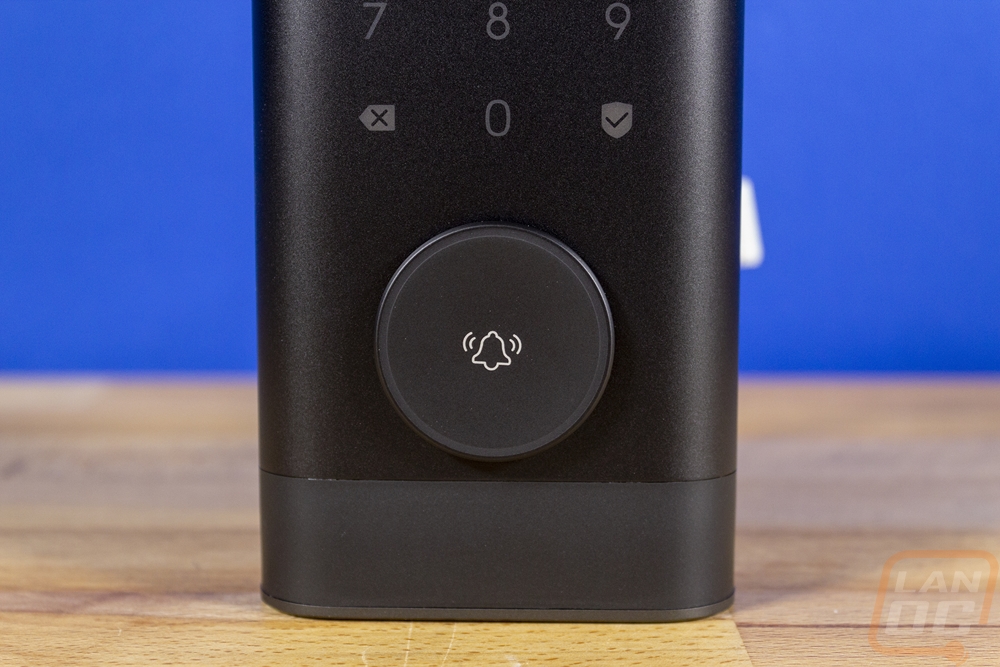 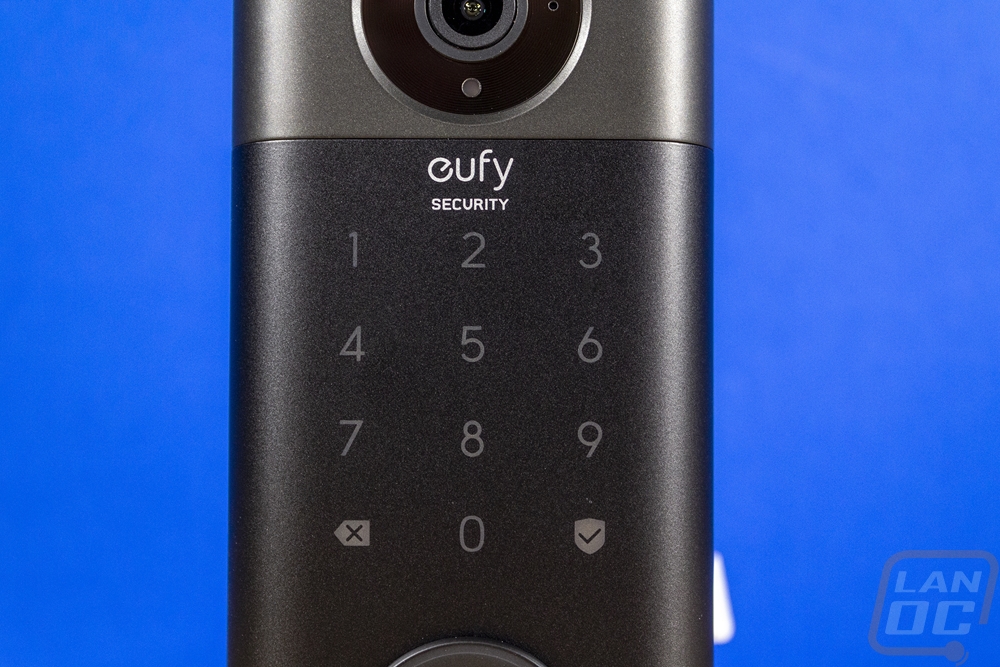 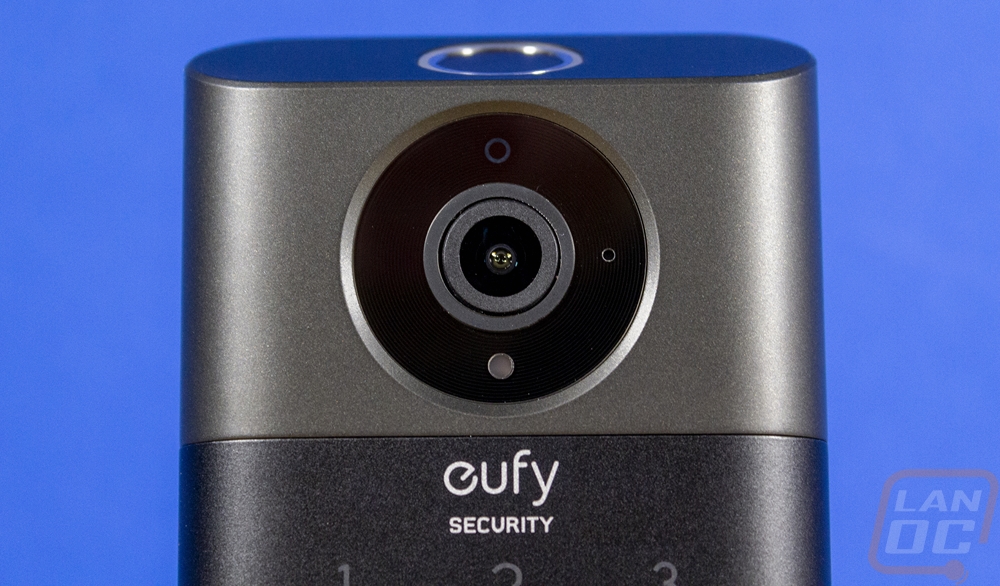 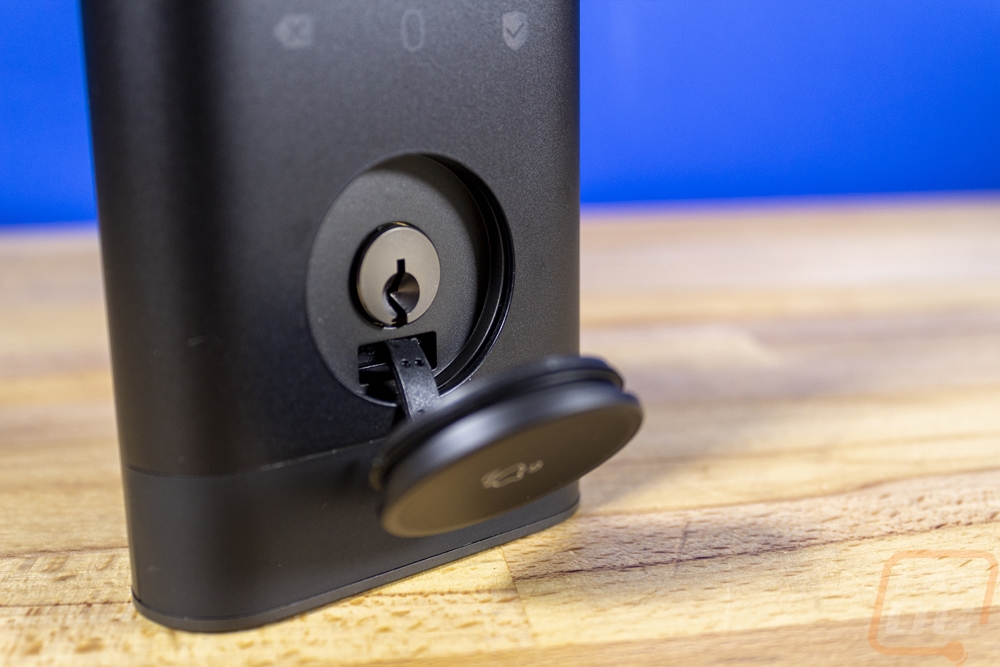 Up on the top is what I think is the most useful part of the Video Smart lock, an easy-to-access fingerprint sensor. It also has a status LED ring around it. Then down on the bottom, the lock does have small holes for the built-in speaker. There is a Type-C plug which if in an emergency you can use to plug a type-C battery pack into the lock if its battery was dead and a small button. The button is a reboot button to restart everything should something happen. The back has a rubber finish just like the back half of the lock but this half has more sticking out the back including a 16-wire connection and a wireless antenna connection. You also have the post going out of the lock cylinder to go into the back half of the lock. Eufy has also preinstalled a standard-size sleeve around all of that, this will fit a normal deadbolt opening but the lock does support other opening sizes if you remove the sleeve. 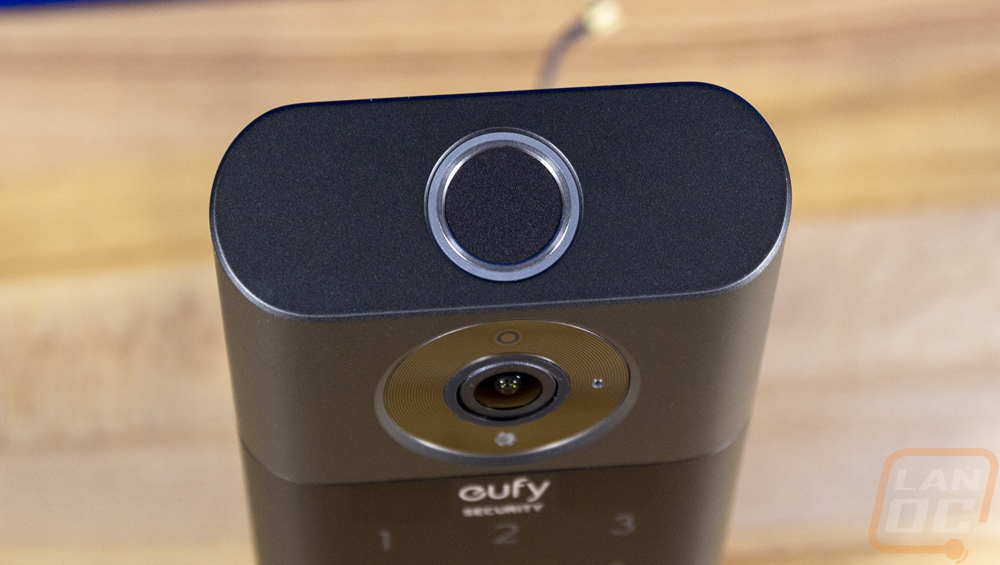 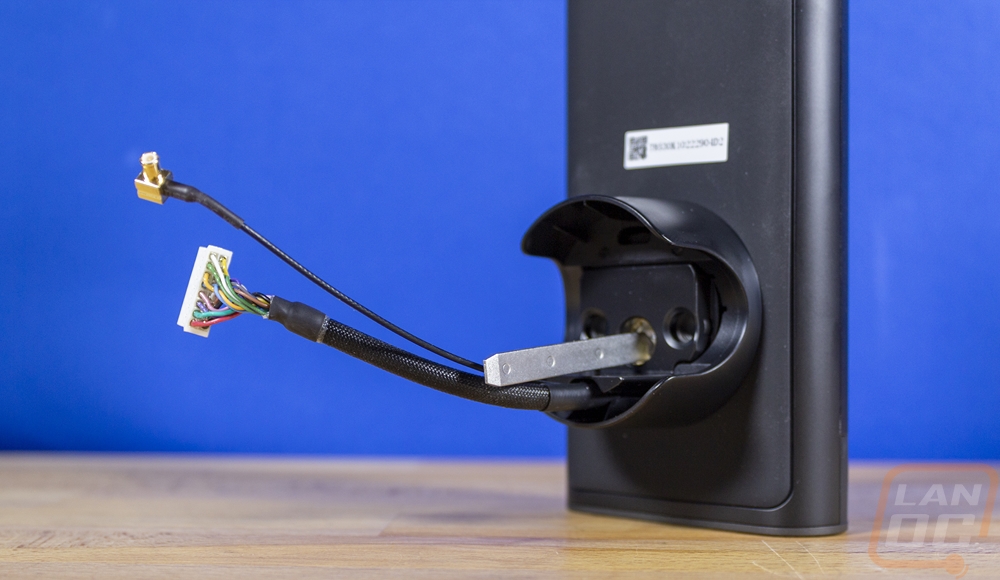 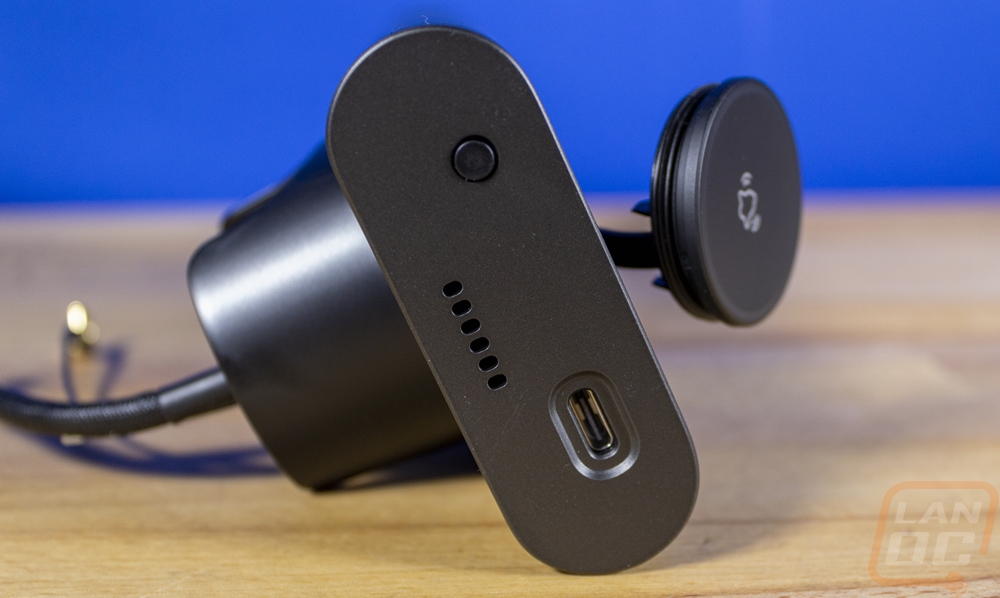 With both the front and back halves of the Video Smart Lock being large and having a good portion of their construction being made of metal the overall weight of everything together is significant. The front half was 898 grams and the back once you also include the batter was 745 for a total of 1643 grams of 3.6 pounds! That doesn’t count the mounting hardware and the latch. A normal deadbolt packaging and all is around a half pound. You are mounting the Video Smart Lock to your door and the weight won’t be an issue, but it is stout! 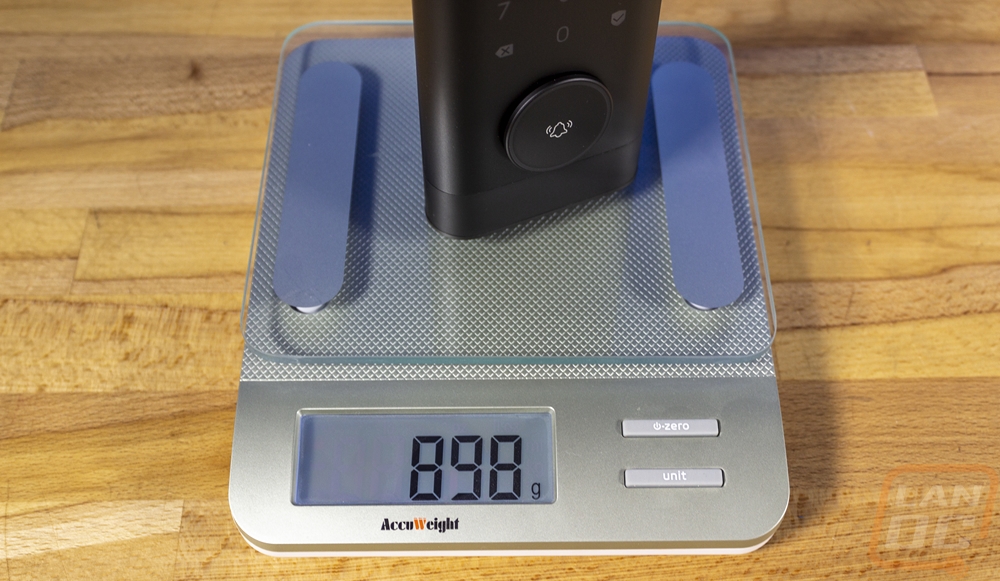 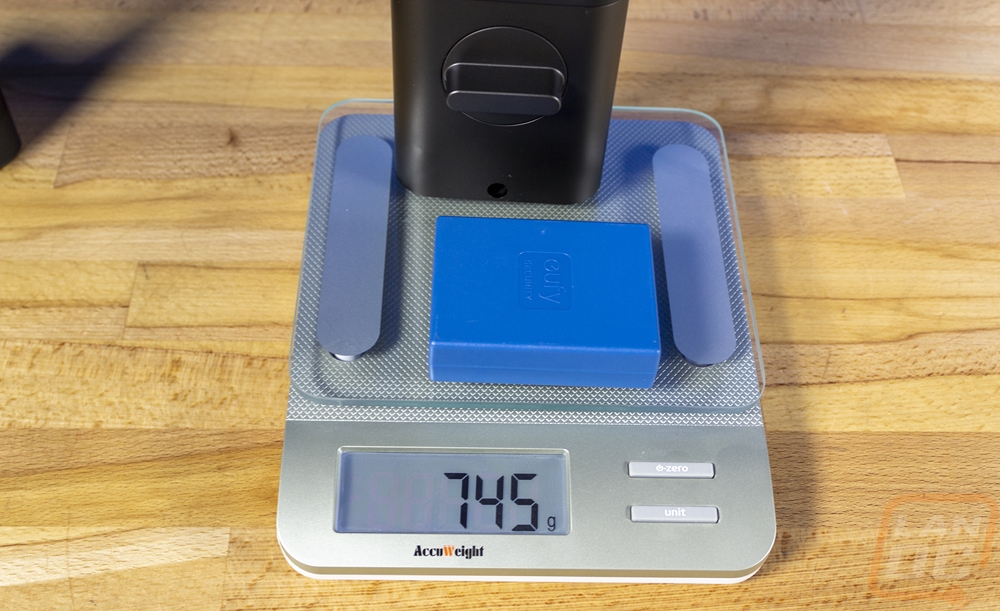 I was surprised to see that the Video Smart Lock comes with a removable battery but given my experience with the Video Doorbell Dual, it was nice to see. Our Video Doorbell Duel’s battery life hasn’t been as good as I would have liked, especially as it has gotten cold outside. It isn’t hard to charge but when you are charging it doesn’t work. For the Video Smart Lock, if you are using this lock on a door on your house you don’t even need to go outside to get it or you can buy a second one and swap them out. The battery is three inches tall and 2 inches wide. But the best part is that it has a USB Type-C connection built in for charging so you don’t need a charging dock or anything special to charge it. 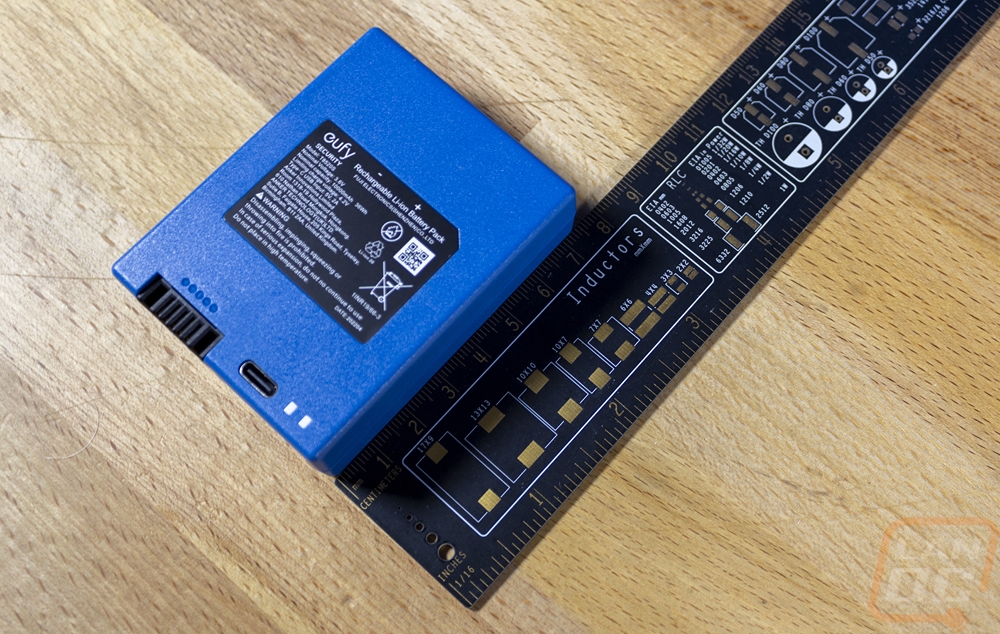 Where the eufy Security Video Doorbell Dual used their Homebase 2 for storage and its chime, for the Video Smart Lock they have gone a different direction. It comes with a plug-in chime which also doubles as its storage and also as a wireless bridge connection to the Video Smart Lock to your wireless network. As it ships the chime has two parts, the main part and you get a twist on power plug adapter which will be different depending on your location. The chime is white with a grey/white heathered fabric covering it and the eufy Security logo down at the bottom on the front. The back plugs into your wall outlet and this keeps a gap between it and the wall which the speaker which faces out the back uses to bounce the sound off of your wall. It then has two flip-up antennas which I assume one is for your wireless and the other it uses to communicate to the smart lock but I don’t know for sure without digging inside. There is a small pinhole reset button on the side and up top is the sync button to get things set up with the eufy app. On the bottom, they have all of the required information as well as a QR code you use to scan it in the app for setup. Overall the chime/bridge is 3 ¾ inches tall and it is compact enough that it can plug in and not block other plugs on a standard plug, on a power strip on the other hand it would cover up other plugs. 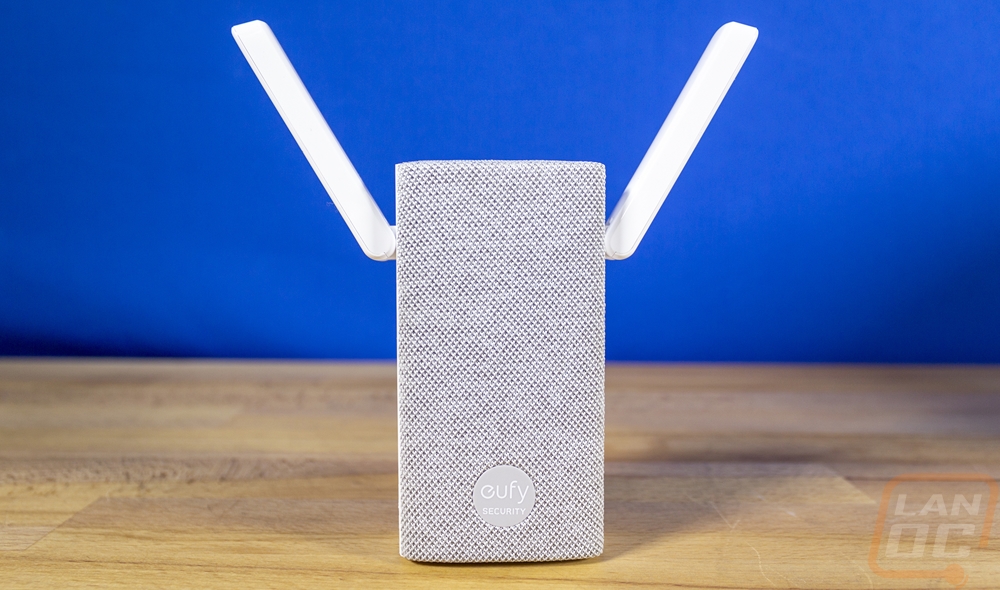 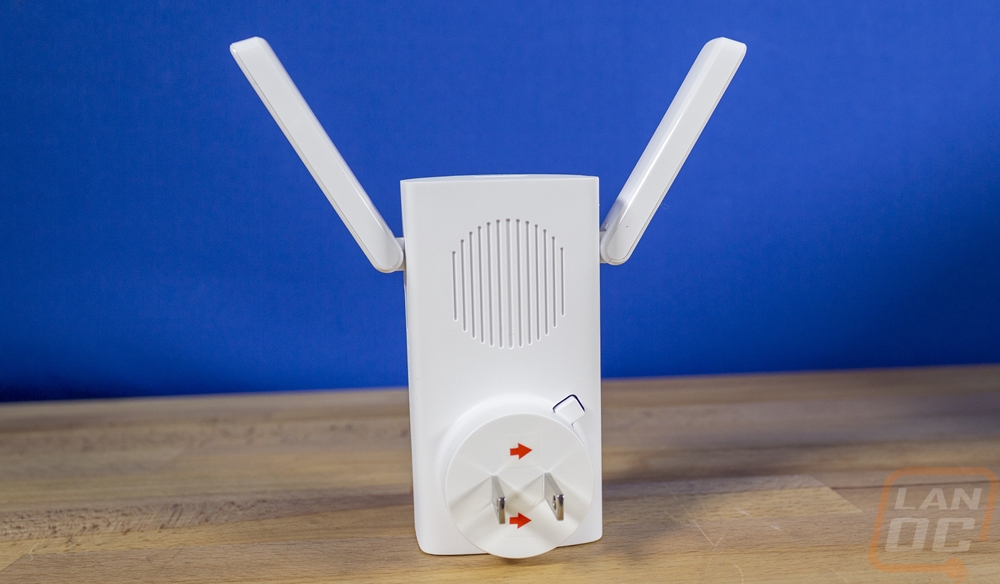 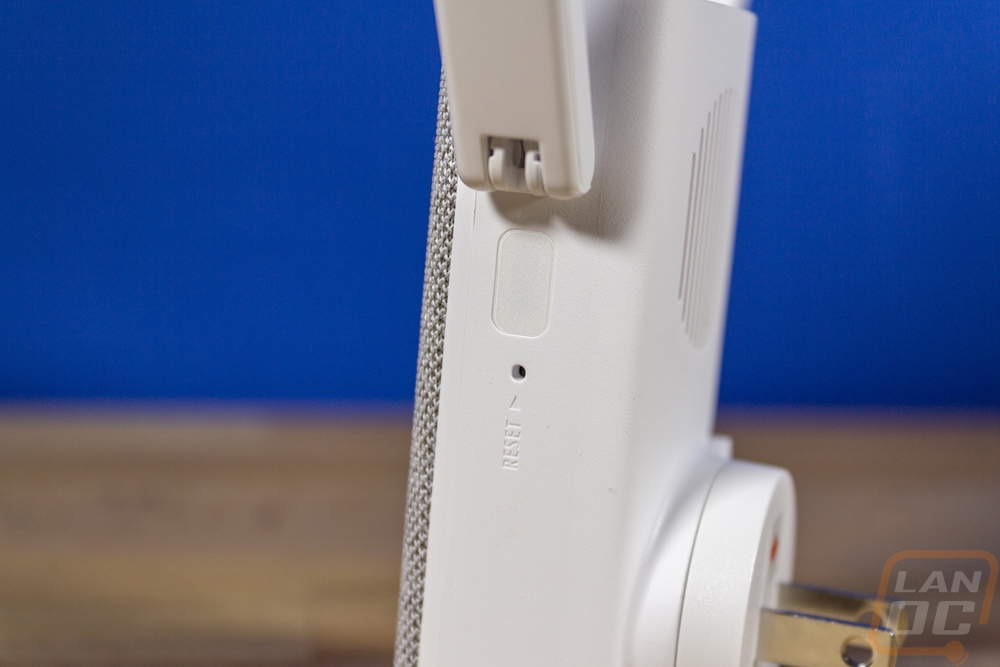 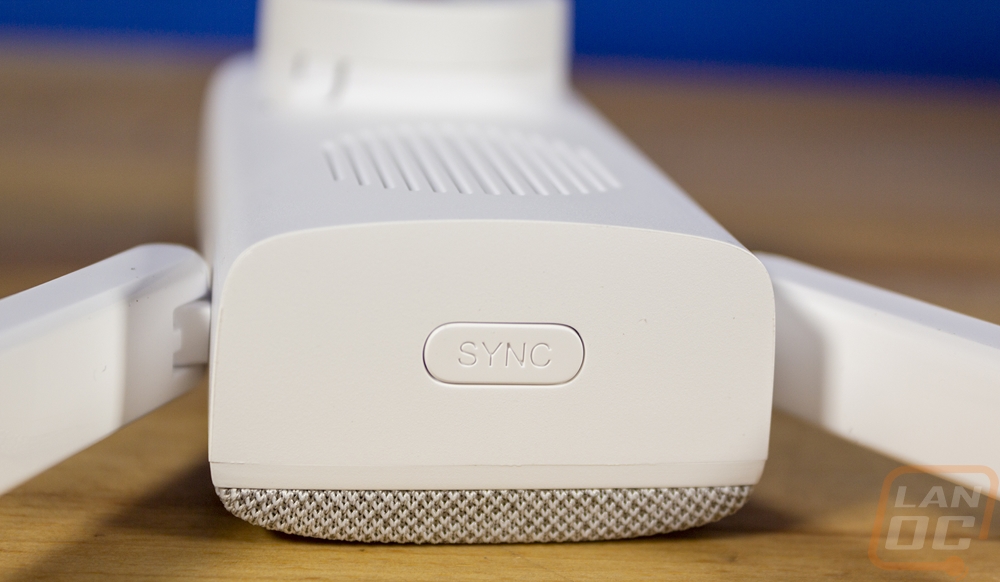 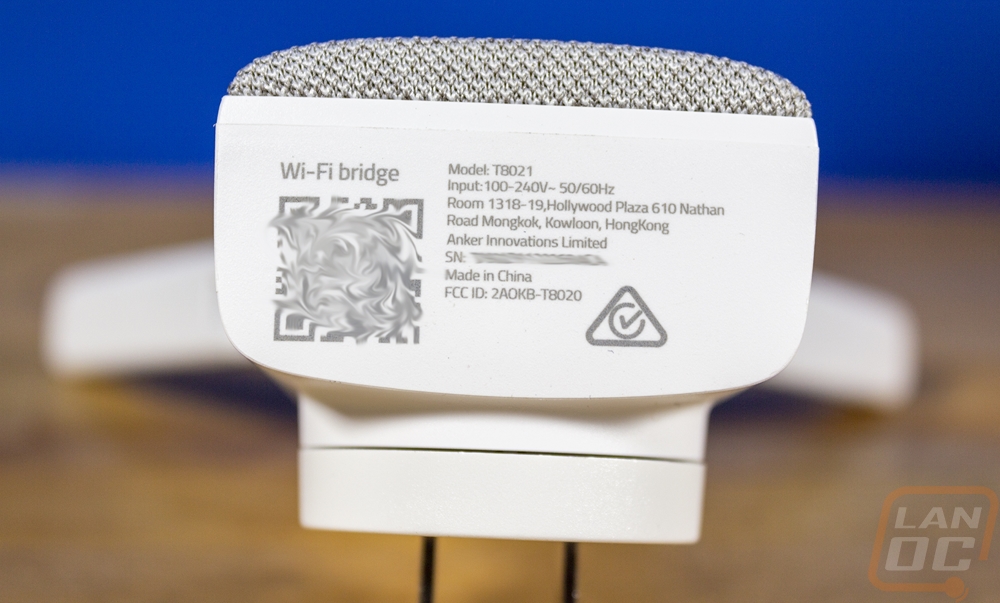 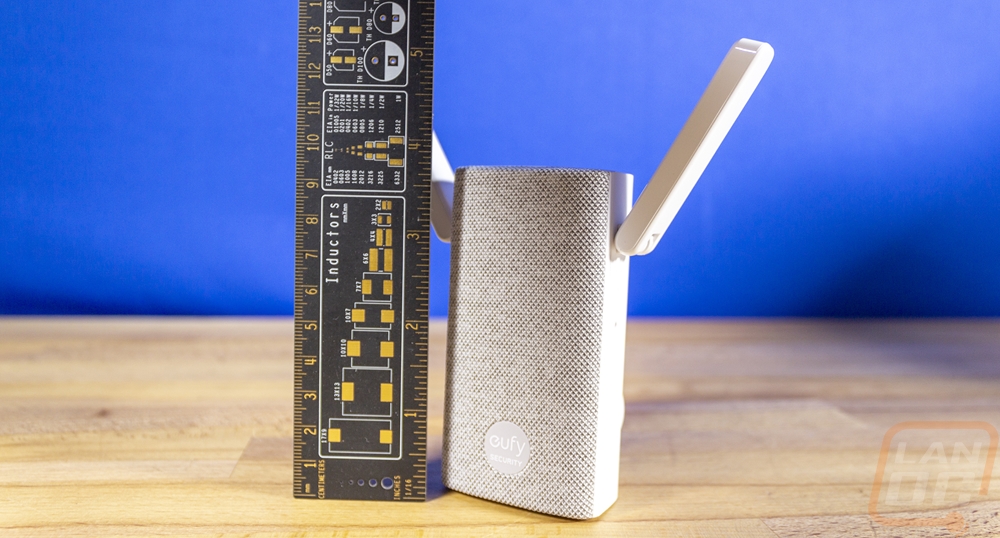 We have 1697 guests and no members online