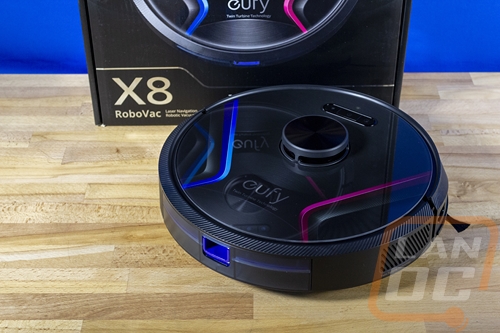 The eufy RoboVac X8 in most ways looks just like any other higher-end robot vacuum these days. The main outer design has been perfected in a lot of ways. They have the X9 decked out with a black finish and in some areas on the top, it is accented with a fake carbon fiber finish along with the glossy top which has a brushed look printed on it under the glossy top as well as the blue and pink accents. They use the same design for the X8 hybrid but with different colors to help distinguish it. The overall height of the X8 is 97.2 mm which includes the raised laser sensor in the middle on top and the overall vacuum is 345 mm round. The overall look, with the fake brushed finish and the carbon fiber weave look does give the X8 a higher-end look but being flashy like this isn’t going to blend in as much in some homes. 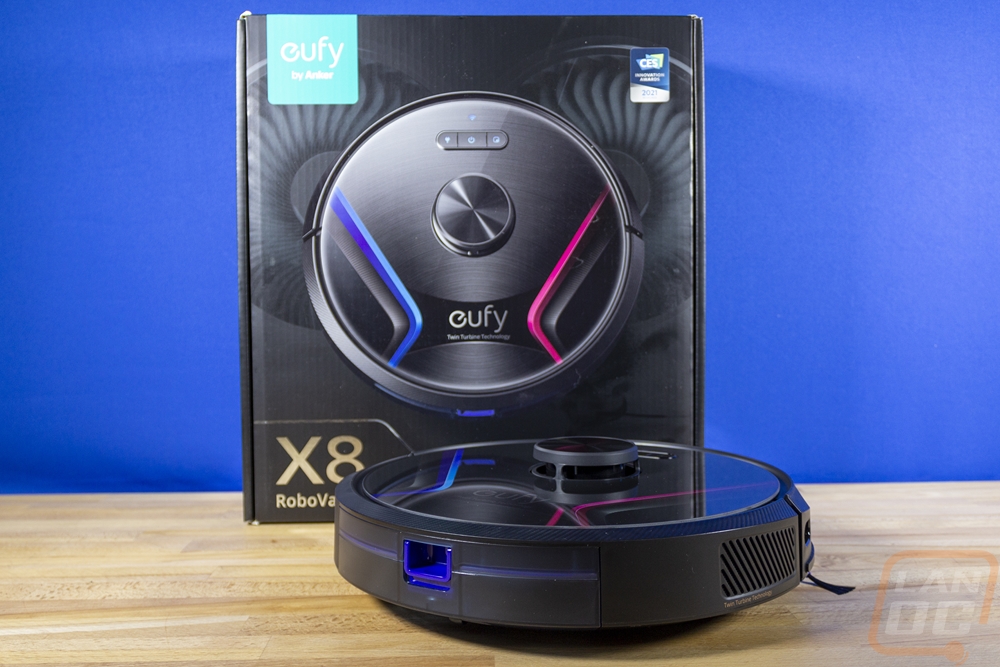 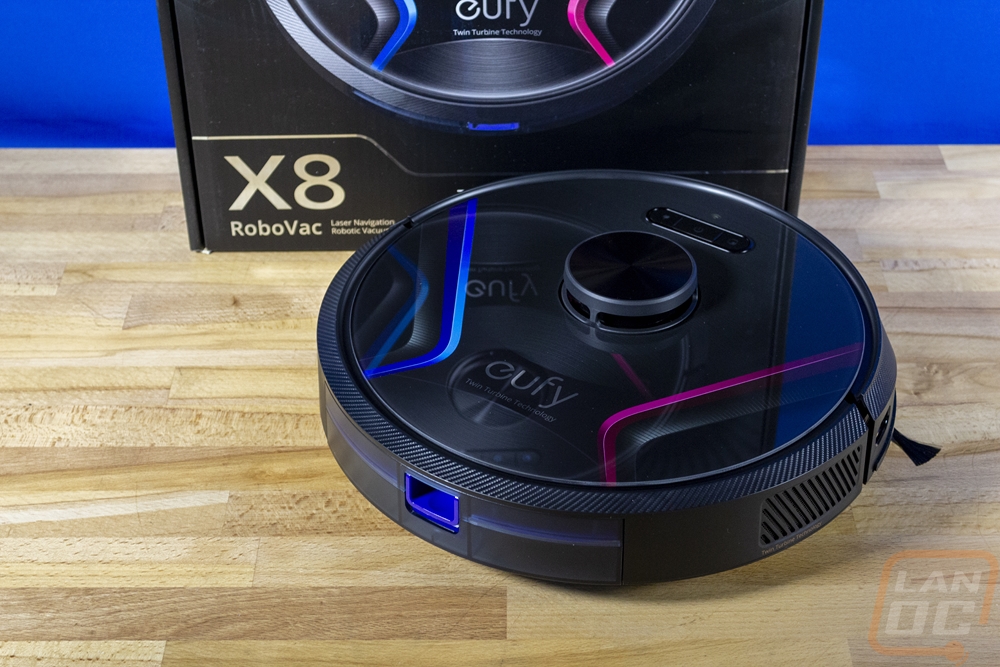 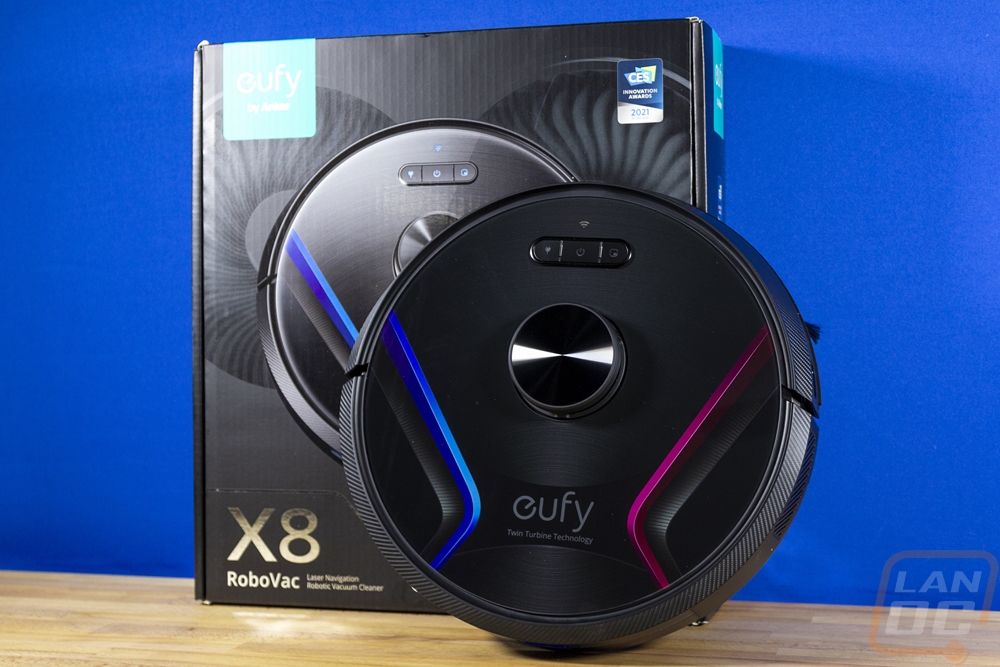 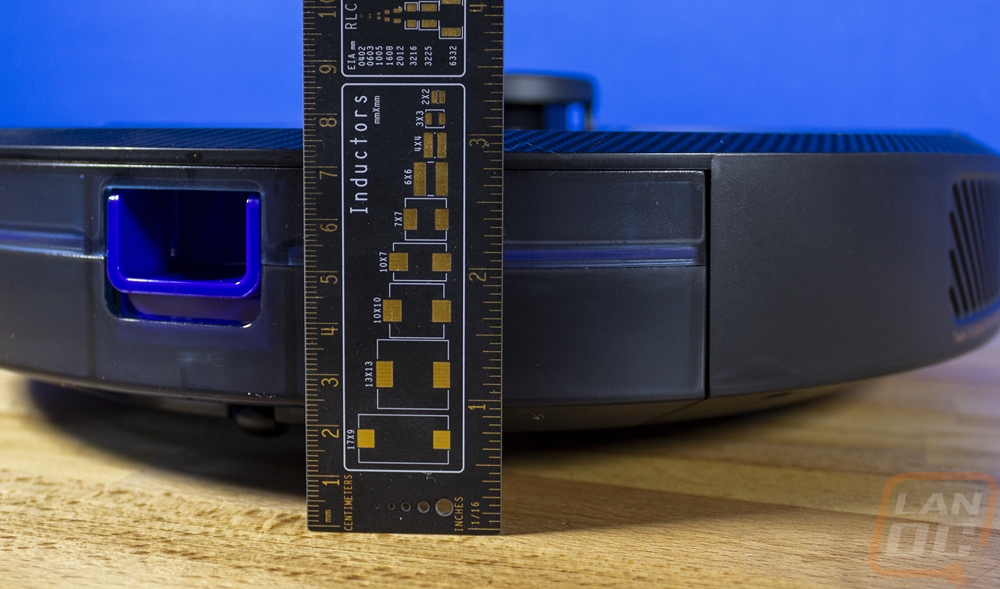 Most of the top of the eufy RoboVac X8 is that glossy top but there are a few things that are important on the top. The biggest of course is the sensor in the center that is sticking up. This is their iPath laser navigation which is their laser-based SLAM or Simultaneous localization and mapping which will map out your home as the X8 is running so it knows where to go. There are other options when it comes to robotic vacuums like Lidar or Vslam as well. They are all sensing light off of things but differ in the type of light outputted to do it. The good thing about iPath is that it can run in low light which Lidar can do as well but vSlam doesn’t. Also on the top of the X8 are three buttons which all have status LEDs in them and one LED in front of the bottoms to show the status of the wireless connection. The main button is in the center which is the power button which will get things going if you want to press it, pause when running, and start things again if you have an issue or clean it out. The plug button will send the X8 back to the charging dock to charge. The last button is the spot cleaning button which will clean just the spot where the X8 is in. 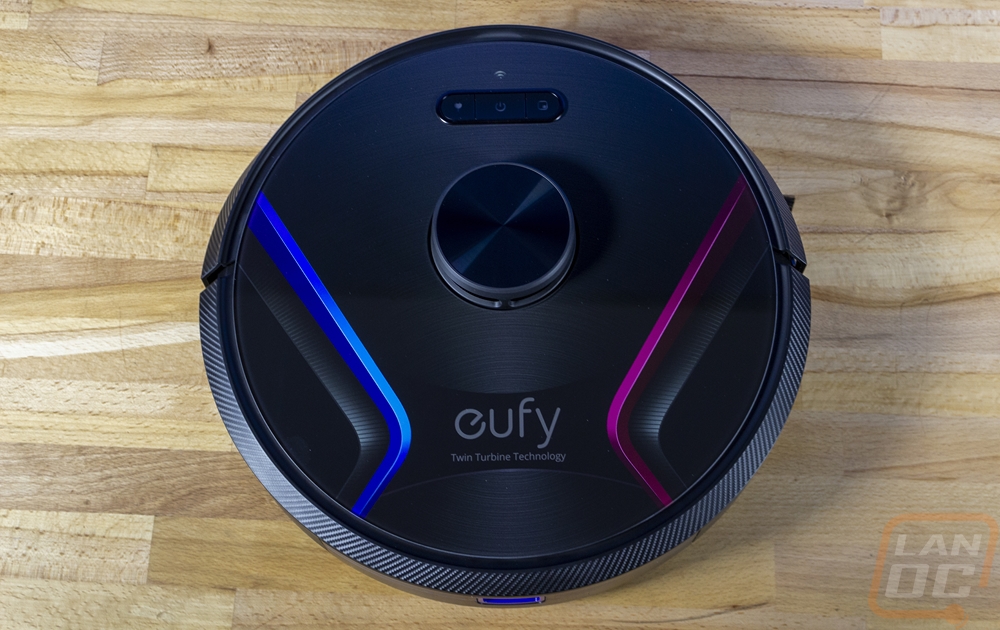 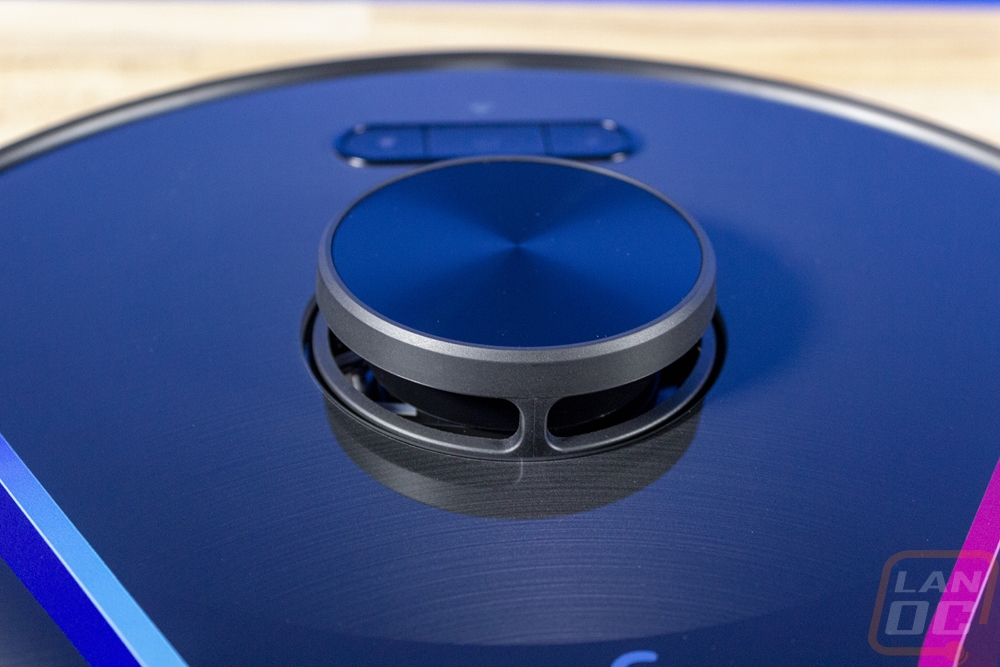 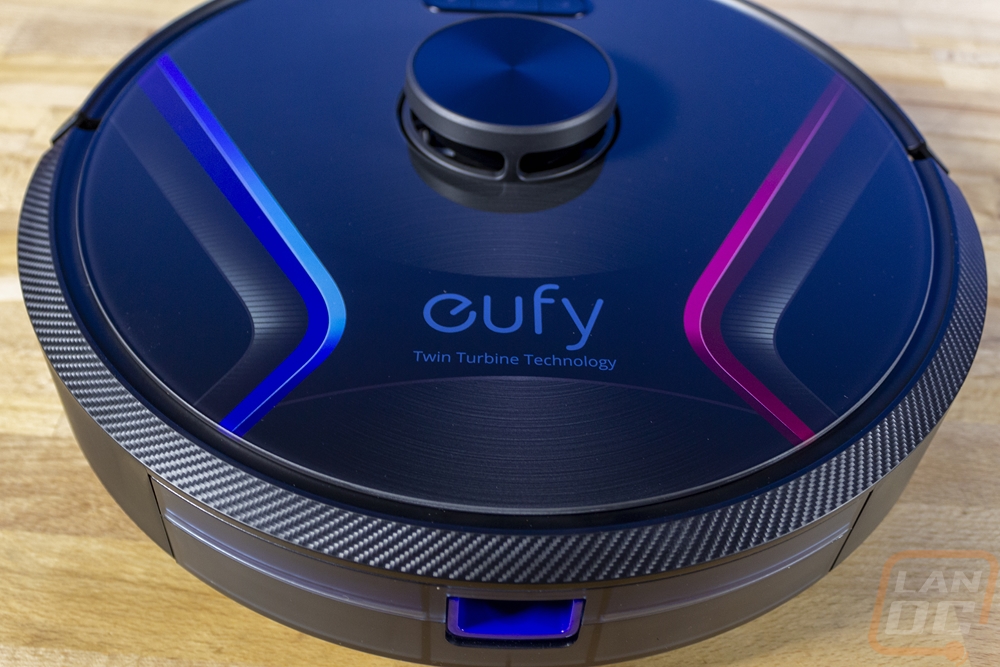 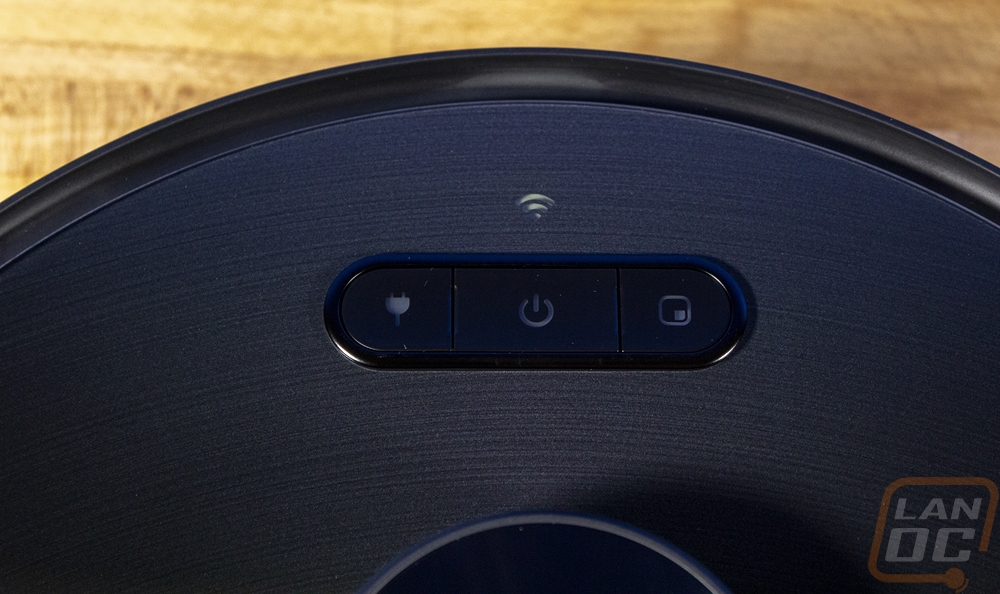 Being a circle there isn’t any one side so I wanted to look at the outside edge of the X8 altogether. At what I would call the front the entire area has a large bumper which helps it figure out if something is in the way and to work around furniture. The front of the bumper does have an infrared sensor in the middle as well to help give more information back and guide the X8 around. On the right side of the X8 near where you can see the edge sweeper, there is a wall sensor and then behind that, you have one of the two exhaust vents for the twin turbine vacuums. The twin turbines double up on the vacuum power for the X8 which gives it 2000 Pa per turbine. For reference, the roborock S7 which is more expensive but similar in features has 2500 Pa in total and even Roomba’s highest-end S9 is estimated to have around 2500 as well. The second exhaust vent is on the left side but there isn’t a sensor over on that side because the X8 only goes along walls on the one side. Then at the back, you have the removable dust container with its purple/blue latch to pull it out.

The bottom of the RoboVac X8 is where most of the action is going to be of course. At the front, you have two large contact points which are where the X8 contacts the dock for charging. In the center of those, it has a caster wheel which keeps things stabilized while the back wheels push and drive the vacuum. You can see how the front bumper has a gap between it and the housing to move when it bumps into things and at the front, there are a total of four edge sensors to help keep the X8 from dropping off of an edge and falling down stairs. You can see two right in front of the charging pads and then they have sensors around on each side of the front half of the X8. 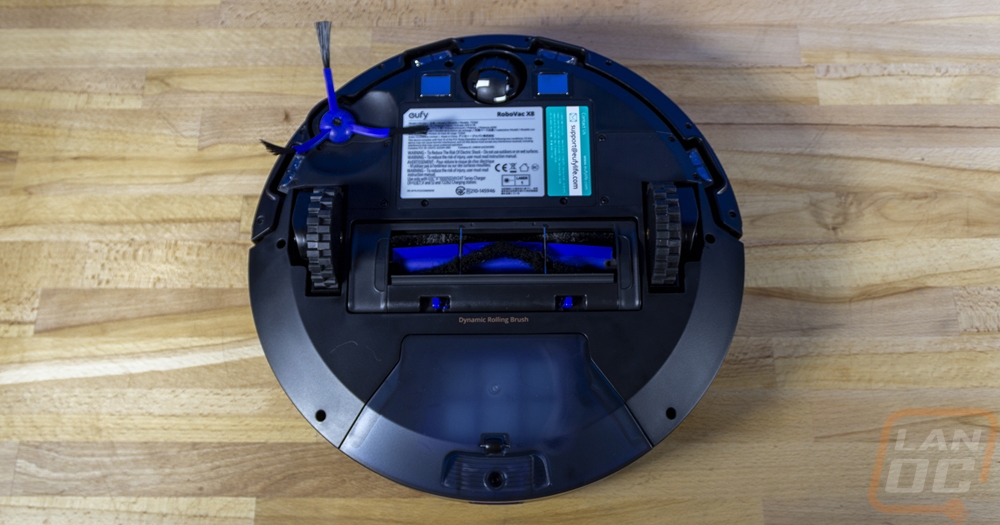 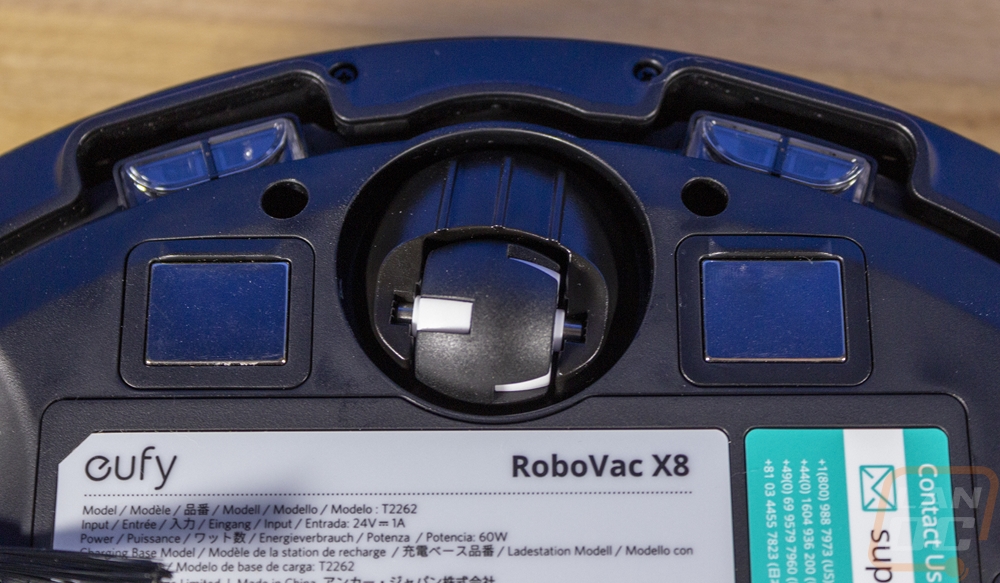 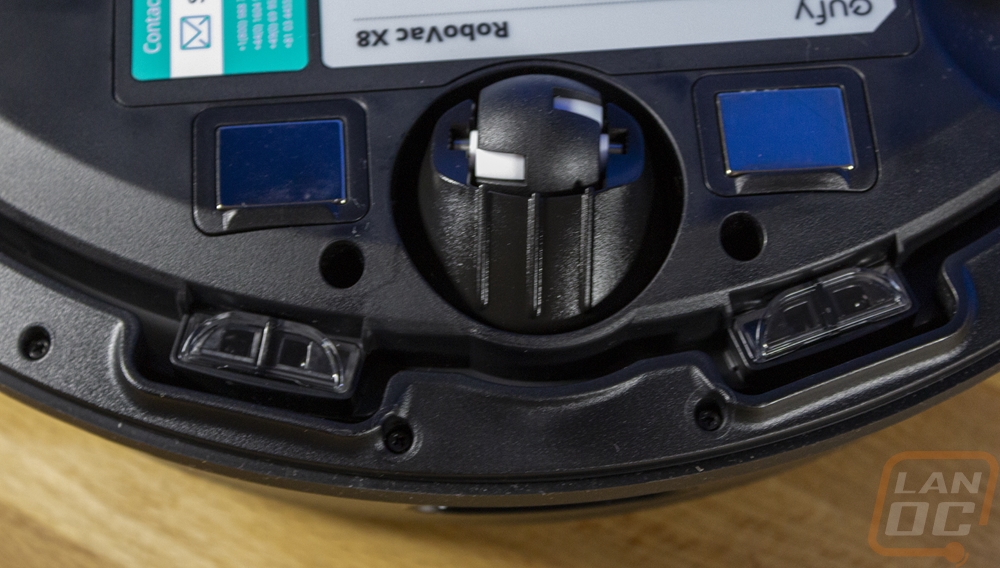 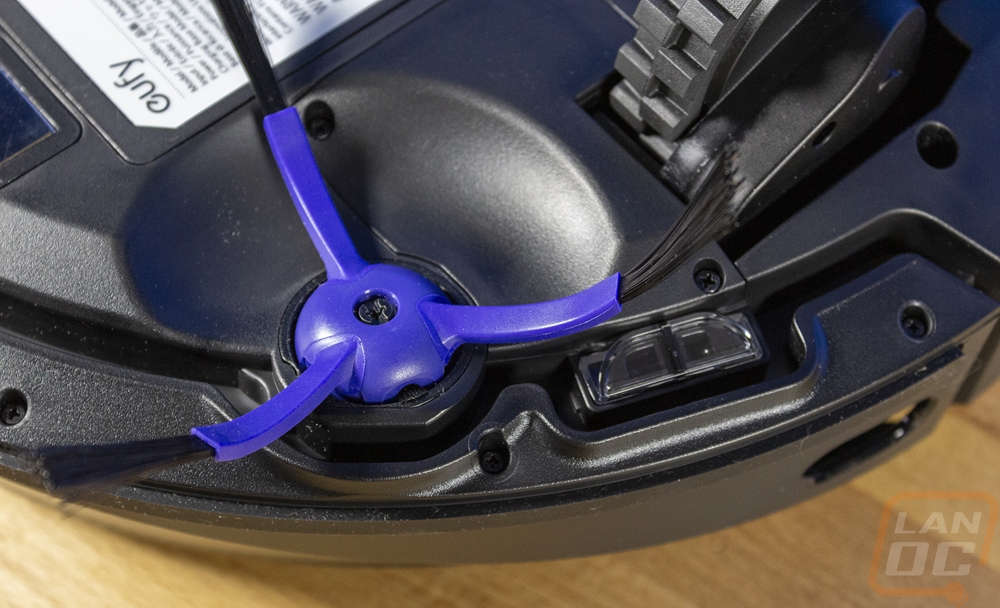 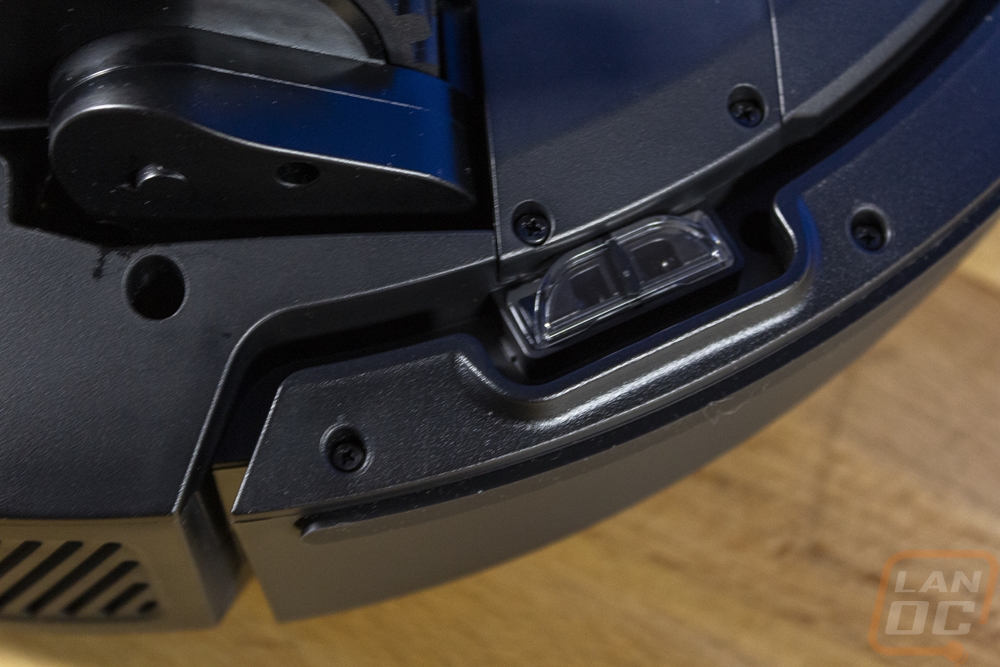 The back of the RoboVac X8 has the dust container visible so if you are wondering if it is full you can flip the X8 over and check though to be fair by that time you might as well go ahead and empty it because it isn’t much more effort. In the center, it has two stickers. One is a support sticker with the phone numbers, times, and email for all of the offices. Then next to that you have the normal manufacturing sticker which lets us know where the X8 was made, its model number, serial number, and certification logos. It also has a list of warnings here as well. Then you have the two rear wheels which combined with the caster on the front and the tiny one on the rear on the dust canister drive the X8 around. I was especially impressed with the amount of travel each wheel has which helps it get over transitions between room and materials. In total, they reach 35 mm beyond the bottom of the X8 and the tires have a heavy tread. Then behind each of the wheels, there are small panels where you can access the motors. 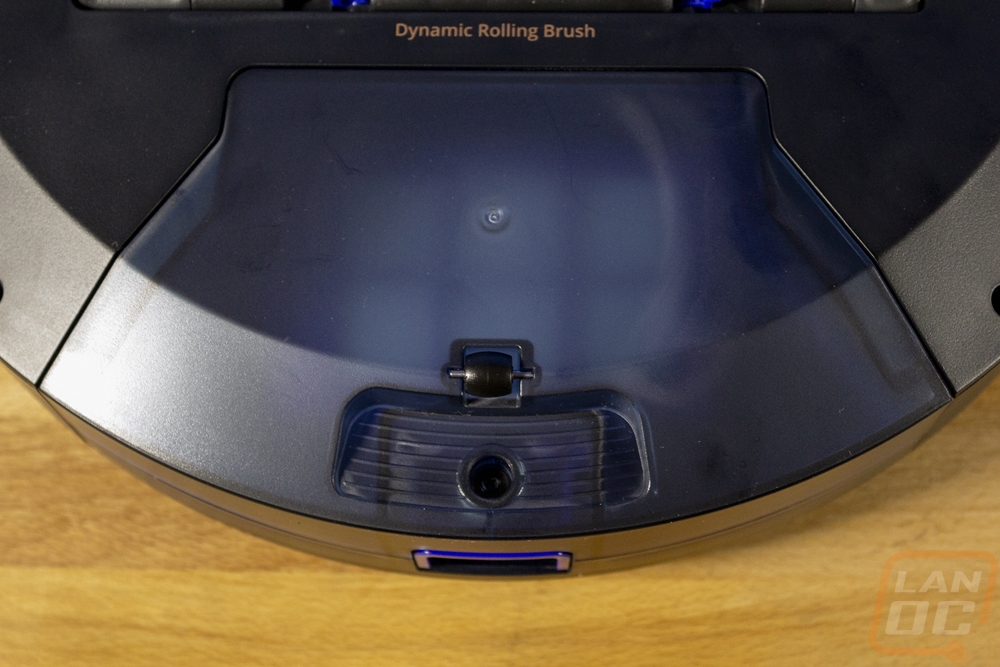 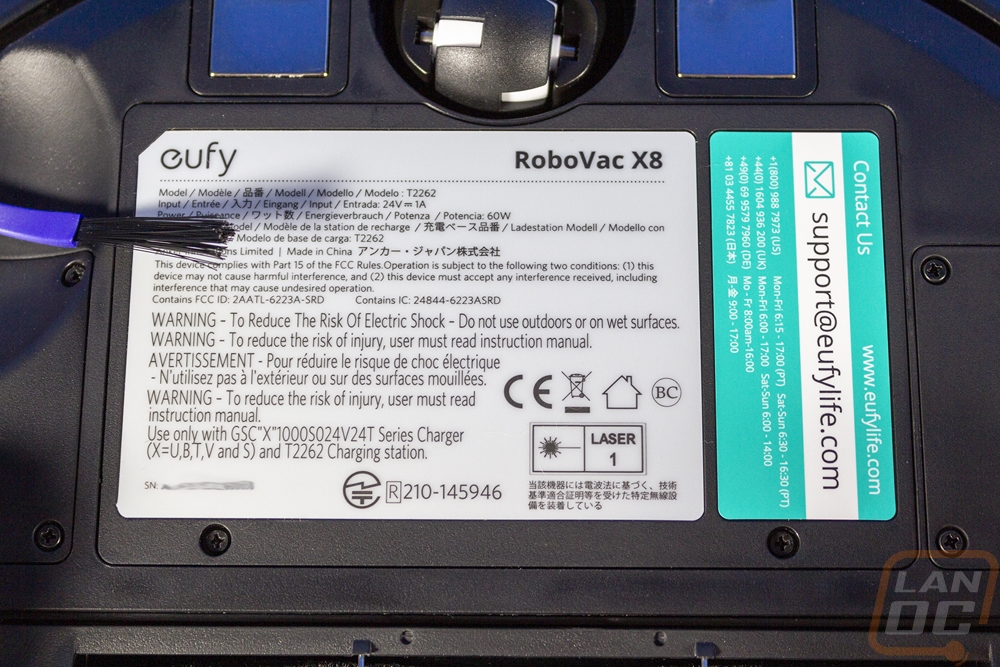 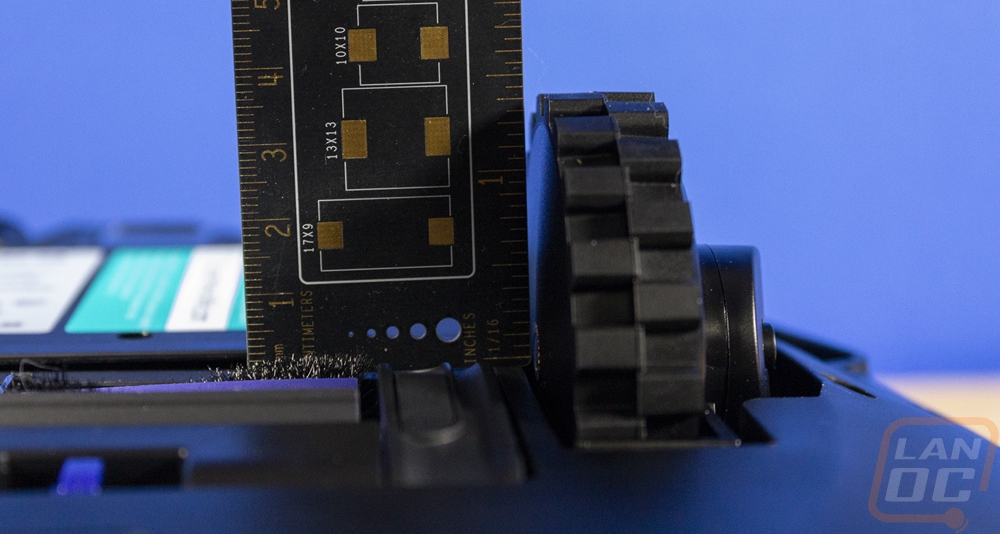 They do have the X8 setup in a way to make maintenance as easy as possible. The beater bar/brush in the center is held in with this one panel which can be popped off with the two clips pinched together. With the cover off the bar comes out and can be cleaned or replaced when needed. This also feeds directly into the dust container as well so when you are leaning things up you know for sure there aren’t any blockages in between the two. The cover does have a small rubber flap at the back which helps keep it closer to the ground and then the bar itself has a silicone base which has the brushes in a slight V shape and in between each brush it also has a half-height silicone lip as well to help push bigger stuff in. The bar slides into the motor at the one end and is sitting loose when you have the cover off so cleaning it is easy. 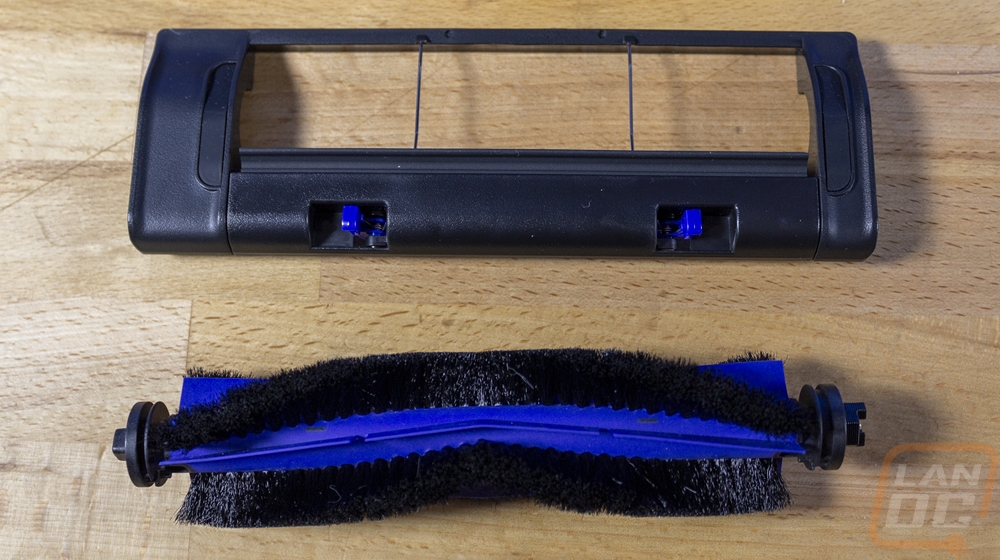 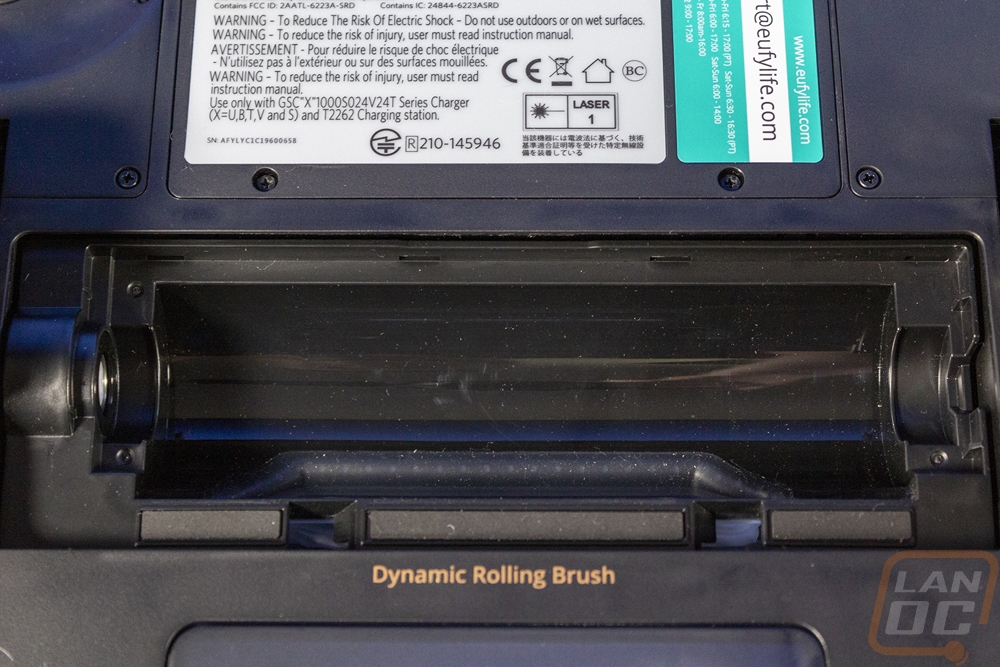 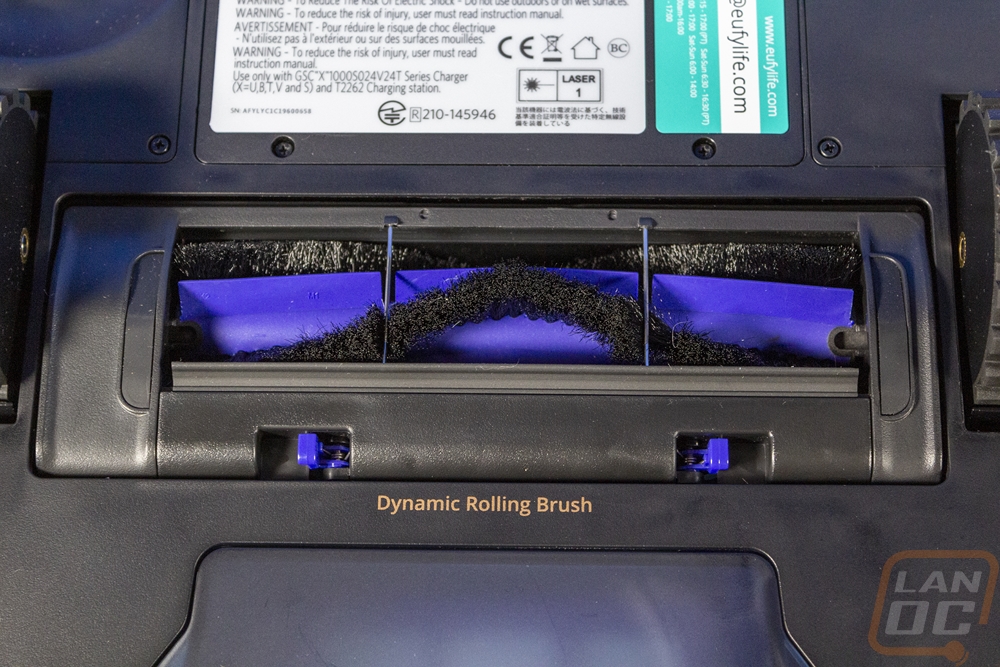 In addition to the main beater bar in the center, the X8 uses a trim brush on its right side. This brush has three small brushes and spins along the outside edge to pull things from along the wall up into the range of the beater bar and the suction. This is held in with one screw and you do get a replacement with the X8 so I would expect this to be a future wear item. 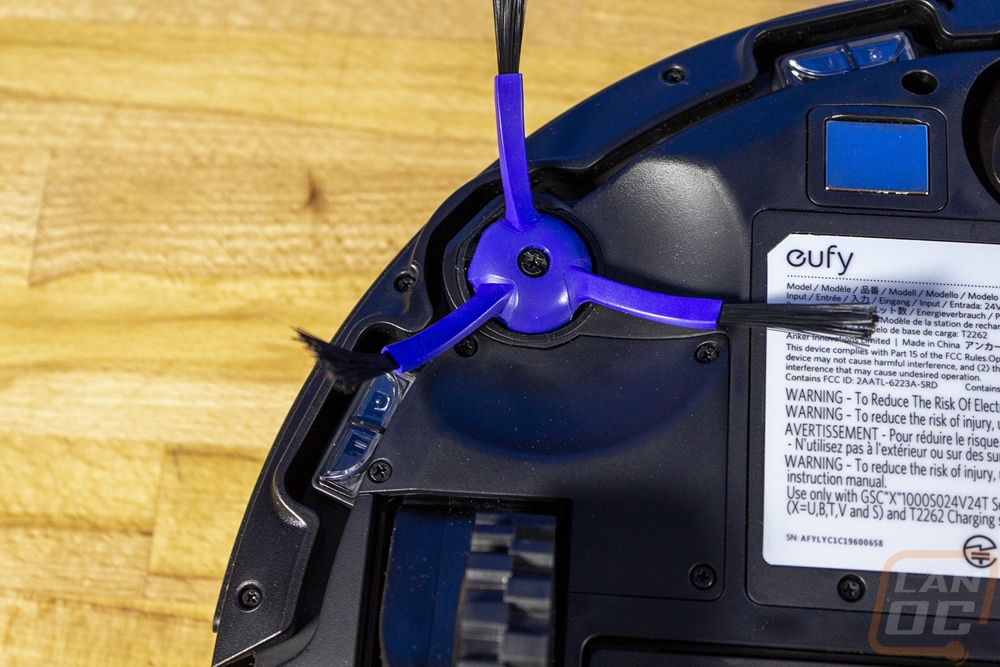 The dust collection box has the one latch on the end that when you press will let it pull out. The overall capacity of the container is 600 ml which is a lot larger than the X8 Hybrid but the same size as most of eufy’s other RoboVac options. They list the X8 as having what they call ultrapack dust compression which is also printed right on the canister. The dual turbine vacuums have more vacuum power which can pack more into the container. The canister comes with a small tool attached which has a blade used for cutting hair and string off of the beater brush and a small broom to clean up loose dust and dirt when you are cleaning the X8 up. Inside of the canister is the filter which looks like a miniature version of a car air filter, it has a clip on one end and pops out easily to be cleaned or replaced. The X8 does come with an extra filter and they sell more as needed. 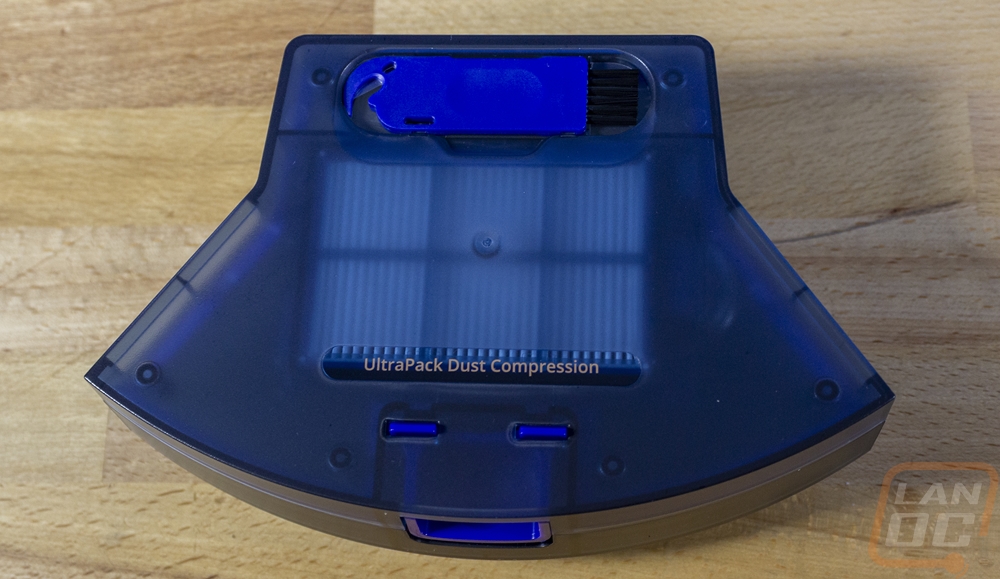 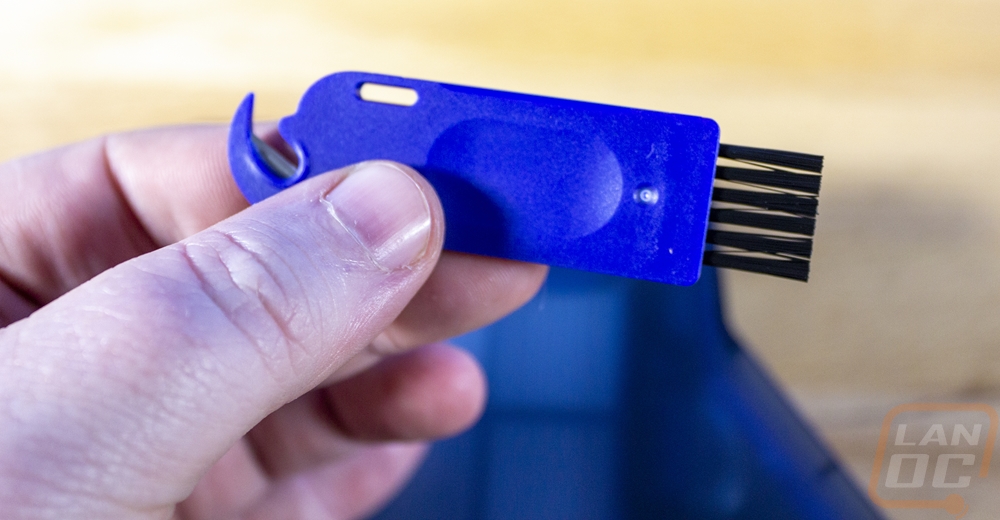 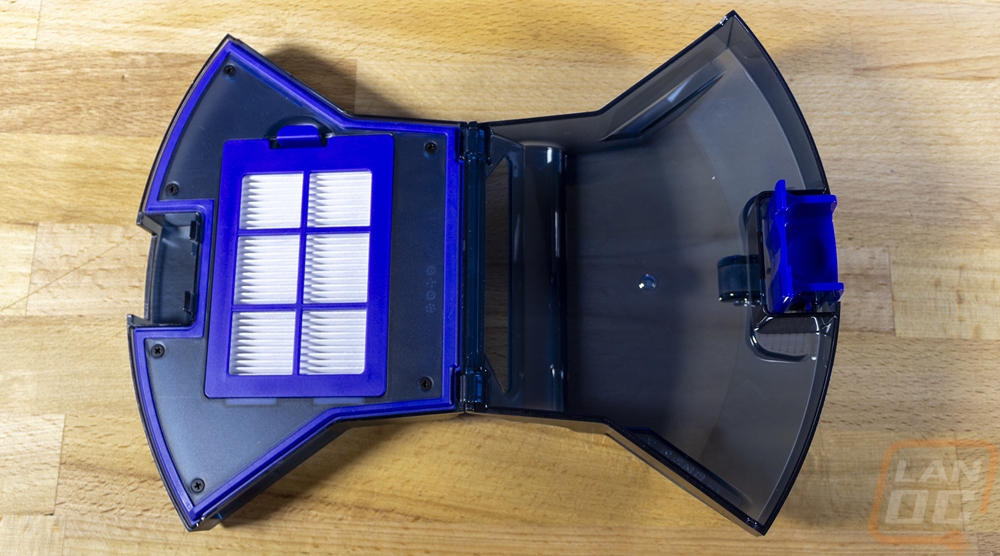 So the RoboVac X8 can only do so much without any way to be charged back up and to do that eufy provides it with its charging base which it stays on in between uses to slowly charge the battery. The base has an oval main chape with a tinted top half that hides the sensors needed for the X8 to be able to see it as the charging base. It then has a section that sticks out with the two spring-loaded contact pads for charging. On the bottom, it has three rubber feet which have a grooved texture to them for grip even with dust and dirt. There are two feet under the contact surface section and one larger pad under the main section of the base. They also have stickers on the bottom to let you know how to set up the base and with warnings that you should have 3 feet on each side and 6 feet in front of the base so the X8 can see the base and return to it. The section with the main larger rubber pad and the sticker on it is removable. This hides an area where you can wrap up all of your extra power cord and this is also where the power cord plugs in. You need to tidy up this wire to make sure the X8 doesn’t suck it up and cause problems. 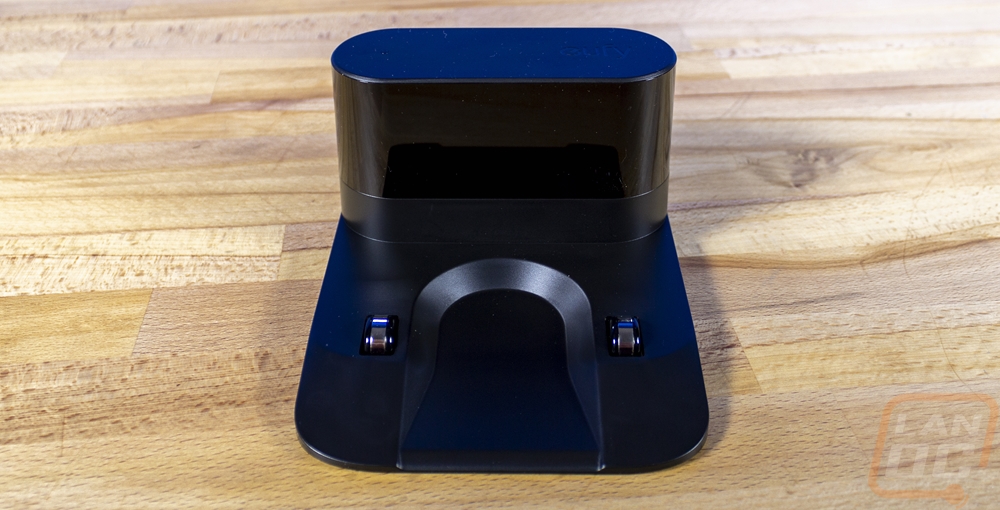 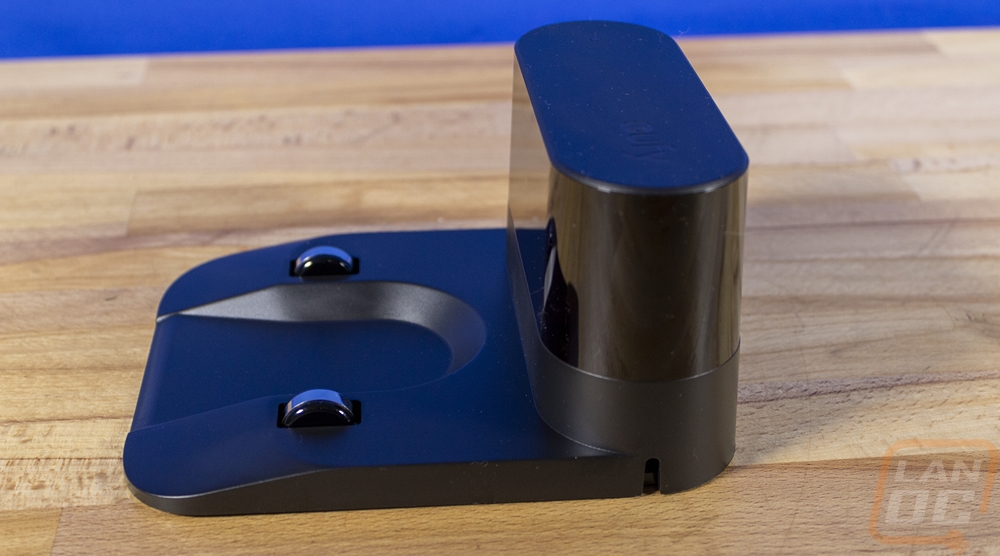 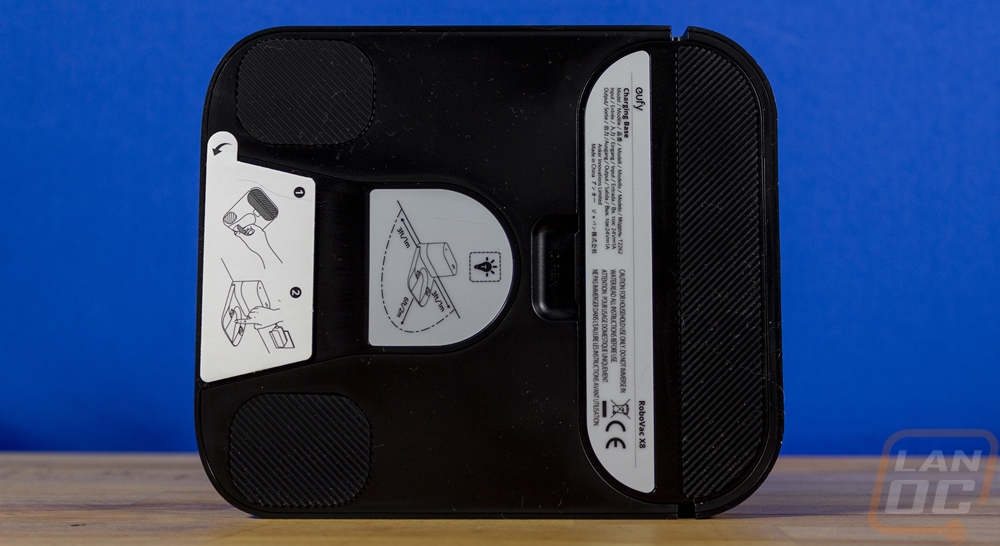 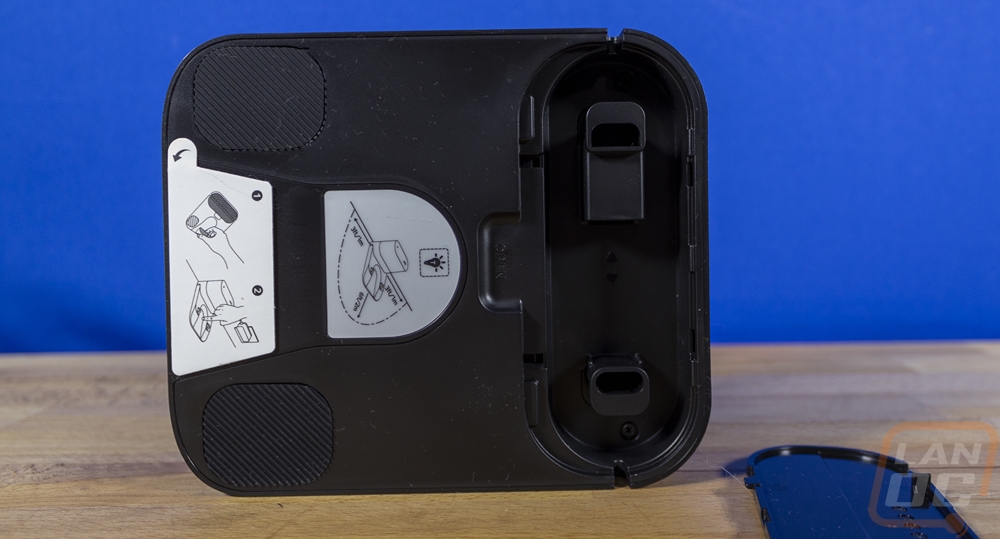 We have 1836 guests and one member online