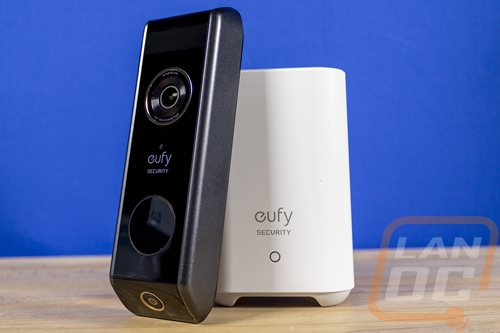 There is always some room for improvement and for the Video Doorbell Dual there were a few small things that I would love to see. Because it is battery powered you will need to charge it every 3-6 months. I wouldn’t mind seeing that charging port be a Type-C in the future simply because most people at this point will have Type-C chargers readily available. Eufy does provide a Micro-USB cable for charging, but months from now I know I’m going to have to dig around to find it. I would also love to see the chime options with the homebase 2 be expanded, we weren’t a fan of any of the options but more options could help with that and offer more to change between. They do have one Christmas chime, but other holiday chimes to go with that could be nice as well. Being able to upload your own would be the best option. I may be part of just a small group that is looking for this, but I would love to see ONVIF support for the cameras that would allow the camera feeds to be tied into other IP camera security systems so you can have everything all together. Eufy does include RTSP support with some of their wired cameras so there is the possibility and I completely get that being battery powered a constant feed would use the battery up quickly but for those who end up hooking the Video Doorbell Dual into their doorbell wiring for charging or for the wired model would be nice. I can’t forget to mention as well the overall size of the Video Doorbell Dual which just barely fits on our doorbell mounting pad and is larger than even the battery-powered Nest, but eufy did pack in two cameras and mode features. I would also love to see replaceable covers or color options to give you a way to match the Video Doorbell Dual with your house. 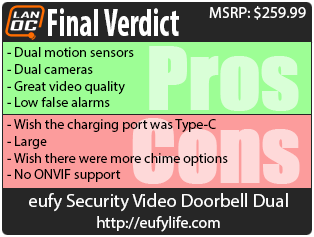 You might call him obsessed or just a hardcore geek. Wes's obsession with gaming hardware and gadgets isn't anything new, he could be found taking things apart even as a child. When not poking around in PC's he can be found playing League of Legends, Awesomenauts, or Civilization 5 or watching a wide variety of TV shows and Movies. A car guy at heart, the same things that draw him into tweaking cars apply when building good looking fast computers. If you are interested in writing for Wes here at LanOC you can reach out to him directly using our contact form.
Discuss this article
Log in to comment
Posts in discussion: eufy Security Video Doorbell Dual

We have 1519 guests and one member online