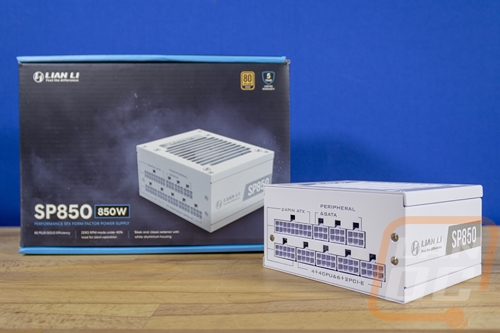 Like I mentioned at the start of our look at the Lian Li SP850, this isn’t testing the power that it is producing, I would still recommend checking out a review that has that. Today we are just checking out some of the features of the SP850 and Lian Li did a good job of making their new 850-watt SPX power supply stand out. The SP850 is available in black and white but I don’t think it is possible for the black model to look as good as this bright white is looking. Lian Li paired the white aluminum housing up with silver/grey for labels and the logo on the side which goes well with the white. All of the cables are bright white including the plastic connections, and even the power plugs in the PSU itself for the modular cables. Add to that the individually sleeved cables for the traditional PCIe cables, 24-pin, and both of the CPU power and you have a good looking PSU without the need to add in cable extensions or custom cables. Most of the cables are shorter which goes well with the SFX size though the two CPU power cables may have a little too much length on them for smaller cases. Lian Li has also included a new PCIe 5 power cable which has the small compact 12-pin plug on the video card end to provide up to 400 watts without having to run three different power cables to one video card which should clean things up.

It has a zero RPM fan for anything less than 340 watts which should keep the noise down unless you are in game or putting your GPU under a lot of load. The SP850 also has its 80 Plus Gold rating which if this was an ATX power supply would be a little on the low side these days. But considering it is a true SFX and 850 watts it is exactly what you need. There aren’t many 850-watt SFX options out there, off the top of my head I can only think of the Cooler Master and EVGA models, everyone else has their high-wattage SFX PSUs running the longer SFX-L form factor to help make that power. Lian Li has a compact SFX option now at 850 watts and frankly, I don’t think anyone else is looking this good while doing it. As far as pricing goes, it has an MSRP of $149.99. The comparable EVGA is cheaper at $112.99 and the Cooler Master V850 SFX is closer at $140 so Lian Li is higher priced, but right now if you want high wattage SFX this is the only option that will get you the new PCIe cable included with the power supply.

You might call him obsessed or just a hardcore geek. Wes's obsession with gaming hardware and gadgets isn't anything new, he could be found taking things apart even as a child. When not poking around in PC's he can be found playing League of Legends, Awesomenauts, or Civilization 5 or watching a wide variety of TV shows and Movies. A car guy at heart, the same things that draw him into tweaking cars apply when building good looking fast computers. If you are interested in writing for Wes here at LanOC you can reach out to him directly using our contact form.
Discuss this article
Log in to comment
Posts in discussion: Lian Li SP850 SFX PSU