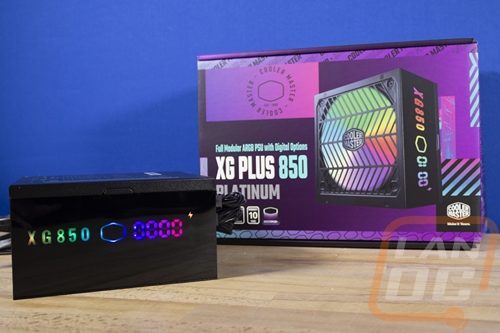 On the packaging and even in the information that Cooler Master sent over about the XG850 Plus Platinum ARGB one of their biggest focuses is on it being their first in-house design but what also goes unmentioned is that this is also their first PSU with RGB integrated into it. While I could talk a lot about whether RGB is needed at all in a power supply, it is surprising that Cooler Master is only now getting into the game when so many other options have been out there. Cooler Master was quick to get into the RGB market on the peripheral side of things as well as with cases, fans, and AIO coolers. Thankfully though the XG850 Plus Platinum ARGB isn’t just a fan inside with lighting though it does also have that. Cooler Master has integrated the addressable RGB lighting into the side of the PSU which is the one area that I personally think can be helpful and much like Asus with their Thor PSU they have also integrated a display as well.

So the ‘Main’ side of the XG850 Plus Platinum ARGB has a tinted acrylic panel which when not powered up doesn’t show anything. When it is on they have the XG850 model name lit up and next to that the outline logo. I love that they did the model, not just a generic name that would apply to all of the wattages. Then to the right of that, the display also integrates the addressable RGB lighting into the four 7-panel LED panels which can display number readouts. They then on the right of that have three icons to show you what the readout is showing. The display can show your current wattage, fan RPM, and PSU temperature which are all useful and this is a little more than the Thor display shows. 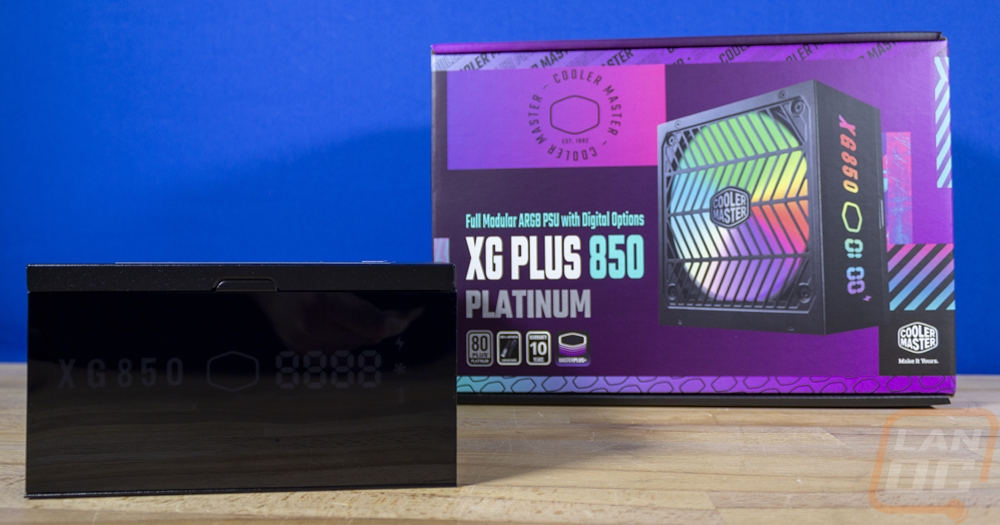 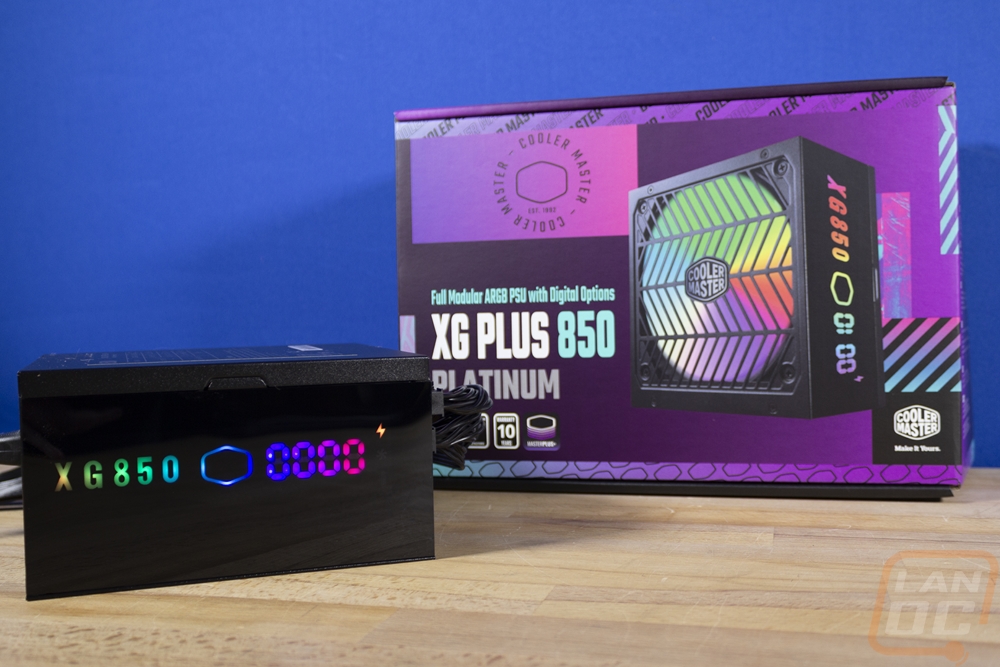 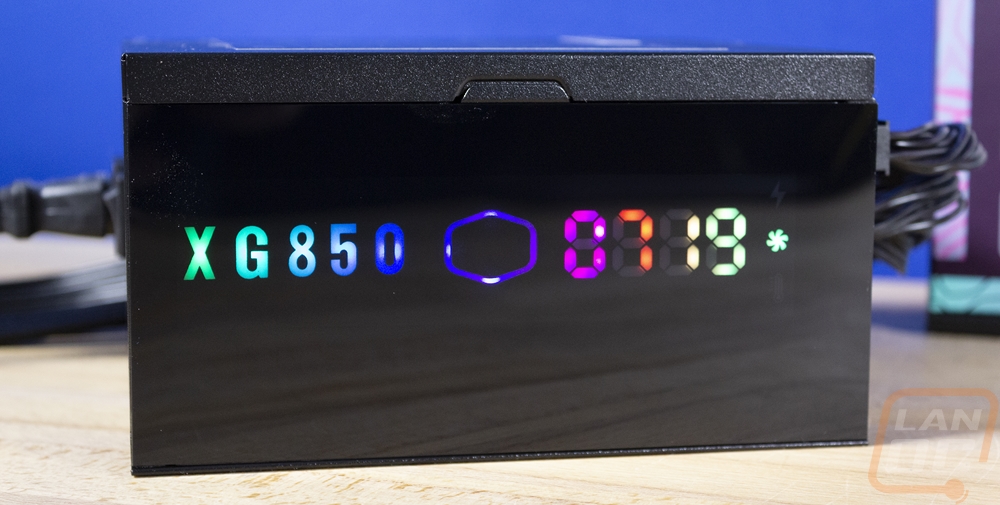 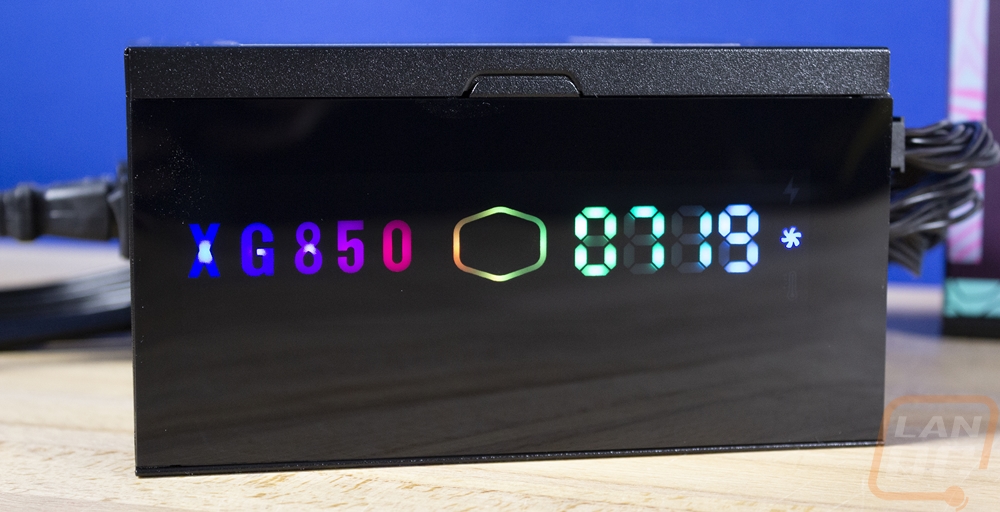 For the opposite side of the XG850 Plus, Platinum ARGB Cooler Master has everything flipped upside down because if this side is showing you most likely have had to flip the fan facing up. Of course, at that point, the fancy lighting and display on the side are hidden so the chances of you doing this are slim. Even so this side the housing has an angled strip shape stamped into it with the XG850 branding and the outlined Cooler Master logo. Here we can also see the finish that they went with on the XG850 Plus Platinum ARGB which is a glossy black finish that still has a texture as well. 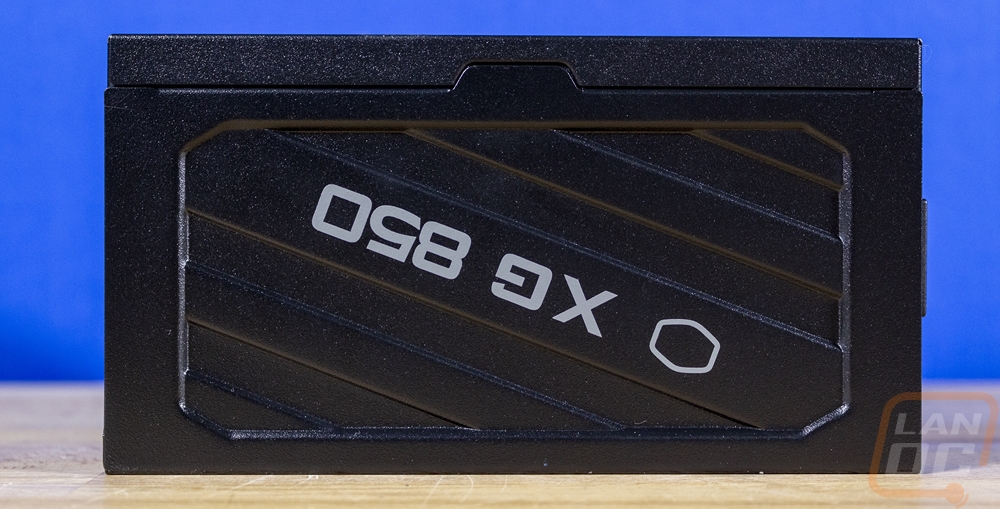 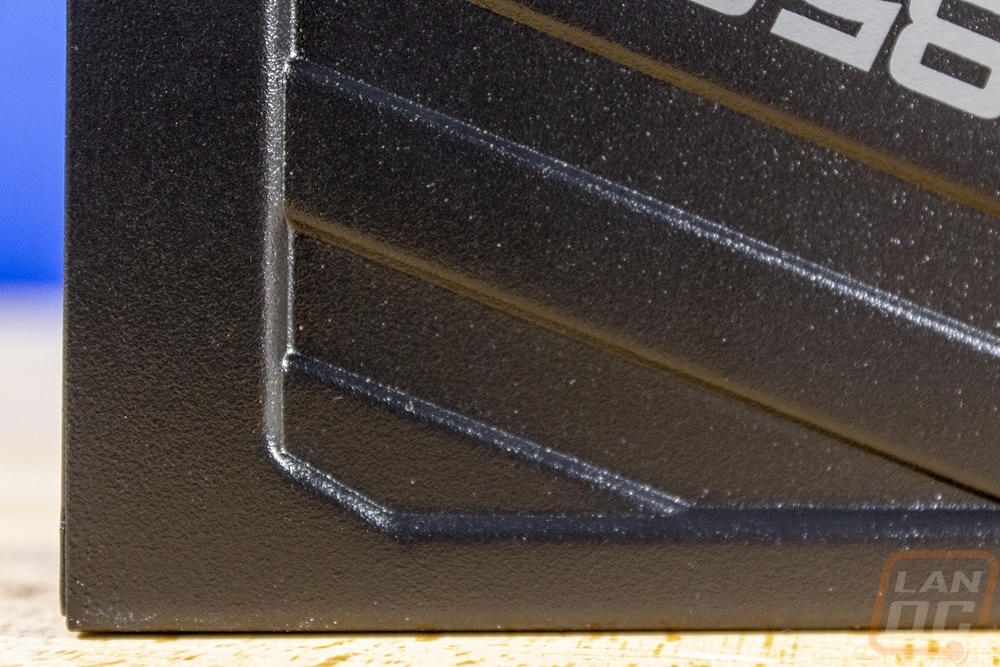 The top of the XG850 Plus Platinum ARGB has the same textured finish and here they have a matching textured sticker that has the wattage breakdown for each voltage and that shows that the XG850 uses a single rail. They have the certification logos as well as the 80 Plus Platinum badge along with a small icon that lets you know that this has a 10-year warranty which is a huge warranty, especially given that Cooler Master has proven at this point that they are sticking around and will stand behind that. I should note that the warranty does specifically mention the RGB lighting. The lighting has its own 3-year warranty. This sticker also has the model information up on top and down at the bottom another sticker in white with a barcode and your serial number on it. 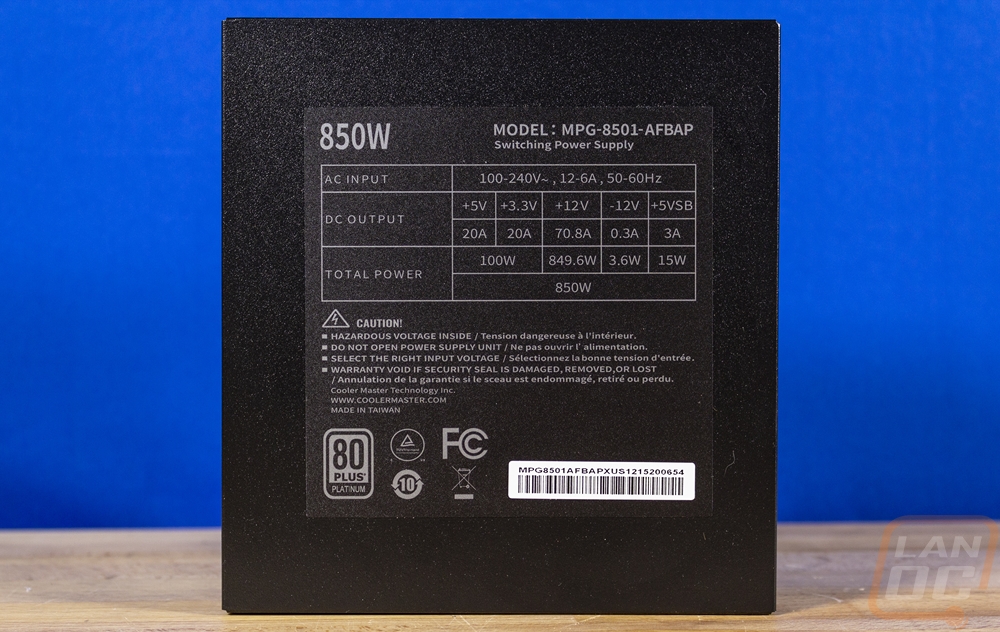 On the other side, we have the intake fan which is what keeps the XG850 Plus Platinum ARGB running cool. They packed the largest fan they could fit in the housing with it being a 135mm fan which has a black housing and a clear fan blade that can be lit up by the built-in addressable RGB lighting. It has a fluid dynamic fan bearing and from the looks of it is exclusive to this PSU. Over top of that, the vent is cut out of the stamped steel housing in alternating angled lines with surprisingly little metal between them. Airflow shouldn’t be an issue at all. They also have the Cooler Master logo in the center with the full branding on it. 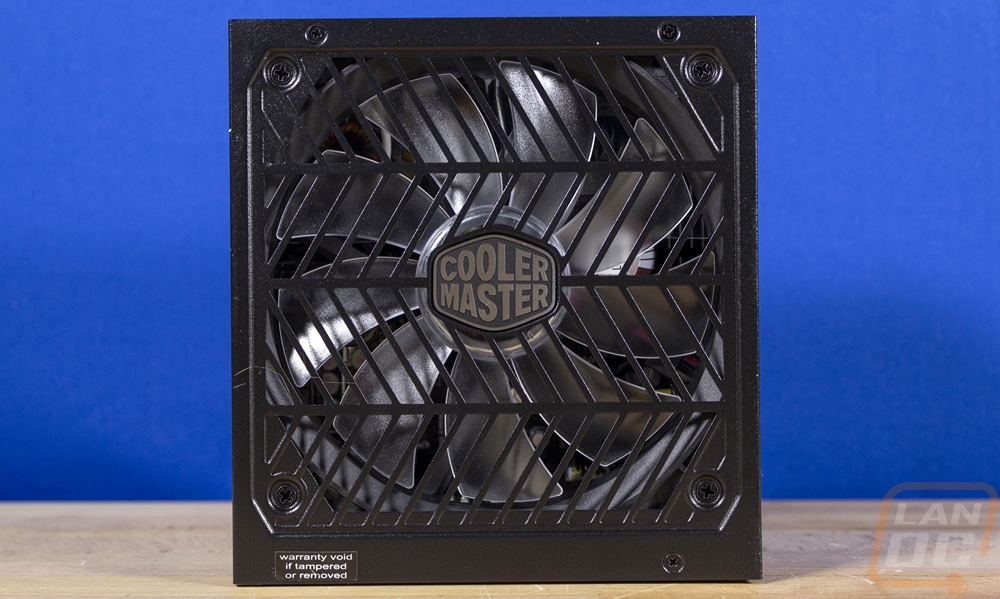 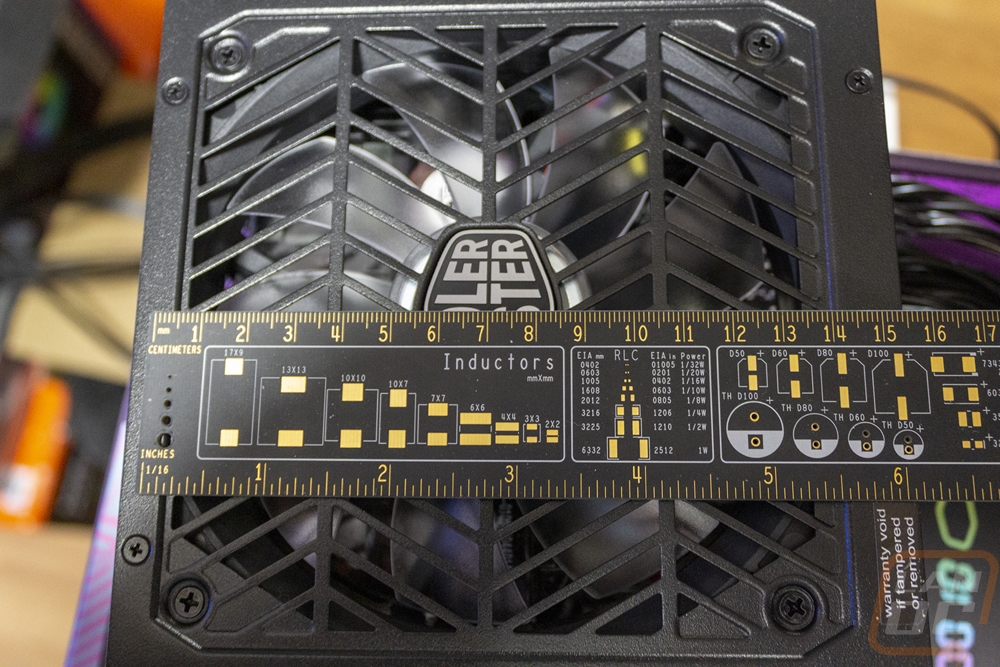 The outside facing end of the XG850 Plus Platinum ARGB has a similar alternating angled line layout for its ventilation which covers most of the back of the PSU but these vent holes are MUCH smaller and are arranged in a V shape. Beyond the ventilation, for the airflow to blow out the back also has the outline Cooler Master logo, and next to that a power switch and the C15 power plug for the power cable.

On the inside facing end of the XG850 Plus, Platinum ARGB all of the modular cable connections are all in the top 2/3 of the PSU. Each has a label printed to let you know what the plug is for. The 24-pin motherboard cable is split across the top and bottom rows. Beyond that, the top row is all of the 8-pin plugs for the PCIe and CPU power cables and the bottom has the 5-pin plugs for the peripheral or hard drive/SATA power cables. On the left, the USB cable is what you use to hook the XG850 up to control its lighting.

I mentioned it before but the XG850 Plus Platinum ARGB is a standard ATX power supply so its height and width aren’t a surprise at all with it being 86 mm tall and 150mm wide. The one variable with ATX power supplies is the PSU length and the XG850 Plus Platinum ARGB comes in at 160mm which is a little longer than the full square layout that would be on the small end of ATX but at 160mm long the XG850 isn’t far off and won’t have any issues fitting into any ATX compatible case. 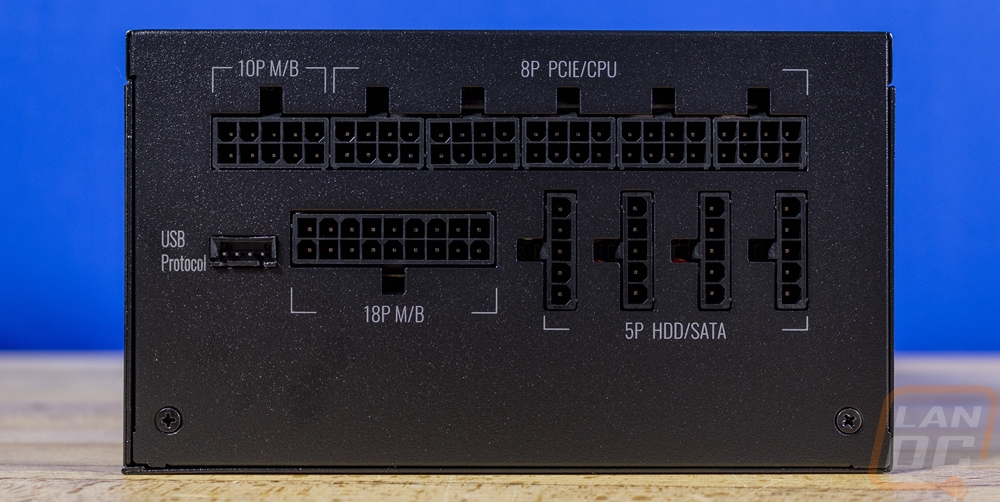 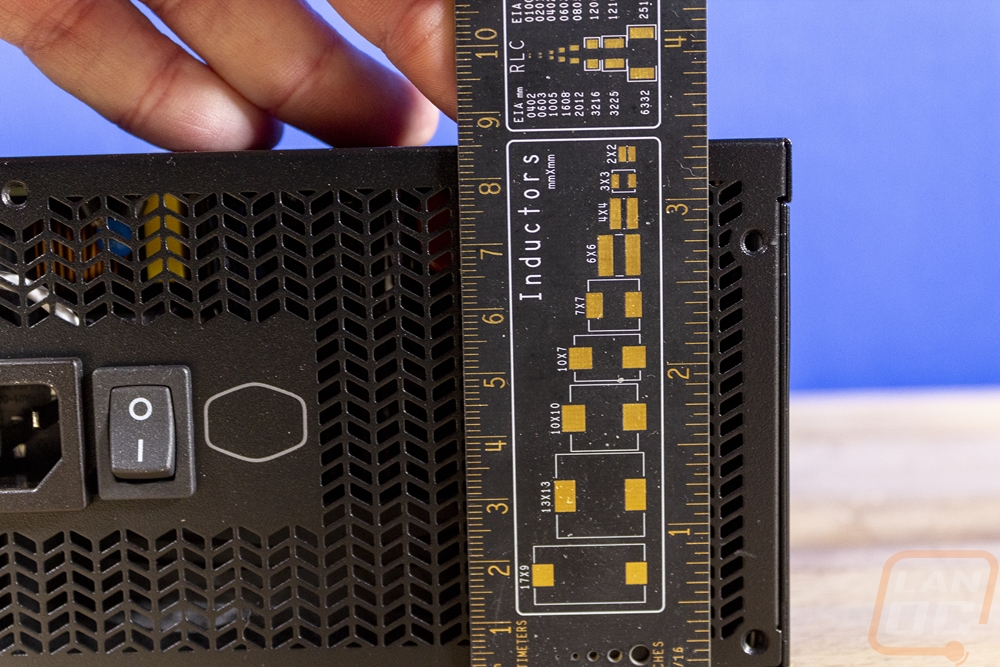 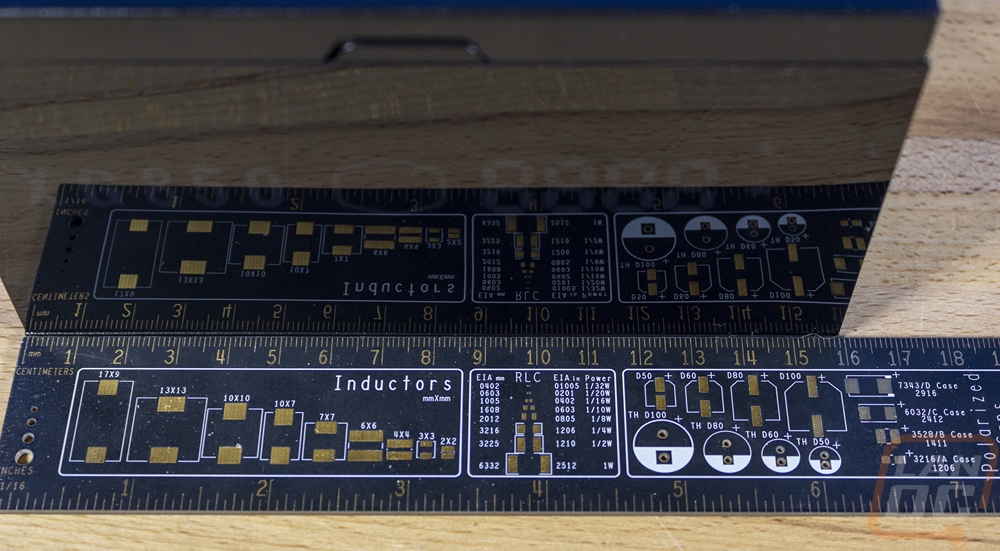 As I mentioned in the packaging section, the XG850 Plus Platinum ARGB comes with both the PSU and all of the cables in their own bags. The bag for the cables is the same canvas-like bag that Cooler Master has been using for years now which has their logo on the front and a large flap that velcro’s the bag closed. Inside the cables themselves come in a plastic bag as well with each cable bundled up and twist tied. You also get a bag with six or seven black zip ties and three reusable Velcro straps with the Cooler Master logo on them. You also get the standard NEMA 15 to C13 power cable. 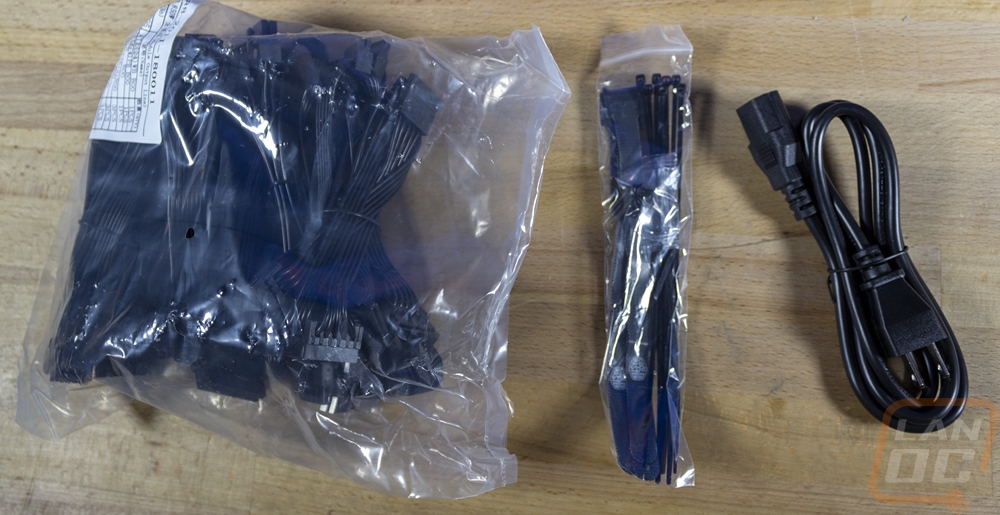 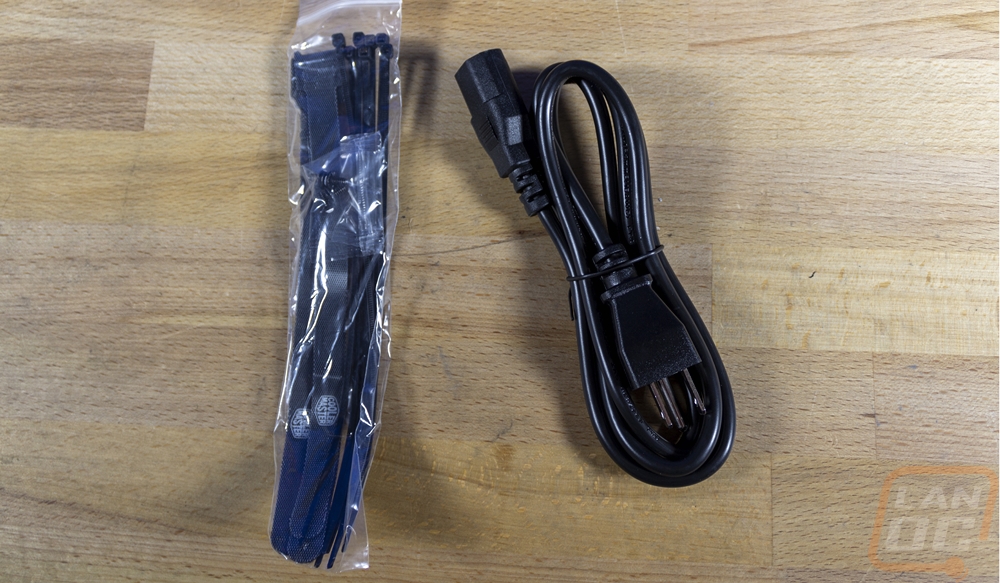 All of the modular cables for the XG850 Plus Platinum ARGB are made of the now standard flat flexible cabling which helps make wire management easier being able to fit in tight spaces and also folds up for tighter bundles of cable when you have too much length. The XG850 Plus Platinum ARGB of course has the standard 24-pin motherboard power cable which is 26 inches in length. The two 4+4 CPU power cables are also the same 26 inches in length as well. For PCIe power, the XG850 Plus Platinum ARGB comes with three cables. All three are daisy chain style with connections at 22 ½ inches and another plug at 27 inches. Both connections on each of the three cables are a 6+2 configuration which will let you plug into 6 or 8-pin GPU connections and with three cables you can run dedicated lines for the three plugs that an overclocked high-end GPU might need. Direct connections have been proven to help better power GPUs so that is preferred over running it daisy chained when possible. Then for peripheral connections, you have four cables. Three of the cables are dedicated to SATA power connection and the last cable is all Molex. I’ve been seeing cables recently that mix things up and have at least one cable with both which wouldn’t be a bad addition here for when you only need one of each. All four of the cables have four plugs each starting at 21 inches then at 25 ½, 30 1/2 , and 35 ½. The Molex cable looks slightly shorter but it is the same length, the wires having to go into the back of the plug rather than SATA power plugs that tap into the line make it look a little shorter in the picture. 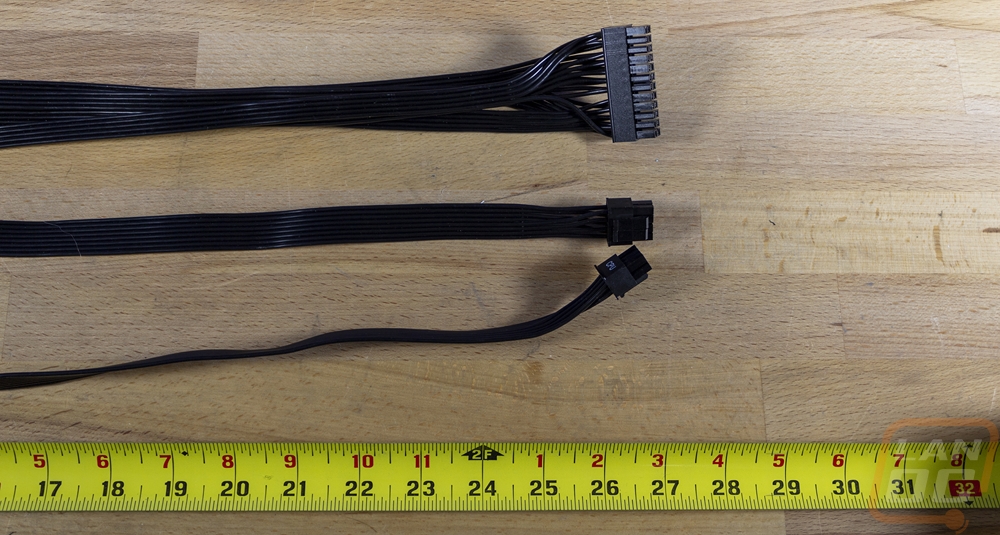 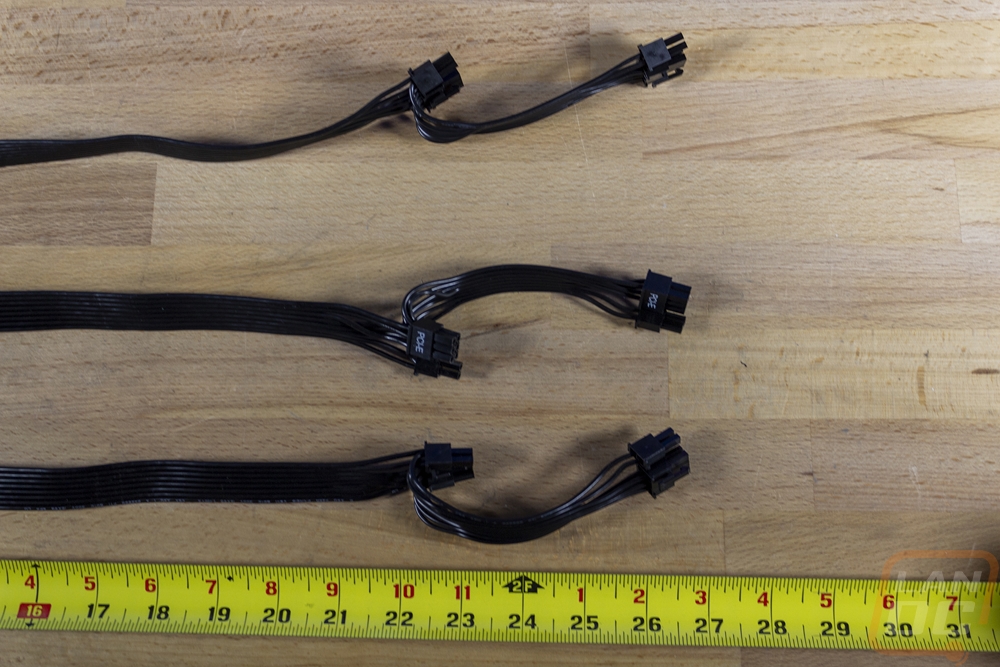 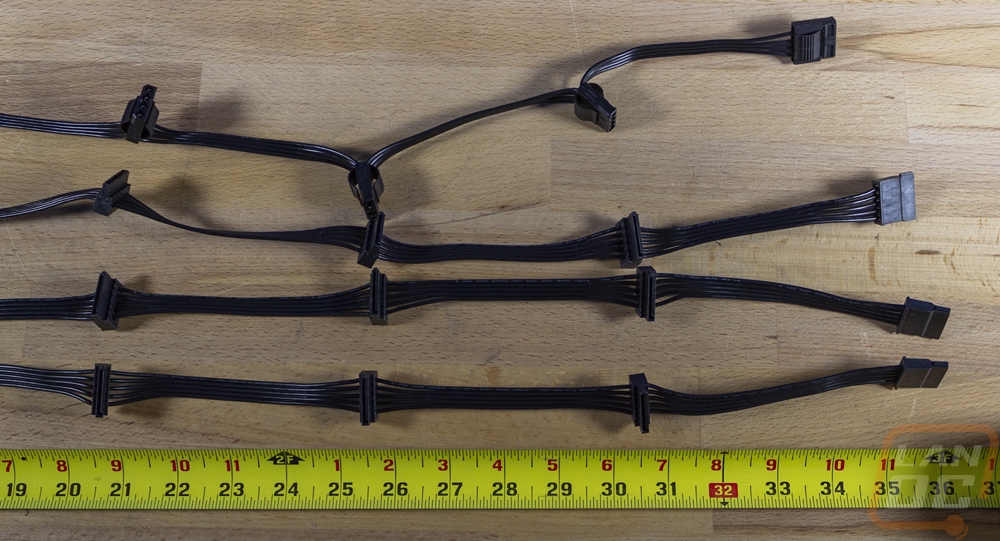 The last cable included with the XG850 Plus Platinum ARGB is its USB connection which has a proprietary connection at the PSU and a USB 2.0 plug on the other end. This also has the same flat and flexible cable style as the rest of the cables only at a lower gauge. 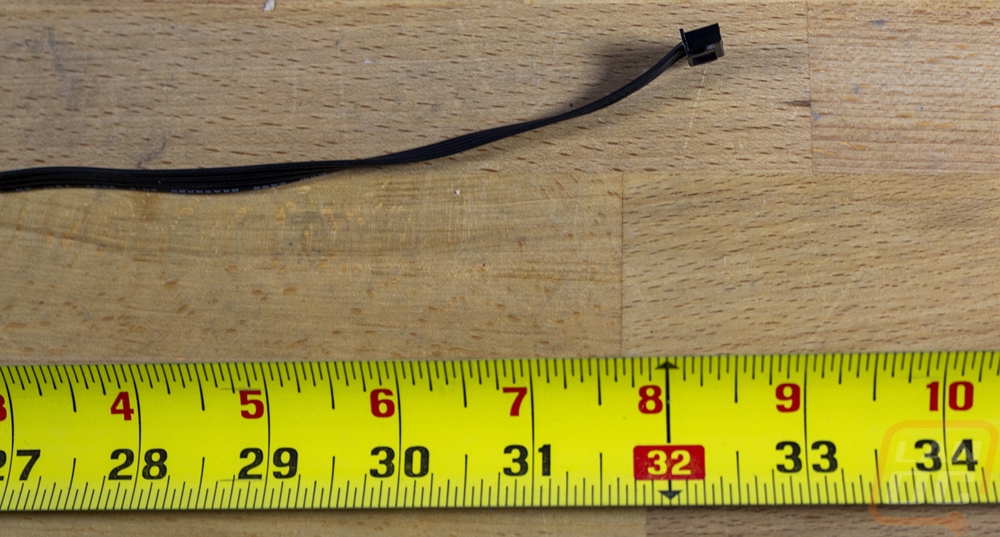 We have 1109 guests and no members online