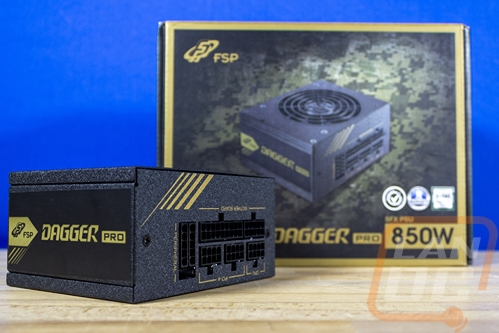 The FSP Dagger Pro 850W PSU has a standard smaller than ATX-sized box for the SFX power supply but I was surprised with FSP’s choice in the front artwork. The box does have a picture of the power supply in the middle of the front. The last FSP power supply we had in the office had a similar layout but the background art looked like lighting from a jewel where for the Dagger Pro 850W PSU they have gone the complete other direction with digital camo in green. The camo is surrounded with a gold trim which goes with the PSUs 80 Plus Gold rating which is also featured in the bottom left corner. The FSP branding in the top left isn’t too large or in your face, they have left the Dagger Pro branding to be larger and the wattage which is next to that is even larger. With the wattage they let you know that this is an SFX power supply and near the 80 Plus badge they have a few other badges to show some of the PSU’s features. 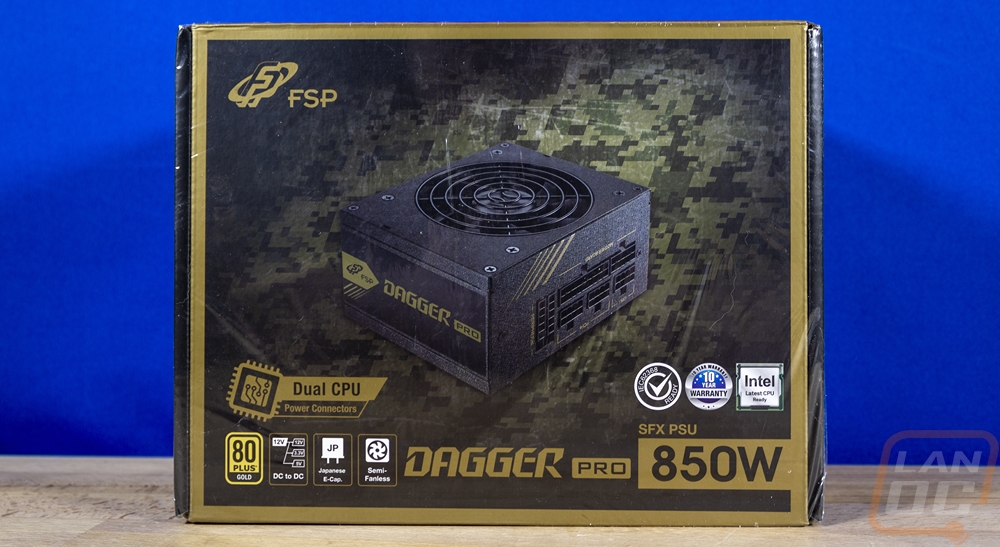 The back of the box has another picture of the Dagger Pro and it is from a different angle that shows the fan. On the left they have a listing of the features then over on the right they highlight a few of those with a picture and a longer explanation of the feature. Beyond that, the back has the FSP and model branding up top, and then down at the bottom, it has the UPC and a sticker with the serial number as well. 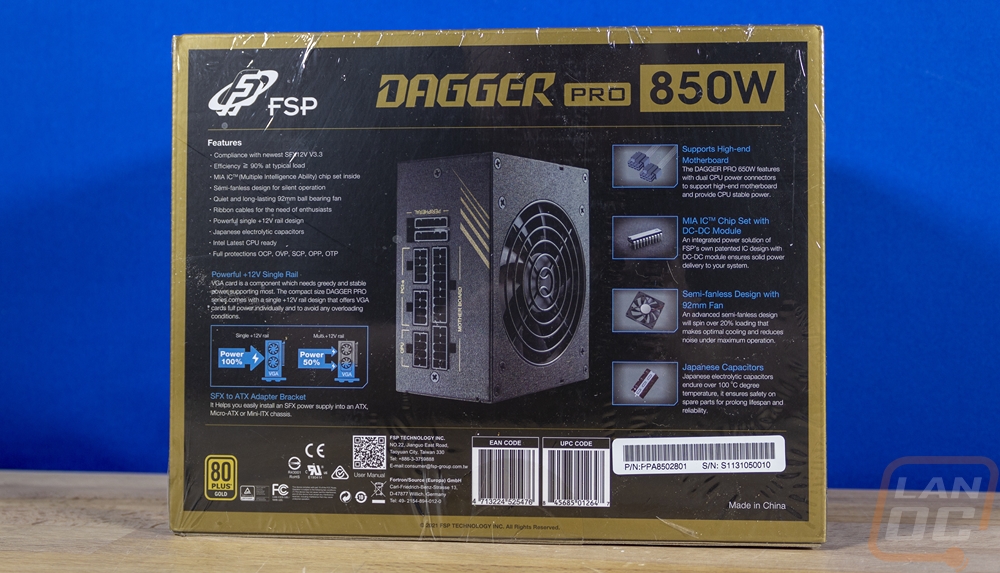 One end of the box has a line drawing that breaks down all of the cables you get as well as a list of the total connections. They also let you know which power cord type is in the box here. Then the other end of the box has a wattage breakdown that shows the Dagger Pro 850W PSU being a single rail PSI. Below that they have a graph that shows the fan noise and the RPM which highlights that the fan doesn’t turn on until over 20% load. There is a second graph that maps out the PSU efficiency as well. FSP really makes sure that they use all of the space on the box to let you know what you are getting. 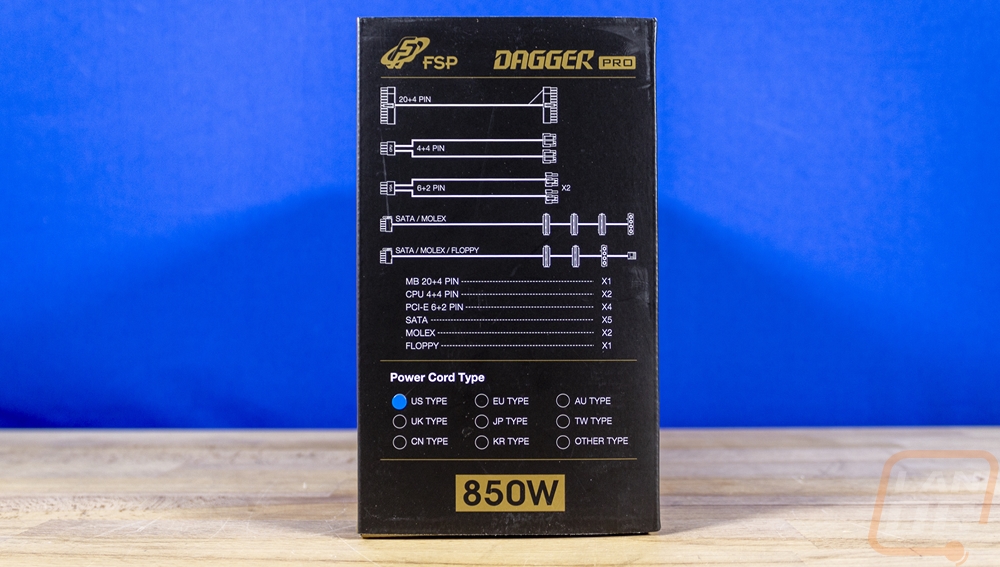 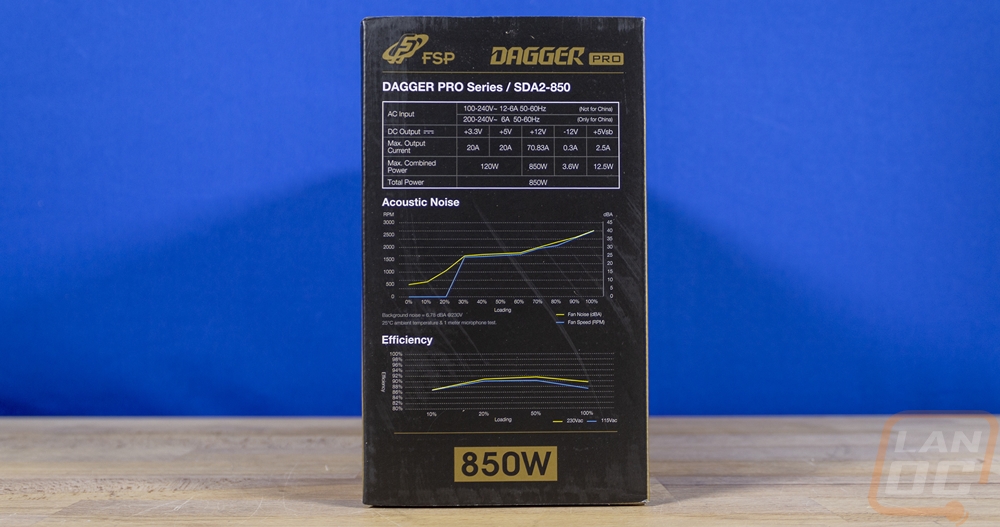 When you open the box up you have the documentation sitting up on top. The Dagger Pro 850W PSU itself comes wrapped up in a plastic bag and sits in its foam tray to keep it from moving around, interestingly though the foam isn’t up on top at all so if the box is hit from the front it could take damage that direction. There is a bag of goodies and then all of the cables are wedged into the rest of the box along with the power cable. There isn’t a reusable bag or even a plastic bag for any spare cables so plan on keeping the box for any extra cables most likely. 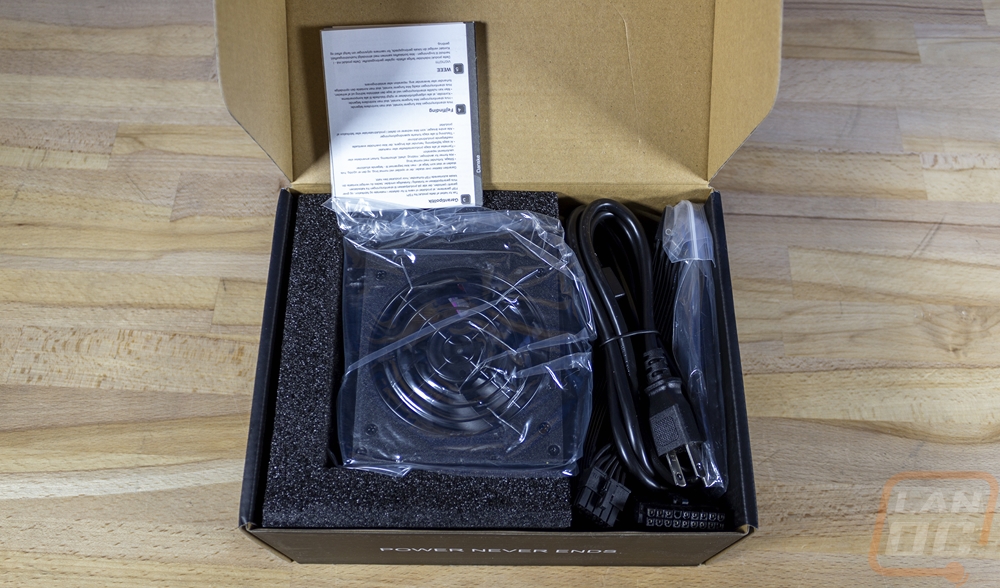