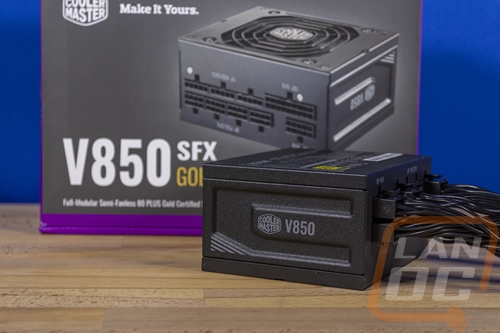 As always I should repeat the warning at the start of this coverage. This isn’t a full review, we just don’t have the equipment needed to test the V850 SFX Gold up to our normal standard. That said I did do some initial testing just to get a feel for things using the Passmark Inline PSU Tester as well as a look at the noise. The Passmark testing takes a light look at the performance and what I did see was similar to the full ATX new V series that I recently took a look at. With no load the rippled on the 12V rail was solid but it did go slightly out when I started to put a load with the system idling and again with the CPU and GPU loaded up using AIDA64’s Stress Test. The 5V Slew Rate was weird, being fine without the system powered up but dropping to zero with it on. I tested multiple times across more than one PSU thinking maybe that was wrong but it did keep coming up. 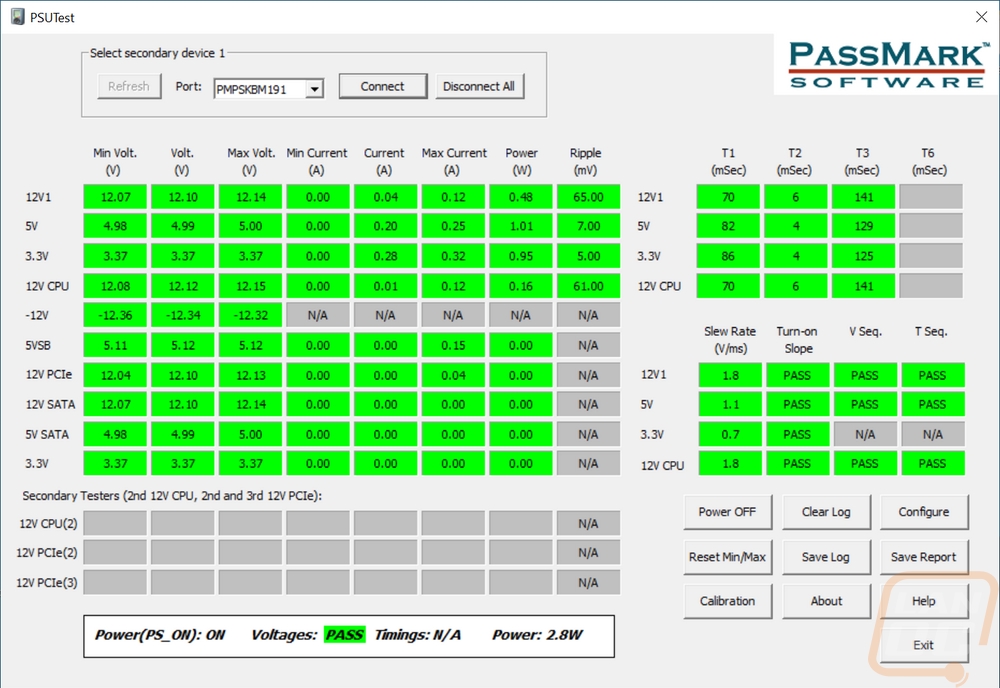 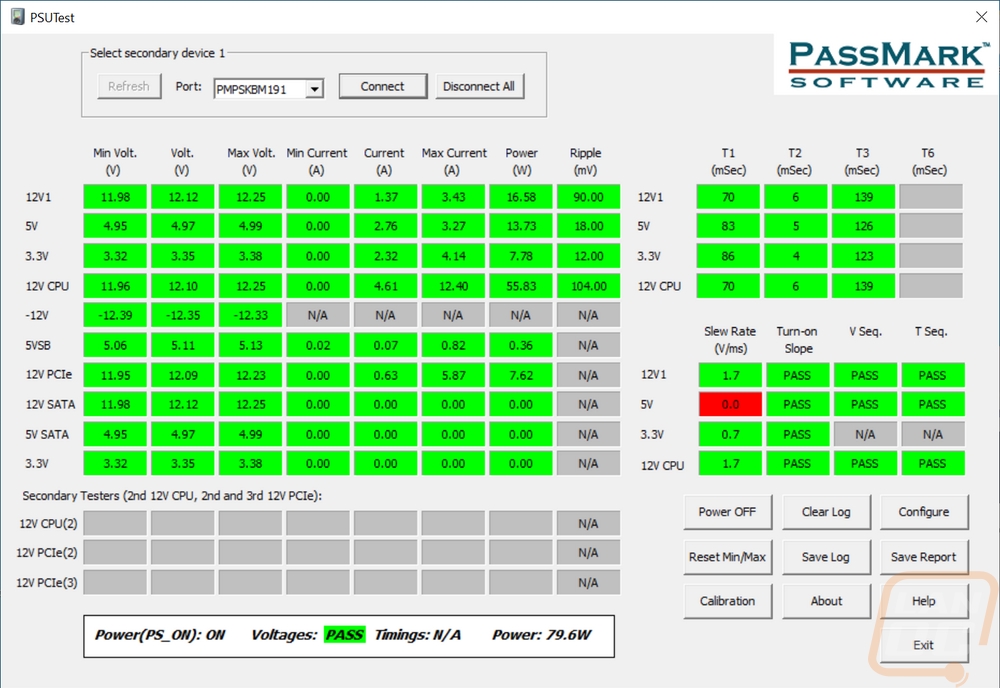 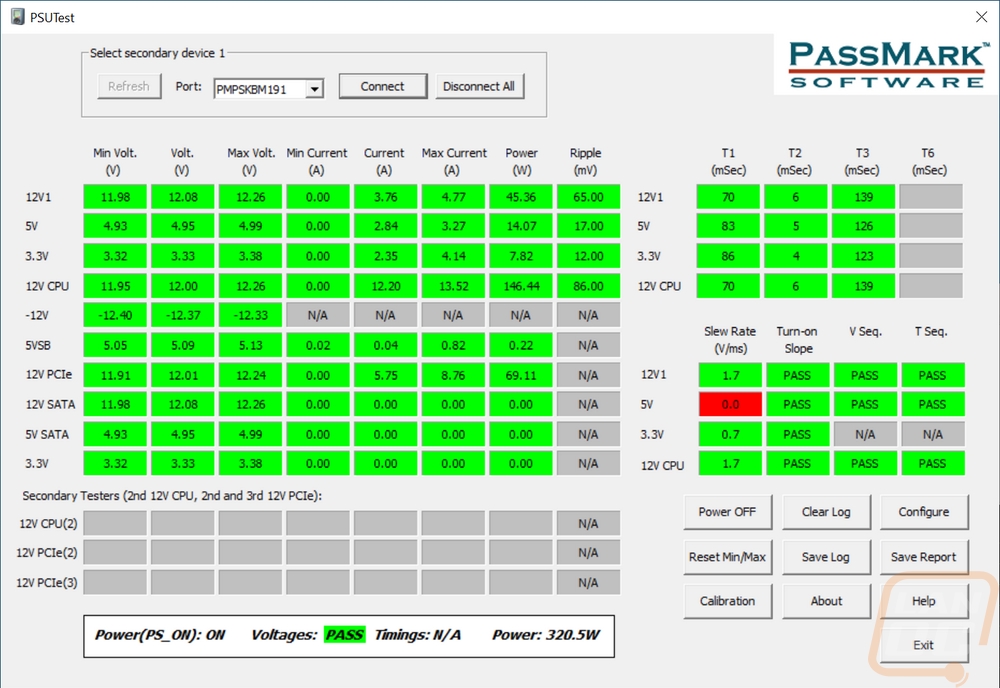 Beyond that initial look, I did also confirm that the fan does stay off at light loads and turns on as you turn things up. Our test system stayed around 74 watts at idle and it wasn’t until the GPU was loaded we finally reached enough demand to turn it on. With it, on at our load of 321 watts with an RTX 2070 and AMD Ryzen 3900X in the AIDA64 Stress Test it spun up and I recorded its noise level to be 33.6 decibels which is quiet in our office and wouldn’t be noticeable at all if the PSU was installed in an enclosed case. 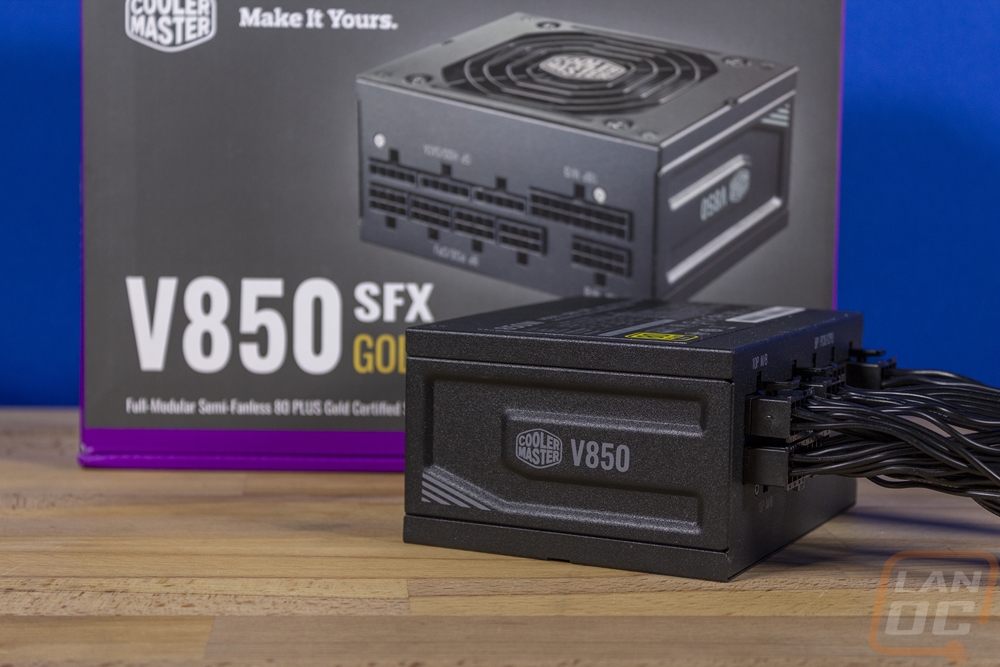 For some the Cooler Master V850 SFX Gold will be a no-brainer simply because they trust Cooler Master and they finally have an SFX option. Others might be all in because they want or need the 850-watt option which is the highest in the market for a true SFX form factor. But for most, it will still depend on pricing. Cooler Master offers an amazing 10-year warranty, a good looking PSU, the wattage options you need, and good flexible cables. But pricing is still important. Here is the breakdown of the different wattages and model numbers.

Well, let's put things into perspective. The Corsair SF750 which is a 750 watt 80 Plus Platinum SFX option has an MSRP of $184.99. The Fractal 650 watt 80 Plus Gold has an MSRP of $114.99 (when in stock), and the Silverstone 700 Watt 80 Plus Gold option is $204.99. When you see the competition, Cooler Master is doing really well on their models, especially the higher wattage options with the 850W I have here running $139.99. The 550W model is around in line, with maybe just the Fractal being a little better value but also having 50 watts less. Overall I think Cooler Master is going to shake up the market, up until now most of the good options could charge whatever they want. Assuming the new SFX Gold PSUs perform well in true PSU testing, they may be the option to get. Especially with the higher wattage options. I also hope it means Cooler Master and maybe other brands will take notice and we will see even more case options as well in the future.

You might call him obsessed or just a hardcore geek. Wes's obsession with gaming hardware and gadgets isn't anything new, he could be found taking things apart even as a child. When not poking around in PC's he can be found playing League of Legends, Awesomenauts, or Civilization 5 or watching a wide variety of TV shows and Movies. A car guy at heart, the same things that draw him into tweaking cars apply when building good looking fast computers. If you are interested in writing for Wes here at LanOC you can reach out to him directly using our contact form.
Discuss this article
Log in to comment
Posts in discussion: Cooler Master V850 SFX Gold