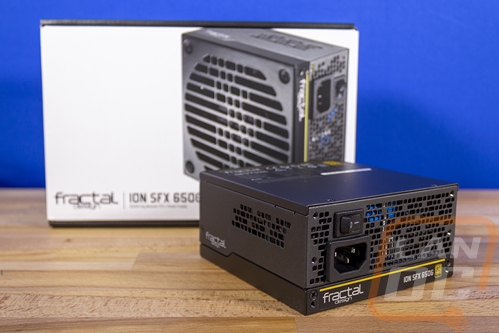 If you don’t have much experience with SFX sized power supplies, it might come as a surprise that they don’t all come in the exact same size. There are actually two SFX sizes that are popular. The standard SFX size is 125mm wide, 100mm depth, and 63.5mm height. The SFX-L designation that Fractal Design has made the ION SFX that I am checking out today is close with the same 125mm width and 63.5mm height but the depth matches the width at 125mm. A lot of the higher wattage SFX power supplies have been in the SFX-L form factor due to their size and the larger size also helps a lot with cooling. But you do need to make sure that SFX-L is supported by your case because not everyone does. What I like about the SFX-L size though is it has the same scale as a full-sized ATX PSU. So the ION SFX 650G name also gives us a few indications of what we are working with, other than the SFX should maybe be SFX-L. The 650 is the wattage and the G at the end doesn’t mean this is a gangsta or an OG, it means the ION is rated 80 Plus Gold which isn’t the highest efficiency rating but still very high and unless I am building a budget build I normally aim for an 80 Plus Gold rated PSU because they are efficient without the huge prices of platinum and titanium rated models. The Gold models are available in the 650 I am looking at here and a 500 watt as well. Fractal Design also has platinum-rated IONs in four different wattages as well. 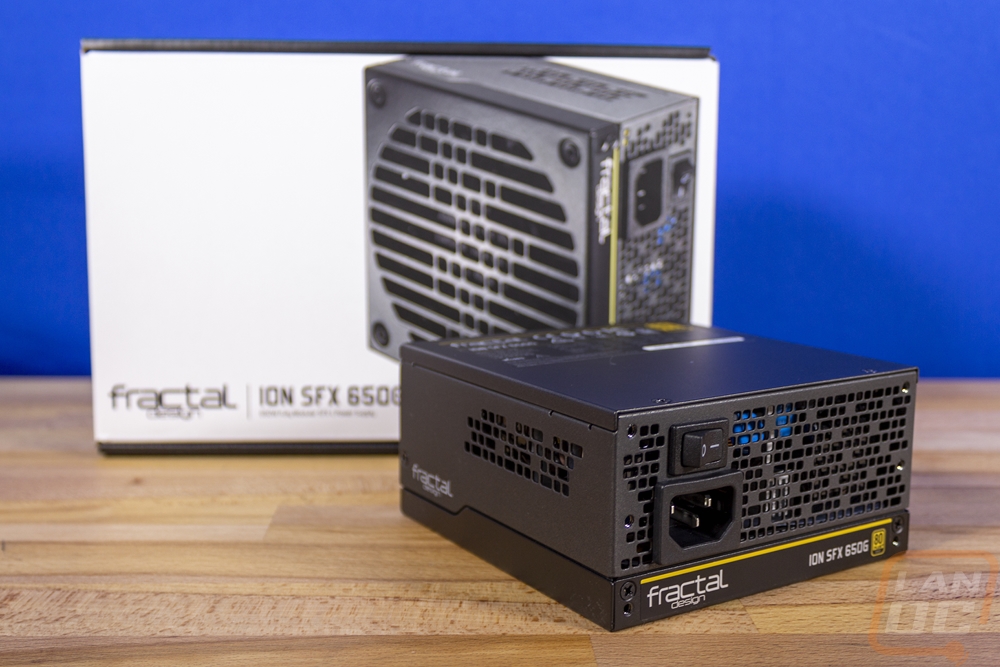 So taking a closer look at the ION SFX 650G starting with what would normally be the outside facing end. Fractal Design has included the 80 Plus Gold rating right next to the model name as well as a touch of gold with the gold line that runs above both the model and their brand names. The rest of the back is where most air ventilation will vent out of the PSU and they didn’t go with a standard vent hole layout. Theirs are rounded squares and rectangles but with a more random layout that actually looks really good. The back also has a standard power plug and with it a power switch as well.

For the sides, normally there wouldn’t be anything going on but both sides do have the same black stripe along the bottom as the rest of the ION. That stripe also drops down and has a Fractal Design logo on both sides, which given the branding on the outside as well, they aren’t skipping any chance to make sure you know their brand. Then on the left side if you are orientating by the rear of the PSU has a small batch of the same random venting. This is really interesting because normally PSUs intake through their fan then only vent out the back of your case, but with this, you can expect the ION to vent a little heat back into the case. I guess maybe they needed to add a little more ventilation due to the random hole design not being as unrestricted as a standard design. But that is me just guessing from what I can see.

The inside end of the ION SFX 650G also has that black wrap along the bottom, but no Fractal Design branding this time shockingly. This is also where all of the modular cables hook up. You can see that everything is labeled including the split 24 pin connection, three peripheral plugs, and the three PCIe and CPU power plugs have two on the bottom row and one on the top. You also get a good look at the dark grey finish with the black contrast in the middle, most power supplies stick with black but I dig that Fractal went with the grey. It should match a lot of today's black and grey motherboards and video cards as well.

So with all of the sides having that black accent along the bottom, it isn’t a surprise that the bottom of the ION is also black. This is the fan side Fractal Design didn’t go with the standard wire grill for the fan grill. The 120mm fan is protected by the stamped sheet metal with a design that shares the same rounded edges as the other vent holes only much wider and there aren’t any solid sections. You can see how the 120mm fan is just packed into the SFX-L casing but the large fan also means better cooling at lower RPMs. The ION also has a 0-spin fan model which doesn’t spin the fan up until you are pulling just under 350 watts so in a lot of situations it should make no noise at all. The fan has an FDB or fluid dynamic bearing which are normally quiet and have a good life on them. 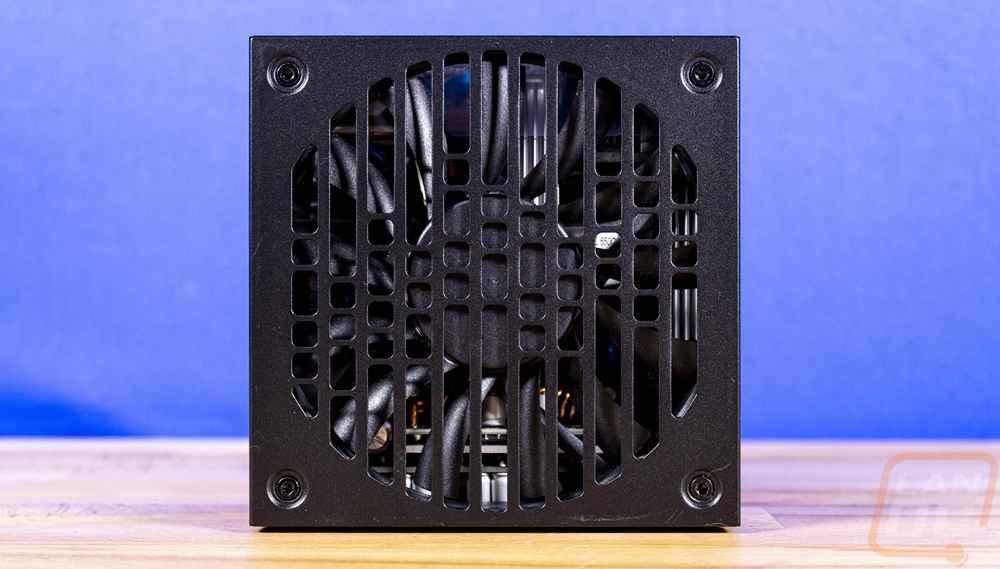 The top of the ION has that dark grey finish and is also where they hid the big sticker with all of the normal certification information. It also has the model information, a big 80 Plus Gold logo, and a breakdown of the power output per voltage that makes up the total 650-watt capacity. Then, of course, you have the serial number in case you have to take advantage of that 10-year warranty. 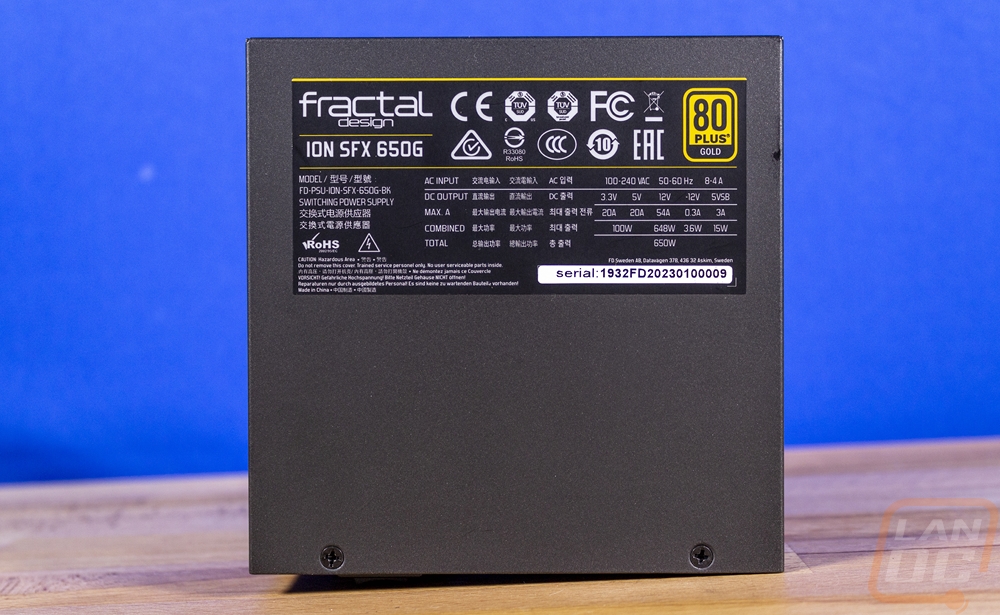 In addition to the ION PSU, you do get a few accessories with the power supply. The US 3 prong power supply cable is a given, but I was excited to see the stamped steel SFX to ATX adapter. Like with the bag the cables come in, most SFX power supplies used to come with an adapter but now only some do and some of those won’t even be finished with the nice black finish that Fractal Design did here. Another surprise was the inclusion of 8 black screws, even the models that do come with an adapter never include screws to actually use it. They normally just come with the four screws needed to mount the power supply itself. Fractal also included a generous amount of zip ties, which sometimes PSUs only get 3 or 4 and they also slipped in a few Fractal Design branded reusable Velcro ties as well. Then last but not least you also get a user guide for documentation. 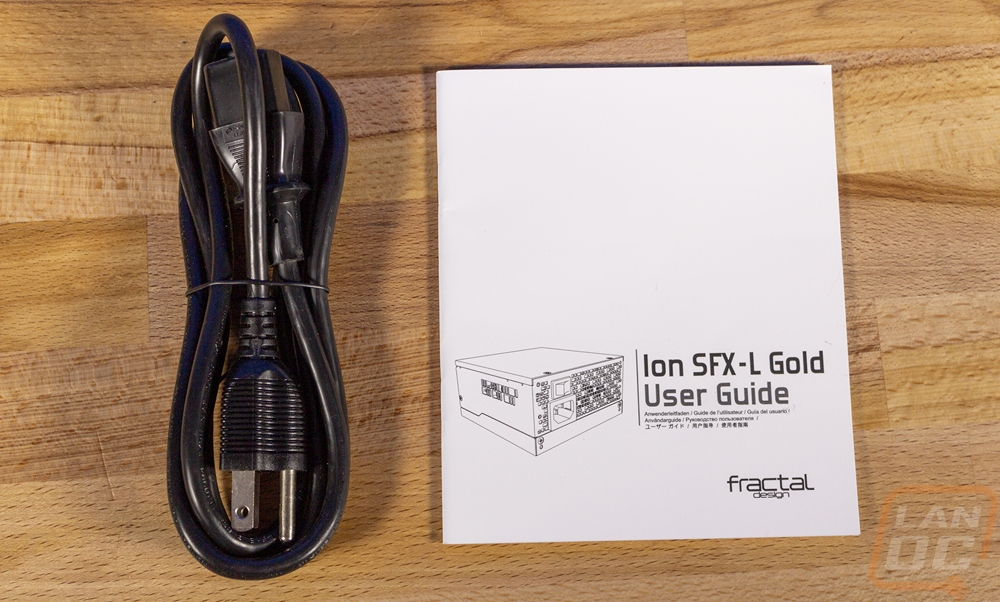 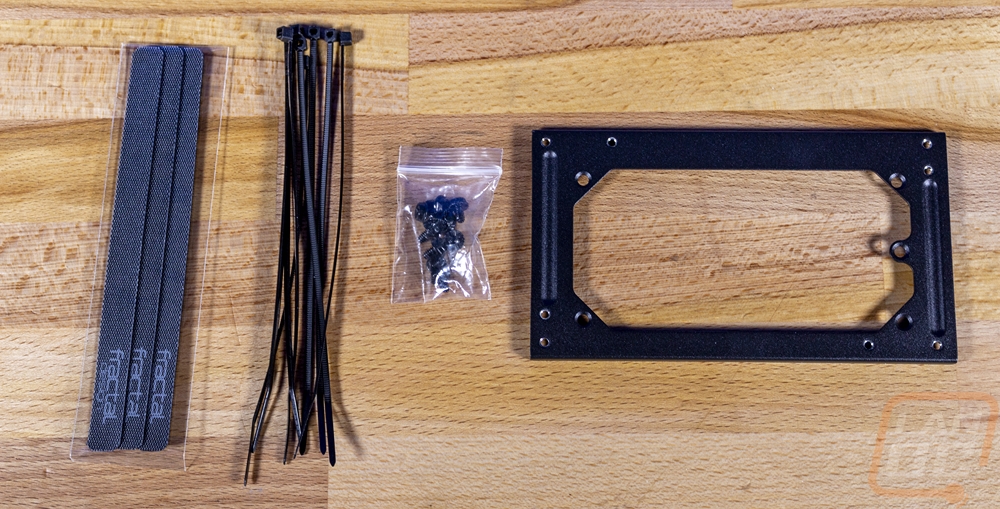 Being fully modular, the ION SFX 650G comes with a bag full of cables and at first glance, they look like your standard flat/flexible cables with a glossy black finish. I will say though that actually touching and bending the cables shows that they are a little different. Fractals documentation tells me that they increased the strand count and reduced the strand diameter down to 0.08mm each strand to allow the cables to be more flexible than the “standard cable”. Which is impressive because the standard flat cable is actually really nice to work with, having even more flexibility is a big bonus for routing and hiding cables. They also changed the PVC insulation on the cables to help with flexibility which together is what they call their UltraFlex cables.

You get a total of seven cables with the ION and the layout is relatively standard. The 24 pin cable has the double plug on the PSU side because of the addition of signal cables and while it does use the same cables as the others it is sleeved with a black sleeve to keep the big cable all packed together. It is the shortest cable as well at just past 15 inches. The CPU 8 pin power is the next longest cable at 18 inches. Then there are two PCIe cables that have the same 18-inch length from the PSU to their first plug. But both cables have a second plug where you can power a full video card off of one cable. Both plugs have a 6 or 8 pin configuration for flexibility as well. 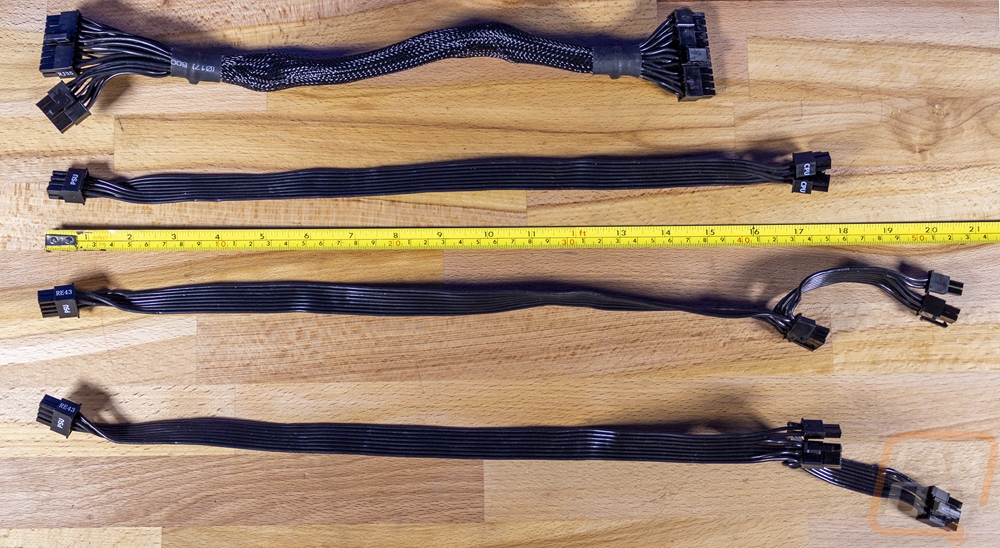 Then you have three peripheral cables which are where things get interesting. All of the main cables are all shorter because this is an SFX style PSU and you don’t need or want long cables taking up extra room. Which makes it weird that the two SATA cables almost look to be from an ATX kit. They have four plugs which is one more than normal and they have a total length of 33 inches! They have a flat cable style as I mentioned and all but the end SATA plugs are a pass-through design that is low profile because the cable doesn’t stick out of the back like on the end plug and the Molex plugs. Speaking of which, the Molex cable is still long at 21 inches long but normally where there would be three plugs here, they have cut it down to two. Either Fractal Design has an interesting SFX case coming that needs these ultra-long cables or these three were sourced from their ATX kits to save money. All I know is if I used these in any of my SFF SFX builds I would have to shorten them down significantly, something I already do with the normal SFX length peripheral cables, but these would need even more work.