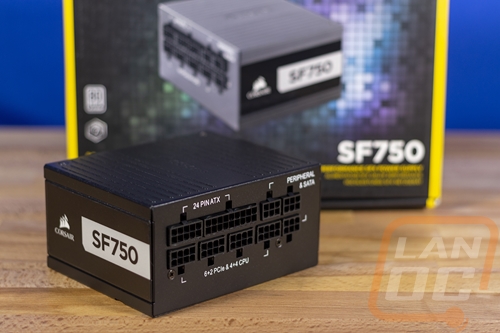 Before diving into the features of the SF750, I did want to point out the stick on warning that it comes with. Just like with video cards with a silent or 0 RPM mode, it looks like Corsair has had more than a few people think their PSU is bad and call or return them. They put a sticker that hands off over the plug as a warning that the fan will not spin up on low loads. Sadly this stickers adhesive was crazy and was a pain to clean up. A simpler sticker that sticks right on to the power plug might do the same job and not be as much trouble. 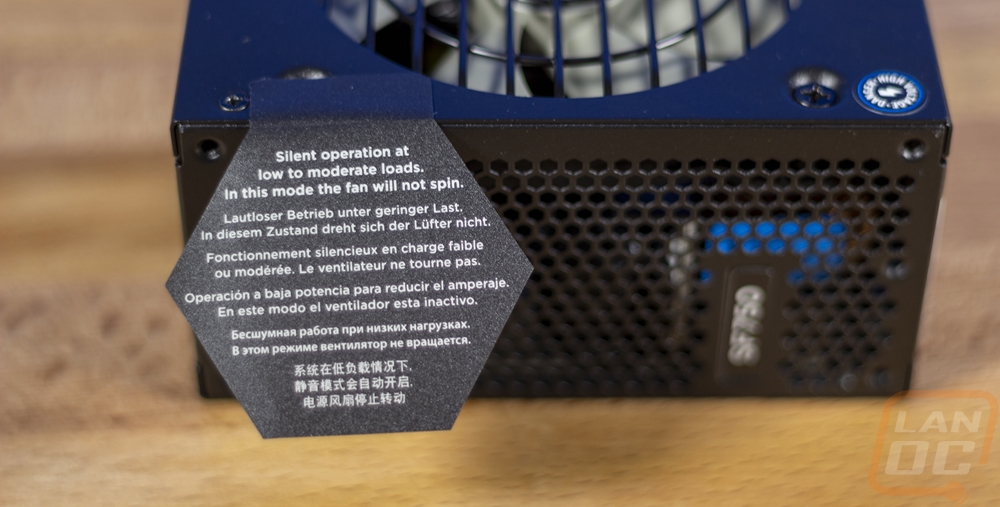 As Henry Ford once said, you can have any color you want, as long as it’s black. The SF750, just like almost every PSU is all black with a textured powder coat finish and it looks good! Most importantly it is a standard SFX size as well, which is what makes the 750 watts it can put out even more impressive. A SFX PSU comes in at .79375 Liters which with 750 watts in it means the SF750 has a watts per liter of 945! For comparison, the 700 watt Silverstone SX700-G comes in at 882. With SFX being so small, even small jumps make huge jumps in watt per liter. So being the standard size means the SF750 comes in at 100mm x 63mm x 125mm which if you haven’t seen in person is actually really small compared to a standard ATX power supply. 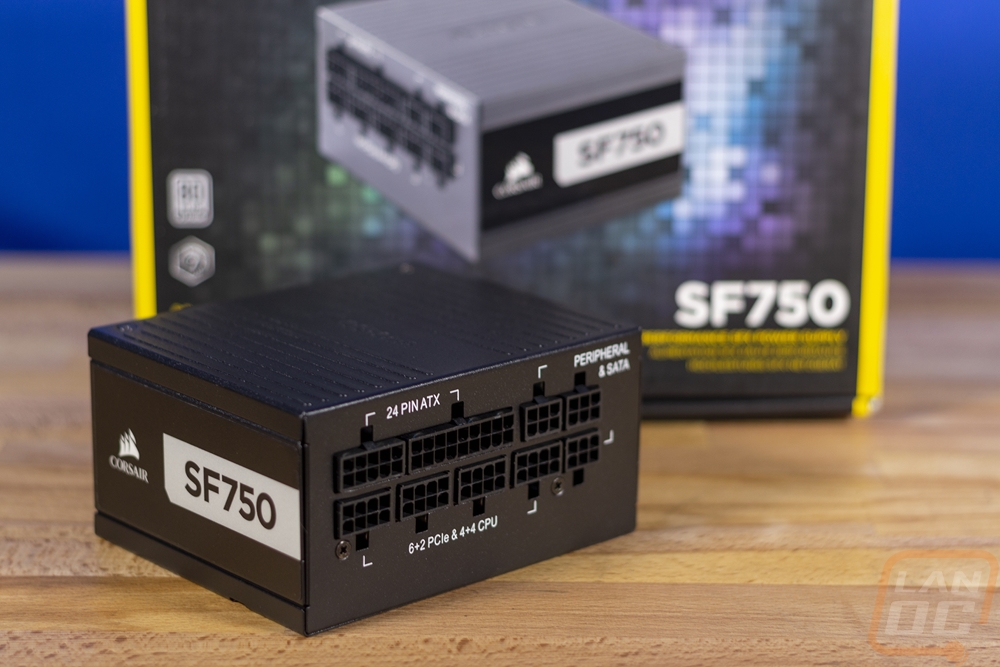 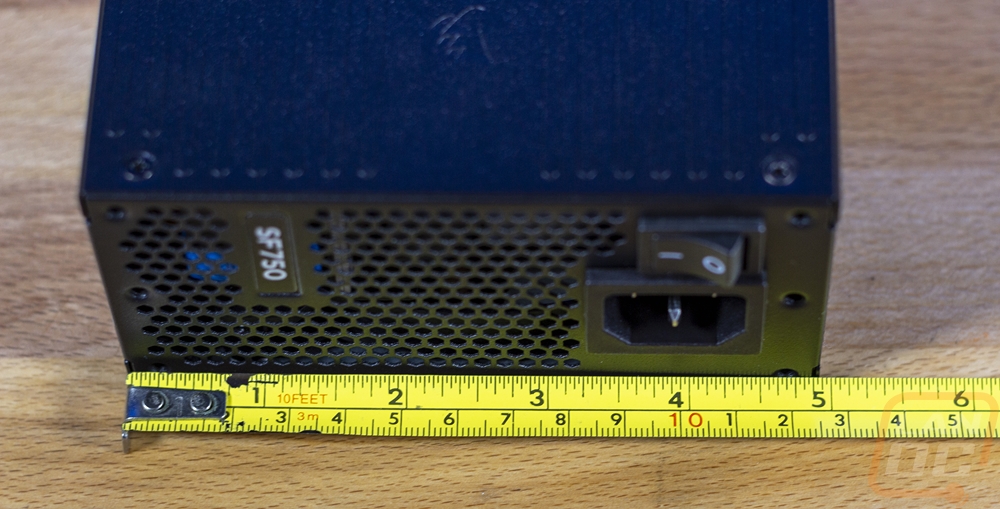 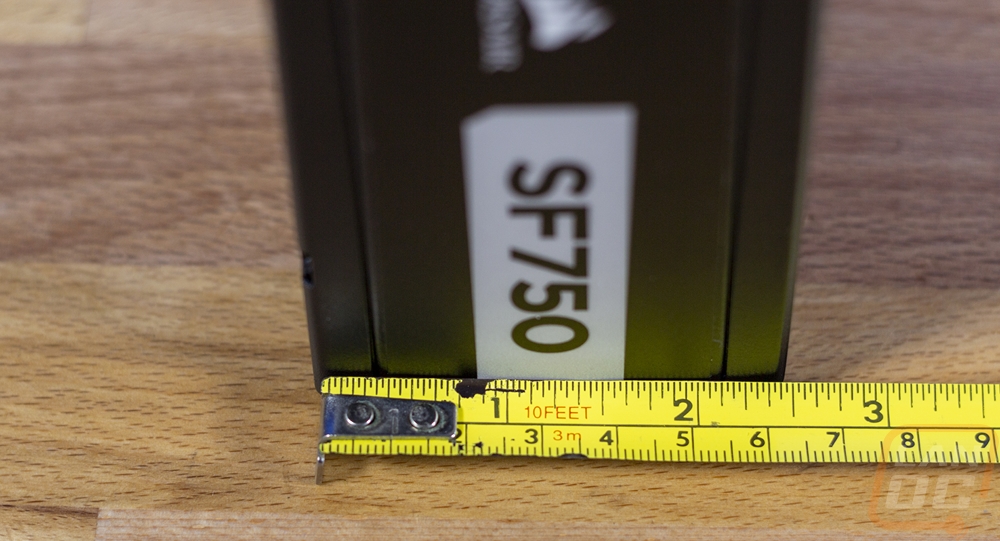 With the fan facing down and your PSU power plug or outside facing side on the left the main side you will see in any traditional layout is going to be the side with the Corsair logo and the SF750 branding. Corsair kept this extremely simple with grey for the trim color. SFX PSUs are often not visible in the really small SFF builds, but this has to be the best looking SFX sized PSU simply because of how simple this side looks and the top7-year which I will cover in a minute. On the other side, Corsair has hidden all kinds of stuff all on this one sticker. This is where all of the required certification logos are, OC passed stickers, and also a breakdown of the output per voltage. This is the side you want to make sure isn’t ever visible, but I like that they tried really hard to keep it all here, including the OC stickers which I know Silverstone sometimes has stuck on in visible areas.

Now for the two ends, we have the outside end and the inside end. The outside end is in the second picture below and it has just four things going on. You have the power cable plug and above it a power switch. Then most of the back is covered in hexagon’s which are for ventilation. The fan on the bottom pulls air in and this is where all of that air exits the PSU and most of the time your case. The fourth thing is just a small landing in the hexagons that has the SF750 branding on it. On the inside end, there is a little more going on. Namely all of the plugs for the fully modular cables. All of them have bright white labels pointing you in the right direction as to what to plug in to where. The top left has two plugs for the 24-pin  motherboard cable, having them split up like this is normal and you will also notice there are more than 24-pins, those are for the sense cables. The plug on the motherboard side still has 24 though. Next to that on the top right are two peripheral or accessory cable connections and bellow them is a third. These are 6-pin plugs for the two SATA and one Molex cables. Then the four 8-pin plugs on the bottom left handle both CPU power and PCIe and you will notice that they all have the same plug shape so there aren’t CPU specific plugs here.

Now I know I said the side sticker is what makes this such a great looking SFX power supply but the more I look at it I think it might be the textured finish which you get a good look when you see the top of the SF750. The top also has lines embossed I it with the Corsair logo in the center debossed into the sheet metal casing. There aren’t any other colors, just black and no stickers. Just to the point. On the flip side, the bottom of the SF750 has a grey fan in the center. This is a 92mm fan and Corsair says it has rifle bearings. I mentioned earlier that it does have a zero RPM mode where it doesn’t need to turn on until you are over 300 watts. The fan has the Corsair logo on it and I just have to point out that Corsair worked hard to try to get branding on the SF750 visible from every angle. Beyond that, the fan is covered by a wire cover. They went with a 92mm fan because with standard SFX PSUs there isn’t enough space for anything larger. The SFX-L PSUs, however, have been packing in 120mm fans for a while now. There is a sticker on this side, one covering one screw to warn people of the high voltage inside. 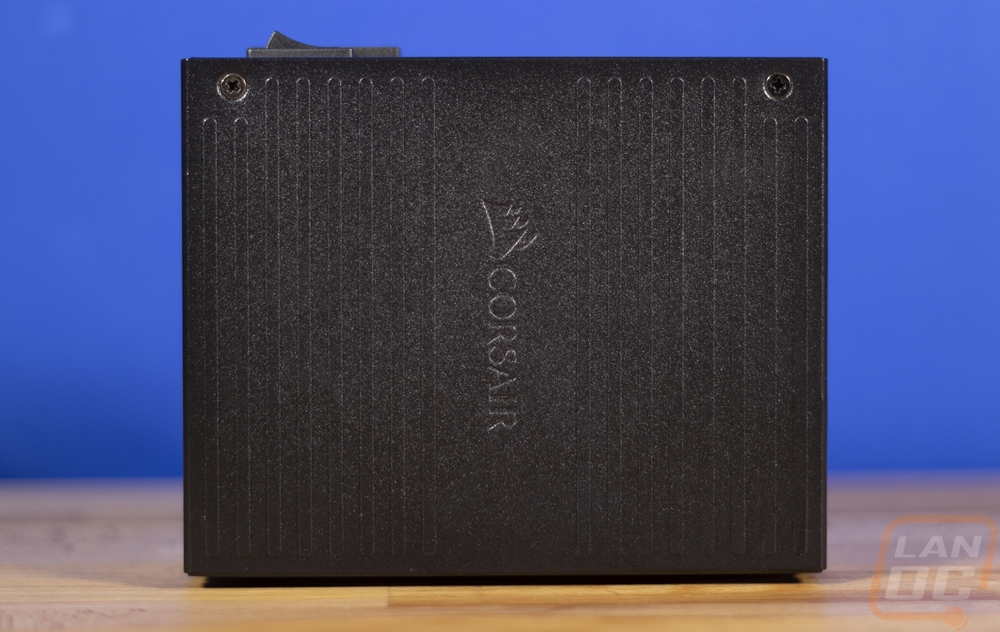 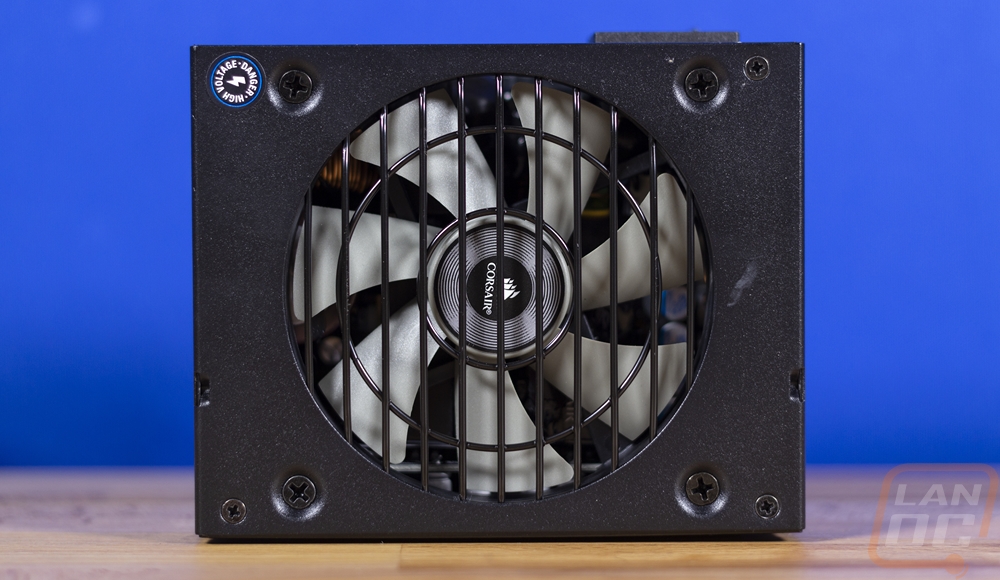 So here is the breakdown of what you get. The first three cables I have are the 24-pin motherboard power and then two 8-pin EPS CPU power cables. This is a step up from what you would see with most SFX PSUs, normally you would only have one. This shows a clear focus on making sure whatever small build the SF750 is going into, it is ready to rock for high-end components. If the 750-watt capacity wasn’t enough of a clue. The 24-pin is just over 13 inches long and is the shortest cable in the box, but being short also means a lot less cable to hide. Then the CPU power cables are both around 17 inches long.

The next two cables are matching PCIe power cables. Both have a dual connection configuration with dual 6+2 plugs, one at 16 inches and the other a little over 3 inches past that. The dual plus with both 6 and 8 pin options is going to cover everything. On the off chance you have a video card that needs three plugs, you have the second cable. In other words the SF750 is multi-GPU ready. The way the piggyback cables connect into the first plug and the individual sleeving together makes for a bit of a tangled mess if you aren’t careful, namely with the extra +2 plugs. Cable combs would make a world of difference. 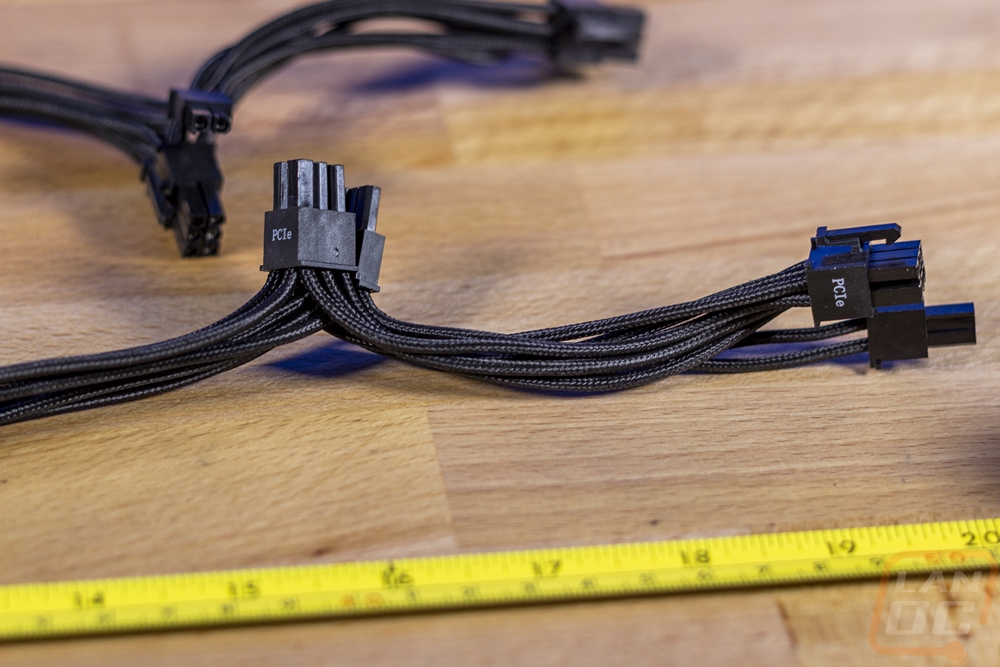 The last batch of cables are all accessory cables. Being an SFX PSU, you will notice there are fewer accessory cables than you might find on an ATX power supply. You do get two SATA power cables and one Molex. The SATA cable is 18 inches in total length and it has four plugs all evenly spaced out. Going with individually sleeved here is a bit of a downside because you don’t get the cool right angle SATA plugs that are lower profile and can actually me modded shorter easily or you can move the plugs. For this setup the cable goes into the plug and a second cable comes out, so not only are the plugs longer but you have the bulk of the cable sticking out at the end. The Molex cable is shorter at 14 inches and has three plugs, it has the same cable in and new cable out style, but that has always been the case with Molex. 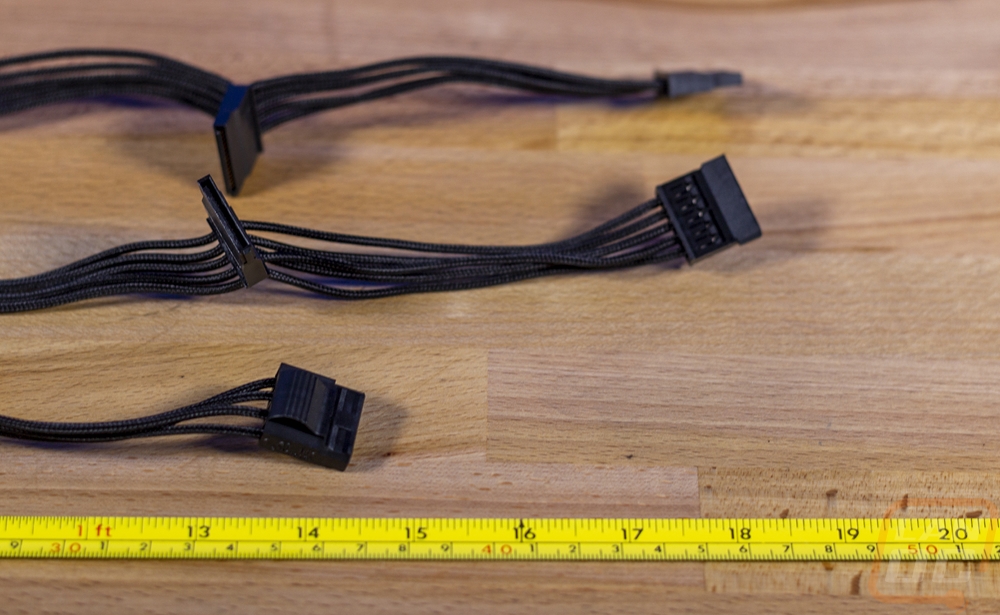