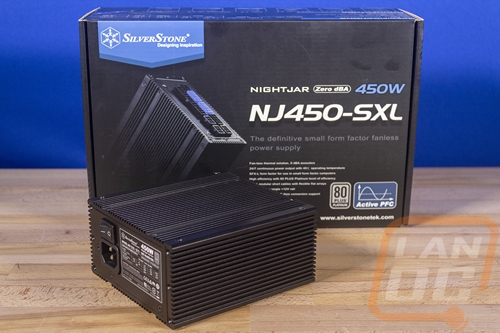 At this point, I couldn’t even count how many SFX power supplies that have come into the office. I love the form factor, even when building in smaller cases that can fit a full ATX power supply. Early on the SFX form factor was limited in power and because of the overall density struggled with heat and with that noise. That has improved a lot over the years, especially with Silverstone being a champion for SFX all the way from the start. They used to be the only option available if you wanted an SFX power supply with modular cables. Recently they introduced a few new SFX power supplies and one really stood out. This time it wasn’t about the jump in wattage, this model, in fact, has the same 450-watt rating of the early Silverstone SFX PSUs. The NJ450-SXL stands out for two reasons, it is 80 Plus Platinum rated which is great and also because it has no fan at all. The noise issues of the past can’t be an issue if there isn’t a fan to make noise right? Well, today I’m going to check it out and while we don’t do full PSU testing I am going to take a look at the thermals of the NJ450-SXL while under load to see how it does for cooling with no fan.

LanOC Reviews only covers the features of power supplies due to not having the equipment to test them up to our standards. Because of this, you will not see a performance section, a final verdict, or awards. Therefore, we prefer to call this a preview rather than a review. Thank you for understanding; we keep our standard to the absolute highest for you, our reader. 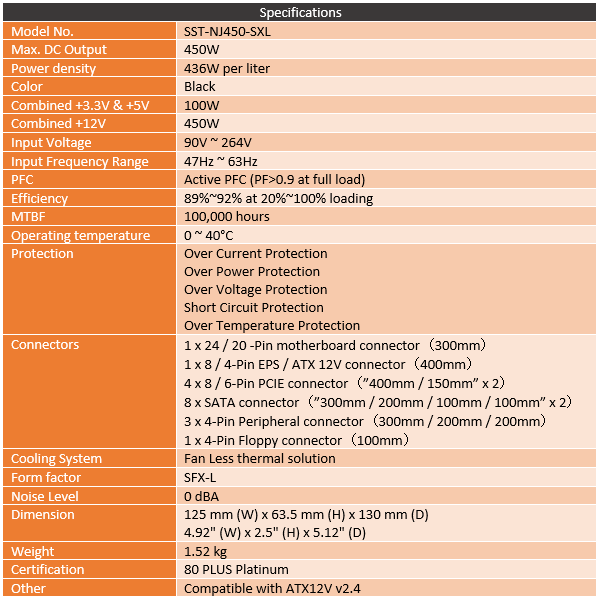 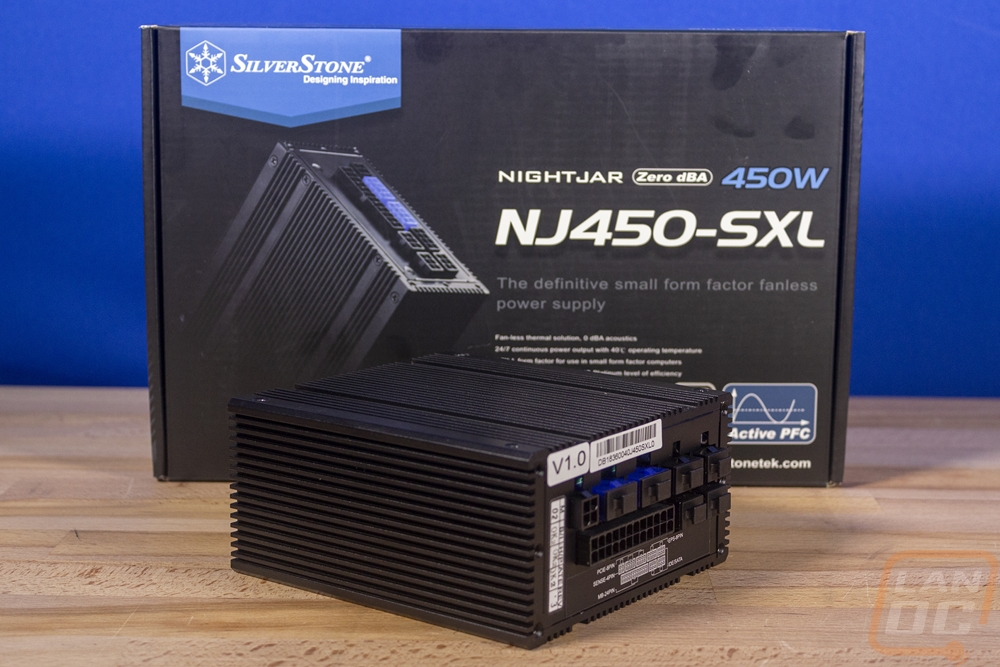 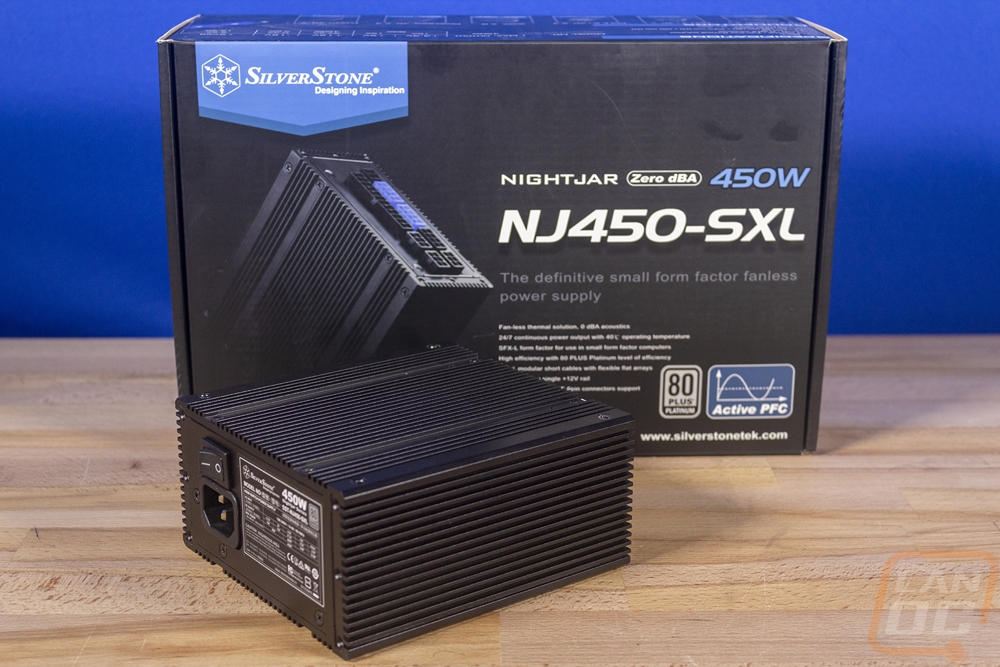 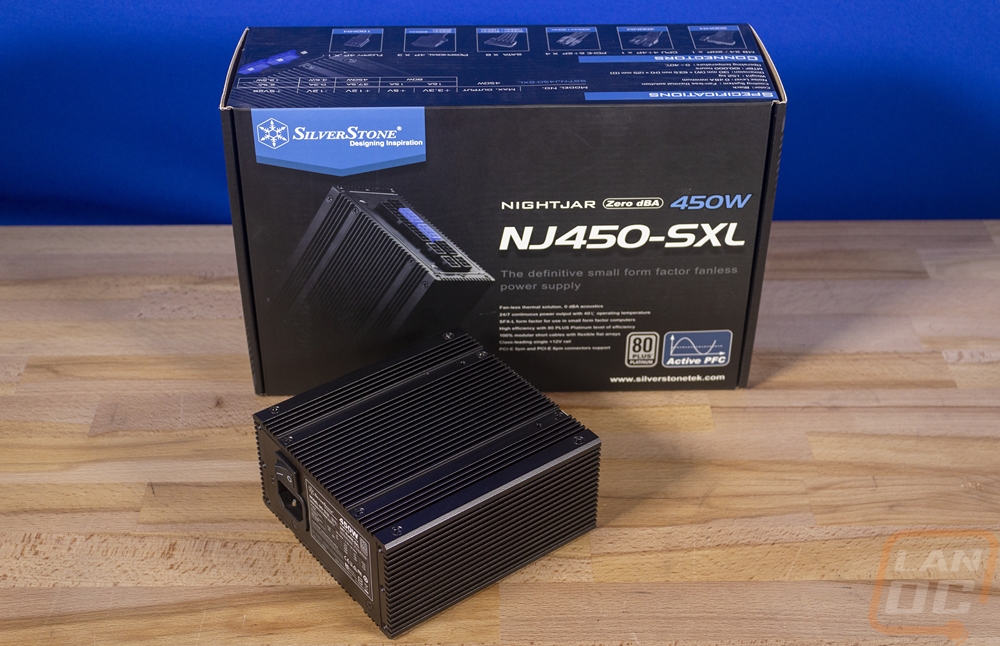 For packaging, the NJ480-SXL is all blacked out with a medium sized photo of the power supply over on the left. Then the model name is in large letters on the right. Above that, they have the wattage and the Nightjar branding which is what Silverstone calls their fanless models. The 80 Plus Platinum badge is prominent and next to that they have all of the NJ450-SXL features all listed. Around back they relist those same features across another 10 languages. Up top, they show the efficiency graph and photos of the flat cables and modular connections. 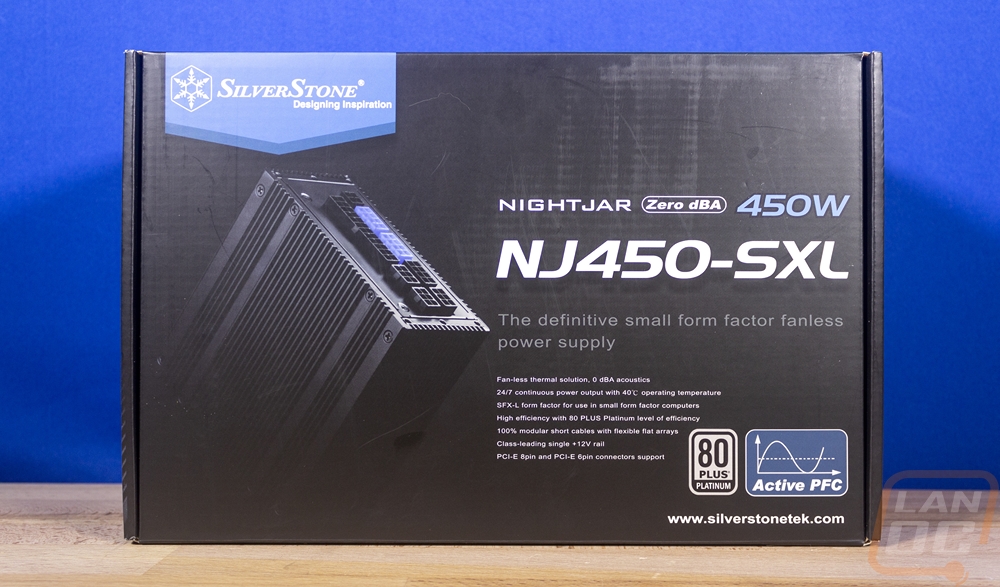 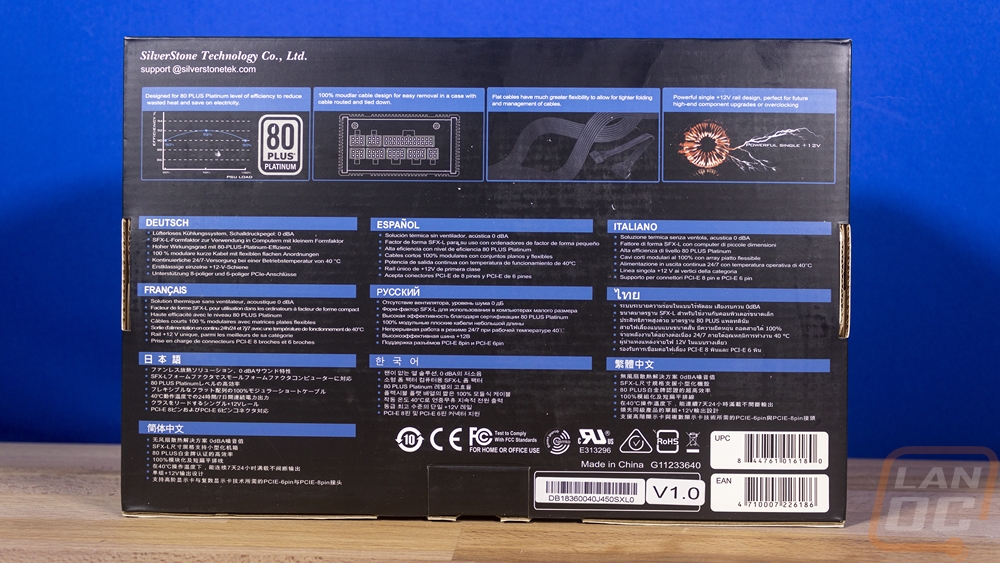 Down along the bottom edge of the box Silverstone also included a small specification list that includes the wattage/amperage breakdown and dimensions. There is also a connectors breakdown with photos and the quantity of each connection which is great for people who might not know the names.

Inside right up on top, they have the documentation. The all black book is a standard one that comes with all Silverstone PSUs with general information and then there is a smaller manual specific to the NJ450-SXL. 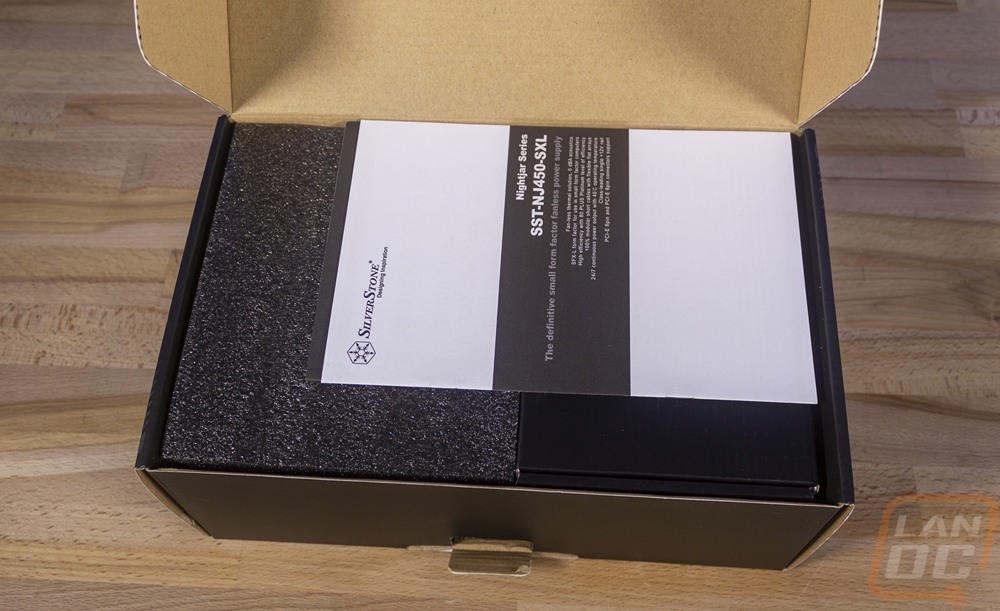 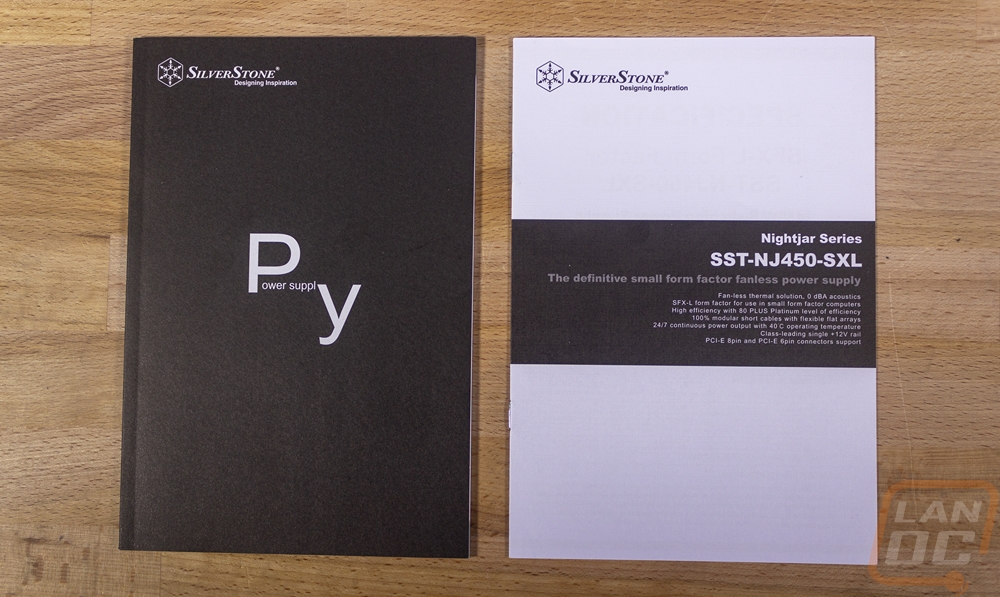 The power supply comes wrapped up in a plastic bag and sitting in a foam tray on its top and bottom. The foam is without a doubt going to keep the NJ450-SXL safe. Besides that, the black box houses all of the modular cables. Also in there is the power cable, four black mounting screws, and a small Molex to floppy power adapter. 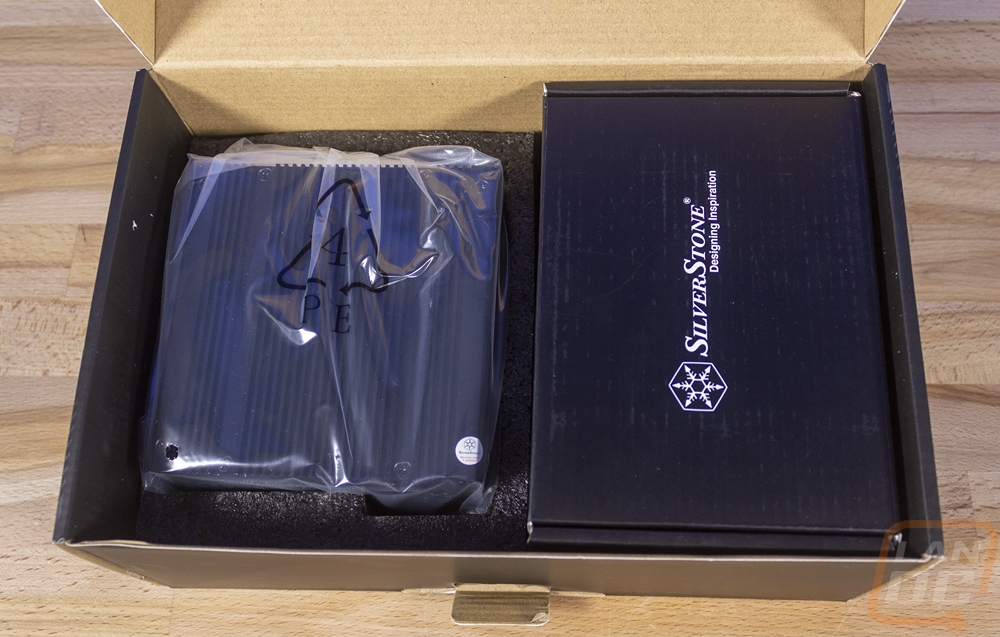 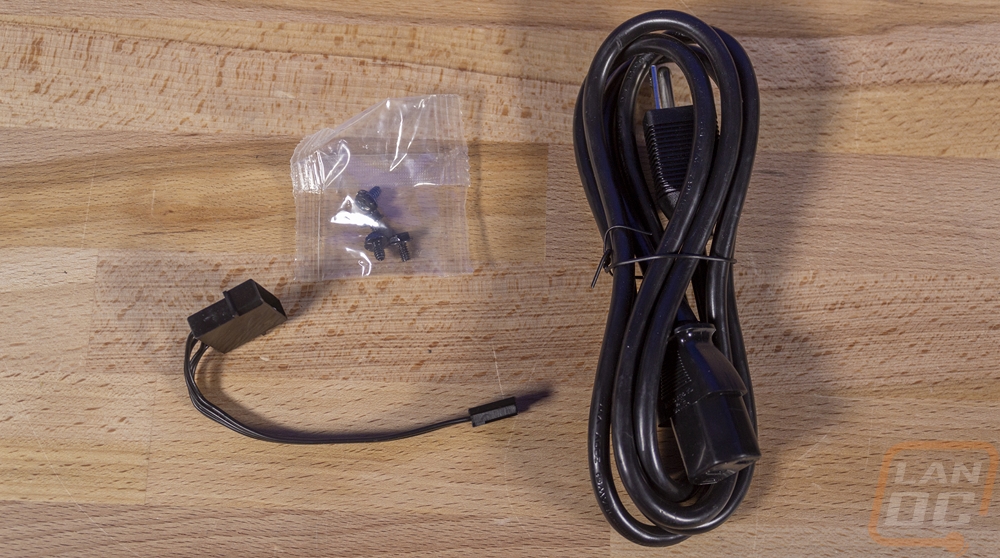 So if you haven’t seen an SFX sized power supply before they are significantly smaller than a normal ATX power supply in all three dimensions. You can find them in two sizes as well, the original SFX size and what most companies call the SFX-L which is similar but longer with matching width and depth dimensions. The NJ450-SXL falls into the SFX-L size with its 125 mm width 130mm depth and 63.5 mm height. SFX-L isn’t supported by all SFX cases but it has been used in the past for the higher wattage models and sometimes to fit a much larger fan to keep the noise down. In the case of the NJ450-SXL, it isn’t the fan because there isn’t a fan and it isn’t wattage because the 450-watt rating isn’t all that high. Silverstone needed the space to keep temperatures down with the aluminum extruded casing which acts as a heatsink. 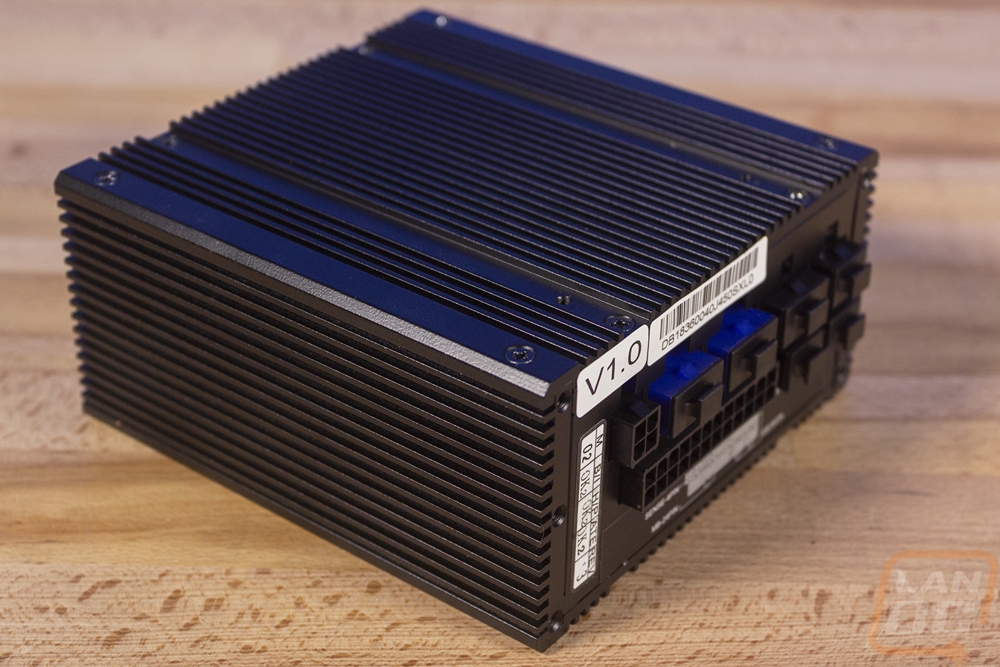 So without a fan, the top and bottom of the NJ450-SXL look exactly the same with the aluminum extruded case putting a lot of fins on both sides so that no matter how this is mounted it will get airflow across them. One side has a small sticker over one of the mounting screws but overall you can see the 8 screws holding both panels on. There are two wider groves for four of the screws and then at the top and bottom a wide flat area that isn’t grooved at all for the other four. 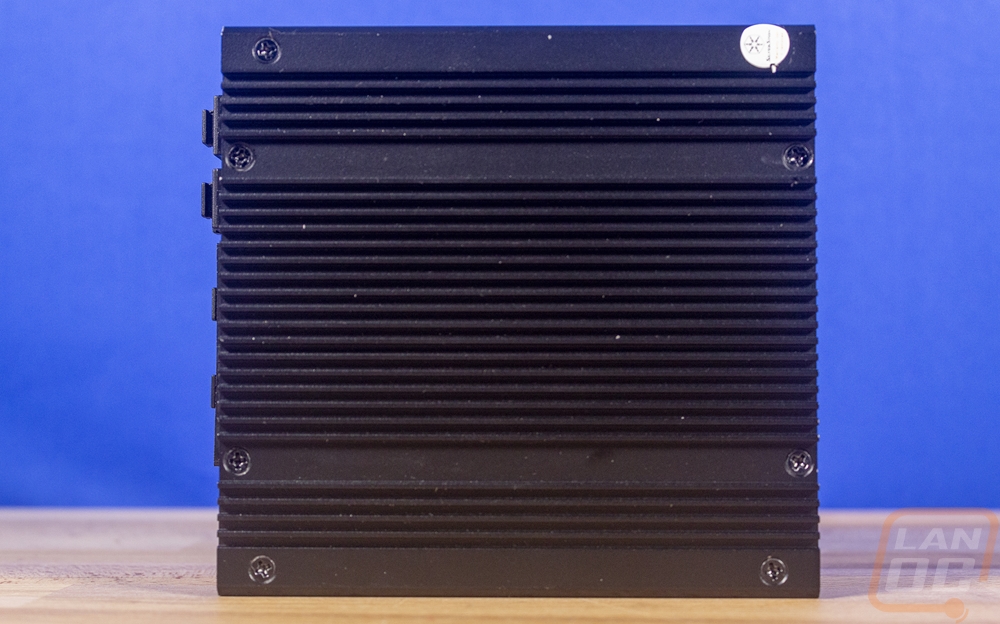 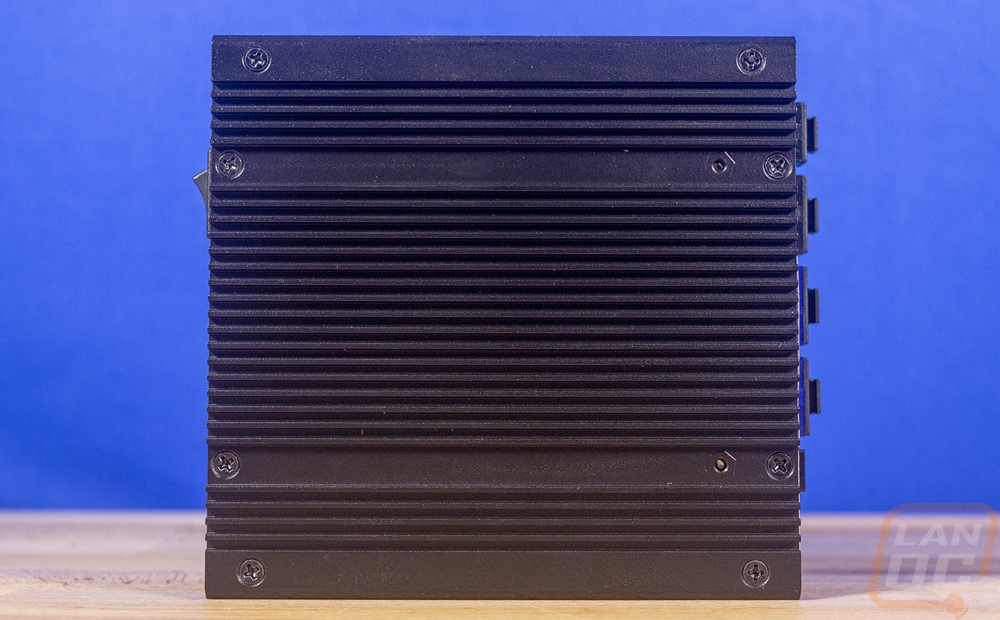 It’s a little boring because the NJ450-SXL is basically a box with a thin aluminum heatsink all around it but both sides have the same extruded aluminum with groves in it as well. They don’t have any exposed screws though, the outside screws on the top and bottom panels are what hold the sides on. Everything is anodized in black for that standard power supply look.

Okay, finally a panel that isn’t just covered in the extruded heatsink! This end of the NJ450-SXL is what would face out in cases that mount the power supply with the power cable exposed. A lot of the SFF cases, however, will even hide this end inside. Anyhow Silverstone took advantage of this space to slip a sticker on with the model name, wattage, DC output breakdown, and all of the required certification logos. Normally this would go on the top opposite of the fan but the extruded heatsink casing doesn’t allow room for it. Also on this end is a power switch and power plug. This view also gives us a good look at the depth of the extrusions, the top and bottom aren’t as thick but the sides have a lot more surface area with the fins. Those thick sides are also where Silverstone has slipped in the six mounting holes that give a few different mounting options.

The inside facing end of the NJ4540-SXL is where you will find all of the modular cable connections. To keep things simple they have a sticker with labels for all of the plugs just below them but a few of the plugs like the 24-pin and the two blue plugs for the PCIe cables will be easy to spot even without the labels. The four pin connection up in the top left is the Sense connection which is paired up with the 24-pin motherboard power. They use this to sense the voltage output at the 24 pin to improve voltage regulation. The one 8-pin that isn’t blue is for the EPS or CPU power and then the three 6-pin connections are all for the accessory SATA and Molex cables. You can kind of get a feel for the overall SFX size when you notice how much room a relatively basic amount of connections fills up the back. Especially with the actual size of the PSU being smaller to fit the heatsink around it.

For cabling, Silverstone shipped everything in a reusable box that you can store any extra cables in. All of the cables use the flat cables which are now basically standard. This design is flexible and thin which is very helpful when doing cable management and fitting cables up under things. These cables are also noticeably shorter than what you would get with a full ATX PSU, you don’t want to have to pack a 24 pin cable long enough for a full sized case into a small case. The 24 pin with its extra 4 pin sense cable is just over 13 inches long and the 8-pin EPS is four inches longer at 17 inches long. Both PCIe cables are the same blue plugs on one end and the other end has two 6+2 connections. The first is at 17 inches and the second has 5 inches of cord from the original plug. This gives you the option to run two independent cables to a video card or just one using both connections and the 6+2 plugs cover both 6 and 8 plug PCIe connections. Then for accessory cables you get three which matches the number of plugs on the NJ450-SXL. All three are just over 28 inches long, one is Molex and two are SATA power. The two SATA cables are the same with four plugs total per cord with the connections at 13, 20, 24, and 28 inches. Then the Molex cable has three plugs total at 13, 20, and 28 inches. 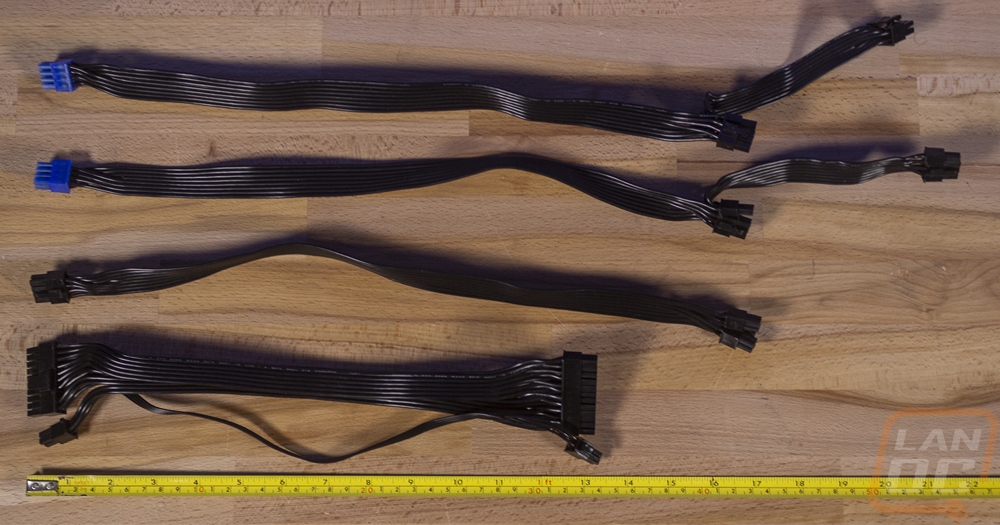 So like I mentioned earlier, we don’t have the equipment on hand for full power supply testing so I don’t provide a pro’s and cons or awards on power supplies because it wouldn’t be fair to do that without fully testing them. With the NJ450-SXL I did, however, do some testing because I was very curious how the thermals work out. To do this I used AIDA64 to load up our test benches CPU and GPU. With the Kill-A-Watt pulling 382 watts I left it running for an hour and a half just to see how it would handle a relatively high load over an extended amount of time. After that, I took a few thermal images and frankly I was surprised that the NJ450-SXL didn’t get warmer than it did, especially with no direct airflow. Our CPU and GPU were running significantly higher. At its hottest, it was averaging 113.9F with 124.9F being the hottest spot I could find. The hot spot was at the end of the PSU where there wasn’t a heatsink. Thermal images showed that the extrusions did a good job of spreading the heat out as well with only one area on one side having a small spot warmer than the rest. The top (in the pictures below) was noticeably cooler as well with its thicker heatsinks. 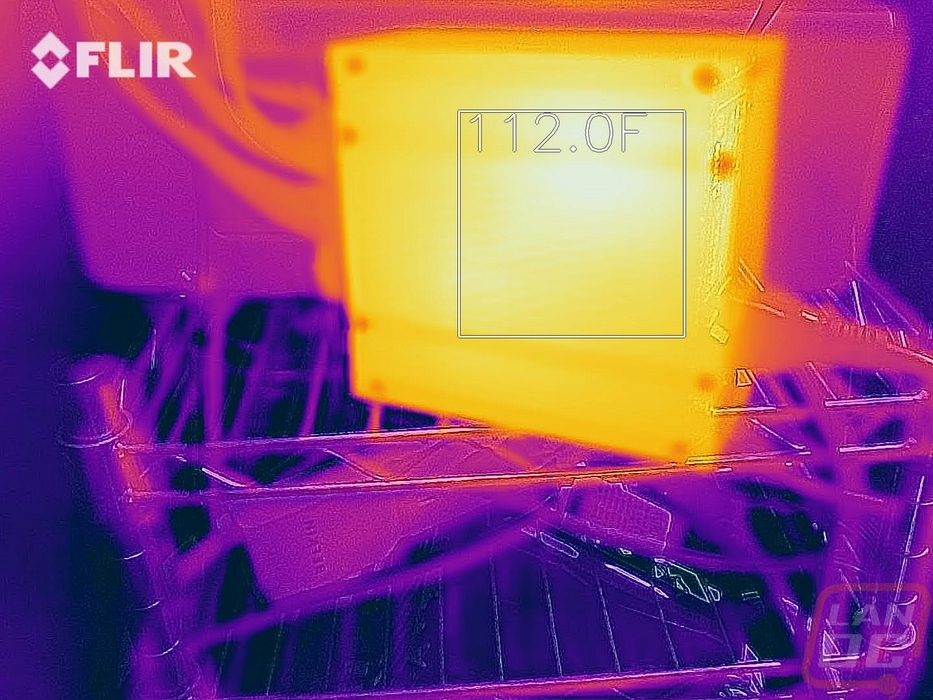 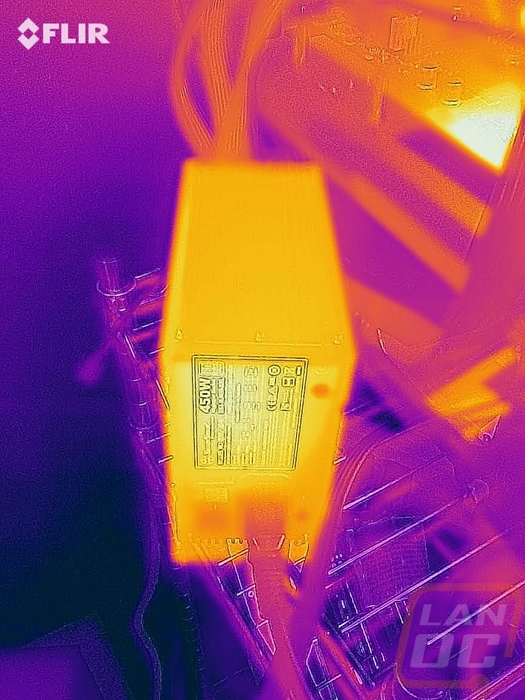 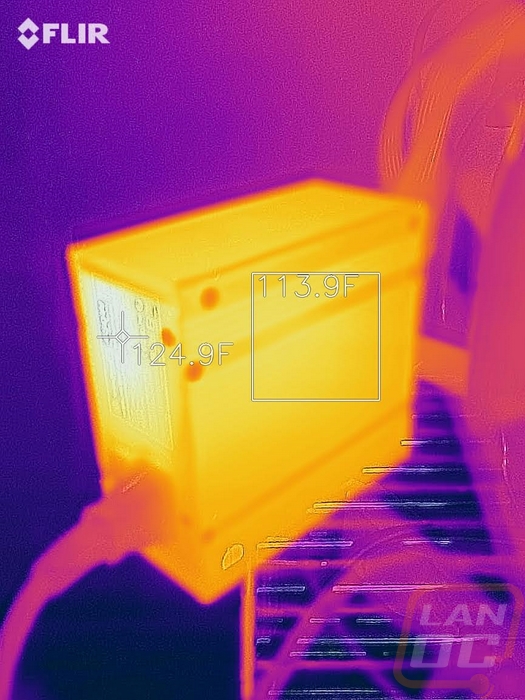 So the NJ450-SXL is a very unique design with this being the only fanless SFX on the market so there isn’t much to be able to compare it too. Even beyond that, there is only one other 450 watt PSU that is 80 PLUS Platinum and that is the Corsair SF450. The price difference between the two is big with the NJ-450-SXL selling for $209 and the SF450 $115. Does that make the NJ450 a bad price? Well if you were only worried about the price going with the fanless SFX PSU isn’t really the most cost-effective purchase. But with SFX builds being used in living rooms or in small builds sitting right up on your desk noise can be a big concern and dropping the fan altogether is a good step in that direction. Keeping the CPU and GPU running cool and quiet are going to be a much bigger issue though in those builds. I think for most people a lot of the SFX PSUs, especially the SFX-L models with larger and quieter fans will be happy, but I love that Silverstone continues to innovate and bring out options in this form factor. The 450 wattage on this one is a nice bonus because most single GPU builds should be able to run on that, in fact, our thermal testing was done with a 9900K and GTX1080.

You might call him obsessed or just a hardcore geek. Wes's obsession with gaming hardware and gadgets isn't anything new, he could be found taking things apart even as a child. When not poking around in PC's he can be found playing League of Legends, Awesomenauts, or Civilization 5 or watching a wide variety of TV shows and Movies. A car guy at heart, the same things that draw him into tweaking cars apply when building good looking fast computers. If you are interested in writing for Wes here at LanOC you can reach out to him directly using our contact form.
Discuss this article
Log in to comment
Posts in discussion: Silverstone NJ450-SXL