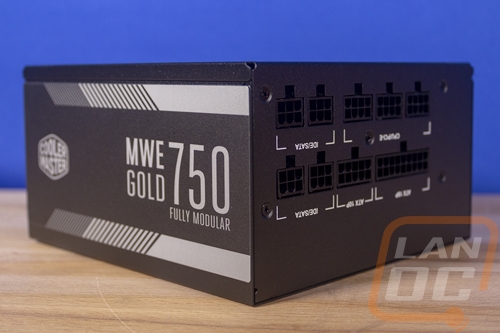 Like I mentioned in the beginning. It would be nice to throw in an 80 Plus Titanium power supply into every build. But the reality of the situation is that would be a big waste of money. They are amazing, but like any other component, it is important to match all of your components together. That means you that if you are going with a mid-range priced build, you don’t really want one or two components being from the high end and everything else being the cheapest possible. That is where power supplies like the Cooler Master MWE Gold 750 come in. They weren’t looking for a budget design, they have an MWE Bronze that can better fit that. You get a good quality 80 Plus Gold power supply, but they don’t throw in extra features that aren’t needed. That means no lighting and no USB connections to monitor voltages or anything like that.

In the end, the MWE Gold 750 ends up having simple, but clean styling. This is because Cooler Master didn’t add any colors to designate the model, they stayed in the black/grey/and white range for a nice color neutral option that should blend in with most builds. I did note though that this only works if your case has a fan down design, if you have to flip the MWE Gold 750 over and face the fan up you will have to look at the label with all of those regulation logos and a bright gold 80 plus logo.

While I didn’t test PSU performance, I did power the PSU up and put it under load to see how the fan performed. It should be noted that the fan profile doesn’t have the fan turning off at lower wattages, but they didn’t toss a cheap fan in either. Cooler Master Silencio fans are solid and run quiet.

They also cut costs by not including a bag or box to store your extra cables in so long term storage of those could be a concern. They even cut out including cable ties, which was crazy to me. They are cheap and you need as many as you can get when doing a new build.

So with the cost-cutting measures and the no-frills design where does the Cooler Master MWE Gold 750 stand in the market? Well, the Fully modular model that I took a look at here has a normal price of $99.99 which is about what it is on Amazon for right now. The non-modular version is a lot cheaper at $67.54 if you are looking for a really good price, but personally, I wouldn’t give up modularity unless I planned on using all of the cables and had no plans to do custom cables later. As for writing this though I saw that Newegg already has this model on sale until Friday (1/25/19) for $89.99. Sorting down to only gold rated, 750 watt, and full modular power supplies there were a few models cheaper. But none of them were from the short list of brands that I would trust. The MWE Gold 750 Fully Modular ends up being a great deal if you want a good sized, gold rated, modular power supply. A perfect PSU to pair with a mid-ranged build.

You might call him obsessed or just a hardcore geek. Wes's obsession with gaming hardware and gadgets isn't anything new, he could be found taking things apart even as a child. When not poking around in PC's he can be found playing League of Legends, Awesomenauts, or Civilization 5 or watching a wide variety of TV shows and Movies. A car guy at heart, the same things that draw him into tweaking cars apply when building good looking fast computers. If you are interested in writing for Wes here at LanOC you can reach out to him directly using our contact form.
Discuss this article
Log in to comment
Posts in discussion: Cooler Master MWE Gold 750 Fully Modular