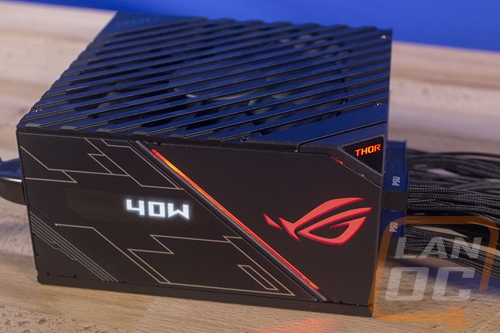 Like I mentioned at the start, this isn’t a full review, just a preview or a look at the features of the Asus Thor. I would never put our full recommendation behind something without being able to completely test it and with power supplies that does require specialized equipment that we do not have. That said every indication is that this is based around the very well reviewed Seasonic Prime Ultra Platinum, only with ROG designed heatsinks inside as well as the obvious exterior changes. So I would keep an eye out for in-depth reviews from sites like Johnny Guru and HardOCP which do test up to that standard as far as the actual performance goes.

Feature wise the Thor lineup is extremely interesting though. Being an 80 plus rated Platinum power supply itself is a huge feature. But Asus tried to improve on that with an exterior screen, addressable RGB lighting, individually sleeved cables, and an ROG styled case. Does it work? Well, I love the look of the power supply, especially the design of the fan grill. But after going over everything I did get tired of just how much branding Asus put on this power supply. I do understand that the ROG brand is a big selling point, but there isn’t an angle that doesn’t have the branding visible in some shape or form. This would have been okay with me if maybe all of the lines on the side were RGB lit but not the ROG logo. Not to mention the logo showing up on the screen when you first put power to it as well.

The screen, well that was the most interesting feature to me going in and I ended up liking having my wattage visible at any time. I was however disappointed in the fan orientation in relation to the screen. There are already a lot of cases covering up the PSU all together making this feature not worth it in some builds, but you also don’t have the option to run the fan on the bottom of a case to pull in fresh air.

While the screen and the lighting got my attention, it was the individually wrapped CableMod cables that were my favorite feature of the power supply. I run CableMod cables on a lot of my builds and always love them, not having to replace the cables at all and still getting that custom look is huge.

So where do the Thor power supplies end up in today's market? Well, aesthetically there really aren’t a lot of companies doing anything in the power supply market. Thermaltake has had the corner on the RGB PSU market for a while now and those really just have RGB fans inside of them. Beyond that what the FSP Hydro with its liquid cooling? But it isn’t really very visible. It's actually a little crazy that no one has pushed to bring out anything interesting in the PSU market, so I can see why Asus made this jump. Visually the Thor does look good and spec wise this is a monster power supply. The screen, well I don’t think everyone will put that to use, or in some cases even be able to see it. But it all really comes down to the pricing.

There were 12 in total and the ROG Thor was the second most expensive of those models. Three are on sale for the next for hours going all the way down to $109 which is crazy for an 80Plus Platinum power supply. But what I was mostly interested in was the Seasonic PRIME Ultra at the same wattage. It is available at $173.39. So all of the ROG styling, the addressable RGB LEDs, ROG cooling, OLED screen, and individually sleeved cables are going to cost you $46.60 over the same model from Seasonic. Is that a good deal? Well, I think that depends on who you ask. Obviously, some people won’t care at all about any of those features. For me, I was curious what a similar individually sleeved kit would cost from CableMod because that was the biggest feature for me. They don’t sell one for the Thor because it already comes with a set, but a basic cable kit from them which only gets you the 24-pin, one CPU, and two PCI cables costs $49.99. The Thor comes with an additional CPU cable for a little less. Just as long as you like black lol.

In other words, this could be a good deal. Even if you aren’t interested in the screen or lighting. But I think most people are going to go with a power supply that costs less and get extension cables. I think Asus has a nice opportunity to bring out a slightly lower range model that sticks with the individually sleeved cables, paired up with an 80Plus gold rated PSU at a better price point that could really light up the market.

You might call him obsessed or just a hardcore geek. Wes's obsession with gaming hardware and gadgets isn't anything new, he could be found taking things apart even as a child. When not poking around in PC's he can be found playing League of Legends, Awesomenauts, or Civilization 5 or watching a wide variety of TV shows and Movies. A car guy at heart, the same things that draw him into tweaking cars apply when building good looking fast computers. If you are interested in writing for Wes here at LanOC you can reach out to him directly using our contact form.
Discuss this article
Log in to comment
Posts in discussion: Asus ROG Thor 850W Platinum