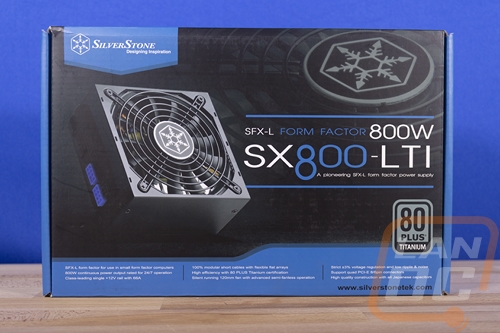 So if this is your first time checking out an SFX or SFX-L power supply you might not know just how small the SX800-LTI is. The fact that it is an SFX-L means it is longer than a normal SFX power supply, this gives is more a normal looking scale so in photos it almost looks like a normal ATX power supply.  Well, it is actually 4.92 inches wide, 5.12 inches deep and 2.5 inches tall. A smaller ATX power supply would be 5.91 square and 3.39 tall for scale so this is much smaller than normal. A normal SFX, on the other hand, would be shorter with a 3.94-inch depth. It’s that size that makes the 800-watt capacity so impressive, the first enthusiast focused SFX power supplies were 450 watts and it wasn’t THAT long ago that even full ATX power supplies were longer when you got up into the 800-watt range. 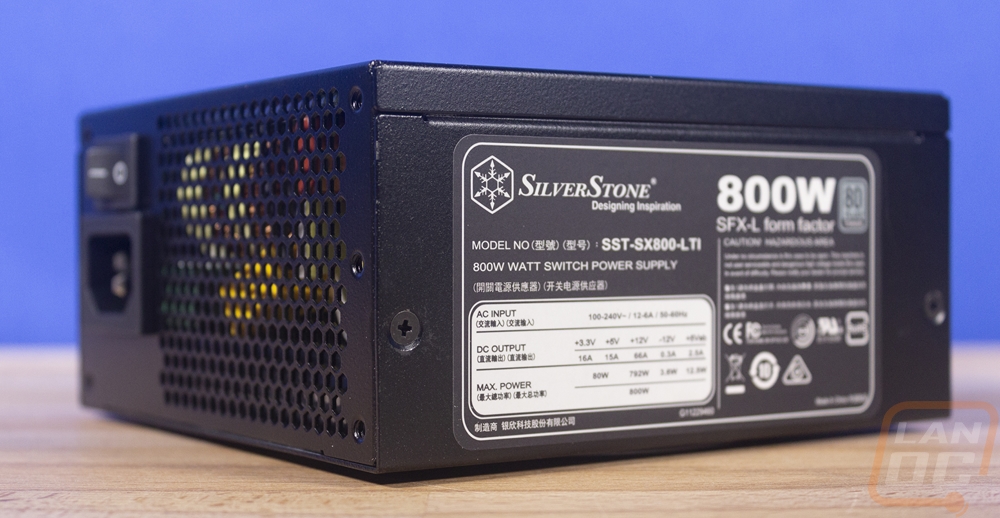 The other big aspect here is obviously that 80 Plus Titanium rating, some of you may not know or care at all about 80 Plus but it basically is a rating of the power supplies efficiency. Originally 13 years ago the first PSUs with an 80 Plus were just coming out and there was just one rating and it meant that the power supply (under 115v power) tested with an 80% efficiency rating at 20%, 50%, and 100% load. 10 years ago they updated this to include additional ratings with the Bronze, Silver, and Gold. Those weren’t pure numbers across the board, they had different requirements depending on the power load. That continued on later as well with the Platinum and Titanium ratings. Here is a breakdown.

So the side profile shots of the SX800-LTI have a few stickers on them. One side has the main sticker with all of the certifications and information on it. It also has the SilverStone branding and the wattage in a larger font but it still isn’t something I would want ultra visible in my build. The other side would be the better choice but it also has a revision sticker, an inspection sticker, and what I assume is a serial number as well not to mention a sticker covering one of the screws to keep you from digging inside. 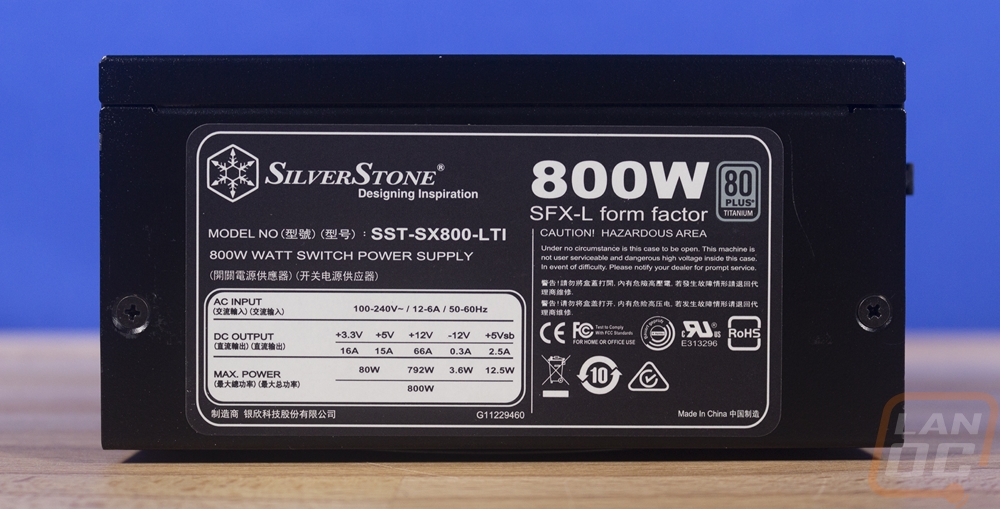 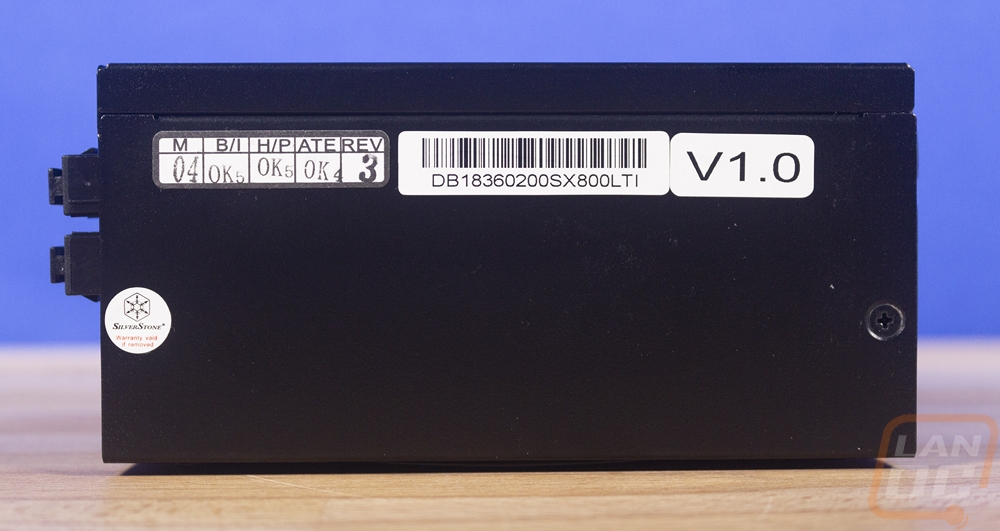 The inside facing end is really the workhorse end of this power supply. They packed it full of modular connections with plastic caps in all but the 4 pin and 20 pin connections that make up the 24 pin cable. The modular connections do stick out a little so keep that in mind but I do like how SilverStone has gone out of their way to make sure everything is labeled. There is a sticker at the bottom with all of the legends on it then in addition to that the PCI-E plugs are also color-coded blue on both the PSU and the cable to keep people from trying to force the EPS cable into them or the wrong end of the cable. 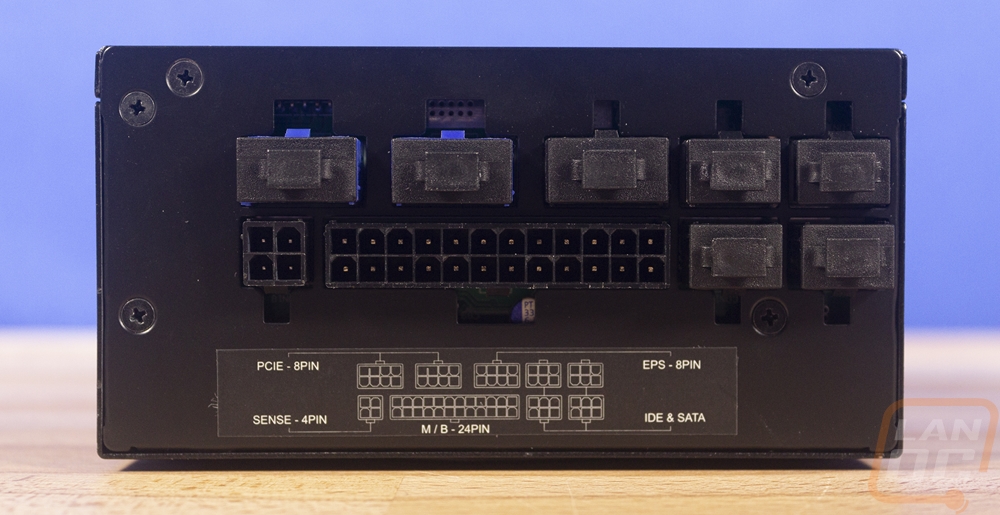 The outside facing end does have some ventilation to help the 120mm fan but they did still have to fit the power plug and an on and off switch so the exhaust hole is much smaller than the intake fans hole. The back has six screw holes for mounting, typically it is just the four in the corners that are used on SFX though. Speaking of, I was disappointed that SilverStone didn’t include an SFX to ATX adapter bracket like they used to. The expectation is to use this in an SFX case, but I think I have used SFX power supplies in ATX power supply locations more often than not to open up additional room in small form factor builds. In fact, that is the plan with this PSU as well and currently, the SilverStone adapter plate is almost $11 on Amazon right now. I may make my own lol. 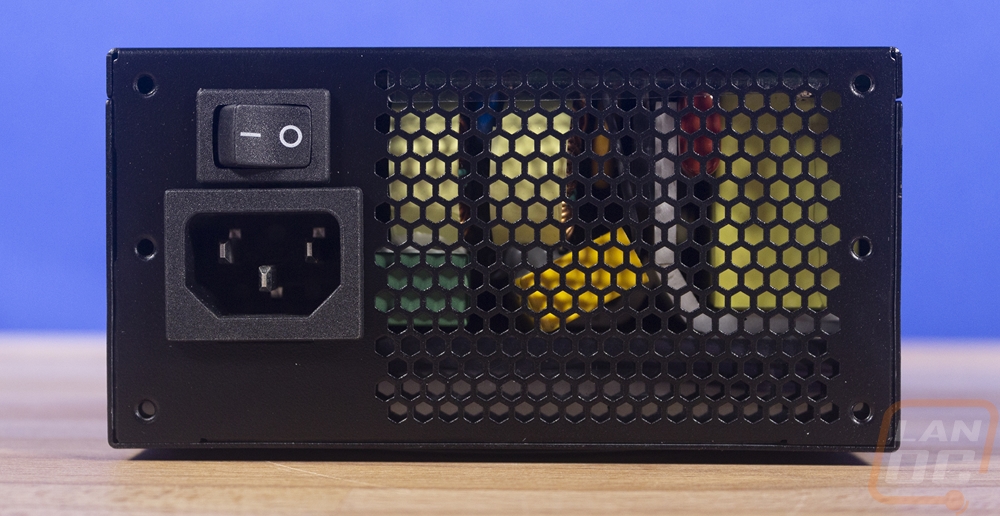 As for the top and bottom. Well the top of the SX800-LTI is all black and just has the SilverStone logo stamped into it at 45 degrees. Then on the other side, you can see just how tight it is to pack a 120mm fan into a 125mm x 130mm PSU. The fan takes up every possible square mm of this side with just the corners with any meat on them and that is only to be able to mount the fan and fan grill. The fan is a thin design with 13 fan blades. Covering it is a traditional wire circles grill with a larger black and chrome SilverStone snowflake logo in the center. 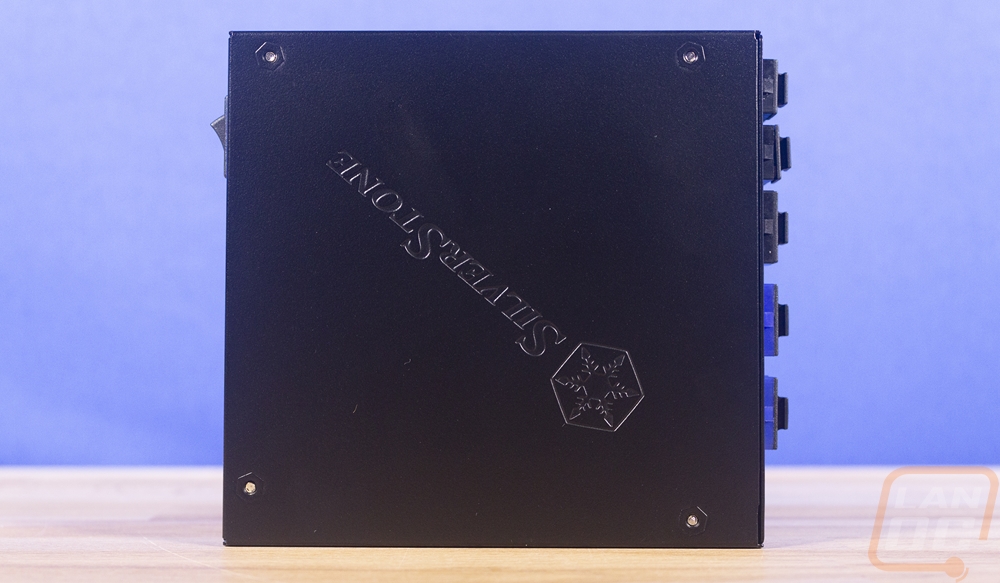 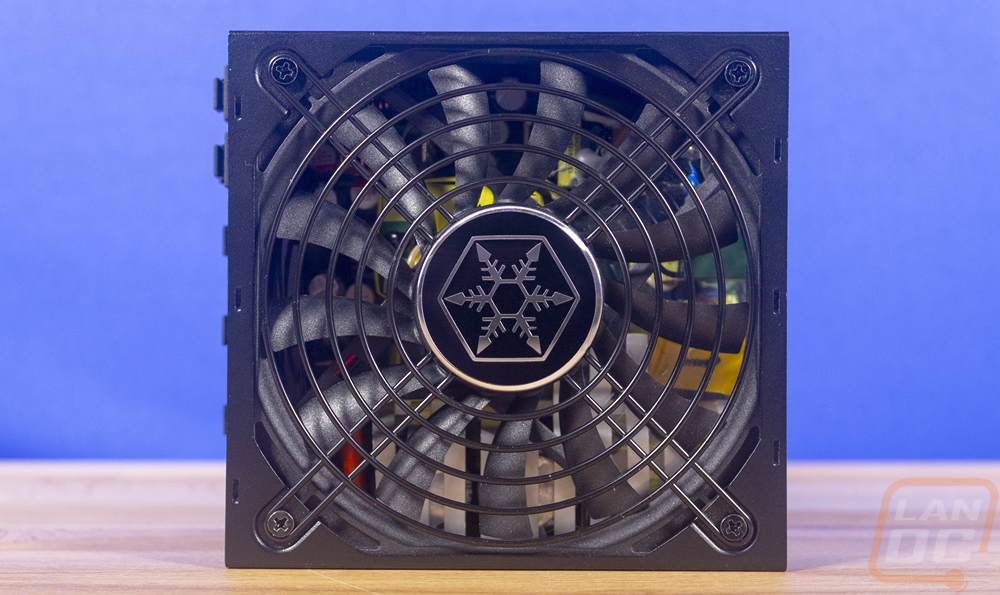 So I pulled everything out of the cable box and what you get is one large bundle of cables with a long twist tie. There is also a single small cord that is an adapter from Molex to a very old floppy drive connection. I see this being included a lot but haven’t used one in 10 or more years, I would have rather that money be put into a cable bag or an SFX/ATX adapter plate. The power cord is also included obviously then you get a small baggie with four black screws to mount the SX800-LTI. 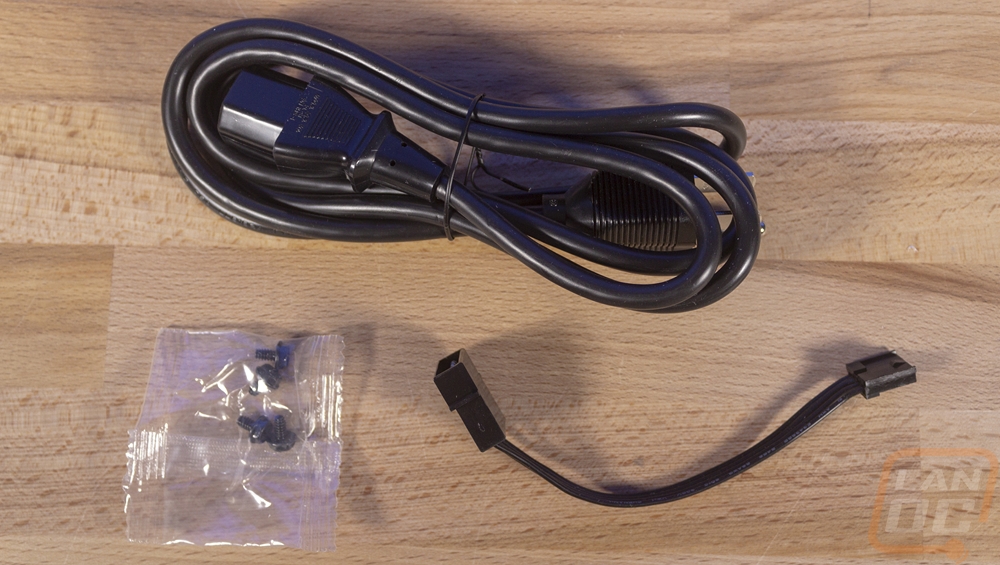 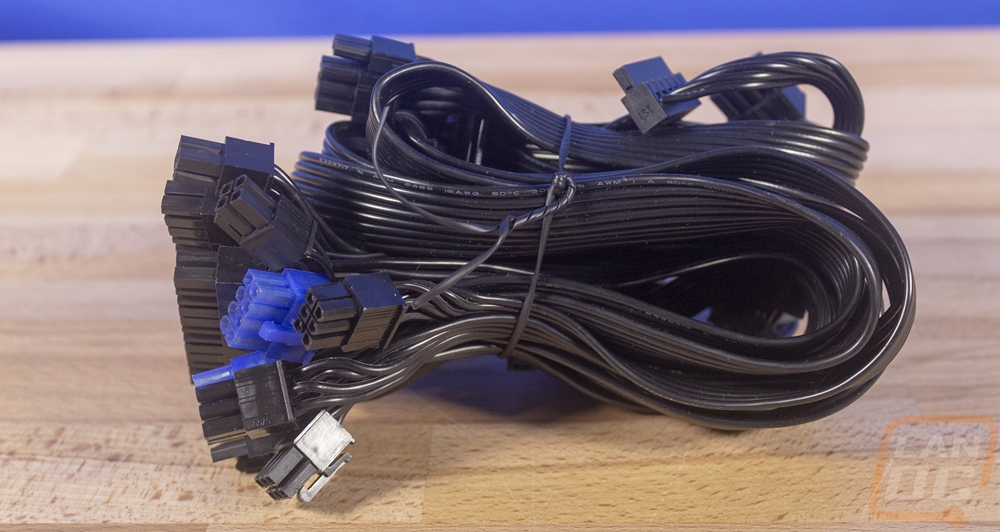 So as expected, with an SFX power supply, the cables are a little shorter than normal but this was mostly just with the 24 pin cable and the 8 pin EPS cable. The EPS is a little longer than the 24 pin thankfully as that normally has to reach the far side of the board. The PCI-E cables were interesting as well. Specifically one of them is much shorter than the other and I love that people with just one video card have the option to run a shorter cord. Both PCI-E cables are dual connection cables, so they plug in with one 8-pin into the PSU but they have two 6 or 8 pin connections. This should support most video cards as most need no more than two 8-pins but if you have a weird card that requires three you will only be able to run one card but that should be okay with most people, SLI and Crossfire is really overrated IMO. Then for accessories cables, well you get a lot of options. There are four cables and they are all nearly the same length. Three are SATA cables and they all have four SATA connections and the last is a Molex cable with three Molex connections.

Now all of the cables included with the SX800-LTI are of the flexible type. I personally love the cable type for every cable except the 24-pin. They are thin and can be tucked away easy and because they are so flexible they can be bundled up tightly when you have too much cable. The SATA cables have a side benefit in that you can trip off the extra connections if you only need one or two and then you can transfer the connection punch down cap over to the last plug to cover it all up. Of course, that will void your warranty and you have to know what you are doing, but it is a little-known benefit to this style of cable. My problem with the use of it with the 24 pin is that no one makes a nice 12 cable wide version of the flex cable that could be doubled up for a nice and tight 24 pin cable. They end up using a bundle of four 6 wire cables and then an extra few for the 4 pin addon and it is a mess. For this, a nice 24 pin cable with individually sleeved cables would look much better and honestly be easier to work with in some ways. 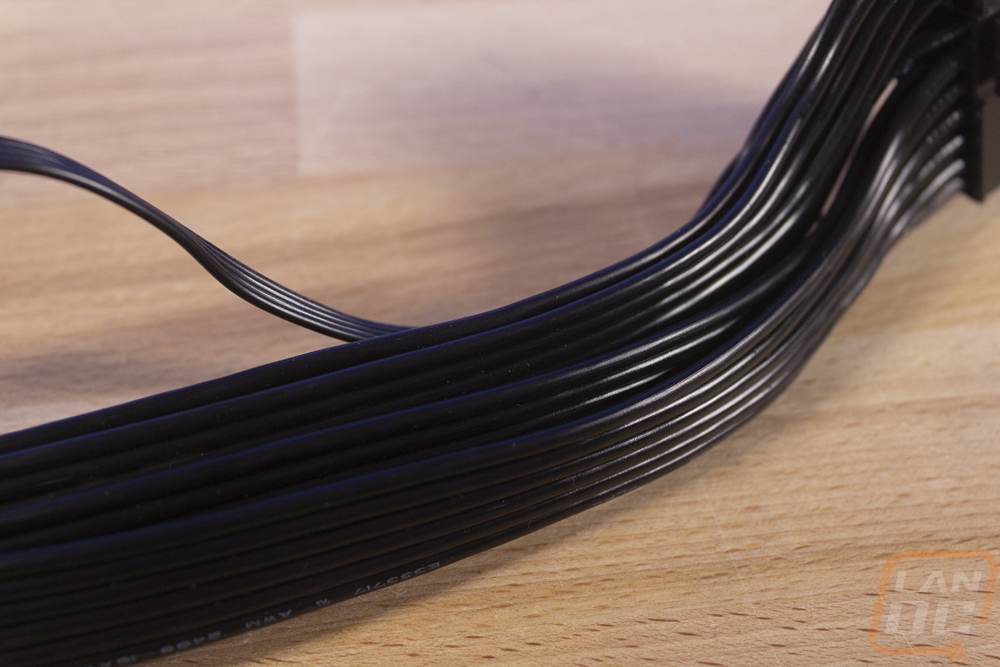