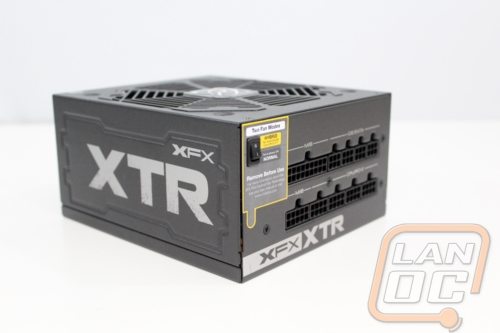 When I think of XFX their video cards are the first thing to come to mind. But they have actually been in the power supply market for a long time now. They have done a good job of standing out in a very crowded market by coming up with unique PSU casing designs when most of the market has just done the same thing over and over. Today is actually the first time I have had an XFX power supply in the office to check out. We don’t technically review them (read more to see why), but today I’m going to take a quick peak at the new XFX XTR 650 watt to see what sets it apart from the competition.

The XTR 650’s box has a zoomed in photo of the fan grill on the PSU on the front. There is also a smaller image that shows off the full modular cables as well. Together they do a good job of showing what the XTR is all about without overloading you with too much. Beyond that there are a few notes up along that top that show that this power supply supports Haswell CPUs, SLI and Crossfire, and has its 80 Plus Gold certification. On the back there is a photo that shows the entire power supply this time around. Along with that they have a few short sections talking about the power supplies efficiency and that XFX tests their power supplies at 50 degrees Celsius rather than the 24 degrees that some manufactures test at. This means you should get the rated wattage or more under normal conditions. 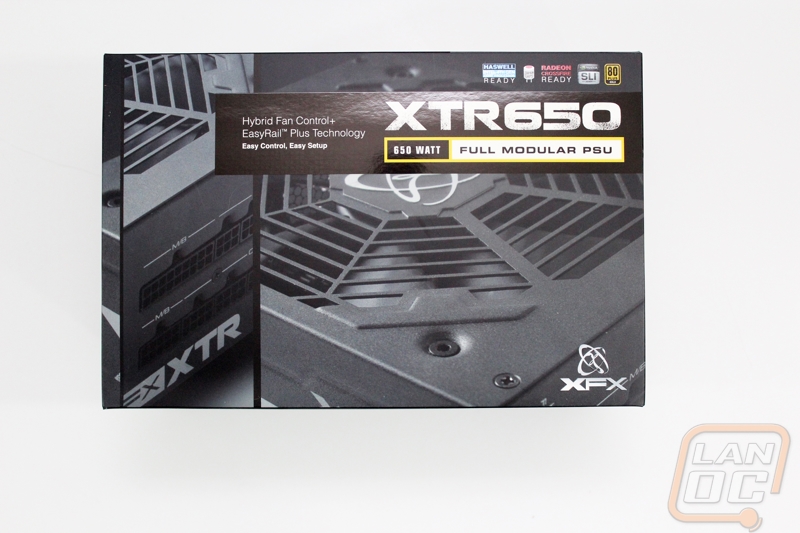 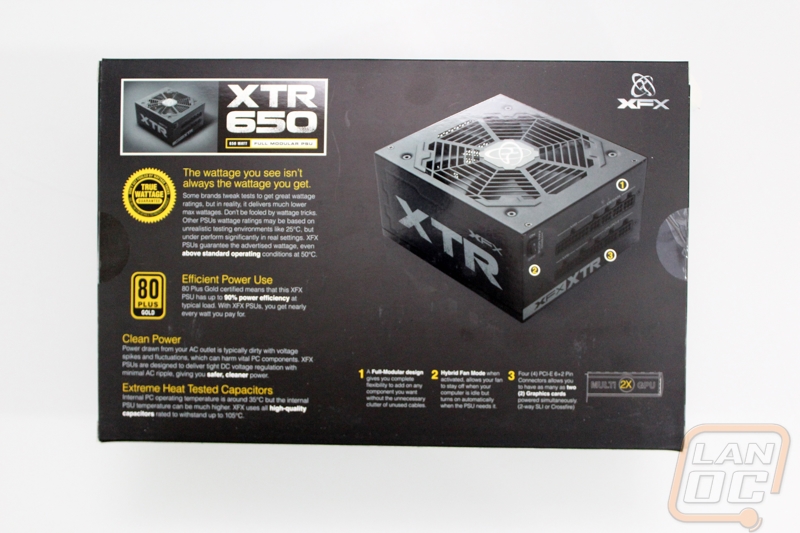 Inside when you open up the box you will find another box right on top with the XFX Pro Series logo on it. This box contains all of your modular cables as well as a small pack of screws for mounting the XTR. With this being a black PSU I would have preferred if the included screws were black as well, but it’s only a small complaint. For documentation XFX did include a small user manual as well. Under the cables the power supply is in a bubble wrap bag and then placed inside of heavy foam padding to keep it safe. On the end of the box, under the foam there is a small compartment where you will find the heavy gauge power cable for the XTR. 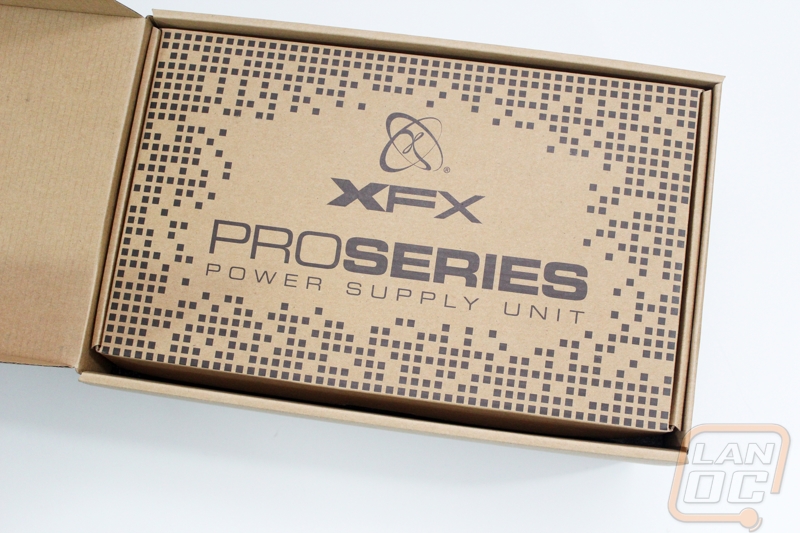 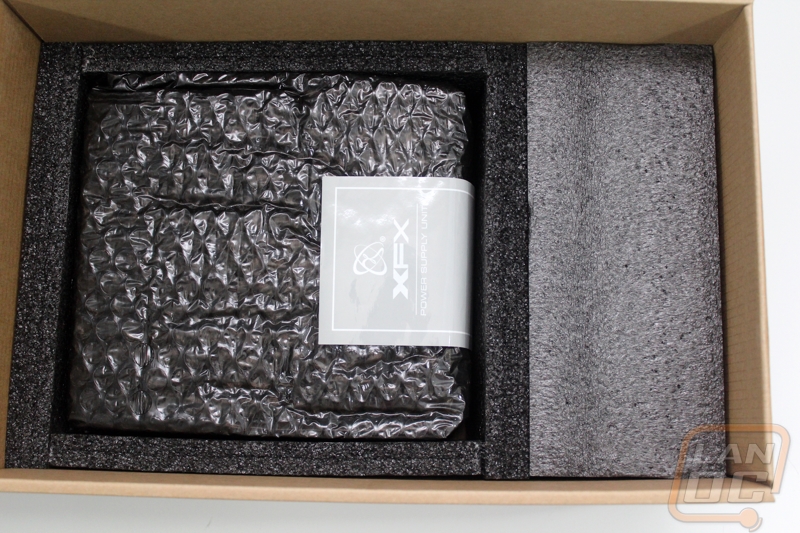 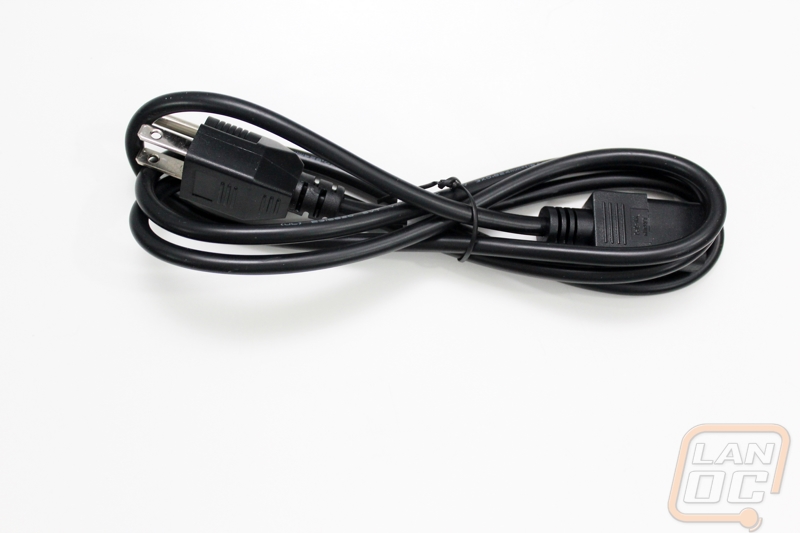 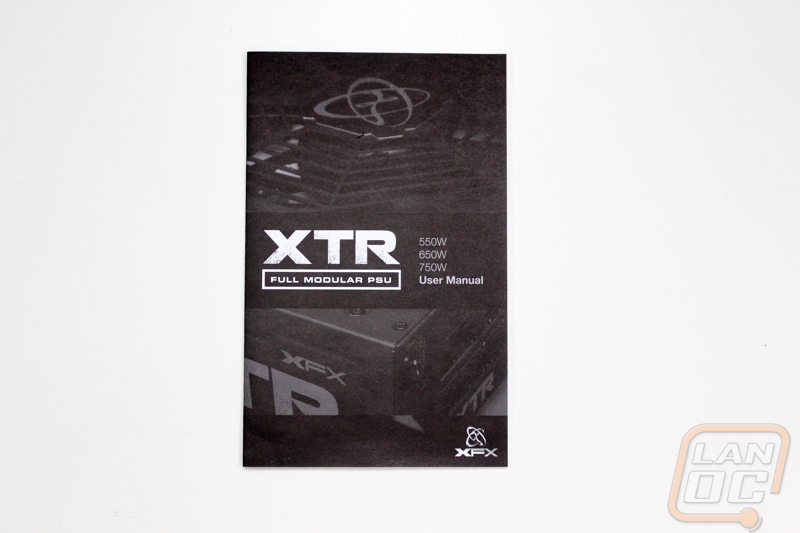 The exterior of the XTR has a rough black finish like most other power supplies. On both sides there is a large silver XTR logo with a little aged look to them. The logo is flipped on one side so no matter how you have the power supply installed it will show properly, a nice touch! Up on top there is another aged XTR logo as well as the power supplies 650 wattage rating in a large font. Also on the top of the XTR is the power breakdown of how much wattage each rail handles. 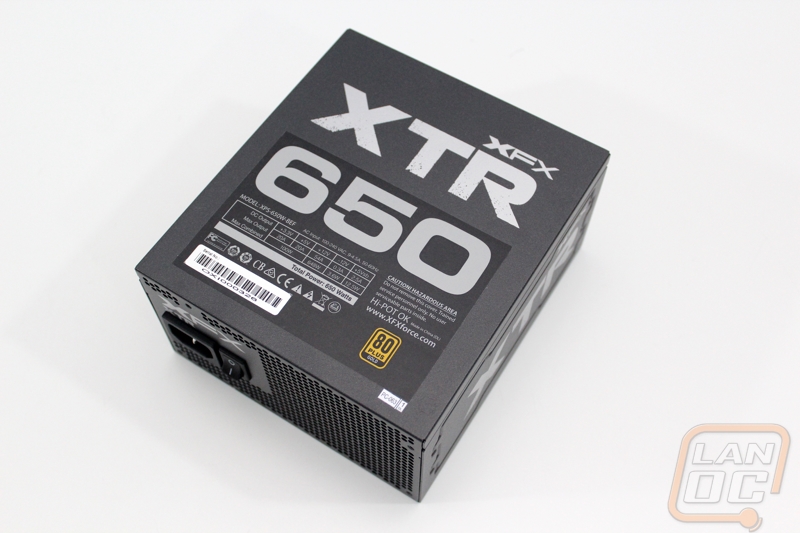 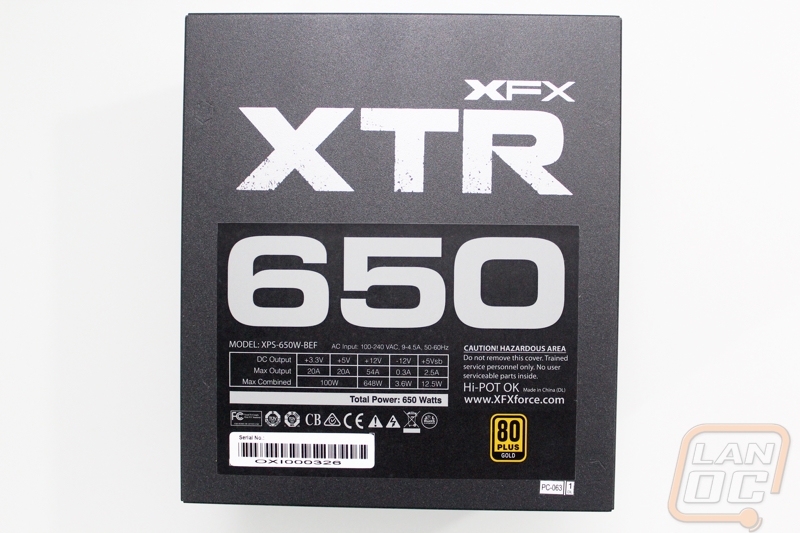 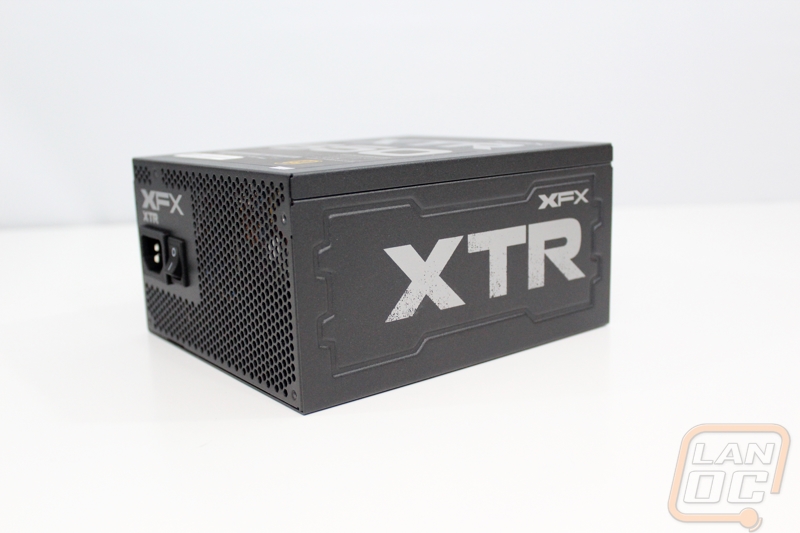 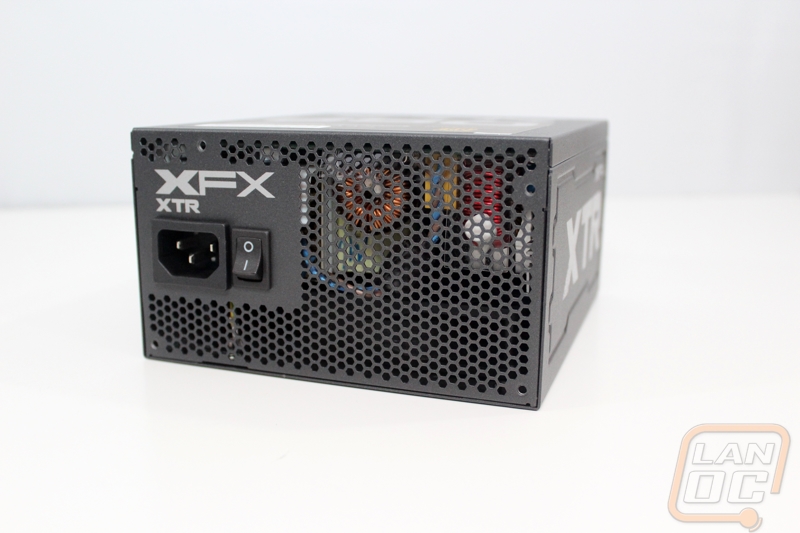 For cooling XFX went with a 135mm fan but what really sets it apart is the hexagon shaped fan grill. The grill really gives the power supply a little style without using bright colors or lighting to get your attention. In the middle of the fan is the XFX logo. It’s really a shame that in most situations the fan grill will be facing the bottom of the case and not visible. 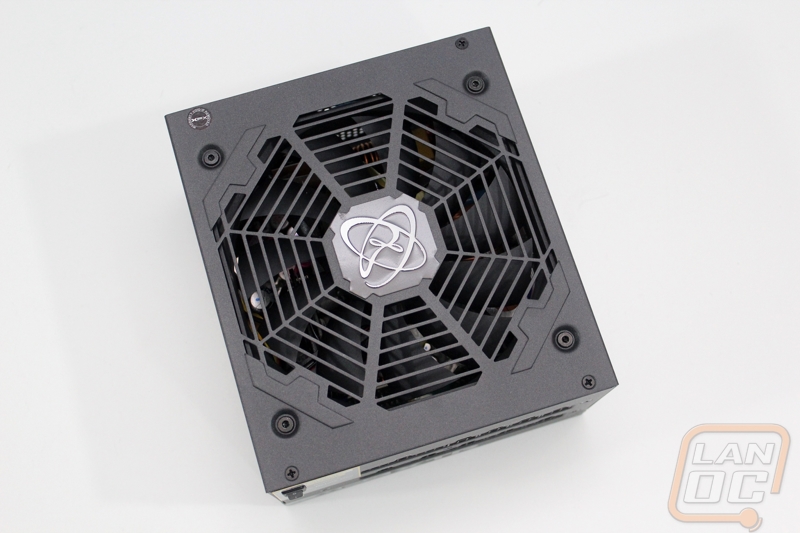 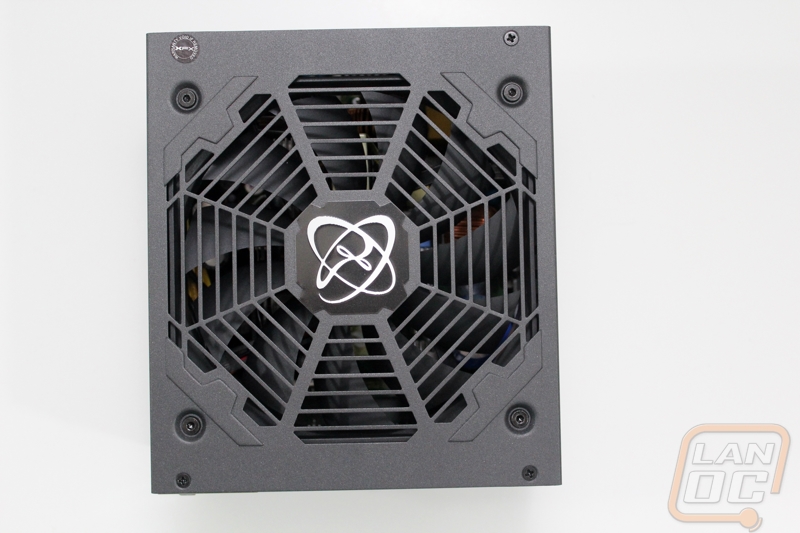 Beyond the XTRs unique styling, one of the biggest features that it has to help it stand out from a crowd is it fan mode switch. The switch itself is just a small switch on that inside of your case on the same side of the power supply as its modular cable connections. What it does is what is important though. When you flip the switch up it turns on what XFX calls their Hybrid Fan Technology. Normally under low power loads (20% load or 25 degrees Celsius) a power supply fan will turn down, with Hybrid Fan Technology turned on the fan in the XTR will actually turn all the way off. This saves you a tiny bit more electricity in those situations but more importantly it will cut noise down even more.

My initial though was why would you even need a switch for this, why not just run this all of the time. But after thinking about it, I am glad that XFX gave us the option. You see, in some small cases their might only be one case fan. In those situations the power supply fan sometimes pulls double duty by helping with case air flow as well. If you ran hybrid mode in a case like that you do risk things heating up when the fan shuts off. Having explained all of that, in most situations I think you should keep this mode turned on. The lower power usage, silent operation, and even extending the life of the fan are all good reasons to stick with it. 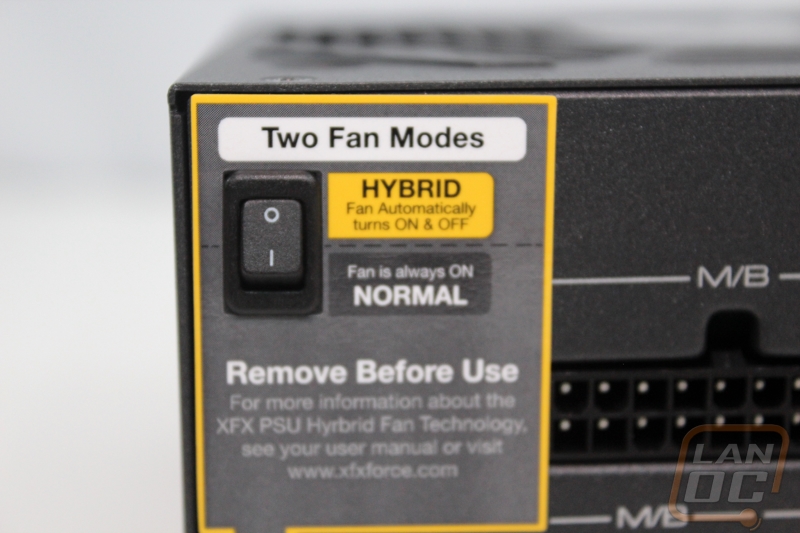 In a lot of situations when someone says they have a modular power supply, the chances of it actually being FULL modular are very slim. Technically most power supplies are actually only partial modular. That means that their 24 pin and 8 pin CPU cables are typically hard wired while the rest of the cabling is modular. Most manufactures do this to save money because let’s be honest how often are you going to not need to use the 24 pin power cable. As it turns out there are a few situations where this does come in handy, I ran into a few of them on our project build “Fridge” a while back. In that build we went completely crazy with every aspect of the build including the power supplies. We went with two 1200 watt power supplies to power the 4 XFX HD 7970’s alongside of the dual 8 core CPUs. Having full modular power supplies worked out really well in this situation. When running two power supplies its nice to not have to hide the second 24 pin cable that won’t be needed. On top of that having full modular cables makes it easier to redo the sleeving to customize your PC. 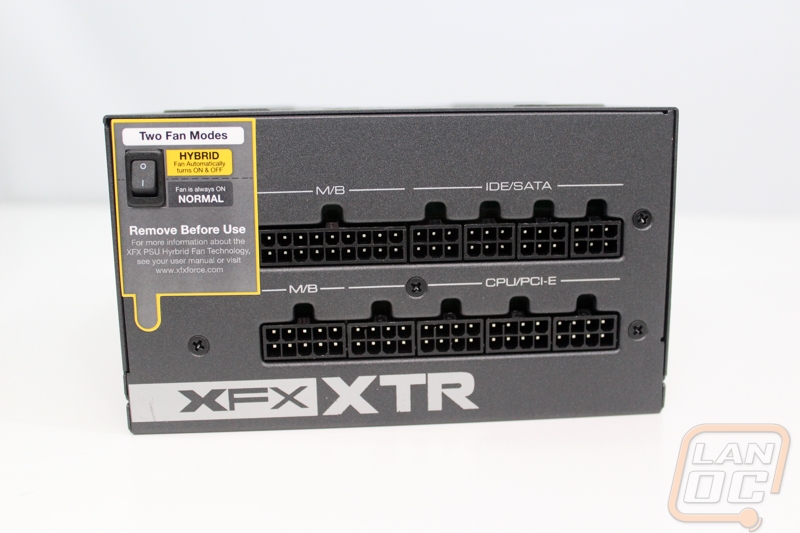 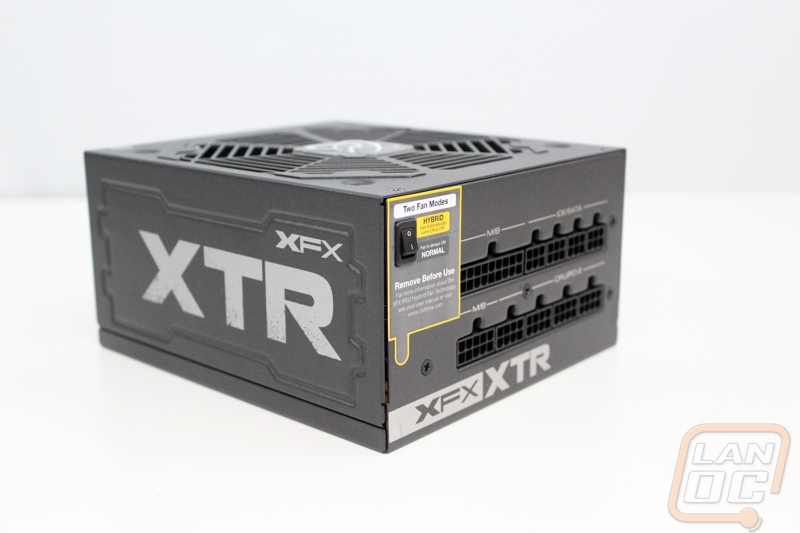 All of the cables other than the 24 pin cable use a thin and flexible wire design that makes routing cables behind the motherboard tray easy, even on tight PCs. For cables you get the one 24 pin motherboard cable as well as two 8 pin CPU cables. One of the CPU cables is a full 8 pin while the other is a 4+4 design that will work with PCs that require a 4 pin or 8 pin connections. For peripheral cables you get three SATA power cables and two Molex style power cables. This will give you a maximum of 10 SATA connections and 6 Molex. XFX also slipped in a floppy power connection, on the off chance anyone still uses a floppy disc drive. For PCI cables you get two, each has two 6+2 connections each, I love the double plug design because you end up with fewer cables to route when hooking up video cards with two connections. 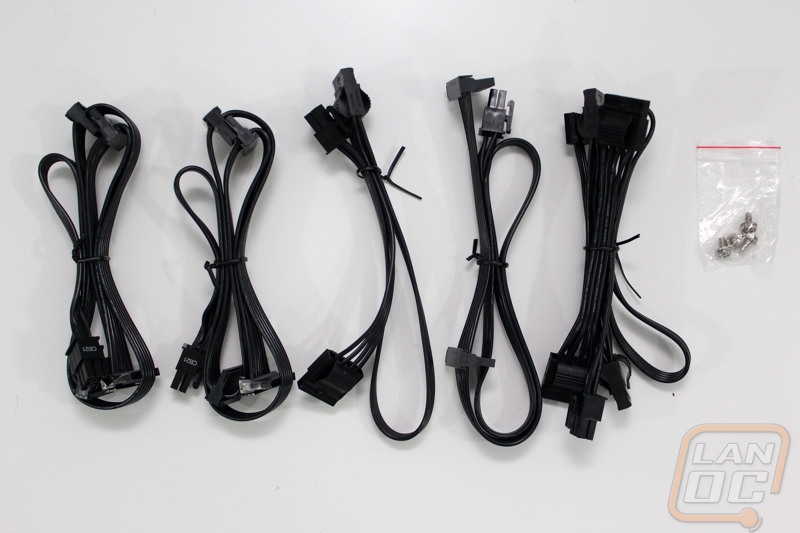 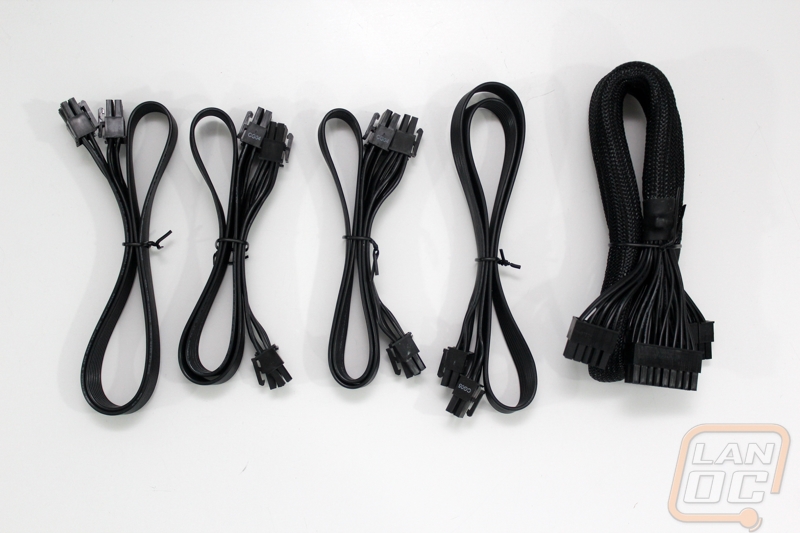 Without benchmarking the XTR I can’t in good faith talk about the XTRs performance or possible reliability. Even so, I really do like the XTR. XFX did a great job of mixing a clean look with a little XFX styling with their unique fan grills. The XTR is a premium PSU and XFX didn’t skimp on its features. You get a certified 80 Plus Gold PSU meaning it has a high power efficiency and XFX went all out, even including a full modular design. When I think of XFX I think of gaming and gamers typically don’t care too much about noise. So it was a little unexpected for the XTR to focus on noise with its fan mode switch. With that said I loved that they included it, as a gamer that is getting older every day I have been more and more concerned with noise in my gaming rig. Having the option to be able to turn the fan off when not under heavy load should help me keep my sanity when browsing the internet. All in all I really like the XTR, XFX went above and beyond the standard PSU with a little styling and a few premium features. I would keep it on my short list of power supplies to check out on my next build.

You might call him obsessed or just a hardcore geek. Wes's obsession with gaming hardware and gadgets isn't anything new, he could be found taking things apart even as a child. When not poking around in PC's he can be found playing League of Legends, Awesomenauts, or Civilization 5 or watching a wide variety of TV shows and Movies. A car guy at heart, the same things that draw him into tweaking cars apply when building good looking fast computers. If you are interested in writing for Wes here at LanOC you can reach out to him directly using our contact form.
Discuss this article
Log in to comment
Posts in discussion: XFX XTR 650W PSU

We have 508 guests and one member online