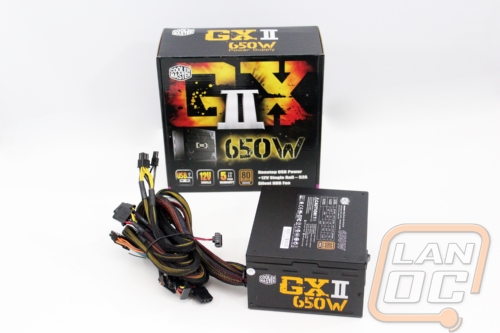 Cooler Master offers a wide variety of power supply solutions, and understanding the multitude of series and product families can be a bit daunting. The units essentially break down into four main categories, gaming being an intermediate solution between enthusiast and entry-level units. The GX, or “Game Xtreme”, line of power supplies have recently been re-introduced with a few improvements that blur the lines between enthusiast, gamer, and their self-entitled silent demographics while continuing to pay mind to budgets of a crowd torn between a software library and the hardware required to support it. Today we have the 650W version of the new GXII PSU family, and we’ll take a look at what new offerings it brings to the table.

**Disclaimer**
LanOC Reviews only covers the features of power supplies due to not having the equipment to test them up to our standards. Because of this you will not see a performance section, a final verdict, or awards. Therefore we prefer to call this a preview rather than a review. Thank you for understanding; we keep our standard to the absolute highest for you, our reader.


Packaging
Cooler Master’s design scheme for the GX series easily differentiates itself from their standard white and purple accent packaging with militaristic font types and explosions of course. I felt as though I was opening a box of fireworks. Otherwise some useful information can be found around the box faces, including a nice graphic table of the connectors available on the rail. Inside you’ll find the GXII cushioned between its own cabling and a power cord, mounting screws hiding below, and topped with a reference leaflet. 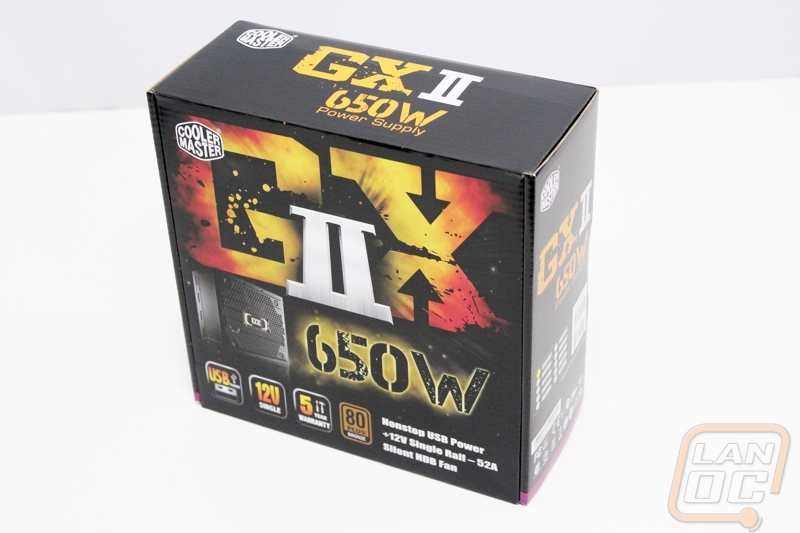 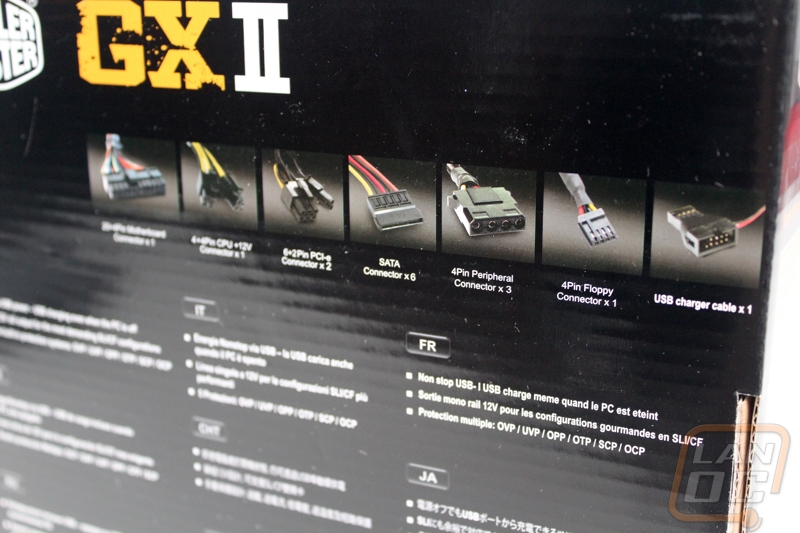 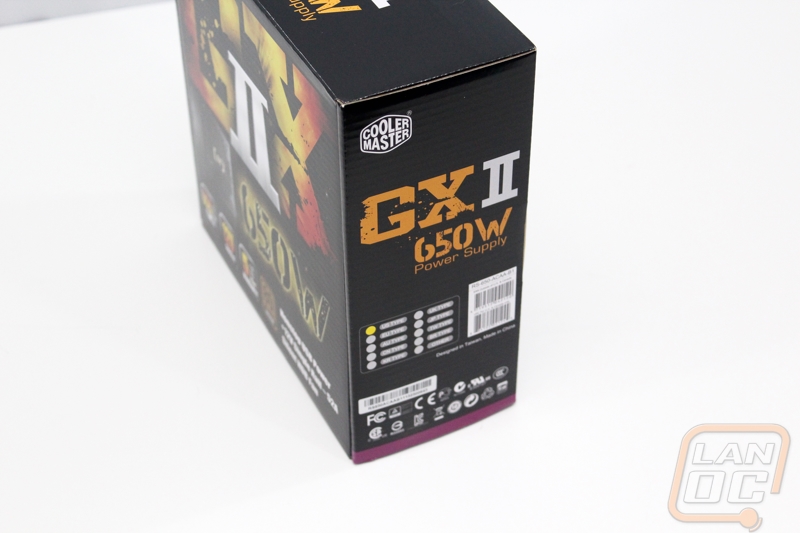 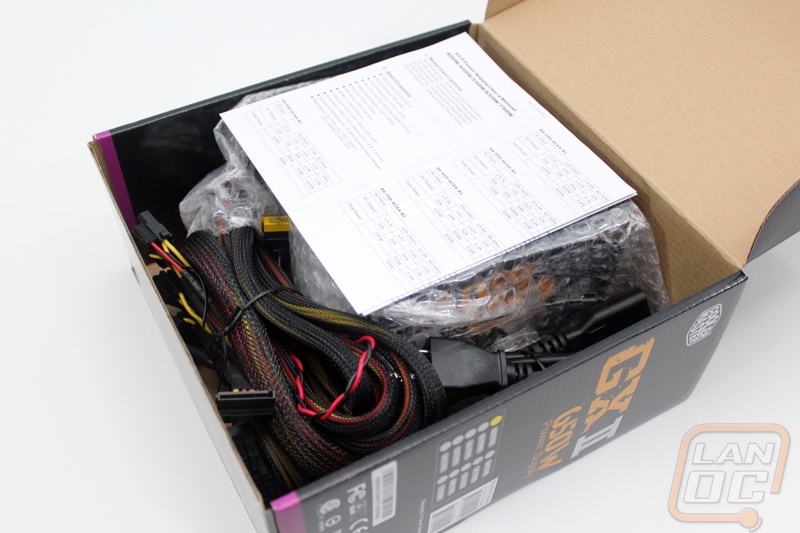 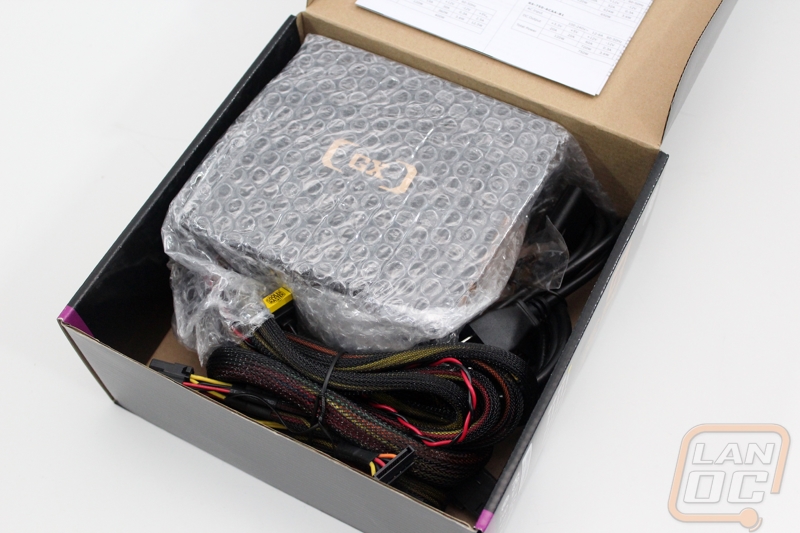 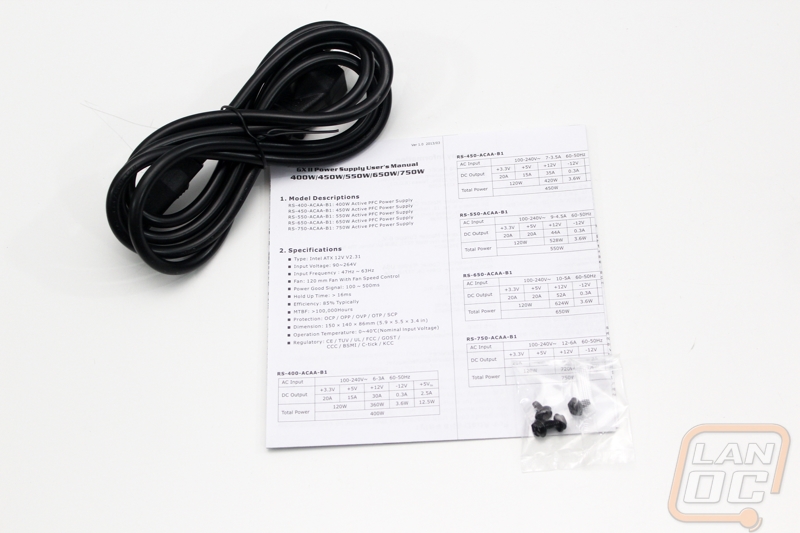 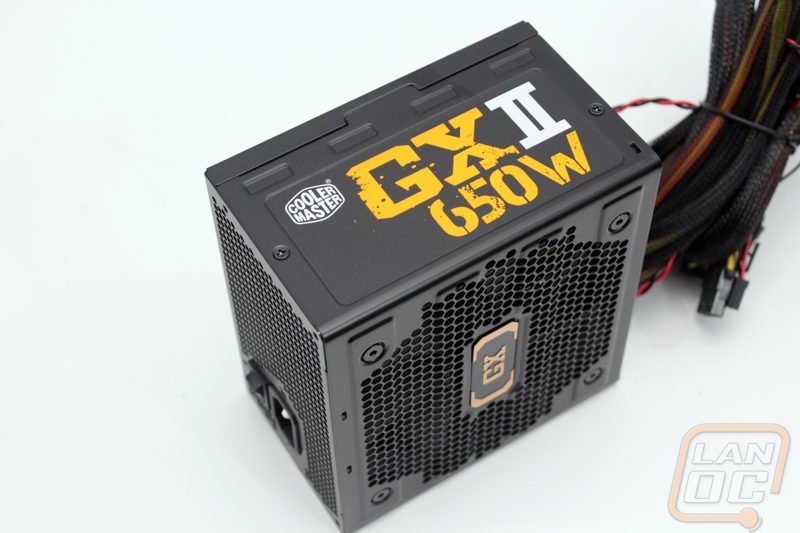 We mentioned before that the GXII is equipped with a few upgrades from the original product line. The connectors between the two are mostly identical, providing standard 20+4 motherboard, 4+4 12V CPU, two 6+2 PCI-e, six SATA (three in-line on two runs), three 4-pin Molex (all in-line on one run) and one 4-pin Floppy. 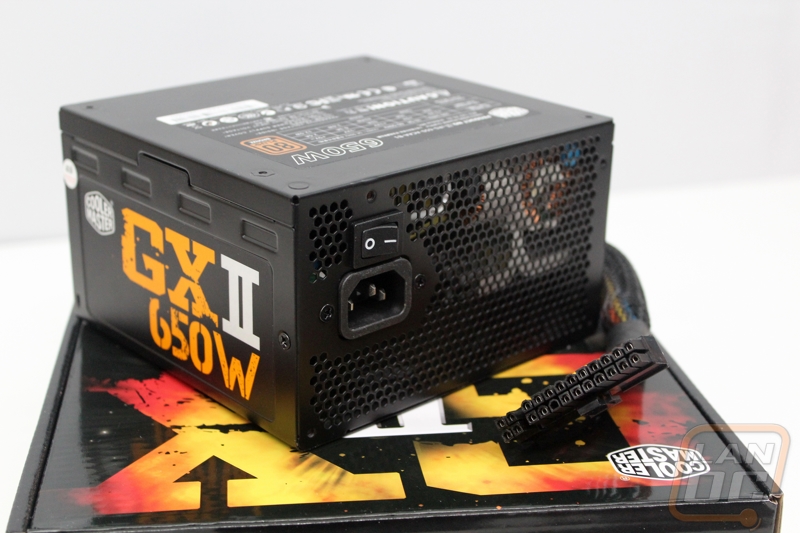 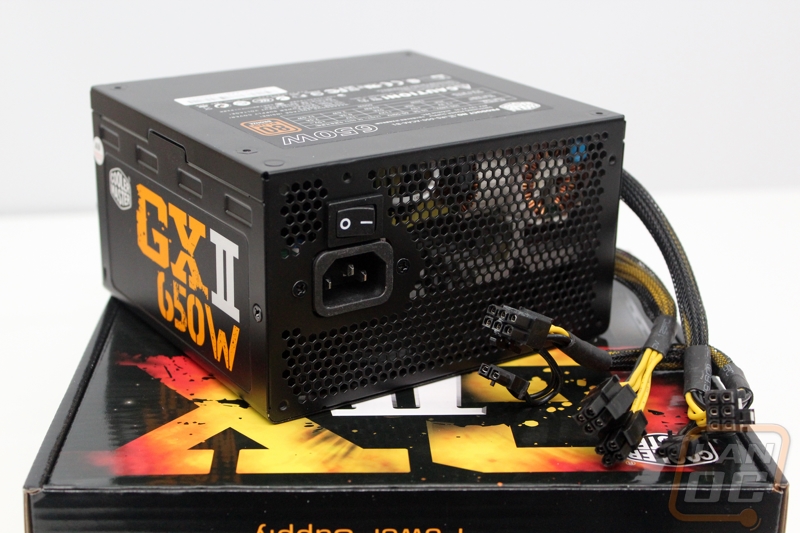 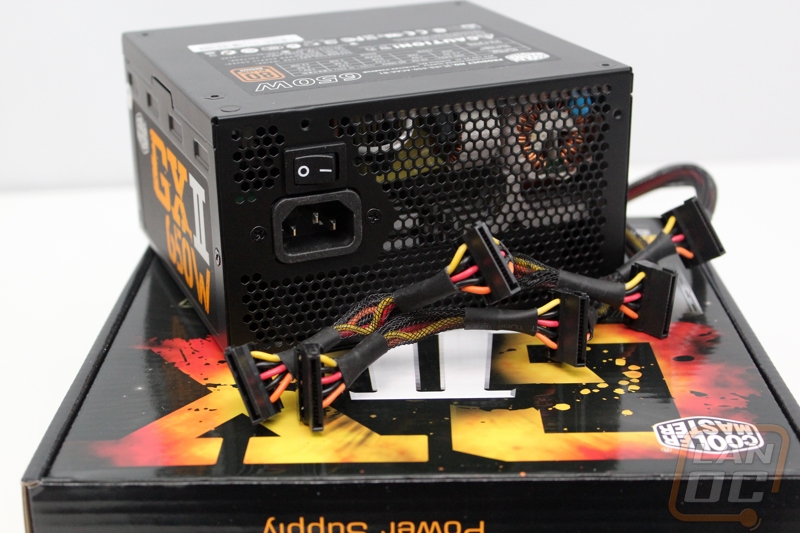 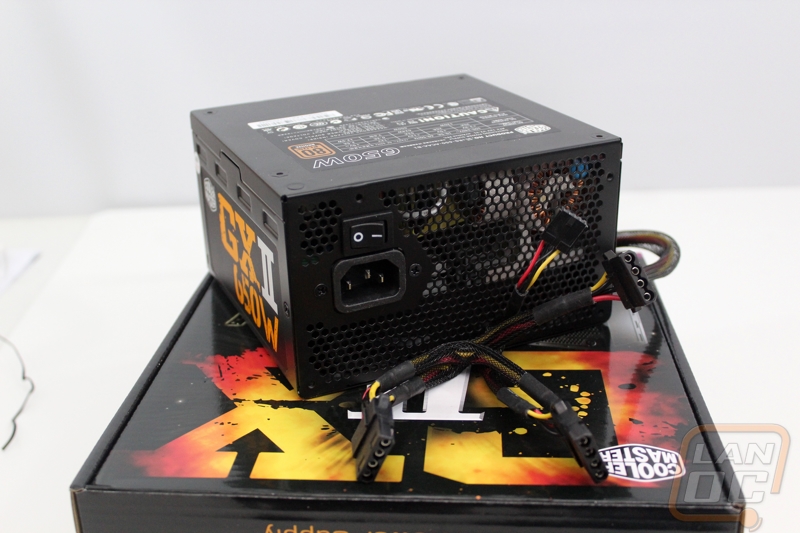 There is a subtle addition of a USB charger cable, which is an in-between connection for the USB header on the motherboard. Instead of connection a front-panel, or any other USB 2.0 expansion mechanism, directly to the motherboard the power supply connects first. This allows the for the corresponding USB 2.0 ports to remain powered even when the computer is powered off. 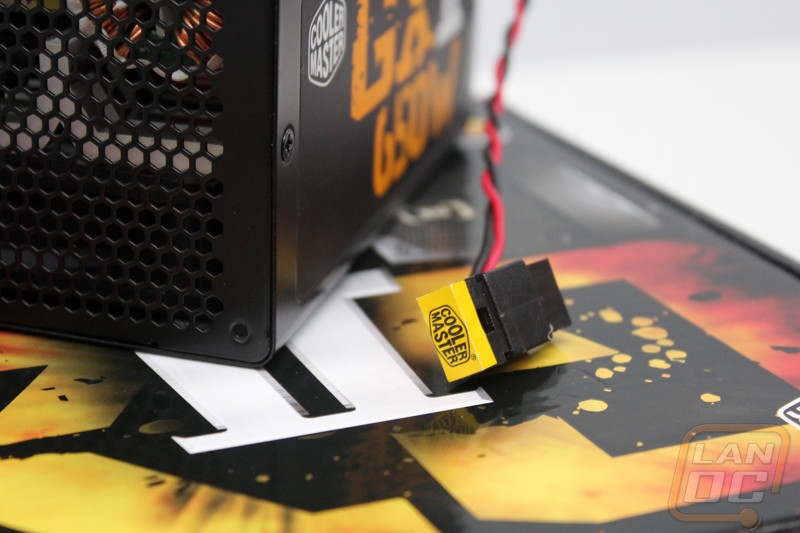 This is a nice feature for those energy-conscience users that still rely on USB-powered devices charging through the PC, but I can’t help but feel it is an odd addition especially on this product. The GX line is marketed towards gamers looking for performance on a budget, and charging USB devices when the computer is off isn’t a feature that is in any way really specific to the gaming crowd. Not to say that there aren’t those who would take advantage of it, but I can see a feature like this getting more use from a general home or office system. One situation I can think of is wireless peripherals, in which case if you’re unable to charge your gaming mouse or headset because you turn your computer off at the end of the night, then this may be a godsend.

Worth pointing out too is the fact that this functions with a USB 2.0 header. I’m not going to attempt to prophesize the end of USB 2.0, but remember this is only for a front-panel or other auxiliary USB hub. There are currently cases on the market equipped with only USB 3.0 ports on the front I/O, and that trend will only grow as USB 3.0 comes into its prime.

A personal pet peeve, Cooler Master ships this connector with a protective adhesive covering since it is a live connection, but this is really a half-hearted effort. Once you break the seal, it isn’t replaceable. In fact, “breaking” the seal is somewhat of an ordeal itself. The sticker is perforated around the top of the connector, but opening the connector through this method still leaves the sides of the sticker on the header. Trying to remove the remaining sticker is about as easy as you’d imagine. While this is probably a result of trying to keep cost low, I think a rubber cap of some sort would be worth it, especially in the event you decide not to use the connector for whatever reason. 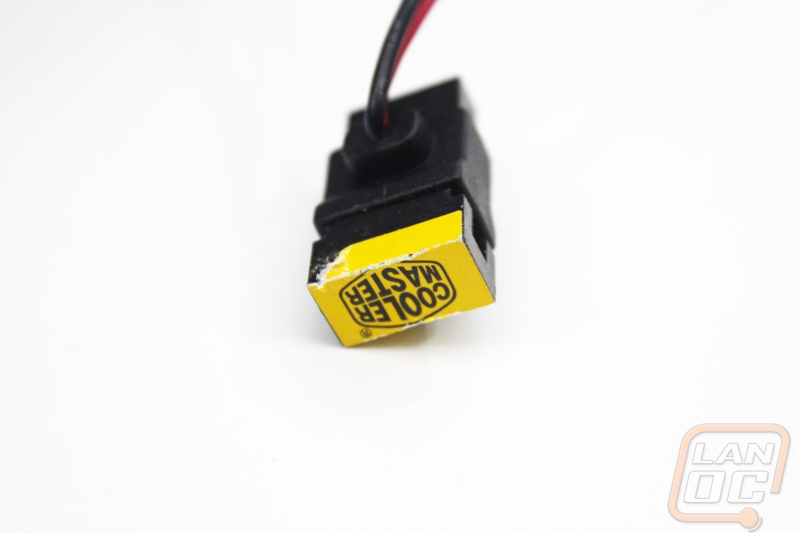 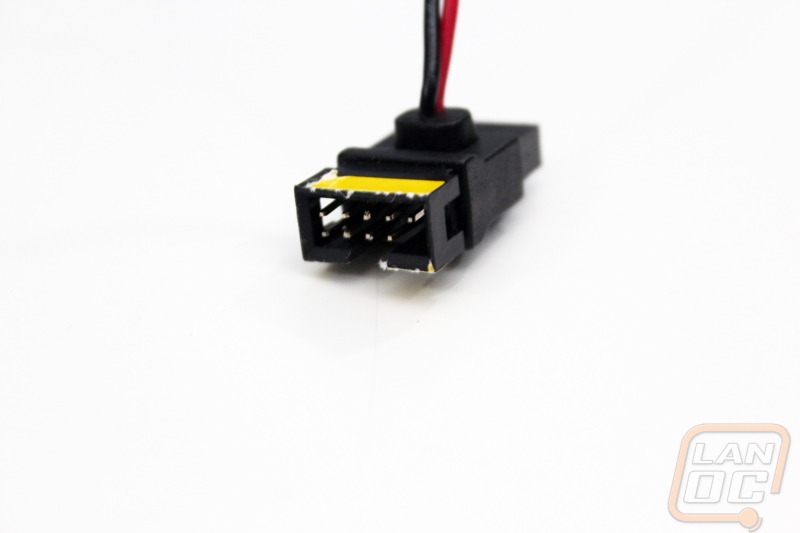 The other major upgrade for the GXII is the 120mm fan, which is now a hydro-dynamic bearing unit. This will help in the overall longevity of the unit, as well as the amount of noise produced. While the reduced noise level is a nod towards the enthusiast crowd, luxuries such modular cabling, high energy efficiency, and theme-conscious design are sacrificed to bring the most performance at the lowest cost.  Since there is no modularity of any kind, organizing excess cables will take some effort. The main color of the GXII itself is dark enough to blend in with the majority of builds, but the logo printed on the side of the unit will stick out by design. To be fair the logo isn’t ugly, but if subtlety is important you will likely have a hard time getting over it. There is also a GX badge centered in the fan grill on the bottom of the unit that is executed with a bit more tact, but unless you’re inverse-mounting you’ll never see it.  If you’re using a case that requires this type of mounting, you’ll unfortunately have to deal with the aforementioned logo print upside down. 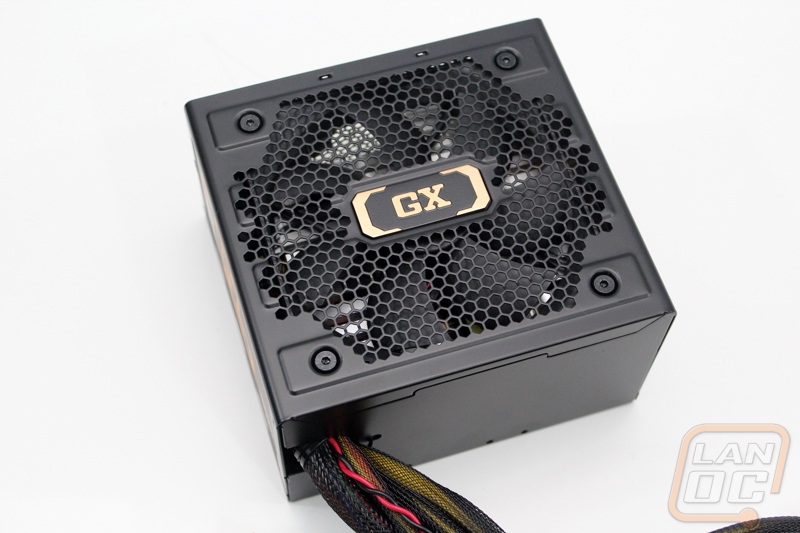 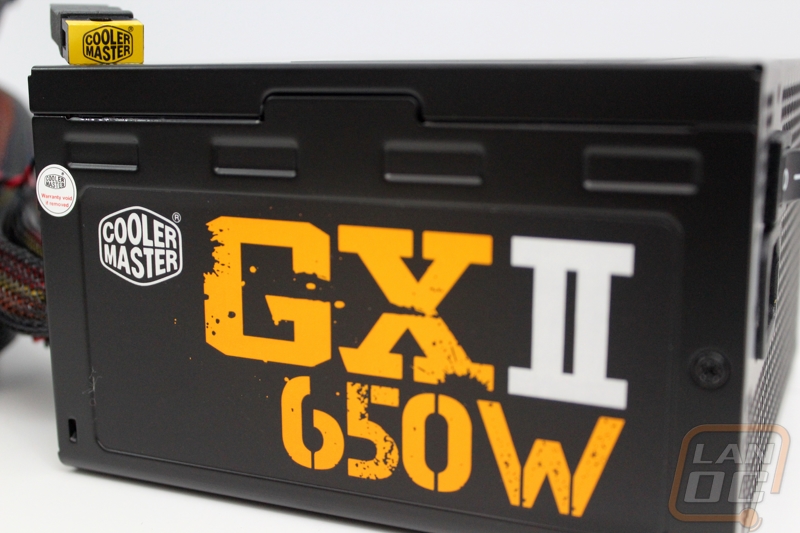 The GXII 650W version has an MSRP of $79.99, which is actually a bit cheaper than the original GX when it debuted. The price is pretty much spot on for the respective markets (the GXII is available in 650W, 750W, and 850W flavors) but manages to ice the vanilla-performance cake with a few extras such as a quieter and more reliable fan and continuous USB power ports.


Overall
The GXII should be a consideration for any build looking for solid performance at an affordable price. Equipped with a variety of connectors, including some floppy love and a thought-that-counts USB 2.0 non-stop power function, there should be no problem finding power in a medium-end gaming build.  The HDB fan upgrade is a nice touch, but if you’re looking for further enthusiast features such as sleeving, modularity, or the best efficiency, I’d recommend browsing some of Cooler Master’s other offerings. However, if you’re looking for the power and reliability your rig needs without the paying enthusiast premiums, the GXII line should be at the top of your list.