Thermaltake's power supplies get a step up from pure power to tough power with the launch of their new line. Justifying it's name, the Toughpower XT sports a long list of features, including performance under extreme conditions while remaining cool and quiet. Thermaltake has sent us a sample of the 775W model to put to the test.

Packaging
The majority of the containing box doesn't give much insight to the unit itself, mostly a black background accompanied with text callouts of key features, and some great tables and a chart on the bottom that touts the advantages of the XT. The closest thing to an overall shot of the actual power supply is on the bottom as well, in a small thumbnail. The next best thing is the large top image of the unit's fan grill, sporting the sleek Thermaltake logo. 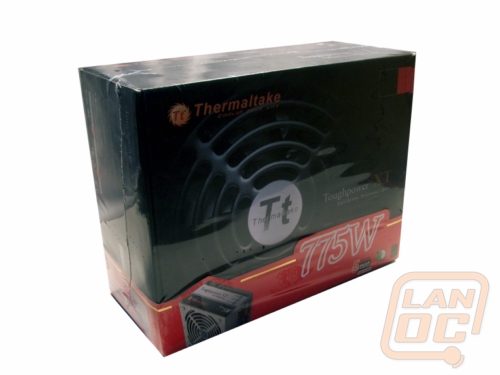 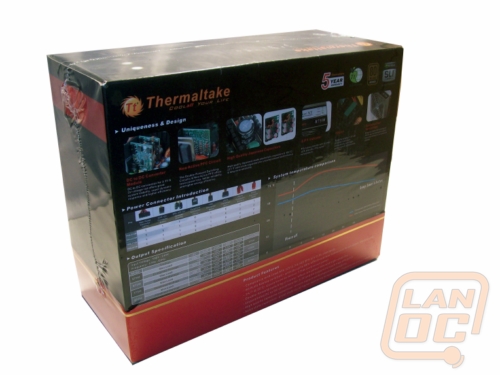 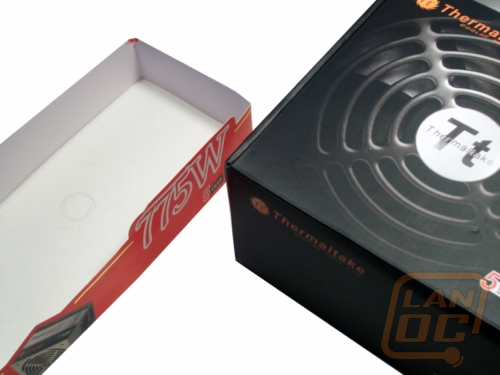 As a well established fan of Thermaltake's design of products, having worked well with their CPU coolers in the past, I was anxious to see the actual supply. With the red banner and color square along with the solid black background, I had subconsiously set an expectation of a standard black piece of hardware.

First you'll be greeted with some instructions leaflets, but your attention is more likely to be drawn to the conveniently placed Thermaltake pouch on the side, which is always a nice addition for the modular units. The actual power supply is cushioned between two squares of foam on either side. 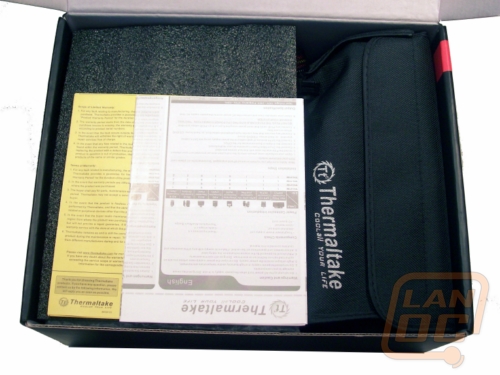 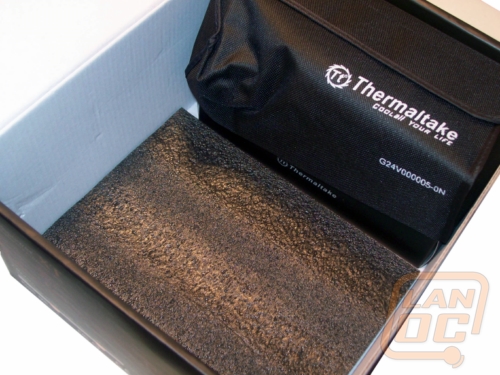 The power supply is then wrapped in bubble wrap with the 24-pin and EPS connectors tucked above it. Unwrapping the unit, I was surprised to see that the power supply was a dark green color. It's close enough to black to match painted interior cases well, but unique enough to stand out, with an almost military look to it. 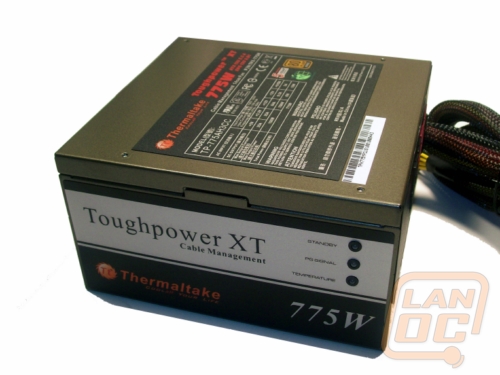 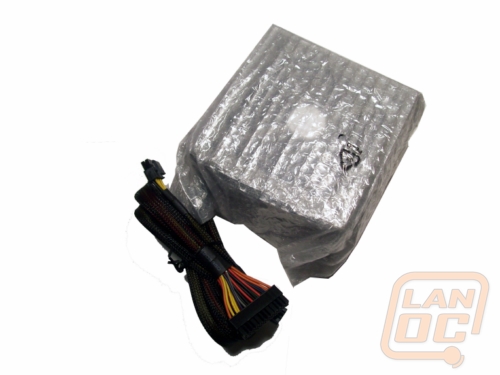 Inside the pouch, mentioned earlier, are a plethora of power connectors. Each is colored coded and tagged for your installation convenience. 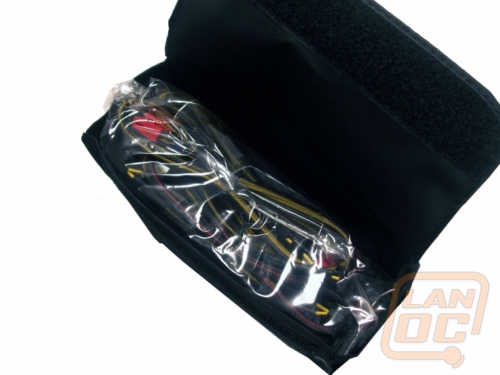 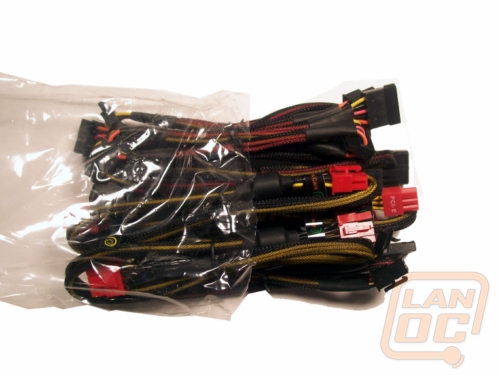 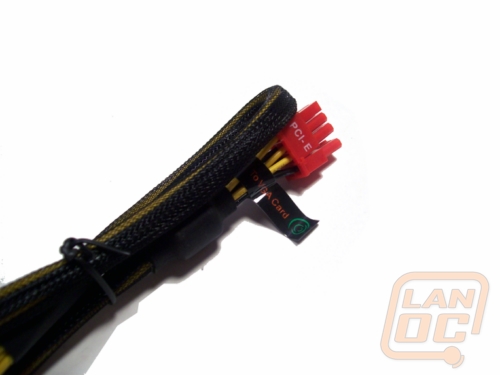 Installation
Speaking of which, Thermaltake has put some effort into making installation as painless as possible, especially with this particuliar model. This ToughPower XT is advertised with the subtitle of 'Cable Management', one of the necessary evils of any hardware installation. Though the entire unit is modular, only the 24-pin and 4/8-pin connectors are attached, which you'll always being using anyway. You'll also want to take care in securing the power supply into your case, as the finish can scratch easy. 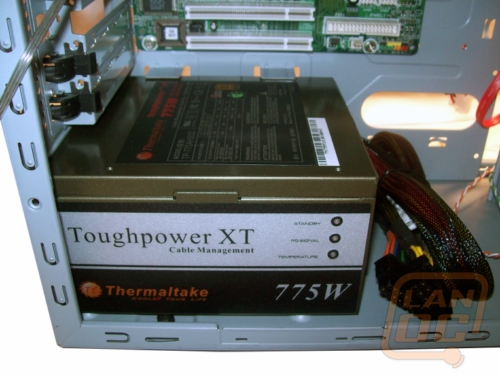 Once secured, the modular power connectors make an easy job of hooking up all your devices, with the ability to leave out extras that aren't needed. Thermaltake has even included a few Velcroe cable wraps to further aid in cable management. 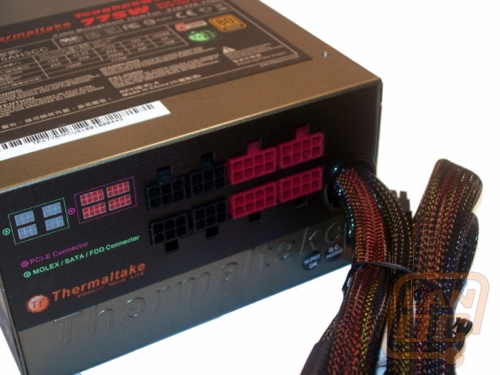 Performance
The ToughPower XT 775W has several subtle features to help it stand out among other units. The first is the 80 PLUS Bronze certification, meaning it provides up to 88% effective conversion, which helps cut down your overal electricty consumption. Also notable is the LED monitor on the side of the unit, which indicates a 3-mode selection of standby, PG signal, and temperature status. However, if you find yourself in the situation where you have to mount the unit upside down, the keys for this indicator will also be flipped.

Another interesting feature is the fan delay cool technology, which enables the 14cm fan to continue running up to 30 seconds after system shut down to properly cool down all the components. The XT 775W is also multi-GPU compatible, straight out of the box.

This unit features a single +12V rail aimed at being compatible with a wide array of high-end hardware. To test the voltages, we put the system under load with Prime95 and monitored the readings with a multimeter, and did the same for idle. 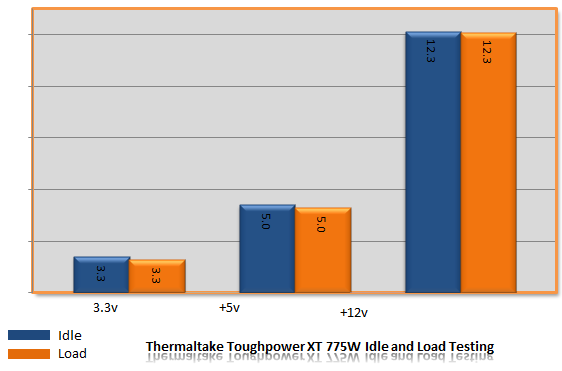 Overall
The Toughpower XT 775W definitely performs well, even under load and holds consistent. The modular connectors make for an easy installation and the appearance is different from the usual black, but still dark enough to not stick out like a sore thumb in enthusiast cases. With a nice rating, certification, and performance, the Toughpower delivers. 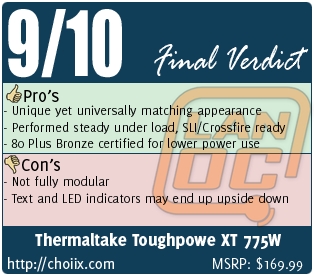 Author: Lersar
Contributing Editor / Event Staff
Adam is a big proponent of LAN parties, esports and speed-running, and helps organize our semi-annual LAN events. He has covered hardware and software reviews of a wide variety, but most content these days come from event coverage, such as other LAN parties.
Discuss this article
Log in to comment
Posts in discussion: Thermaltake Toughpower XT 775W Cable Management

We have 1292 guests and one member online