Given their wide spread availability including Box stores like Best Buy, Antec power supplies are well known. In the past their reputation could be called hit or miss when it comes to quality, but given our past experience with the Quattro 850 its obvious bad quality issues are in the past. The next step up from the TruePower Quattro is Antec's Signature line. Today I will be taking a closer look at an 850Watt version of the Signature line to see how it performs. 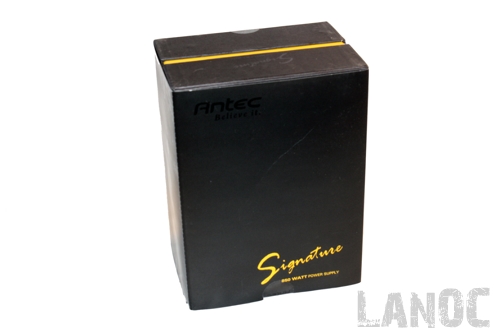 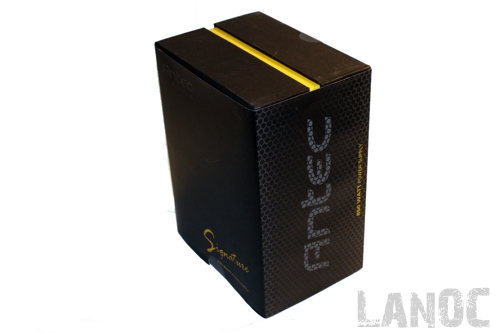 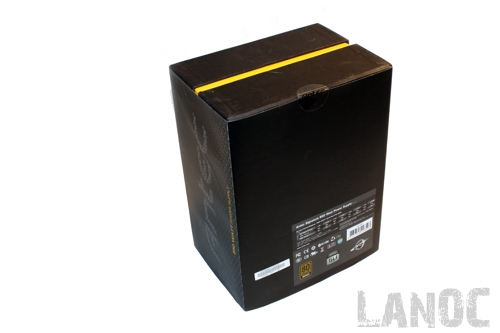 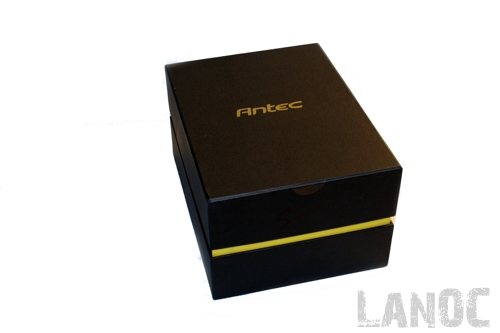 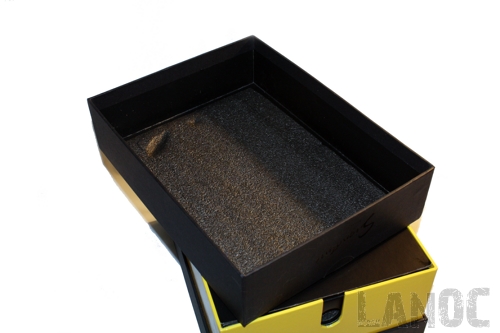 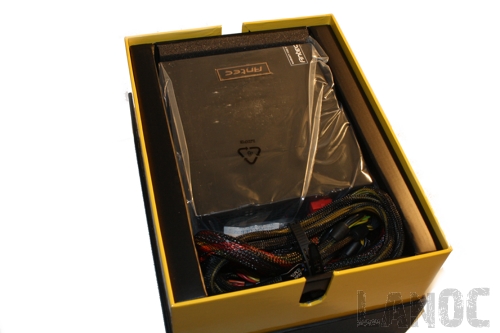 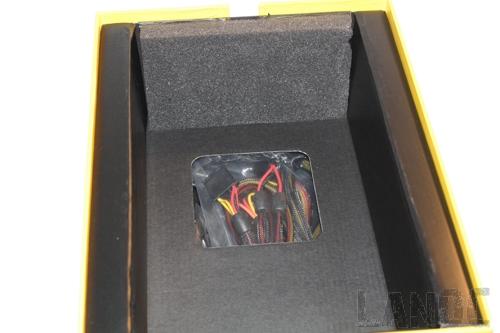 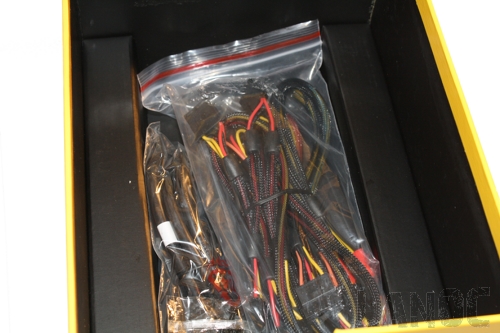 Apparently Antec really thinks their Signature series is something special. The power supply is packed in an extra thick cardboard box with a slip cover similar to some hardback books. The front of the slip cover is all black with the signature logo in yellow along with the power supplies wattage in small letters below it. On that back you will find the specifications along with the all important 80 Plus Bronze logo that means the Signature runs at 82% or higher efficiency at 100% load. Under the slip cover the box’s quality is leaps and bounds above your average power supplies box. Inside the power supply is tucked into layers of cardboard dividing the extra cables from the power supply along with all of the manuals. Along side of the manual Antec included a test report that includes the serial number of your power supply along with a listing of everything tested before it was packed up. At the bottom the report is signed by the tester, thank you Han-Lu! 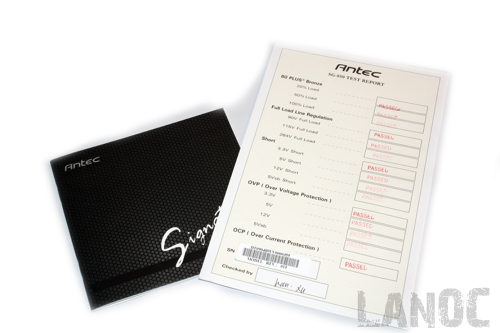 Well the Signature has basically the same wiring setup as the Quattro 850. My complaint then and now also is with the wiring thickness. The sleeving looks great but the caps at the end of the sleeving to keep it secure are so large that they made the wiring difficult to tuck between the back door panel and the motherboard tray. I also wasn’t a big fan of the somewhat modular cable setup of the Signature. With almost all of the cabling not being modular only some people will even need to use the modular cabling. Of course that also means that if you don’t need each of the hard wired cables you will be stuck trying to hide them. I would rather see high end power supplies like this one have the option to disconnect all but the 24pin. 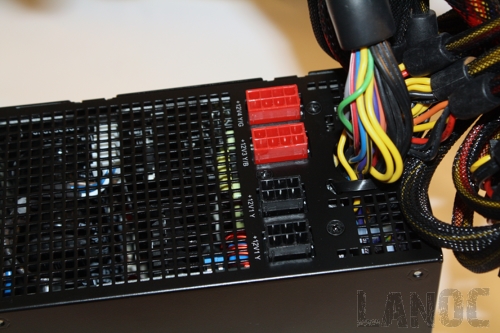 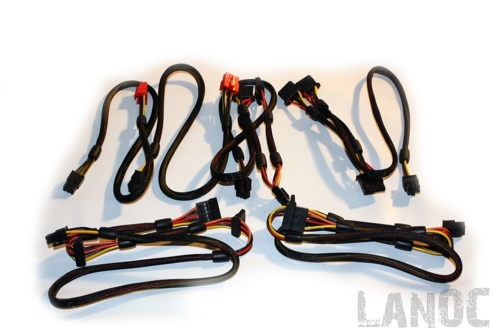 As I have talked about before, without a DC Load we are only able to use a high end pc to load up the Signature to see its performance. Basically we do real word testing rather than the more accurate and more expensive benchmarking. With an i7 rig with two 4870’s running in Crossfire and multiple hard drives all hooked up to the Antec Signature I should be able to push it a little bit. With everything hooked up I got the tests started with a game of Crysis. In the past I have used 3dmark but have found Crysis to put a higher overall load on the PC. Using a multi-meter I watched the load on each rail with and without the load, watching for voltage fluctuations and looking at the voltage drop when the load is applied. Here are my results. 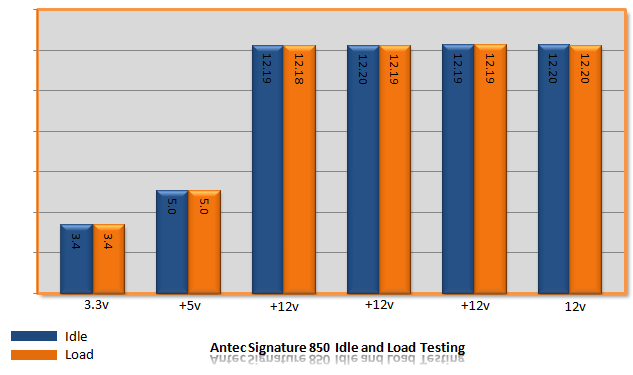 As you can see putting a load didn't even put a dent in the signature 850. Obviously it can handle a lot more if you need it. While testing the PSU I was able to get it warmed up enough to kick the 80mm PWM fan into high gear and I was surprised that the "small" fan was reasonable with noise, I'm really surprised Antec hasn't moved to 120+mm fans like most other manufactures. 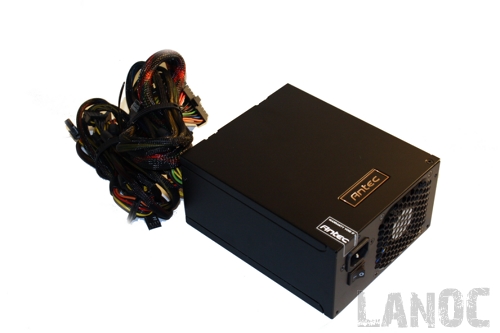 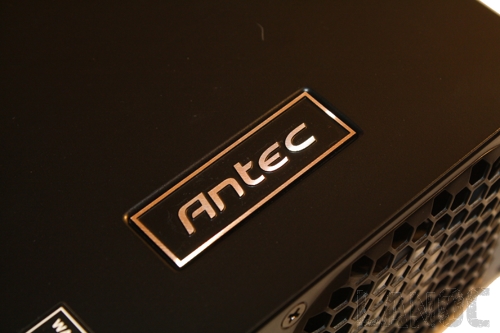 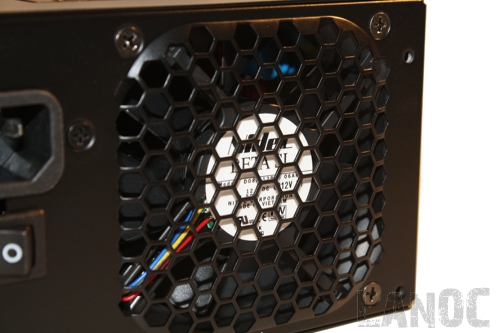 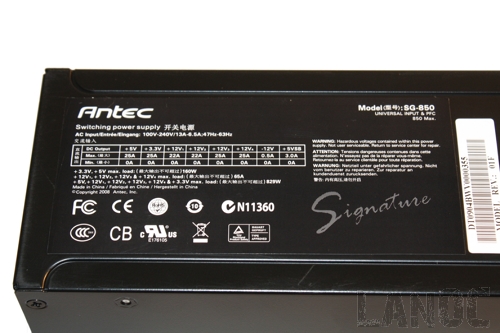 So earlier this year I took a look at the Quattro 850 and now I've had a chance to take a look at the Signature series. So what do I think? Antec has a great power supply with the Quattro 850 but the Signature's quality is a cut above. There is room for improvement still though, the half modular design is frustrating and the thickness of the cables makes it difficult to hide the wiring when doing a build. But with amazing performance, and an elegent style the Signature 850 Power Supply overcomes the pitfalls showing that Antec is still a contender in the Power Supply market. 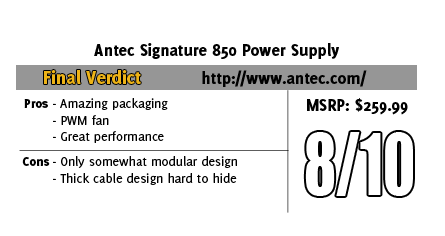 You might call him obsessed or just a hardcore geek. Wes's obsession with gaming hardware and gadgets isn't anything new, he could be found taking things apart even as a child. When not poking around in PC's he can be found playing League of Legends, Awesomenauts, or Civilization 5 or watching a wide variety of TV shows and Movies. A car guy at heart, the same things that draw him into tweaking cars apply when building good looking fast computers. If you are interested in writing for Wes here at LanOC you can reach out to him directly using our contact form.
Discuss this article
Log in to comment
Posts in discussion: Antec Signature 850 Power Supply

We have 1493 guests and one member online