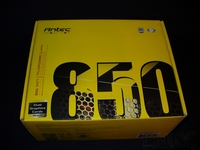 It’s hard to stand out in the power supply market, there really isn’t that much you can do to a power supply that hasn’t been done a few times at this point. Companies really have to depend on word of mouth and high wattage ratings to get people to consider their products. In the past I’ve heard good things about Antec’s power supplies, generally they weren’t considered to be top of the line but a good mid range power supply. Recently they have stepped up and are trying to change that image; one of their big gunners is the TruePower Quattro series. You can only get the Quattro series in a 850 or 1000 watts at this time, they are only looking to put these babies into high end gaming rigs. You may have noticed the TruePower Quattro 850 in our review of the Twelve Hundred; today we are going to take a closer look at it. 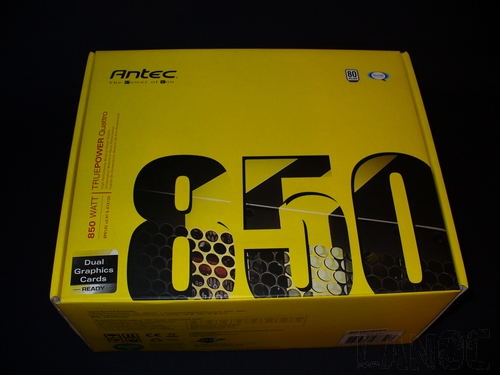 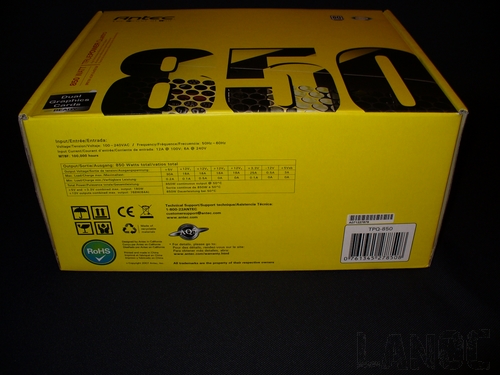 In order to stand out from other power supplies on the shelf and to match the stripes on the power supply Antec has put the TruePower Quattro 850 in a bright yellow box. On thing is for sure, you aren’t going to miss this box. You would also have to be blind to miss the power ratting on the front. They have put 850 in big letters across the front; inside those letters is a picture of the power supply. On the bottom of the box you find a full spec sheet. The back of the box included a list of features in multiple languages, because of this there isn’t much room for a lot of things on the back of the packaging. They did have room for a picture list of all of the connectors included. This is good information for someone who will be pushing the limit as far as how many Molex or SATA power plugs they will need, and the pictures com in handle if you know what the plug looks like but don’t know the name. Many of us have done this long enough to think something like this is trivial, but there are a lot of people who are still learning and things like this help them. 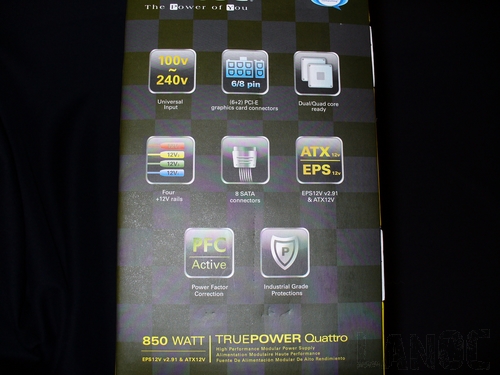 Inside the packaging you will find the power supply to be enclosed in a foam shell to keep it well protected. You will also find a shinny new power cable, a clear plastic bag full of different power cables, a small bag of screws, and a manual. Considering the racing theme and being geared towards the gaming crowd I was hoping to see a nice bag or box to store your extra cables in. 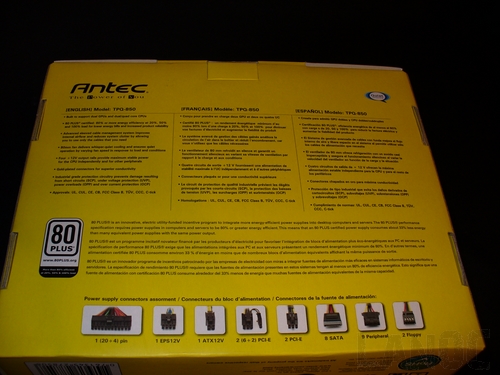 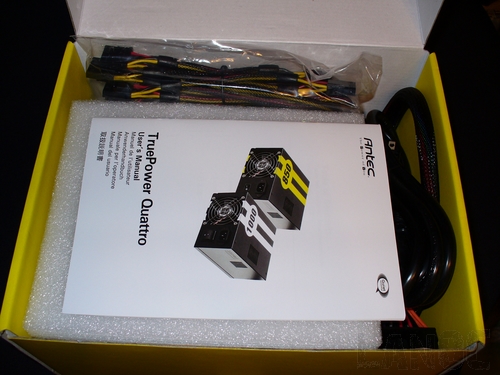 Installing the TruePower Quattro 850 into the Twelve Hundred case from Antec my biggest concern was installing the power supply all the way at the bottom of a very tall case. The power supply dropped right in, and we started by routing every cable that we could behind the motherboard tray. As I’ve talked about in the past with other power supplies, I would love to see the power supply company’s move toward thinner easier to hide cables. A good example of the type of cable I’m talking about is on the Corsair power supplies along with Ultra power supplies. I did run into a few issues of the cables being a little thick, which is to be expected with sleeved cables. Please don’t take this wrong, I love the look of sleeved cables and wouldn’t go without them, I just prefer the other style of cables. 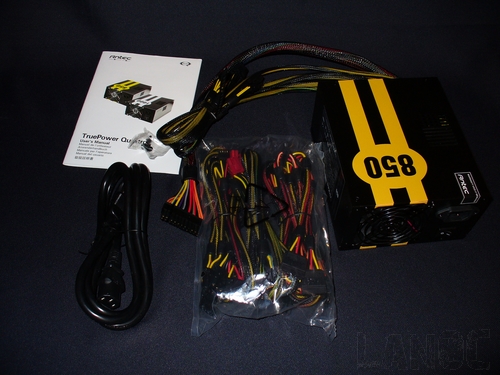 My concerns about the cable lengths weren’t an issue on any of the cables other than the 8 pin motherboard power cable. Getting to the plug wasn’t a problem, it only because a problem when I tried to run the cable under the motherboard tray. Given the size of the case and being mounted on the back I don’t think that any power supply would reach. The partial modular design made it much easier to keep the wiring to a minimum, if I had a choice I would like to see the motherboard 8 and 4 pin power plugs to be modular also. Considering you use one or the other you are guaranteed to have to hide one of them. The modular cables are easy to plug in and you are given a good variety or cables to choose from to make sure you aren’t too much or too little. It was great too see 4 PCI Express power cables included with this power supply. With video cards requiring more and more power its nice to know they included enough cables for two high end video cards running in SLI or Crossfire. 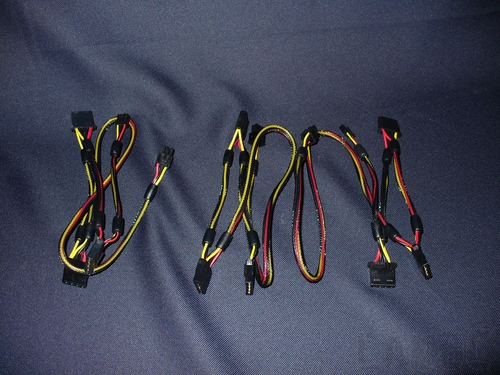 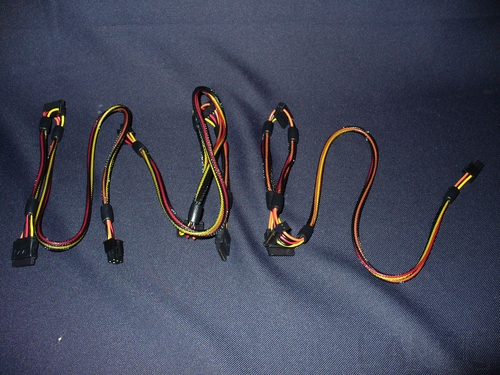 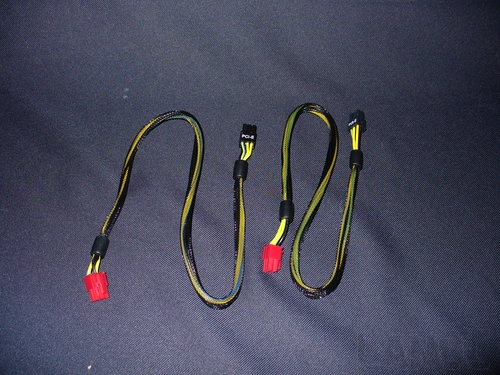 I would fist like to state as I have before that in no way in LanOC capable of the type of power supply review you find on Johnny Guru and Anandtech. We just don’t have to equipment to do the style of testing that they do. We have to rely on real world testing. Pushing the computer to the limit and using a multimeter to watch the voltage. It’s not the best way to test a power supply; it won’t tell you how it will perform at 1000watts under load. But it is helpful for most real world situations. 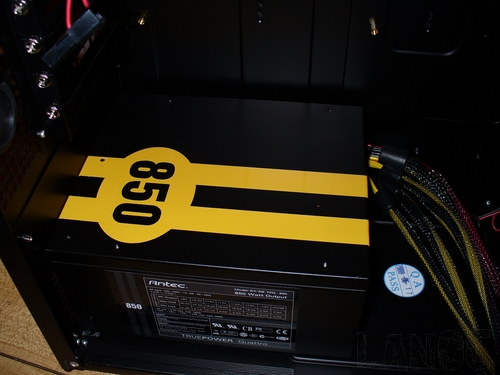 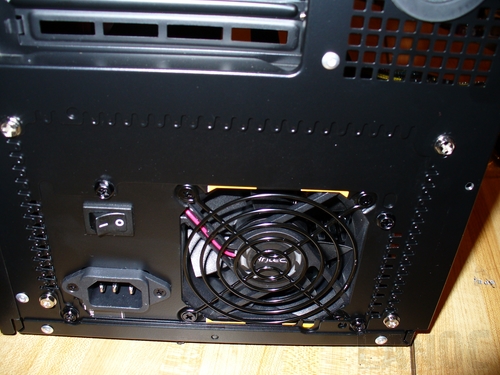 Once we had our rig up and running I ran it through its paces in 3dmark06 and prime95. All the while I was watching the voltages through our motherboards supplied program uguru and with a multimeter hooked into the lines. Even when putting the pc under load I never noticed a major drop or spike in voltage on any of the lines. In fact they hardly moved at all! Sure our rig doesn’t exactly put the 850 watt power supply under a major load. But it did give us an idea of what to expect. In fact you will be hard pressed to truly find a pc that needs anywhere near the 850 watts this beast puts out. If you do need more Antec does have a 1000 watt variation also. 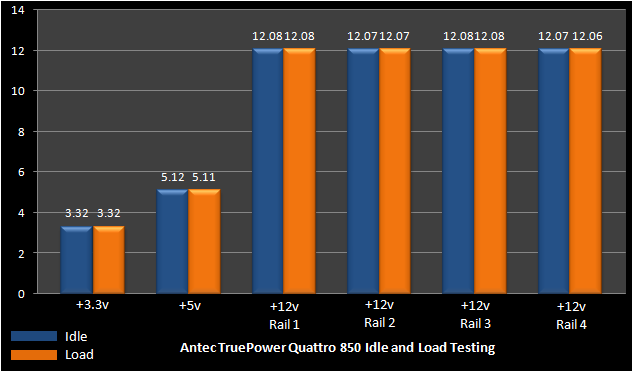 One of the trends in power supplies over the past few years is larger fans. Larger fans move the same amount of air at lower speeds than smaller fans. Sporting on an 80mm fan I was a little concerned that the TruePower Quattro was going to make too much noise. Even with our quad core cranking in prime95 the TruePower Quattro’s fan didn’t put out enough noise to even notice it. This was a major relief; the rear exit fan is actually perfect for the Twelve Hundred’s bottom mounted power supply. 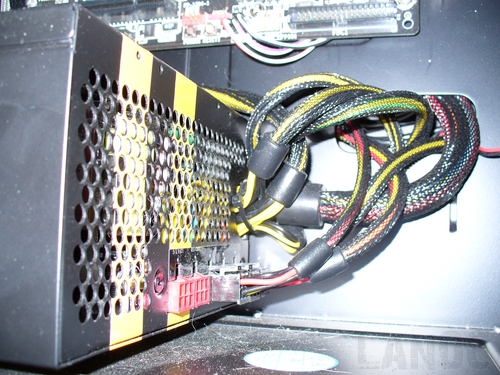 The TruePower Quattro is a good looking modular power supply that is designed for the gamer market. It is certified 80 PLUS bronze, apparently it was so close to being Silver certified that they are going to retest and hope it makes it this time. Either way it is good to know that it is an efficient power supply, we don’t want to waste electricity.  Even the bronze rating is great considering the 850 watt power output. The yellow stripes give it a distinguished style without being too overdone. The power supply fit great in the Antec Twelve Hundred we installed it in; impressive considering the power supply is mounted at the bottom of this very large case. The only downside was the cables are a little on the thick side. It would have been nice too see the sleeving go all of the way to the connectors and inside the power supply, the rubber caps at the end of the sleeving add to the width of the cables. It was also a little odd that they didnt include any grommet where the wires enter into the power supply. Although vibration is at a minimum in most pc cases, I worry that it could fatigue the cables over time. Overall the TruePower Quattro 850 is a great power supply from a great company. The MSRP of $249 is a little on the high side, but just glancing around you will find it running under $175. At that price this power supply is great deal! 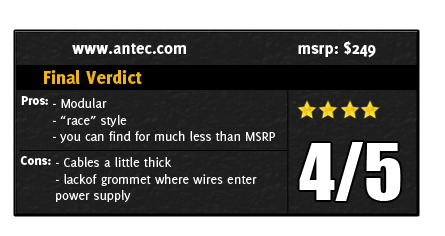 You might call him obsessed or just a hardcore geek. Wes's obsession with gaming hardware and gadgets isn't anything new, he could be found taking things apart even as a child. When not poking around in PC's he can be found playing League of Legends, Awesomenauts, or Civilization 5 or watching a wide variety of TV shows and Movies. A car guy at heart, the same things that draw him into tweaking cars apply when building good looking fast computers. If you are interested in writing for Wes here at LanOC you can reach out to him directly using our contact form.
Discuss this article
Log in to comment
Posts in discussion: Antec TruePower Quattro 850

We have 1608 guests and one member online