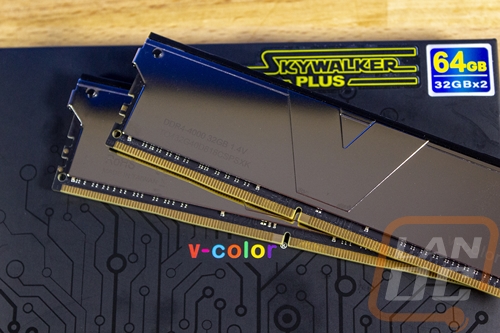 Maybe it's because I just finished watching the entire Star Wars movie lineup after finishing the Obi-Wan TV series but the name Skywalker evokes a little bit of nostalgia and is the last thing I would see as the model name for memory. But that is the name that V-color went with. We haven’t had anything in the office from V-Color but I have been seeing coverage about them pop up for the last few years and the company itself has been around going back to 2006. The Skywalker Plus lineup features heatspreaders with silver or golden plating on them which isn’t new but is rare to see and always stands out so I’m excited to take a closer look and see how they perform. Let’s dive in.

The packaging for the V-color Skywalker Plus DDR4 is the standard size for a dual channel kit and has a thin cardboard enclosure around the main tray to be printed on. This was done up with a dark black background that then has a circuit board design printed over top in a gloss black. It’s a little hard to see here because our photo table wood had just been recoated which transferred some oily fingerprints onto the packaging but the design is a lot more noticeable in person. The v-color branding name is right in the center with each letter having a different color and at the bottom edge, they have a cool rainbow effect that stands out against the black box. Up in the top right corner, you have the Skywalker Plus brand name as a sticker which is in yellow and shares a lot with a large movie franchise in the font styling. Next to that is another sticker, this one lets us know this is a 64GB kit and that it has two 32GB sticks of memory to reach that. The packaging has been designed where that with stickers v-color can use it across multiple models which is efficient and works well. The back of the box has more of the circuit layout design printed on it as well as the color rainbow down at the bottom. They have a paragraph that tells more about the v-color brand and below that they give you a phone number and support email as well as their website address which uses the same individual colors per letter. There is a white sticker on the back here that has a full description of what memory kit is inside. Where the front tells us the model and capacity, here we can see that this is DDR4, the clock speed is 4000 MHz, and they have the timings as well. Below that the sticker also has the serial numbers for both sticks or memory. 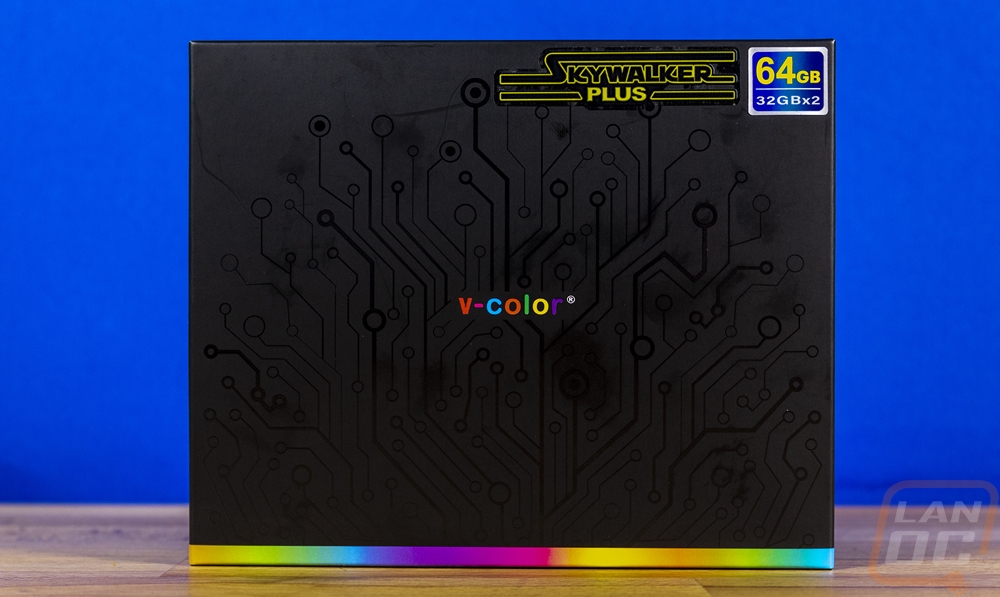 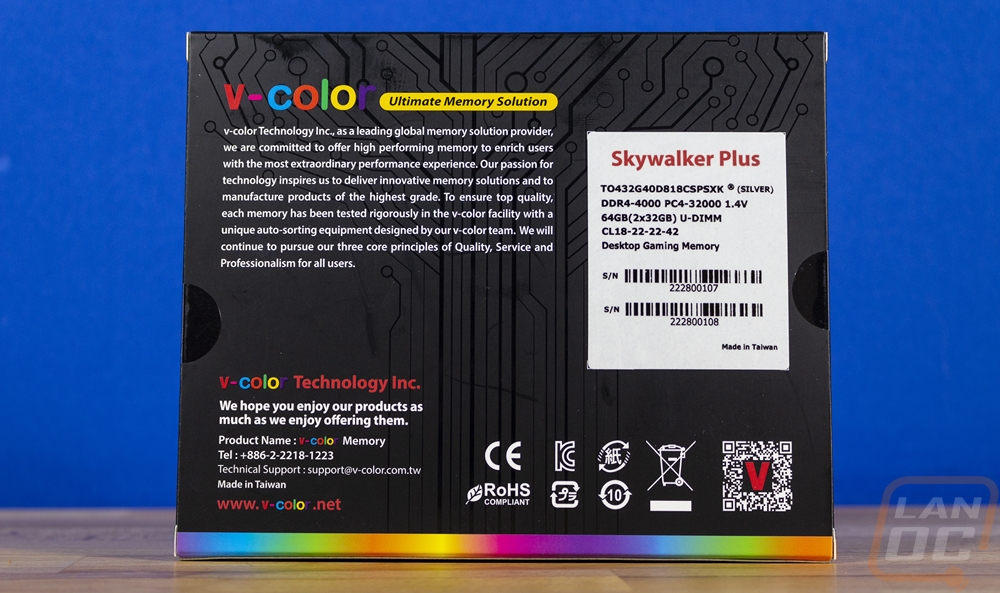 Inside of the box, the V-color Skywalker Plus DDR4 ram comes in its clear plastic clamshell tray which is what gives the packaging all of its main structure to keep the memory safe. Given that they used this clear plastic it's kind of a shame that the box itself doesn’t have a window showing what the memory looks like inside. 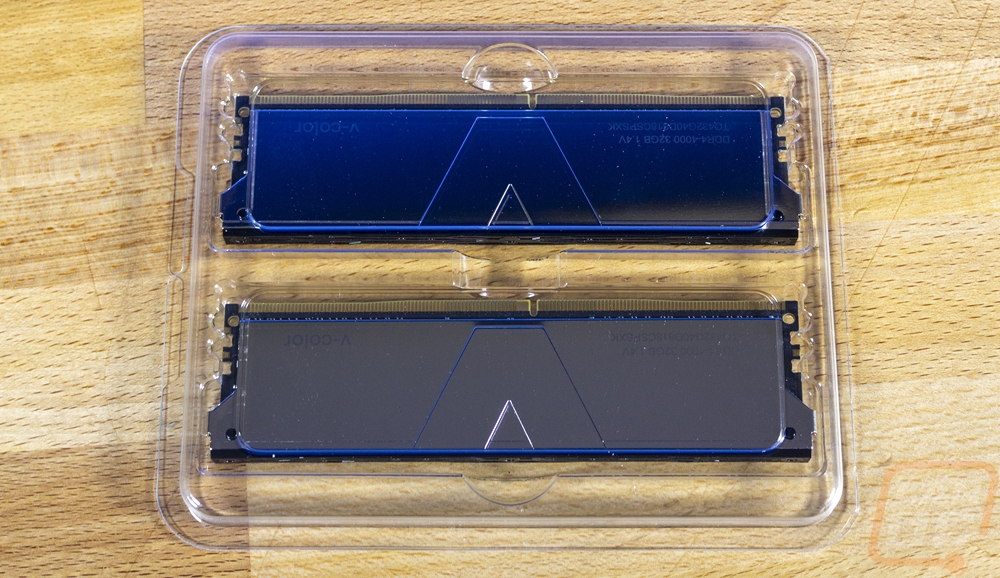 So the overall design of the V-color Skywalker Plus DDR4 has heatspreaders on the side, with a black filler at the top. The side heatspreaders are available in two different finishes and both fit with the Skywalker theme. You have a chromed finish which is what we have here and then what they call “golden” plating which they don’t call gold but from the pictures, I have seen looks like it is a mix of a gold finish with a little more bronze reddishness in it. Gold is expensive so I do understand why they wouldn’t want to go in that direction. The heatspreader design is flat except for a V shape in the middle for the v-color name. The overall finish on our chromed model is top-notch, it's very hard to photograph but look at the reflection when I put the packaging above it, it’s a mirror finish. That is the best part about using a chrome finish, it is just going to reflect what you have around it which will look good in any system and goes well with lighting as well. 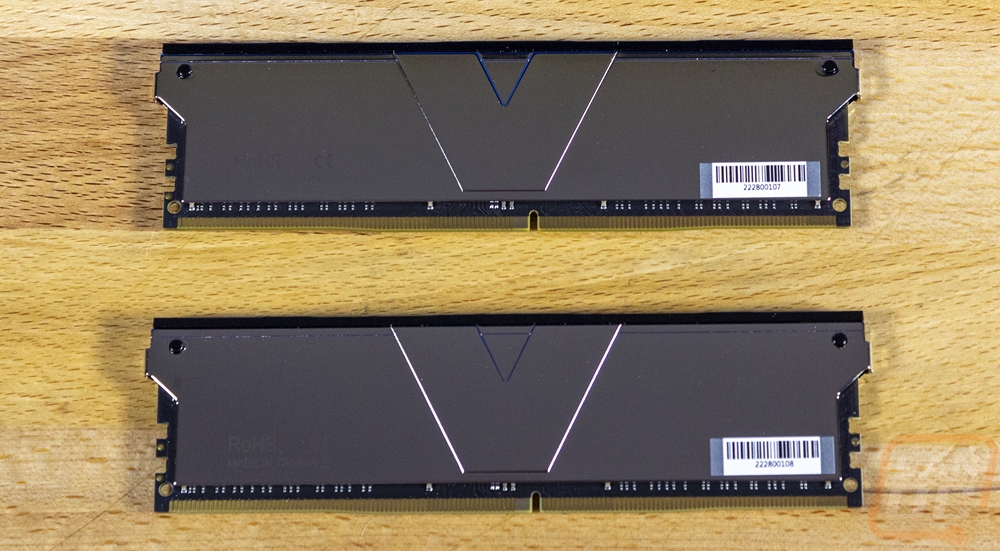 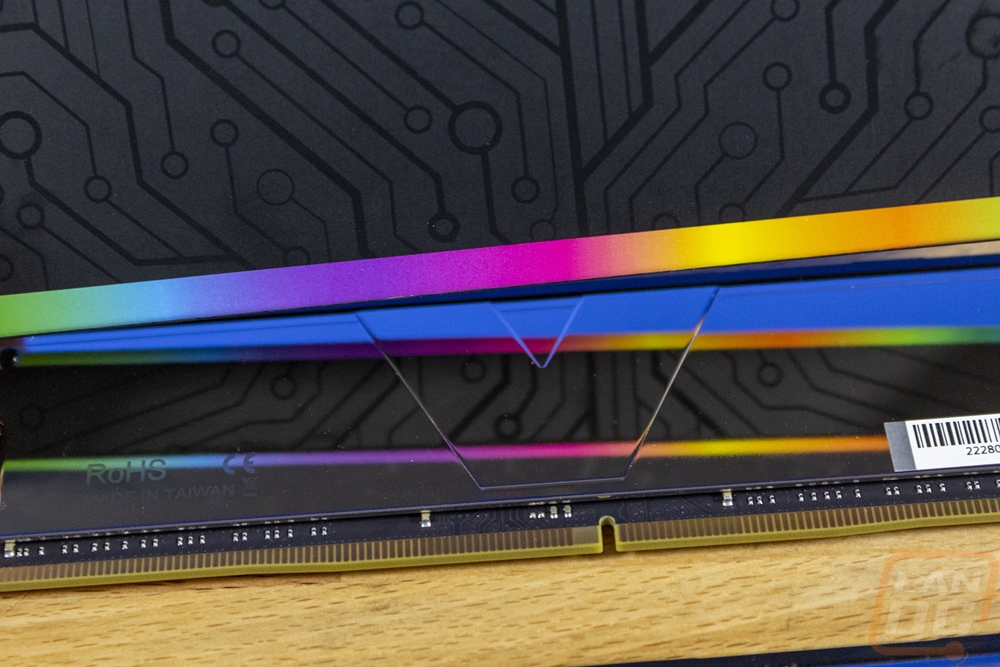 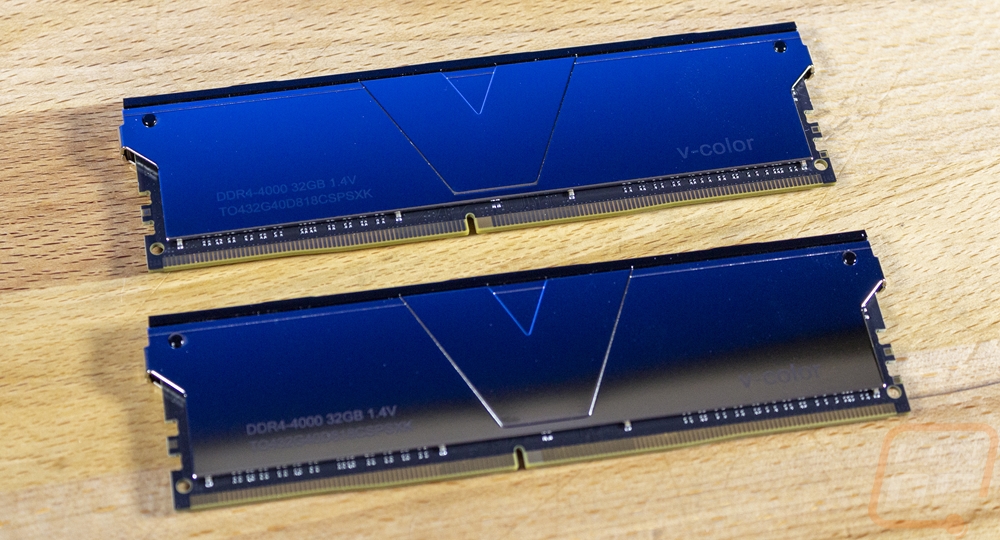 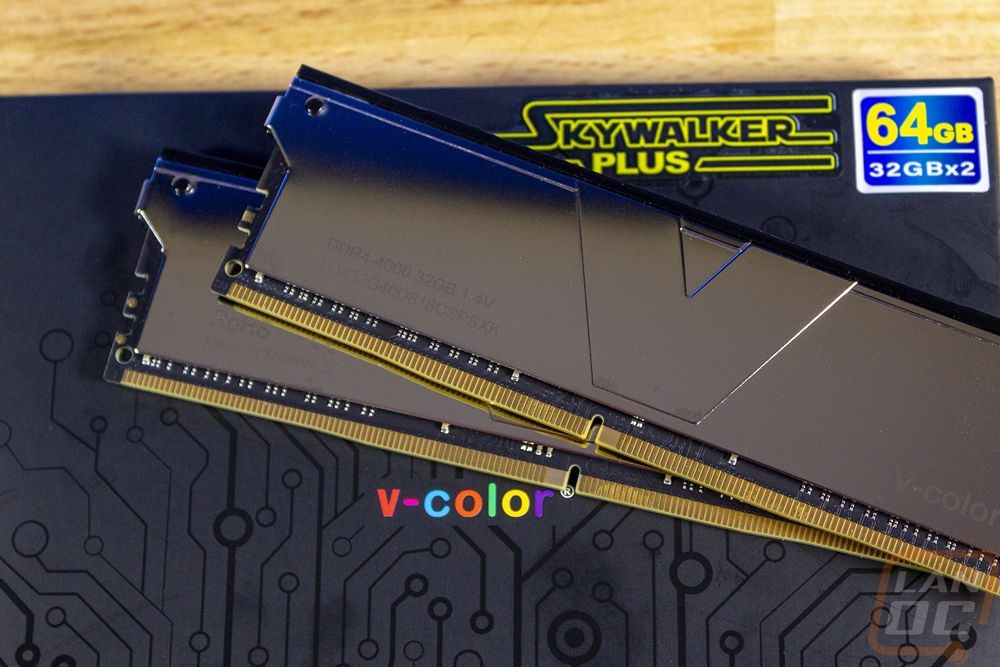 While from a lot of angles the V-color Skywalker Plus DDR4 does look to have just the chromed finish and nothing else, if you take a closer look there are a few spots with things etched onto the surface. The bottom left corner on one side has the full model name and the memory speed, voltage, and capacity. The other end then has the v-color branding on it. Interestingly enough they also offer customization with this as well and they will etch on text that you give them so you could add a funny joke or the name of your build as well. The back side has the RoHS logo and the manufacturing location and a sticker with your serial number as well. 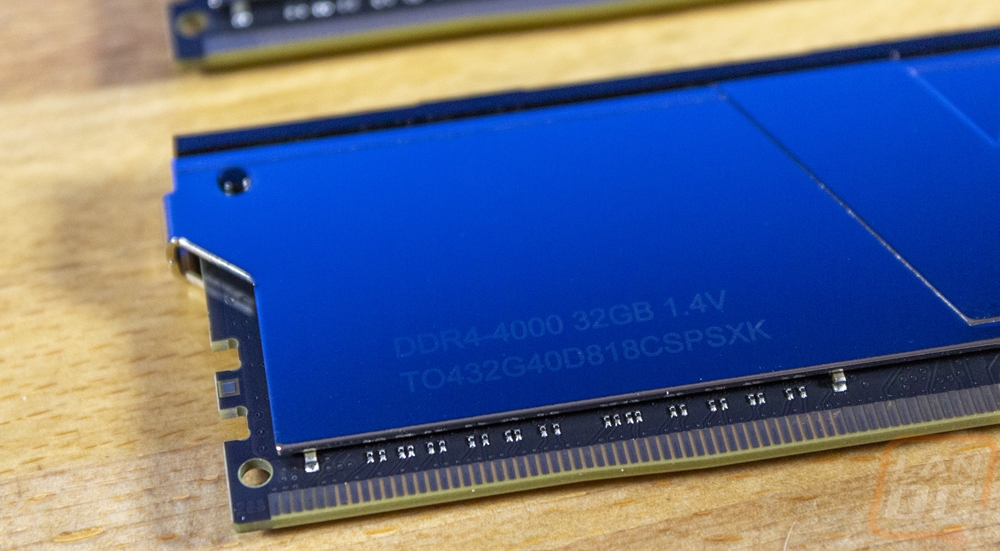 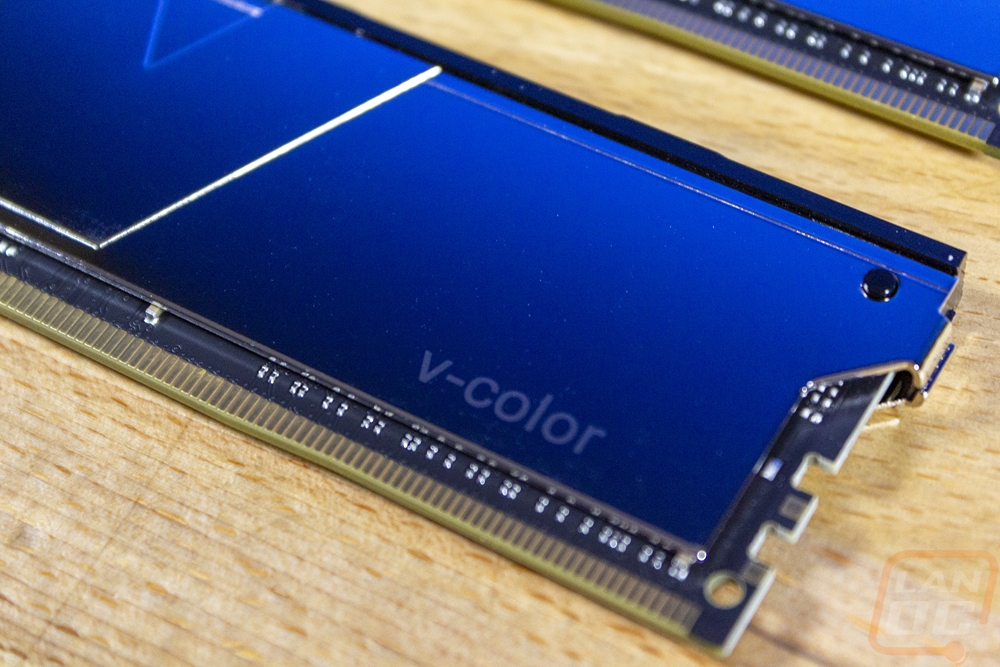 At the ends, we can see that the chromed heatspreaders do hook around at the ends and nearly touch the heatspreader from the other side. Then there is a black top cap that runs in between them keeping them evenly spaced out and with a pin through them holed everything together.

The top edge of the V-color Skywalker Plus DDR4 is in complete contrast to the chromed heatspreaders. The tops have a black section across the top which this almost architectural design carved in it that looks amazing. I would bet that a quad channel kit with this across the top would really stand out.

For testing, our test bench has moved over to Z690 with DDR5 back at the start of the year so in order for us to get testing done, I did have to switch back to our older AMD testbench. Once that was switched around I was good to go to put the V-color Skywalker Plus DDR4 to the test against the kits I’ve tested in the past. To start things off I went with AIDA64’s memory tests. AIDA64 tests read, write, and copy speed as well as a latency test. The V-color Skywalker Plus DDR4 did well in all of them with its 4000 MHz clock speed but came in just a hair behind the Ballistix kit with the same clock speed and slightly lower timings. 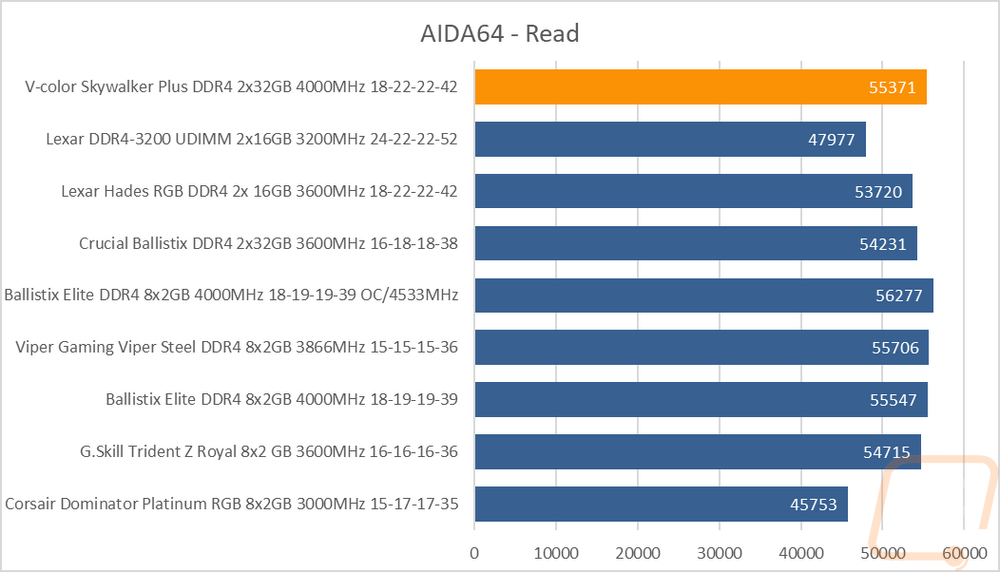 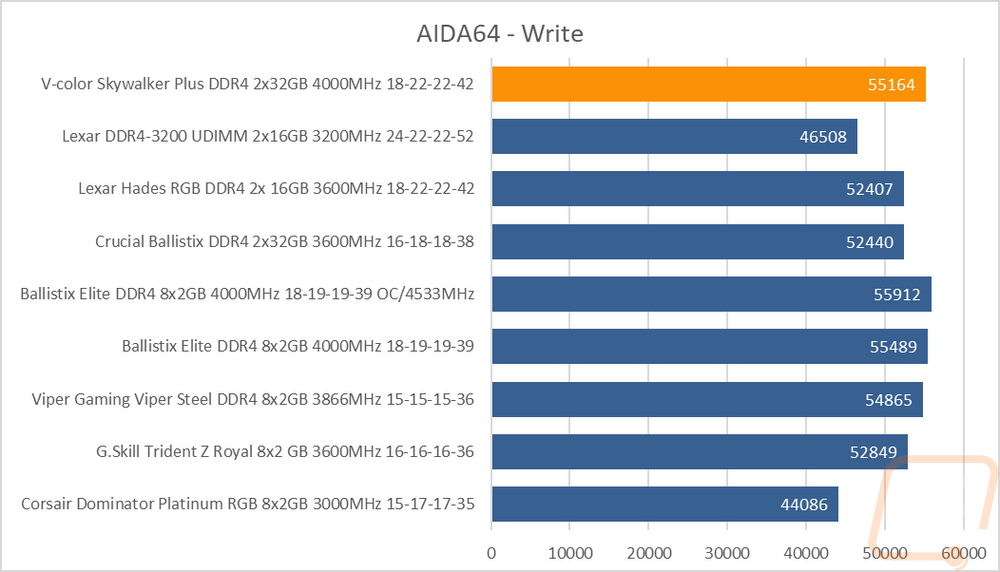 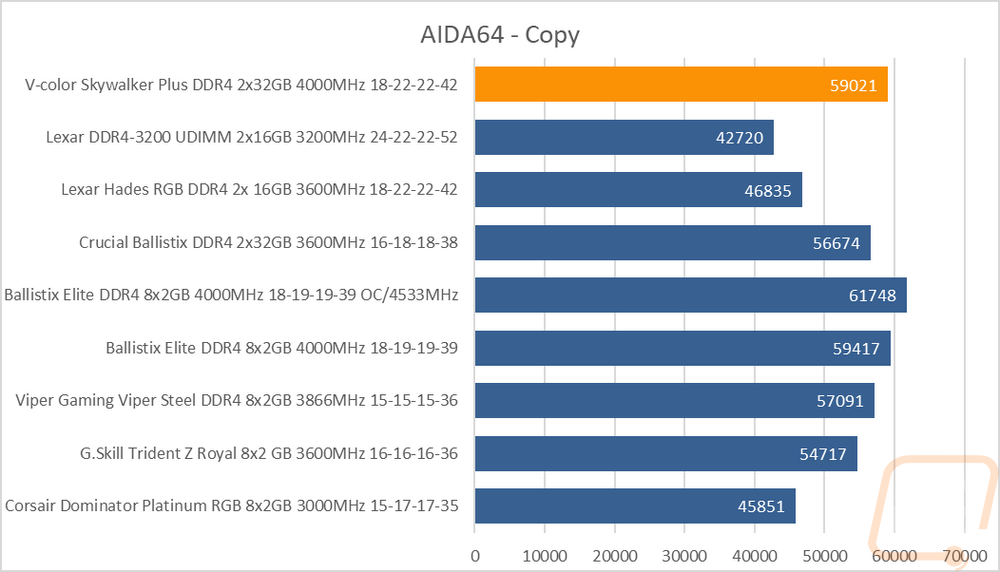 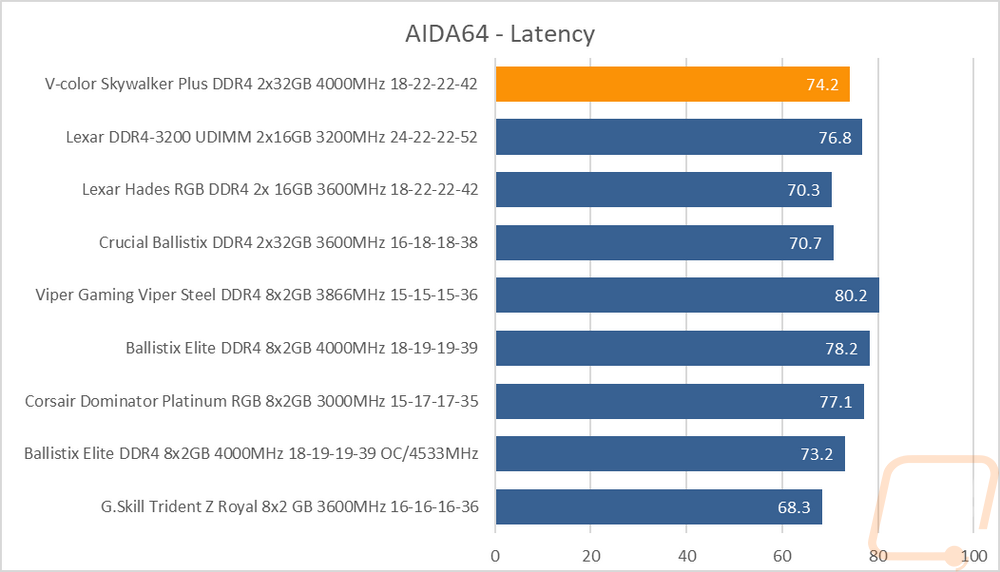 Next up I ran Cinebench R20 in both its single-core and full multi-core tests. This is a CPU-focused test but it does show the difference that memory clock speeds can make on an otherwise CPU-focused test. The V-color Skywalker Plus DDR4 did well here and outperformed all of the other memory I have tested edging out the Ballistix kit due to the larger memory capacity. 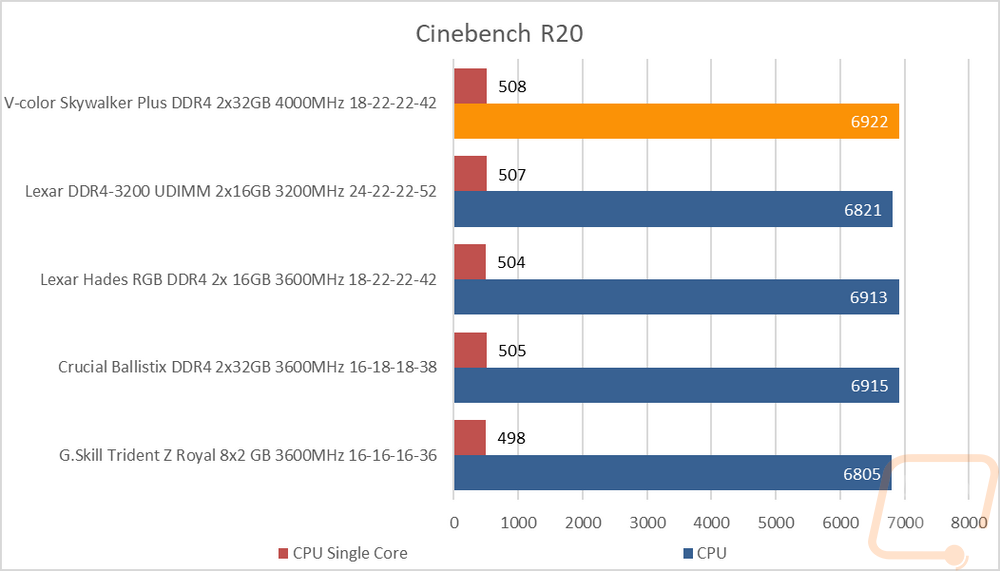 The last test I ran was Passmark Performance Test 9 which is a little dated now but because we were running on our older test setup I stuck with what I’ve run in past reviews. The V-color Skywalker Plus DDR4 did well here and was out ahead of everything else other than the one other 64GB kit but even then that Laxar kit came in behind due to the V-color Skywalker Plus DDR4’s 4000 MHz clock speed. 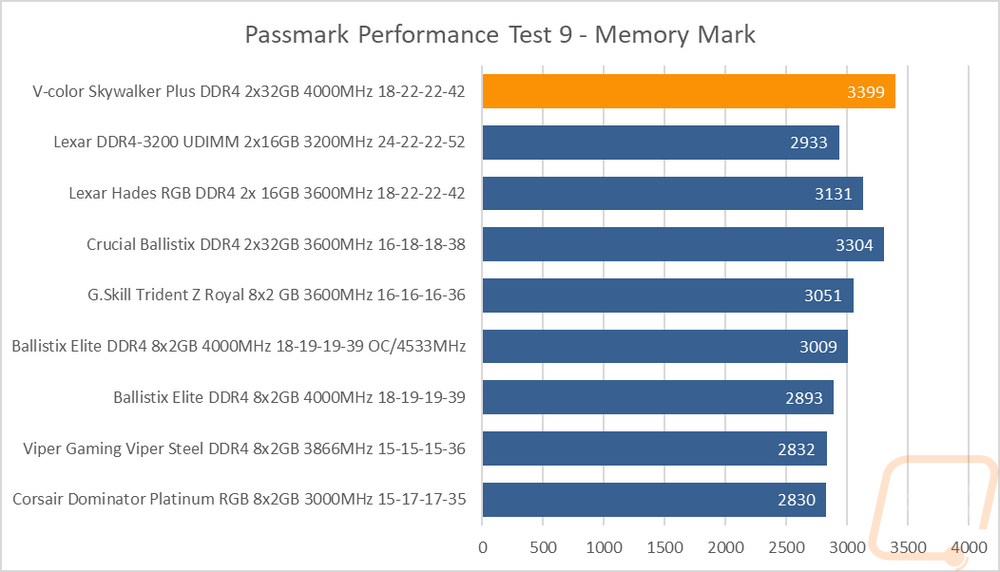 Being the first time I have had the chance to take a look at anything from v-color the V-color Skywalker Plus DDR4 was a good first impression. While I’m normally a big fan of blacked-out components, the chrome finish on our V-color Skywalker Plus DDR4 kit looks amazing. Not only is it a mirror finish, but it goes great with the simple design of the heatspreaders with just the V shape in them. The mirror finish will go with most builds and adding the black section at the top was a nice touch. While our kit wasn’t laser etched, having that as an option is a cool way to add a little extra customization to your build. The Skywalker Plus kit performed well in our testing and v-color does have a variety of clock speed and timings available.

They have the chrome finish as well as one they call Goldened which seems to be aiming for a gold finish but has a lot more red in it which ends up looking more like bronze. The kit that I tested specifically I couldn’t find for sale with the chrome finish but that may be a stock issue. With both finishes having a polished finish you are going to have to worry about fingerprints when installing them as well. My only other complaint is just that this is a DDR4 kit and while there are obviously still lots of people who need DDR4, AMD and Intel are both moving to or in the case of Intel have already moved to DDR5 and I would love to see that as an option.

As for pricing the 2x32GB kit running at 4000 MHz that I tested today isn’t exactly cheap with it currently selling for 279.99 and as I write this it is on sale for $269.99 on Newegg. But once we start comparing the pricing with the competition it's not that bad. There is only one other kit with the same capacity, clock speed, and CAS latency that sells for the same price and it isn’t sporting a mirror finish. Most of the other kits are selling for more. You can check out the competition with this link. 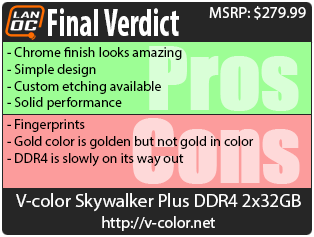 You might call him obsessed or just a hardcore geek. Wes's obsession with gaming hardware and gadgets isn't anything new, he could be found taking things apart even as a child. When not poking around in PC's he can be found playing League of Legends, Awesomenauts, or Civilization 5 or watching a wide variety of TV shows and Movies. A car guy at heart, the same things that draw him into tweaking cars apply when building good looking fast computers. If you are interested in writing for Wes here at LanOC you can reach out to him directly using our contact form.
Discuss this article
Log in to comment
Posts in discussion: V-color Skywalker Plus DDR4 2x32GB 4000MHz

We have 1375 guests and one member online