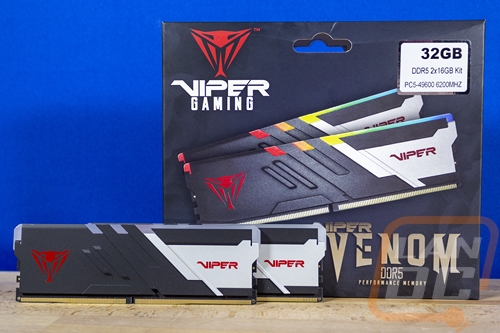 While it may feel a little late because the Intel launch was back in November, Patriot is right on time with their newly introduced Viper Venom DDR5 memory. DDR5 availability is just starting to open up and there aren’t many options that have higher clock speeds like the 6000 MHz that this kit is clocked at. The overclocked kit opened up the performance of our i9-12900K test bench with the kit showing a big performance increase over the stock clocked DDR5 that we had for the launch. It will be exciting to take a look at more kits in the future to see how things fill in. Beyond that, it is also exciting to have memory for expensive Z690 builds that will match/complement the look of the build. Some of the launch DDR5 as lacking heatspreaders and at best still didn’t have lighting.

Speaking of the lighting, the Venom kit’s lighting looks good and the top diffuser helps give a nice transition between LEDs. I’m also glad that you aren’t forced to use proprietary software, the kit has support for motherboard lighting software from all of the big names so you can tie all of your lighting together. As for the styling, Patriot went a different direction and didn’t just completely black the kit out even though I do love all black hardware. The mix of black the grey gives a little contrast that I think people will like. I would love to see an option with white heatspreaders as well as light white builds are popular now. They could also tone down the number of Viper brand references however, each stick has five of them and the packaging is similar as well.

Performance isn’t a problem nor is styling. But there are two areas which can still be a problem. Pricing and size/speed options. For options, the Venom kits are available with or without the RGB which is nice. All of the RGB kits are 32GB dual-channel 2x16GB kits, which could be expanded on a little with 2x23GB options at least. You get three clock speeds with 5600/6000/6200 MHz options and the kit we tested is the fastest of those. The black non-RGB kits are available in the same size and speeds as well as a fourth option with is a dual-channel 2x8GB 16 GB kit running at 5600 MHz. I’m surprised that kit doesn’t also have the RGB option. Beyond that, the 6200MHz kit has a CAS latency of 40 which is a touch higher than some of the options that are available for sale right now with 36 and 38 CAS Latency being options from a few companies. Beyond that for pricing the kit I tested today is selling on Newegg right now for $399.99 which is $130+ more than a stock clocked DDR5 kit. But is right in line with at least one competitor and cheaper than some of the others. The non-RGB kit is even cheaper at $369.99. That is $30 bucks saved if you don’t have interest in the lighting, that’s not a bad deal. 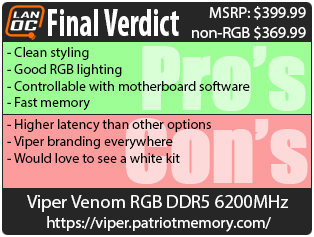 You might call him obsessed or just a hardcore geek. Wes's obsession with gaming hardware and gadgets isn't anything new, he could be found taking things apart even as a child. When not poking around in PC's he can be found playing League of Legends, Awesomenauts, or Civilization 5 or watching a wide variety of TV shows and Movies. A car guy at heart, the same things that draw him into tweaking cars apply when building good looking fast computers. If you are interested in writing for Wes here at LanOC you can reach out to him directly using our contact form.
Discuss this article
Log in to comment
Posts in discussion: Viper Venom RGB DDR5 2x16GB 6200MHz

We have 1436 guests and no members online