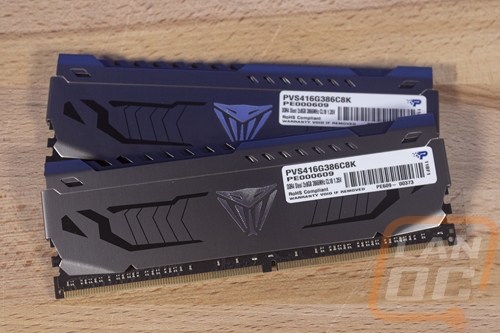 Patriot Memory s gaming focused brand is called Viper Gaming and in the past, I’ve had a few of their peripherals come into the office to check out but it was only recently when I had Viper Gaming RAM come in. I was curious about what they are doing to set their gaming lineup apart from the normal Patriot Memory RAM. They sent over their Viper Steel 2x8GB kit which is running at 3866 MHz. The Viper Steel lineup uses a simple styling that avoids the flashy lighting that a lot of other kits use and is available in up to 4400MHz which is the fastest kit in the Viper Gaming lineup. The kit I’m checking out today isn’t as fast as that 4400MHz kit but I’m excited to take a closer look at the new styling and see how our 3866Mhz kit performs as well.

So the packaging for the Viper Steel kit sticks with the same theme as the kit itself. That includes black and various shades of grey design with Viper Gaming logos in the background. There are renderings of the memory on the front and then down below that the Viper Steel branding. If the Viper name, Viper logo on the renderings and in the background wasn’t enough they also have the Viper Gaming logo in the top left corner with the only use of color to help it really stand out. The model details are all in the top right on a sticker that can be changed from model to model. Our kit is the 2x8GB 16GB kit running at 3866MHz. I’m surprised they also didn’t include the timings on the sticker as well though. Around on the back, the model name is on the small barcode sticker in the bottom right. They have all of the different social media names listed. Then the rest of the back is basically filled with a short description repeated over and over in 9 different languages. They do touch on the lifetime warranty with a small logo in the bottom corner, to me that is something I would want to put on the front to really get peoples attention. 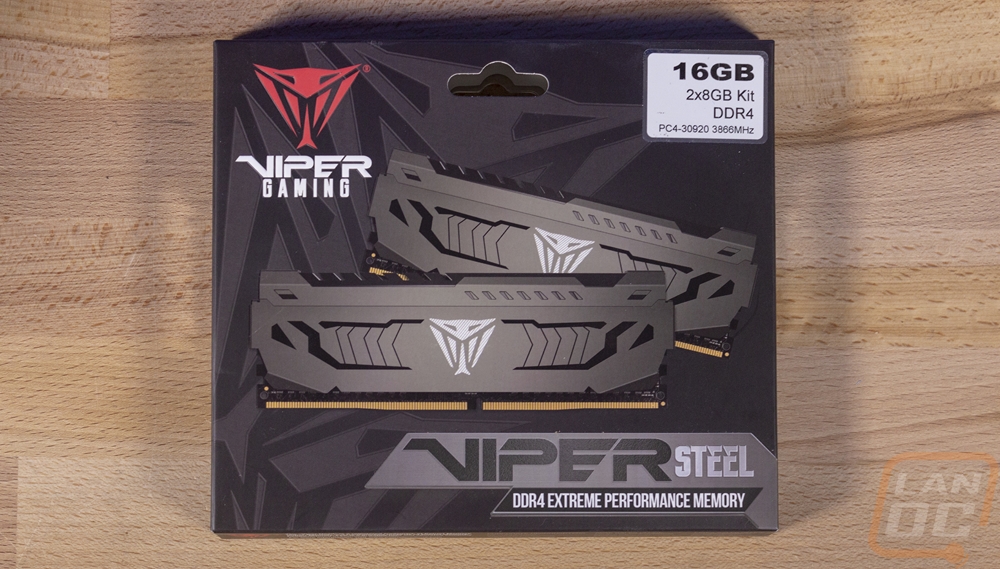 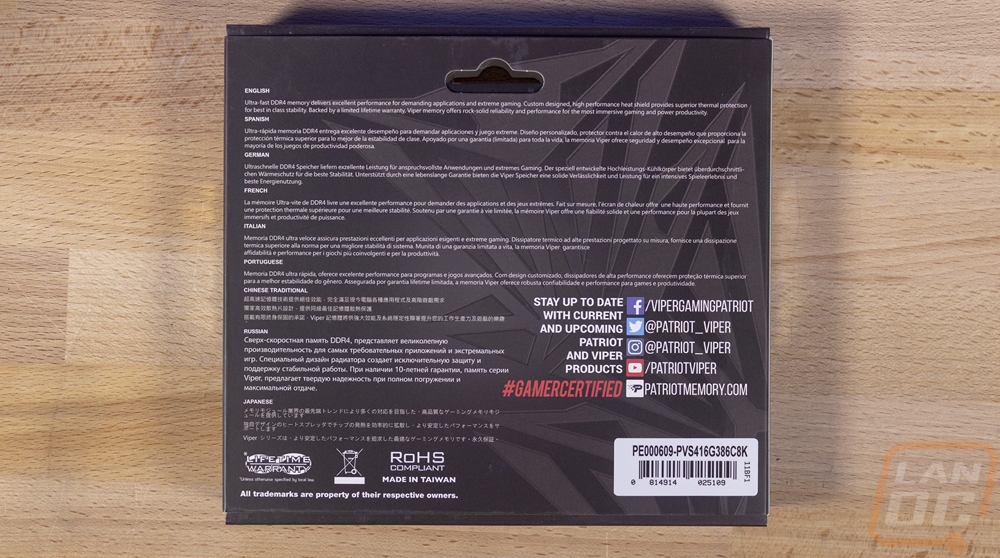 Inside the box, both sticks of RAM come in one clear plastic clamshell tray. They also included two Viper logo stickers as well. 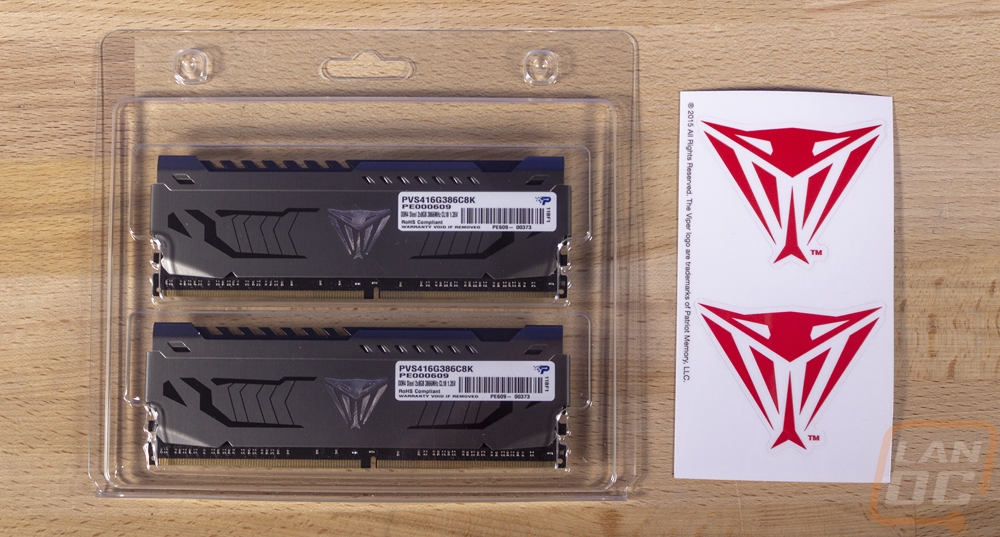 Both sides of the heatspreader on the Viper Steel kit are the same and the heatspreaders are made out of stamped aluminum with a brushed finish. There are small winglets down on the bottom that are slightly bent in which line up with the black screen printed design that runs across the middle of the heatspreader. In between those are Viper Gaming logos with a machined aluminum finish. 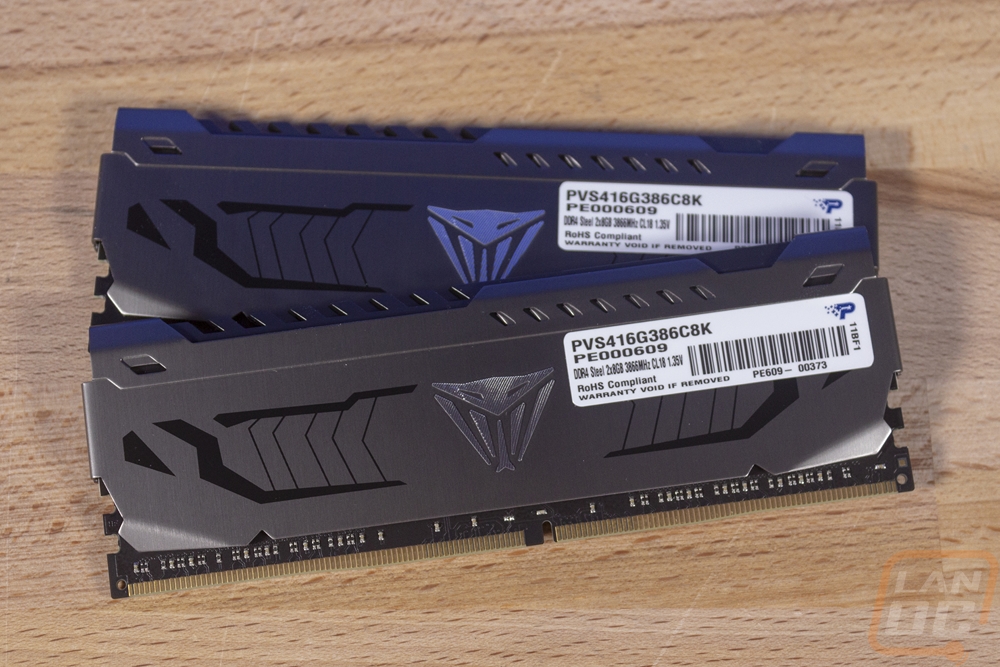 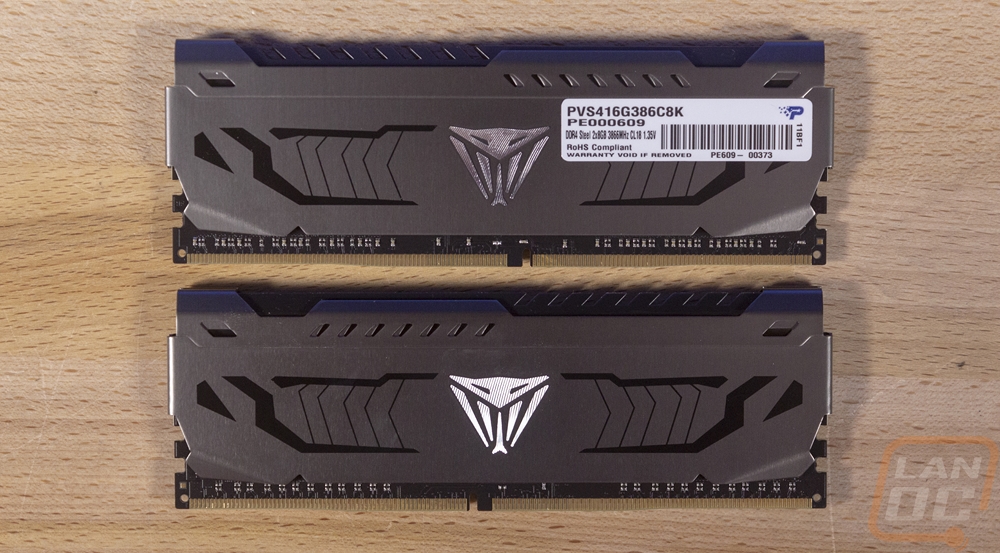 Up at the top, the stamped heatspreader bend in and have a few small vent holes cut in them. That area is bent up and over a black insert, this ties the two heatspreaders together and matches the screen printing on the sides with its anodized black finish. The top part has notches cut into it on one half and Viper branding on the other. It’s the top insert that really brings the whole look together, without it the two grey heatspreaders would have that older styling, but altogether I really dig the look. It would go especially well with the Asus Strix lineup but the gray with black trim look should match almost any build.

For performance testing, I installed the Viper Steel kit on our X299 test bench and ran through our test suite. Memory when it comes to performance testing is mostly a numbers game. The clock speed and timings make most of the difference with the capacity and number of sticks play roles as well, especially when it comes to jumping up to quad channel kits on X299 and Threadripper. Our specific kit is clocked at 3866 MHz while running the XMP settings with 18-22-22-40 for timings. For comparison the Dominator kit I tested previously was at a slower clock speed (3000MHz) but had much better timings (15-17-17-35) and the Ballistix Elite kit tested was a quad channel kit, this should give you a better idea of how timings, clock speeds, and single/dual/quad channels change performance. So because of the clock speed, this was the second fastest kit tested when it came to pure read speeds and to a lesser extent the write speeds, but copy speeds were a little lower.

The latency graph, on the other hand, is determined by both the timings, especially the CAS Latency number and the clock speeds. You can see the Dominators did well with their great timings but were still a little behind the Viper Steel kit.

Now memory performance can affect CPU performance, this is especially true with Ryzen which the infinity fabric ties the memory controller in with the timing of the CPU. To check how the kits do with this I ran Cinebench R15 where I did both the single core and multi-core tests and you can see that the timing of the Dominator kit well dominated here but the Viper Steel kit did really well as well. High bandwidth with the quad channel kits didn’t really help here with the exception of the single core test. 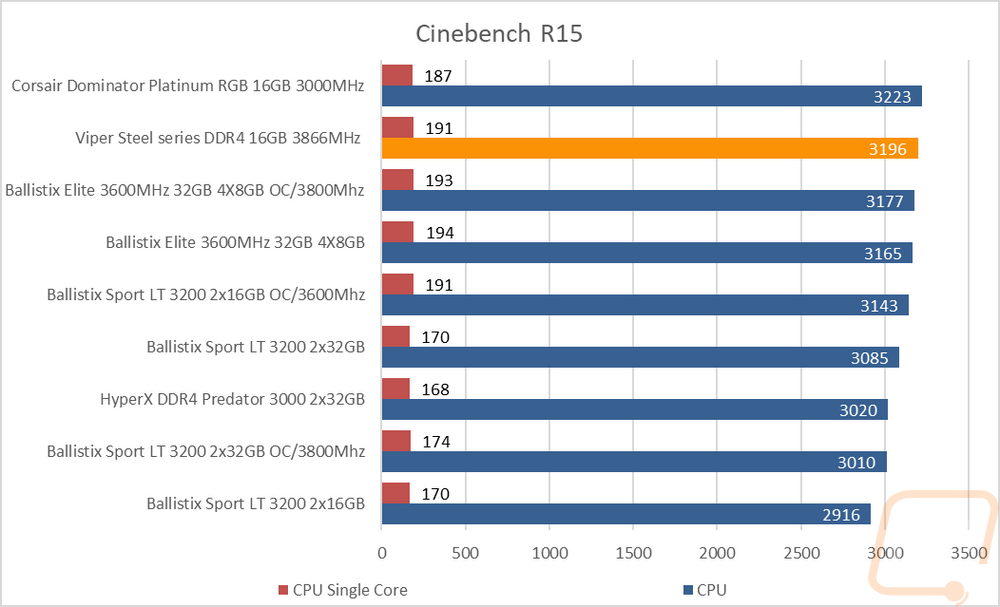 My last test is just an overall benchmark the Passmark Performance Test 9 Memory Mark test. This is just a portion of the normal Performance Test 9 benchmark but I like it because it is a combination of a lot of tests. They look at read and write speeds like we did as well as uncached tests. It also takes into account the total ram available and does a latency test. The threaded memory test looks at overall bandwidth and how the memory handles when operations get stacked up. Then there is a database operations test. Passmark then combines all of those results and puts them into an overall score. I’ve found that this does tend to favor memory capacity as you can see the 32GB kits score a little higher than the 16GB kits. But even looking at the 16GB kits I was surprised to find the Dominator kit as low as it was. The Viper Steel kit did well here when just compared with the other 16GB kits.

The last thing I took a look at was overall thermals. To do this I ran AIDA64’s stress test with the Stress system memory option. I ran the test for a half hour then took a look at the kit with our thermal camera. Unless you are overclocking, most memory don’t have too much of a problem staying cool, but I wanted to see if the heatspreader design was doing a good job of pulling the heat away from the memory and to look for any hotspots. The end result? Well as you can see that even after being stressed for a while things didn’t really heat up much. The sides which contact the RAM directly were a little warmer but only by a few degrees so that heat is transferring up into the thicker top section and the hotspots were only 3 degrees over the rest of the memory. You can see in the background how the VRMs on our motherboard are MUCH hotter, like I said memory cooling isn’t a big concern at stock voltages. 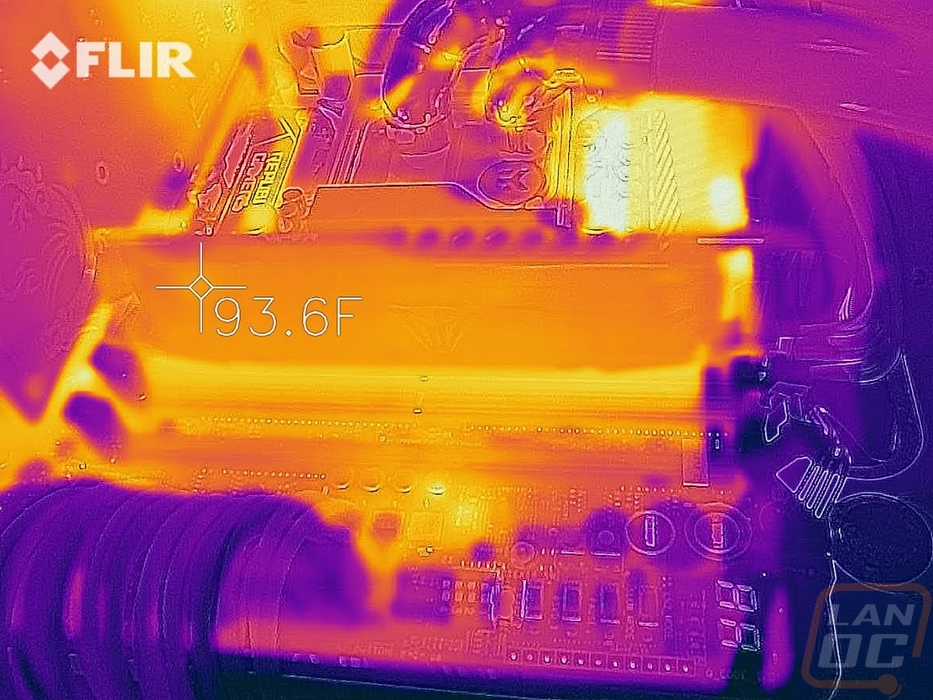 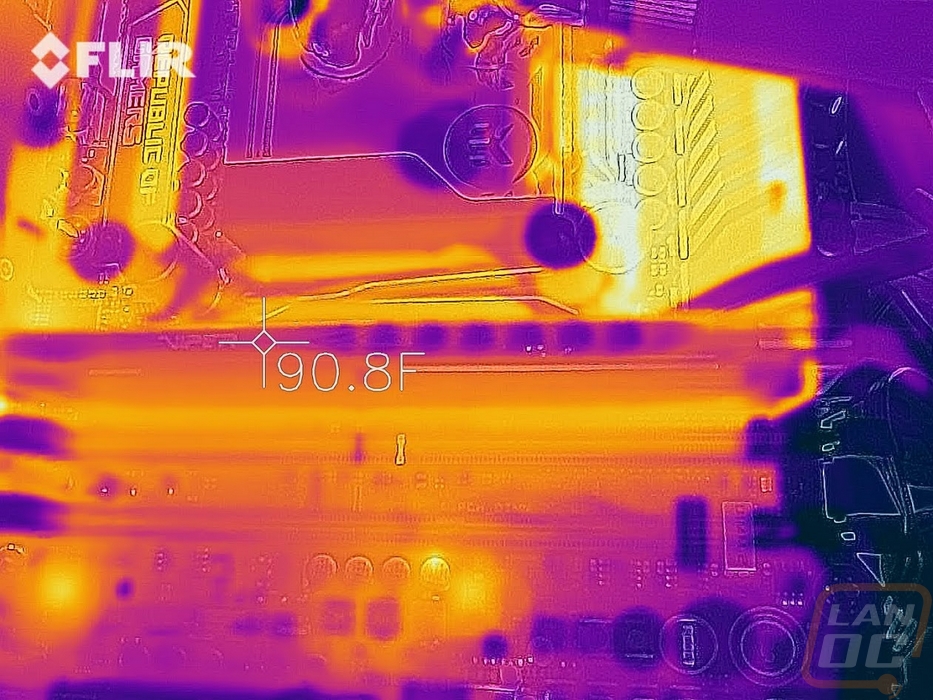 The last Patriot Memory kit we have had in the office was YEARS ago but it is still to this day one of my favorite looking memory kits. Seriously check that kit out! Now over the years, memory has become more and more of a commodity but with Ryzen taking advantage of memory speeds the interest and need for faster memory has come back around. In addition to that, the push for RGB memory reignited some interest in making sure you have a kit that you like or in the case of the Viper Steel kit I’ve been taking a look at, the lack of RGB might be one of its best features. The grey finish with black trim matches the look almost every motherboard manufacturer has been going with, color neutral to let the RGB lighting do the work. In this case, you can save money by not overspending on an RGB kit and get a kit that still matches your build and frankly looks good as well.

Patriot Memory has created the Viper Gaming lineup which the Viper branding has been part of Patriot Memory forever, even that Tri-Channel kit I took a look at years ago was a Viper kit. The gaming line, however, lets them brand with that “gaming” look and I hate to have to put it in quotes but it is a bit of a meme at this point. However in this case that just means a clean look built around a quick kit. The Viper Steel lineup has their fastest clock speeds available. The 3866MHz version they sent over to test wasn’t in that fastest category, but it is still a fast kit. In fact, it outperformed a lot of other kits in my testing and at least a few of those cost significantly more than this kit.

That leads me to the main feature of the Viper Steel kit. Patriot Memory has these priced well. They aren’t available on Newegg from what I can see, but you can get this exact kit for $119.99 on Amazon. The next cheapest kit with the same clock speed and 2x8GB configuration is the Trident Z kits from G.Skill which run $172.99. That is a huge gap. Really the only downside and part of the reason for the price gap is all of the other 3866MHz kits have a little better timings. In fact, if you run through some of the other clock speeds on PCPartPicker or on Newegg and Amazon you will find that the Viper Steel kits are the cheapest at all of the speeds that you can get them in up in the higher speeds like 4000MHz, 4133MHz, and 4400MHz. They don’t compete with some of the entry-level kits, but the Viper Steel kits are a little bit of a hidden gem in the higher clock speeds. 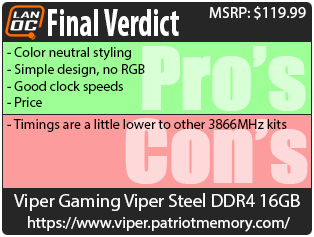 You might call him obsessed or just a hardcore geek. Wes's obsession with gaming hardware and gadgets isn't anything new, he could be found taking things apart even as a child. When not poking around in PC's he can be found playing League of Legends, Awesomenauts, or Civilization 5 or watching a wide variety of TV shows and Movies. A car guy at heart, the same things that draw him into tweaking cars apply when building good looking fast computers. If you are interested in writing for Wes here at LanOC you can reach out to him directly using our contact form.
Discuss this article
Log in to comment
Posts in discussion: Viper Gaming Viper Steel DDR4 16GB 3866MHz

We have 1818 guests and one member online