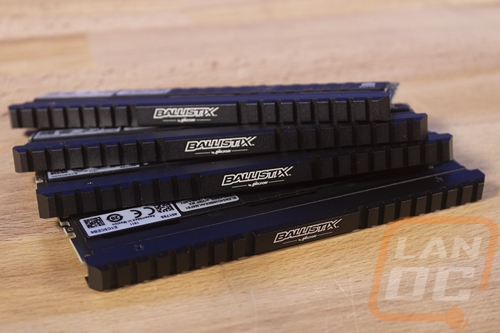 Having spent time with the Ballistix Sport kits a while back it was a nice change to check out the Ballistix Elite 3600 MHz kit. The Sport kit looked good but was a little dated looking with its heatspreader design where the Ballistix Elite kit doesn’t hold back on its heatspreader design. In fact, just holding the kit in hand and feeling the overall weight makes the difference clear and that is before you even look at the kit. The Ballistix Elite kit is a big step up in aesthetics, I love their all blacked out design that isn’t in your face or flashy. Being black also means they will match nearly any build, especially with most motherboards being black or dark grey. Of course, the heatspreader design doesn’t have much to do with performance other than cooling to a small extent but the Ballistix Elite 3600 MHz kit ended up performing extremely well. The 3600 Mhz clock speed helps a little with that but you can still get 4x8GB kits at that clock speed, it’s the timings though that stand out. Just about everything else on the market (in comparable capacity/density) is running a CAS latency of 18 where this kit is running at a CL of 16 and that is where this kit stood out. This showed in the performance testing though it did hurt the kit in our overclocking testing. The Ballistix Elite kit is very capable of overclocking though once the timings are loosened up but even at these the kit did still have a little room left.

My only complaint about the kit overall was with its pricing and even that comes with some caveats. The kit tested running at 3600 MHz with a 4x8GB configuration for 32GBs is selling for $385.99 on Newegg and Amazon. When sorting out competing kits at the same clock speed, capacity, and density the Ballistix Elite kit looks a little expensive. You can even find a kit at about half the price. When looking closer though you will notice all of those have significantly worse timings. That $192 kit is running a nasty 18-22-22-42 vs the 16-18-18-38 of the Elite kit. So the timings push this up in with the expensive RGB and gold plated 3600MHz kits but it trades all of that bling for better performance. So it's an expensive kit, but the price is at least partially justifiable. 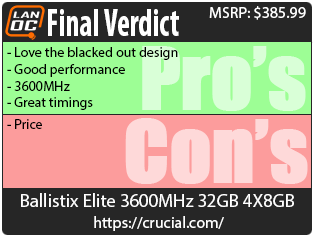 You might call him obsessed or just a hardcore geek. Wes's obsession with gaming hardware and gadgets isn't anything new, he could be found taking things apart even as a child. When not poking around in PC's he can be found playing League of Legends, Awesomenauts, or Civilization 5 or watching a wide variety of TV shows and Movies. A car guy at heart, the same things that draw him into tweaking cars apply when building good looking fast computers. If you are interested in writing for Wes here at LanOC you can reach out to him directly using our contact form.
Discuss this article
Log in to comment
Posts in discussion: Ballistix Elite 3600MHz 32GB 4X8GB

We have 734 guests and one member online