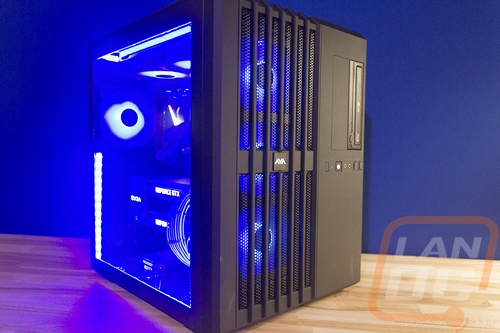 So like I said in the opening, buying a pre-built computer isn’t going to be for everyone. A good part of PCs for me is building them, but there are lots of people who want the same crazy looking custom builds that enthusiasts have but they don’t have the time, interest, or knowledge needed to get them without buying one. So there is a need for companies like AVADirect. Hell, look at just how many of the boutique builders are still around.

So the Avant Mid-Sized that they send us is a bit of a monster. The two GTX 1080 Ti’s and the i7-7700K overclocked are more than enough to handle just about anything you throw at it. If gaming is your goal you aren’t going to have to worry about performance for a long time and the Corsair 540 Air case that they went with is still one of the better-looking cases to build in. It really helped show off the great wiring that AVADirect did with the individually sleeved blue cables they used. The only issue I ran into was that a few of the CPU specific tests were a little lower than my stock clocked results and I think that is because of the memory clock speeds. The temperatures on the CPU were a little high, but the i7-7700K always runs warm, especially when overclocked. The water cooling helped keep things in check enough to not worry about it though.

The parts they went with isn’t too off the wall. I think in this price range I might also be considering a Ryzen 7 CPU as an option to open up, even more, multi-threaded performance. Beyond that, I would drop the BluRay drive and bump up the capacity on both the SSD and Hard drive a little more. I would also be looking for a 2666MHz kit or faster on the memory side. With those changes, I could see myself running a very similar setup.

Knowing the part list is solid, the performance is good, and the wiring job looks great is all good to know. But I’m sure you guys are wondering how much of a premium are you paying to avoid building this yourself?

Using PCPartPicker and getting the lowest possible prices for the exact components used in this build put be at a total of $3663.76. The receipt for the build was priced at $3,849, and when I repriced out the same build just now I’m seeing $4211. With video card, NAND, and DRAM shortages I’m not all that surprised that the price is different. I should note that my order and my build didn’t include a windows key so you will need to pick that up as well. While not cheap, I don’t think the markup that AVADirect is asking for their work is bad. They put together a solid build, did an amazing job with the wiring, and even overclocked the CPU. All of the extra accessories and components are all shipped with the build and unlike PCs from OEMs like Dell you aren’t going to have to worry about being able to upgrade later. Just like a normal custom build you can change out components, swap your case, or even add custom water cooling later. 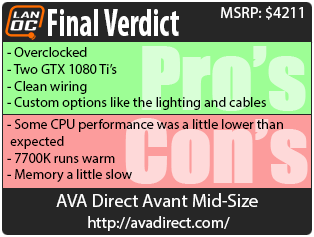 You might call him obsessed or just a hardcore geek. Wes's obsession with gaming hardware and gadgets isn't anything new, he could be found taking things apart even as a child. When not poking around in PC's he can be found playing League of Legends, Awesomenauts, or Civilization 5 or watching a wide variety of TV shows and Movies. A car guy at heart, the same things that draw him into tweaking cars apply when building good looking fast computers. If you are interested in writing for Wes here at LanOC you can reach out to him directly using our contact form.
Discuss this article
Log in to comment
Posts in discussion: AVA Direct Avant Mid-Size