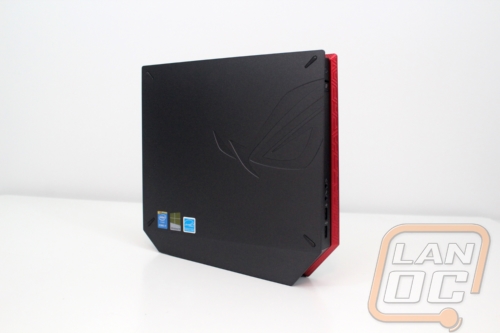 My testing of the ROG GR8 consisted of running it through a few of our favorite benchmarks and then the true test was taking it out to a few LAN events. Before I get into how well it worked in real life situations let’s take a peek at the performance numbers. I included results from our Lunchbox 3 build when possible as well as our coverage of the Intel NUC (Ivy Bridge i3 model) and in a few cases the MSI Nightblade barebones build as well. The GR8 isn’t exactly a great comparison to a full build like the Lunchbox 3 when we just look at components because it does run a laptop CPU in the Intel Core i7 4510U. For its GPU Asus included an Nvidia  GTX 750Ti 2GB. This is a step down from our Lunchbox and Nightblade builds but from our past experience with the 750Ti it is still a good GPU.

In PCMark 8 the GR8 pulled out ahead of our NUC in both tests and had a respectable score but as expected fell behind the full sized builds. Testing in wPrime was similar with a score much better than our Intel NIC. In Passmark things were a little slower but I think part of that is related to the decision to only use a hard drive in the GR8 where the other three PCs has SSDs for their main drives.

Where I started to get realty interested though was in the testing that included the dedicated GPU in the GR8. In Heaven benchmark it pulled close to the Nightblade and in 3DMark the numbers blew the NUC without a GPU out of the water. It didn’t pull the numbers the Lunchbox did but it also has a laptop CPU and the slower hard drive. Specifically when looking at the results the Lunchbox had more than double the Physics score (10379 vs 4094) showing the CPU to be the main limitation. That said the numbers we did see are still more than enough to game on.

Here we can finally see how well the hard drive in the GR8 performs, while it isn’t bad for a hard drive it is still a huge difference from running an SSD.

Much like a gaming laptop, packing all of the power that is in the GR8 can mean a lot of heat. So when doing my testing I did load the CPU in Prime95 and keep an eye on its thermals. While it didn’t run as cool as our much larger more open Lunchbox 3 it did perform really well. Under load I saw a peak of 59 degrees. Frankly there are a lot of full sized PCs that can’t stay that cool, Asus did a great job handling the thermals here to keep it all under control.

My last test was to use out Kill-A-Watt and check to see just how much power the GR8 pulled. Starting at idle I saw 19 watts. When running the heaven benchmark I was very surprised to see that the entire PC only pulled 62 watts. Just to give you an idea of how impressive this is, I hooked up the 23 inch monitor that I was using to test the GR8 with and it pulled 38 watts itself. In other words the entire PC under load pulls less than double of the wattage of a standard LCD monitor. All together you can expect to pull right at 100 watts with the GR8 and monitor together. At that rate imagine how many PCs you could run on one circuit! The low power should mean you won’t run into power issues at LANs but even at home you won’t be running up your electric bill.

So now that we have seen the performance numbers would you expect the GR8 to be a great LAN rig? Well its funny actually. I ran all of our tests and then my wife used the GR8 at three different LAN events. Had I looked at the results before using it I would have been a little worried about it playing a few games but in all of her gaming she was able to play anything she wanted. Sure it’s not a high end build with multiple video cards, but this is one of those situations where being able to play the games was all we needed, playing them at 120+ FPS wasn’t needed. I will say though that the hard drive did become a major pain in the butt. This made for slower boot times, slow game installs and updates, and overall the PC felt really sluggish. It’s funny our NUC has a slower CPU but an SSD and jumping between the two is night and day. If Asus bundled an SSD in the GR8 it would be a huge improvement.

Where the GR8 really stood out though was just how small and easy to transport it was. It actually fit in the front pocket of my wife’s LAN bag so she just had to take the one bag in and she had her PC, monitor, peripherals, and a bunch of backups for people who have issues. When you have the GR8 setup it opens up additional space (that I quickly took over). It might not have been the fastest PC at our table, but it was in the middle of the pack and a hell of a lot smaller, quieter, less power hungry, and convenient than the rest.

We have 1089 guests and one member online