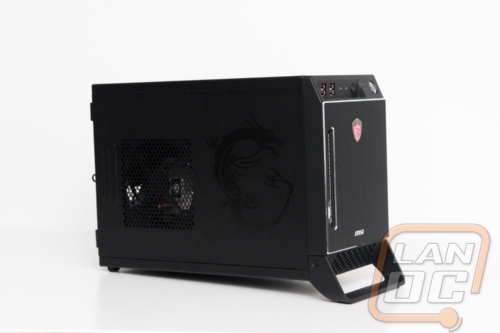 What really sets the Nightblade apart from any other barebones on the market is the fact that this is built specially to be a LAN rig. MSI made it easy to carry with a built in handle and with its large PSU and room in the video card area you can run extremely high end video cards. Most of my personal LAN rigs have to rely on smaller ITX focused video cards, but not being limited to that opens up cheaper and faster options or you can go to the high end and toss in a 290X or GTX 980. Really, when you pair the Nightblade up with a high end video card and an i7-4790 you really shouldn’t even need a full sized PC. When you go to build in the Nightblade you really only need to set aside 20 minutes or so, I built ours in less than a half hour including taking time to photograph everything. As long as you have a good internet connection to download your windows updates and games, you could get this in on a Friday afternoon and be ready to LAN it up that night.

The Nightblade isn’t perfect. It was a little on the heavy side compared to my other Mini-ITX builds for one. This didn’t end up being a huge deal, because it is still an improvement over full sized PCs, but it is worth noting. Although the entire outside of the case is painted black, the interior isn’t. It’s a little weird that they painted so much but skipped out on just a few panels. While there isn’t a window to even look in and see, it would have looked great in combination with the black cables with red connectors on the power supply. Along those same lines, I also found the exterior a little easier to scratch than I would prefer. If you end up taking yours to a lot of events, you can expect to see a fit battle scars on it from use.

So as a barebones, where does the Nightblade fall budget wise? Well to build basically the same PC as what I tested with you are looking at about $1100, with $450 of that going to the Nightblade itself. You could actually save a little money by dropping down to an i5, go with the Nightblade without the DVD drive, slightly cheaper 240GB SSD, and an MSI R9 280 and you would come out almost $200 cheaper and actually have better gaming performance.  That puts the total cost there at about $900 + OS, not a bad price if you ask me, especially when you consider that over half of the installation is already done for you. 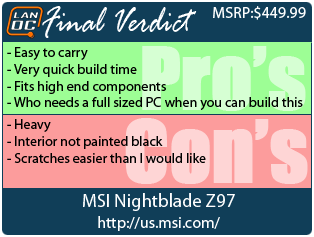 You might call him obsessed or just a hardcore geek. Wes's obsession with gaming hardware and gadgets isn't anything new, he could be found taking things apart even as a child. When not poking around in PC's he can be found playing League of Legends, Awesomenauts, or Civilization 5 or watching a wide variety of TV shows and Movies. A car guy at heart, the same things that draw him into tweaking cars apply when building good looking fast computers. If you are interested in writing for Wes here at LanOC you can reach out to him directly using our contact form.
Discuss this article
Log in to comment
Posts in discussion: MSI Nightblade Z97