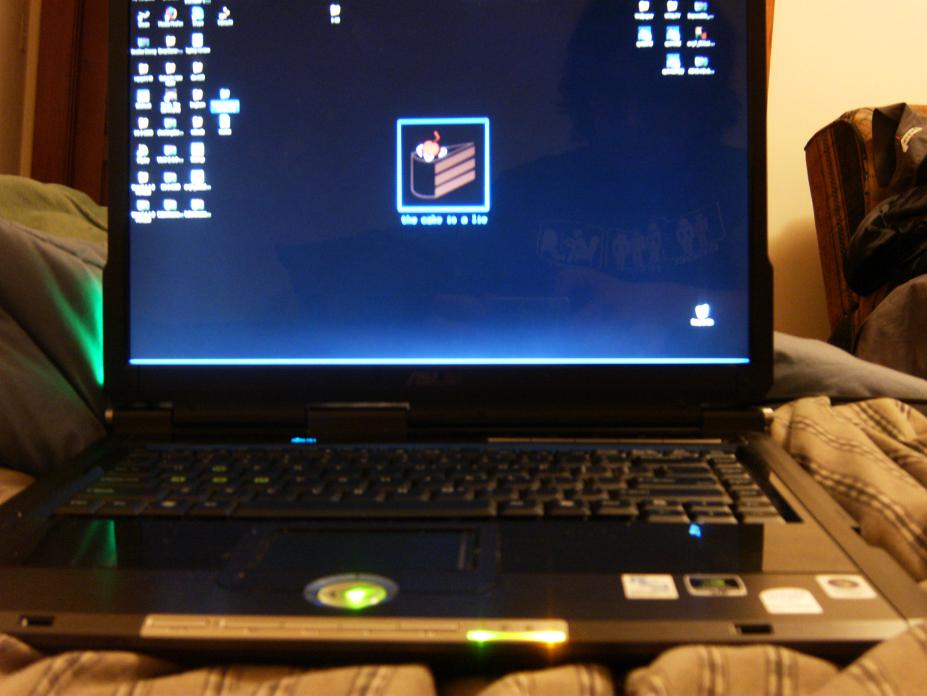 The Asus G1S series came out around late 06 early 07. Back then it was billed as a " Budget gaming notebook". So how does that claim hold up 1 year later? It seems the term "gaming laptop" has been reserved for only the most über overpowered machines , because this laptop still kicks ass in my opinion. Later on I will give my impressions on how it handles games and the pros and cons of the notebook.

This notebook is dead sexy. Every so often I find myself going Holy **** this notebook looks awesome. The outside casing of the laptop is a smooth , glossy , carbon fiber-esque design in black with a silver Asus logo in the middle. On the inside is a brushed metal palm rest and the same black glossy plastic all around. There is also a subtle accent of green around the webcam , the side lights , and the backlight of the jewel near the mouse. The screen is 15" and runs in a jaw dropping resolution of 1680 x 1050 native. The screen is so crisp but the brightness could be a bit better. Along the top edge of the keyboard are the media buttons that are included in almost every keyboard / notebook created since the dawn of time , but to the left of these buttons is quite a nifty feature. A tiny LED screen that on default will display the time and battery status. Now on to the "giddy school girl part" ... Asus provides you with a program to customize the display. Sure it is simple , but I get quite a kick out of being able to scroll custom icons and text in any font I want across this little screen for all to see. I also want to mention the keyboard. It has a very stiff tactile feel to it. Like I am typing on a real keyboard and not those spongy failure keyboards that most notebooks come with. Unfortunately there were 2 things that are a pain about this laptop. In keeping with the slick and stylish look the speakers are located on the bottom edge facing down. This makes everything sound like its in a hallway. The second problem was all the usb ports are grouped in the back ins a 2 x 2 square. This can make it hard to actually have 4 devices plugged in at the same time. Other than that this is a very well built notebook.

My model has been a little difficult to research since I can't find any proof of its existence. It has the same exact specs of the Asus G1S-A1 except the processor is a T7300 clocked at 2.00 Ghz instead of 2.2 Ghz. You can find more detailed specs at https://usa.asus.com/products.aspx?l1=5&l2=61&l3=416&l4=0&model=1674&modelmenu=2 since i cannot find an easy way to import the table into this review. Instead I will just graze over the basics. Intel® Core™2 Duo Processor T7500 2.2 GHz, 800 FSB, 4MB L2 Cache ( mine is clocked at 2.0 ) 2 GB of Ram NV 8600MGT 256MB (GDDRIII) (DX10) 160 gb hdd 6.8 Lbs ( I love this part .. its so so so light for a notebook with a dedicated video card) The Performance - When I read reviews for this laptop I see horrible real game tests. Half of them instantly go to F.E.A.R .. hit auto detect .. and do the benchmark. Sure that works for them because they have to review the performance but in the end all you end up knowing is that it can play F.E.A.R. The funny thing about these reviews is they always end up in the 1024 x 768 a non native res that looks like ass. I give this laptop my thumbs up of approval in gaming. Sure I haven't been able to run it through hell .. aka Crysis but I have given it a fair amount of stress. TF2 or any Source game - 1680 x 1050 res , Everything high , no AA , no Filtering . Avg of 80 fps Silverfall - 1680 x 1050 res , Everything high , no AA , no filter -- very playable The Club - 1680 x 1050 res , Everything high , no AA , no filter - playable but the motion blur is annoying Bioshock - 16080 x 1050 res , Everything high , no AA , no filter , no DX 10 - very playable The Value - Now I haven't been able to find my exact model for retail but I can assume it is still selling anywhere from $1400 to $1600 still. I managed to snag mine on clearance at a Best Buy for an even $1200 which I feel was an amazing deal. Would I pay the full price? Absolutely! Asus has crafted a very solid notebook with very few flaws. I would recommend this notebook to just about anyone who wants a laptop that can do just about anything and game on top of that. I give this laptop

You might call him obsessed or just a hardcore geek. Wes's obsession with gaming hardware and gadgets isn't anything new, he could be found taking things apart even as a child. When not poking around in PC's he can be found playing League of Legends, Awesomenauts, or Civilization 5 or watching a wide variety of TV shows and Movies. A car guy at heart, the same things that draw him into tweaking cars apply when building good looking fast computers. If you are interested in writing for Wes here at LanOC you can reach out to him directly using our contact form.
Discuss this article
Log in to comment
Posts in discussion: Asus G1S