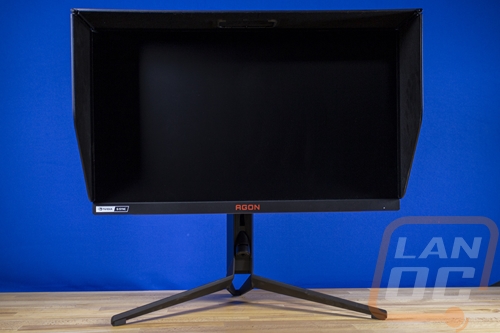 AOC certainly stepped things up with the Agon Pro AG254FG and they are focused on esports with the AG254FG which supports their partnerships with companies like G2 esports, ESL, Riot Games, and in the past Red Bull. The Agon Pro AG254FG is going to be a solid choice with just its 360 Hz refresh rate, but AOC didn’t’ stop with just that. It is a full G-Sync monitor and they use the G-Sync processer to also add in Nvidia Reflex Analyzer which can test your mouse latency when using the reflex USB port in the USB hub built into the Agon Pro AG254FG. You also get ultra low latency mode which can improve your gaming performance in shooters. The AG254FG is a DisplayHDR 400 capable display and the 1080p resolution may sound low to some but is the only way you are going to be able to get the performance needed to take advantage of the 360 Hz refresh rate.

The esport-specific features can also be seen on the outside of the Agon Pro AG254FG which includes an add-on hood to help with studio lights and the built-in headphone stand. The stand itself has a lot of adjustability including being able to rotate the Agon Pro AG254FG into vertical mode if that is what you prefer without interrupting the logo projector built into the stand. The OSD menus are easy to use which is good in an esport environment because it will be new people using the monitors often and the Agon Pro AG254FG also comes with a wired remote that they call the OSD pod. For home use, it does also include VESA mount support which is something I wouldn’t be able to go without.

The Agon Pro AG254FG isn’t perfect and while the display performed extremely well in my testing across the board. I did have some light bleed in the bottom left corner. My other nitpick or complaint would be that some of the RGB lighting is useless. Specifically, the bottom-mounted light bar which isn’t visible unless you are looking up from below the monitor, in some displays that have had a similar light bar it would glow under the monitor but I couldn’t see it at all on our table, especially with the Agon logo projector. I personally don’t find the back RGB accents very useful as well because my desk is up against a wall but I do understand that some office setups will be visible and with the esport focus that lighting would be visible when used on stage.

My other complaint on the Agon Pro AG254FG was its price. With an MSRP of $699.99 and even with it currently selling for $649 on Amazon, it is expensive. That isn’t to say you aren’t getting a great monitor because the Agon Pro AG254FG is. But there are other 24-25 inch monitors with a 360 Hz refresh rate like the PG259QN which is currently $480, MSI has one for $403, and even Alienware which is known for higher prices is $409. You do get the hood with the AG254FG but that doesn’t justify the additional cost. So for the AG254FG, it is a great monitor but keep an eye on pricing. AOC is normally on top of pricing so I imagine that we will eventually see the AG254FG being competitive there. 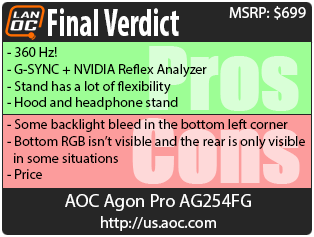 You might call him obsessed or just a hardcore geek. Wes's obsession with gaming hardware and gadgets isn't anything new, he could be found taking things apart even as a child. When not poking around in PC's he can be found playing League of Legends, Awesomenauts, or Civilization 5 or watching a wide variety of TV shows and Movies. A car guy at heart, the same things that draw him into tweaking cars apply when building good looking fast computers. If you are interested in writing for Wes here at LanOC you can reach out to him directly using our contact form.
Discuss this article
Log in to comment
Posts in discussion: AOC Agon Pro AG254FG

We have 1644 guests and one member online