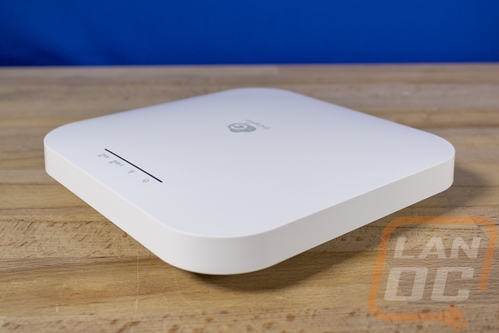 To test the new ECW220S EnGenius sent over the access point and along with it a POE power injector to run the access point without a POE switch. The boxes for both devices are similar in that they are sticking with a basic brown box look like most enterprise-focused products do. The ECW220S has the EnGenius Cloud logo in the middle of the front with the model name in the bottom right corner and a note about being Facebook Wi-Fi enabled in the bottom left corner. The bottom edge has a sticker with the UPC and barcodes for the EAN and the serial number. They also have more detail printed down here mentioning that this is a Dual Band Wi-Fi 6 2x2 indoor access point. 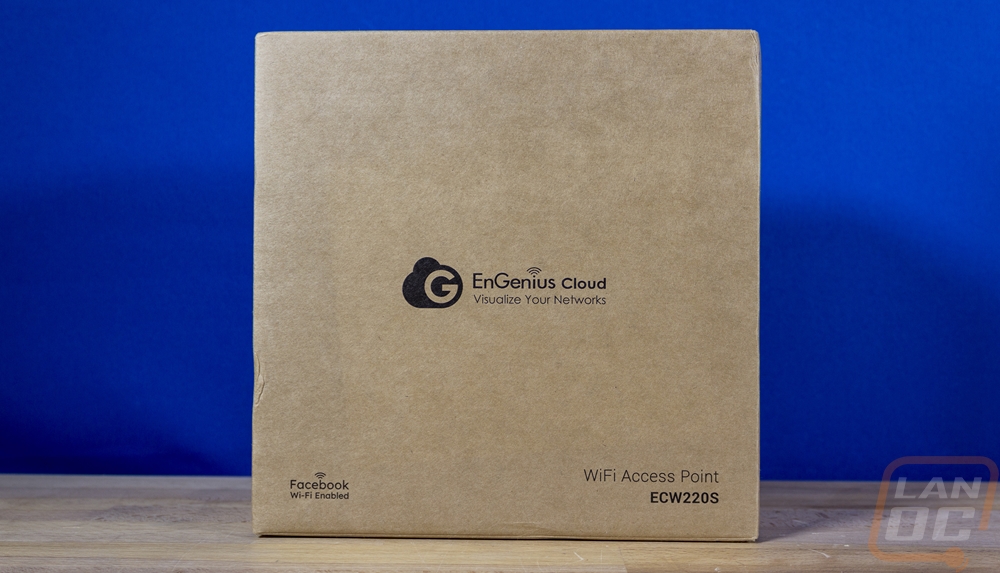 The ECW220S sits inside of the box with a formed recycled paper tray along with the AP itself in a plastic bag to prevent any scuffs. They have a small paper with EU compliance notes and up under the AP, there is also a small folded up guide. There is also a box of accessories that come with the ECW220S which is the same setup that the ECW230 came with. You get two mounting brackets. One has wall or ceiling mounting holes and then both have different sized clips for attaching to drop-down ceiling grids. The mount with the holes supports 15/16 inch ride rails and the other supports 9/16 rails. There is also a small bag with two screws and drywall or brick mounts. 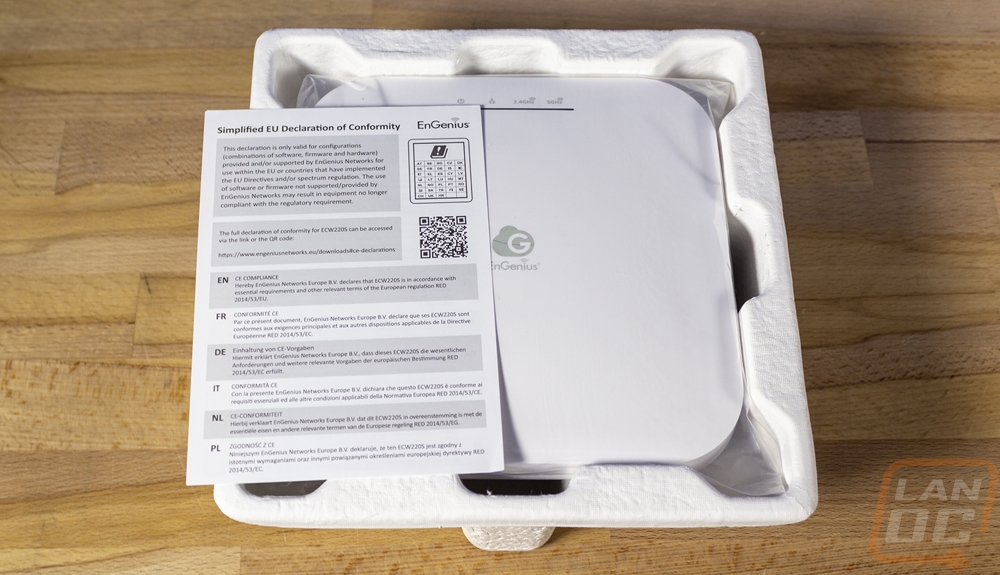 The box for the POE injector is similar with the front having a line drawing, EnGenius logo, and the model name all in the middle of the front of the brown box. Then on the back, the POE Adapter has a set of instructions that show how to put it in line with the ethernet and to plug it into the power. 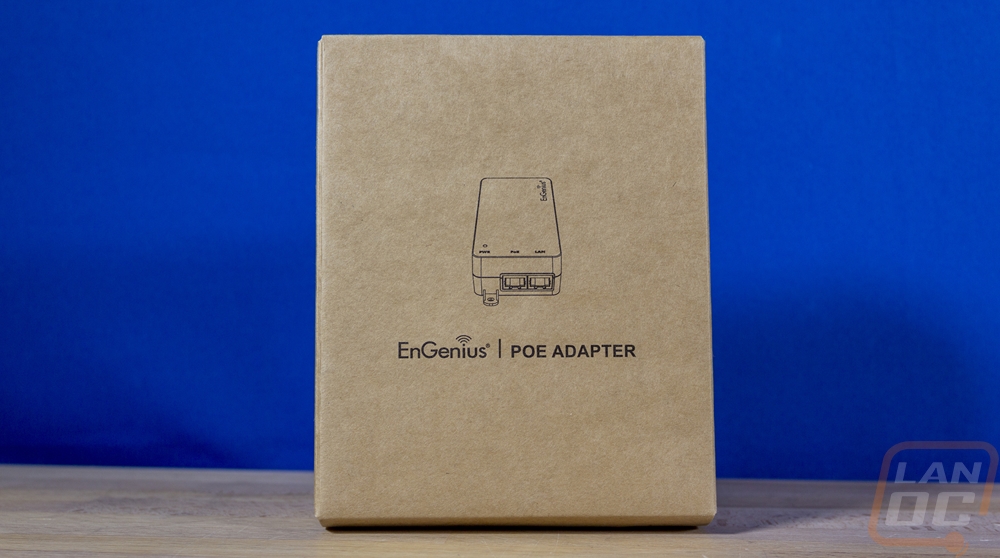 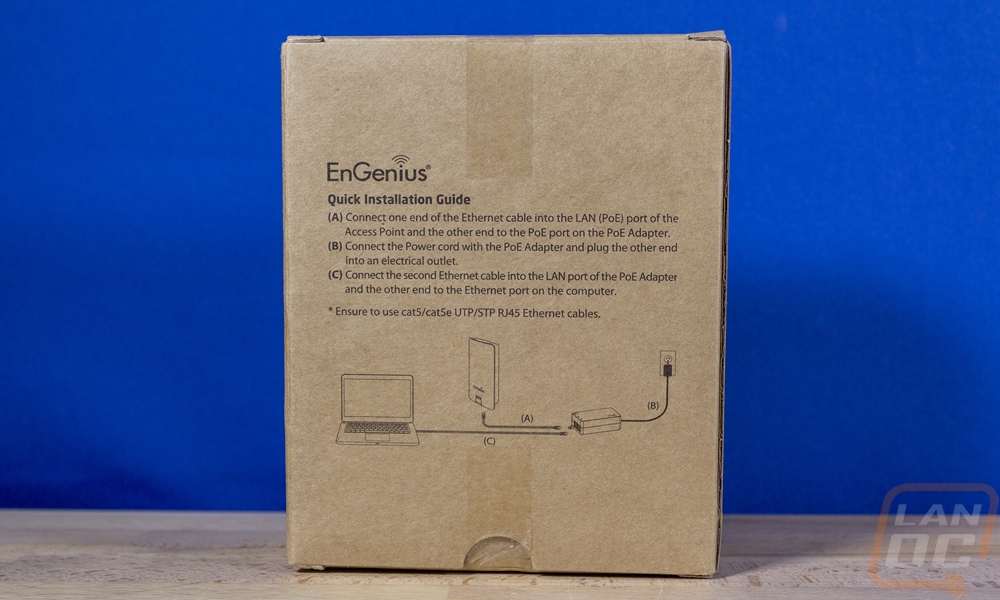 The EnGenius POE adapter is bigger than some of the POE power injectors I have used in the past. In the box, you get the injector and then the cable which has a C5 end on it (the three circle plug). The adapter has two tabs built into the housing that you can use to screw or zip tie it down. Then on one end, it has the C5 power plug and the other has two ethernet connections. This just passes through your data but adds power in for the POE. This adapter has a 54V output at .6 of an AMP rating and has the model number of EP5006GAT which all of that is listed on the underside of the adapter along with the serial number and all of the required certification logos. 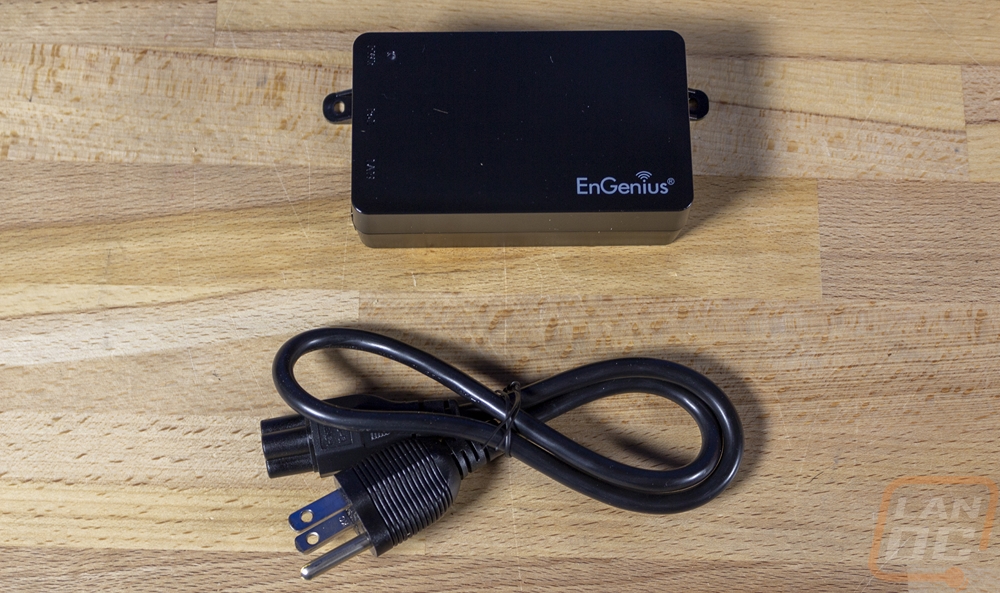 The ECW220 has a similar shape and look to the ECW230 that I previously took a look at. In fact, if you didn’t put them next to each other you would never know that they have a different housing at all. The ECW220S comes in at 6.3 inches wide and tall and 1.31 inches thick whereas the ECW230 was 8.27 inches wide and tall but the same thickness. The ECW220S does match the size of the ECW220 but has slightly more weight indicating that it isn’t exactly the same. The flat bright white finish will match most ceilings and blend in and the shape isn’t round like a lot of popular APs but the squared-off shape is also used a lot with APs as well. 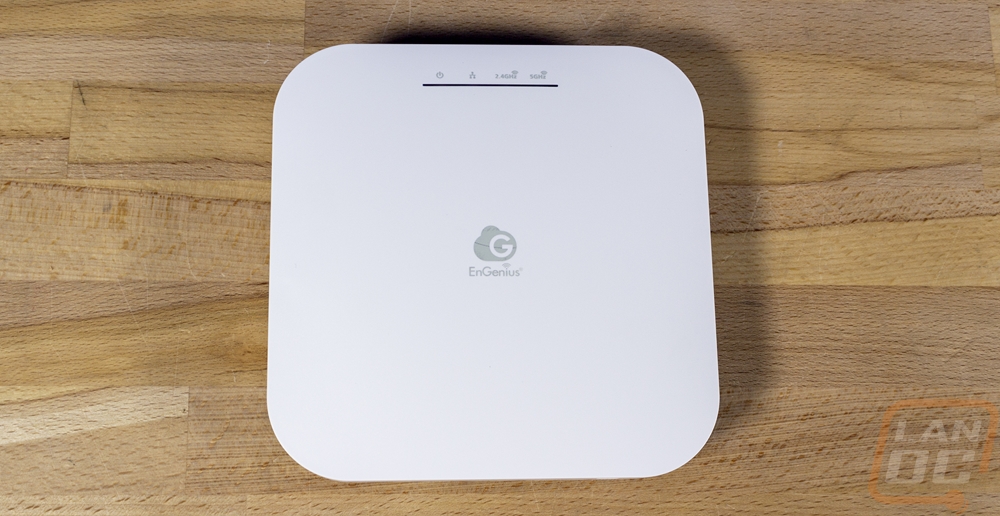 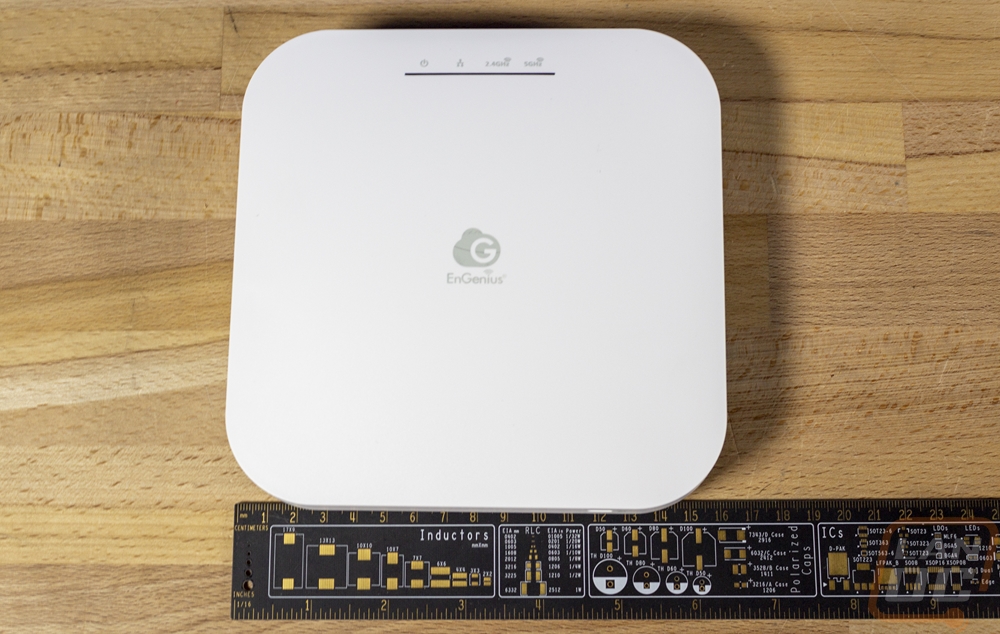 The side profile of the ECW220S shows that the shape does have a little bubble or bulge to it with the top having some roundness and the side edges are away from the back that curves out. That helps get some air around the AP to help keep things running cool. If the ECW220S is in any location where security is an issue it also has the Kensington lock hole on the side. 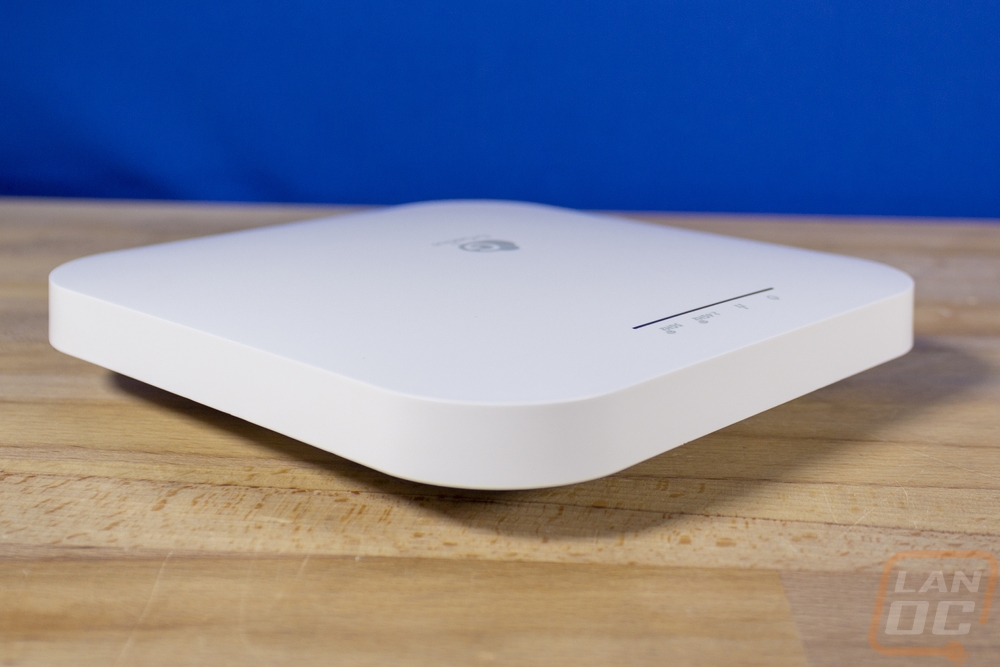 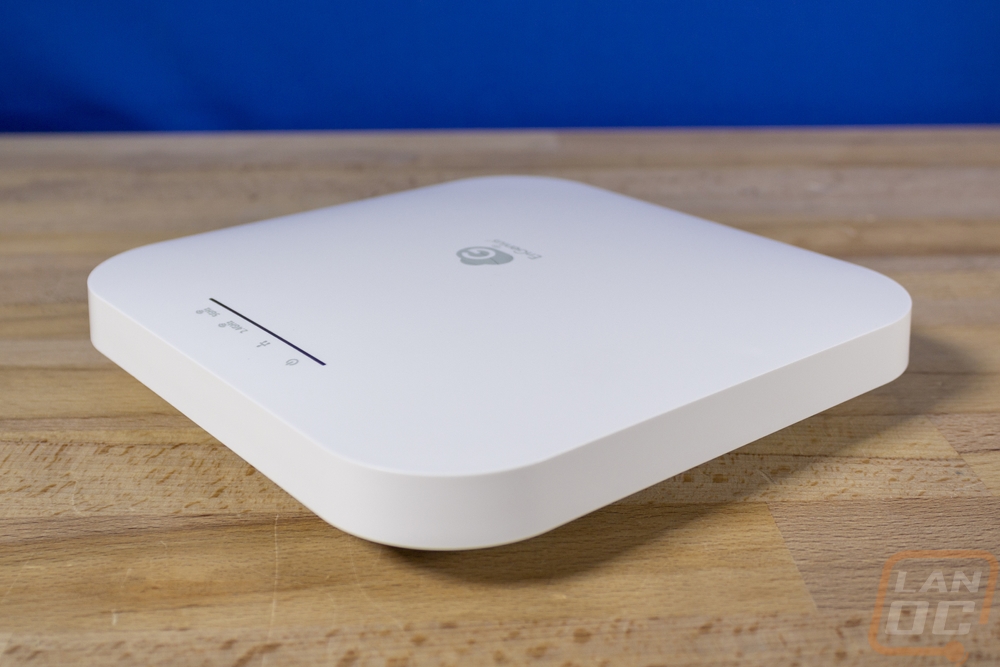 The top of the ECW220S has the EnGenius logo in the center with a light grey finish and then on one end, it does have the same status LED layout as on the ECW230. There is a difference between the ECW220S and the two non-S models. The S models have status LEDs for the scanning radios in addition to the normal status LEDs for the 2.4GHz and 5GHz radios. There is also a status LED for the BLE (Bluetooth Low Energy). The same power and network traffic LEDs are also on top and labeled. 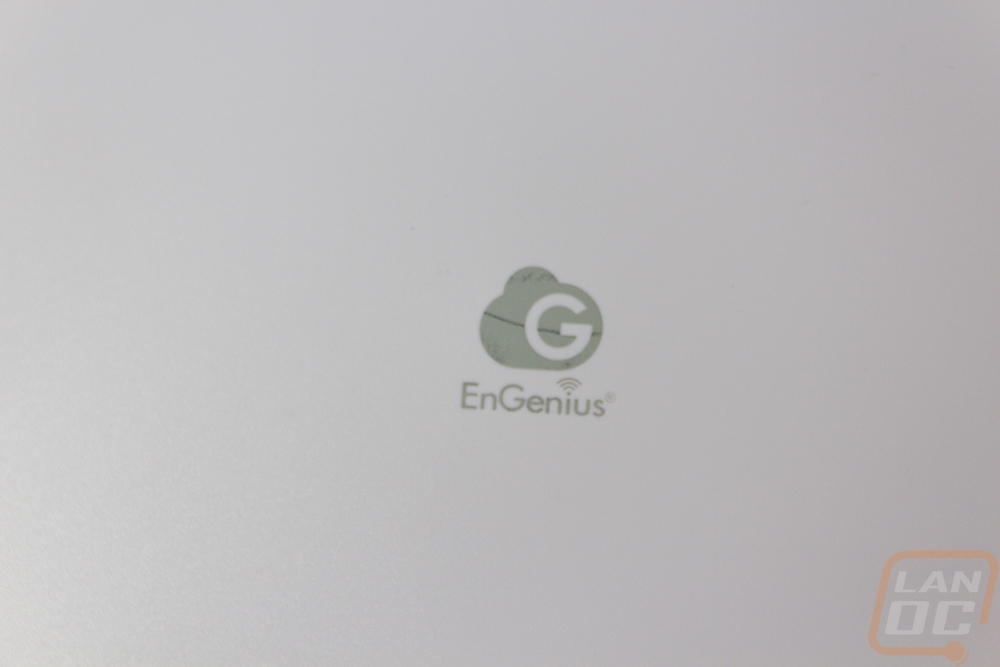 On the bottom, the ECW220S housing is cast aluminum which helps with heat dissipation and gives more strength for mounting. Speaking of for mounting, there are two raised brackets that let the included mounting brackets slide in and latch in place or they also have two slotted holes for using the included mounting screws to attach the AP directly to the wall or ceiling. Between those is a sticker that has the EnGenius logo in a big font and the model information next to it. They have the FCC information and barcodes for your mac address and serial number. The sticker also has the normal certification logos and manufacturing location information as well as the power rating for if you use a power adapter on the ECW220S. The most important thing here though is the QR code on the right side which can be used with the mobile app to add the AP to your network quickly on EnGenius Cloud. There is a recessed area for the cable connections. This has one ethernet connection which supports POE to power the AP. The ECW220S can connect at up to 2.5G whereas the normal ECW220 only supports a normal 1G ethernet connection. If you prefer to direct power the ECW220S there is a DC power plug for that as well on the right which has a standard 12v DC connection. It needs a 12V PSU that can handle 1.6 amps. Then on the far left, there is a small pinhole for hard resetting the AP. 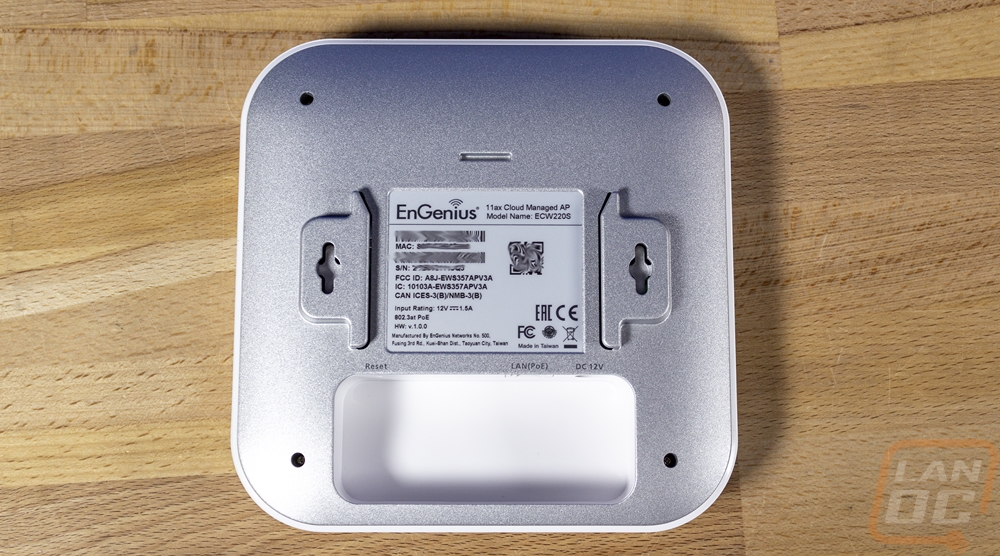 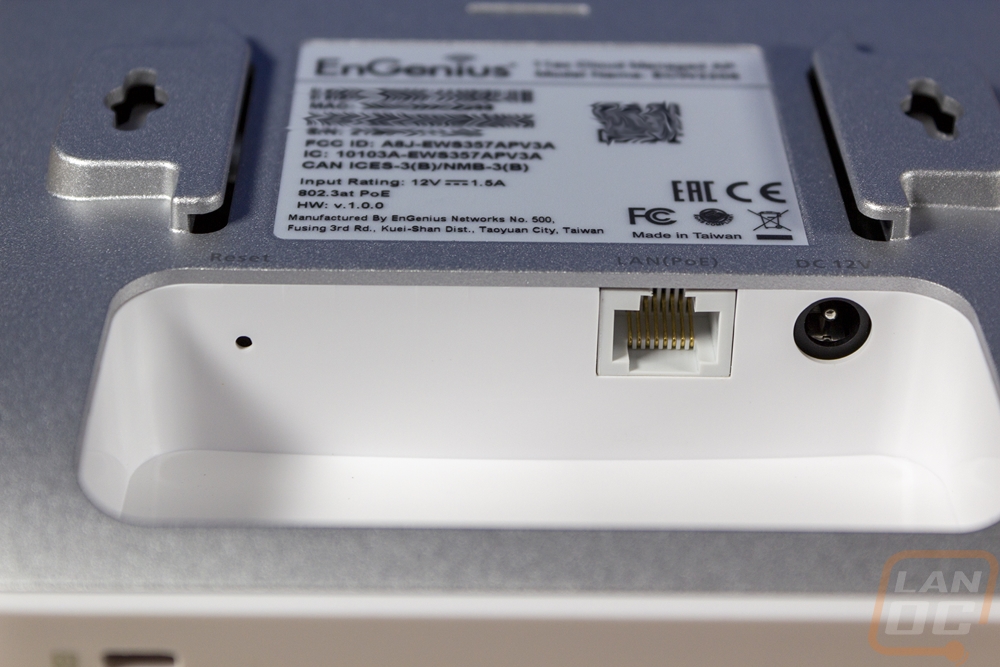