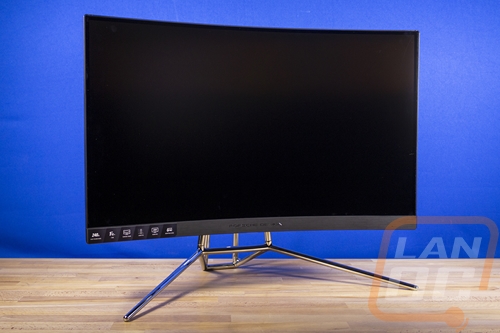 The partnership between AOC and Porsche Design is an interesting one because they do complement each other well. On the tech side of things, AOC knows what they are doing but monitors aren’t known for being stylish. This is where Porsche Design comes into play, with the Agon PD27 they did put the monitor in a class of its own when it comes to styling. The polished metal bar stand is very heavy duty and isn’t something you would want to hide at all. I mentioned it earlier and it sums the Agon PD27 up well. This isn’t a standard monitor, it is furniture for people who are trying to incorporate a gaming setup into a room. For most of us, myself included we build our PC to our style and maybe even add accents and decorations in the office around our PC, but the desk area is often the same look. The Agon PD27 combines actual high-end gaming performance with the styling, similar to how a few wireless gaming peripherals have been doing recently as well.

The display itself hits the sweet spot in my opinion with the 1440p resolution, especially with the ultra-high refresh rate of 240 Hz. You need to be able to push games up into that range and it is still hard to do at 4K. The 1000R curve on the monitor is more immersive and even if you get outside of the sweet spot the VA panel does a shockingly good job at viewing angles. Having adaptive sync is nice as well, you don’t have to worry about locking yourself in to one specific company, it works will with Nvidia and AMD. HDR also helps push the Agon PD27’s output to have brighter whites and darker blacks. Going back to the styling touches, the included desktop remote is also very unique though it isn’t all that necessary, I would be happy using controls on the monitor. The quick change options that let you flip between multiple display profiles are nice though for flipping from gaming to movies for example.

The Agon PD27 isn’t perfect, the focus on styling ends up bringing up a few downsides that most other monitors don’t have. One of those is that the stand isn’t removable, you can adjust the height, side to side angles, and up and down angles. But if you design you want to use a VESA mount you will be SOL. This is standard on nearly every monitor, even the gaming monitors which have lighting built into their stands so it is important to know. With all of the styling focus, I’m surprised that the power supply ended up being so large and integrated into the cord. Building it into the monitor itself would have made it a little thicker, but if you are going for a clean desk look it is going to be very hard to hide that big power supply. It’s a small issue, but the bezels look small but when you power things up you will notice that they are just as wide as on other monitors. I also had trouble with the integrated crosshair, If I were going to use it I would want the option to have something smaller and maybe to be able to pick a different color. Most gaming monitors have that but I couldn’t find the option in the menu on the Agon PD27. It may be available, but it wasn’t in the manual or easy to find.

The last big consideration is of course the price. The Porsche Design AOC Agon PD27 isn’t cheap and considering the features both on the design and tech side of things that isn’t a surprise at all. It’s going to run you $799.99. That’s a lot of money. That said, if you start to look at similar options. To get a 27-inch 1440p monitor with a 240 Hz refresh rate you would be looking at the Samsung Odyssey G7 which feature for feature is nearly the same including the 1000R curvature and is selling for $888.99 or even more for the Faker Edition. I also think the Porsche Design AOC Agon PD27 has a much nicer stand than the G7 with everything else being the same. 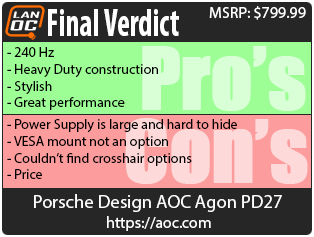 You might call him obsessed or just a hardcore geek. Wes's obsession with gaming hardware and gadgets isn't anything new, he could be found taking things apart even as a child. When not poking around in PC's he can be found playing League of Legends, Awesomenauts, or Civilization 5 or watching a wide variety of TV shows and Movies. A car guy at heart, the same things that draw him into tweaking cars apply when building good looking fast computers. If you are interested in writing for Wes here at LanOC you can reach out to him directly using our contact form.
Discuss this article
Log in to comment
Posts in discussion: Porsche Design AOC Agon PD27