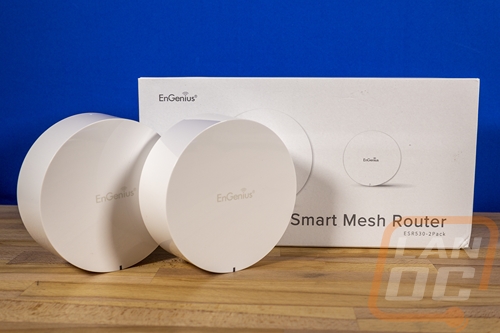 For the ESR530 2-Pack EnGenius didn’t just tape together two of the individual router boxes. The pair has its own packaging which has a white background and on the front a picture of both routers. The front highlights that EnMesh is easy to set up and EnFile as well which is a feature used with the routers built-in USB port that can turn one or both into on network storage with cloud access over the app. OIn the back they explain the app a little more as well as talk about the performance and what a mesh network can do for your wireless coverage. Then on the end of the box, they have a basic specifications listing and a list of everything you can expect inside the box. 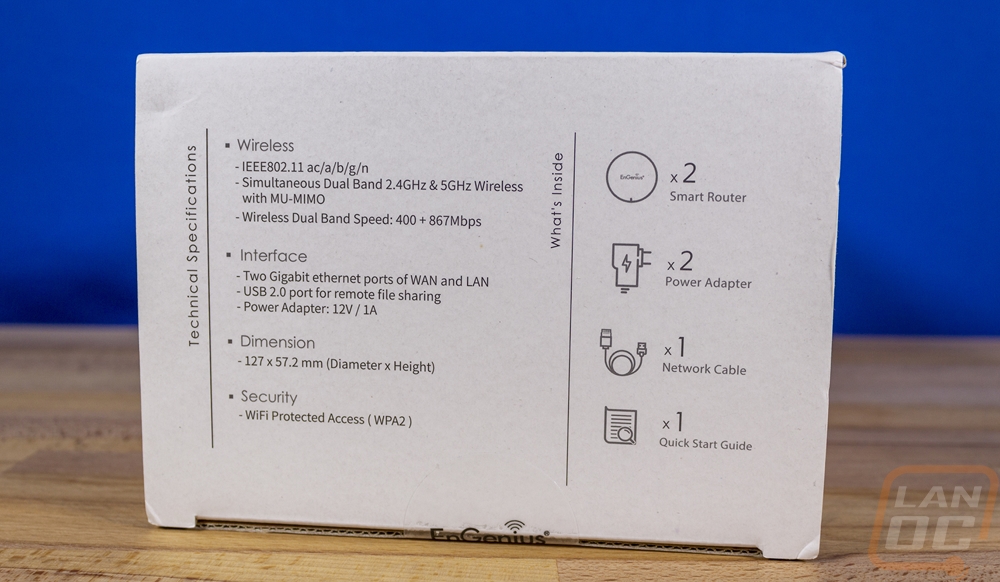 Inside of the box, you can pull out a formed cardboard tray that has the two ESR530 mesh routers up on top wrapped up in a sticky plastic. Up on top of them is a small round booklet that explains the apps needed to get things up and running and touches on things like FCC interference. It doesn’t have instructions on mounting or any other information. But the app will walk you through most of the rest of the setup. 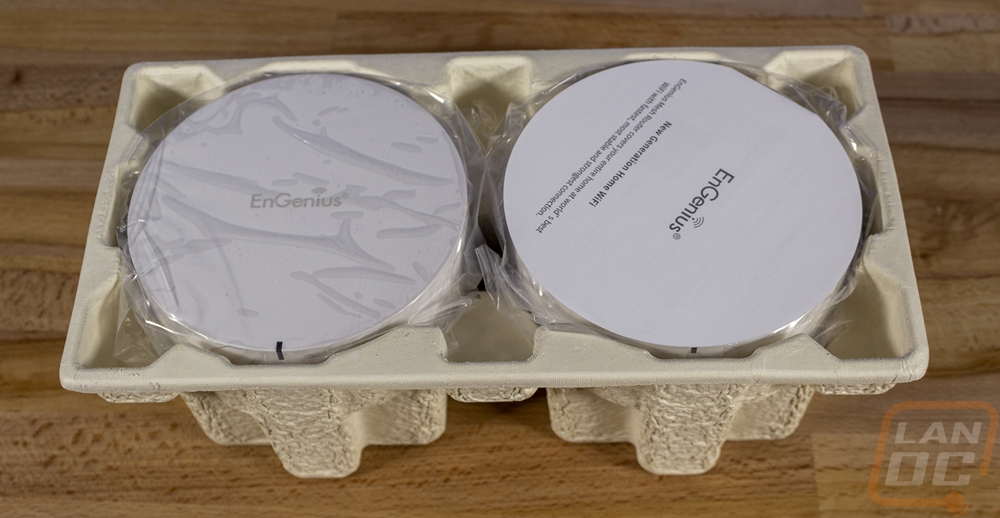 Up under the routers they have two power cables which are smaller but still a power wart, one short network cable, and two small baggies with mounting screws and drywall inserts. 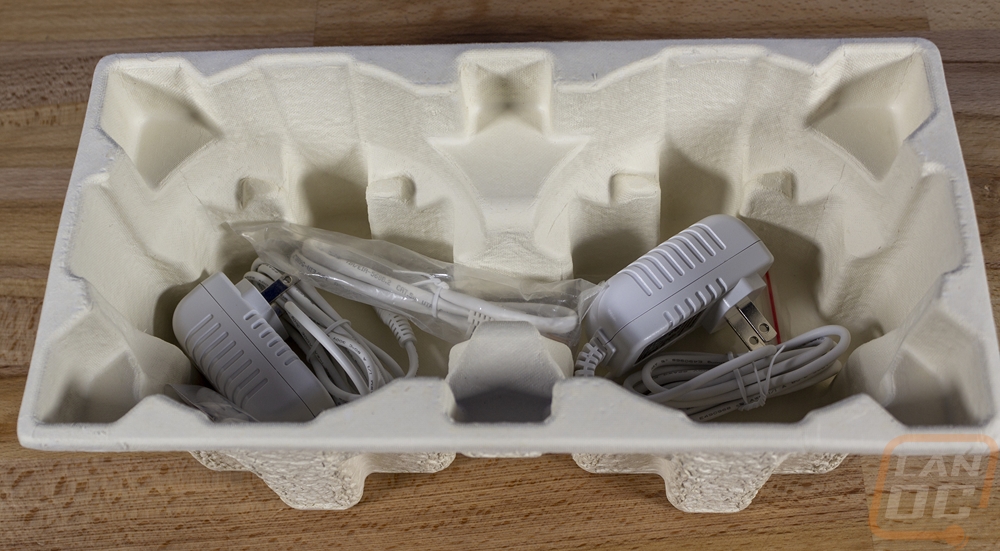 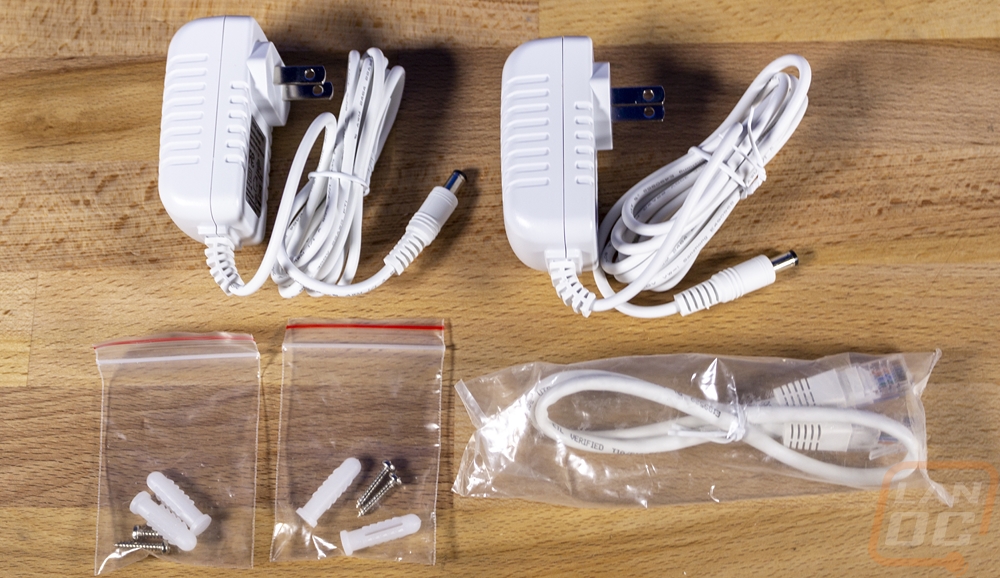 So the ESR530’s don’t have anything crazy for their styling. They are white with the EnGenius logo in the middle and a single LED light on the front edge. They are a hair under 5 inches wide, round, and a little over 2 and a ¼ inches tall. The height is a lot more than other mesh routers that I have had in the office. The height will also make the router stand out if your wall or ceiling mount as well. 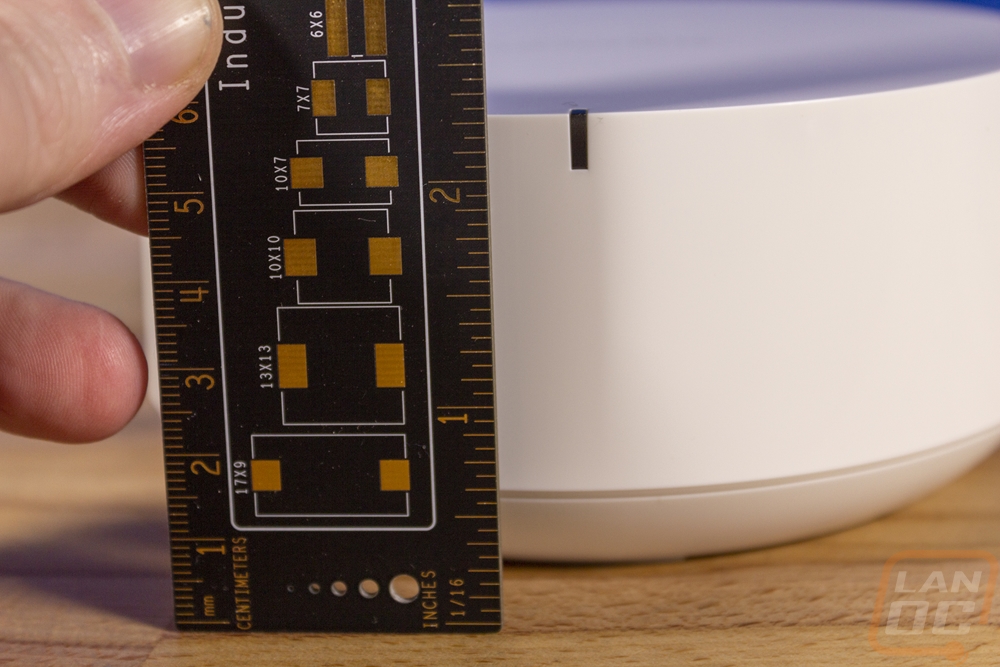 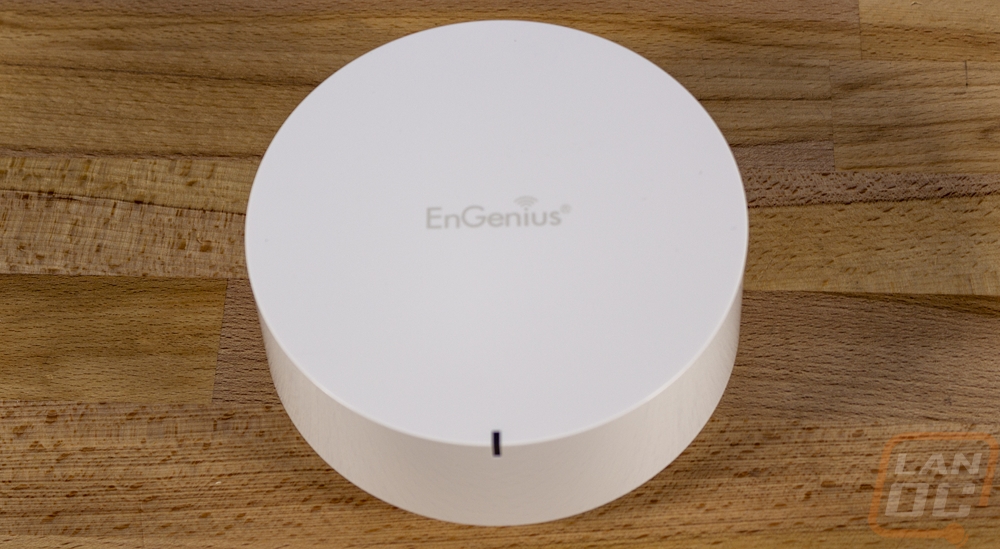 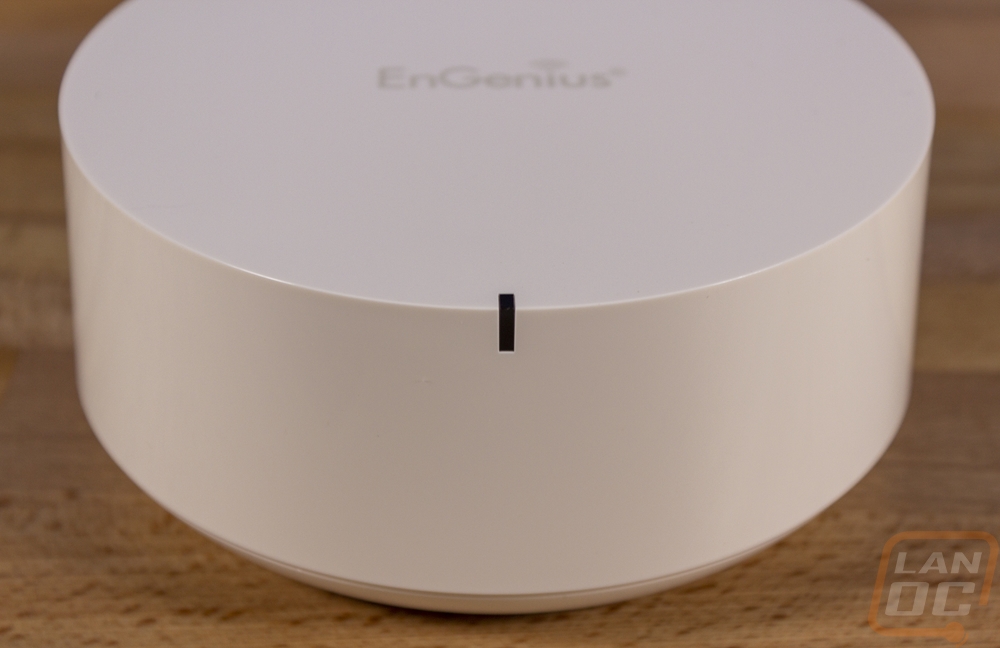 The back of the ESR530 doesn’t have much going on. There is a small pinhole opening in the back that hides the reset button and then you can see a small opening down at the bottom for wires to reach the bottom of the router.

The bottom is basically where everything is hidden. Both of the ESR530’s match and both will have dual 1G ethernet jacks. The WAN port is blue in color and the LAN port is an off white. They also have a DC power plug and a USB port. You might be wondering why a router would have a USB port, EnGenius has included support to hook up a storage device for cloud/networked storage or you can plug in a printer for a cloud/network access. The bottom of the ESR530 has three rubber feet and two slot mounts for wall or ceiling mounting. Then the back also has a sticker with the model information, required certification logos, your serial number, mac address, and a QR code used for the app setup. 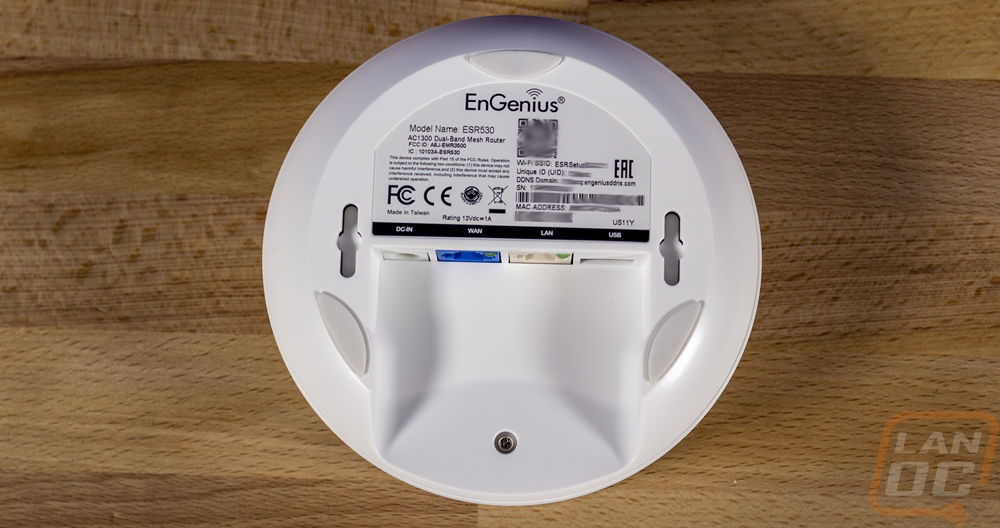 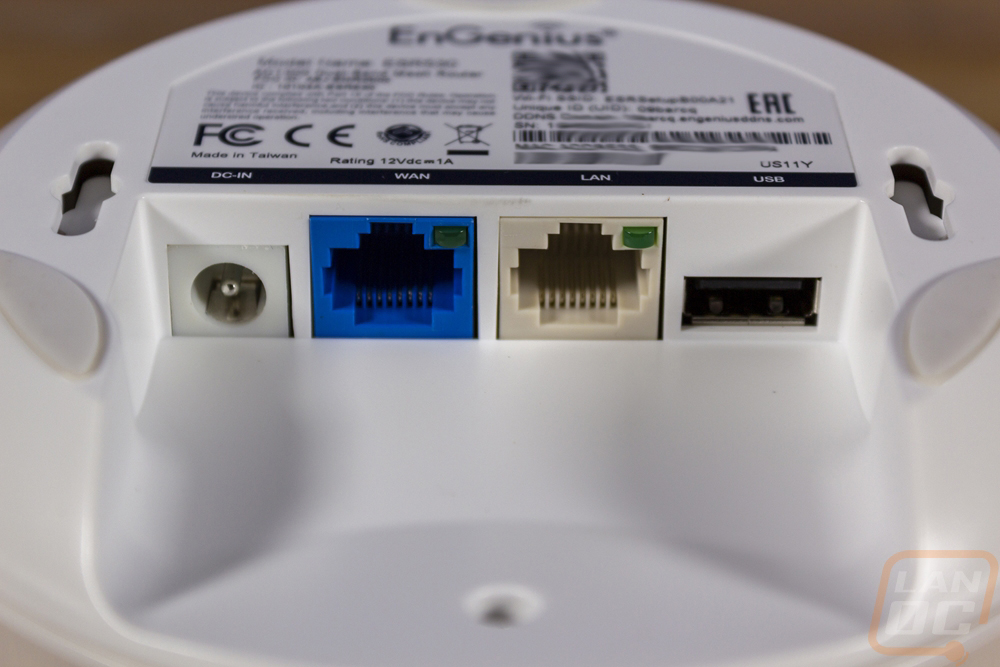 Now the ESR530 router can be picked up individually and will work perfectly fine. Today I am taking a look at the two-pack though which does come bundled all together. Both routers are exactly the same and could even be used by themselves. But the point of the two-pack is to use the pair together to create a mesh network and to cover dead spots in a larger home. 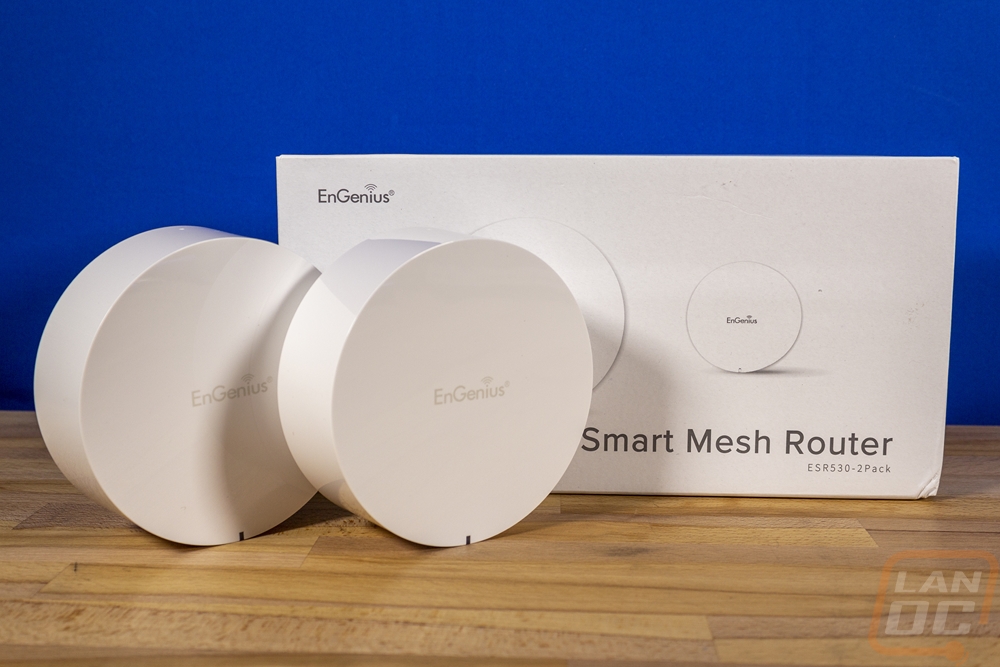 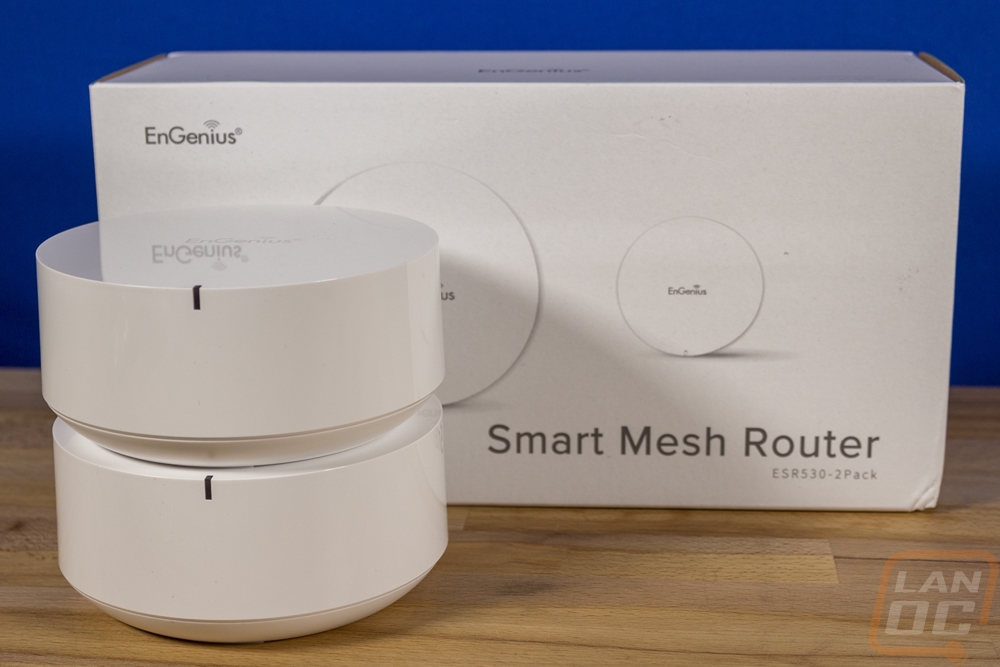