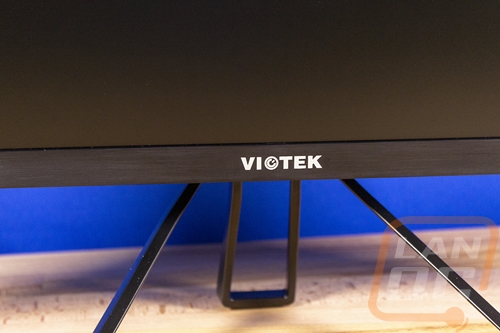 For performance testing, I don’t have a colorimeter on hand, but with the GFV22CB being a sub $150 budget monitor I don’t think perfect colors are expected or there at all. I started off my testing by getting the monitor configured correctly and I wanted to make sure it would even run at the 144Hz that it was advertised at. Plugging in that big power wart and a DisplayPort cable and I was good to go and 144Hz came up right away. 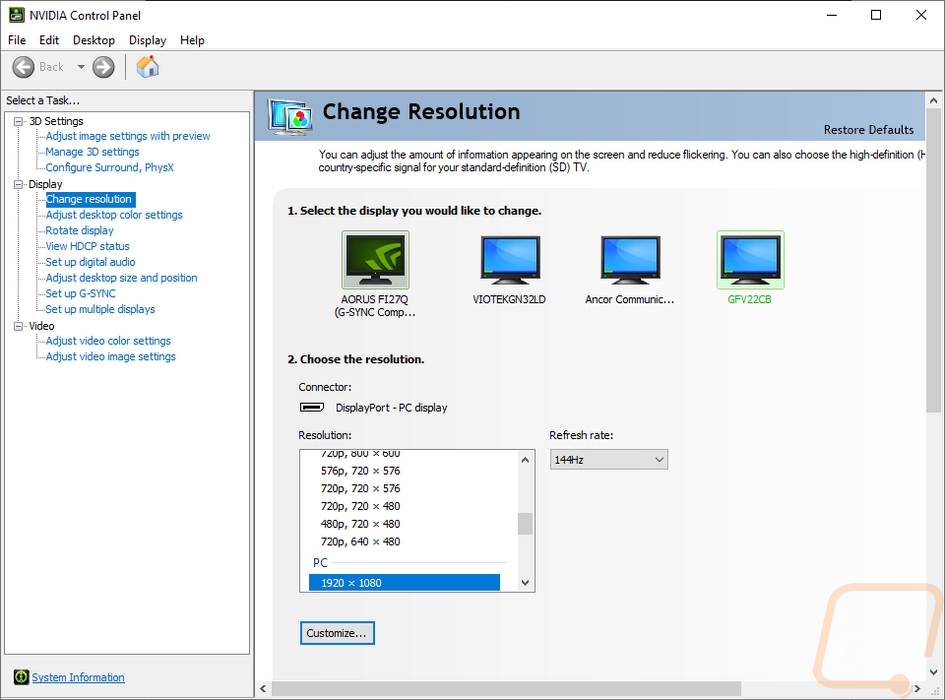 The next concern was with G-Sync, would Nvidia even support it? I honestly thought that the GFV22CB would be one of those “G-Sync possible” but only after overriding Nvidia’s strict GSync Adaptive requirements. Surprisingly once hooked up Nvidia popped up with support right away. You just need to make sure it is turned on in the control panel. You can also pick from fullscreen and windowed mode support. 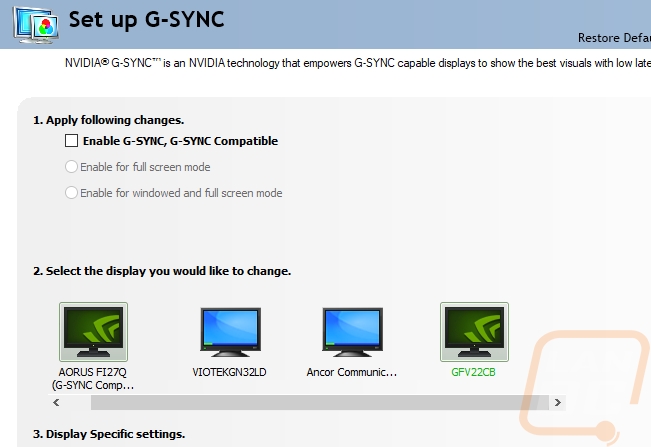 I mentioned the controls on the bottom of the GFV22CB. Well here is what the menus look like and most of you have most likely used a monitor with a similar layout and look as this is fairly standard. You do have all of the normal control with things like brightness and contrast as well as color temps and custom color profiles as well if you prefer. The menu has a few options for the menu itself as well where you can add transparency, move its location on the screen, and set the timer for it to close if you haven’t touched a button. You can also change your connection source if you have both the HDMI and DisplayPort hooked up and turn on FreeSync if you are using an AMD GPU. 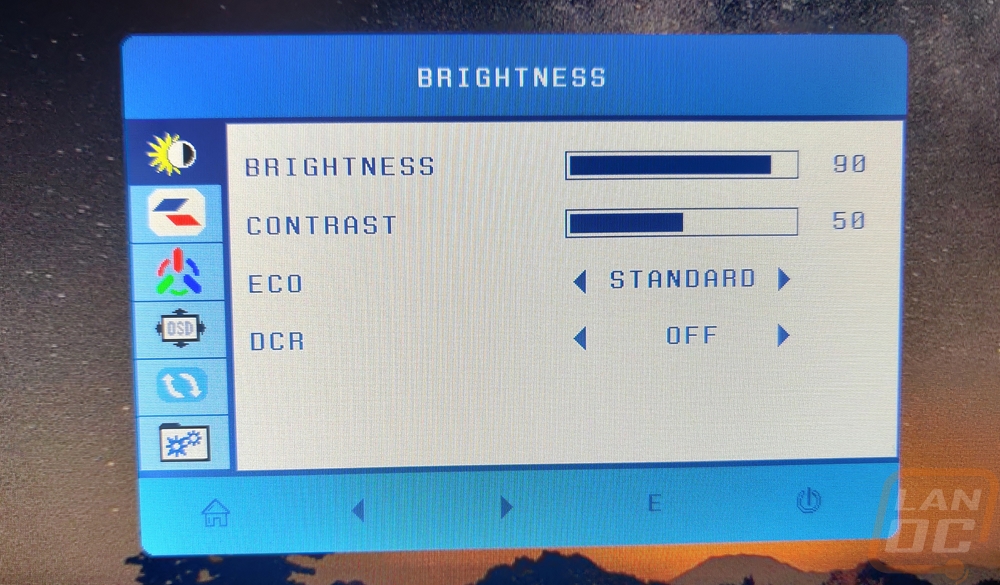 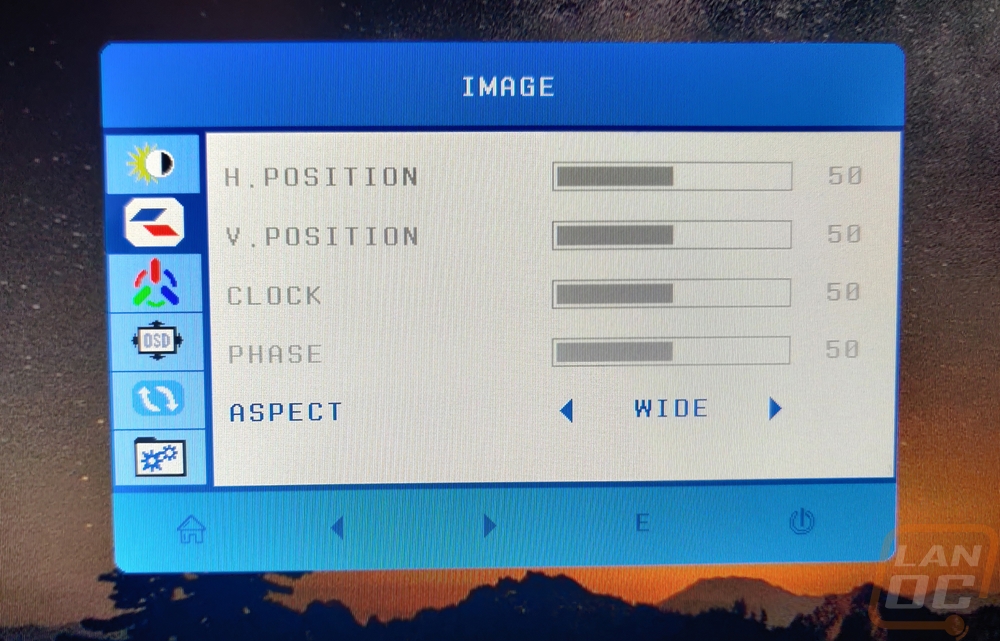 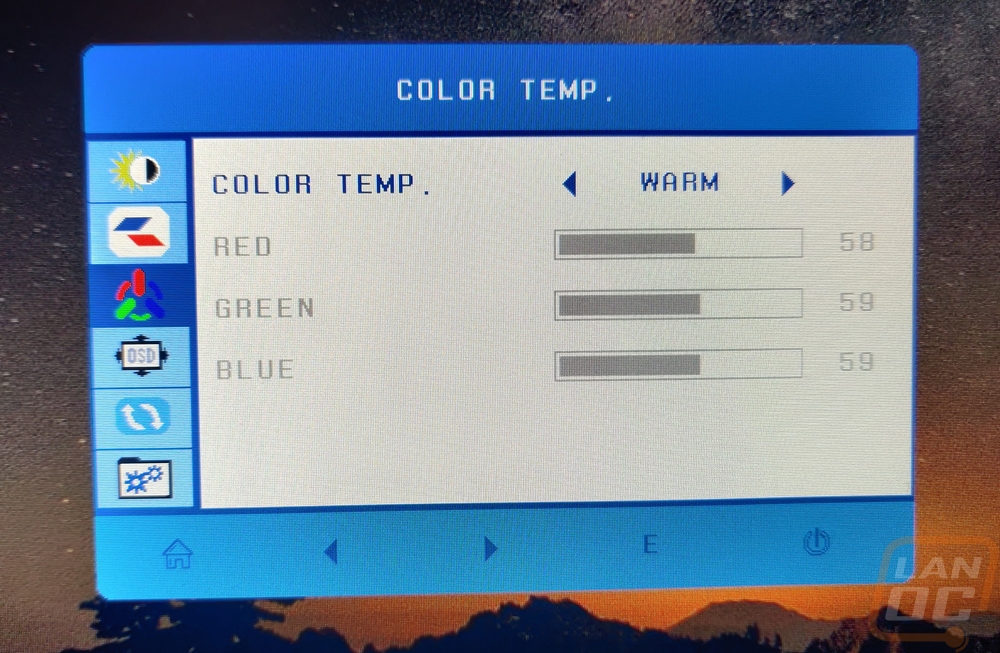 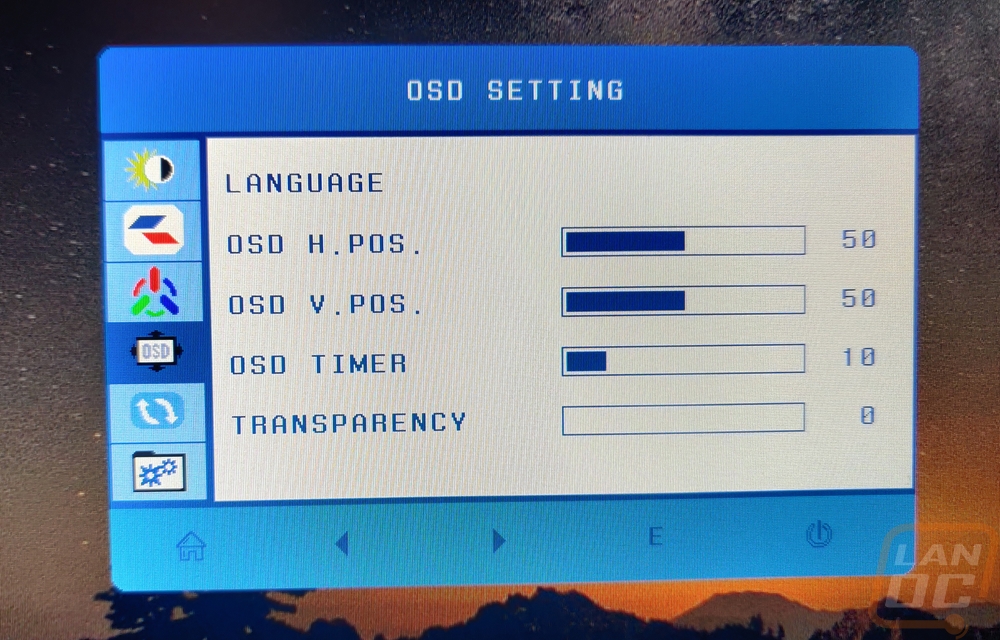 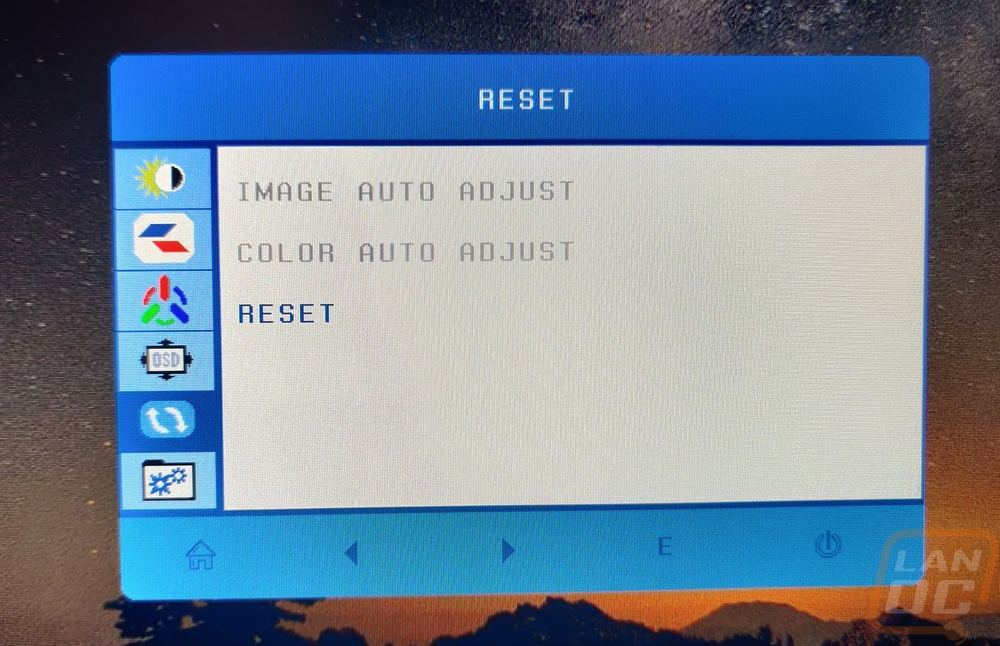 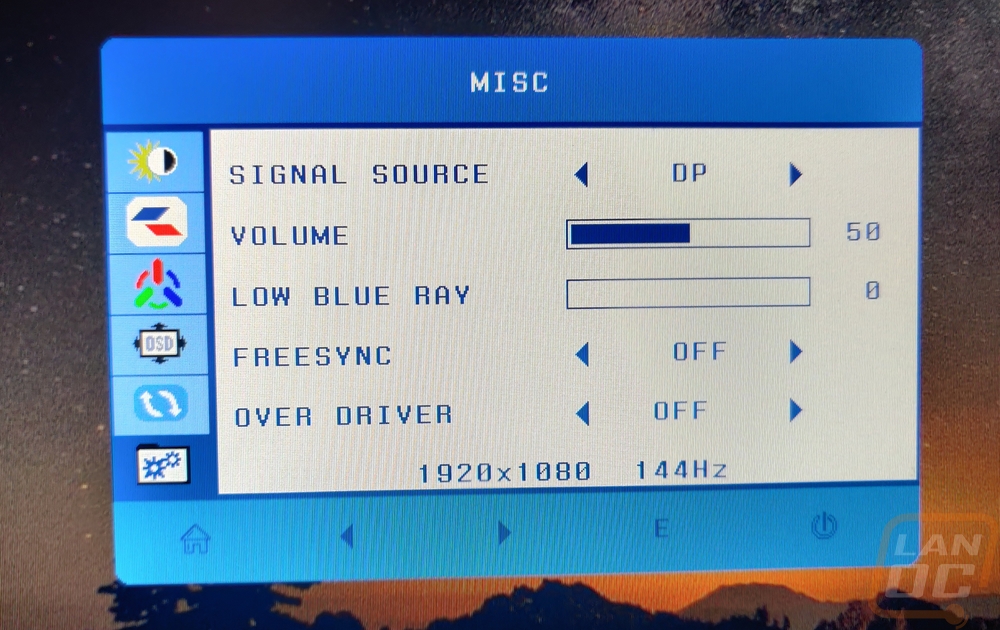 Like most “gaming” monitors these days the GFV22CB also has a few basic options to add a curser. The two examples below are the design options and you can pick from green or red. Now there are a lot of debates out there when it comes to games without a curser, especially anything competitive on adding one through the monitor which can’t be caught by anti-cheat software. I’ve personally never used one, but I do think that if I did want to use one both of these designs would too much. I would prefer to see a single dot option and a simple plus sign style. The options that the GFV22CB has would cover up too much. I also think black should be an option.

To take a look at some of the GFV22CB’s performance I used Eizo’s monitor test. It doesn’t cover everything, and it leaves a lot to subjectivity, but it is a nice way to compare monitors and turn them when you don’t have a colorimeter. In the color uniformity test, I did notice some darker areas up at the top of the GFV22CB, especially the top right. Text on the text test was solid, though I haven’t used a 1080p monitor in a while so the screen door effect was a lot more noticeable for me. 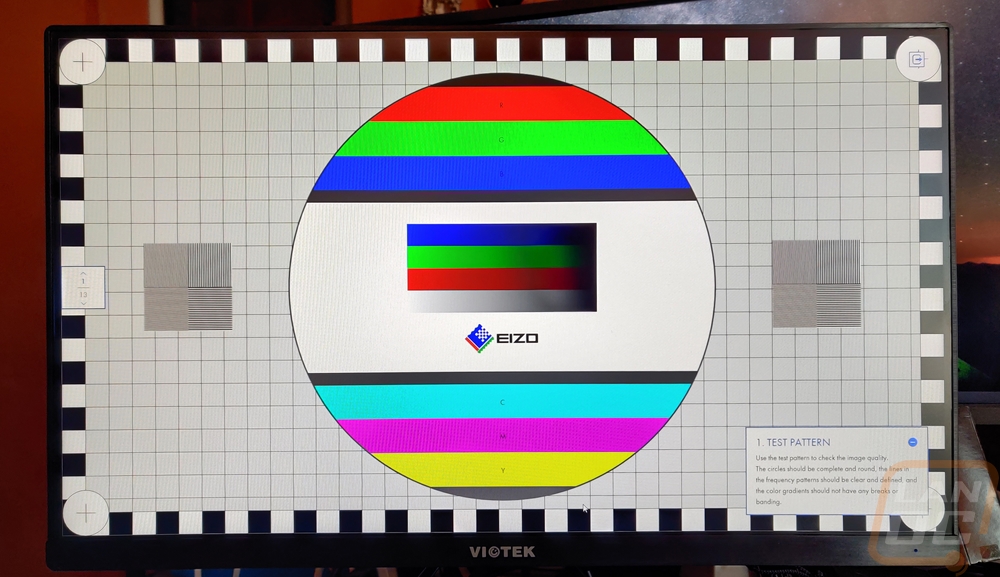 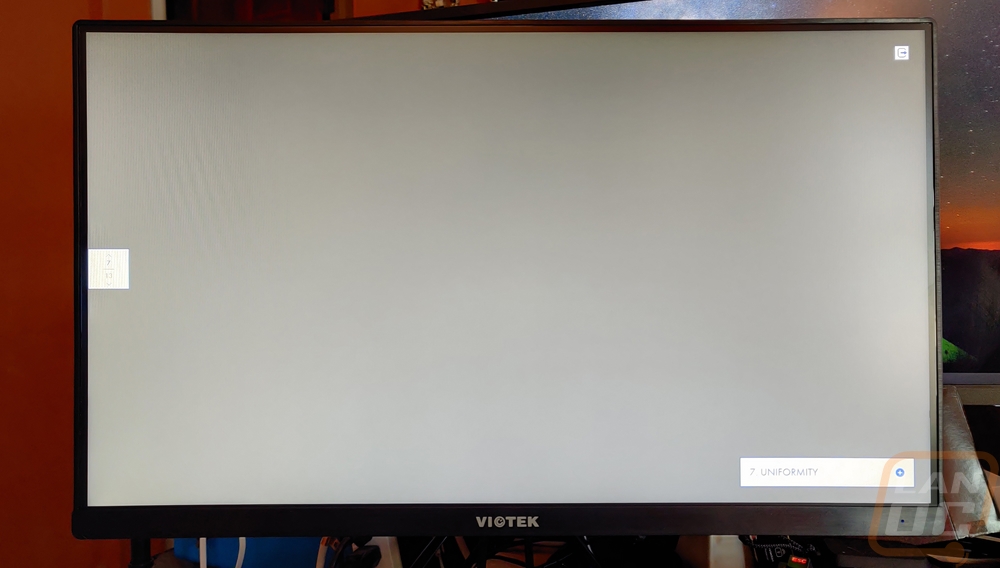 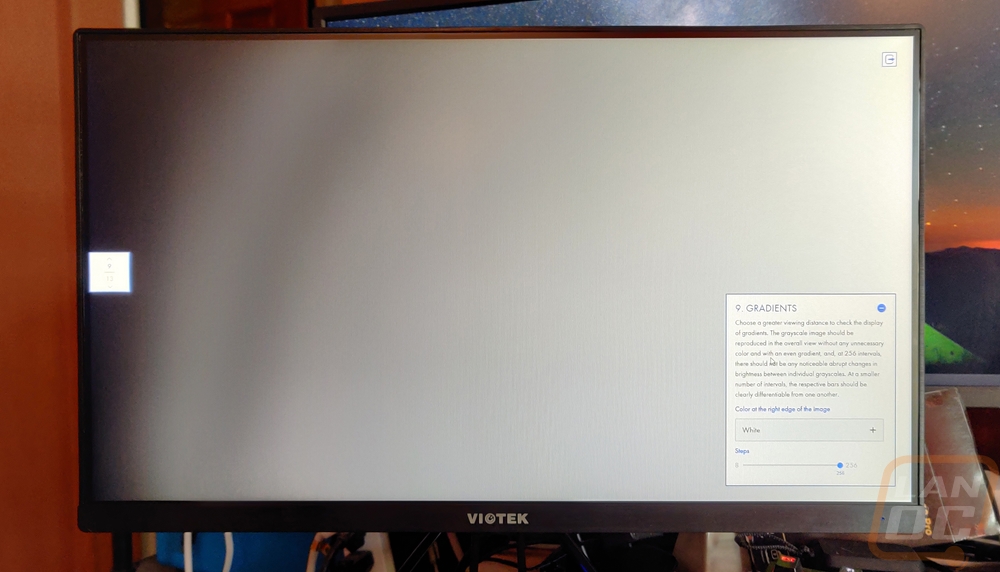 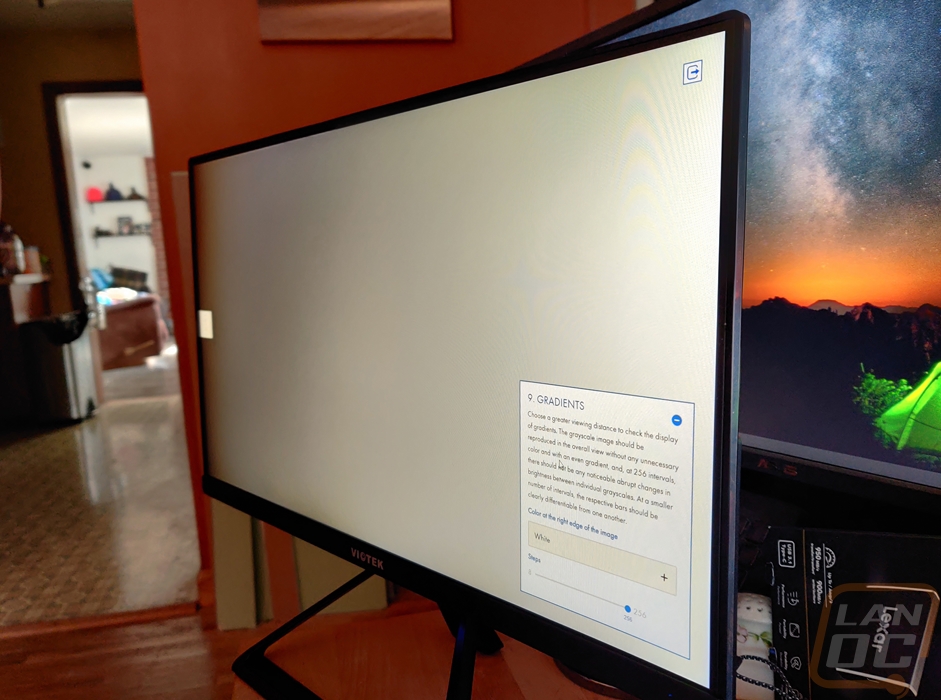 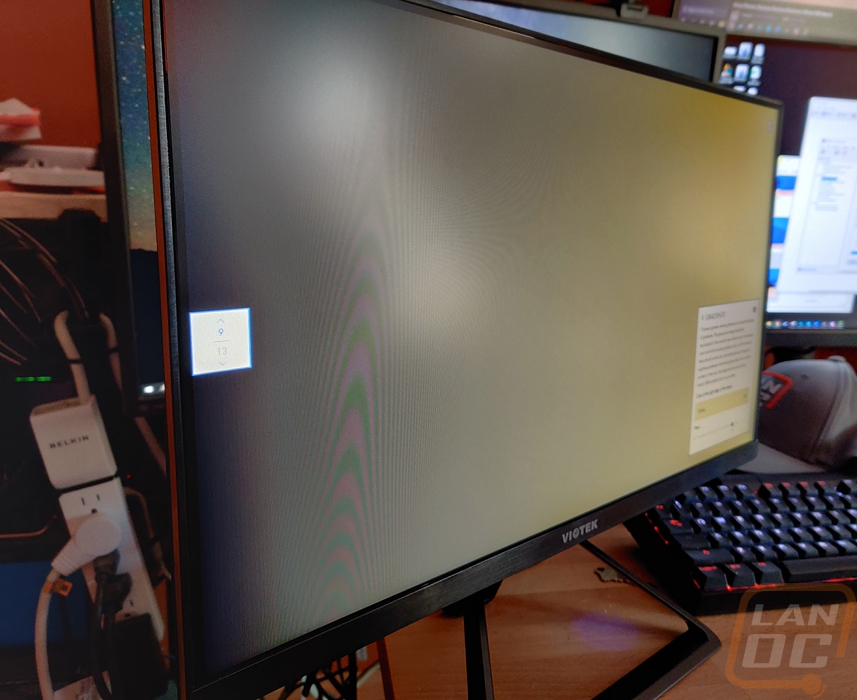 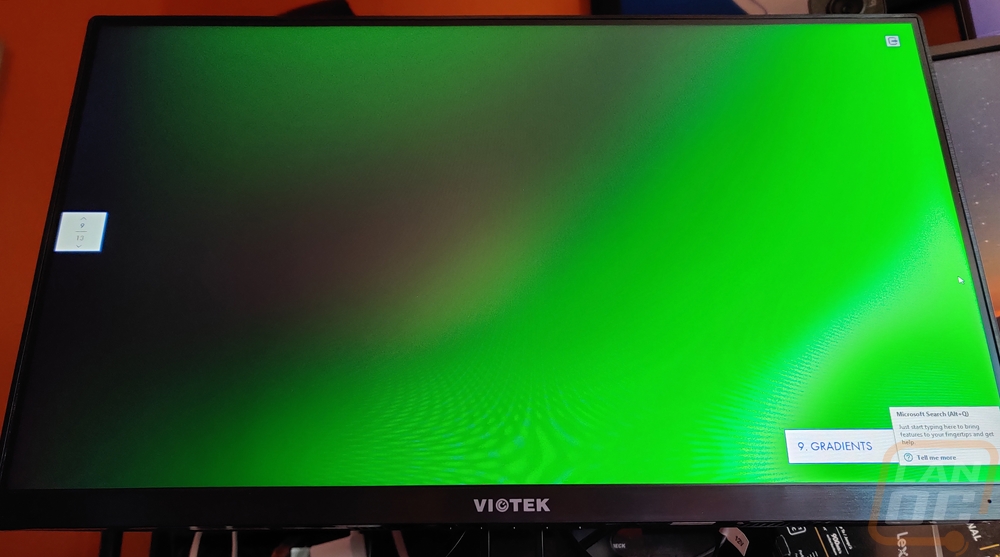 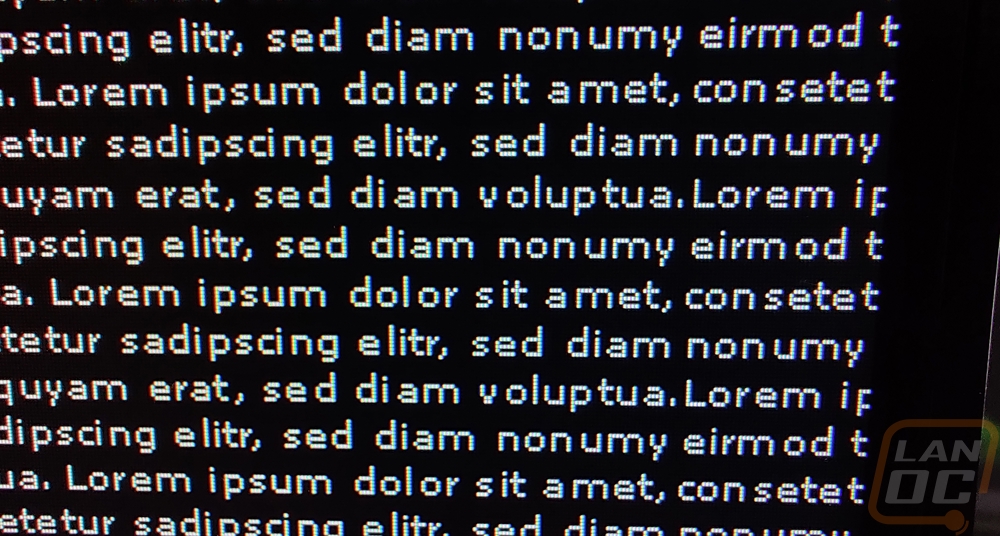 Being a VA panel there are tradeoffs. It does help with the contrast and the refresh rate which is important. But you also have to deal with a small viewing angle and that was obvious when I got to that test. The five dots on the screen are all the same color, but you can see how they change depending on the angle we look at the screen. The worst ware from the bottom which IMO is better than problems when looking down. Side to side was noticeable as well. 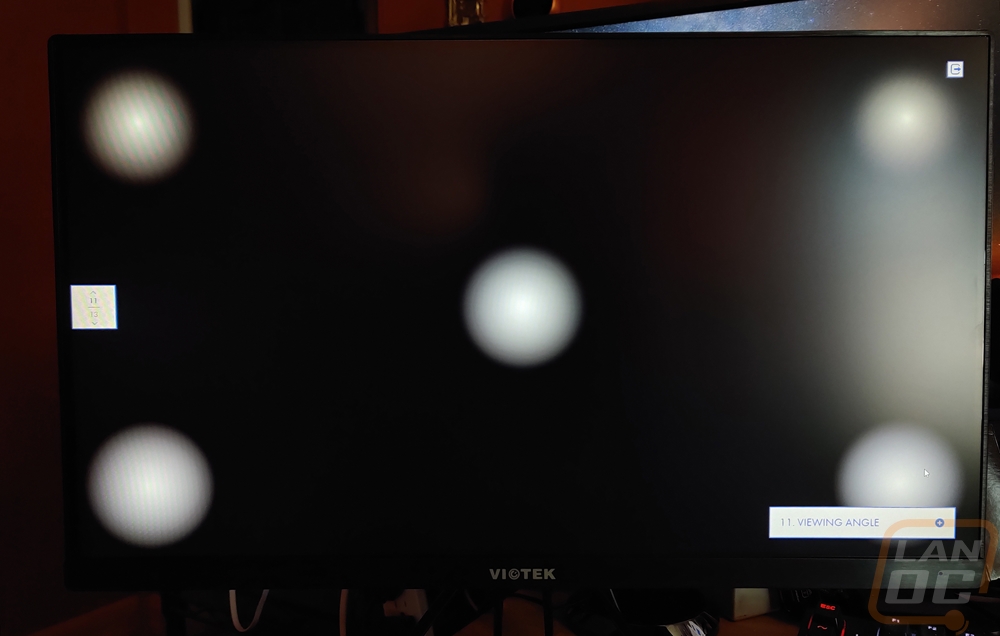 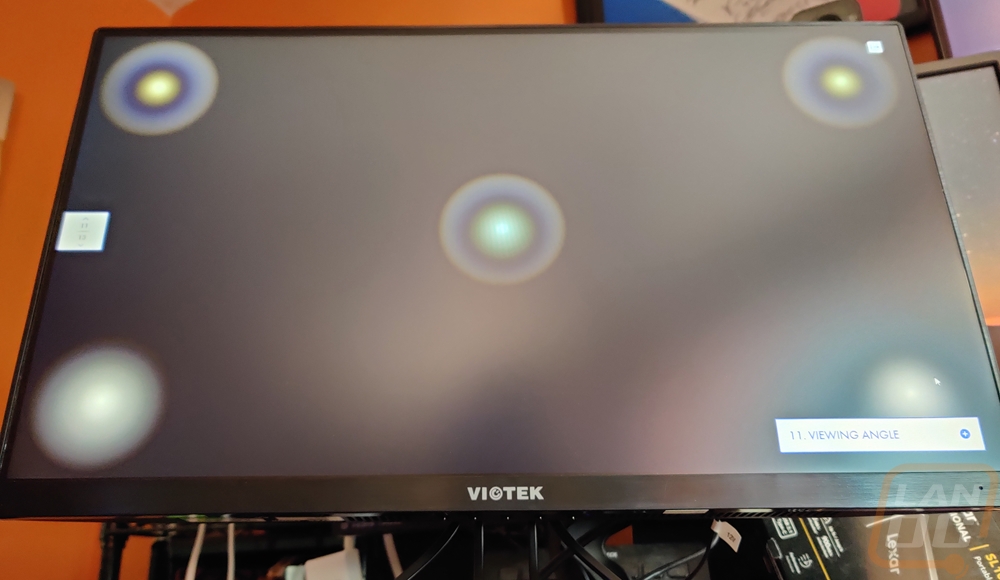 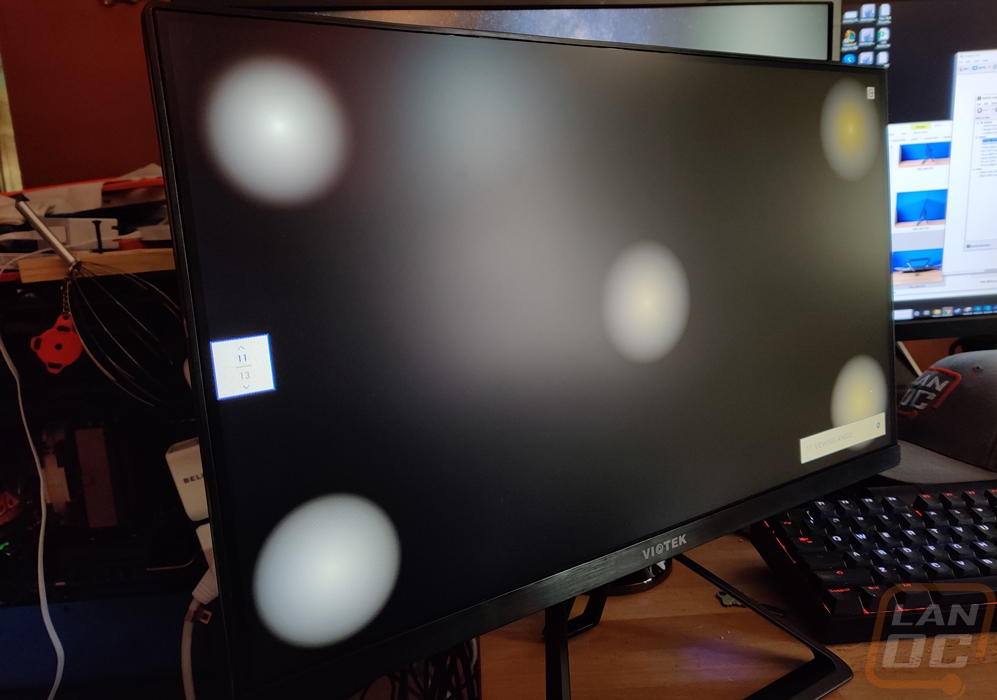 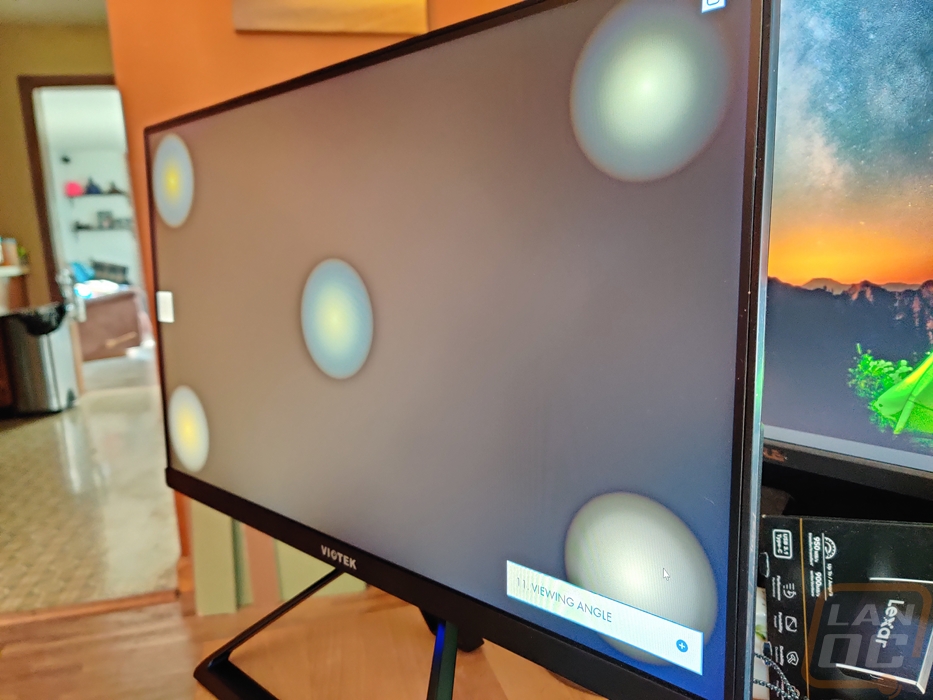 I also took a look using testufo.com to make sure that the 144Hz refresh rate was working as well. It is obviously hard to photograph but you can see in the picture below that the gaps between movement were smaller as we got up into higher FPS. There is some notable ghosting but it is also exaggerated in the photograph as well. 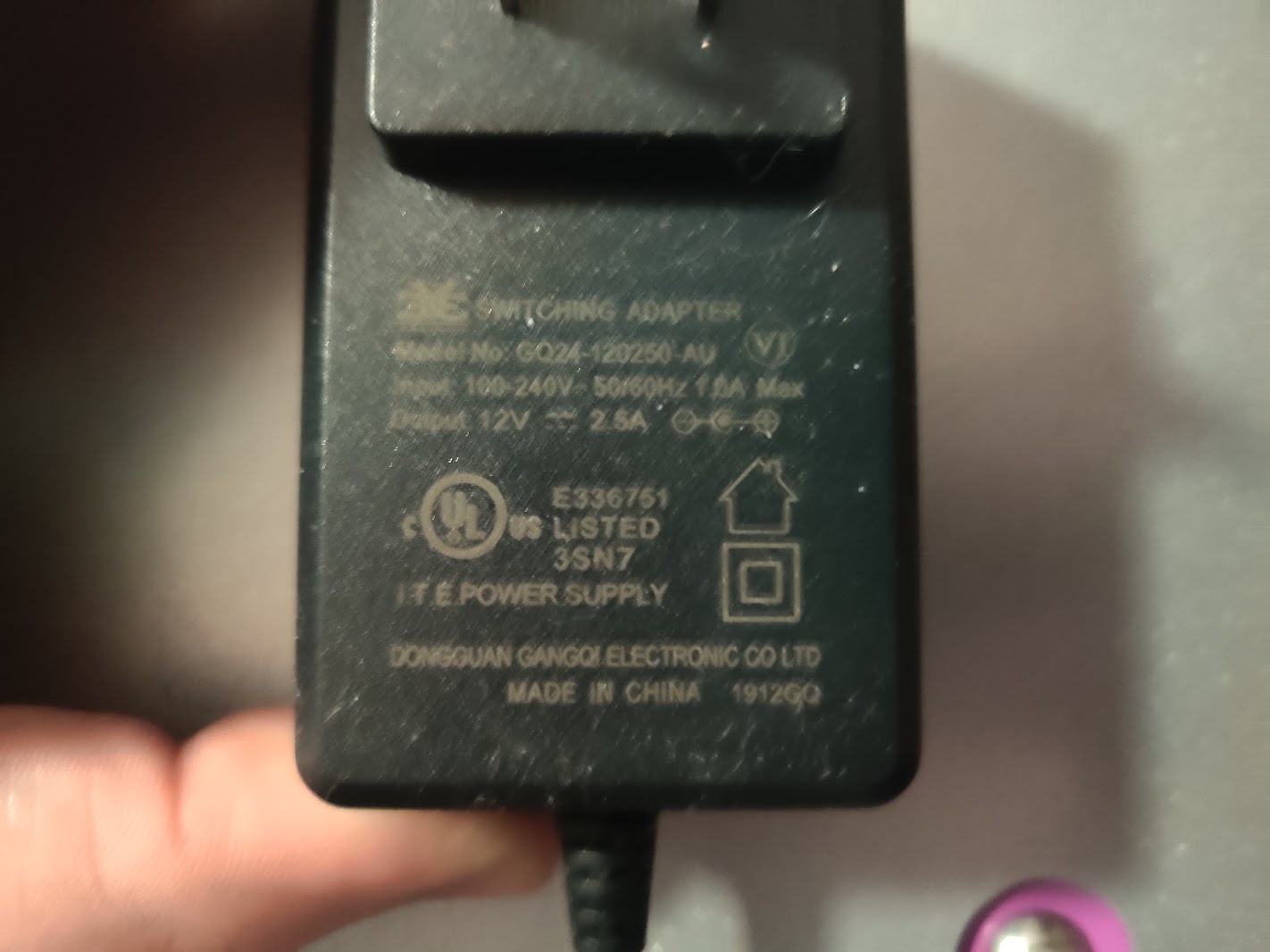 We have 988 guests and one member online