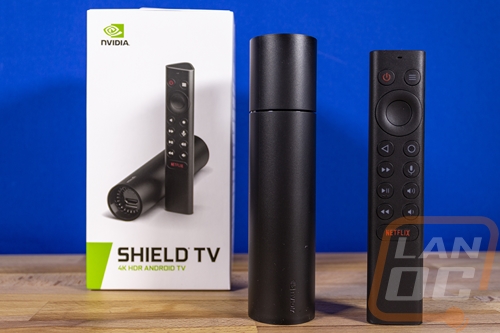 For performance testing, there were a few different aspects I wanted to take a look at. Namely, I was curious about how the Tegra X1 from the original Shield TV compared to the new 2019 model. For this, there are a limited number of benchmarks available without side loading and by limited I mean just one. They have 3DMark available which is great because you can also compare it against other android or PC devices. I tested both Shield TVs with both the Sling Shot and the Sling Shot Extreme tests and this is where we landed. The basic Sling Shot test had the older Shield TV out ahead, which had me retesting both multiple times to be sure. The graphics score is higher on the older model, but the physics is as well and I don’t know if this is a thermal throttling issue or if maybe the lower RAM capacity causes it. The Sling Shot Extreme test, on the other hand, is the other way around, with the new 2019 model way out ahead in both the Vulkan and OpenGL results. These look more realistic as well with the physics results for the older model being the same or a touch higher but the graphics score on the 2019 model being much better which matches the fact that the 2019 model has a higher GPU clock speed. I do wish there were more performance tests available, especially when Geekbench is supported on other Android TV devices. I don’t know why it is still blocked for Shield TV. 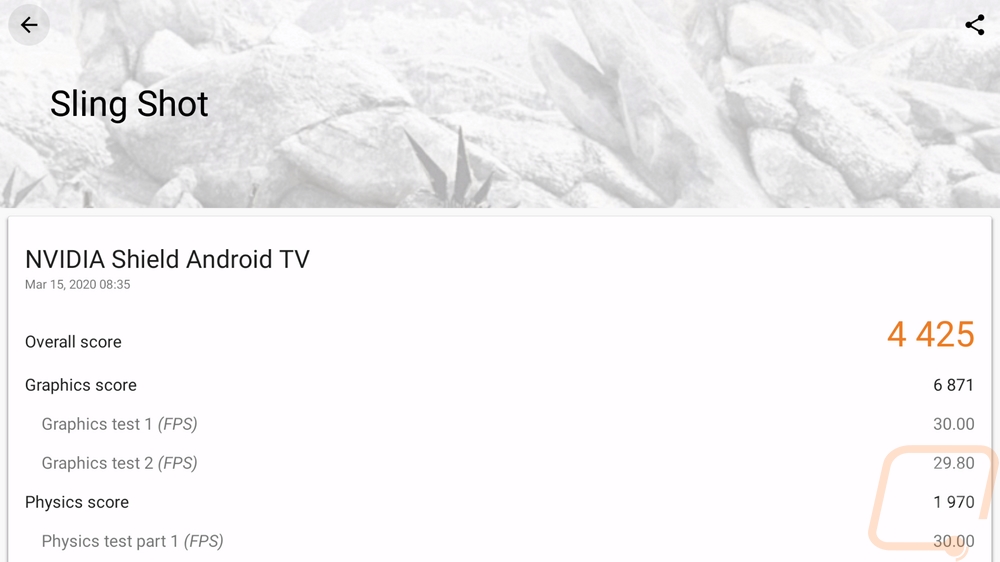 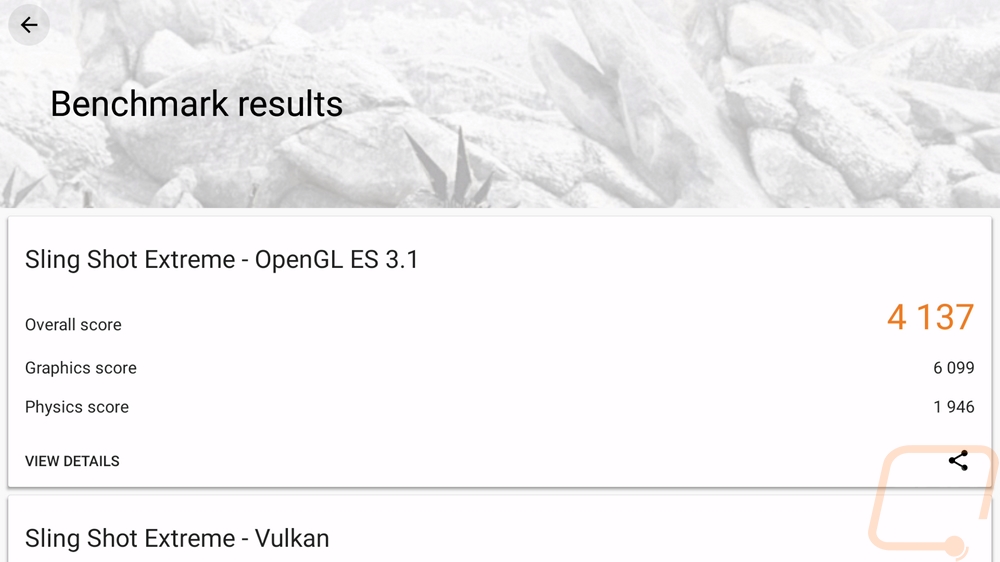 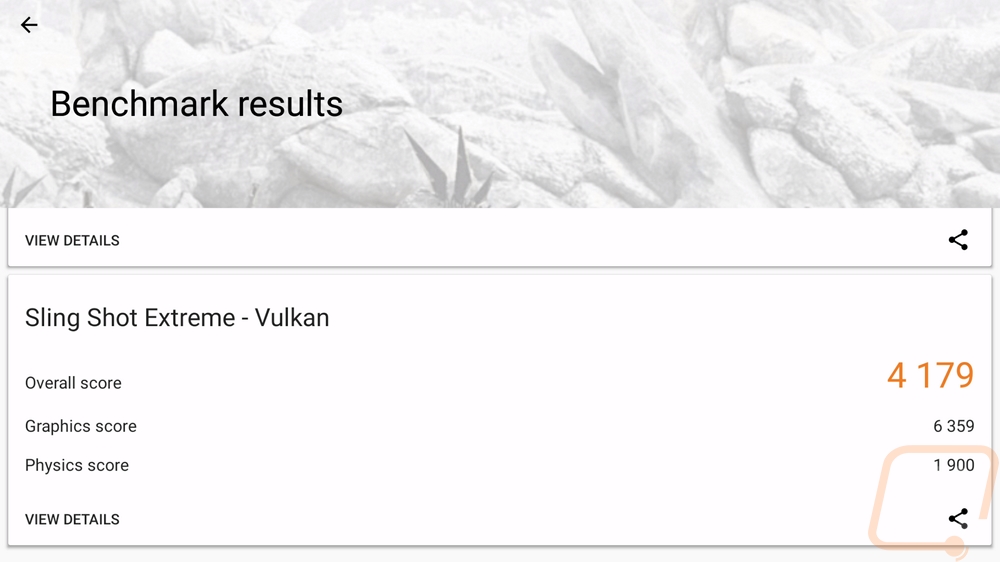 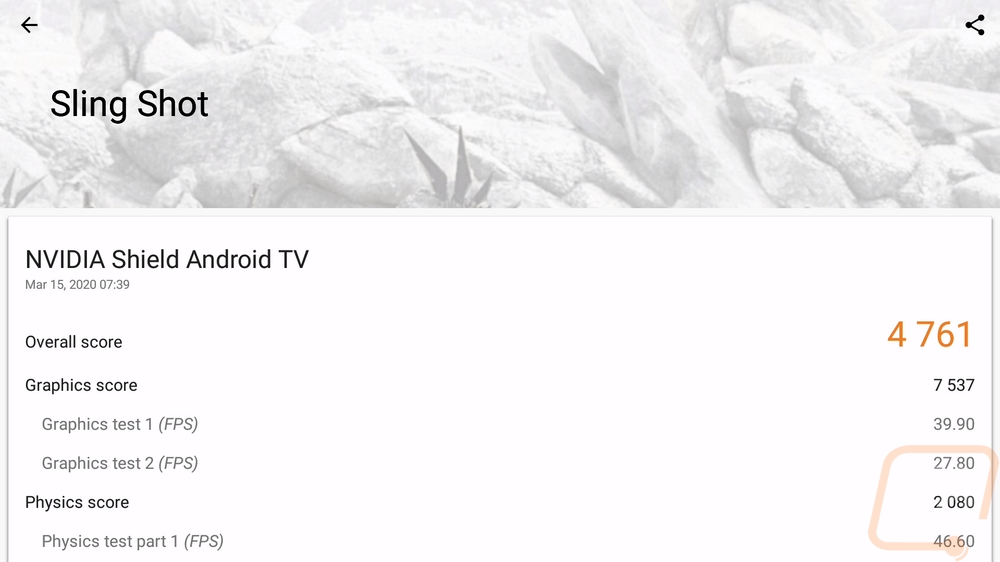 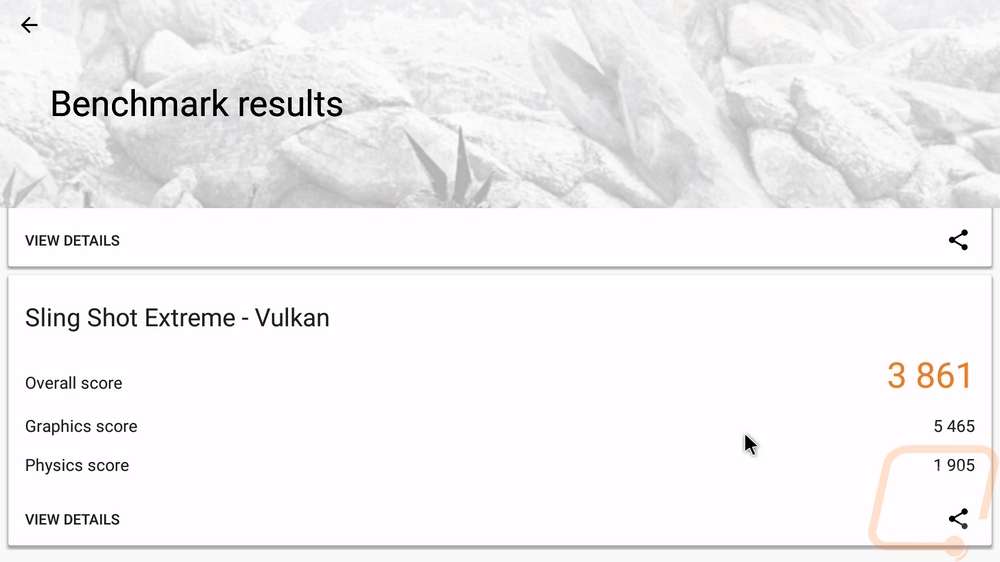 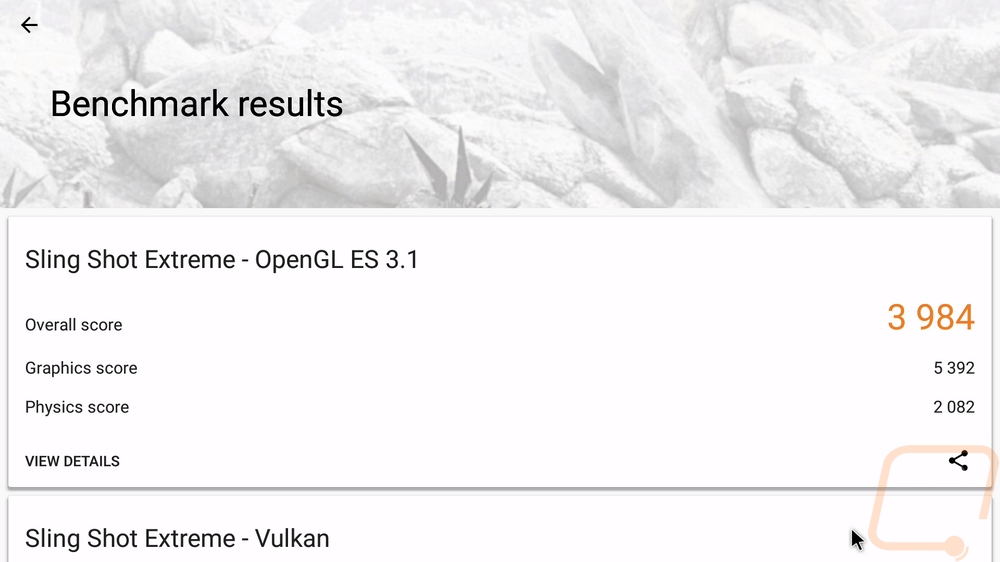 The other half of the Shield TV experience is in the software and by far the best thing about these devices over the past 4/5 years has been Nvidia’s commitment to updates. I haven’t ever had a device that has gotten updates for this long and with the new model, I would imagine they are going to keep it up. They are quick to get the latest versions of Android out and stay on top of bugs and security updates as well as working with apps to add support. Setup was easy as well, I just had to use another android device and tell it to set up my device and it transferred over things like my wifi passwords and logins. Once up and running I was already greeted with a new update as well 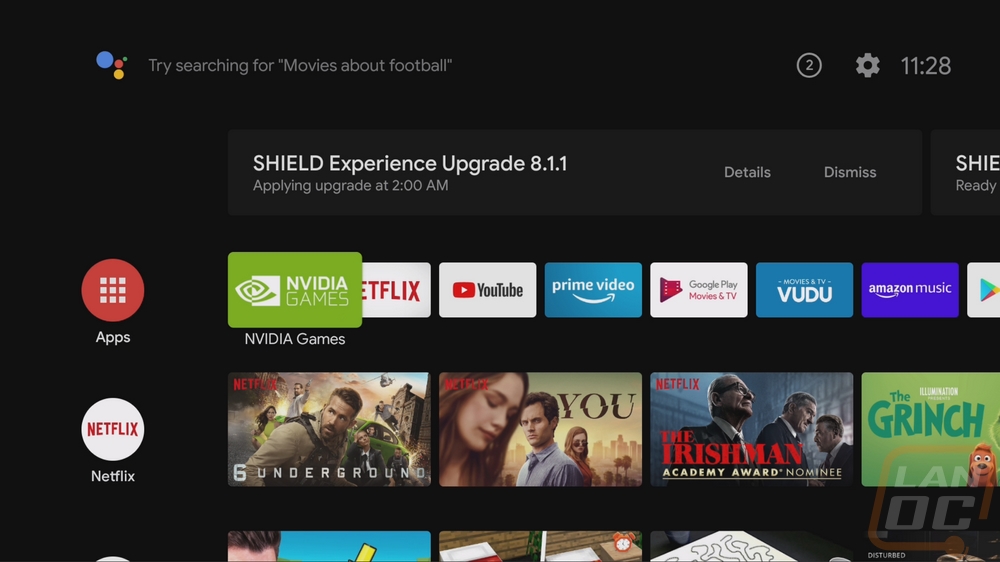 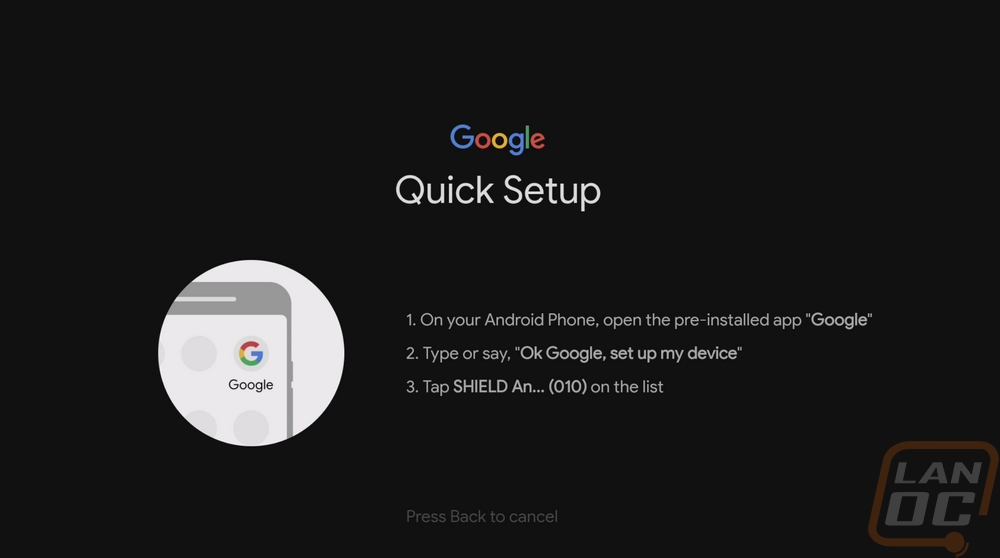 Now I’ve talked about how great the Shield TV is for media use in the past and that hasn’t changed. There is a long list of apps for free and paid TV services including things like Hulu Live and YouTube TV for anyone who wants to cut the cord. Netflix and Prime are there, of course, preinstalled even and all of the music services are there as well. The Android TV interface is easy to use and you can arrow down through different apps and have suggested videos or channels on the homepage for quick access and all of the home page can be rearranged or you can turn any of the apps off as well. 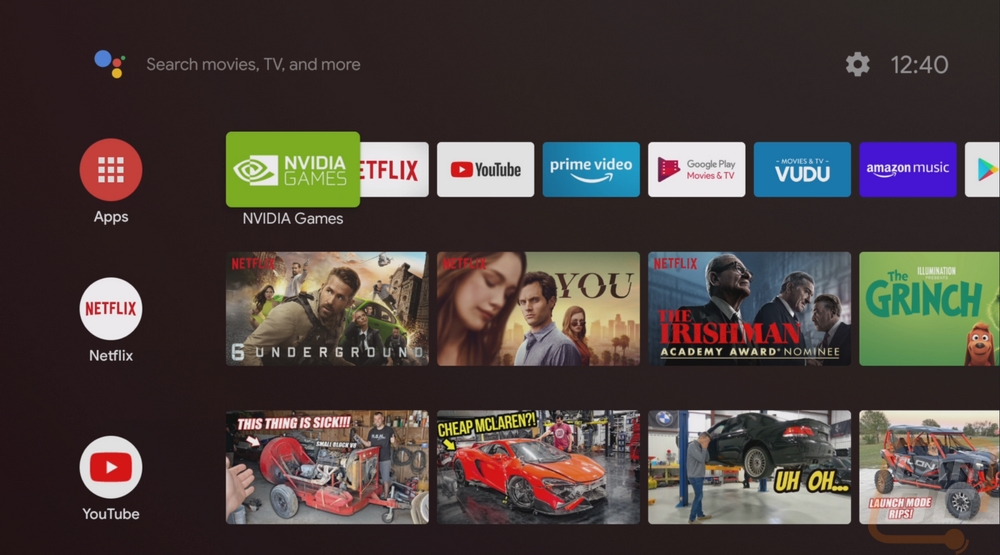 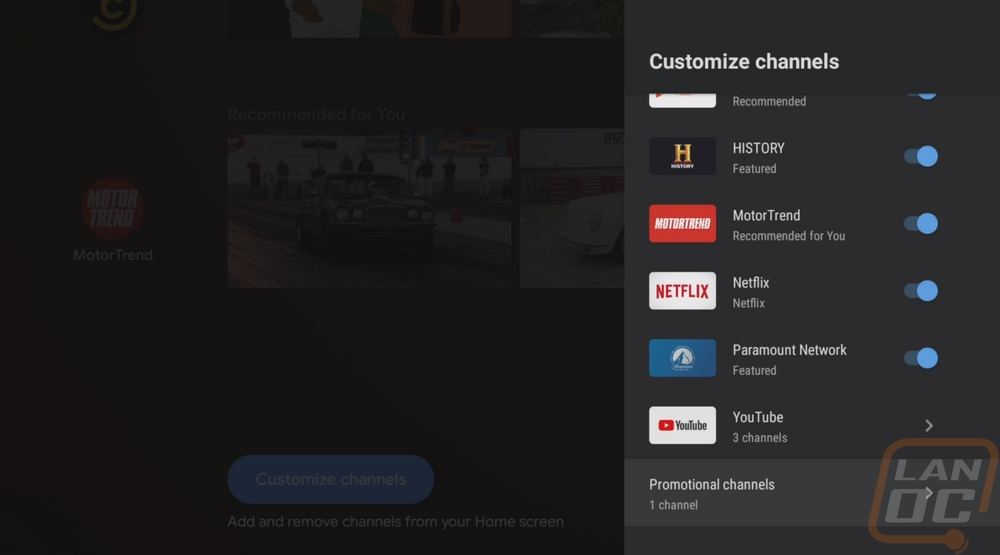 What really sets the Shield TV apart is Nvidia’s game support. This model no longer comes with a game controller, but you can still add one or any Bluetooth device. GeForce Now has been a thing on Shield TV for basically its entire life, but it is now not in Beta. You can play PC games right on the Shield TV using the GPU power from Nvidia’s server farms including free to play games like League of Legends even. Of course, having USB hookups would make this easier for a keyboard and mouse but Bluetooth devices will still work and are your only option now. 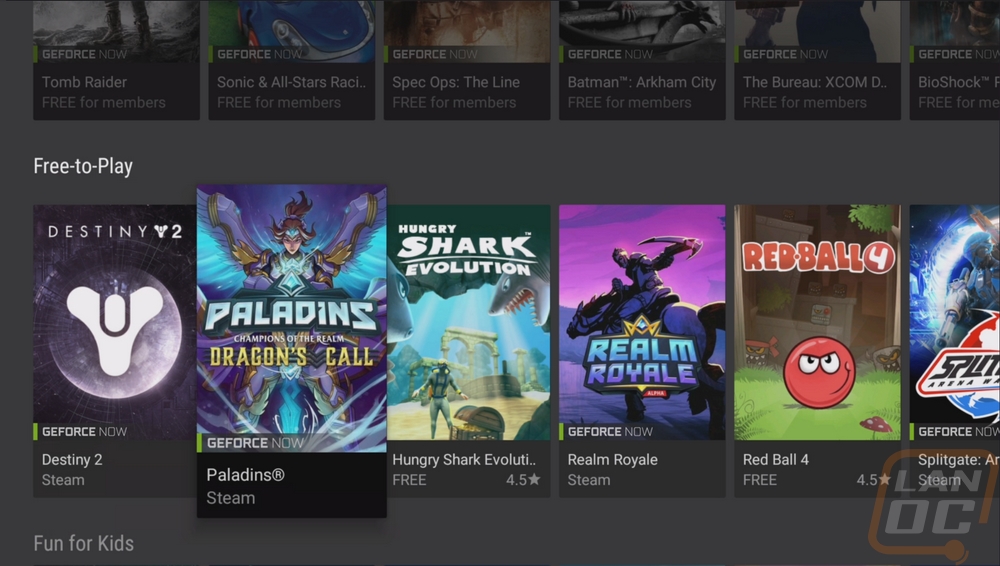 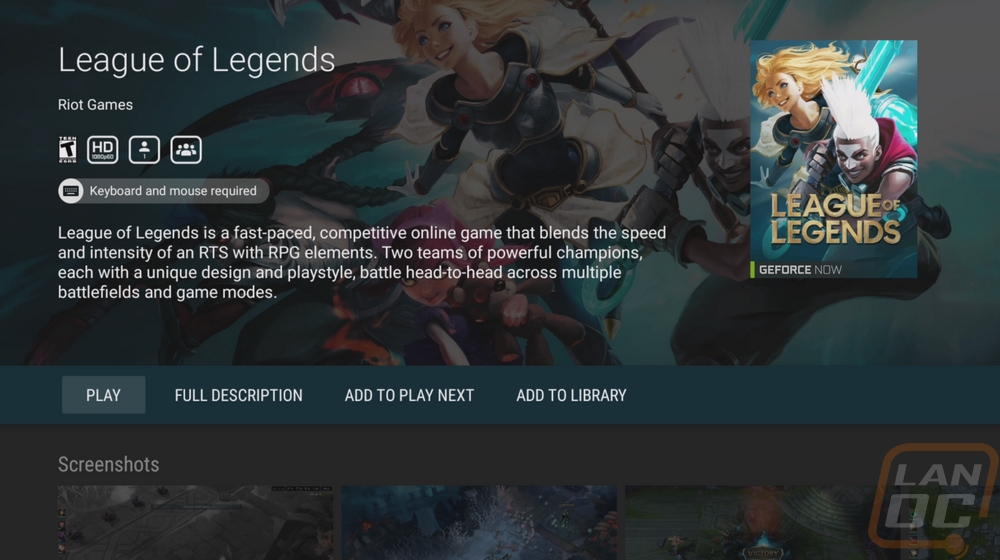 I also have a basic video that shows all of the options for anyone who is curious what is available. You will notice a few cool things in here. For one 4k with HDR is supported on the device with any app that supports it. You can also control your TV or use your TV to control the Shield TV using HDMI CEC which is a feature I’ve used a lot in the past. There is also support for IR Control which if I remember correctly was only for your soundbar or receiver on the past model but IR for your TV is now supported as well which is nice now that there is a power button on the remote to turn everything on and off. HDMI CEC support on the 2017 model was great but got buggy on our TV and I often have to turn them both on and off multiple times to get everything on and talking which because the remote didn’t have a power button had me using Google Home voice controls to turn it off. Nvidia has AI upscaling for content that isn’t 4k and they have settings to help control how that is handled to dial things in.