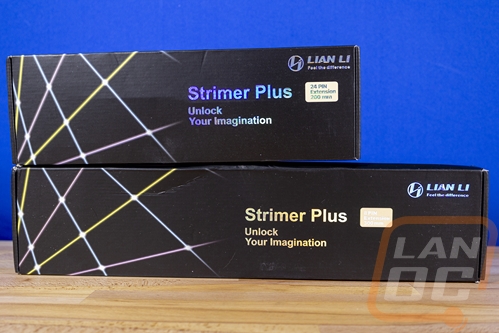 So like I said earlier, the Strimer Plus 8 and 24 from Lian Li aren’t overly complicated. You get cable extensions for your motherboard 24 pin and your two 6+2 plugs for video cards that are covered in addressable RGB lighting. You will notice that the CPU power extension which is normally an option for cable extensions, isn’t available as a Strimer Plus. That is simply because it is hardly visible and the tight bends that cable needs aren’t possible with this setup. Which is the first downside for the Strimer Plus, all of the cables are a LOT stiffer than a normal extension cable. It isn’t anything that can’t be worked around, but at least with the 24-pin, you might have to bring it out of a different hole than you normally would.

I was impressed with the lighting being bright and vibrant all the way through the cable and adding addressable lighting this time around compared to the original Strimer is a huge improvement. The idea is extremely unique, and with that, it is also going to be very hot and cold. If you love RGB lighting you may like it, but if you are already not of fan of RGB this is going to be your first example of how things have gone way too far. I like that Lian Li included a controller with the Strimer Plus 24 to allow control even if you don’t have a motherboard that supports addressable LEDs or if you have already used your one header up. That said, even with the 18 different lighting modes, 7 colors as well as multi-color effects, and speed/brightness controls. You will still get more control with a software controller like on your motherboard. With that, you can do more colors, like orange which was missing from the default colors, and you can do effects using your choice of color combinations where the controller only has single color OR rainbow effects. I think they should have included Velcro or sticky tape to install the controller as well. I also think the controller button labels could be more clear without having to refer to the instructions.

Honestly, you most likely already knew if you would love or hate the Strimer Plus 24 and 8 the first time you saw a picture of them in action. I think even in the RGB lovers camp people who want this much lighting are going to be a small camp. But I am glad that Lian Li offers them as an option. This is a quick way to add RGB lighting into an older build or to go crazy with a build that you can see from the moon. The extensions aren’t exactly cheap. The 24 pin model will run you $59.99 which includes the controller and getting the matching VGA cable is $39.99 which is a lot of money but no more than a set of crazy addressable RGB fans would run you. 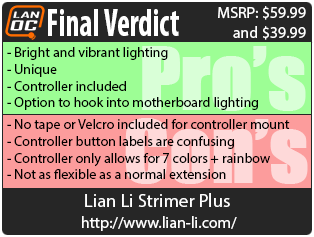 You might call him obsessed or just a hardcore geek. Wes's obsession with gaming hardware and gadgets isn't anything new, he could be found taking things apart even as a child. When not poking around in PC's he can be found playing League of Legends, Awesomenauts, or Civilization 5 or watching a wide variety of TV shows and Movies. A car guy at heart, the same things that draw him into tweaking cars apply when building good looking fast computers. If you are interested in writing for Wes here at LanOC you can reach out to him directly using our contact form.
Discuss this article
Log in to comment
Posts in discussion: Lian Li Strimer Plus

We have 1784 guests and one member online