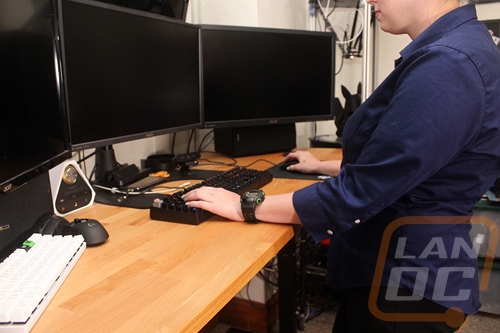 So before I show the upgraded desk, I did want to give a few comparison shots of what my desk looked like prior to adding the new Autonomous SmartDesk base to it. The setup is a build your own desk from Ikea with the top being their Gerton table top and then four square stainless steel legs. When I originally built the desk I also added two power strips and a hanging wire management tray under the desk as well. Now over time, the wires have become a bit of a mess, but the hanger has done a good job of keeping everything in one place and out of the way from hanging down and getting kicked. The tray also allowed me to quickly transition to the sit/stand base because most people don’t consider their wiring when looking to move to this configuration. You need to have a setup that has the leeway to move with the desk. In my case, I have a powered hub under my desk just for charging phones and other devices and a second USB hub for everything on my desk that is USB to keep it to just one USB cable going to my PC. So going from my desk to my PC are four display cables and the USB, then, of course, there is a power cable going from the desk to the wall as well. 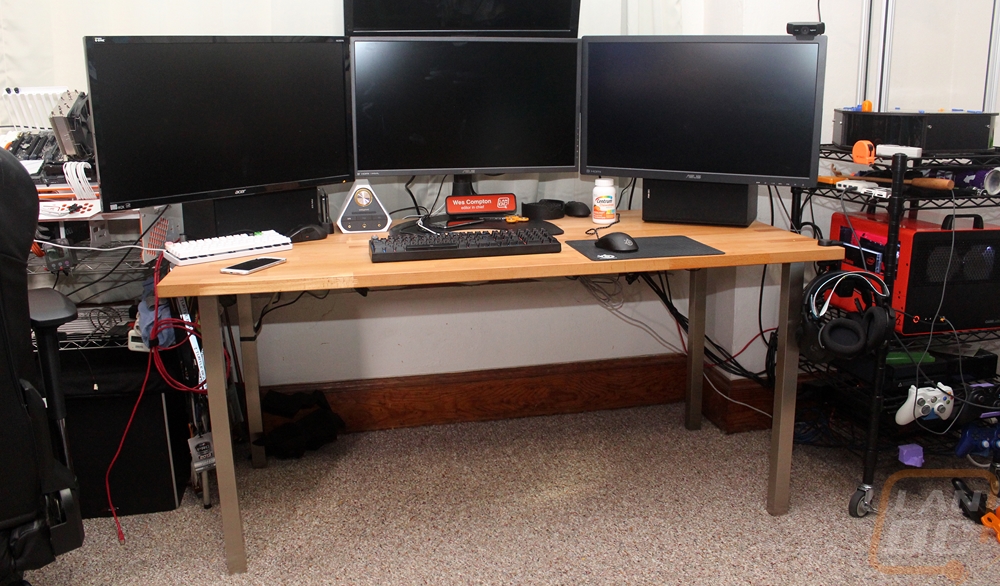 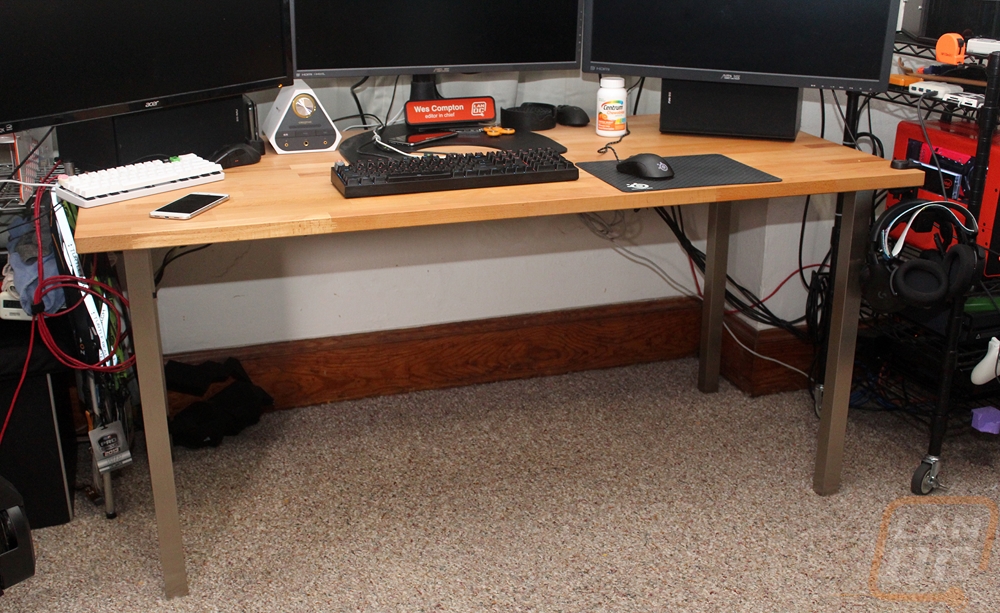 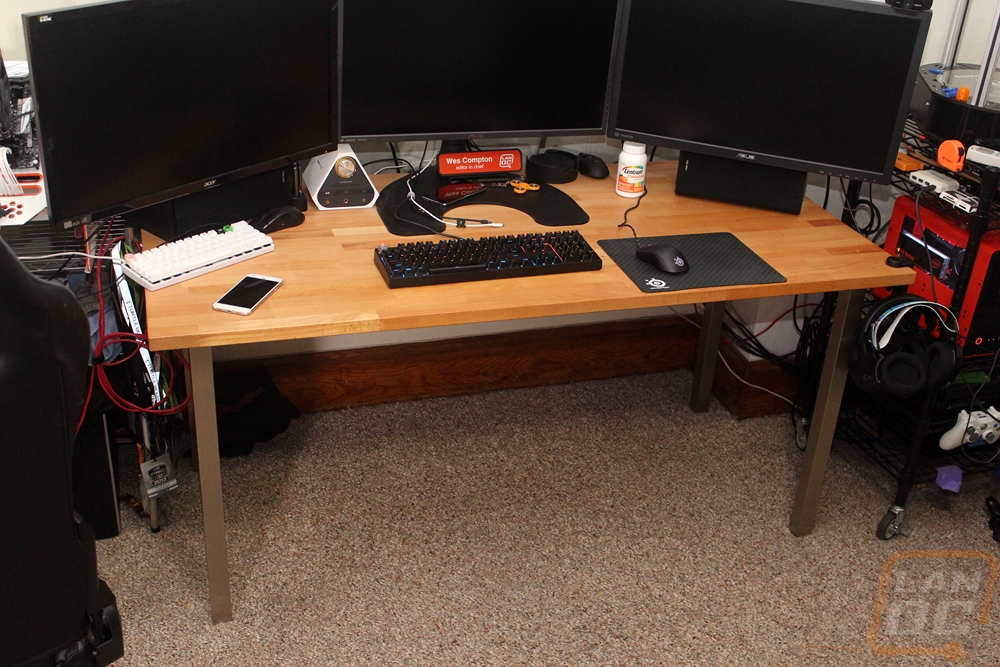 The new base once installed looks amazing. The black ended up being a good choice when though gray was my primary color and it went well in the office and with the light colors solid wood table top. With the base just using two legs where my desk previously had four, it actually opened up room for me as well when moving my legs around or turning my chair. The wiring is still in need of more cleaning up so please don’t judge me too much but it was at least functional right out of the hole. 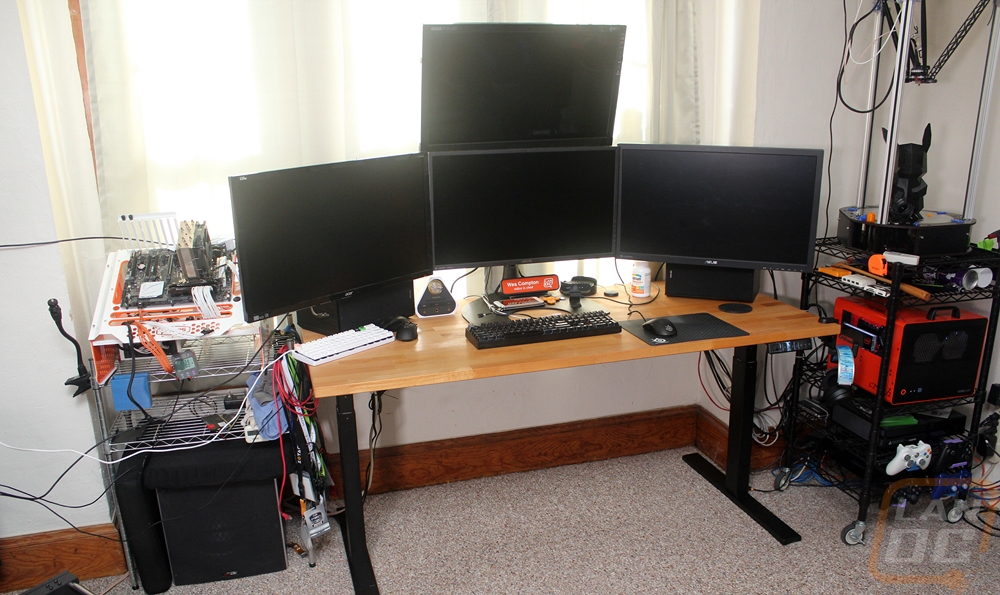 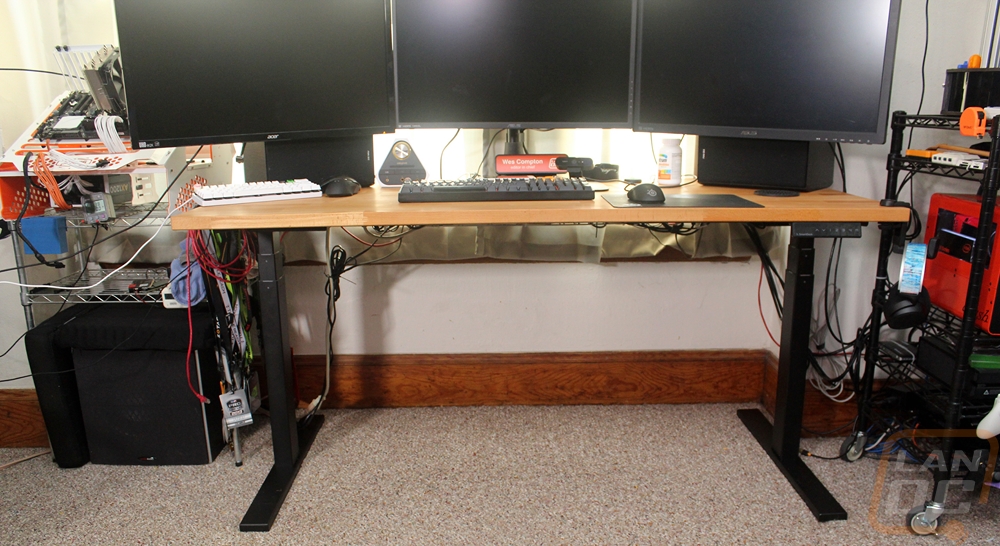 I was able to set my sitting height a little higher than my desk was originally to be more comfortable for me but what really impressed me was the overall range. The business edition that I went with has a lower base height and a higher total height than the Home Edition with it going down to 24 inches and up to 51. At 24 inches it Is actually functional to sit on the floor or for a small kid to use the table and at its full height I was starting to get worried about my top monitor getting up to the ceiling. Look at the photos below, it actually started to make my SeeMeCNC Rostock MAX v3 look short when the spools on top are hard for me to reach sometimes. 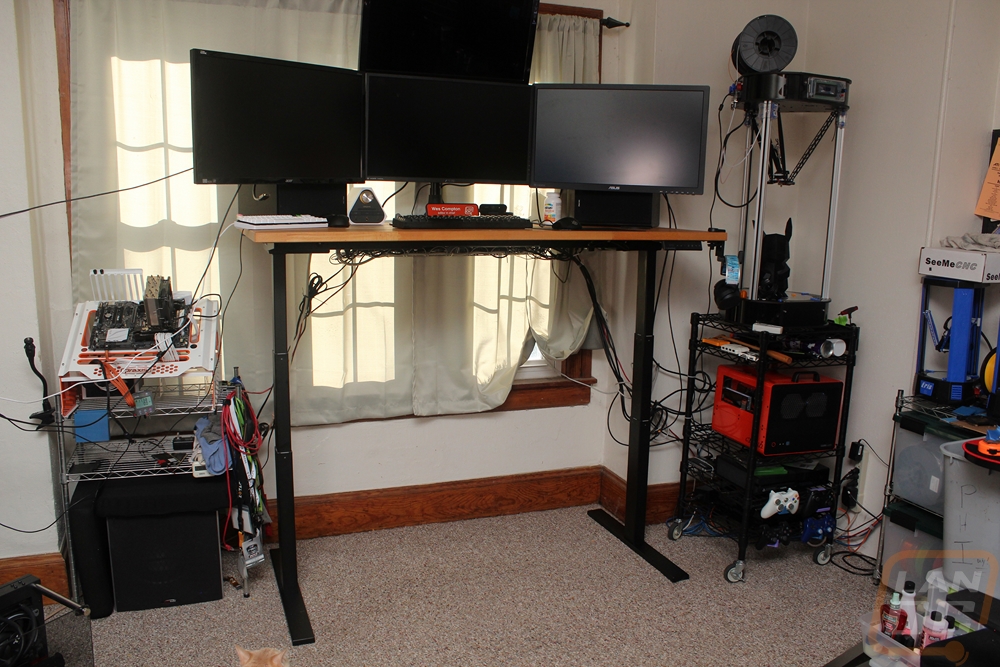 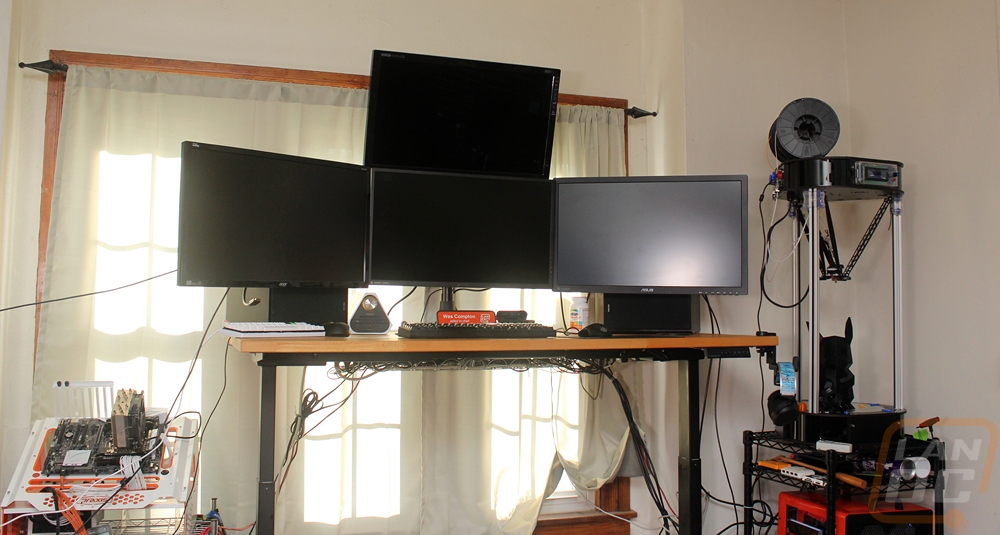 The controller was simple to use right from the start. You have a height readout over on the left, up and down buttons for manual control, four presets, then a programming button. You set the height you want, hold M for a few seconds then pick the preset you want that height to be programmed. My wife has her own desk and rarely needs to use mine so I programmed both sitting and standing heights for me as 2 and 3 and then just to mess around I programmed 1 to the lowest point and 4 to the highest. I will most likely find other uses for those later but they are mostly so a desk can be used by two or more people. You could have sit and stand heights for two people or one sit height for everyone and three stand heights if the desk gets used by more people.

With the digital readout, I was just expecting some random numbers or a 0 – 100% height but I was surprised that they went with a reach height measurement. I busted out the measuring tape to see how close it was and I was surprised to find it so close with the difference easily counted for by the adjustment in the feet or the carpet this desk was installed on.

So how did it all perform? Well obviously this is my main desk that I am at almost day and night so I spent a lot of time with the configuration prior to writing this. After initially setting everything up I noted that the new desk was noticeably more solid than my previous setup. There is still a small amount of wiggle, especially at full height but I wasn’t expecting it to be perfect. It is on padded carpet and with all of the monitors on the desk, there is a lot of weight. Even before getting into the standing portion of testing I did love that I could finally set the height perfectly for me when sitting. 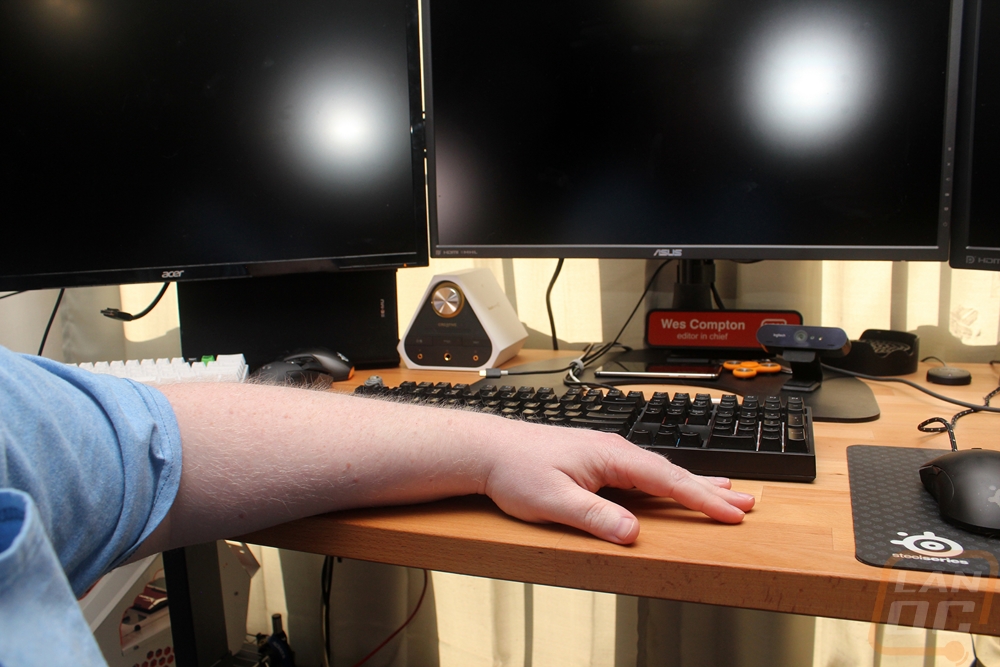 I also had my wife try it out, not giving her any instructions on how everything worked and she had it all figured out in no time at all. She looked better in the photos as well so most of our action shots are with her using the desk, though I did most of the testing. 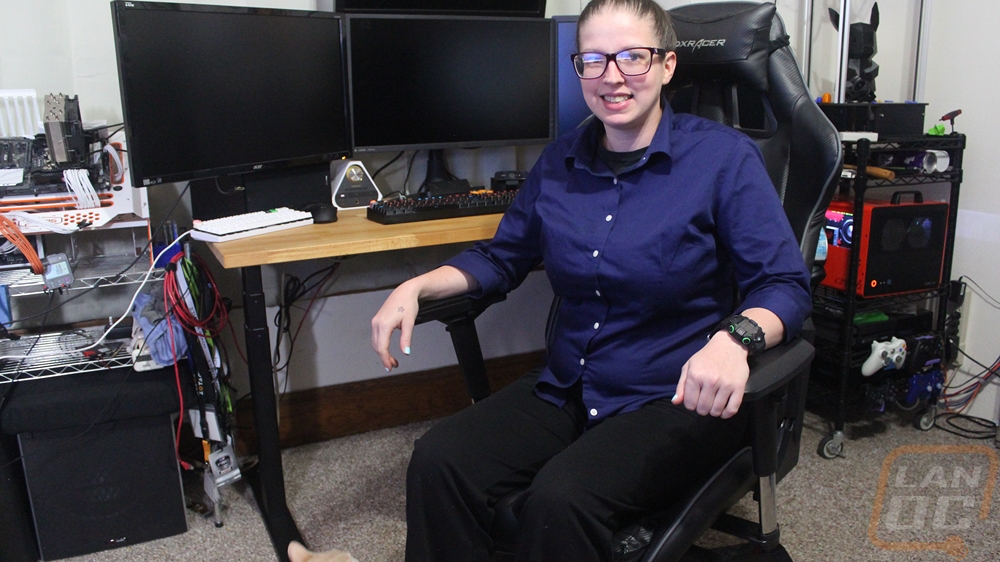 For me when I started off I really wanted to toy with it moving it up and down often and for any reason at all. After a few weeks that calmed down and I started to get into more of a pattern. The truth is I want to spend more time standing but it has been a slow transition for someone who is used to sitting all day and night. What I did though was go to standing mode after coming back from a break or when working in other areas in the office. For example, when taking photos I would come back to my computer and start editing while standing. I did the same when doing light browsing, why sit down when I just need to look something up. Then from time to time, I could also swap to standing mode just to get me out of the chair and to get some blood pumping. In the past, I would just walk around the house, and I still do that, but this way I could also stand while continuing what I was working on. 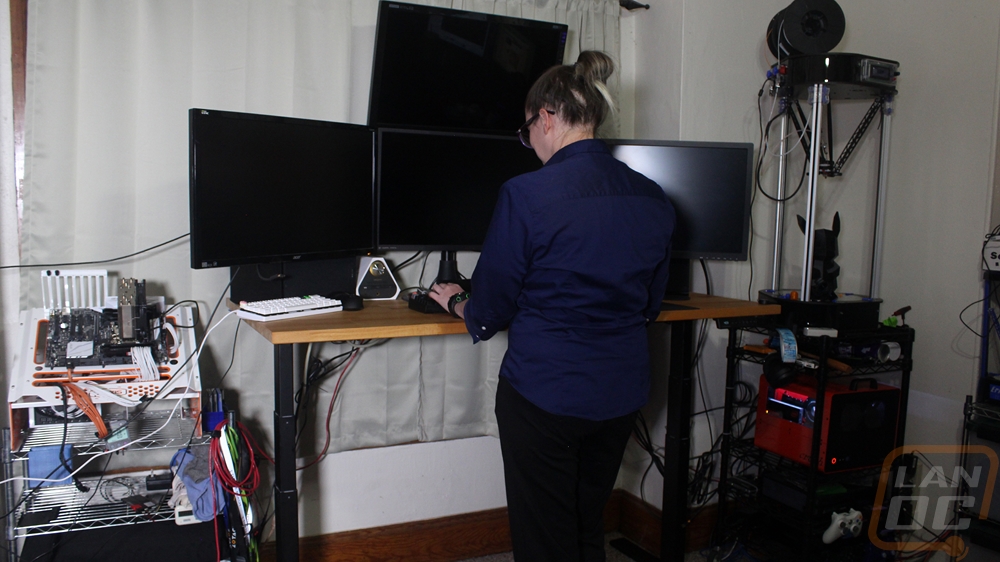 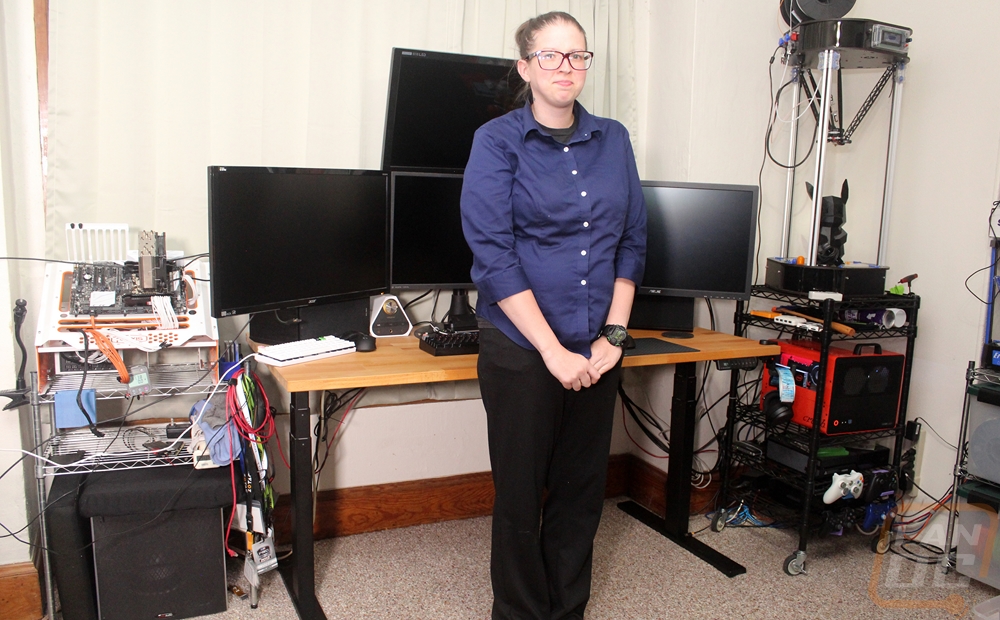 On the other end of the spectrum, I did also find the lower heights useful as well. If watching a long video I could quickly drop the desk down and kick back with my feet up. Of course this would completely set off my wife and frankly, it is the exact opposite of what the desk should be bringing out, but it did work. The big range allowed my wife to walk up and set the desk to her height and when I had kids visiting I could even drop it down to a height that worked perfectly for them to game. The only issue I ran into there was with the control panel because it sticks out it can be bumped. One of the kids was pointing out something on the screen and bumped the control panel and raised us into standing mode. But that was the only time that ever happened, otherwise, the buttons were easy to use. 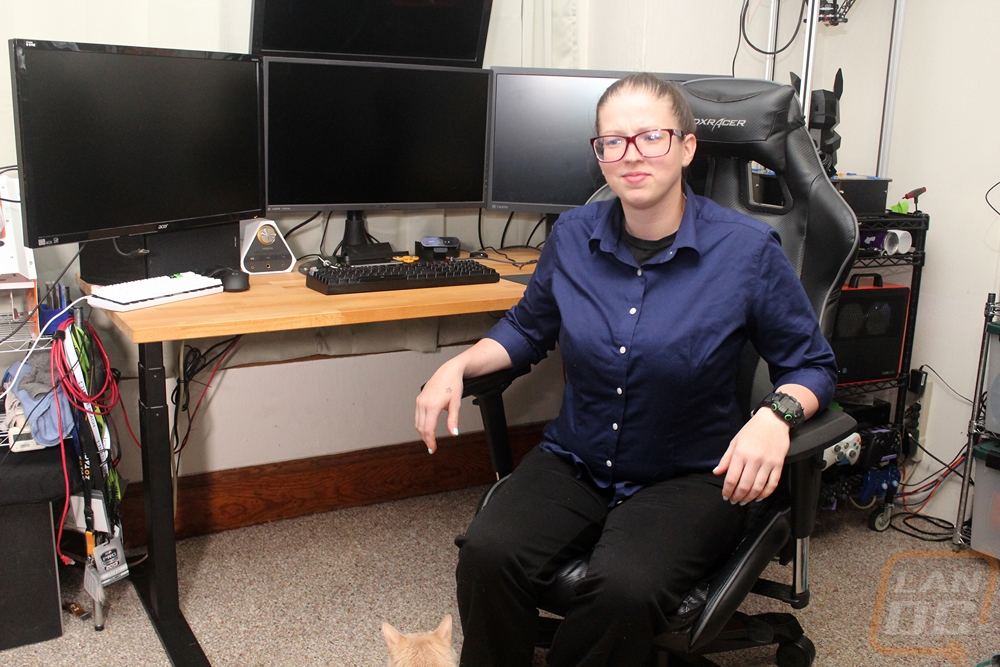 I was really concerned with how things would work when transitioning the desk between modes. Obviously, I planned out my cables ahead of time, knowing they would need to be able to reach to the standing height or drop down low. But how would things on my desk work, would they move around? Well, when moving there wasn’t any vibration or movement that caused things to move. The business edition does move at a faster speed than the home edition, 2.3 inches a second over 1 inch a second so the moves were quick. They were also surprisingly quiet, you can hear the motors but it wouldn’t disrupt work in a shared office or be any worse than someone typing. I did find the stops to be a little jarring though with the additional speed. It was enough to shake my monitors a little but not bang anything around. I did notice that the controller does slow down the move when you get close to the top and bottom, it would be really cool if it did the same when getting close to your presets. It seems like it could be a firmware update even given that the hardware is already capable of it. The only other issue I noticed in testing was that keeping the desk in one specific mode for a while did sometimes mean when you first move it again it would stick just a little bit. It would always come free but it was noticeable each time it happened. 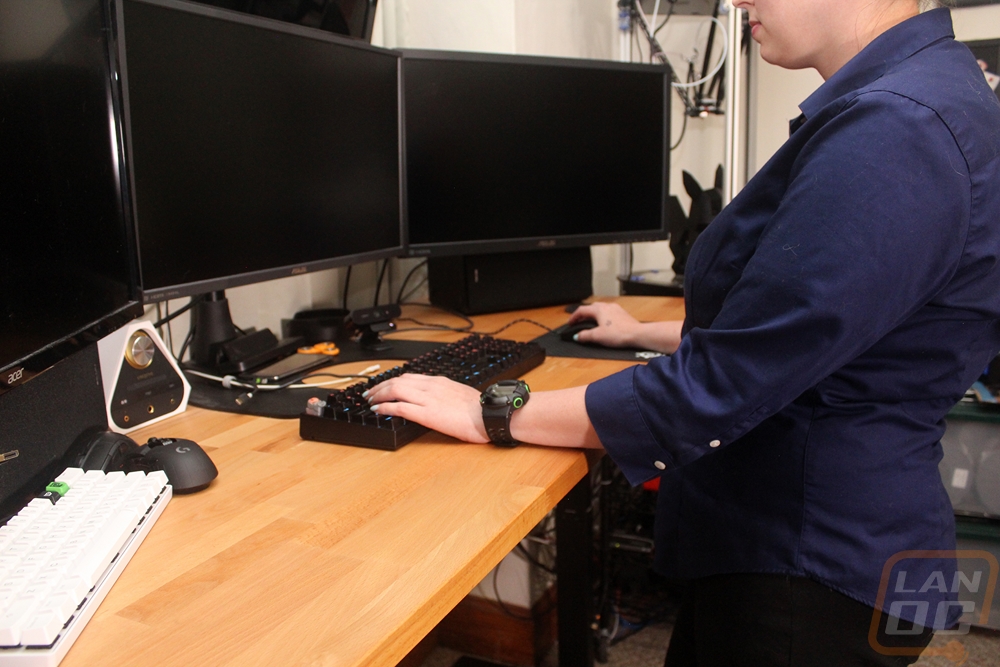