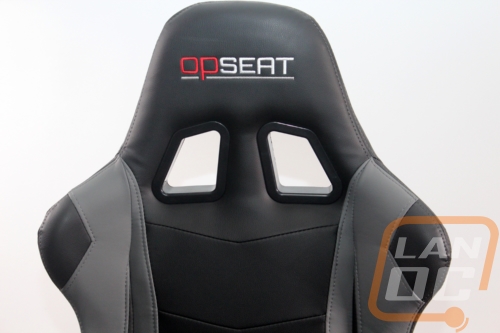 So with the OPSeat Master Series, I felt a bit like a broken record because multiple times I had to point out that the chair looks and performs a lot like the rest of the racing themed gaming chairs. In some situations it would be a bad thing for it to not really stand out from the crowd when it comes to styling or performance but OPSeat has one thing going for them that most don’t With an MSRP of $219 and shipping costs of $20 it comes in a lot cheaper than most of the other gaming chairs on the market. Because of that being comparable in comfort and style at a much lower price is huge if you ask me. Beyond that price, I really liked the wide variety of color options available from OPSeat. They also didn’t go too overboard with the styling like some of the chairs. I even really dig the OPSeat branding as aa whole, it’s one of only a few chair brands that actually focused their branding on gaming itself, not having a racing themed name with a focus on gaming like DXRacer for example.

For downsides, I do wish OPSeat had options for bigger guys. One of the sad truths of gamers is there are more unhealthy or just big framed people. Finding chairs as a big guy is hard, finding them with the racing style is even harder. My only other issue was the problem we originally had with the chair not tilting, but OPSeat quickly sent a replacement and took care of it.

Overall I think OPSeat falls in the middle of the pack for feature and styling but because of their pricing, it puts them in a unique class. There are a few other chairs at the same price point, but none seem to match the benchmark of the popular brands like DXRacer that OPSeat does. They even do it at a price that is $80 less. 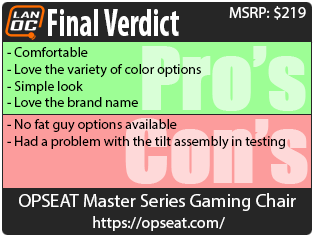 We have 1406 guests and one member online