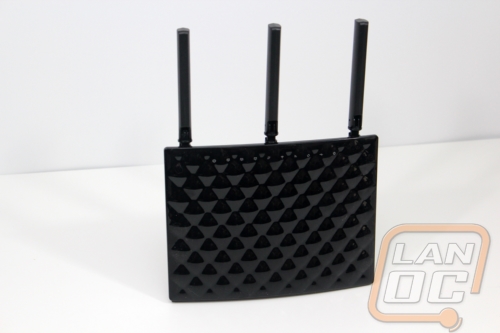 So let’s recap the highs and lows from our testing of the AC15. For starters I was impressed with the Wireless AC performance, especially in a house that is known for having very bad reception and wireless speed. I did run into a few issues, especially when hooking up the AC15. The power cord that was provided was short and wouldn’t reach anywhere near where I normally keep my router. I also had issues with a few of my network cables being loose and pulling out of the back of the AC15 if I wasn’t careful, so keep an eye on that. Beyond that, really my only other complaint was the lack of an option to turn the AC15 into a wireless access point. This is important to me because some people might run into issues in the future when their internet provider brings in a modem that forces you to use their built in router.

The AC15 doesn’t take up a big footprint and beyond the glossy finish on the front I think it looks good. Where it stood out the most though was just how simple the software was. They focused on making things easy for the everyday user to be able to navigate and with that I think they were successful. Power users may not like that though, a lot of the features are hidden in the advanced settings or have been renamed to make them clearer.

The biggest pro for the Tenda AC15 though is its price point. Most of the time you will find Wireless AC routers between $100 and $200 but the AC15 is selling for $83.99. It is missing a few of the features of the higher end routers, but for the price you are getting a good deal. Being a relatively unknown company we will have to wait longer to find out If Tenda’s quality is up to pair with the competition. But as far as its software and performance goes it is right up there. Because of that it would make for a cheap router for someone who needs Wireless AC performance. 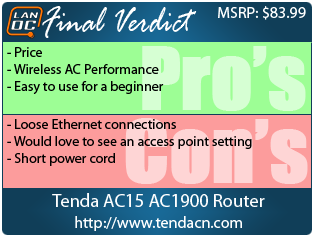 You might call him obsessed or just a hardcore geek. Wes's obsession with gaming hardware and gadgets isn't anything new, he could be found taking things apart even as a child. When not poking around in PC's he can be found playing League of Legends, Awesomenauts, or Civilization 5 or watching a wide variety of TV shows and Movies. A car guy at heart, the same things that draw him into tweaking cars apply when building good looking fast computers. If you are interested in writing for Wes here at LanOC you can reach out to him directly using our contact form.
Discuss this article
Log in to comment
Posts in discussion: Tenda AC15 AC1900 Router

We have 1406 guests and one member online