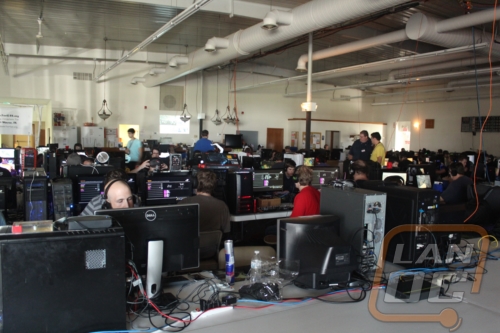 I arrived at the LanOC office around 1:00 AM or so Friday morning to join Chad, Debo, and Wes in an informal review of what would be the next few days, better known as LanOC v15.0. We quickly decided, influenced largely by late-night appetites, that it was a discussion better had over food. Van Wert is not known for its nightlife, so we started out East (the way I had just came) in search of food. We found ourselves at a Denny’s off of US 30, conversing with the third shift waitress about how Debo reminded her of her daughter (they both hate everything). With full stomachs, a game plan, and most importantly a new nickname for Debo (Shelby), we returned home before the sun came up to catch a few hours of sleep.

The only downside to beating our previous record of prizes is loading them to take the to venue. In ninety-some degree weather. Thanks to the help from staff and several other generous friends roped in by association thereof, we formed a fairly impressive assembly line fueled by energy drinks and cereal bars. Our company grew as we reached the building, unloading was done within a few trips and the event floor was constructed faster than I’ve seen yet. We took a quick break for dinner, and then returned to drape power and network cables from the ceiling and along the floor. 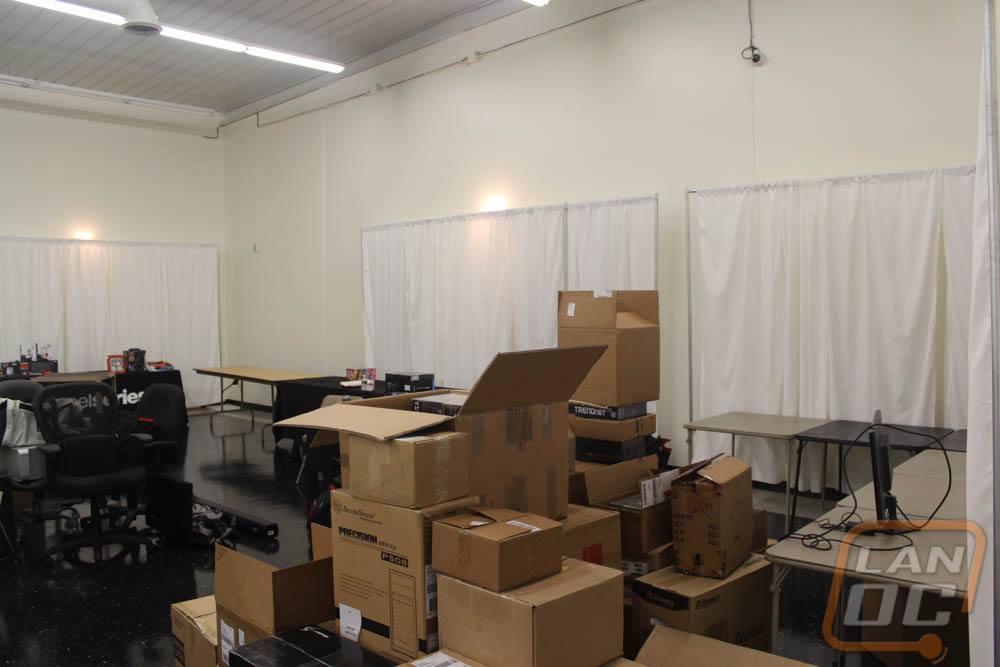 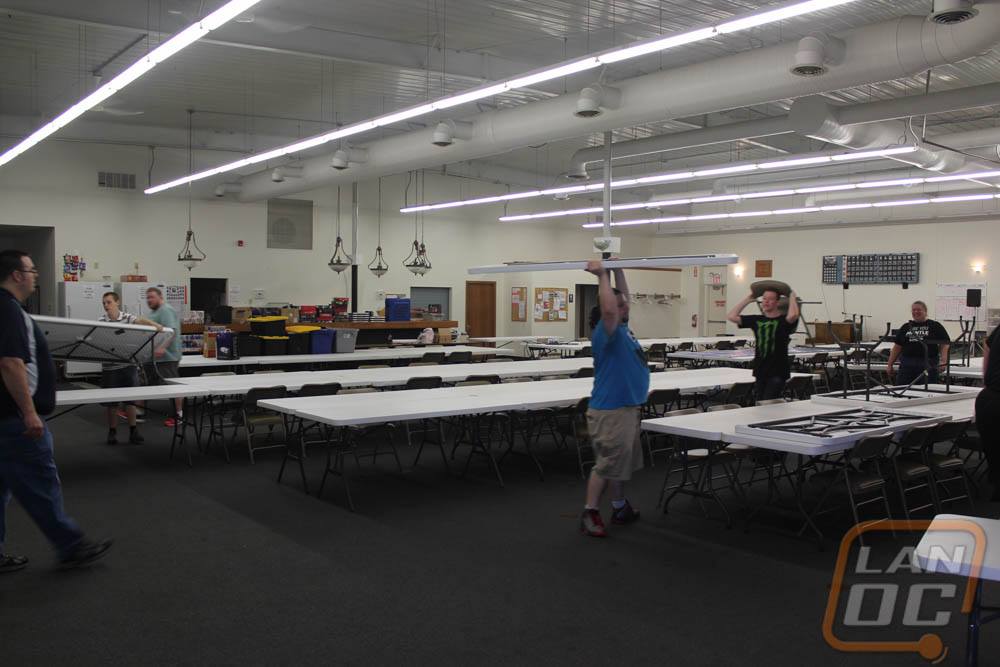 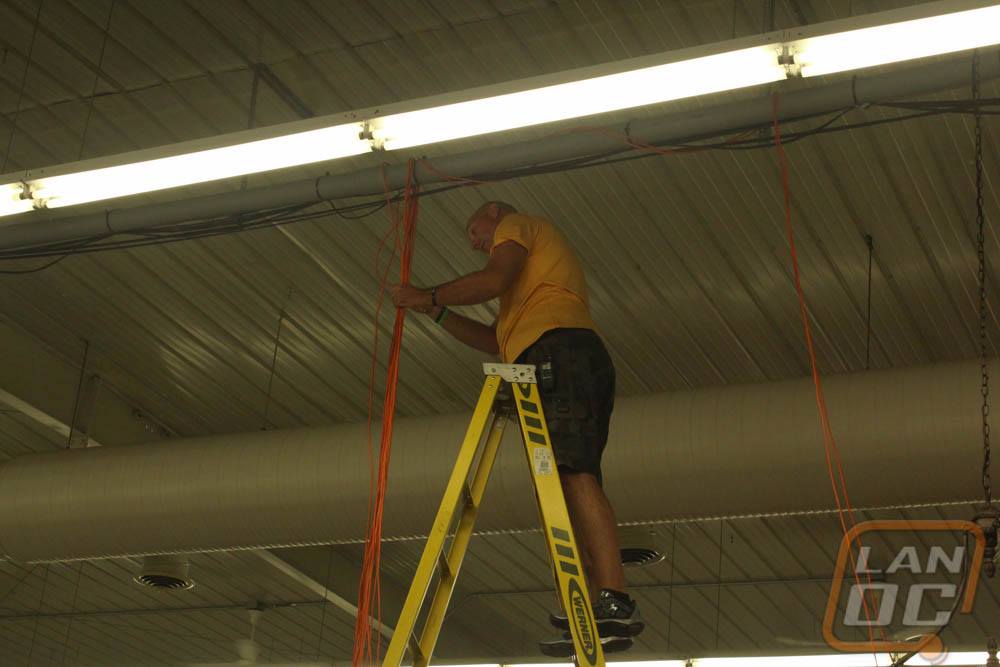 It was at this point that those who volunteered their time to help were rewarded. As soon as we had power and network to tables, we had people tapping into a very under-utilized network to game. We put the finishing touches on the building, anxious to get a little gaming in ourselves before calling it a night (we do need to test the network, right?) and returned home. Within a few hours we would be back and filling Council on Ageing building with computers. 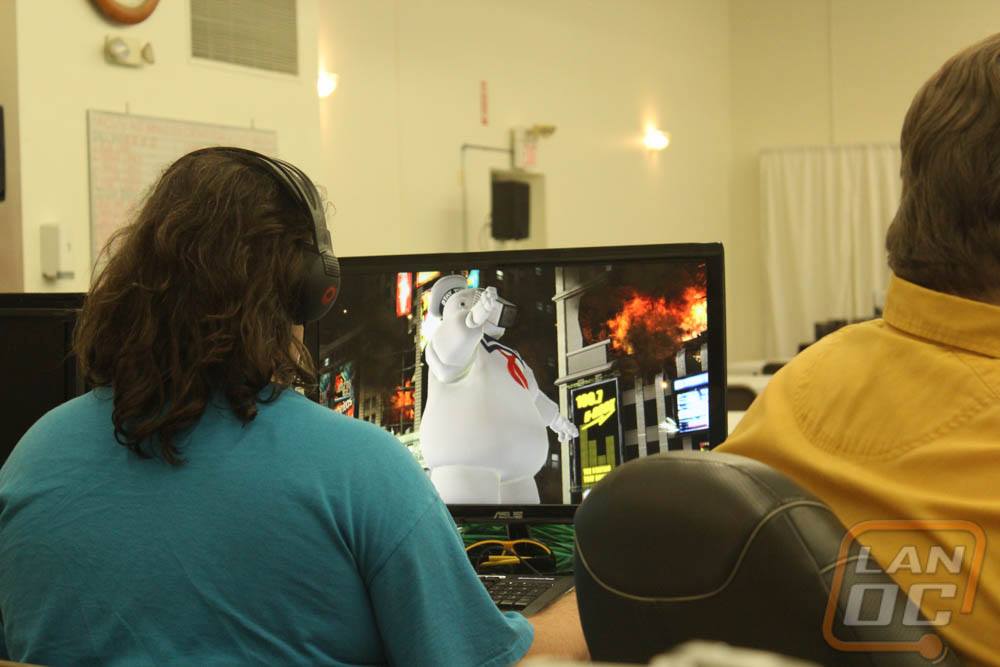 Despite some potential storms (the power actually did flicker a few times the night before), the weather cooperated for the event and was beautiful all weekend. Setting up for our LANs is pretty close to a science these days: grab your badge, grab a swag bag, and grab a seat. I’m starting to remember names as Alex and I have been checking people in the past few events, and its great to see veterans and first timers alike. Not only attendees, but sponsors as well. You really have to see one of our events in person to understand how awesome our community is, and likewise we can only express our appreciation so much in text. It was great to have SteelSeries and DX Racer join us this year, thanks to Travis and Mallory, and Jill and John for coming out to game with us and bringing some gear to give away. I think Ed from Sapphire is considered a veteran at this point; the event just wouldn’t be the same without you. Thanks also to your wife Lisa and son Raymond for joining us, too. We can only hope to be as fortunate to have such an awesome family who games together. 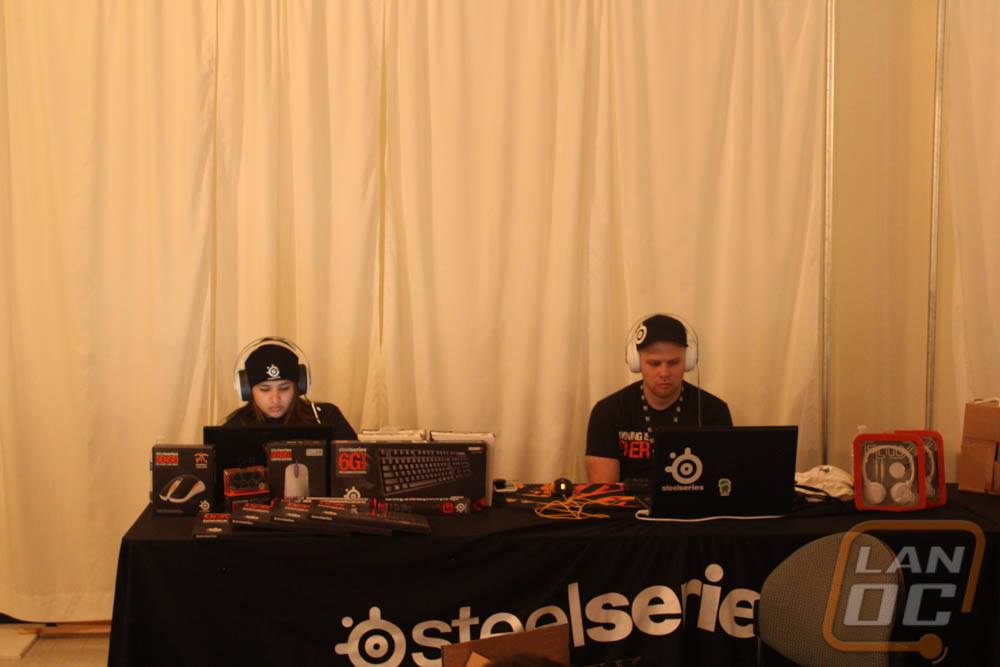 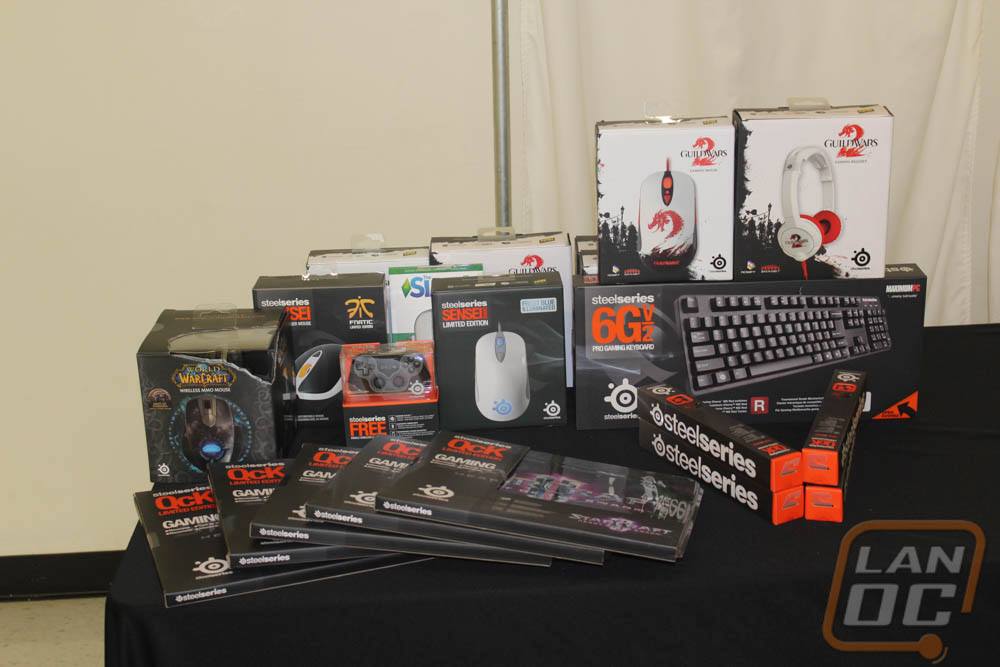 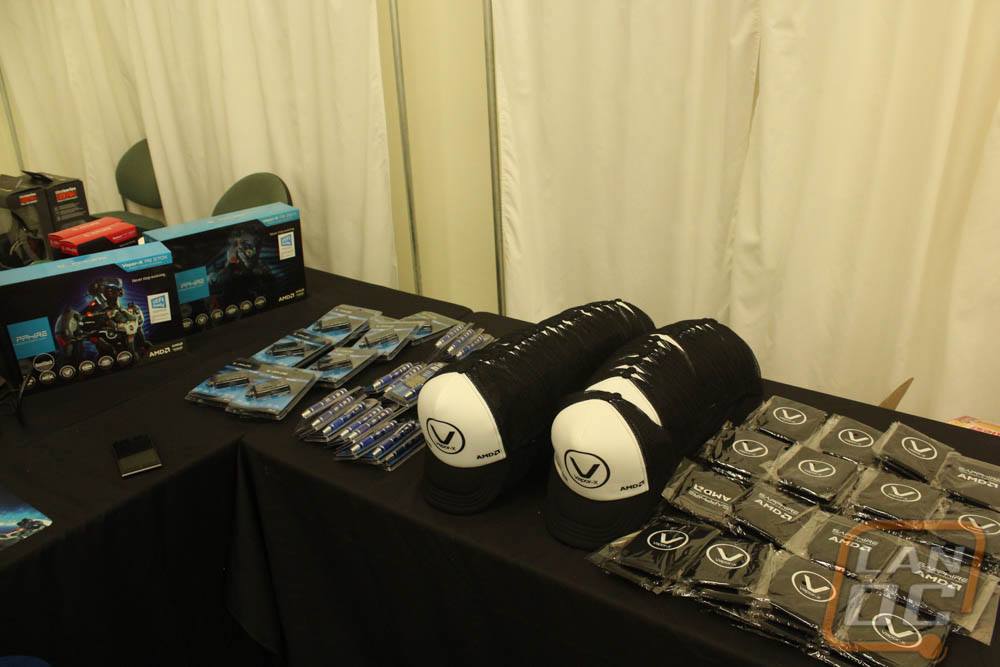 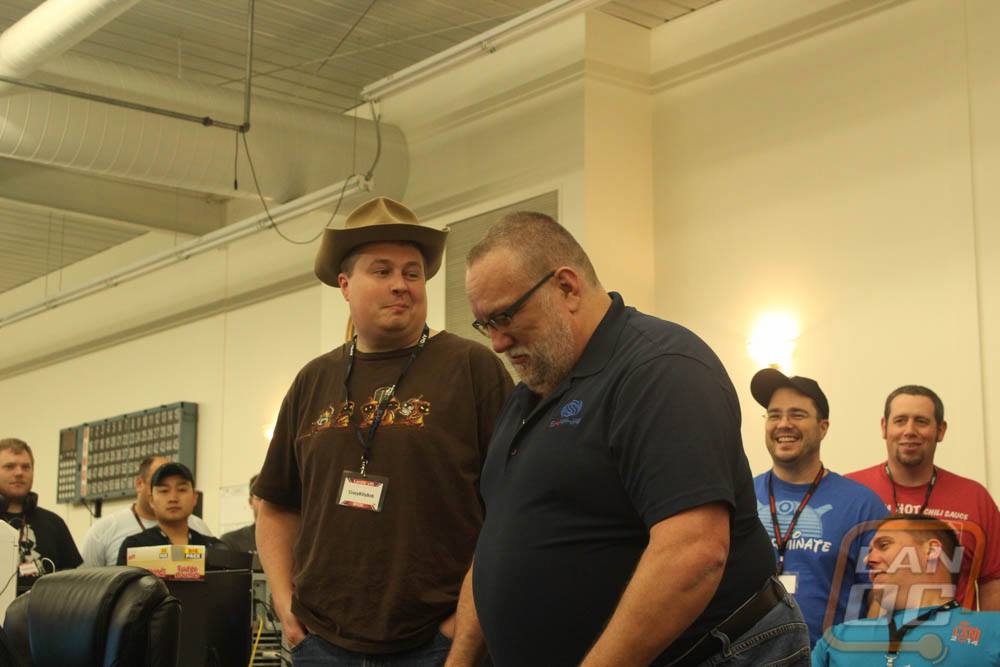 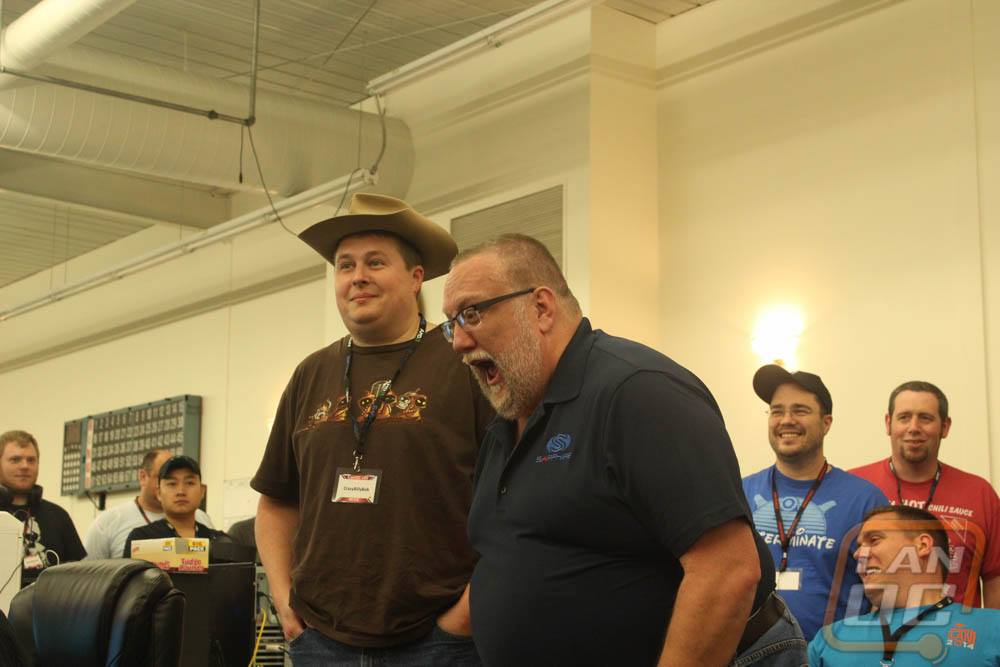 For those who may not be aware, our tournament titles are selected by popular vote, and League of Legends has certainly not lost any demand. From the first-person perspective, Counter-Strike: Global Offense took the vote while Dirt: Showdown and Hearthstone finished first in the remaining categories. Once again we hosted both random team and bring-your-own-team (BYOT) versions of LoL and CS:GO, and had a great turn out for each. Despite the Riot servers encountering some issues dangerously close to the start of our tournament, we managed to tame the beast and keep ping down to around 100ms or so. You may not appreciate how difficult that is to achieve in a LAN situation with 135+ gamers vying for limited bandwidth, but Gaston put in an untrackable amount of hours tweaking traffic shaping and optimizations to make it run smoothly. There were a few unavoidable quarks here and there, but this is the first event I can say that they were resolved within minutes of being reported. 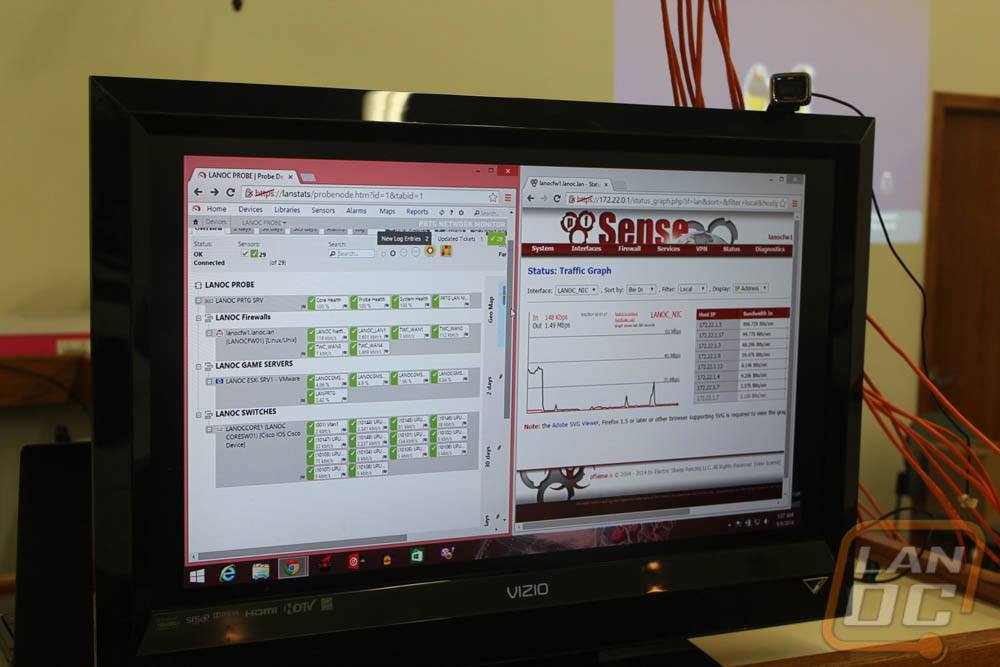 Managing simultaneous tournaments, including hosting servers for CS:GO can be extremely overwhelming, and though I helped where I could Jared once again shouldered the majority of the work. We quickly learned after announcing Hearthstone as a tournament that none of the typical “tournament team” knew much about the card game. Shelby-- er, Debo, stepped up to help us make sure no one was packing aces in their sleeves. Speaking of, Debo was a hard man to find during setup on Friday night, hauling cords back and forth juggling circuits so that everyone had the power they needed. There was one power outage that I was aware of, and that was due to someone accidentally unplugging the entire run from the wall instead of his own strip.

Wes and I had decided even before v14.0 that we wanted to do something “big” for the old school tournament of v15.0, since it was somewhat of a milestone. The idea of the old school event is to re-capture some nostalgia, and Halo: Combat Evolved was revolutionary. I remember everyone playing it, even if you hated first-person shooters you’d have fun lobbing grenades or meleeing your friend in the head. It was actually one of my earliest LAN experiences, although all I cared about at the time was how to get more than four people in the same game. We slowly collected systems and controllers, and we wanted them to be authentic (which are getting pretty hard to find). A week or so before the LAN we finally had three systems and two full sets of controllers so we could system-link, only to find out that two of the three systems didn’t work. We had picked up an extra one as a back-up, but neither was able to actually read disks. One wouldn’t even boot, which we dissected in hopes of having a working optical drive. The photo area of the LanOC office was like an Xbox graveyard, and we were still a console down. We decided to take a road trip to a few used game stores in Dayton, OH to pick one up, along with some other games for our personal collections. 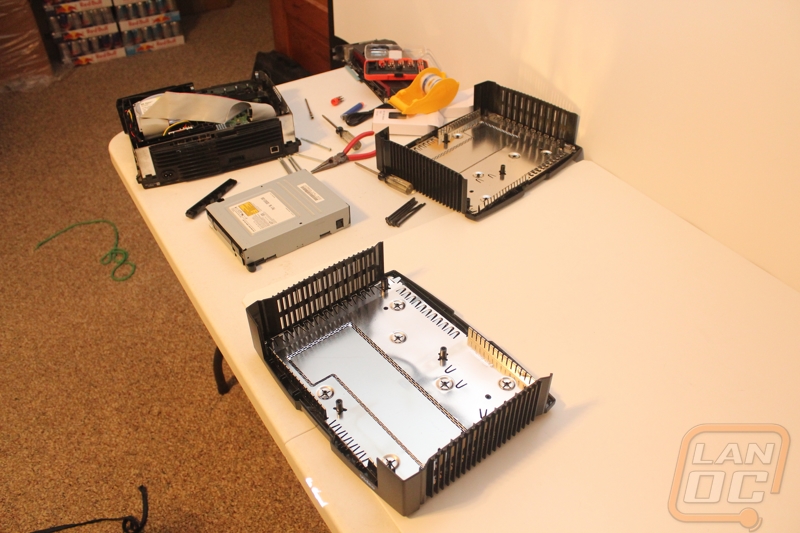 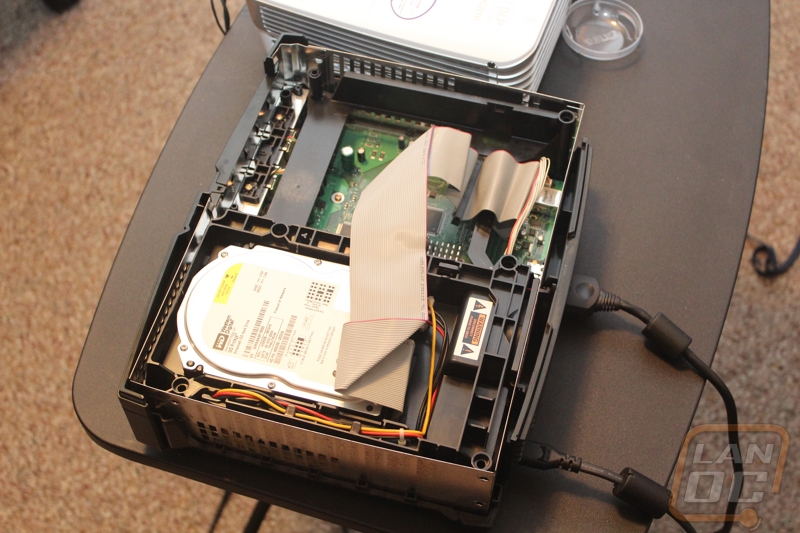 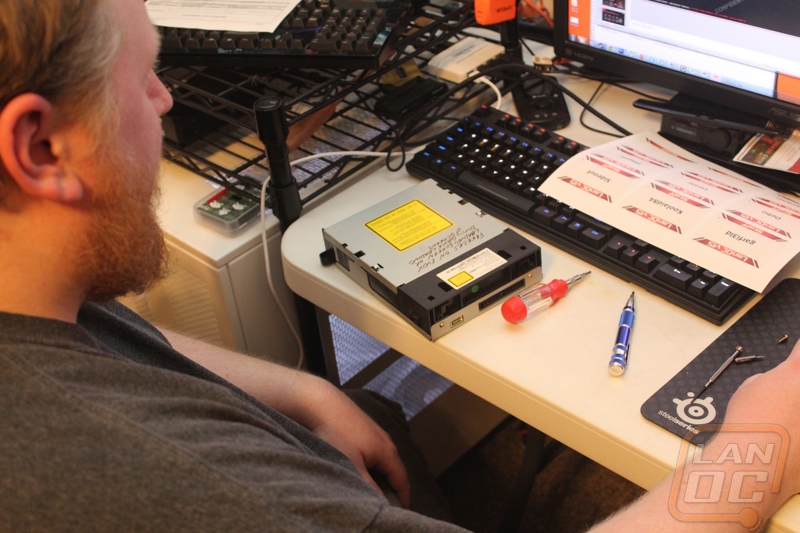 The old school tournament was everything we had hoped for. Grenades flying, rockets exploding, tea-bagging, and that moment post-game where you find out who “Caboose” was, who had been your rival for the past ten minutes. We had anticipated that an eight-player free-for-all would go fairly quick on the smaller maps, and we were right for the first few rounds. By the finals, we were pleasantly surprised by the skill of the players, how much longer they survived and the tactics that allowed them to do so. It was a great game to watch. 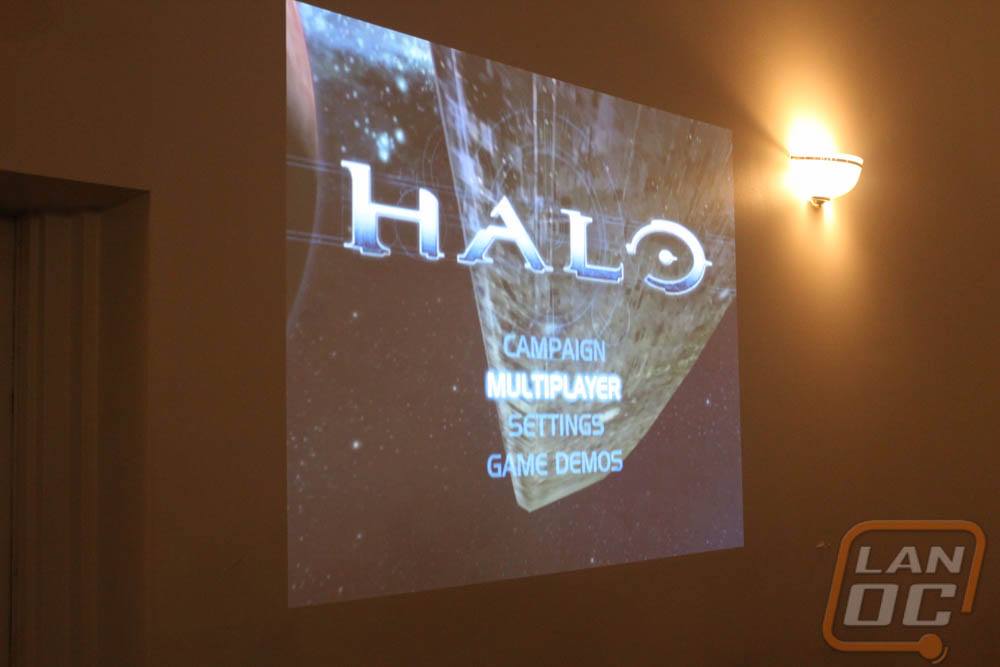 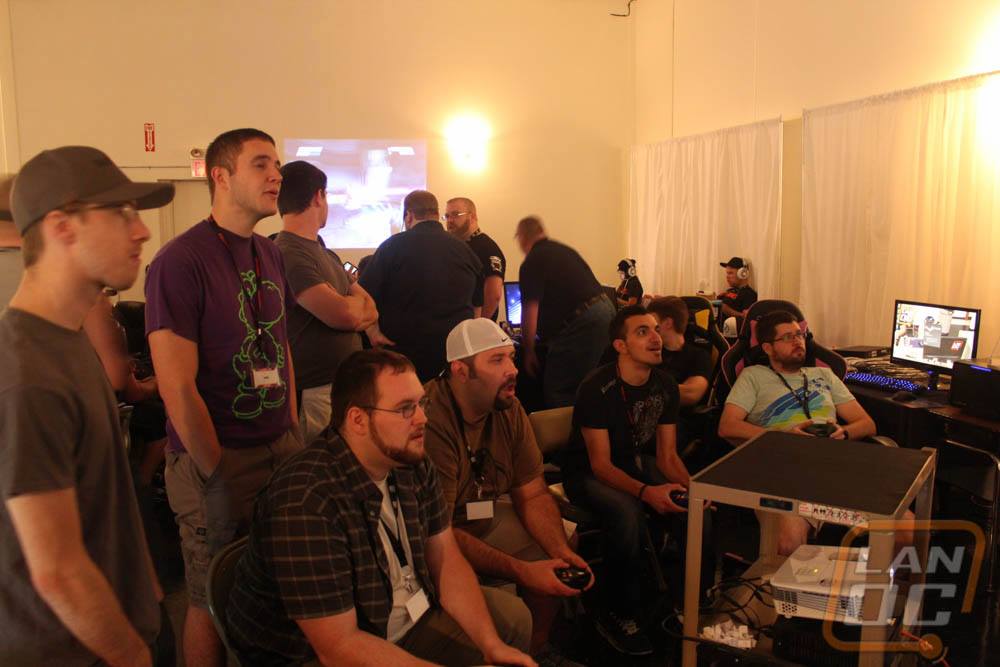 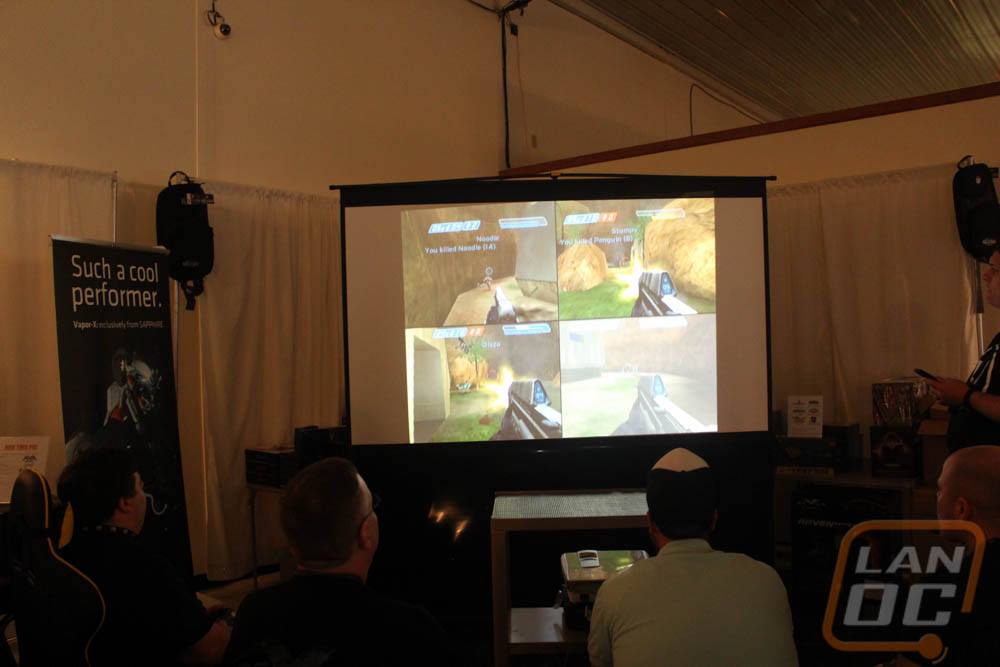 We also had the opportunity to give back to the surrounding community, the start of a habit were going to continue to grow. We have been talking about ideas to help raise money for those in need, specifically close to home, and near the end of v14.0 we really began seeking out possibilities. We had identified the how, which was to build a LAN gaming system to raffle at the event, and a great group of sponsors helped us get there by providing the pieces. We just needed a who, and while there is certainly no absence of causes, we wanted to find something that spoke to us personally. Through Child’s Play, we found the Parkview Children’s Hospital in Fort Wayne, IN and took a look at their wishlist. It was full of things that those of us play with our children every day, and things we played with not long ago (honestly, probably still play with): LEGOs, Nintendo handhelds, the latest Mario game, and so on. But what really stood out, as opposed to the other wishlists this particular one had nothing donated to it yet. The choice was obvious, and we are proud to announce that we were able to raise over $1300, which we’ve used to purchase several of their requested items. Many of us have relied on gaming to make it through tough times, and we hope this will help others in the same way. Our most heartfelt thanks goes out to those who donated towards this cause. 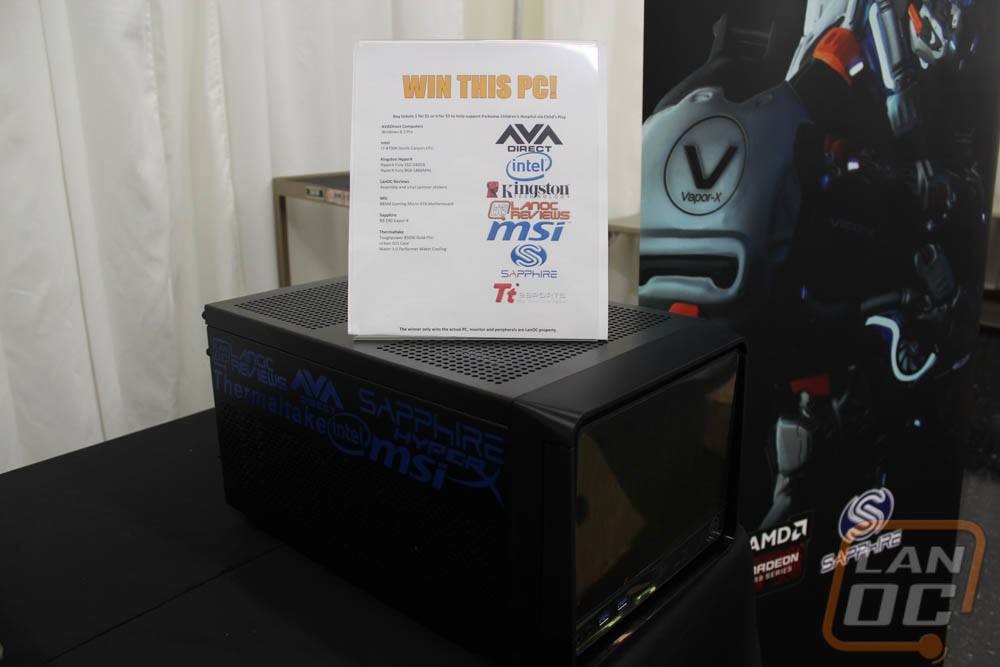 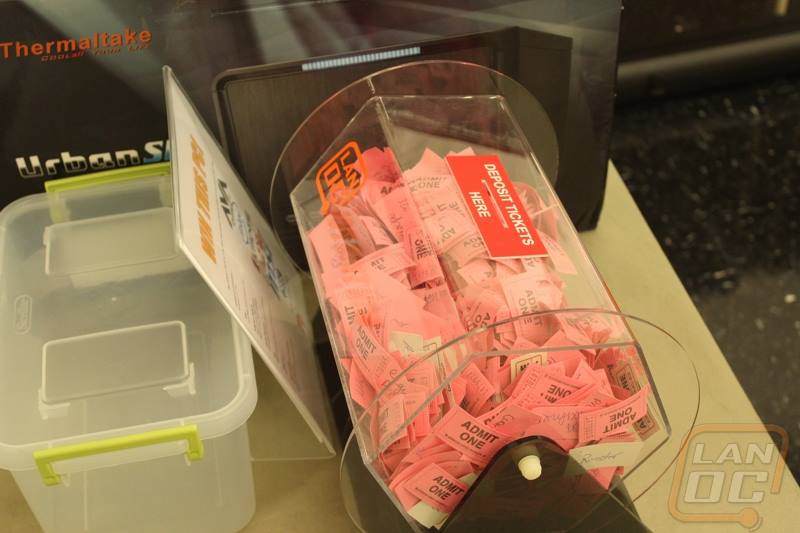 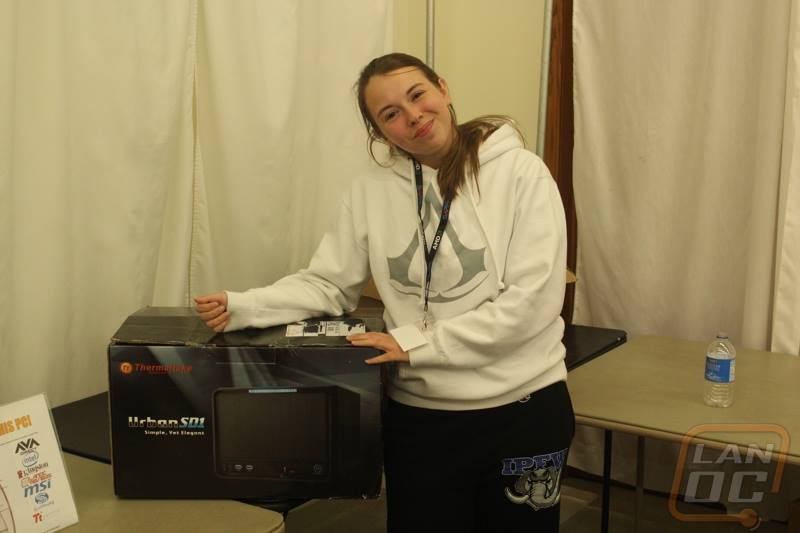 While discussing the charity PC build with the owner of our current venue, he had also mentioned that our local YWCA was in need of some computers for an after-school program. A previous arrangement had fallen through and they were unable to provide computers to children who would use them for homework, class projects, and even for adults to use to help find and apply to jobs. We were able to quickly drum up a few retired laptops from my workplace, and managed to get them re-installed and ready to go in time for the event. We are still on the look-out for any such computers, if you have a computer that you are ready to part with, please let us know, we would be happy to see if it can be donated to the YWCA for the same program, and help get it to that point. 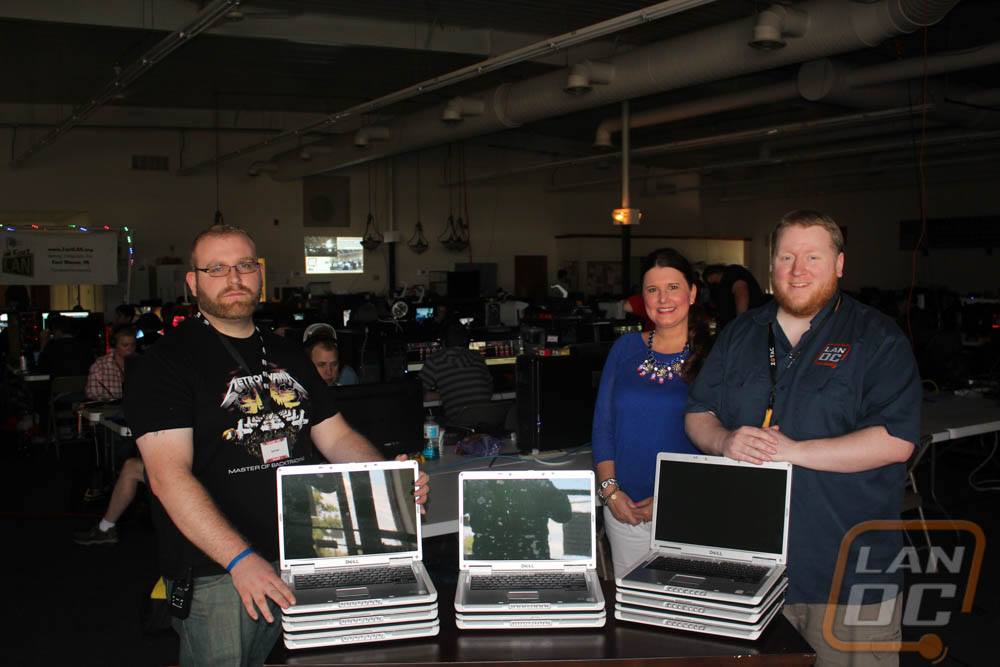 One of the coolest parts of the LAN was the opportunity to explain who we were to one of the board members of the YWCA, explain our history, and give her a tour of the event. She was completely awestruck, not an uncommon reaction when you aren’t used to seeing over a hundred gamers in one place. It was a great opportunity to see all of the games as well: Borderlands, Diablo 3, Payday, World of Warcraft, Smite, Battlefield, PvZ Garden Warfare just to name a few. Whatever the game was, we hope you had a great time, and we look forward to seeing everyone again soon. One final thanks to the staff, sponsors, and especially the gamers who make LanOC what it is. See you all in March! 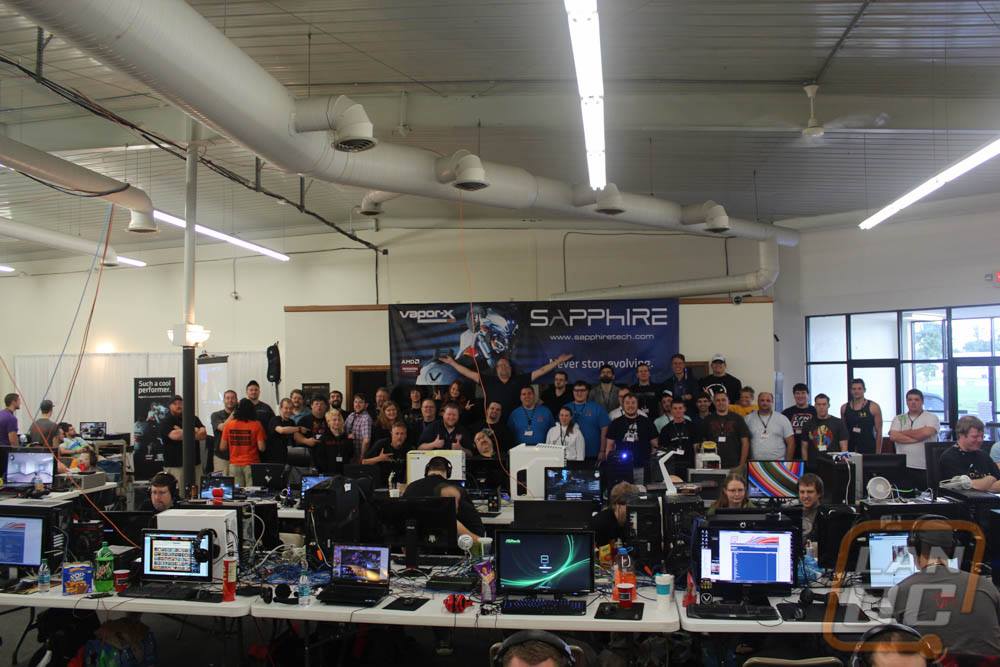 Author: Lersar
Contributing Editor / Event Staff
Adam is a big proponent of LAN parties, esports and speed-running, and helps organize our semi-annual LAN events. He has covered hardware and software reviews of a wide variety, but most content these days come from event coverage, such as other LAN parties.
Discuss this article
Log in to comment
Posts in discussion: LanOC v15.0 Recap

VaporX replied the topic: #35659 12 Sep 2014 18:08
Adam, Wes and everyone at LANOC, it was as always an amazing time to get together with other gamers and just have some fun. This is an awesome community and I am proud to be a part of it. Also thank you to everyone for helping to make Raymond's first LAN event something he will never forget. He is still talking about it and already asking if he gets to come back for the next one.