In the modern age, where smart phones are king, and people are constantly on the move, computers are getting smaller and smaller and everything is stored digitally. What happened though when you want to back up files from a tablet or mobile device and you don’t have a computer around to use. Well Plextor thinks they might have the answer. They have sent us a PlexEasy, a product that is used for the backup, burning, and sharing of most forms of digital media, all without the use of a computer. Join me as we explore the use of this unique device to find out if it is indeed the answer to our data transfer problems.

The first thing I noticed about the packaging for the PlexEasy is that it comes in a rather large box for how compact the device is supposed to be. Right away we can easily tell that Plextor’s colors are going to be blue and white. The box is covered with blue and white pictures and designs. On the front we can see the product name as well as a picture of the device sitting in the living room of someone’s home. Near the bottom we can see different pictures of people using their everyday devices. 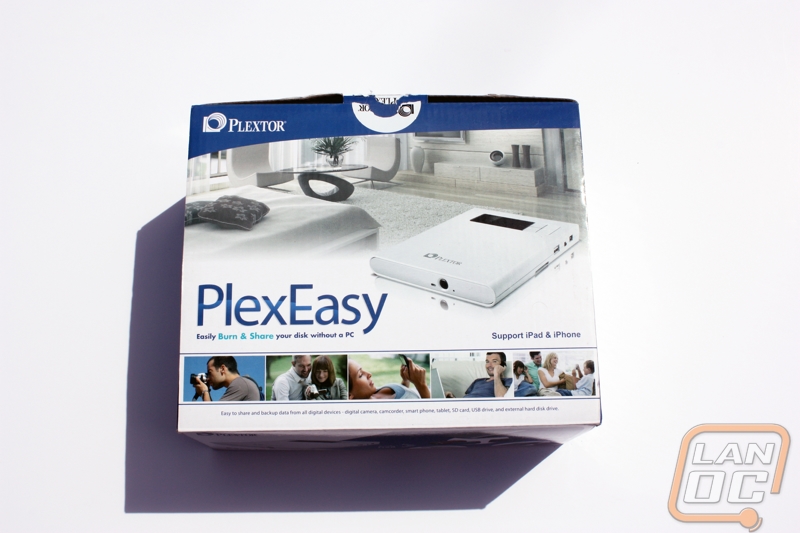 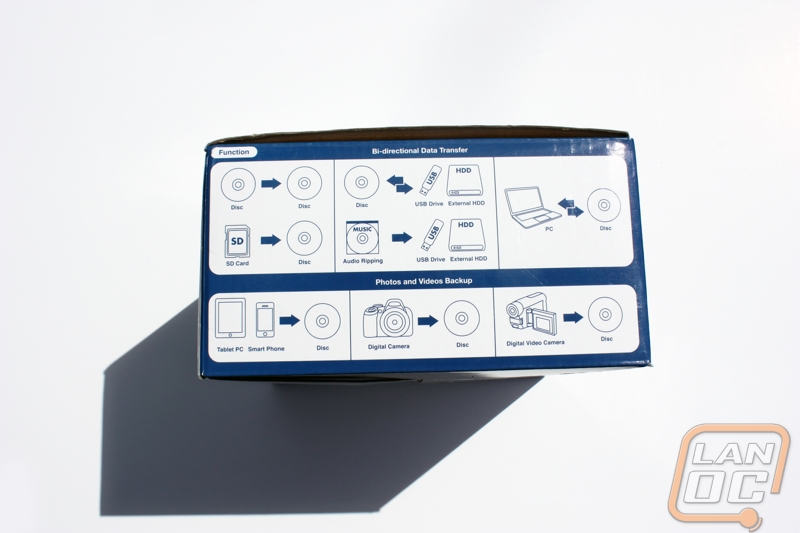 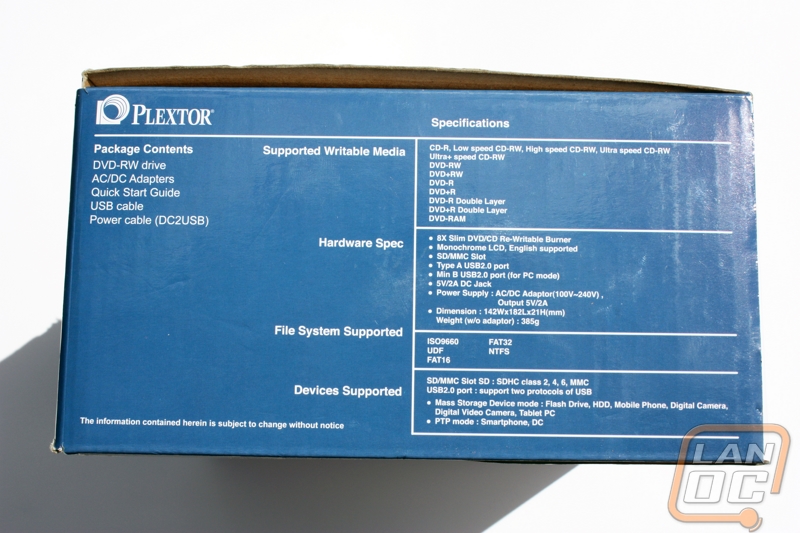 On the front of the box we get another look at the device itself, and many of the devices that it will work with. Also we get another look at the Plextor logo in the top left corner. Finally, on the back we get one last piece of information. It mentions that with this device data from digital devices is easy to backup and share. Even though there is only this one little piece of information, it is listed in at least twenty different languages which makes it seem like there is more information then there really is. 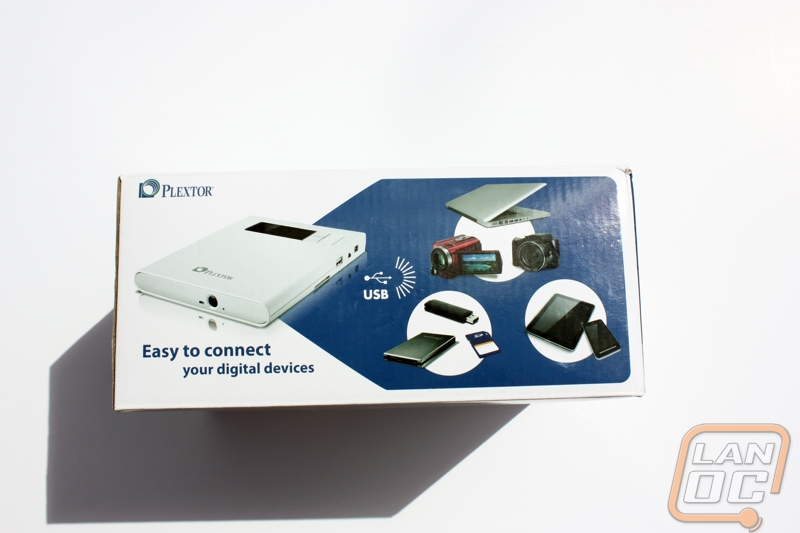 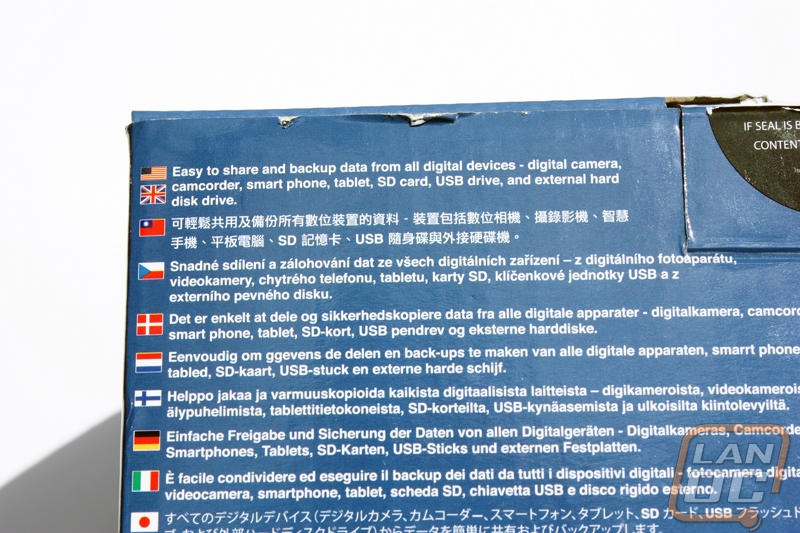 Inside we can finally see what we are getting our hands on. The first thing we notice is that the device is safely nestled into two Styrofoam shipping pieces and wrapped up in plastic. This is to keep the device from getting dinged or damaged during transport. Also inside we find a couple of wires, the first being a USB to power cable to give power to the device from a computer. The other is the USB to mini USB cable to actually hook the device up to a PC. Finally we have a standard AC power adapter so that you can get the device power if there is no PC to hook it up to. Lastly we find a few pieces of literature inside the box. First is the user manual, which is in more languages than I can count, making the book very thick for the amount of information contained inside. Also inside is the warranty information and a big chart of the LCD display information. 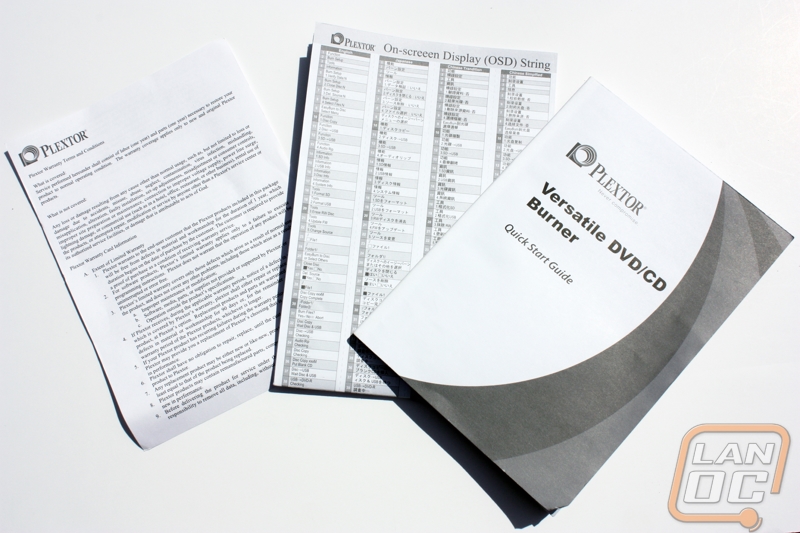 The installation process was very simple for either way you want to install it. Basically you have one of two options. You can either power the devices via USB, using either a computer, or external battery charger like the Power Fort from Cooler Master, or you can plug it directly into the wall using the power adapter that came with it. Once the device has power going to it we need to flip it on using the power switch on the side. 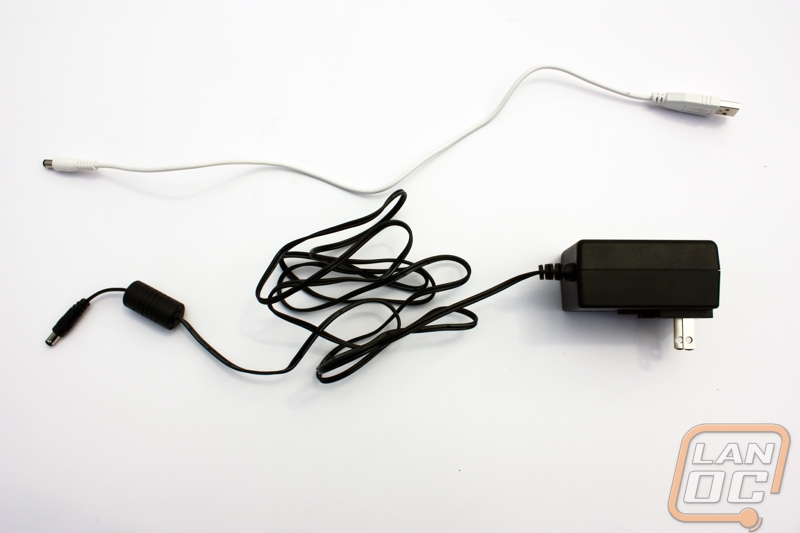 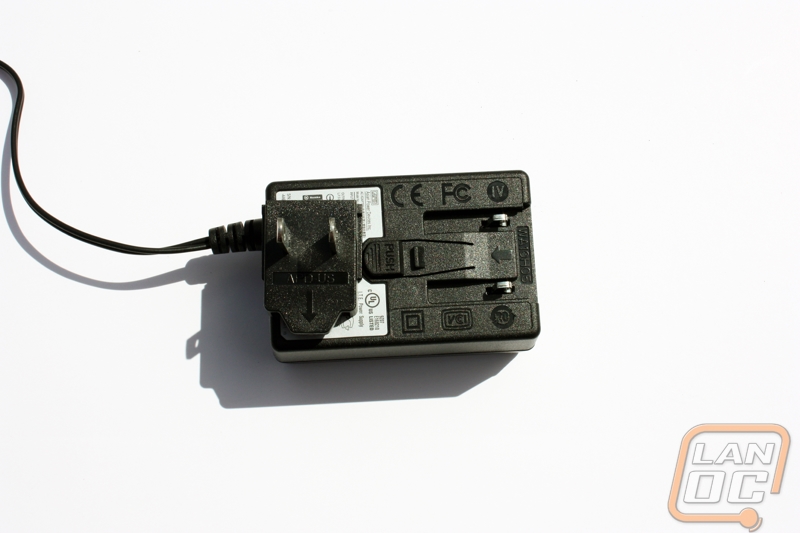 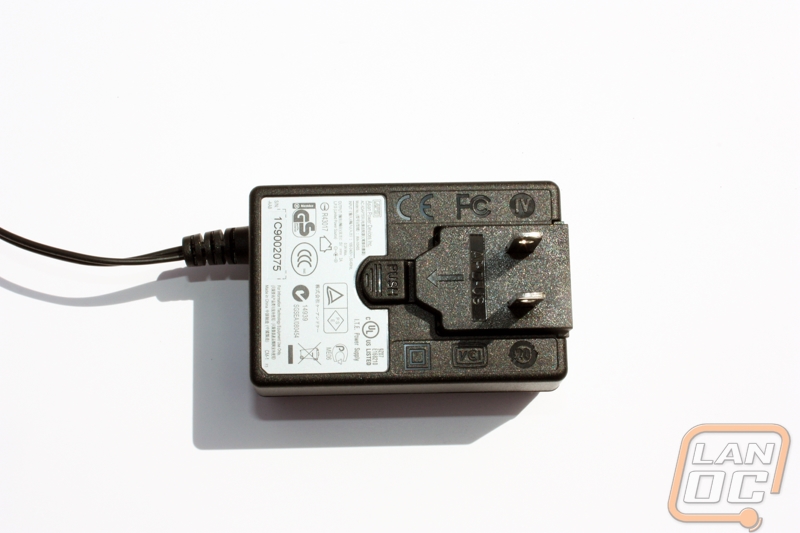 Once the device is powered on and ready to go we really need to decide what we want to do with it to continue the installation process. I will cover most of this in the next section, the only real installation we would have to do from this point forward is running a wire from the device to our computer or plugging in one of our many different media devices. 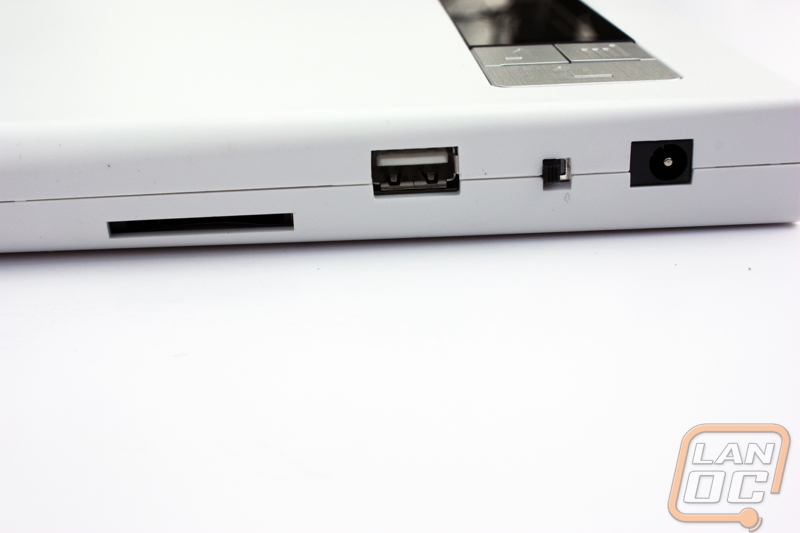 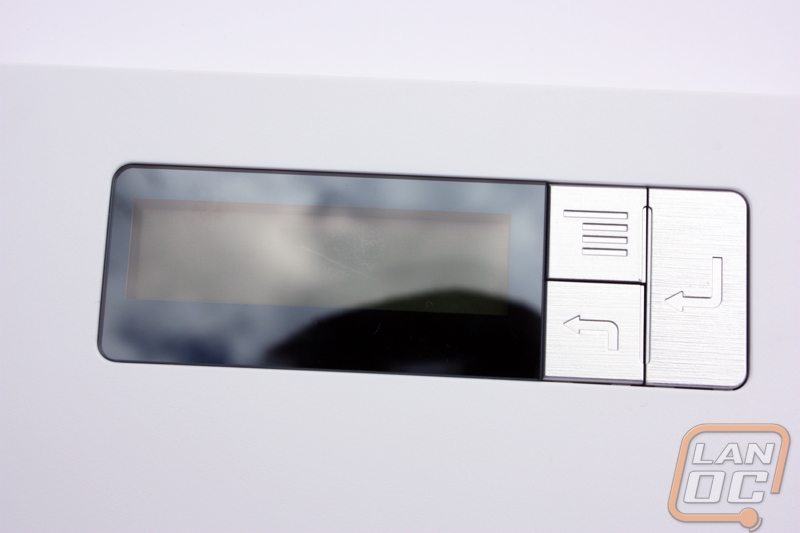 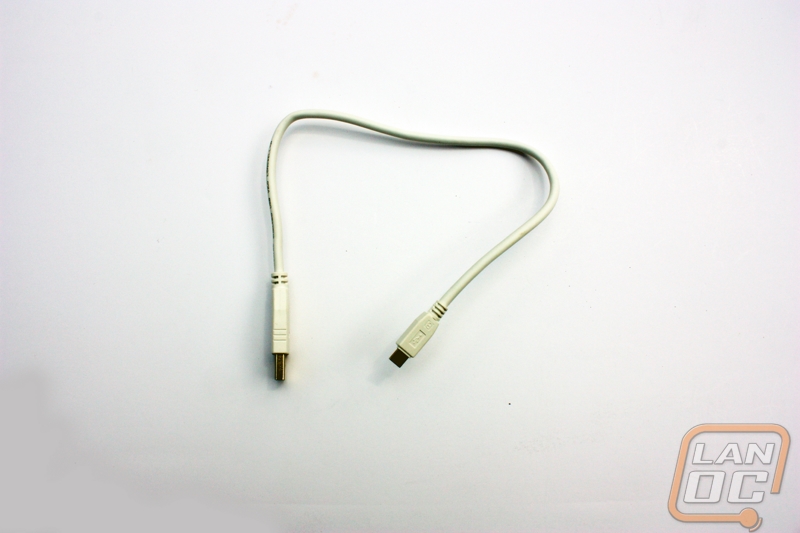 The first thing I want to touch on is a very minor detail but something that is nice to see added. Right away we can notice that the front LCD screen is backlit, which like I mentioned isn’t very major, but can be incredibly helpful when you are using the PlexEasy in the dark. It isn’t something you would normally think about and something that can certainly be taken for granted but it is a great addition to the device. 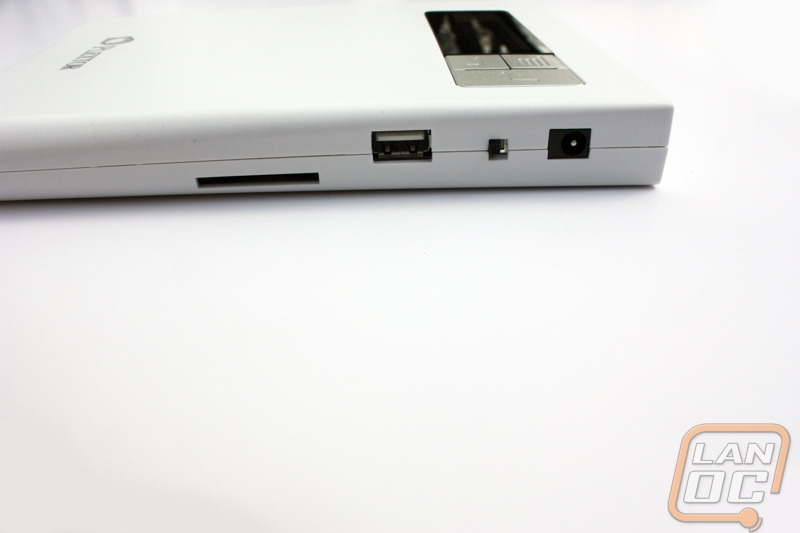 The first thing I tested with the PlexEasy was its ability to be used as a DVD drive. This is a feature that I really didn’t think about when I first got the product. I honestly wouldn’t have even considered it at all if Wes hadn’t said anything to me. It is pretty simple to use the device as a disk drive. Simply hook up the USB to mini USB cable to your computer and flip on the power and you are good to go. The device should automatically detect that it is hooked up to a PC and go into PC mode. It will then install any drivers needed to work on your computer and from there it is easy sailing. All disks inserted to the PlexEasy while it is in PC mode will try to auto play on your PC just like any other disk drive would. While in PC mode you can also use the drive to burn DVD and CD’s as long as you have some sort of burning software installed. It is important to note that while in PC mode, the USB and SD ports will not function. 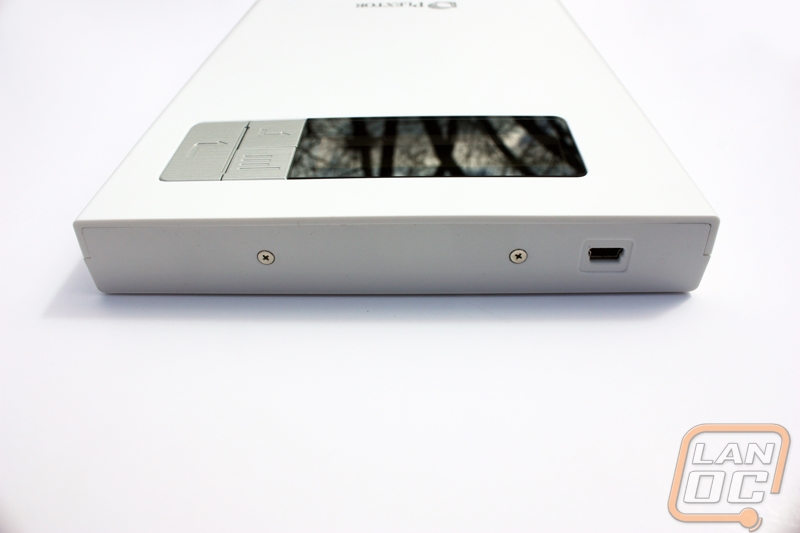 The copy modes all worked well that I was able to test. Going from SD to USB was seamless and quick once I found a USB stick that wasn’t a bootable drive, oops.  Copying about 115mb of data took only a minute or two and everything was stored neatly on the SD card. The root folder was called “sdcard1” and inside that, the rest of the data appeared just as it had on the SD card, using the same folder structure and names.

Copying from SD to a disc was also as seamless. It took a little bit longer to copy, presumably because it also had to burn the data. The data that appeared on the disk followed many of the same examples the data on the USB showed. Everything is stored in a root folder, this time labeled Sess#0000, presumably standing for session number that should grow as the number of burns grows. Everything burned perfectly and none of the data was corrupted.

I also decided to test the audio ripping ability of the device. I popped in a CD, Bon Jovi (don’t judge me, I didn’t have any actual CD’s and had to borrow one of my father’s.) and I got to testing. I selected the rip CD option and was off immediately. The data started transferring to the USB stick I had put in immediately. It took a bit longer than the other things I tested, but there was a bunch more data than previous tests as well as it being a more in depth process. 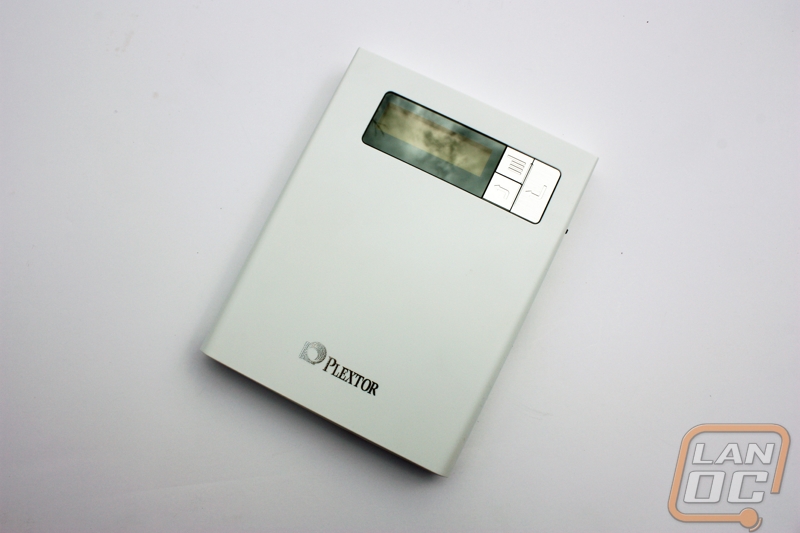 Unfortunately the device leaves a lot to be desired as far as USB transfer. You can burn data to a disc from USB, and you can move data to the USB from either disc or SD, but you cannot take data from USB to SD. In order to move data from the USB to an SD card, you would have to copy it to a disc first, and unless you want to have a disc copy of this data it is going to be a waste of a DVD or CD. I also experienced issues with copying data from my smart phone, though on the front of the package it says it supports ipad and iphone, and not specifically the Nexus 4 that I own. But I would still think that most smart devices should easily be supported. I thought maybe I was doing something wrong, but according to the very basic instructions I was doing everything as I should have. 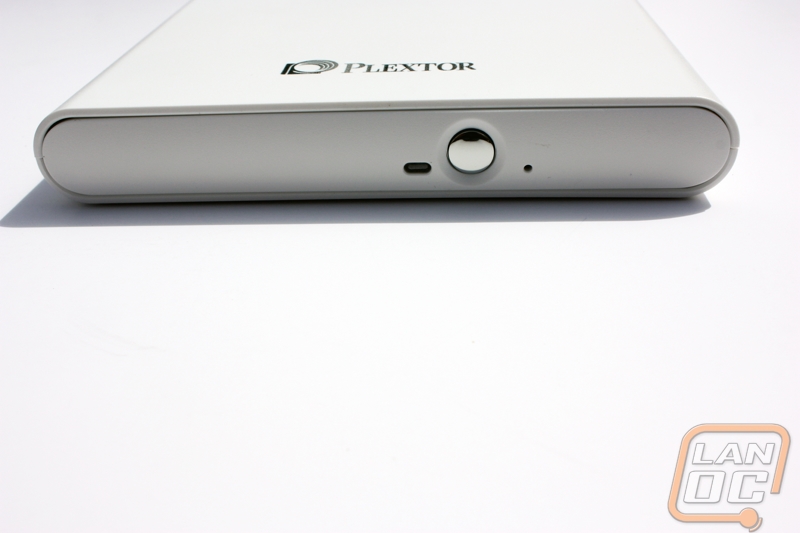 Finally I decided to test the disc to disc copying capability. In order to go disc to disc you must have a USB stick plugged in, which makes sense because the data needs a place to be stored between mediums. The copy process was again surprisingly quick, it only took a little bit longer than any of the previous forms of data transfer we tried, and again the data was entirely intact when we put the disc in for testing.

Overall I think the product works incredibly well. It transfers data at really good speeds and nothing was corrupt over the five or so different tests that I did with it. Its use as an external disk drive was perfect and could easily see myself using it for a netbook, or even as a replacement for an internal disk drive. However the lack of ability to pull data off of a USB drive is somewhat disappointing. I also feel like some of the features of the device are somewhat outdated or simply not needed.

That being said, there is one last point I want to make. The MSRP for the device is $130 and at that price I certainly wouldn’t recommend it, but that price does seem a bit dated and I don’t think I could suggest buying it at that price. It currently sells for $55 on Amazon and at that price I feel it is a completely different story. The unforeseen (to me at least) use of the device as an external disk drive, on top of all of the other features makes this product a good buy at that price. Most external disk drives will run you from $30 to $75 dollars, and this falls right in the middle of that price range, but you actually get more for your money. How much you would use any of the extra features is beyond me, but they are certainly there, and they all work incredibly well. 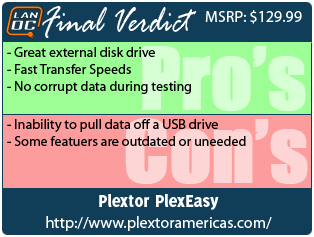 We have 741 guests and no members online