One minor detail I want to touch on right away that doesn't affect the performance directly is the inclusion of feet on the device. It is a minor detail, but it gives it a bit of room to stand off in case the device starts to get hot, and also the rubber base on them gives the device a bit more grip than the plastic coating that covers it elsewhere would. 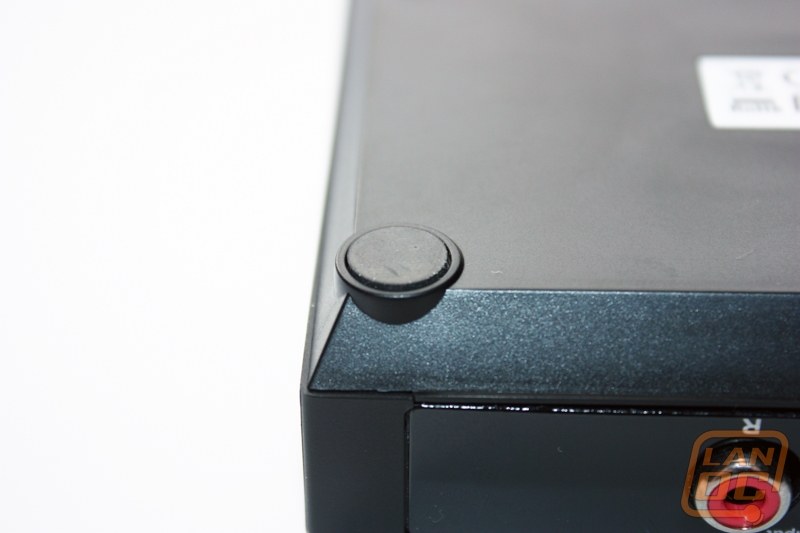 When capturing the video the process to get started is relatively simple. Once the device is hooked up and you go into the capture section it will automatically detect most settings for you. When the device and your gaming console have power, the preview box will display whatever is on your television, with a one to three second delay. You will also hear the same audio through your computer as you hear through your television, but this option can be turned off.

Once all of the basic options are set and you are ready to go it is time to decide what to do. First thing we need to decide is if we want to just record until we are done playing, or if we want to record for a set length. If we want to record a set length we need to select the appropriate box and set the capture time to whatever we decide on. Once we have decided on our method we can adjust the quality with the slider as well as decide where we want to save the video. We can also adjust the prefix for each video, meaning we can make custom names for each of our videos if we like. I like to leave this on default and it shows the date of the capture. This helps to keep track of when the video is from because all the days seem to bleed together any more.

With all of our settings set correctly we can start capturing video, and it is as simple as clicking a button. Once the capture starts, the button will change colors and say stop capture instead of start capture to let us know we are recording. We can also see the file size, how much space is left on our hard drive, and how long our current capture session is on the bottom left. This is an area where I ran into some problems. I am not sure what caused them, but it has happened twice now. While recording, the software seems to stop recording, and it is weird because the button still stays on, as if it were still capturing, but the time doesn’t go up and it doesn’t keep recording. The first time it happened I actually went my entire gameplay session thinking it had been recording. The second time I noticed it and was able to get a new session going. I don’t know why it happened, but it happened at least twice so it might be something to pay attention for.

Looking at the video I recorded the quality is great. The video is very smooth and identical to what I was seeing while I was playing. The audio is also identical to what I was hearing in game. I had no hiccups or stutters in the thirteen minutes of video that I recorded of God of War. The video by default saves as an m2ts file, which is new to me, but it opened up in VLC without any fuss and there was certainly nothing to complain about as far as the quality.

I think that it is important to note that the recording process is somewhat demanding on your PC. Not to the point of most games, but I doubt the Roxio would work some lower end systems, especially laptops. The box does recommend a 1.8 dual core processor and 2GB of ram, so it isn’t that surprising that it would be somewhat demanding, but I feel it is still important to note.

The other option we can choose to take part in the capture video section is Live Streaming. There are a few simple things we need to set up to make sure the stream runs smoothly. All of the options have preset defaults, but they don’t work on all network speeds, if you don’t have much of an upload at home, the presets will not work well for you. Once we adjust the bitrate and quality of the video, it is once again as simple as clicking a button. We click the blue live stream button and it asks us what our Twitch.tv username and password is and apparently the box does the rest. I’ve used OBS to broadcast before from my PC and the setup process was MUCH more complicated than with the Roxio. The Roxio doesn’t have as many options, but I wouldn’t expect it to since we are broadcasting console gameplay and not desktop.

The quality of the stream was also excellent. I have 5MB up so I was able to stream at a very good quality and bitrate which helped a bunch, but everything else was excellent as well. I was told by a few of my viewers that there were no hiccups in either audio or video and that everything looked great on their end. The one thing I did notice, which wasn’t really an issue as it was a peculiarity. While I was streaming I started to notice that my stream was getting more and more behind where I actually was in the game. It didn’t cause any issues with the video and everything still went smoothly, but the stream did end up about 45 seconds behind the actual gameplay at the end of my 30 minute session. It isn’t really that big of a deal for me because I don’t have many viewers, but for someone who is constantly interacting with viewers this may prove to be a bit of a pain if they have the issue as well.

The editing portion of the software is quite useful. You can choose to edit an existing production or start a new one. The coolest thing about the video editing portion of Roxio in my eyes is that it will edit other pictures and video as well, it doesn’t require that it be something from a Roxio device. So essentially you could take a video on your kid’s football game and go into the Roxio VideoWave and edit it for use elsewhere. The software includes all the features you would expect to see in editing software. We have options to add transitions, background audio, text or video effect, transitions and many more. We can also blend different clips or pictures together using the storyline at the bottom. Once our video is complete we can choose how we want to save it. We can save it directly on our computer in no time at all or we can choose to upload it to Facebook or YouTube. It does take a bit longer depending on your connection, but it is nice to be able to click a couple of buttons and for all of the converting and processing to be done for you.

One thing that I feel is a bit lacking with this device is the ability to grab screen shots. I am able to go into a production and grab a screen from within the production, but this always saves it in an 843 x 480 resolution which is much too small in my eyes. I searched high and low for another way to grab a screenshot or change the output resolution, but I was simply unable to find one which is a bit of a letdown. I will be unable to grab any good quality screenshots through the device itself for future reviews.