We here at LanOC love to go to LAN parties for obvious reasons. The LAN staff especially like to make it out to other LAN events so that they can kick their feet up and just enjoy fragging, friends, and fun rather than spending the entire weekend working to bring a great event to the attendees. This weekend a group of us made our way out to Fort Wayne Indiana to the Indiana Tech college campus for the very first FortLan event. With great excitement we hooked up our PCs in preparation for the 27 hour long frag fest that was to follow.

First up is the venue. Being right on a major college campus it was very easy to find. GPS took us directly to the main parking lot near the building. Without many signs pointing to the building itself it took us a minute to decide which it was being as there were a few buildings using the same parking lot. Once we were able to deduce that we were probably heading to the building that had a large group of cars parked outside of it. Once we went in it was immediately clear where we were headed. There was a sign at the bottom of the stairs saying “FortLan this way” and another at the top of the stairs turning us in the right direction of the registration. We were handed our name badge, lanyards, and raffle tickets after we signed the short novel that was the LAN waiver. Shortly after we turned in whatever canned goods we had brought for the charity raffle and were handed our appropriate number of tickets. It’s important to note that the registration process was handled by one person, or was at least when we showed up. It wasn’t an issue when we got there because people were still showing up at slightly different times, and there was enough time between attendees that a big line didn’t form, but I worry that if the LAN grows in size it will become cumbersome on the person doing sign up to keep the line moving while doing tickets, waivers, and the charity raffle. 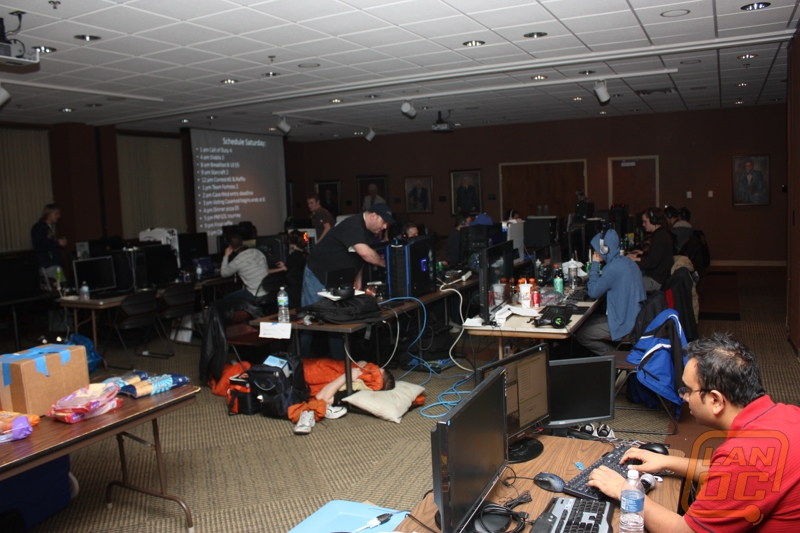 Once inside the main LAN room we found four rows of tables set up on either side of the room. The tables were set up in two pairs of two rows each. They were spaced in a way that allowed for movement on either side of the tables, but not in between. However, there was enough space so that the wires from power and the computers could easily drop down between tables and stay out of everyone’s way. I actually liked the tables being separated enough so that the cables could fall down between them. This added space also gave atendees plenty of room to lay down and take a nap if they fell victim to exhaustion. At other LAN parties they always seem to be put directly together and you either have to move them to make room for the wires or deal with them being all over the table. There was plenty of room on the outside edges of the room to get around and get from end to end to visit all of your friends. 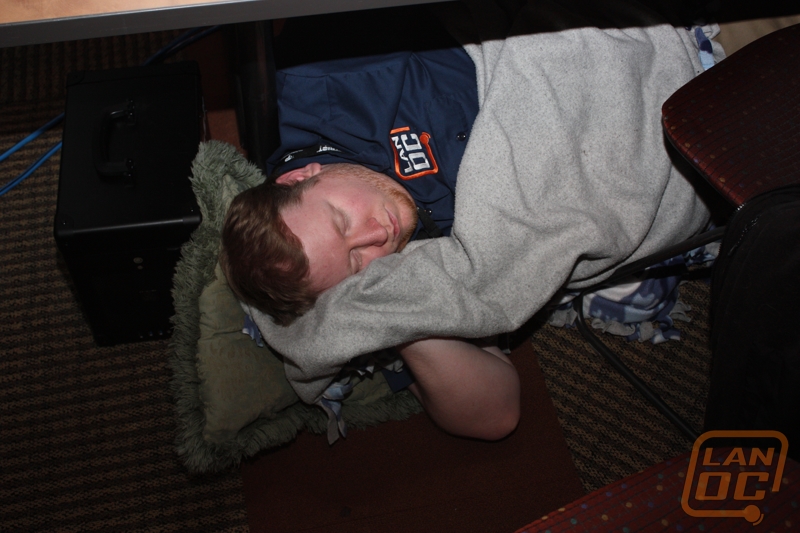 In the middle of the room there were a few tables set up. There were two set up at the front of the venue covered in prizes from the many generous sponsors. There was a table that was designated for community snacks and the many different sodas and energy drinks that were for sale. All money for drinks was put into a box using the honor system, and snacks were available to anyone who wanted something to nibble on. Anything that you had brought for yourself that you no longer want, or want to share with everyone were free to be placed on the table for all to have. The last table in the middle of the room is what I would call an admin table. The main switch and router was set up here as well as an admin computer and a couple of monitors to track the different tournaments that they were running. 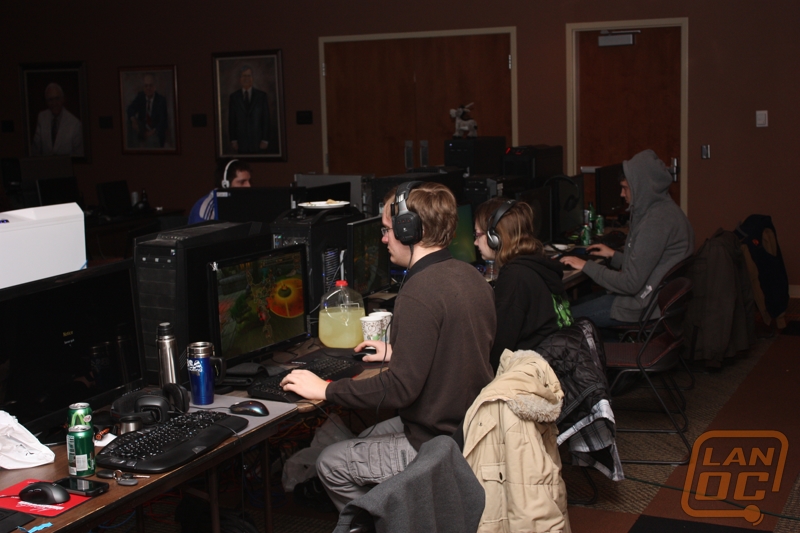 There were also two projectors running at all times and announcements being made constantly. The first projector was running Dirt 3 for most of the LAN. There was a racing wheel and pedals set up to take part in the time trial tournament. When it wasn’t running Dirt 3 it was either viewing or running a server for one of the many tournaments. The second projector had LAN information including the schedule, TeamSpeak information, and any vital tournament information. This leads me to the next thing I want to talk about which is tournaments.

We have 1536 guests and one member online